Home
Featured
Around the World: An Introduction

In December 2014 & January 2015, I took a trip around the world to the United Kingdom, Spain, Germany, Hong Kong, and Japan, thanks to US Airways’ wonderfully lax routing rules on their award redemptions.

I flew from San Francisco to London on British Airways in First Class, spent an evening in the city, then flew from London to Madrid the next morning on British Airways Club Europe (Business Class). I spent a full day exploring Madrid, then that night I flew to Palma, Mallorca, Spain on Iberia’s Business Class product. Palma was then my home for the next week. I took day trips around the island of Mallorca, hiking, eating, and drinking. From there, I flew on AirBerlin to Frankfurt, spent 1 night, then flew in First Class on Cathay Pacific from Frankfurt to Hong Kong. After a brief layover, I was off to Tokyo in Cathay’s Business Class. I spent the next 2 weeks in Japan. My 2 bases for that part of the trip were Toyko & Kyoto, but I also took day trips to Mt. Fuji, Kamakura, Miyajima, and Hiroshima thanks to the Japan Rail Pass. When my time in Japan was done, I flew on Japan Airlines First Class from Tokyo to Los Angeles, then finally American Airlines First Class all the way home, having traveled some 20,587 miles by plane. 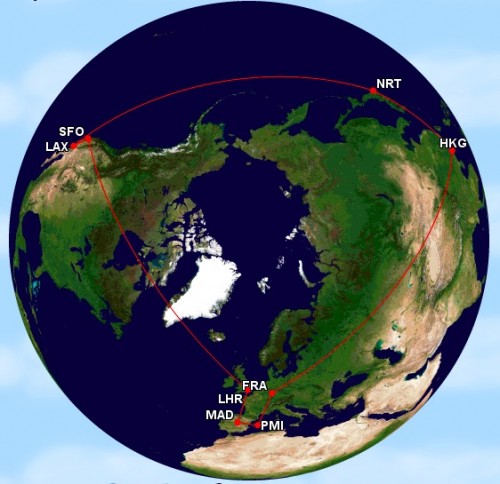 Now you would expect that all of these first class flights would be incredibly expensive, and they normally are. I priced out each leg when I made my award booking, and found that the same flights and premium cabin seats would have cost $27,147. While I would never spend that amount, even economy tickets on those same flights would have cost $5,147. Given the creative routing, a series of one way tickets would be necessary to achieve this itinerary. However, thanks to USAirways awards, my entire trip cost only 125,000 Dividend Miles, plus around $200 in taxes and fees. That’s a steal for all of this amazing travel! Not only that, I got all of these miles for pretty much free over the years thanks to USAirways credit card signup bonuses, spending bonuses on money I would have spent anyway, and other promotions. Unfortunately, the USAirways award chart, lenient routings, and credit card signups are now gone thanks to the merger with American Airlines, but I enjoyed them while they lasted. Below, you can find links to all of my posts from my trip. They cover everything from reviews of each airline’s premium cabins to hotel reviews to craft beer to trip reports from everywhere I explored. Enjoy & happy travels!