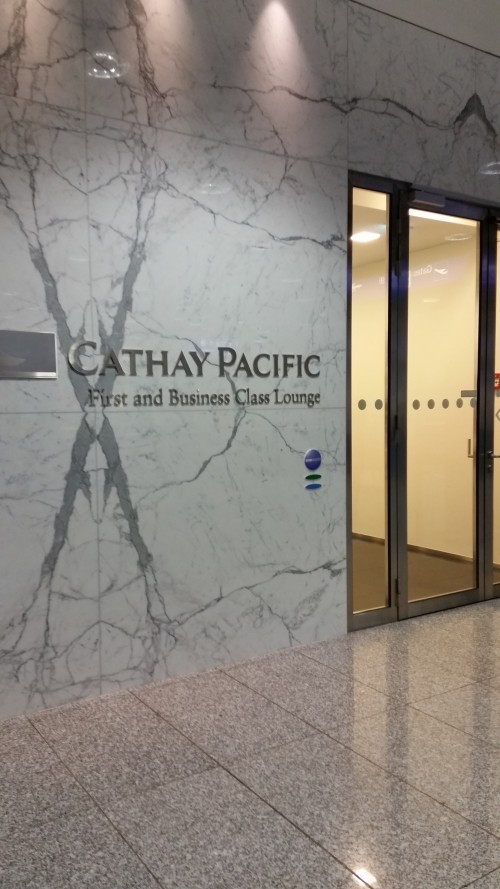 The Cathay Pacific First Class & Business Class Lounge at Frankfurt (FRA) is one of the more forgettable airline lounges I have been in. Of all of the lounges I was in on this trip, it was the least impressive.

I had flown from Palma de Mallorca to Frankfurt on airberlin the night before. It was the only leg of my trip that was in economy, but it was just fine. I did spend far too long in the Palma airport, which during the off-season is a cavernous building that has more birds than people inside. I spent the night at the Hotel NH Frankfurt Airport. While not in the airport itself, it was located a short shuttle ride away. On my shuttle back to FRA in the morning, I met a very nice couple who were in the middle of their own epic trip. They were on their way from Buenos Aires to Kuala Lumpur. We traded travel stories & wished each other a pleasant journey.

On this leg of my trip I was going to be flying from Frankfurt to Hong Kong in First Class (thank you, USAirways miles!). Check-in for the flight was easy. I just had to wait a few minutes until the check-in desk opened up, since I was there early. I didn’t have enough time to go into Frankfurt, so I had figured I’d head to the airport early to do some work. First Class & Business Class passengers on Cathay Pacific have access to the Cathay Pacific lounge in Frankfurt, as well as OneWorld Emerald & Sapphire members.

I was given lounge passes for my entire journey, then headed toward the Frankfurt Cathay lounge. I passed through passport control, but unexpectedly I did not have to go through security yet. The Cathay Pacific lounge in Frankfurt is actually pre-security, so be sure to leave yourself a bit of time to pass through. I didn’t expect the lounge to be huge. With only one flight per day, there isn’t that much demand. That said, I did expect it to be comparable in size to what British Airways has in San Francisco. Instead, it was the smallest airline lounge I have been in. Right near the lounge entrance there was a small business center. 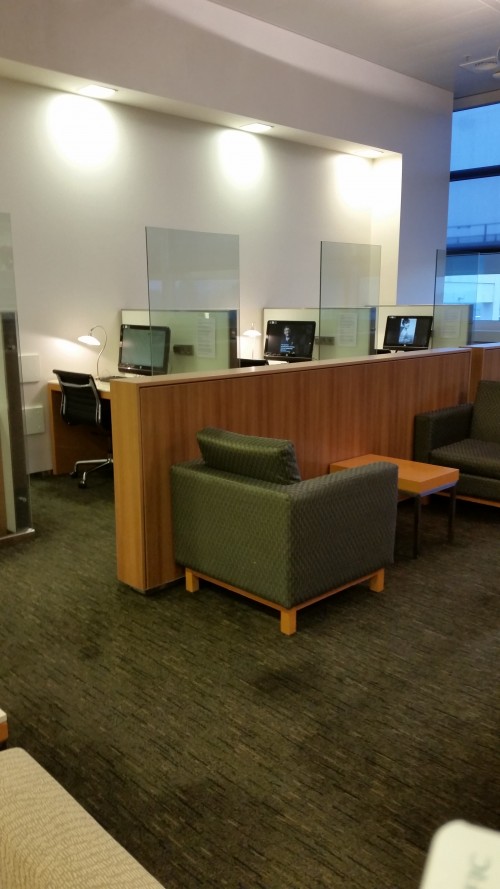 And here’s the rest of the Cathay Pacific lounge Frankfurt. 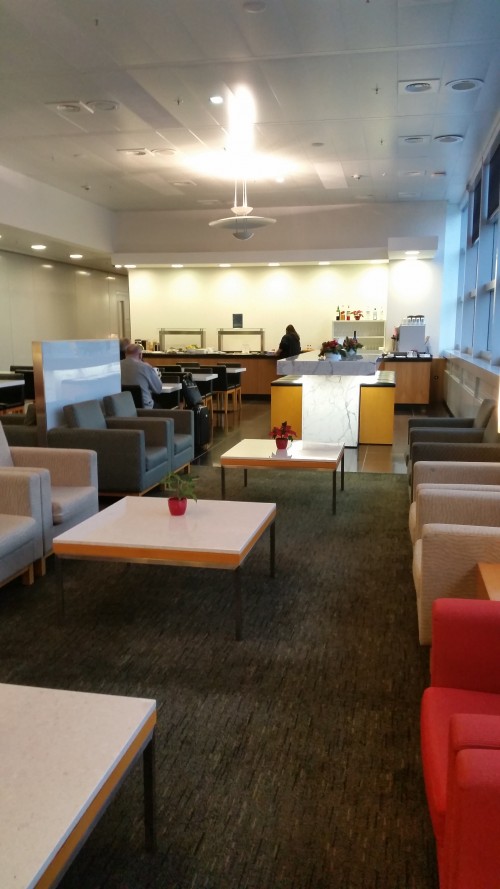 Yes, that’s it. You can see the food area at the far end. There are showers available as well, but having come from my hotel, I did not need them.

When I arrived in the lounge there was very little food available. There was a nondescript coffee machine, some liquor that was hardly top-shelf, and some juice. I had a couple of pieces of cake, since I hadn’t had anything for breakfast. 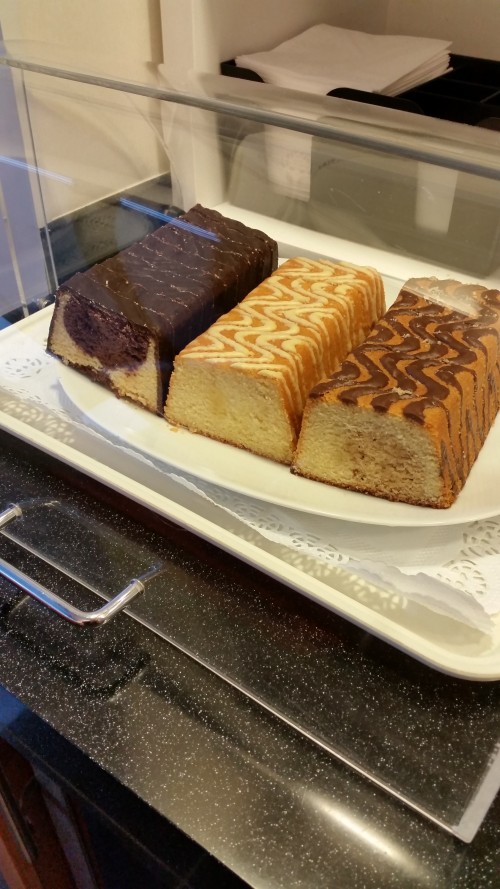 Later, some small sandwiches arrived, along with some BBQ potato chips, which I thought to be a bit odd. There was also some fruit and cheese. 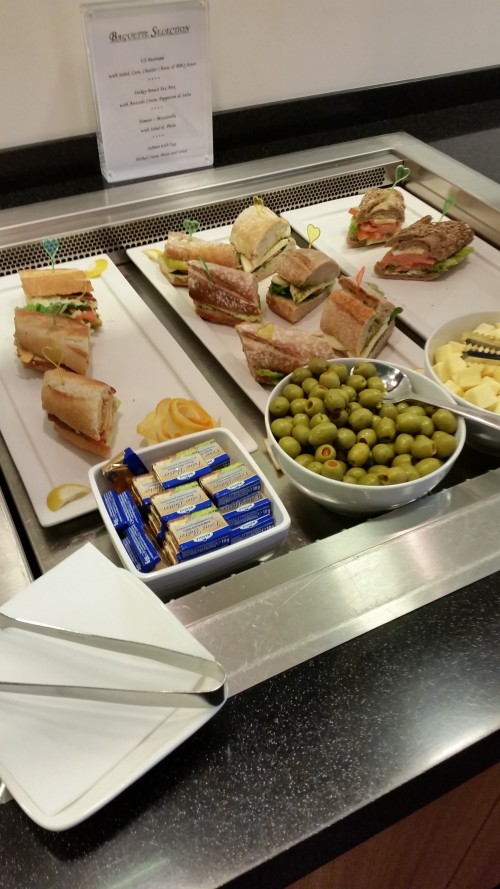 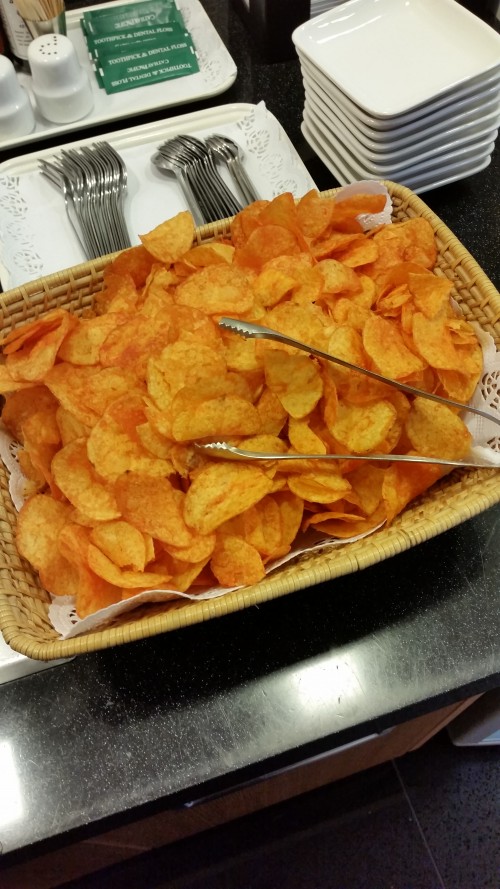 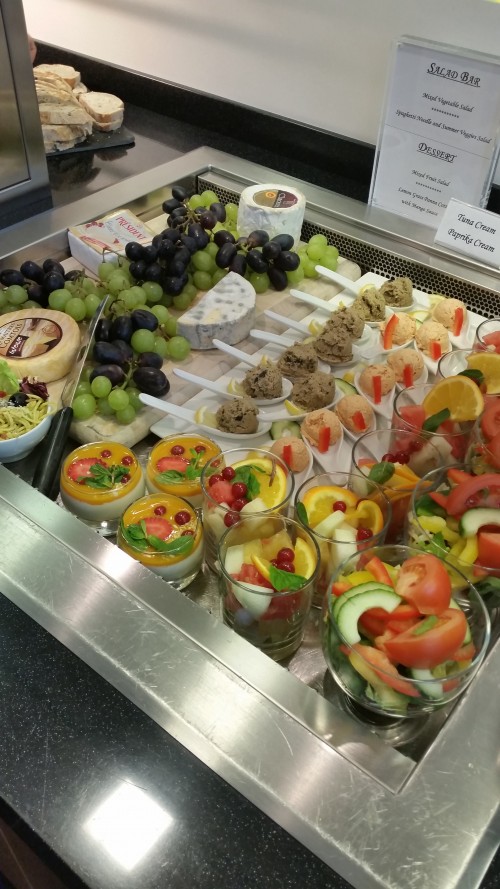 About an hour before boarding, the hot food area was finally filled. While it makes some sense that Cathay Pacific would wait until the lounge is busier, it was frustrating to sit there with very little food for a long time, only to suddenly have more options not long before I was to be eating a first class meal that I wanted to be hungry for. The hot food options were certainly eclectic. There were chicken wings, veggie tortillas, tuna tortillas, and beef empanadas. I have no idea why a Hong Kong airline departing from Frankfurt was serving mostly Spanish and American food in their lounge. 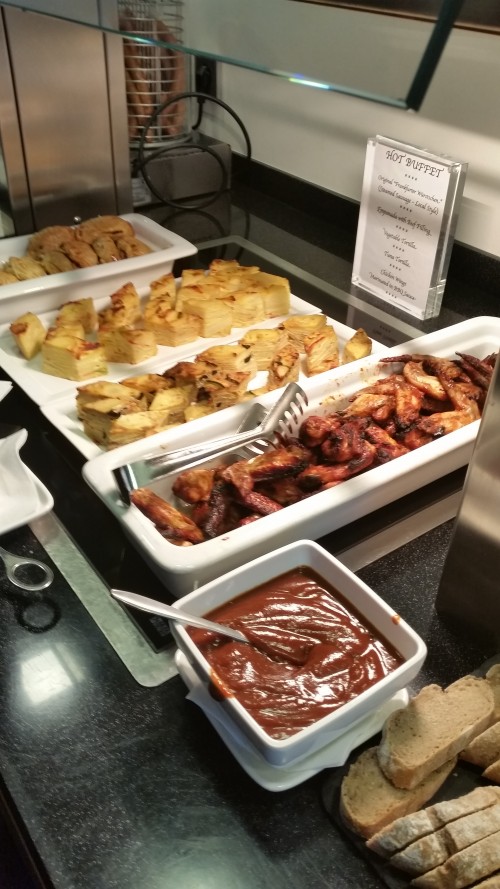 There were 2 more dishes available, both far more appropriate to the route. There were frankfurters… 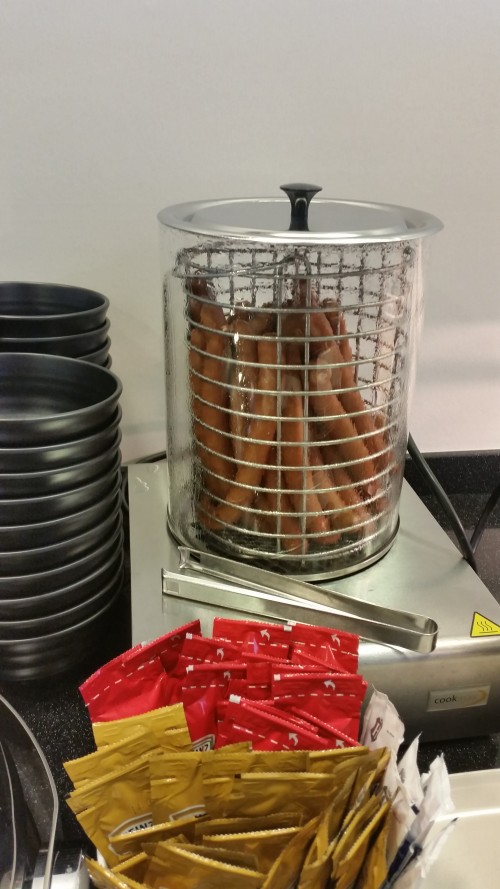 … as well as noodle soup. 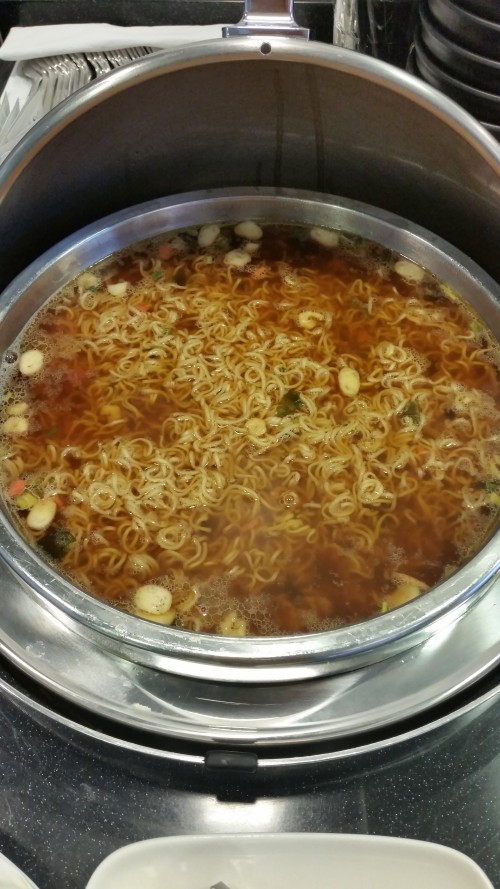 I was excited for my first trip to Asia, so I opted for a bowl of the delicious noodle soup. I figured it would be the least filling option, and hydration is always a good idea before a 12+ hour flight.

Considering how amazing Cathay Pacific’s lounges are in Hong Kong, the Cathay Pacific Frankfurt lounge can only be considered a letdown in comparison. While I wouldn’t expect the same level of a lounge as they would have in their home airport, I’d at least hope that they would do a bit more, even if it’s a small space. No matter, the Cathay flight itself would turn out to be the best I have ever been on. More on that in my next post…