Morioka is the gateway to the Tohoku region of Japan. In addition to being a great base for local day trips to Lake Tazawa, Hachimantai, Tono, there are three must-eat local dishes in Morioka, known as the three Great Noodles of Morioka.

These three Great Noodles of Morioka are all famous locally, yet their background demonstrates how many dishes are descendants of cuisine from elsewhere. As foods migrate, local twists evolve them to create something that ties cultures together. Not only are these three sandaimen noodle dishes delicious, the unique eating experiences associated with each one are fun.

Morioka reimen noodles are a bit different in a couple of ways. First, the dish is served cold. The noodles are also made from potato starch. Since the dish originally comes from Korea, there’s also kimchi involved.

But before you even get to eat Morioka reimen noodles, you’re likely going to have another course first, as reimen noodles are typically eaten with yakinuku (grilled meat).

My yakinuku & reimen adventure took place at Seiroukaku in Morioka. The restaurant took a little while to find, but then I realized it was on the 2nd floor of the building above the pachinko parlor. I used Google Translate to figure out the sign-in sheet, but there were only a few people ahead of me in line.

After being seated, I once again used Google Translate on the Japanese menu, until a server raced over with an English menu. As much as I don’t mind using my phone to translate, a proper translation is always a bit easier.

The Korean influence here is strong, as not only does reimen originate from Korea, the rest of the meal does as well, with Korean BBQ as the centerpiece. I opted for one of the Korean BBQ set meal options, which also included reimen noodles. The first course was short rib with raw egg, kimchi, rice, and soup. 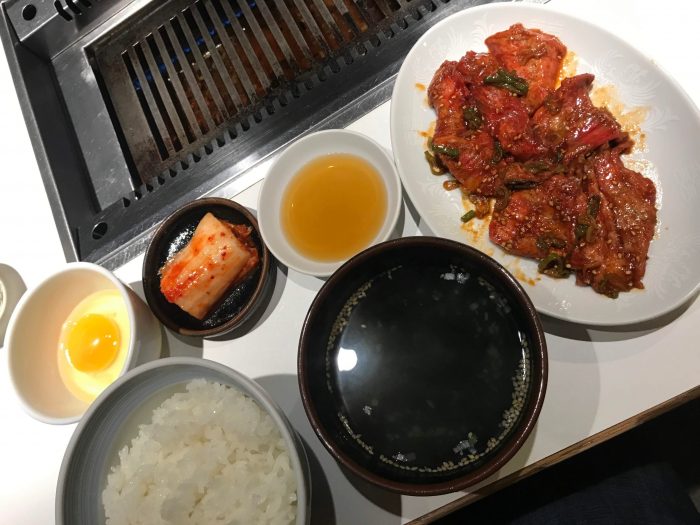 I grilled the raw meat, then dipped it into the raw egg while it was hot, followed by the sauce. There’s something special about meat that’s just been cooked seconds before. What goes with grilled meat? Whisky, of course. A refreshing highball pairs perfectly with the meal. 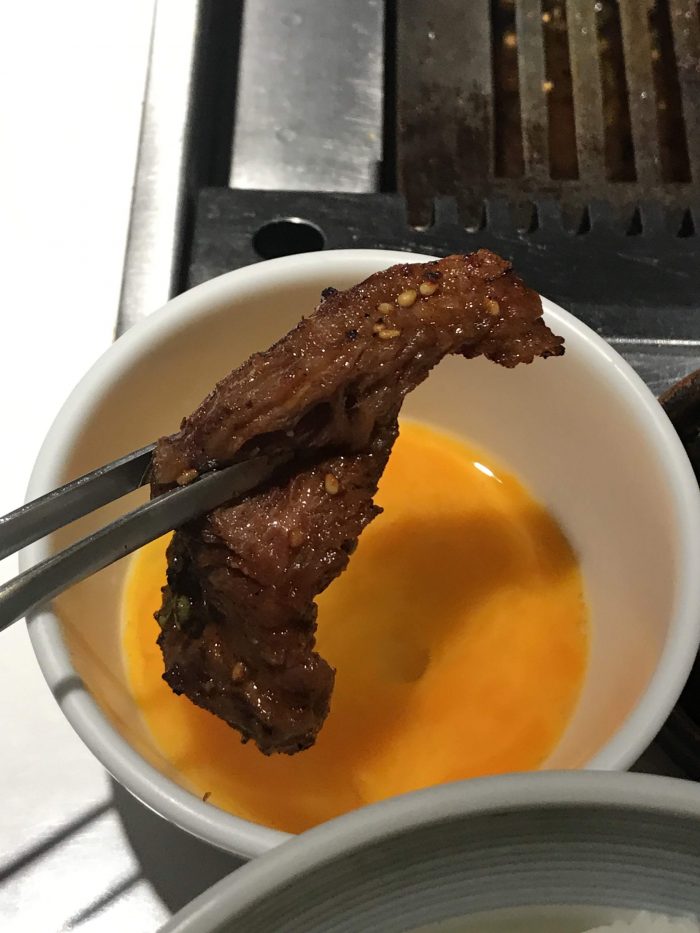 Then it was time for the Morioka reimen noodles! Admittedly, the BBQ had made me quite full, but the cold noodles served as a refreshing second course.

In addition to the cold potato starch noodles & broth, a reimen bowl includes half of a hard-boiled egg, kimchi, a chunk of meat, cucumber, and a piece of fresh fruit. Depending on the season, it might be watermelon, but this one included either pear or apple. 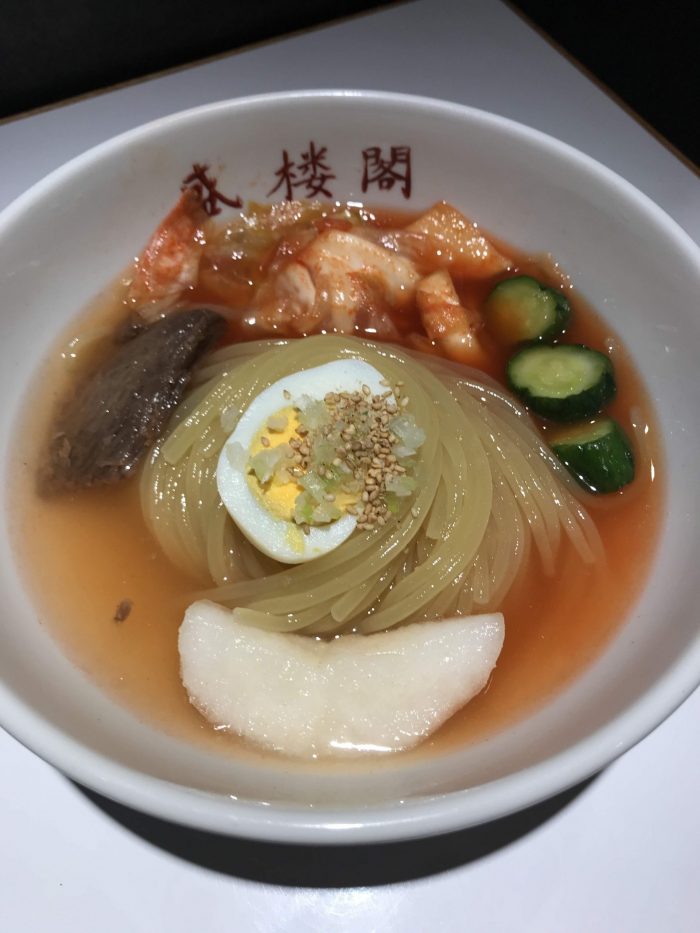 Reimen noodles are definitely on the rubbery side, but in this case it works since they are cold.

The broth was salty & slightly spicy. Depending on your taste, you can get reimen broth more spicy or less spicy. The salty/spicy balance worked well with the temperature. It’s a broth that could somehow almost work as a refreshing sports drink. Call me, Gatorade, let’s talk ideas.

At 3100 yen total ($29 USD), the meal was slightly on the pricier side, but it’s definitely filling as well as being a fun sandaimen experience.

The second of the three great noodles of Morioka is jajamen. This noodle dish is originally based on a Chinese dish known as Zhajiangmian. Jajamen noodles are similar to udon, but the sauce is where things start to get interesting. The noodles are topped with a meaty miso sauce, then other ingredients that can be added to taste.

For my Morioka jajamen experience, I went to Kazukara Jajamen. The restaurant was located down in a basement in the center of the city. Of all of the noodle places I went in Morioka, this was the most laid-back. The whole operation was run by one man, who greeted me as I entered, then came over to help with the ordering process. There were signs up in Japanese with instructions on how to eat jajamen. While it’s not difficult to order & eat this sandaimen dish, the tips were helpful, especially when it came to one particular part of the meal. I ordered the spicy jajamen with chashu pork, which cost 850 yen (around $8 USD).

While I waited for my meal, I looked around at the walls, which were covered in autographs from celebrities who had visited the restaurant. Most were entirely in Japanese, but one kind group added their band name to their signatures. As a result, I can now say I’ve eaten in the same restaurant as a Japanese metal band known as the Sex Machineguns.

My food didn’t take long to arrive. As presented, jajamen is not the most photogenic meal. This was not a popular post on Instagram. I have no idea why.

The 3rd of the 3 great noodles of Morioka: Jajamen! Jajamen is a wheat noodle dish with meat & miso paste that made its way to the region from China. They’re delicious, plus just before finishing, you can have a bonus dish. Get an egg & ask your server for “chitantan.” Broth is added to your remaining portion, and you’ve got a nice bowl of soup!

I mixed the miso in with the noodles, then added condiments. Garlic, chili oil, & vinegar were available. Since it was already spicy, I just added some garlic. Then it was time to eat. 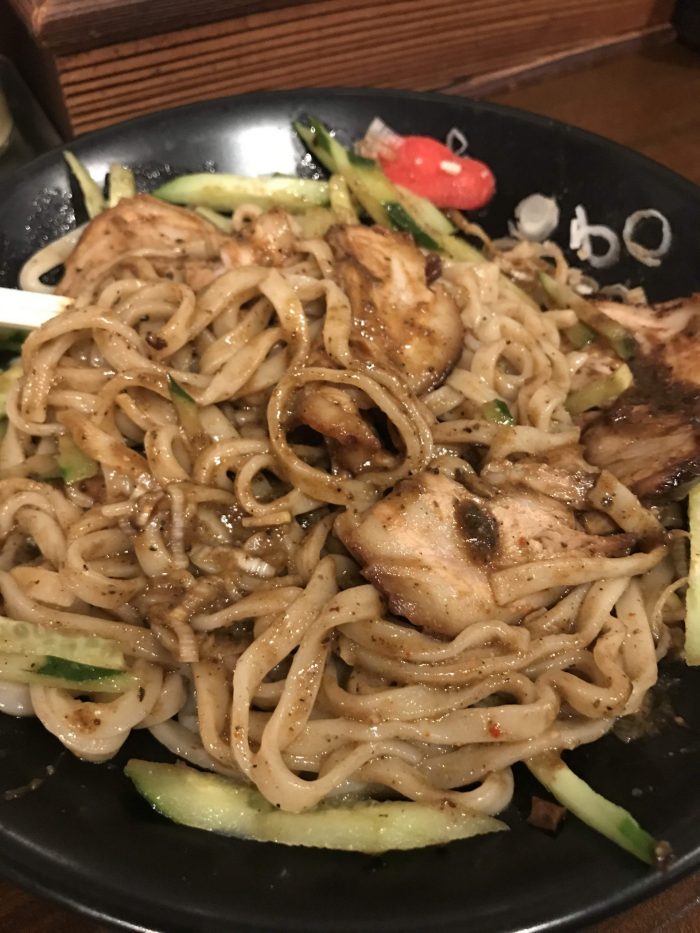 The rich miso sauce was a pure umami bomb. It ended up being one of my favorite meals of the trip, which is a tough competition in Japan. The jajamen was so good that I nearly forgot about the second part of the meal, but I stopped myself just in time.

Along with the condiments, there are also bowls sitting out, filled with uncooked eggs. For 50 yen, you can purchase one of these eggs. And then the magic begins. 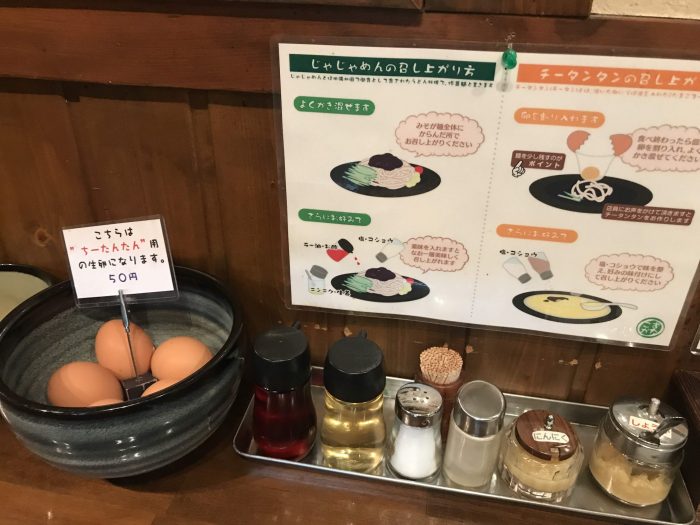 If you’ve had enough self-restraint, you will have left a bit of the meat miso sauce on your plate. Crack a raw egg onto the plate and ask your server for “chitantan.”  The plate will then be taken away into the kitchen, where the remaining mixture is quickly mixed with a bit of hot water. When it returns, you have your bonus course: a quick egg drop soup. 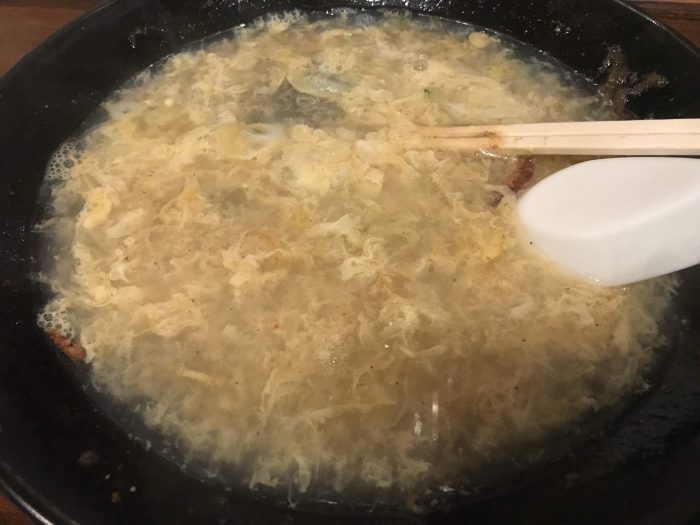 Not only is jajamen delicious, it’s yet another uniquely enjoyable eating experience – and who knows enjoyment better than the Sex Machineguns?

The final dish of the three great noodles of Morioka is wanko soba. While soba refers to the meal’s buckwheat noodles, wanko is the regional name for a small bowl. In the case of wanko soba, it’s not the food itself that is especially notable, it’s how you eat it. Don’t let the idea of a small bowl fool you; this is not a meal you stop in to have as a snack. Prepare your inner Takeru Kobayashi, wanko soba is an all-you-can-eat competition. You are brought bowl-after-bowl of soba noodles until you can handle no more.

For my wanko soba experience, I went to Azumaya. They have a few locations in Morioka, but I went to Azumaya Honten. The waiting area was filled with cats. Not real cats, but statues, which serve as the mascot of the restaurant. 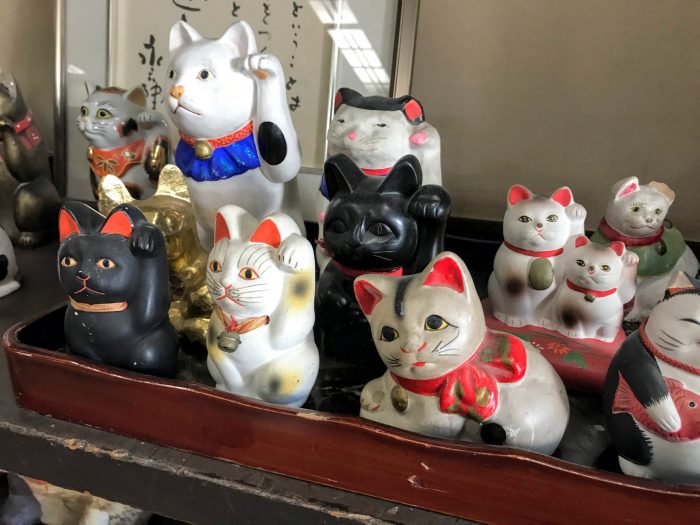 After a short wait during the lunchtime rush, I was led upstairs. This upstairs dining room is laid out in the traditional Japanese style, with seating done on the floor at low tables. Many, but not all of the patrons were eating wanko soba. I was there for one thing and one thing only: wanko soba. I opted for the deluxe experience, which meant that there would not only be more toppings included with the meal, but also that the total number of bowls I ate would be counted. Having not eaten any food all day, I was ready. 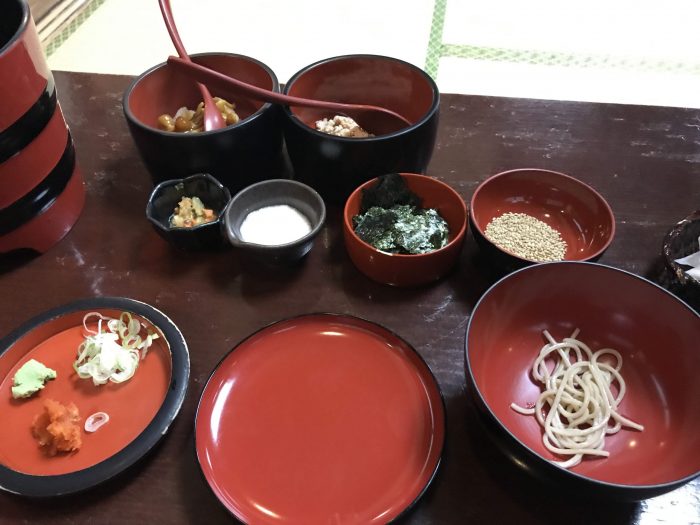 With instructions in hand and a bib around my neck, I had a goal. I wanted that tegata.

Servers head out from the kitchen with trays full of small bowls. Each small bowl has a tiny portion of soba noodles. Depending on how busy the restaurant is, one server will likely be covering several customers on each trip, dumping noodles from the small bowls into each personal bowl as the previous contents are finished. Most of the bowls have a mouthful of noodles, though some are slightly bigger or smaller. As you eat more and more bowls, you learn to cheer when you get a smaller one.

During the best times, there’s a good rhythm. If you get a server who has a full tray of noodle bowls & nobody else to serve at the moment, you can knock out 10 bowls in a minute or two. But eventually, each server needs to return to the kitchen to replenish, so there might be periods where you have to wait a bit. It’s not so much of an issue early on, but around bowl 50, I started to feel it, and I hit a wall around bowl 70. My goal of 100 bowls was in sight, but could I manage the feat?

I was sitting next to a group of American college students from Boulder, Colorado who were studying abroad in the area. They were a fun group, and it was helpful to have people nearby who I could join for mutual encouragement. Their personal goals ranged from the nice & reasonable (69) to the impossible (420).

I was motivated by the legendary eating competitions between Joey Chestnut & Takeru Kobayashi, including the annual Nathan’s 4th of July Hot Dog Eating Contest. There was no way I could let down my country while in the homeland of Chestnut’s greatest rival. I wanted both competitive eaters to be proud.

Pushing on past the wall, I found a good rhythm as the clacking stacks of empty bowls grew higher and higher toward the ceiling. 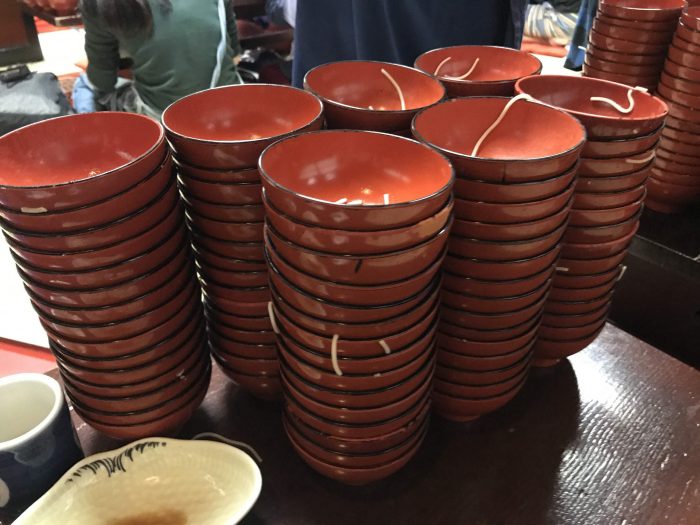 Finally, I could take no more noodles. My final wanko soba tally? 105 bowls!

After 40 minutes of noodle eating, it was tagata time. I was presented with a paper certificate as well as a wooden plaque. These are among my most cherished souvenirs. 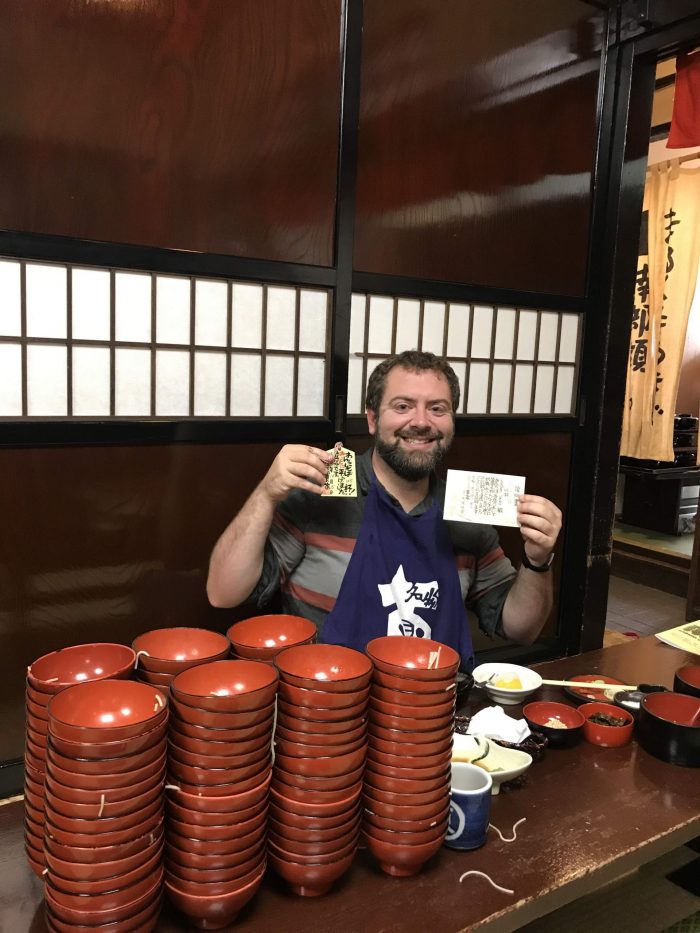 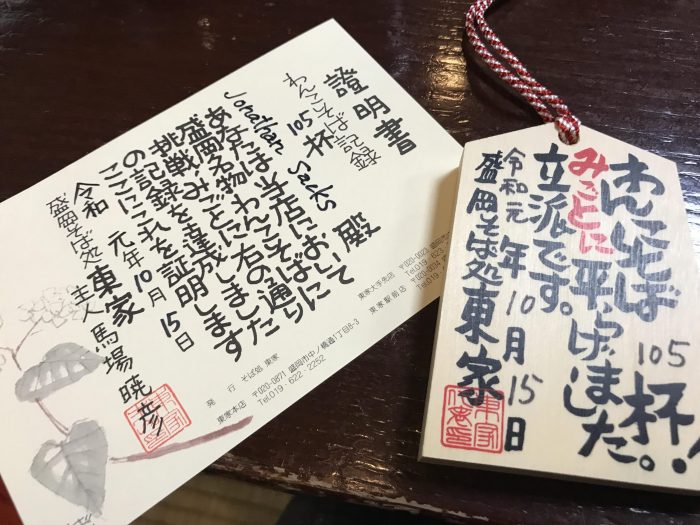 In case you haven’t enough by the end of this soba feat, you are given a tiny dessert. I ate mine while the students finished their noodle competition. A few of them also got to 100 bowls, which was fun. Getting to 420 might require some chemical assistance.

At 3520 yen ($32 USD), wanko soba is pricey for soba, but of course you get to eat so much food & have some fun with it. I recommend getting wanko soba with a group if you can, that way you can cheer each other on.

Have you ever had wanko soba? How many bowls did you finish?

I had fun trying all three great noodles of Morioka. The sandaimen each have their own unique dining experiences. The flavors of the cold reimen noodles were a balanced counter to the first course of yakinuku. The rich jajamen was easily a meal I could eat frequently. Wanko soba is perhaps not something I’d need to do again, but the competition element is fun. The area around Morioka is filled with beauty that beckons you to explore. When you’re back in the city, you’ll know you’ll be rewarded with great noodles. 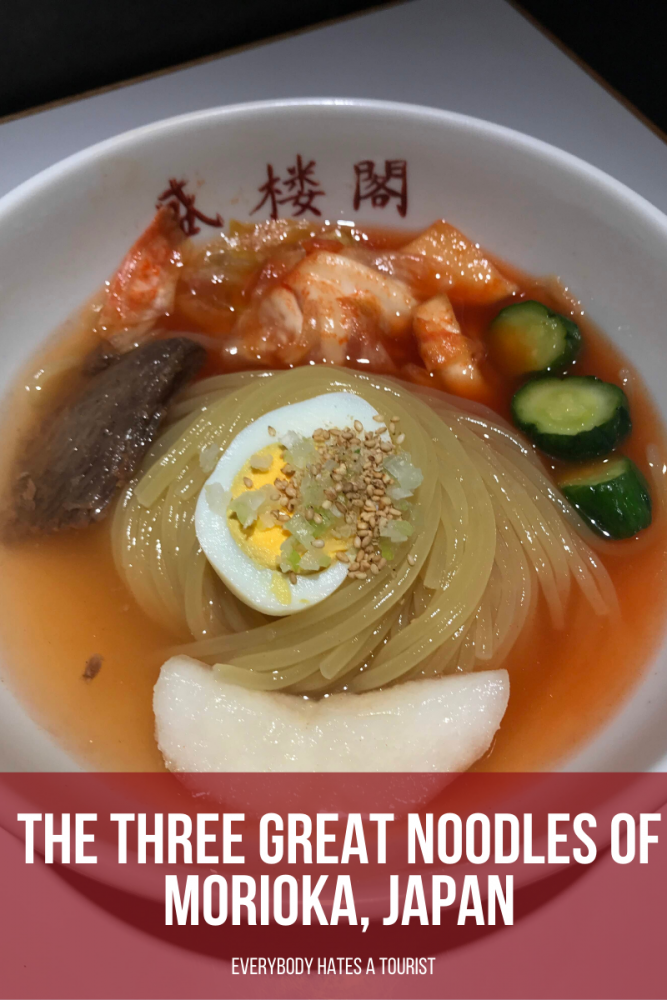