The weather wasn’t great for my final day of my first visit to Tokyo. It had been chilly up until that point, but clear. This day was rainy, but not overly so. Still, I was glad that I had planned ahead and saved plenty of indoor activities for the day. The theme of the day was technology & the future. I spent the entire day in Shinjuku.

A visit to the Toto toilet showroom in Shinjuku

My first destination was an odd one: the Toto toilet showroom.

By this point in my trip, I had become obsessed with Japanese toilets. Between heated seats, integrated bidets, and other fancy features, going to the bathroom in Japan is a unique experience.

Since the Toto toilet showroom was on the way from my hotel to central Shinjuku, it seemed like an entertaining way to start off my day. I headed for the Shinjuku L Tower, which is where the Toto showroom was listed as being located. As usual, Shinjuku’s lower levels & building entrances were a complete maze. I eventually found the L Tower and went to the floors that the showroom was supposed to be at, only to find no sign of them being there. I went through the hallways of both floors, only to finally encounter a sign that mentioned information that really should have been somewhere online.

The Toto Shinjuku showroom has moved to a completely different building halfway across Shinjuku. 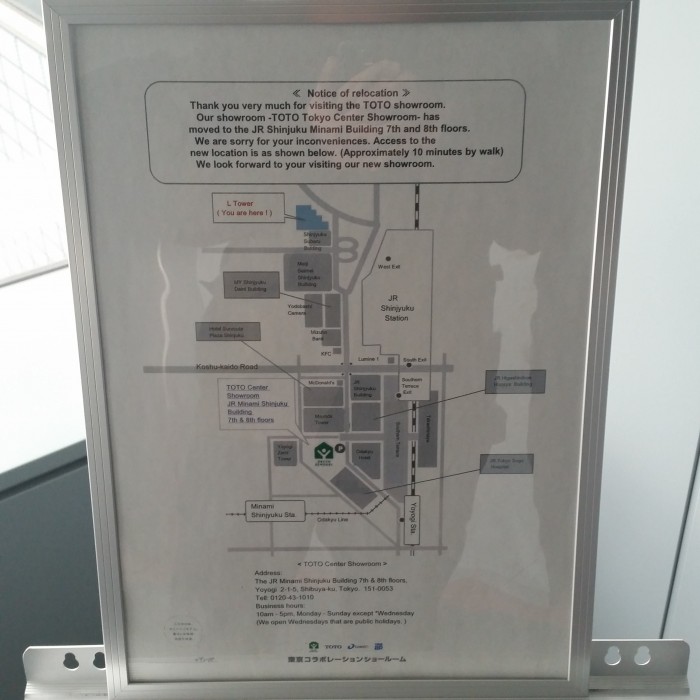 Checking back again today, most websites STILL have incorrect information listed. Hopefully this will help set the record straight: the new Toto showroom in Shinjuku is now located at the Tokyo Center, which is further south. According to the Toto site, the address is Shibuya-ku, Tokyo Yoyogi, JR Minami Shinjuku building, Shibuya-ku, Tokyo Yoyogi 2-1-5.

On my way to the new showroom, I opted for an early sushi lunch at a place called Mikore Sushi. As usual, I ordered based off a photo. The photo looked as good as the food ended up being, but I didn’t realize that the actual order included even more food. As a result, I ended up with the feast pictured below. So much good sushi! 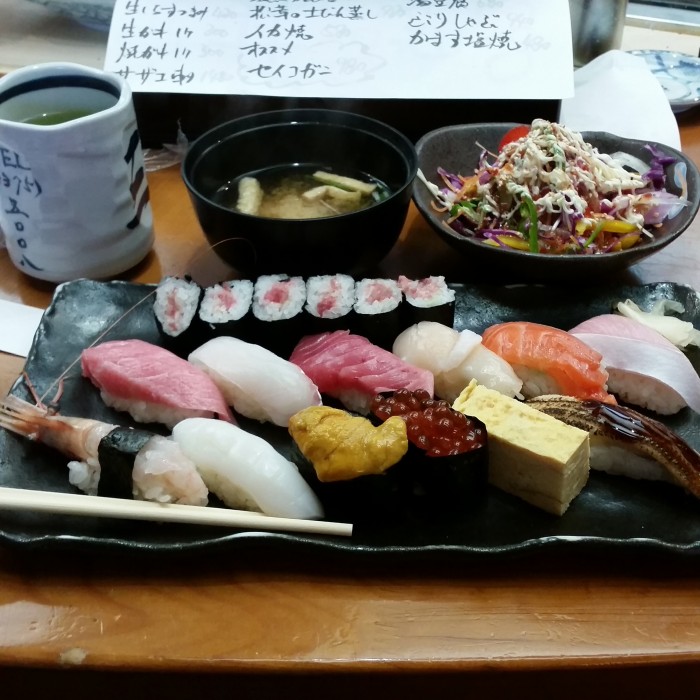 Belly full of fish, it was time to finally track down the new Toto showroom. My timing was good, as the expected rain was just starting. I found the building and ventured up to the floors where Toto is located.

I was warmly greeted in the lobby by Toto employees who gave me a map of the showroom, which takes up two floors. While the Toto store is of course there to sell fancy toilets, they get their fair share of travelers who wander in as well. Early on a weekday, the store wasn’t crowded, and I appeared to be the only one who was there to gawk at toilets and not buy anything. 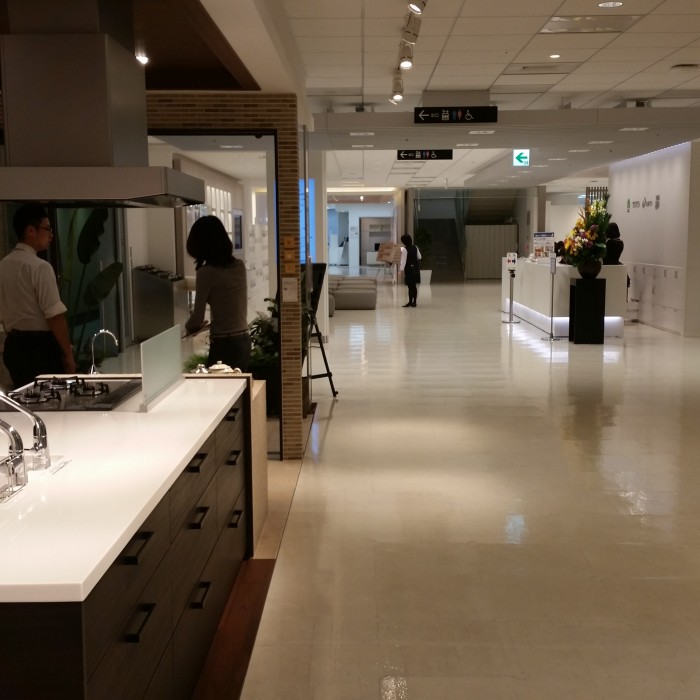 I walked quickly through the majority of the showroom, which is the regular sort of kitchen & bath showroom you’d find anywhere else in the world. I was there for one thing, and one thing only: the latest in toilet technology. 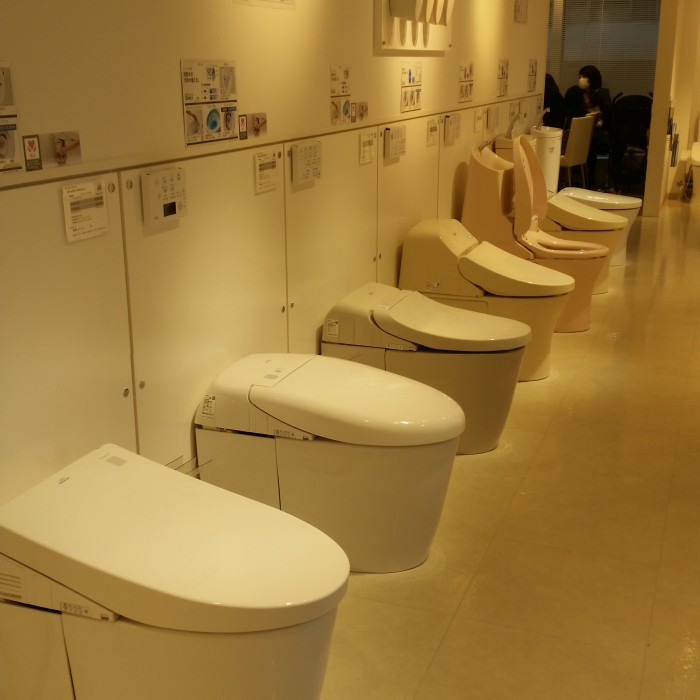 My favorite special feature by far was the automated lid opening:

I spent way too much time walking past various toilets, making them open and close.

The most expensive toilet was a mere 400,680 yen (approximately $3,339 USD at the time)  I feel like they could have knocked a few yen off of that to bring the price under 400k, but I’m not a toilet salesman. 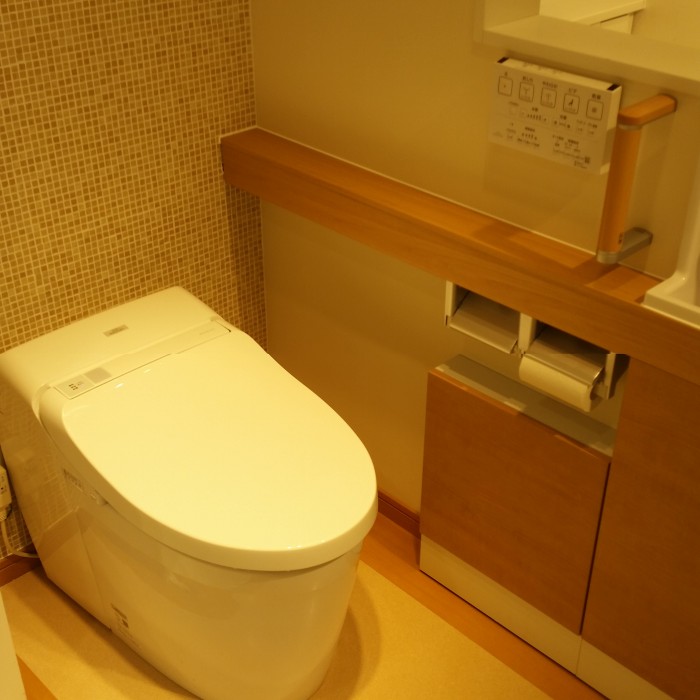 The Toto toilet showroom might not be at the top of many tourism lists, but it’s not far out of the way in Shinjuku, so it’s worth a quick 15 minute visit once you’ve become exposed to the glory that is the Japanese toilet.

After my toilet visit, it was time to experience another aspect of Japanese culture in the arcades of Shinjuku.

There are arcades all over Tokyo, which is not surprising considering Japan is the homeland of modern video games. Aside from the Xbox, nearly every video game innovation has come from Japan, from Nintendo and Sega to Sony to the latest in arcade games featuring dancing & music.

The first arcade I visited was Club Sega. It wasn’t too busy, since it was a weekday afternoon. There were people playing lots of games I’ve never seen before. Games using cards seemed to be particularly popular. 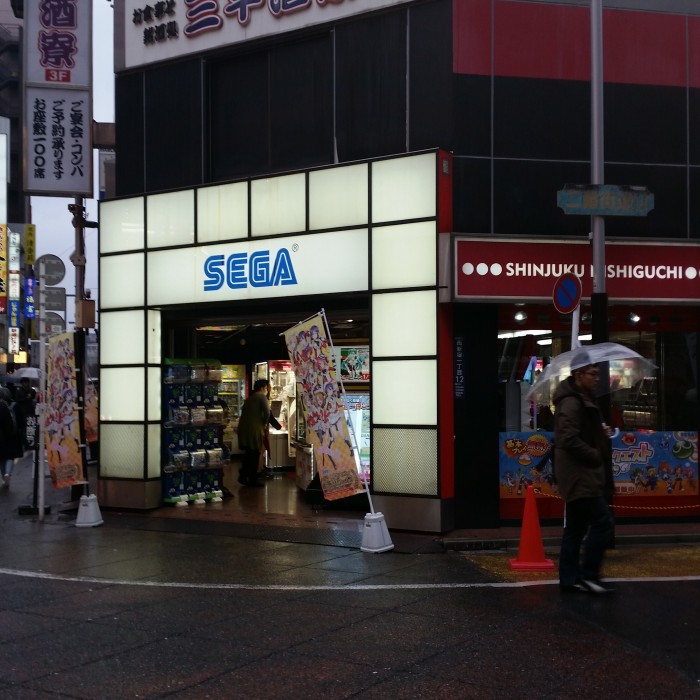 I don’t play video games nearly as much as I once did, so I was mostly interested in classic games as well as some of the more straightforward games I could pick up easily. If I couldn’t easily understand it by watching someone play for a minute or two, I would move on.

I played Gunslinger Stratos for a bit. It’s a third-person fantasy shooter game. It was decent enough, though I had no idea what was going on, mostly just shooting at things randomly and button-mashing until something cool happened. I’m also a big fan of driving games, so I played some Segadrive D8 Arcade Stage for a while. 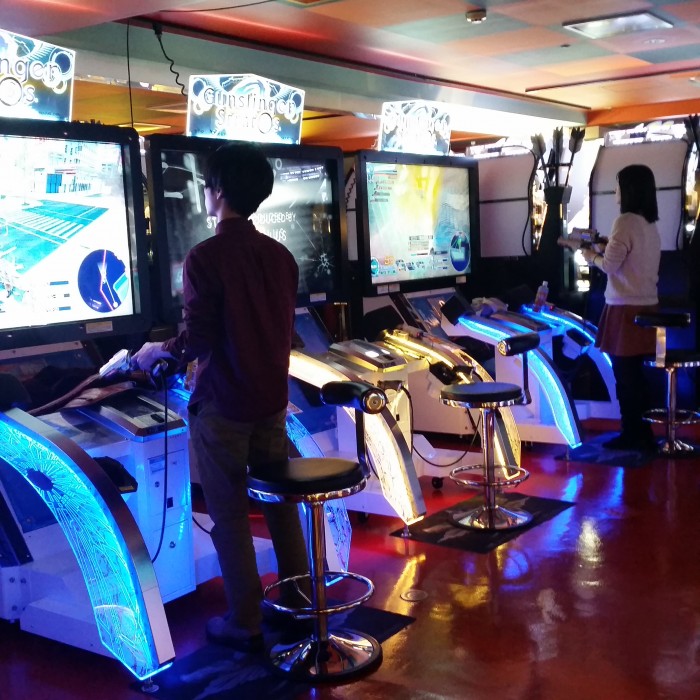 After that, I moved on to some classic games, including Street Fighter 2 and Tetris. When I left, I had the 3rd highest Tetris score of the day, which I was quite proud of. It’s also quite likely that only three people had played it by that point.

Nothing else piqued my interest at Club Sega, so I moved on to another, larger arcade, Taito Station Shinjukuminamiguchi Game World. 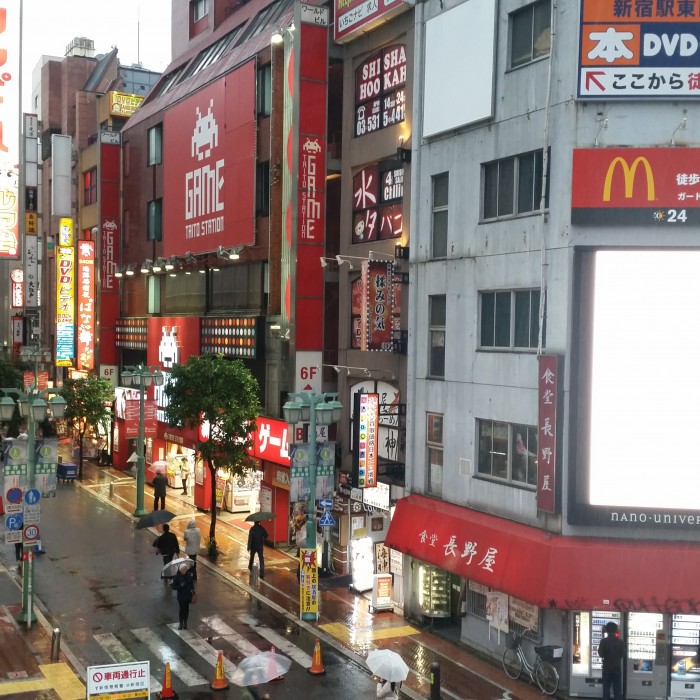 Taito Station is one of the higher rated arcades in Shinjuku, or perhaps even all of Tokyo. It was much brighter and welcoming than Club Sega, and had several floors filled with various types of games. On the ground floor, there were photo & sticker booths, plus the best driving game I have ever played before, Mario Kart. I spent a good while playing it. There was even a camera that would take your photo to insert you into the game as your character. 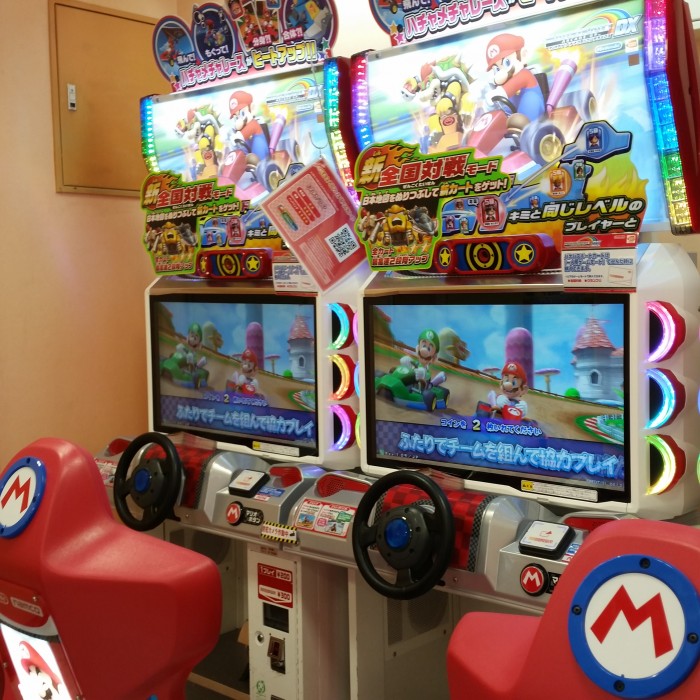 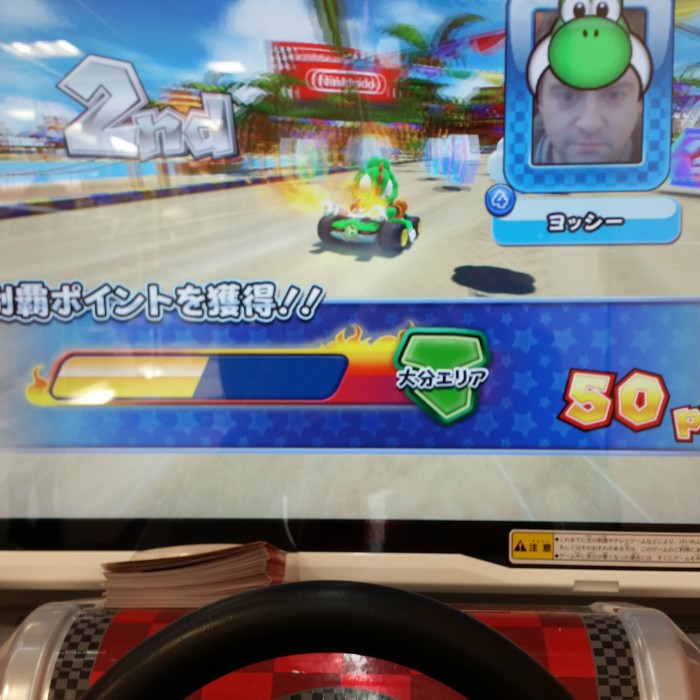 I then explored the rest of the building. I didn’t play much, but there was everything from horse racing & casino games to PC games. Again, there were a lot of games that I couldn’t even comprehend beginning how to play. While I would have loved to have stayed and played Mario Kart all night long, I needed to move on to my next destination, as I had reservations for a specific time.

A visit to the Robot Restaurant in Tokyo

My entertainment for the night? Tokyo’s famous Robot Restaurant.

It’s not cheap (they just recently increased their prices to 7,000 yen), but you can find discounts for booking online, or ask your hotel, or ask someone who is just coming out of a show if they have a coupon (they give you a discount if you want to come back again). I’d recommend skipping the actual meal, as I have heard it’s a nondescript bento box, and it will only distract you from the full show. Instead, just get yourself a cold beer and sit and watch. Photos are allowed, though flash photography is not allowed. This is unsurprising if you have ever seen The Simpsons.

I could easily take you through the entire show if I wanted to ruin the spectacle, or if I had any real idea of what was going on. Instead, here are a few photos. 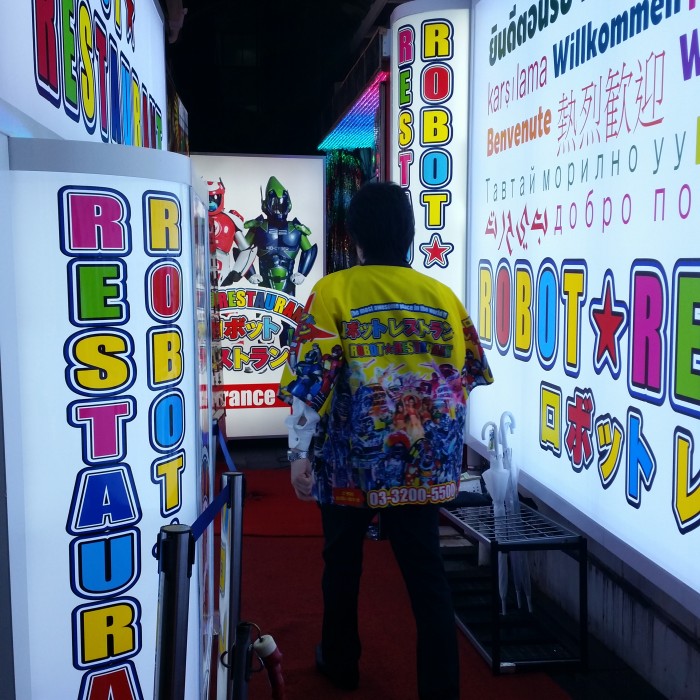 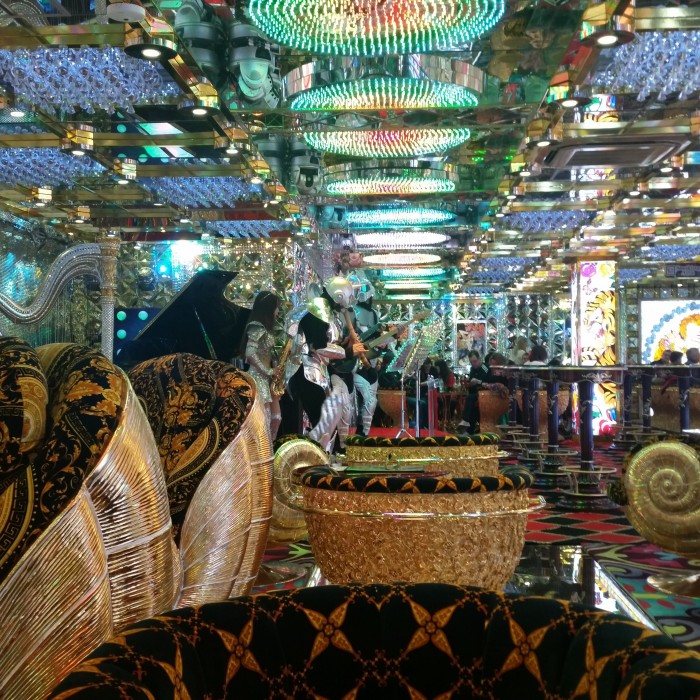 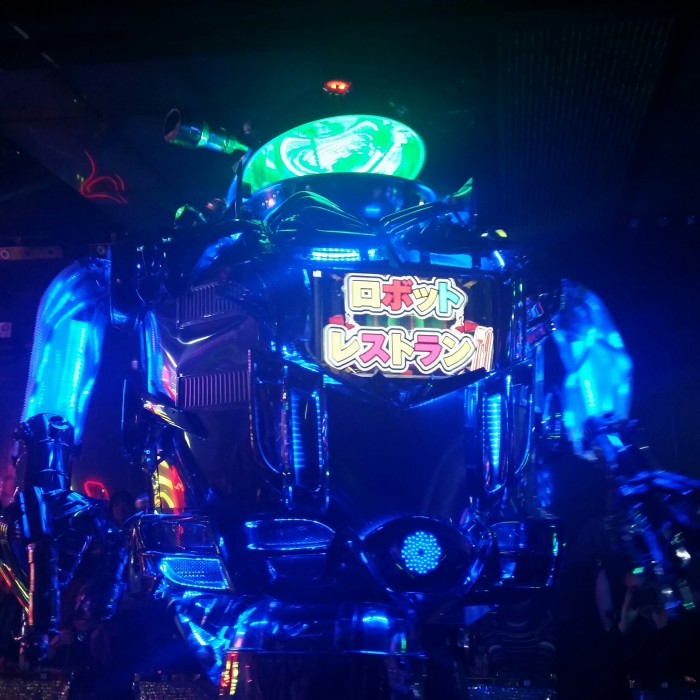 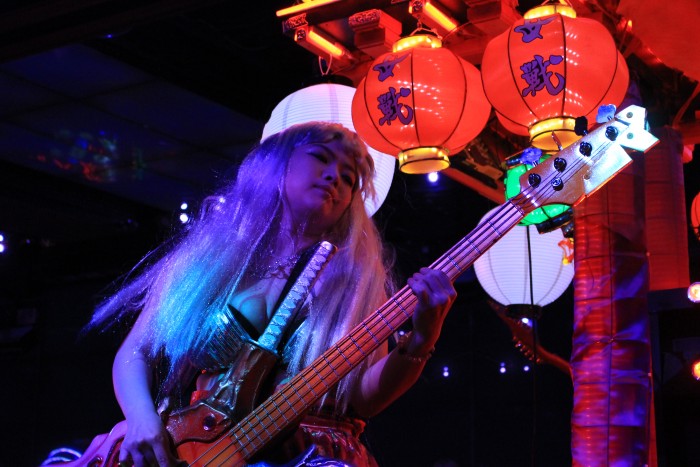 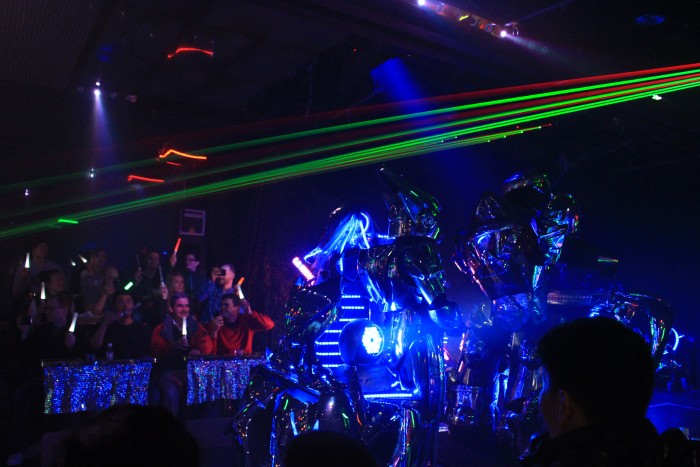 Is the Robot Restaurant touristy? Undoubtedly. Nearly everyone there was not Japanese. Does that matter? Nope. If you have any interest in robots, bright flashing lights, techno music, scantily-clad women, and drinking beer while watching all of the above, you’ll love the Robot Restaurant. Sure, it might be a highly-compressed stereotypical view of modern futuristic Japanese culture, but that’s precisely why it’s so enjoyable.

Since I’d skipped the meal, I needed some food, so I sought out more ramen on the cold, damp night. Not far from the Robot Restaurant sits the area of Golden Gai, famous for its narrow alleyways that pass by tiny bars, restaurants, and nightclubs. I did a bit of research, and found a ramen joint called Nagi Ramen Sugoi Niboshi that was highly recommended.

Nagi Ramen is easy to miss. Walk past the door, and that’s it. The restaurant is up a narrow staircase. Before you start heading up, get the attention of the server, who will let you know if there are any spots available at the solitary counter. Once you’re up, ordering is similar to other Tokyo ramen restaurants. Select your ramen from a machine, pay, get your ticket, and then sit down. You’ll have your hot bowl of ramen in minutes. This was one of my favorite bowls of ramen on the trip. It had fish-based broth, not one but two different types of noodles, lots of pork, and a perfectly seasoned egg. 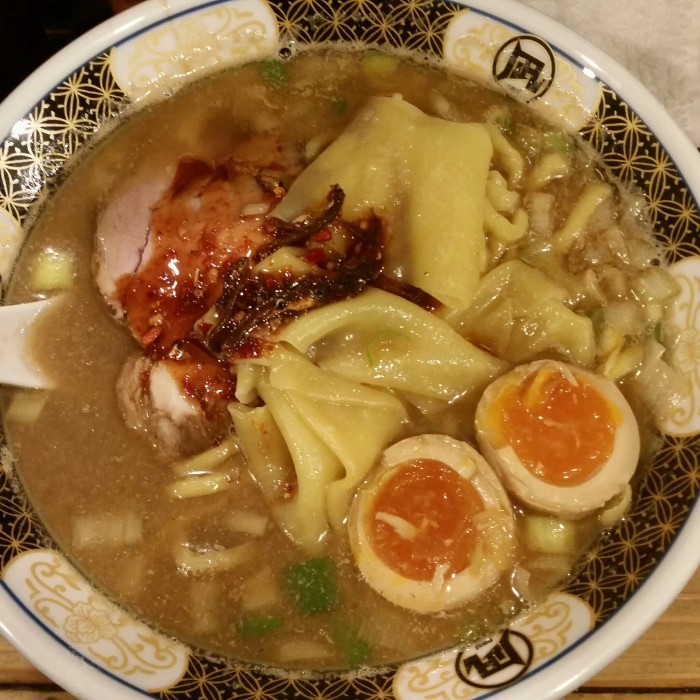 After my late dinner and a few drinks, it was time to head back to my hotel. The following day, I would be heading to the next destination on my trip, Kyoto.