My original plan for Japan was to start the trip out in Tokyo, then close it out in Kyoto, only going back to Tokyo for one last night so I could catch my flight home. This plan changed once I learned that a Grand Sumo Tournament would be starting in Tokyo during my last couple of days in the country.

Each year, six Grand Sumo Tournaments are held in Japan. Half take place in Tokyo at the Kokugikan, while the other half are in other locations around Japan. With each sumo tournament lasting for fifteen days, opportunities to see the full spectacle of the sport are limited unless you plan your trip around it.

Once I discovered that my trip coincided with the start of the tournament, I adjusted to spend an extra day in Tokyo. I looked up when tickets would be going on sale (generally 5-6 weeks before the tournament starts), and made sure I could be at a computer to book at just the right time. I was afraid that with the time difference I would need to be up at some ridiculous time, but it worked out just fine when they went on sale at 5pm my time. 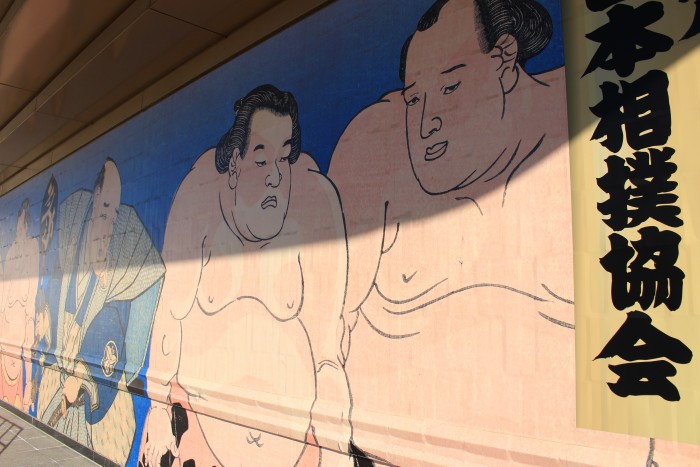 I had done my research regarding seating options. There are two levels of seating at the Kokugikan: Japanese-style box on the floor, and arena seats on the 2nd level. Tickets range in prices from 2,200 yen for a limited, general admission ticket, to 14,800 yen for the most expensive ringside seats. Where you sit depends on your preference and tolerance for discomfort. The closer seats mean sitting on the ground without much room to stretch out. This didn’t appeal to me, so I instead opted for the best seats on the upper level. I ended up getting a front row seat, which was perfect. I was able to see all of the action, since it’s more of an auditorium-sized building than a huge arena, plus I was able to take some great photos. 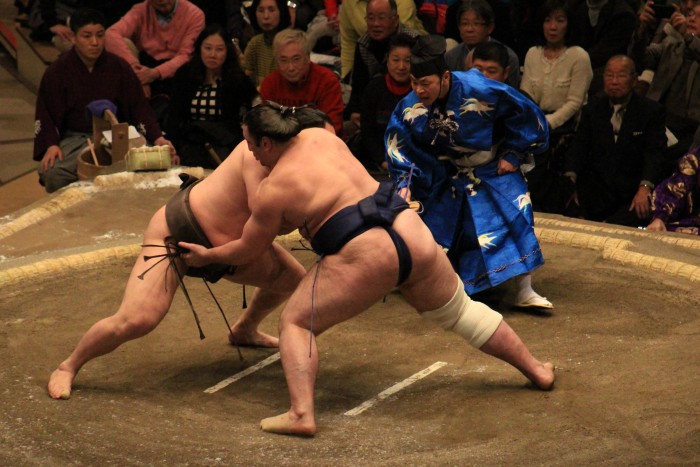 Let’s back up to the beginning of the day. After wandering around central Tokyo for a bit, I headed toward Ryogoku, which is where the Kokugikan is located. As I approached the area, the energy was palpable. Crowds milled about the area between the train station and the sumo hall.

In the United States, fans sometimes crowd near the entrances and exits of arenas, hoping to catch a quick glimpse of their favorite players or perhaps if they’re lucky, an autograph. Professional autograph hounds have ruined the latter for the most part, and players aren’t as accessible as perhaps they once were, for a variety of reasons. In Japan, it’s completely different at a sumo tournament. Outside the Ryogoku Kokugikan, fans line the sidewalks, forming a tunnel for the sumo wrestlers to pass through. 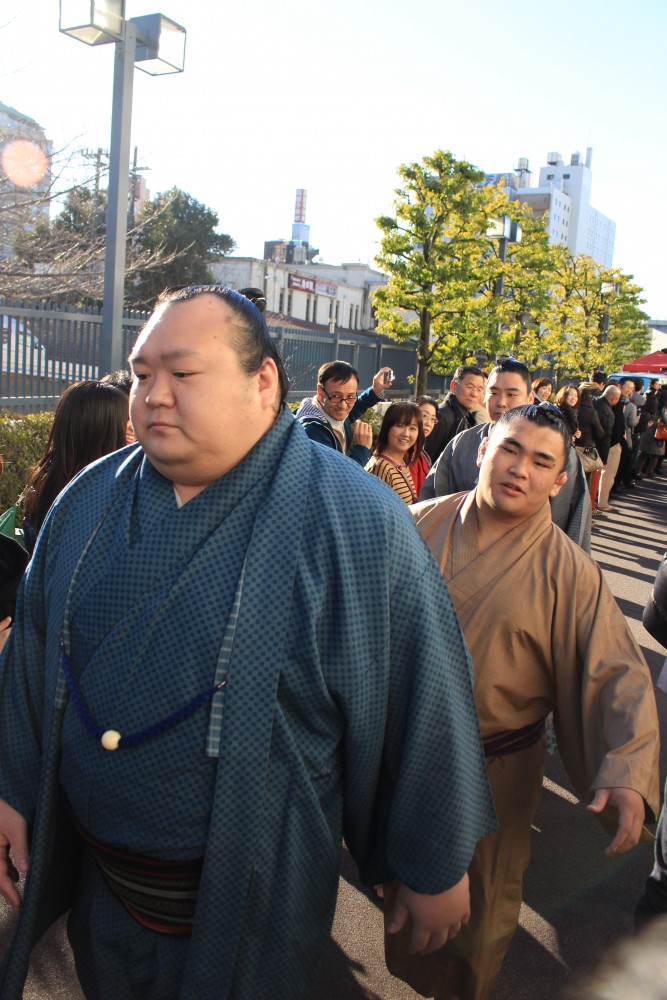 Each wrestler passes through with no issues, but fans are able to get close to them and take photos as they pass. It’s a scene that feels far more like a high school football game than a professional sporting event. Being able to stand next to these guys gives you that much more of a sense of how big they are, especially when you see them getting out of small taxi cabs. 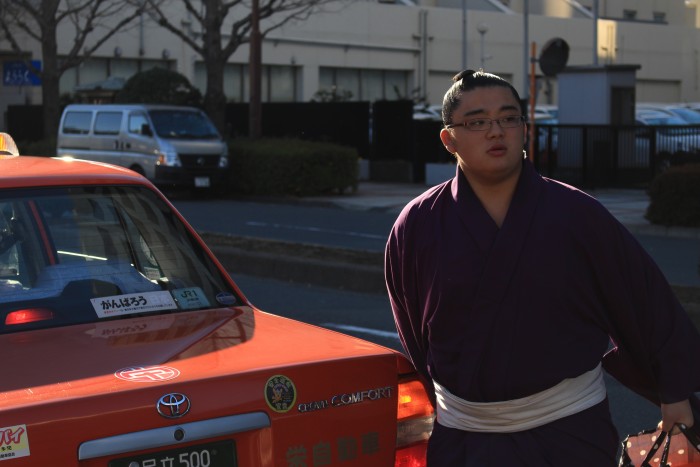 I stood and watched the arrivals of the sumo wrestlers for a while, then headed into the arena to get a bite to eat. There are a variety of vendors inside the arena, plus vending machines. One nice point about the vending machines: prices are the same as you’d find elsewhere. In the United States, the markup would be at least 3-4x. Deep beneath the arena, a meal is served that you won’t find at any other sporting event: Chanko-nabe AKA sumo stew. 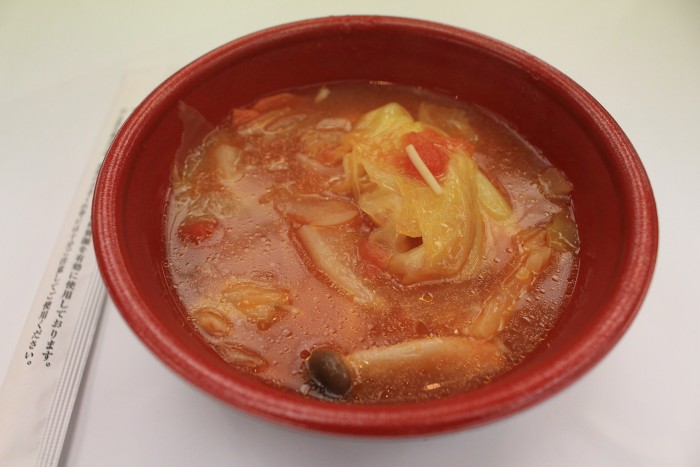 Chanko-nabe is a meat and vegetable stew served to sumo wrestlers to help them gain weight. While this particular stew was unlikely to make that happen, as it was much heavier on the vegetables than the meat (what would you expect for 250 yen, which is about $2), it was still nice to try a local dish with such a strong tie to the sport. If you’re obliged to have a hot dog at a baseball game, then why not have the unofficial food of the sport at a sumo tournament in Japan?

Around 3:30, I’d had enough wandering and headed to my seat. I had arrived at Ryogoku Kokugikan around 2pm, but I could have arrived much earlier. Lower-level sumo wrestlers compete in tournaments throughout the day, with the highest level closing out each day. The highest level is called Makuuchi, and this is the level at which the much-revered yokozuna compete. 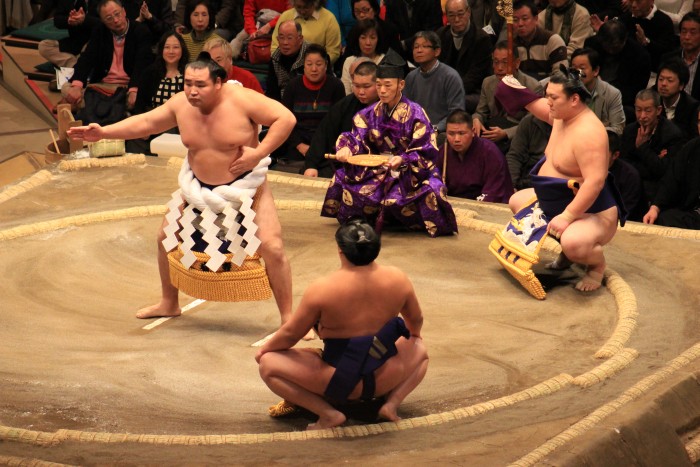 While on its face sumo wrestling is simple (the first wrestler to step out of the ring or touch the ground with any part of his body other than his feet loses), there’s a lot of interesting history and customs around the sport. I’ll skip going into too many details, but if that sort of thing interests you, you can start with the sumo Wikipedia entry. 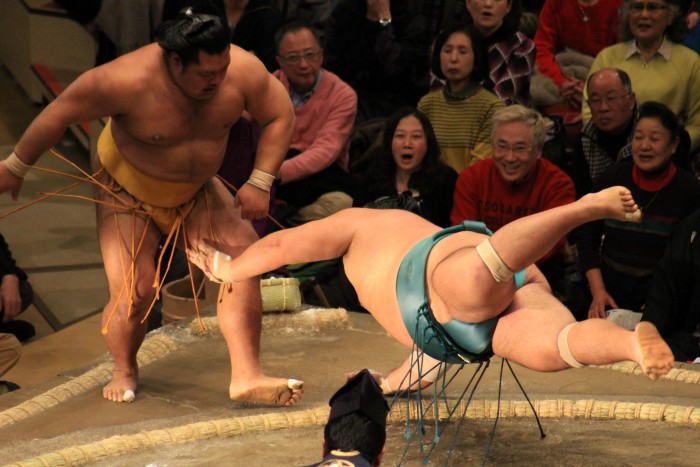 Each day’s main event begins around 3:45pm with an entrance ceremony. The wrestlers enter the sumo ring (dohyō) and circle around the gyōji (referee). The ring-entering ceremony is called dohyō-iri, and it’s pretty cool to see all the wrestlers at once. 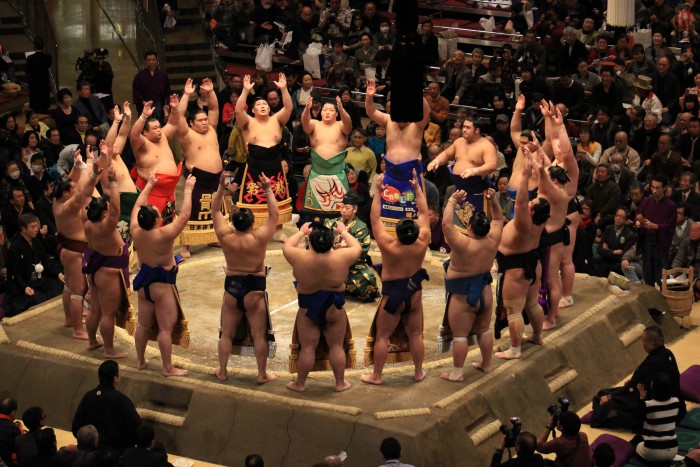 The matches last for about two hours in total, with each matches being comprised of increasingly higher-ranked wrestlers as the afternoon progresses. As such, the tension continues to build through the event, since everyone knows the best wrestlers are still to come.

Before each match begins, the wrestlers go through an extended pre-bout ritual. First, both sumo wrestlers are announced. Then they each go to their respective corners and the ceremony begins. 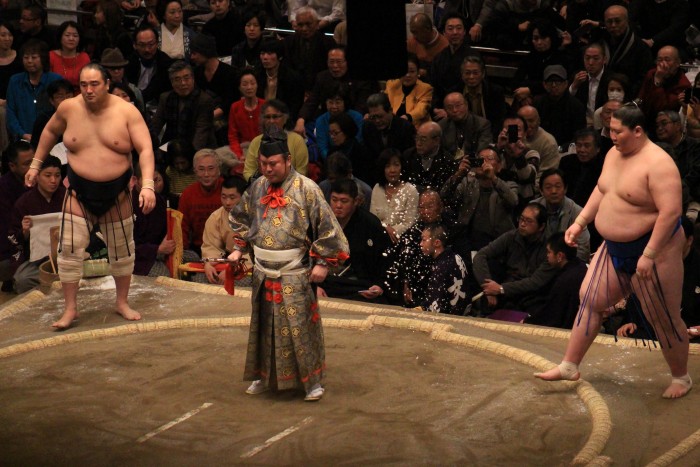 They squat, clap their hands, and raise their legs as high as possible, culminating with a stop on the ground. The process is repeated with their other leg. The two sumo wrestlers rinse their mouths with water, and further introductions occur. Sometimes the mouth rinse and leg lifting happen at the same time. 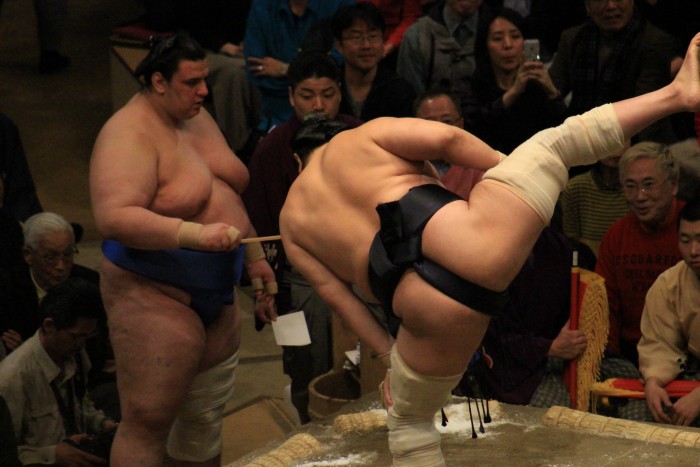 Banners symbolizing prize money may be paraded around the ring. 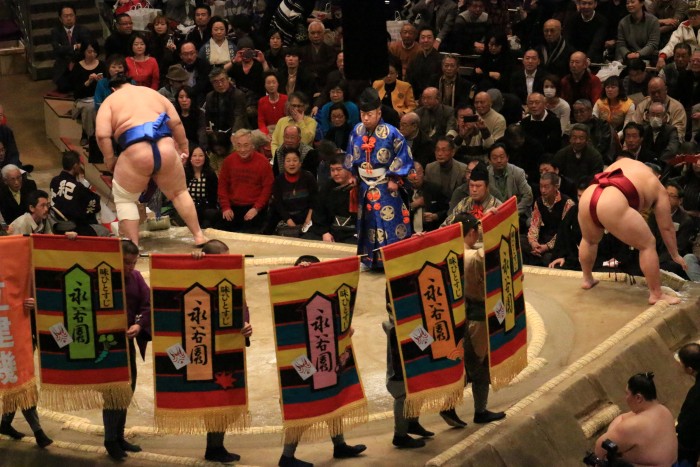 In an attempt to psych each other out, the wrestlers will face each other closely, stomping their feet once again.

This process is repeated a few times, with each wrestler retreating to their corner to throw salt to purify the ring before the match. This part of the ritual reminded me of LeBron James’ chalk toss. 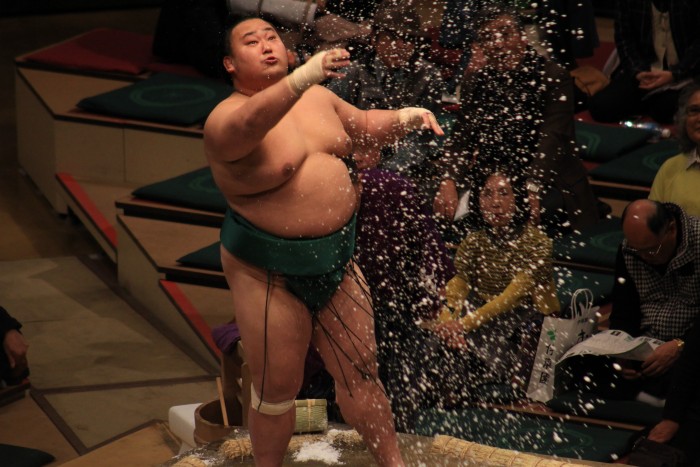 That’s the short version of the pre-bout ritual, but for a great, in-depth description, go here.

Eventually the match begins. In general, sumo bouts only last a few seconds. From time-to-time, they’ll last a minute or longer. During my day at the sumo tournament, one match lasted over 30 seconds, while most of the remainder were between five and fifteen seconds. 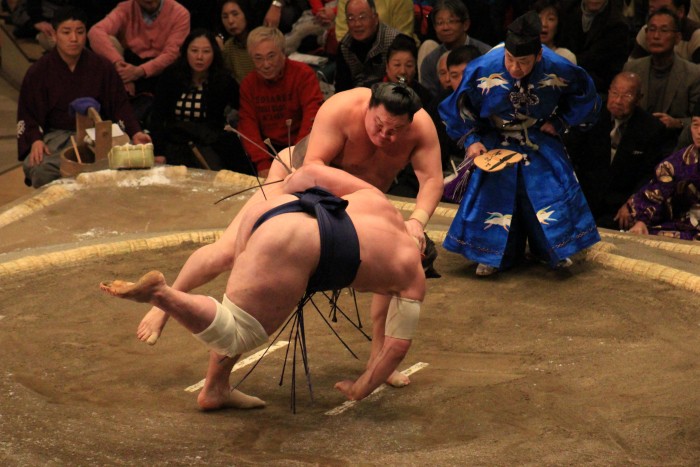 Here are a couple of videos from Day 2 of the January 2015 Grand Sumo Tournament at the Sumo Hall in Tokyo.

The day concludes with the highest ranked match. If a yokozuna loses, you may see seat cushions get tossed into the air. Following the final bout, a closing ceremony takes place. 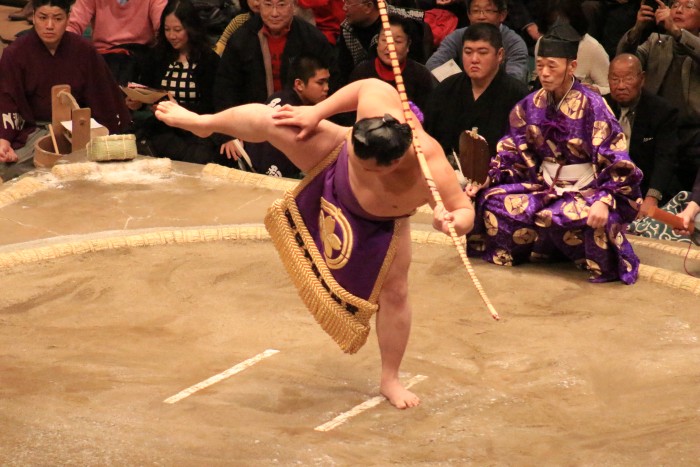 Sumo wrestling is a uniquely Japanese tradition, one worth seeking out on a trip there, or even scheduling your travels around.  Between the energy of the fans and wrestlers, the customs, the pageantry, and the excitement of watching a bout, the Grand Sumo Tournament is an enjoyable way to spend an afternoon.