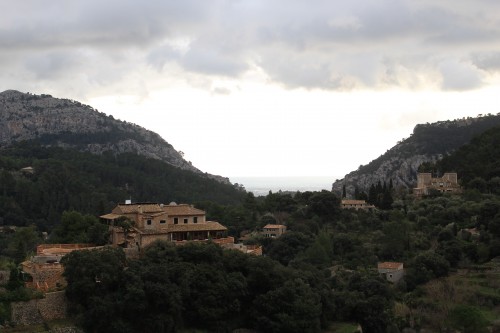 Valldemossa is a mountain village north of Palma de Mallorca. It sits in the Serra de Tramuntana range, which is a UNESCO World Heritage Site.

My day trip to Valldemossa from Palma took two attempts. On my first try, I attempted to go to Valldemossa on December 26th. Nowhere did it say that the buses were running on a special holiday schedule that day, so I had no idea that I had just missed a bus by about 15 minutes, and the next bus wouldn’t be for another couple of hours. Not wanting to wait around in a bus station, I aborted the mission and came back the next day. 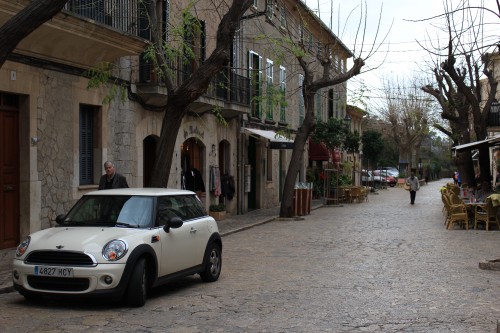 I was spoiled with sunny weather for the first part of my trip to Mallorca. As a result, I left for Valldemossa with only a light jacket, despite it being in the mountains. Initially, I had no regrets, as the 30-minute bus ride was inexplicably warm.  Upon arrival in the town, I realized my mistake. Not only is Valldemossa at a much higher elevation than Palma de Mallorca, it was also cloudy and windy. 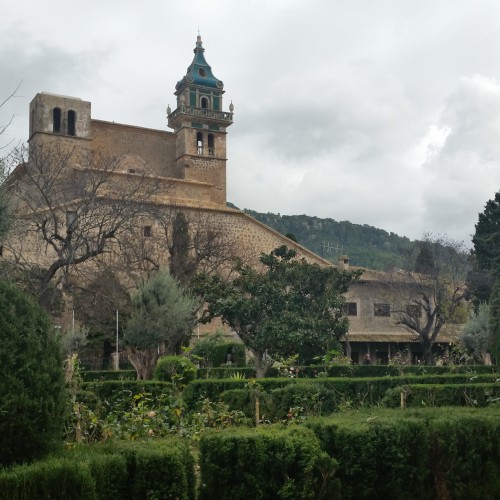 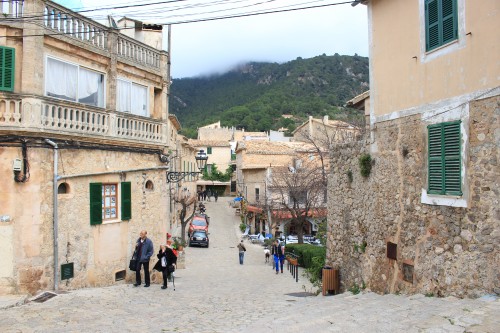 Undeterred, I headed toward La Cartuja de Valldemossa. Real Cartuja Valldemossa is a former monastery that is now a church and museum. The museum has several sections, but much of it is devoted to Polish composer Frédéric Chopin and French writer George Sand, who carried on their affair in Valldemossa in 1838-39.

Had I read Chopin’s Wikipedia entry prior to my trip, I would have brought a heavier jacket. Chopin & Sand’s time in the mountain retreat was apparently not enjoyable.

The two spent a miserable winter on Majorca (8 November 1838 to 13 February 1839), where, together with Sand’s two children, they had journeyed in the hope of improving the health of Chopin and that of Sand’s 15-year-old son Maurice, and also to escape the threats of Sand’s former lover Félicien Mallefille. After discovering that the couple were not married, the deeply traditional Catholic people of Majorca became inhospitable, making accommodation difficult to find. This compelled the group to take lodgings in a former Carthusian monastery in Valldemossa, which gave little shelter from the cold winter weather.

On 3 December, Chopin complained about his bad health and the incompetence of the doctors in Majorca: “Three doctors have visited me … The first said I was dead; the second said I was dying; and the third said I was about to die.”

That’s not exactly a glowing endorsement of Valldemossa or Mallorca as a whole, but Chopin did create a lot of music there during his brief stay, including part of his 24 Preludes. What is it about places with terrible weather leading to musical inspiration (e.g. Glasgow & Seattle)?

Entry to La Cartuja was 8.50 Euros. If you think that this fee would get you entry to the entire building, you are mistaken. 8.50 Euros does not include access to the actual apartments ( celda de Frédéric Chopin y George Sand ) where Chopin & Sand stayed. This is an additional 3.50, and no mention of it is made until you show up at that part of the building & try to enter. There is a separate entry to La Cartuja that includes this 2nd ticket, but it’s easy to miss. Here’s a photo of it with a cat that was roaming the grounds. No word on whether or not they charged the cat the extra 3.50. 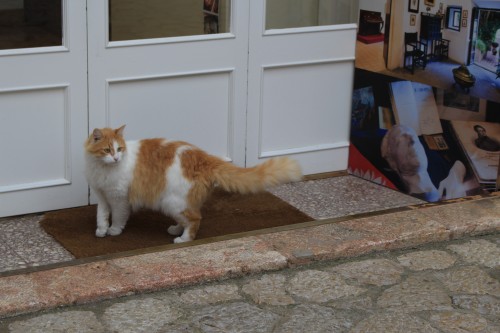 I skipped the extra fee on principle. As far as I was concerned, letting me enter for 8.50 and then asking for an additional 3.50 was a bait-and-switch. If I want to go see a piano, I can go to a piano store.

La Cartuja had several other rooms to visit. Only around half of them were gift shops. I feel that they could really up their gift shop game and convert every open space to a place to sell things.

There were also these creepy statues of Chopin & Sand. 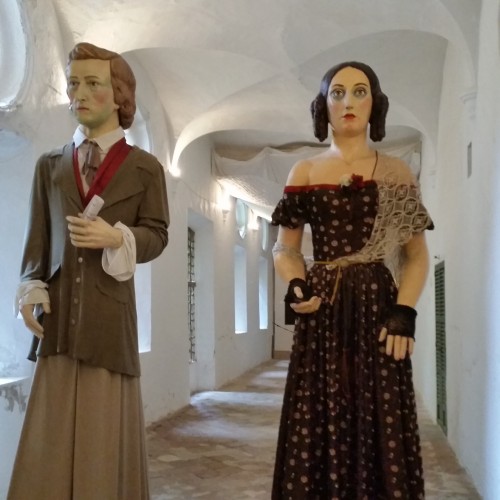 Overall, I’d give La Cartuja de Valldemossa a C grade. While the museum on the whole wasn’t much to see & consisted mainly of gift shops, the views from the building were nice, as it sits at one of the highest points of the town. There was also an informative room about Archduke Ludwig Salvatr of Austria, who lived in the area, wrote several volumes about the Balearic Islands, and was one of the world’s first conservationists. 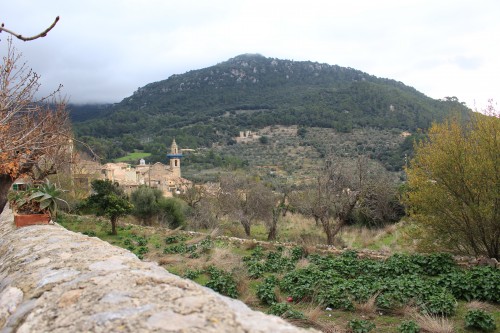 I left La Cartuja to find the sound of bagpipes wafting through Valldemossa. While the music certainly fit the weather, I had not previously associated bagpipes with Spain. 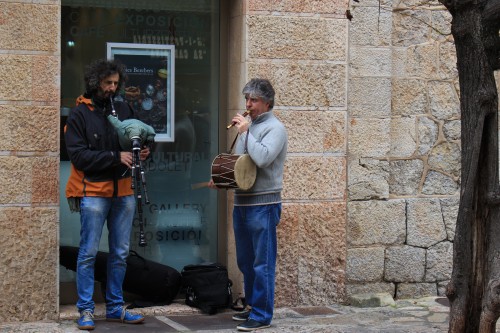 As it turns out, the Galician gaita is actually associated with Spanish folk music. Not only did I see bagpipers in the town, I later noticed that the tiles on this wall at La Cartuja prominently feature a bagpiper. 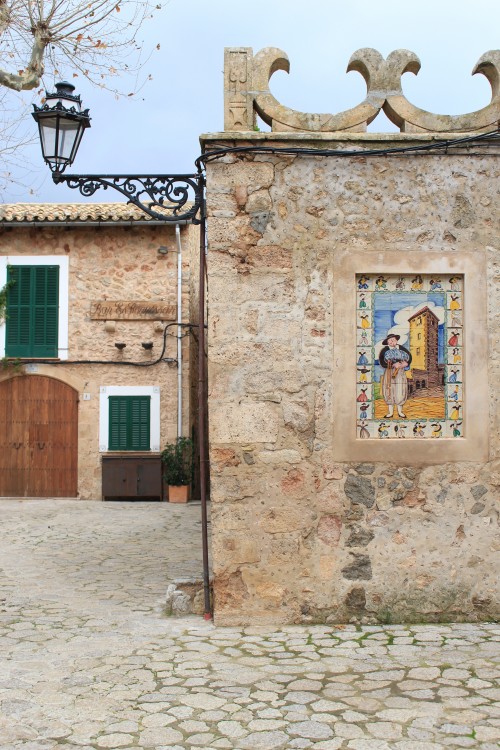 It seems that every Mediterranean island has their own specialized local desserts or baked goods. In Valldemossa, it’s called Coca de patata. A coca de patata is a baked roll made from potatoes, egg, and sugar. Served with Spanish chocolate a la taza, it’s a perfect snack on a cold day. 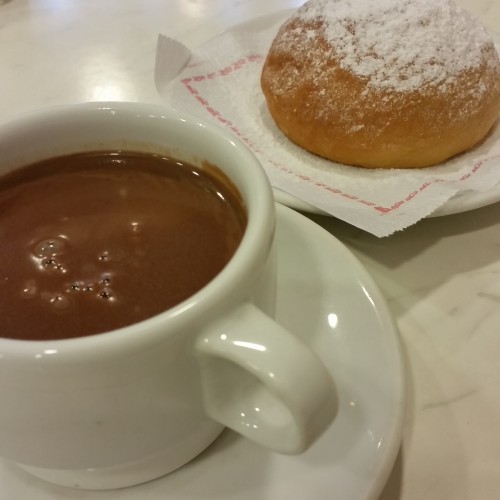 If you’ve never had Spanish hot chocolate, it’s amazing. You can get it with churros all over the country, or in Mallorca you can have it with a coca de patata or ensaimada (another Mallorcan specialty shown below). 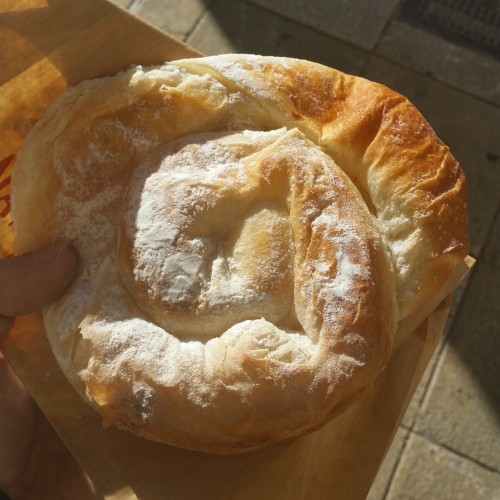 Valldemossa is a very small village. While it’s picturesque, there is only so much to see and do here. I think I walked almost every street of the town in about 2 hours. I imagine that it would be a lovely place to spend a weekend relaxing, but with the weather not getting any warmer, I opted to head back to Palma for the rest of the day. 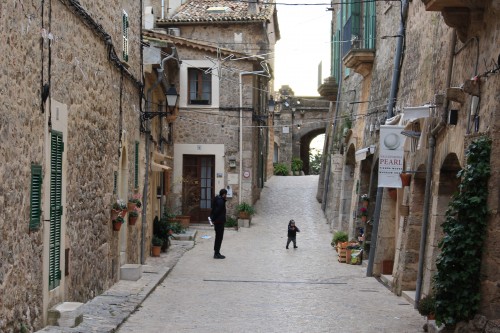