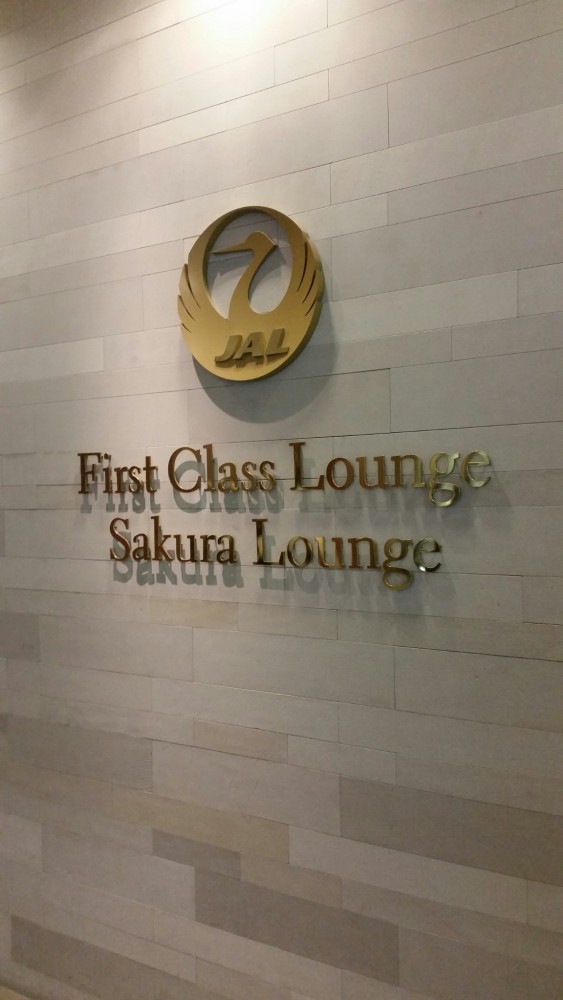 As much as I hated to be leaving Japan, it was time to head home on the final leg of my trip around the world. My final long distance flight would be back to the United States on Japan Airlines in first class from Tokyo to Los Angeles.

My departure was out of Tokyo Narita. Since I wanted to spend some time in the JAL first class lounge, and my flight was in the early evening so I couldn’t do much in Tokyo that day, I had arrived at the airport very early. It was pretty quiet in the early afternoon. Immediately upon my arrival at the JAL first class check in, the great service began. I was swarmed by staff members who were making sure that everything was fine while they were searching for my reservation. After a slight delay, they found it (apologizing profusely), and I was on my way.

After checking in with Japan Airlines, I was sent to the separate first class security screening area located right near the check-in desk. While I wasn’t in a hurry, it was still nice, and it was one of the least rushed security screenings I’ve ever been through. It’s amazing how nice it can be when there’s nobody around you who doesn’t know the procedure.

The JAL first class lounge at Tokyo Narita is just past this security checkpoint. I checked in at the desk, and then had the full run of the place. The first class lounge is a nice space. There’s plenty of decently comfortable seating, with a variety of chairs to sit in. There are also massage chairs available, as well as showers. 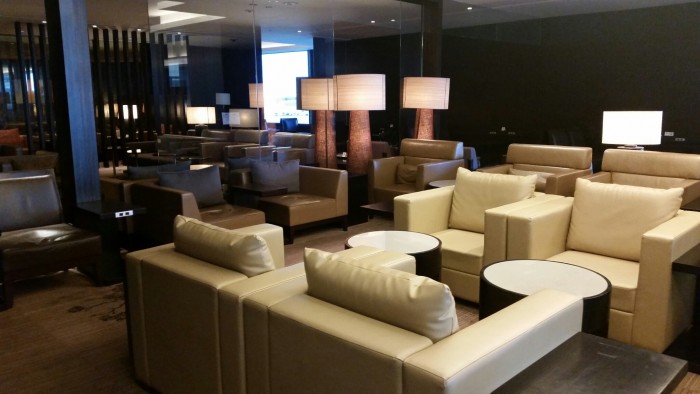 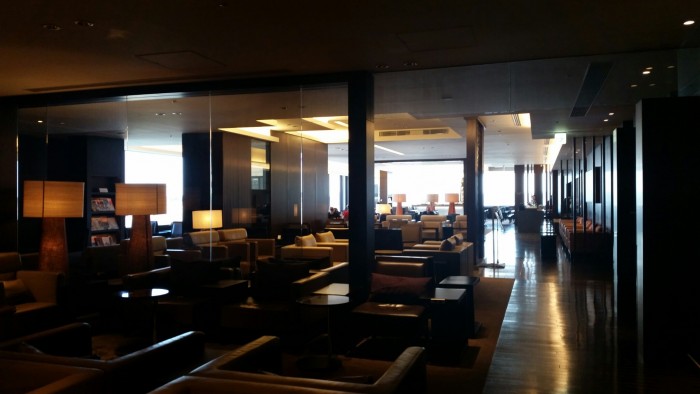 When I arrived at the JAL Tokyo Narita first class lounge, there was a decent cold and hot food spread out, with a selection of Japanese foods, as well as other cuisines. 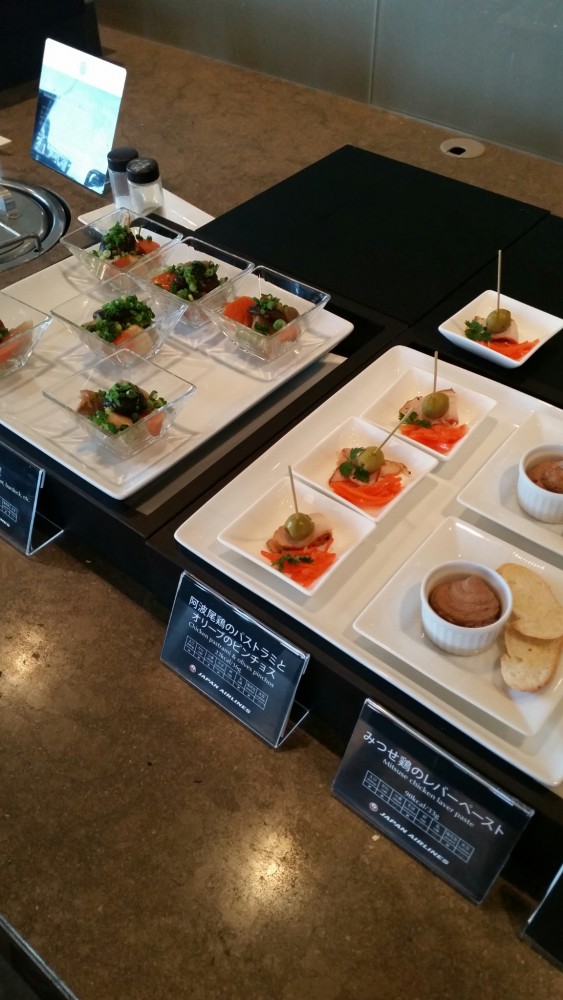 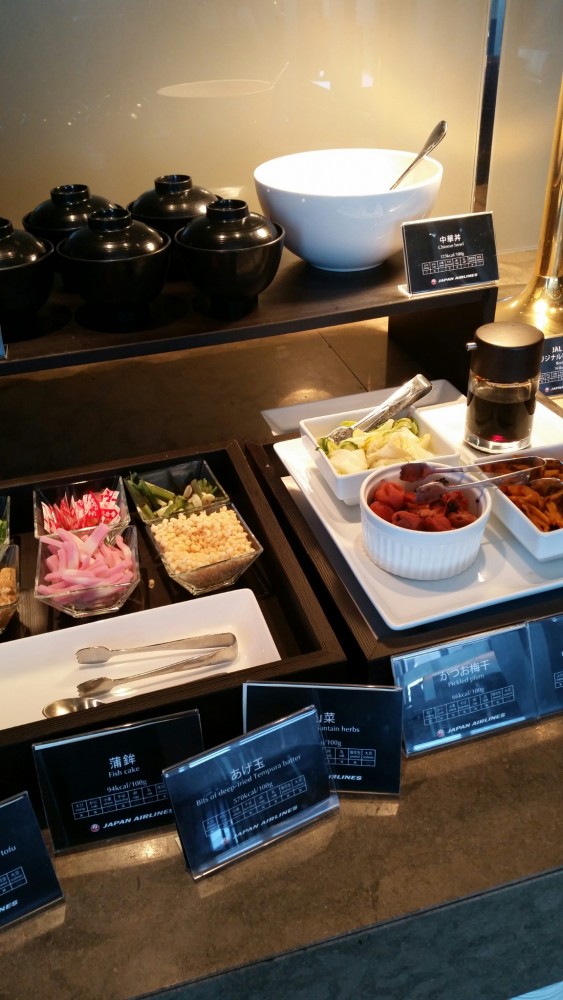 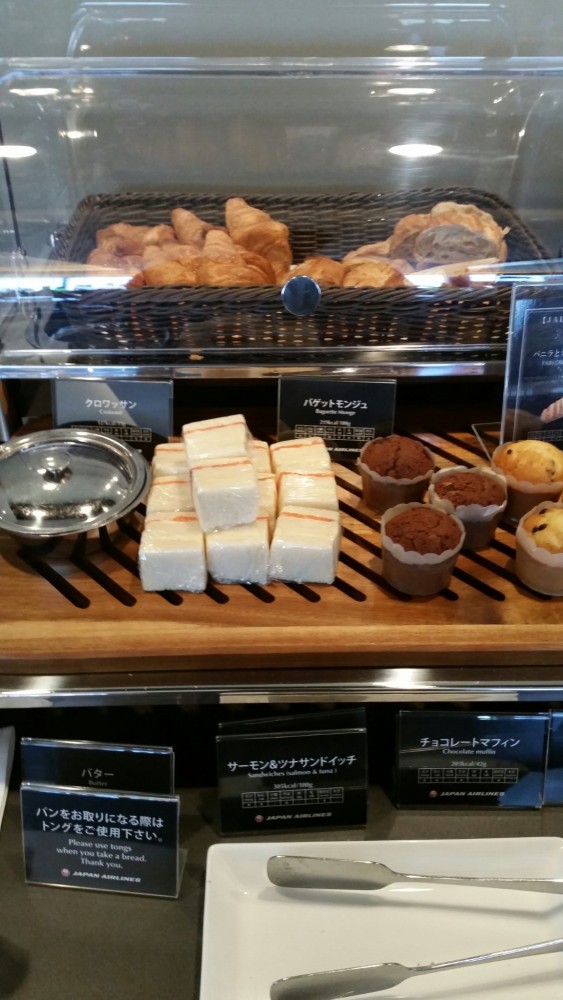 I spent the next few hours in the JAL first class lounge. When I got there, there were only a couple of other passengers. Closer to the flight time, more people arrived, but it never felt crowded. There were a couple of men there who must have been very important. The JAL staff members were waiting on them hand and foot, making sure all of their needs were fulfilled, and even going to make drinks for them. If I ever get that lazy, kill me, or at least mock me mercilessly. Plus, I don’t know why anyone would ever choose to have their drinks made for them, as my own drinks are much stronger 🙂 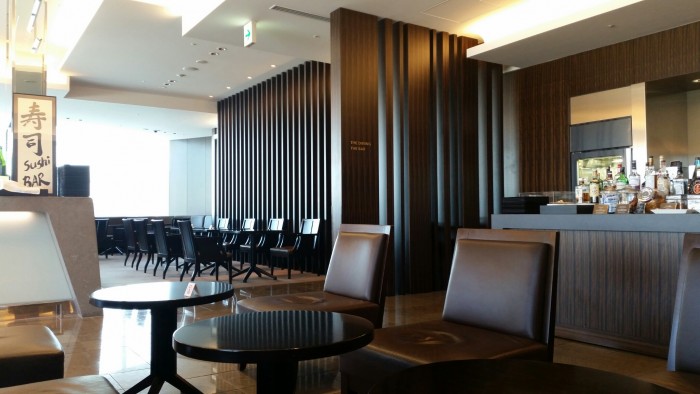 The star of the JAL first class lounge at Narita is the bar. I haven’t been in a self-service airline lounge bar with such a great selection of whiskies and sakes. The sake bar is in a separate area, along with some champagne. They had Yamazaki and Hibiki from Japan, as well as Macallan, which is my favorite Scottish whisky. I hadn’t intended on drinking much before my flight, but with so many drinks I’d never had before, I couldn’t help sampling every sake & every whisky. 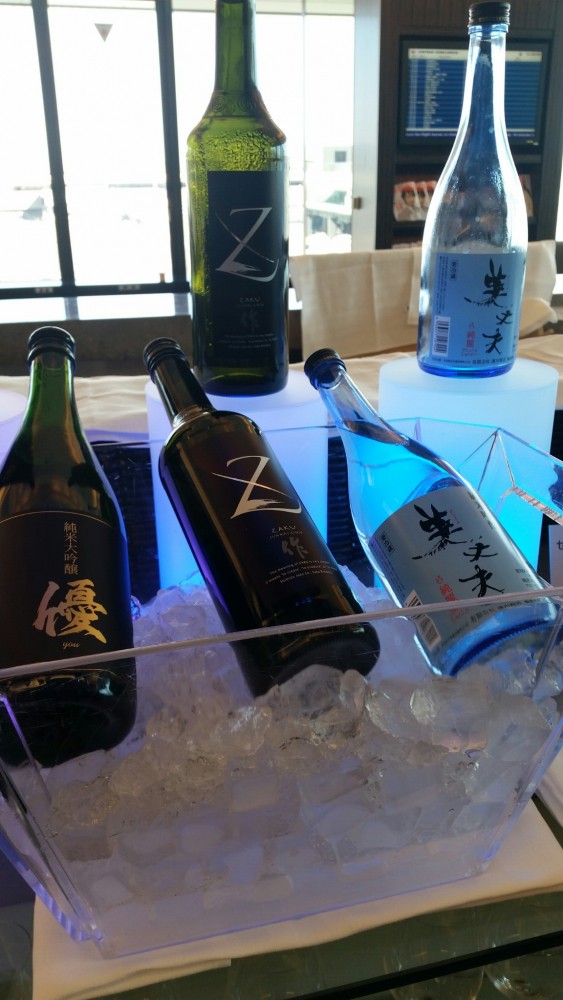 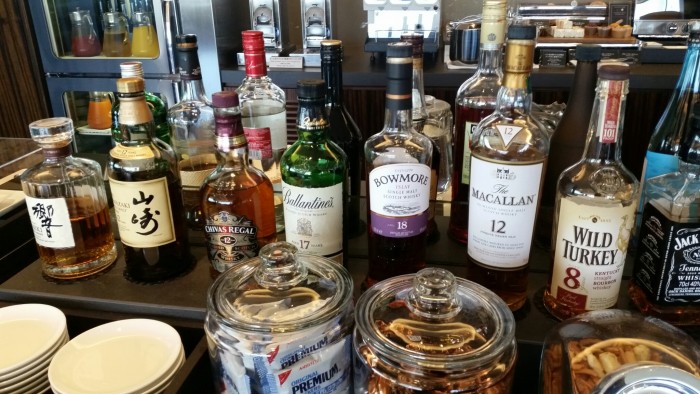 Did I say the star of this lounge is the bar? Well, perhaps it’s one of the two stars. The other highlight of the JAL first class lounge at Tokyo Narita is the sushi bar, with made-to-order sushi. 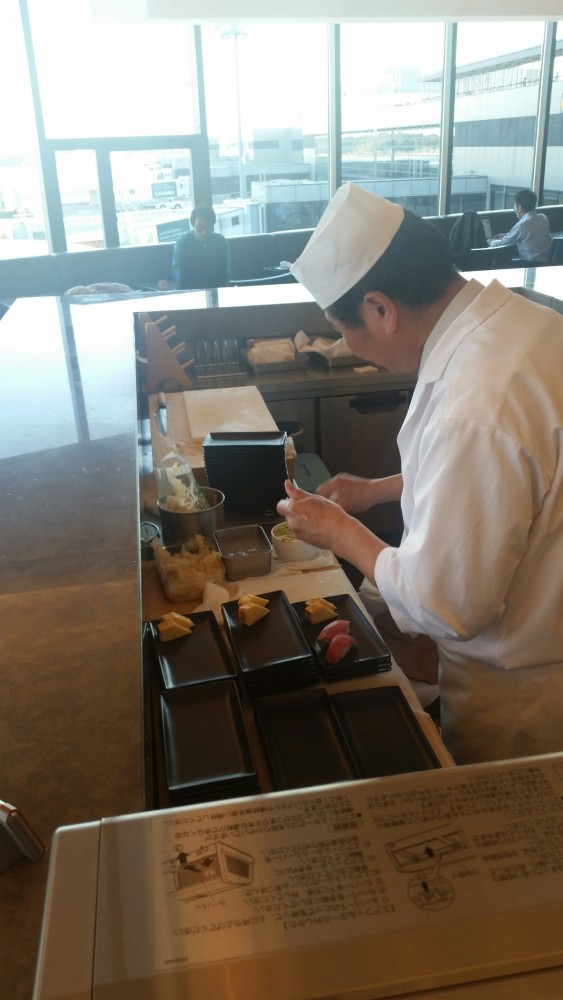 I’m not going to lie, I ate a lot of sushi that day. I’d planned ahead and since the sushi bar wasn’t open when I first arrived at Narita, I skipped the other foods that were out, preferring to wait instead. I was rewarded with several plates of good nigiri. Japan Airlines has done well with this last memory as you’re leaving the country. 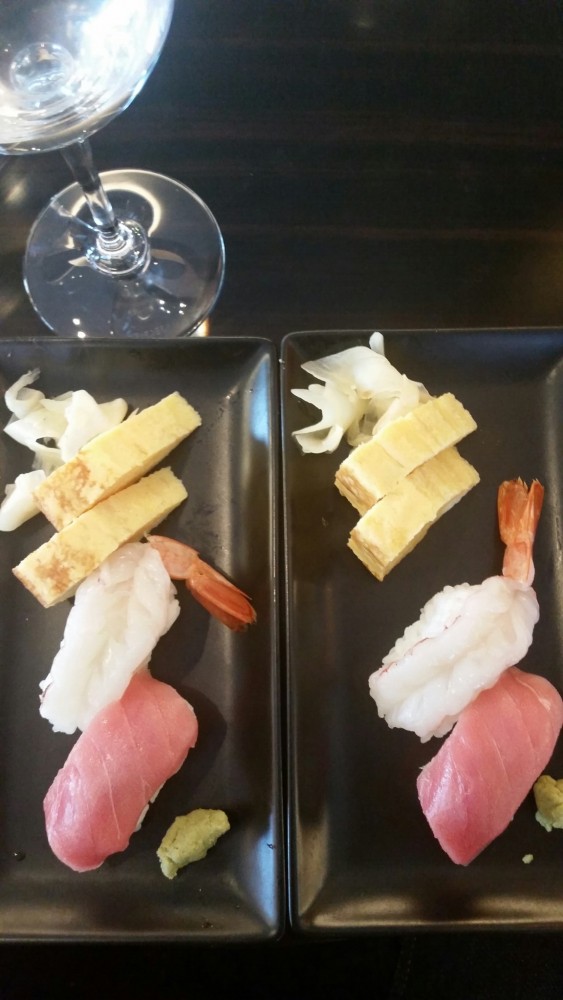 Finally, it was time for my flight. Belly full of sushi, whisky, and sake, I left the lounge and got on my JAL first class flight to Los Angeles. 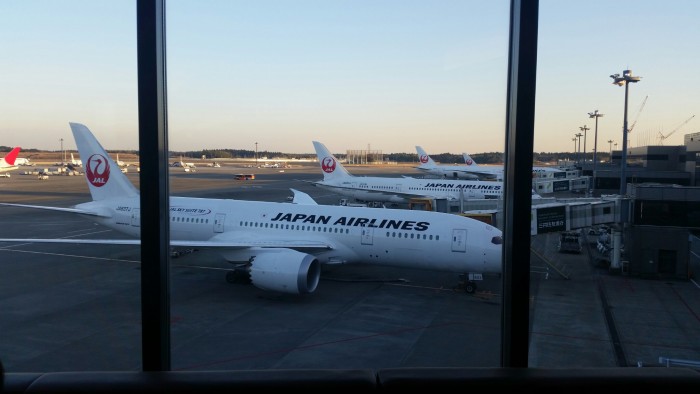