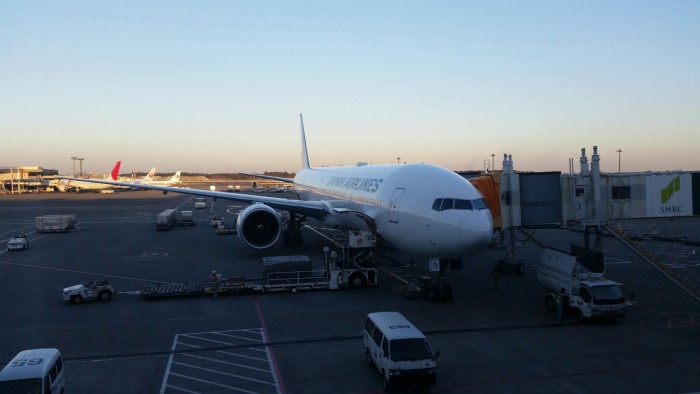 After visiting the JAL first class lounge in Narita, it was time to board my flight from Tokyo Narita to Los Angeles. As usual on this trip, I was first to board since I was seated in one of JAL’s first class sky suites on the Boeing 777-300ER. 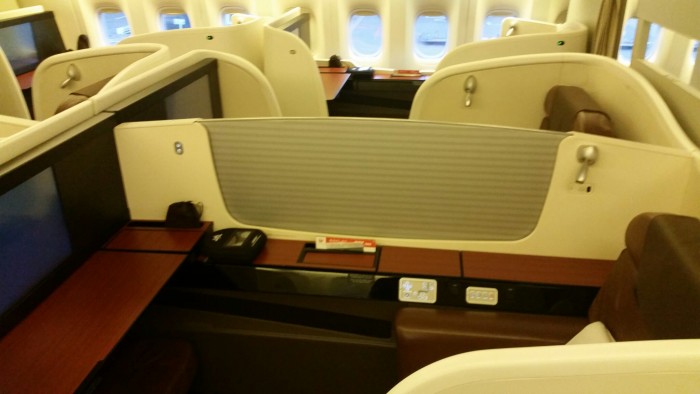 The JAL first class seats are configured in a 1-2-1 arrangement. The two middle seats have a divider that can be raised or lowered depending on if the two people are seated together, so these are the seats to choose if you are not traveling alone. The JAL first class sky suites are among the nicer first class offerings around. The seat was more than wide enough. 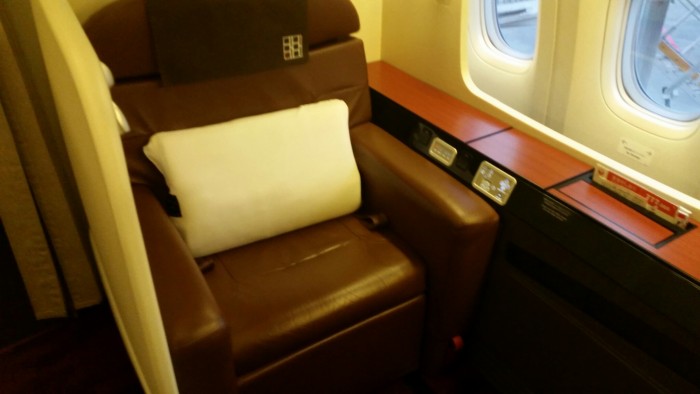 There was also of course plenty of legroom, which is not at all surprising with a large seat that also folds out into a lie-flat bed. 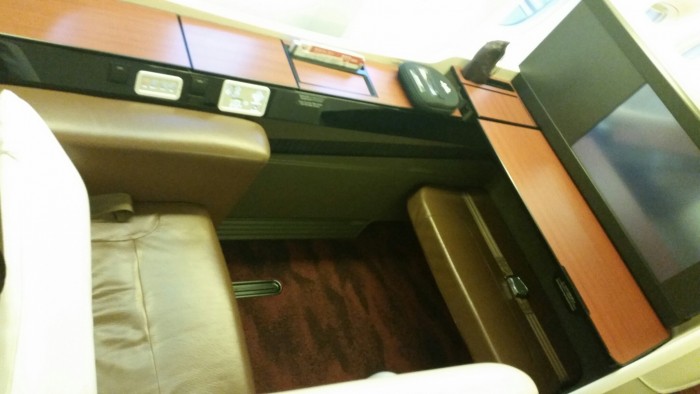 The seat also had a vibrating function, as well as the ability to change lumbar support. My only complaint about the seat was that it moves in a somewhat odd fashion, making it somewhat difficult to find a position that is comfortable.

The JAL first class sky suite also had plenty of storage space, as well as a comprehensive touchscreen remote control, plus a small mirror, which was a nice touch. 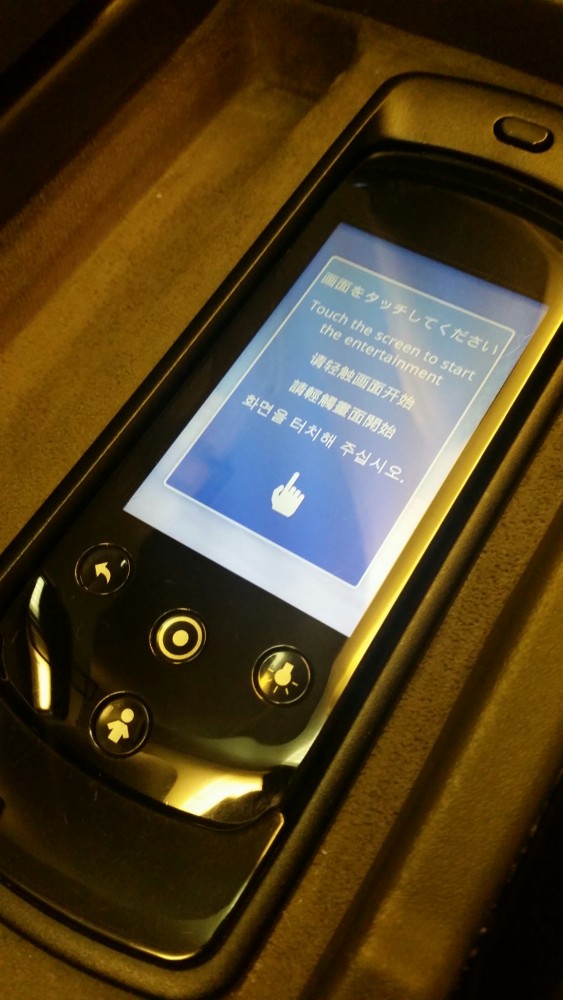 After taking photos, I settled in. I was given a glass of Dom Perignon, which in my opinion is the most overrated champagne. But hey, champagne is still nice, especially when you’re in first class. 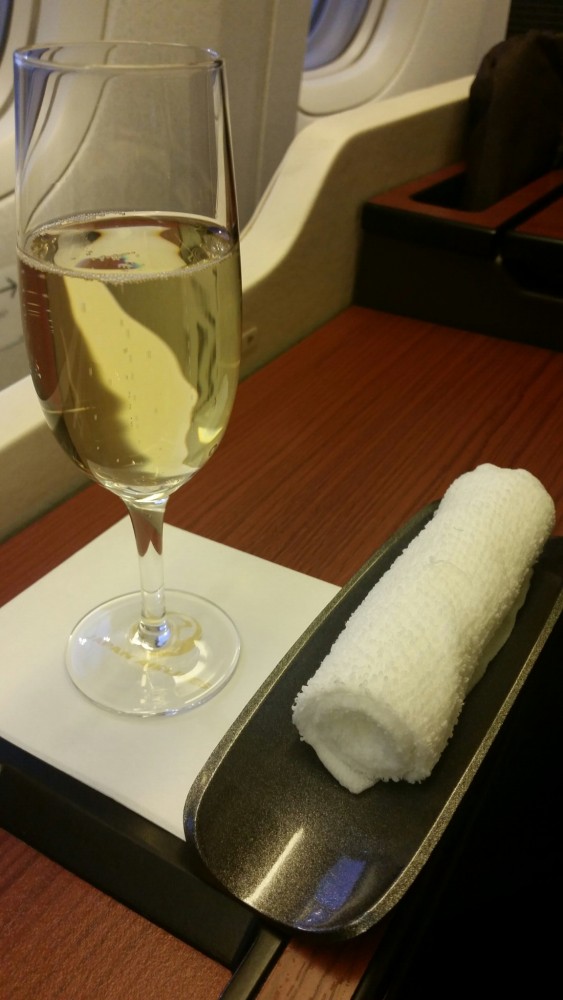 With boarding still going on, I started watching a movie. I always appreciate when the inflight entertainment is activated this early, as there’s nothing else to do. That said, I was unimpressed with JAL’s movie selection. I ended up watching This Is Where I Leave You, which was ok, and Lucy, which was terrible. Beyond that, it was slim pickings.

The video screen, while quite large, was unfortunately in a fixed position. Instead, the seat itself can be moved forward. 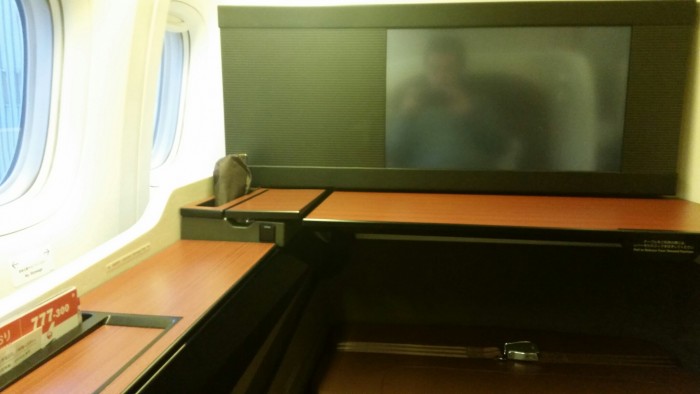 There was inflight internet available for only $18.80, which seemed reasonable for a 10+ hour flight, but I didn’t have much of a need to be online, so I skipped it, and therefore can’t speak to the quality of the connection.

After takeoff, I took off my shoes and put on the JAL slippers I had been given. While they were a unique amenity, they were very small.

Service began with a warm towel. I would end up getting 3 of them over the course of the meal service. I suppose if regular airlines might give one, JAL would go above-and-beyond with cleanliness and service by giving more.

I started the JAL first class meal service with an amuse-bouche of a liver ball and shrimp. 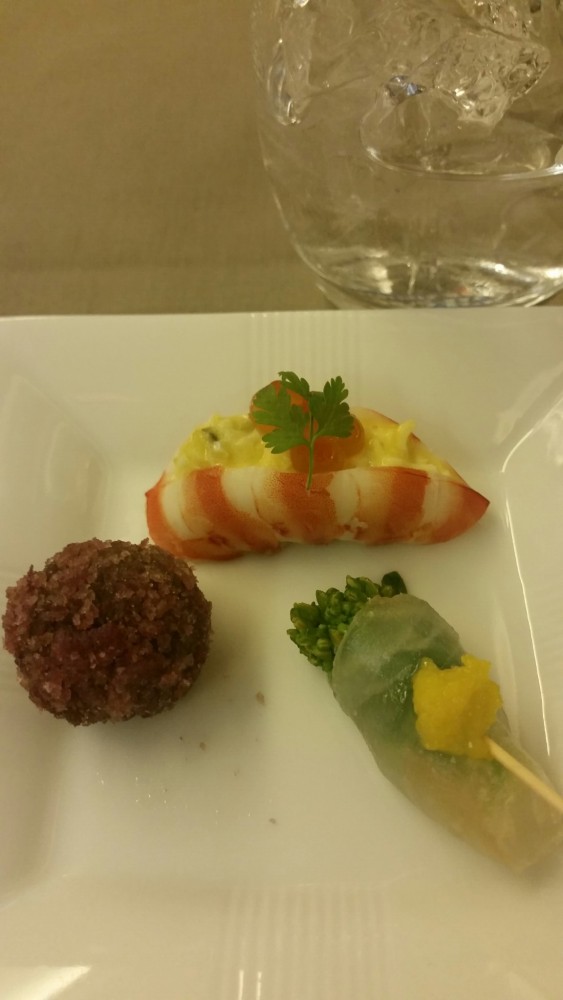 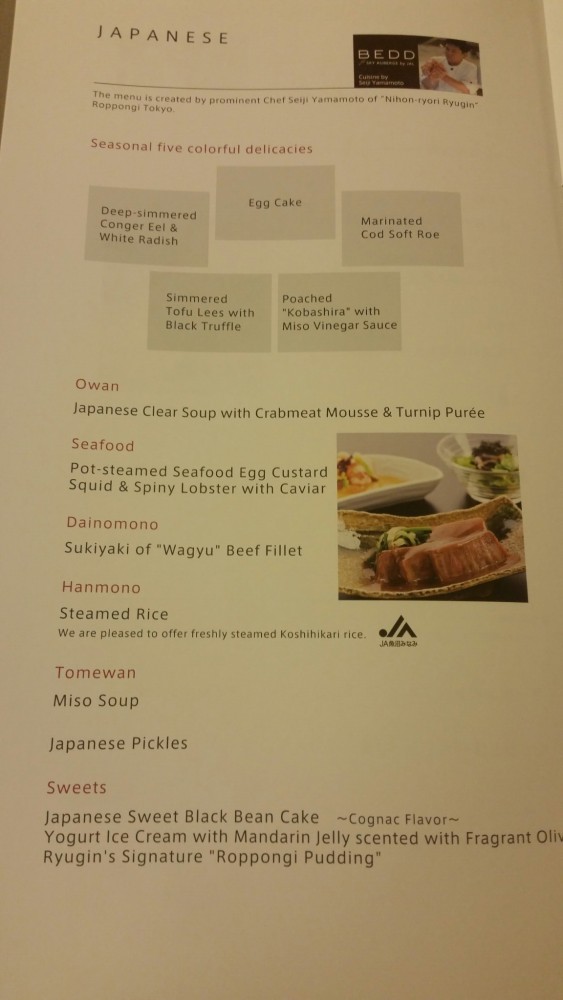 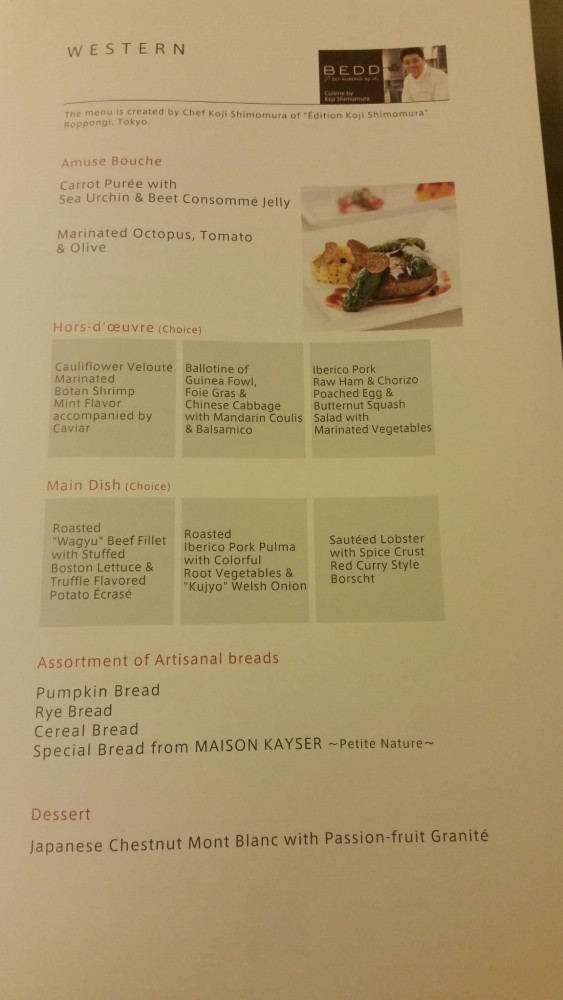 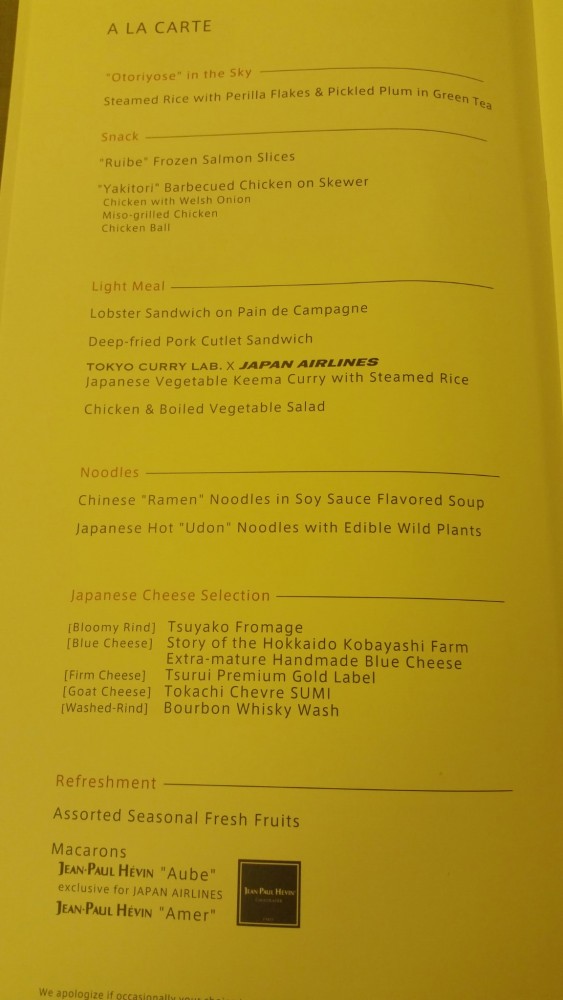 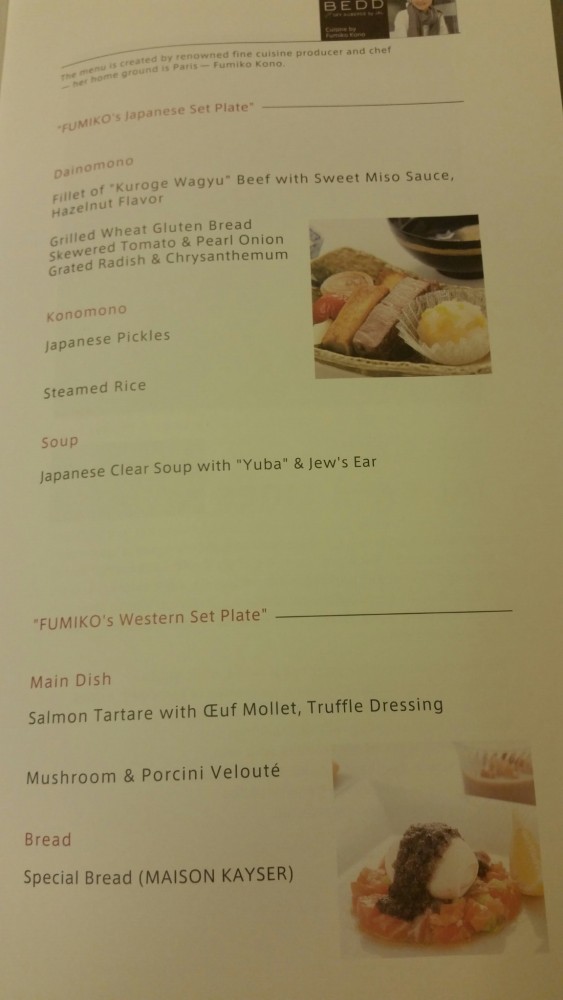 Although the Western menu looked good, I opted for the Japanese, figuring it was the last bit of Japan I’d be experiencing.

I have seen in other people’s JAL first class reviews that they offer caviar, and had I chosen the Western meal, I could have had it. They buried the mention of it, when they should have led with it, so I didn’t notice it until later. I don’t know if I could have opted for the Japanese meal, but also had caviar along with it.

The JAL first class service, although friendly, was agonizingly slow. I had already finished my first movie before I even started with the first course. 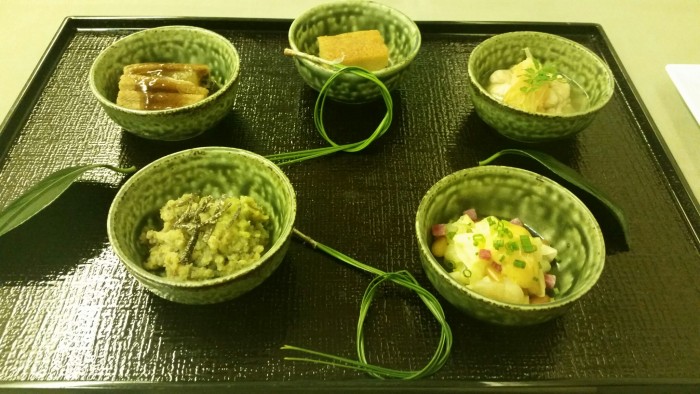 The courses continued, but I didn’t finish eating for another hour after my first course had started. 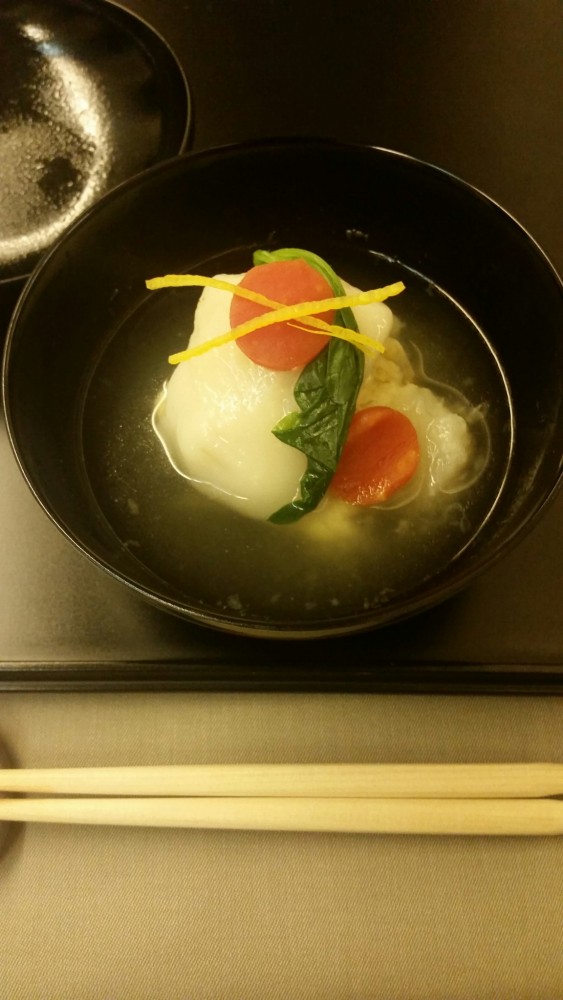 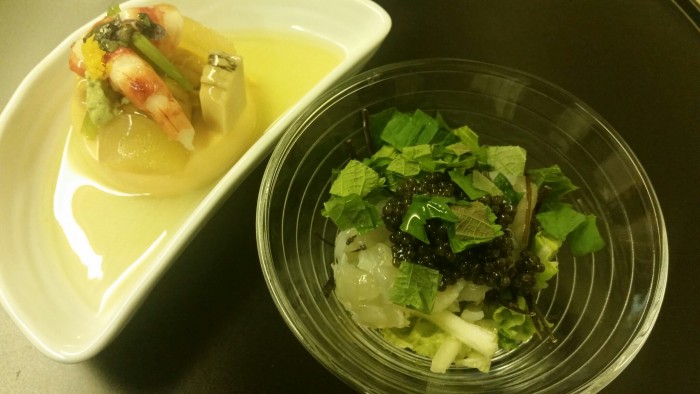 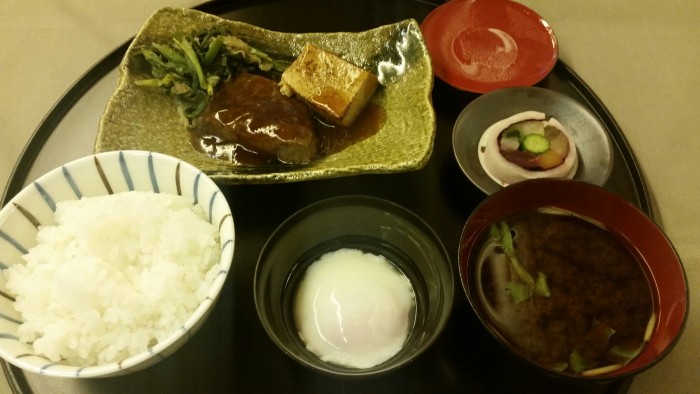 That said, the flan-like Roppongi pudding dessert was well-worth waiting for. 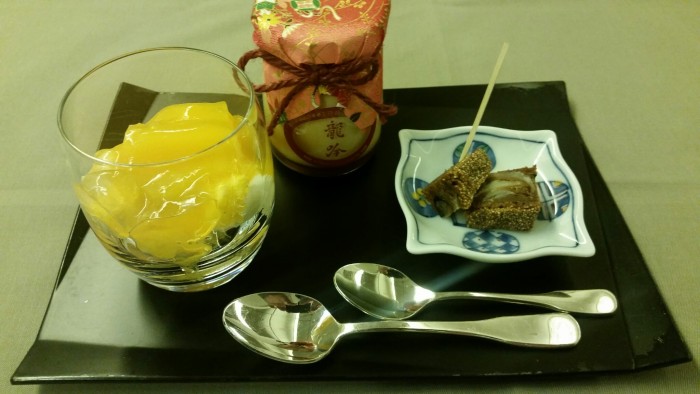 During the extended meal service, I checked out the Shiseido cosmetics amenity kit.

After I ate, I had the bed made up. JAL gives first class passengers two options for their lie-flat bed: hard or soft. 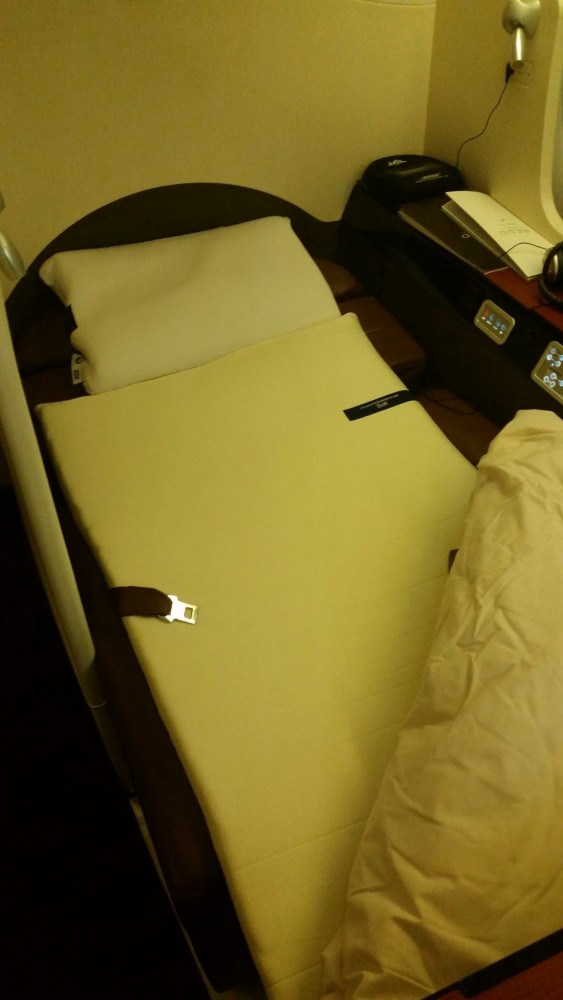 I opted for soft, and fell asleep for the next few hours. Or at least, I should say I fell in and out of sleep, as the person in the seat in front of me had his video screen still on, so it was filling the first class cabin with light. The screen was showing the map, so the light kept changing. In hindsight, I probably should have asked the flight attendant if it could be turned off. 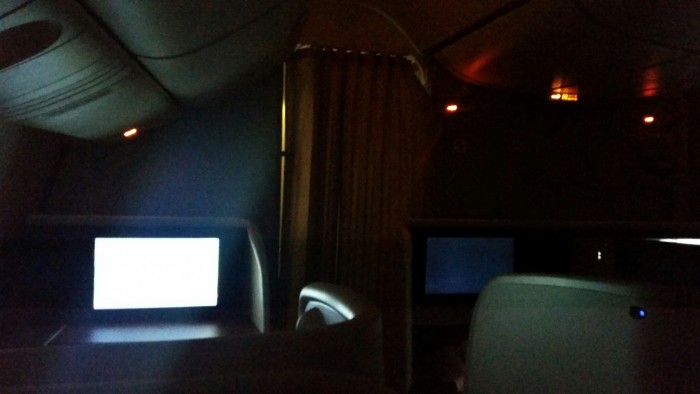 I woke up from my sporadic sleep in time to have breakfast. Sort of. Neither the Japanese nor the Western food options were technically what I would consider breakfast, this despite the flight being scheduled to land at 10am. I pieced together a breakfast of orange juice with bread and butter, but I was disappointed with the lack of a decent meal. The macarons were excellent, though.

And with that JAL first class flight experience, the luxury portion of my trip around the world was over. I still had one more flight left from LAX to San Francisco, but domestic American Airlines first class can’t compare with the international first class I experienced on British Airways, Cathay Pacific, and JAL during this trip.

Overall, I enjoyed JAL’s first class service from Tokyo Narita to Los Angeles, though there were a few quirks such as the slow service, the odd angles of the seat, and the lack of a real breakfast that put it somewhat lower than other first class cabins I have experienced, with Cathay Pacific still being my favorite to date.