On my 3rd day in Japan, Tokyo finally began to wake up a bit from the New Year. Places that had been closed for the first couple of days of the year were finally open again. I spent the day exploring Shinjuku & Shibuya

A visit to the free Tokyo Government Building observation deck 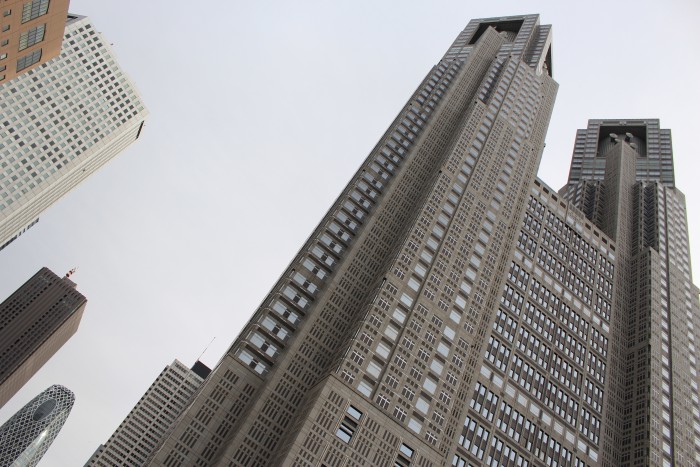 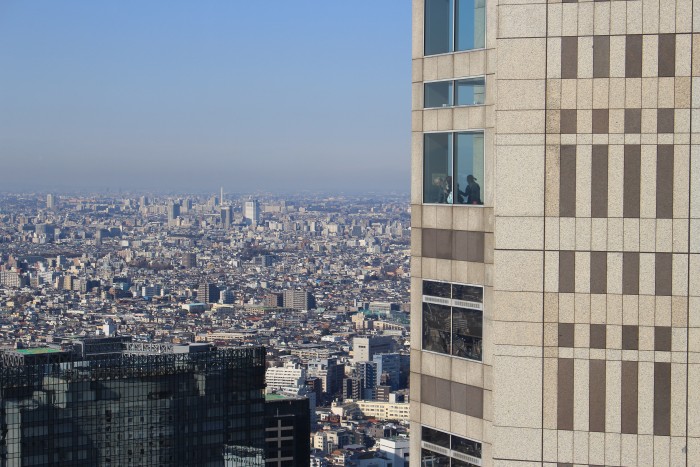 Finding the correct entry to the lobby where the elevators for the observation deck are located was a bit of an adventure, but I eventually found it. As far as I can tell, the best way to access it is from the southeast corner of the south building. There are signs once you get close to it, but you’re on your own getting to there. While walking around the area, I was surprised by how many homeless people were living around the buildings. Up until that point, I had not encountered any signs that anyone in Japan was not living at least an adequately comfortable life. In any other large city, I would not have been surprised to see this, but Tokyo had somehow seemed exempt from other big city issues.

Despite admission to the observatories being free, there was no line whatsoever. There are separate elevators for the observation deck, which is on the 45th floor of the building. The deck takes up the entire floor, so you can get almost 360-degree views of Tokyo, aside from where the elevator bank is located, as well as the space where the other tower is. There is a restaurant and a gift shop as well, but both are in the center of the floor.

I did a lap of the observation deck, taking in the views. Mt. Fuji was faintly visible through some haze. I could also see my hotel below in western Shinjuku. 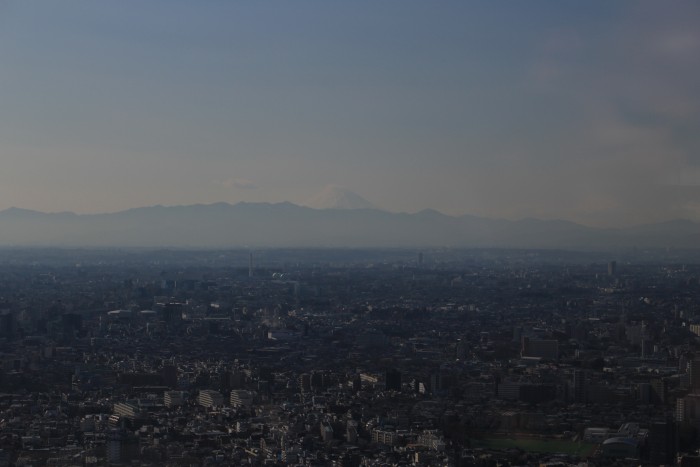 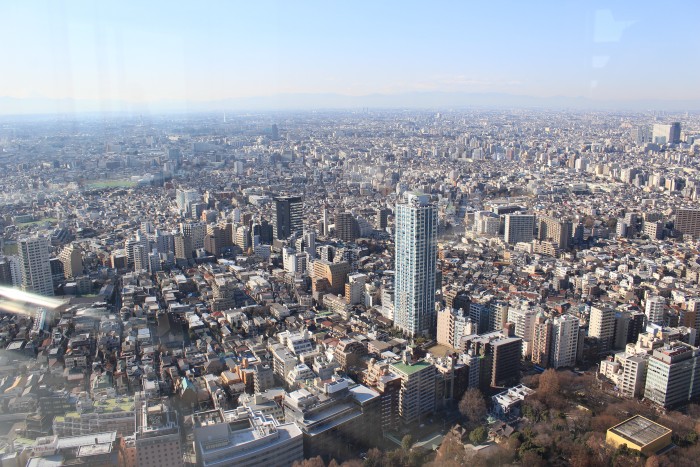 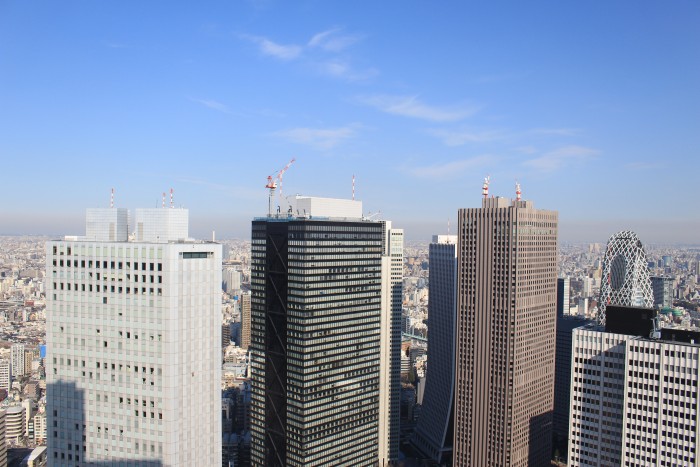 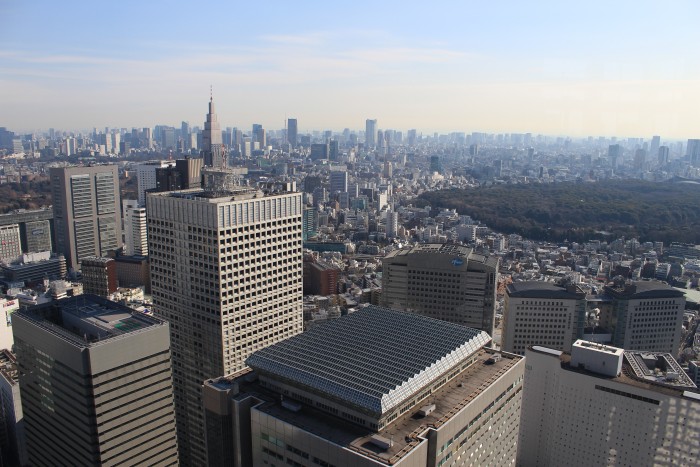 After heading back down to the ground level, I walked to Shinjuku Gyoen National Garden, which is on the eastern side of Shinjuku. Despite being a massive park, access is actually limited, as there are only 3 gates into the park. Only one of these is on the south side of the park, which is where I was coming from. As a result, I walked a good way around the perimeter fence before arriving at the Sendagaya Gate.

The National Garden is a vast space filled with grassy areas, trees, and other gardens. There’s also a greenhouse inside. Originally a private garden, it was turned into a national garden after World War II. The Shinjuku Gyoen National Garden is reminiscent of New York’s Central Park in that the tall buildings of the city edge right up to the park, which provides a quite refuge from the rest of Tokyo. 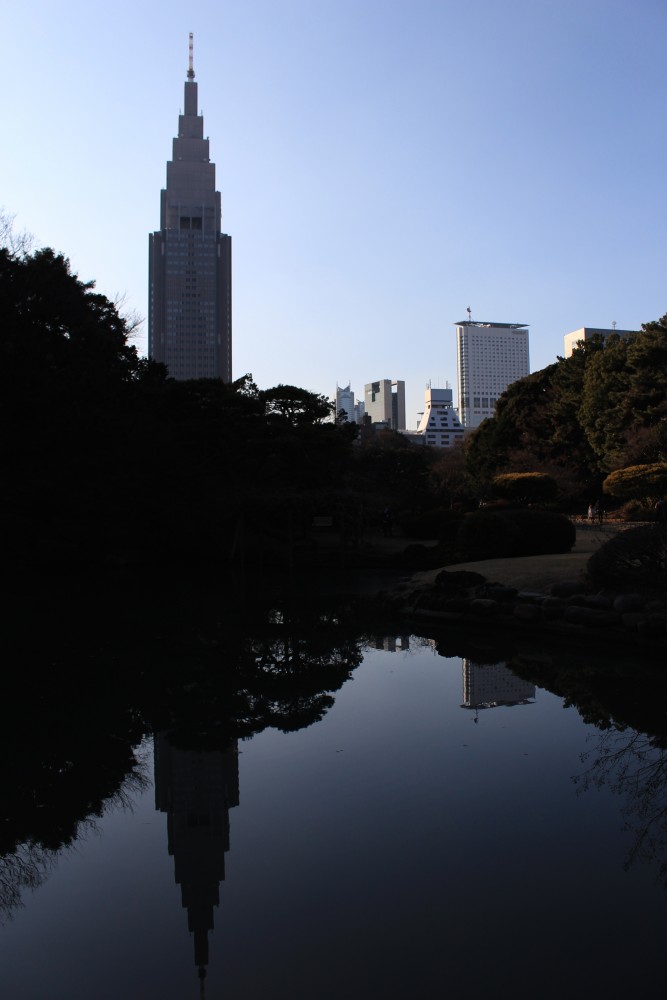 I had a snack from one of the park’s cafe’s as well as one of the best items from Japanese vending machines – warm drinks. Vending machines keep our drinks cold without any question, so when you think about it, there’s no reason why they can’t keep them warm as well. I had a heated can of hot cocoa, perfect for a cold January day in a park. I would have warm drinks from vending machines several times during my trip. It’s just one of the many ways that Japanese technology is ahead of the United States.

I first explored the Japanese Traditional Garden section of Shinjuku Gyoen, which was the most crowded outdoor part of the park. Due to the season, the grass was brown. 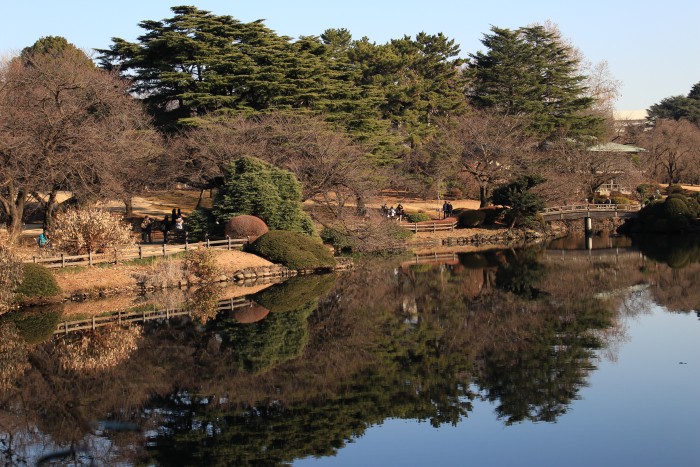 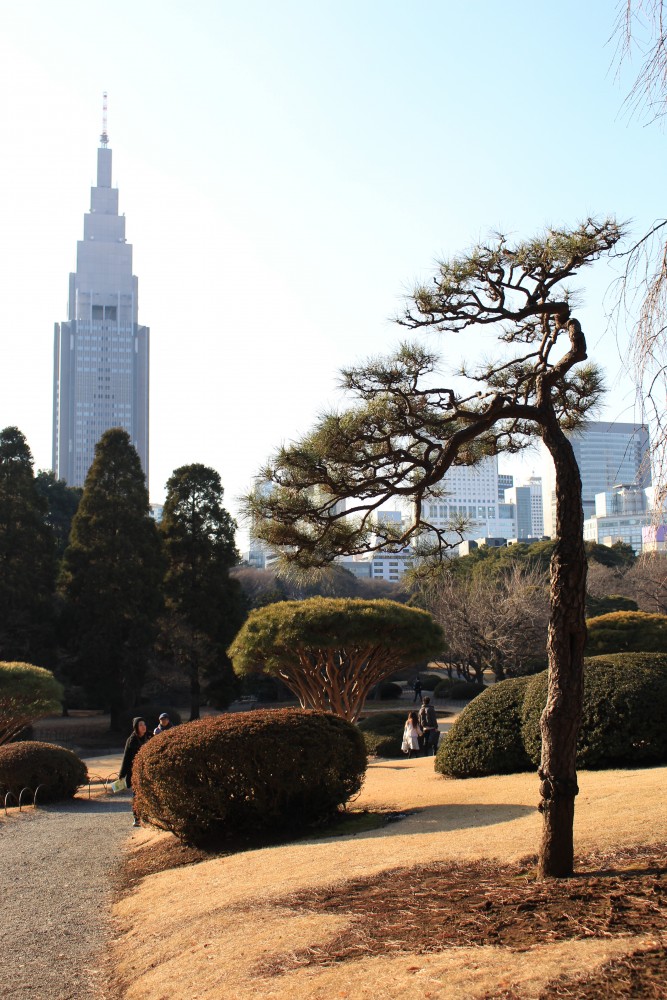 Done with the traditional garden, I backtracked toward the greenhouse. I got there about a half an hour before it was scheduled to close. The greenhouse was rather large, and it was of course warm inside. With the warmth came humidity, so my camera lens instantly fogged up. I still took a few photos, though they look slightly like they were taken inside a television dream sequence. 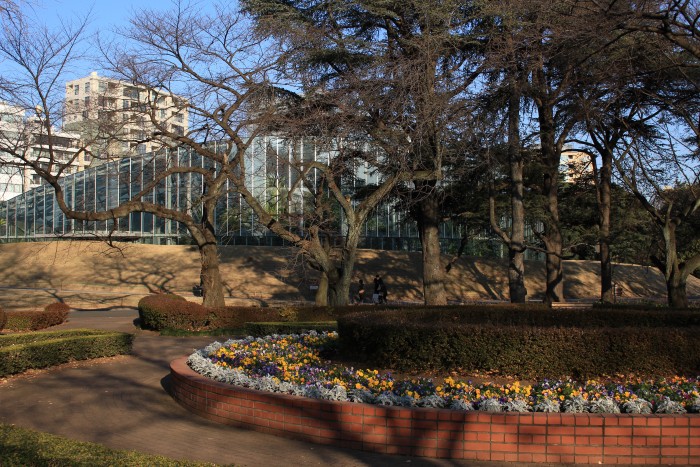 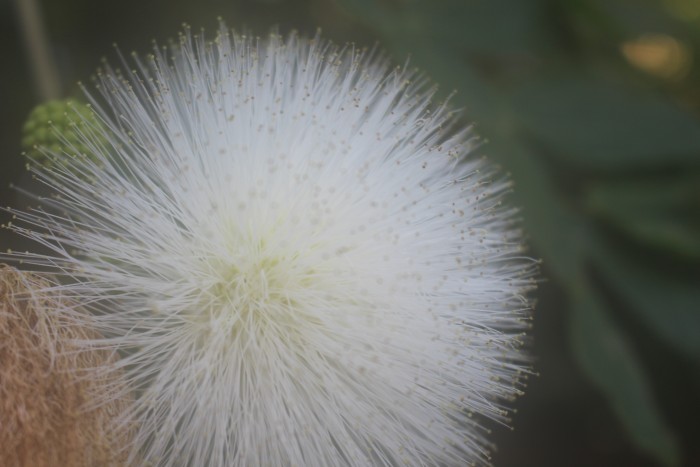 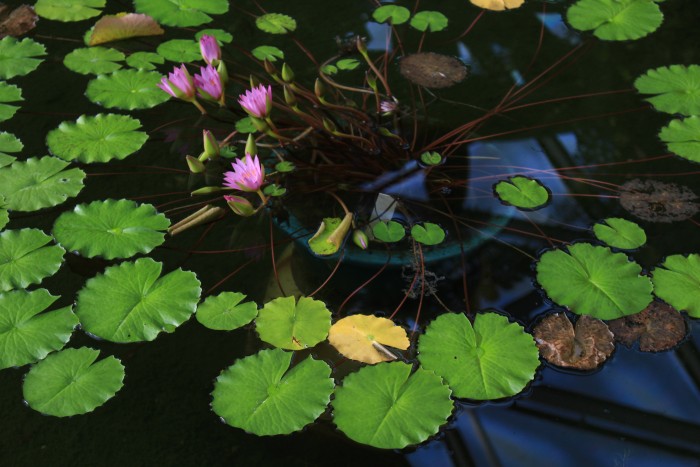 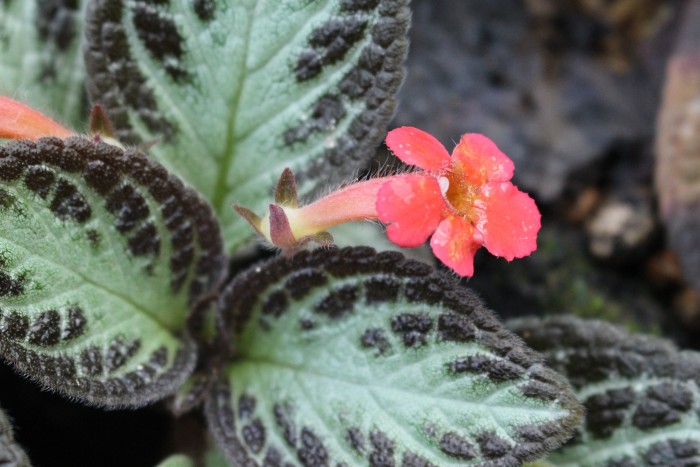 With the limited winter daylight fading, I went for a few beers at the Watering Hole, a local craft beer bar. Read more about my recommendations for craft beer in Tokyo.

From there, I hopped on the Tokyo Metro at Yoyogi and took it a couple of stops to Shibuya. While it had been a quiet evening elsewhere, this was not the case here. Shoppers packed the streets, criss-crossing the fabled wide intersections of the district. I found myself a place where I could stand out of everyone’s way, and spent a while taking photos of the scene. 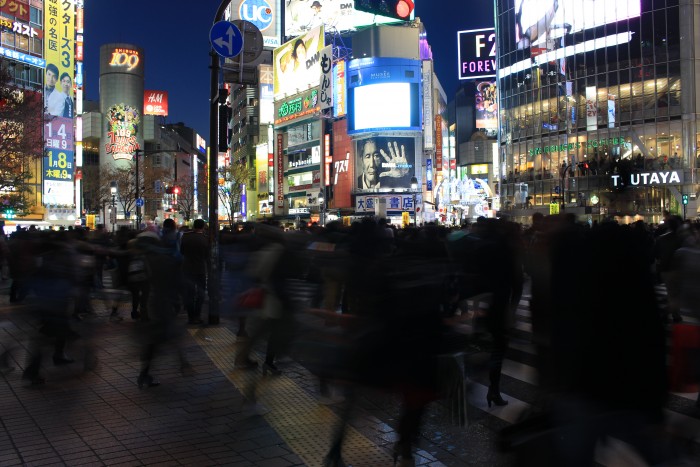 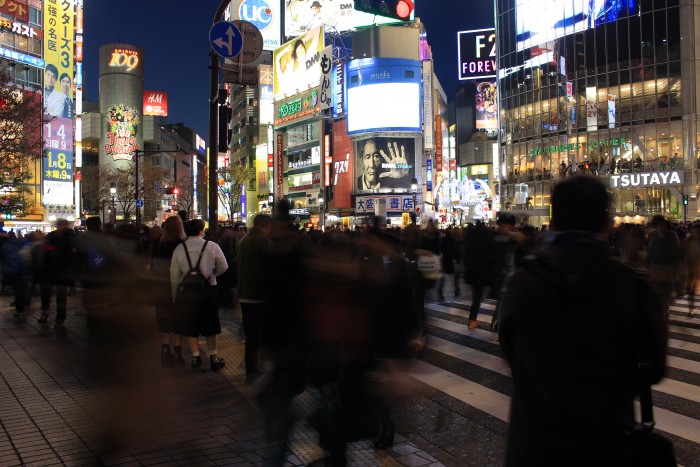 Once I’d had my fill, it was time for dinner. I wandered around for a while, then passed a sushi place that caught my eye. Inside, customers were ordering from machines. Not one to pass up an opportunity to try out Japanese technology, I had to go in. 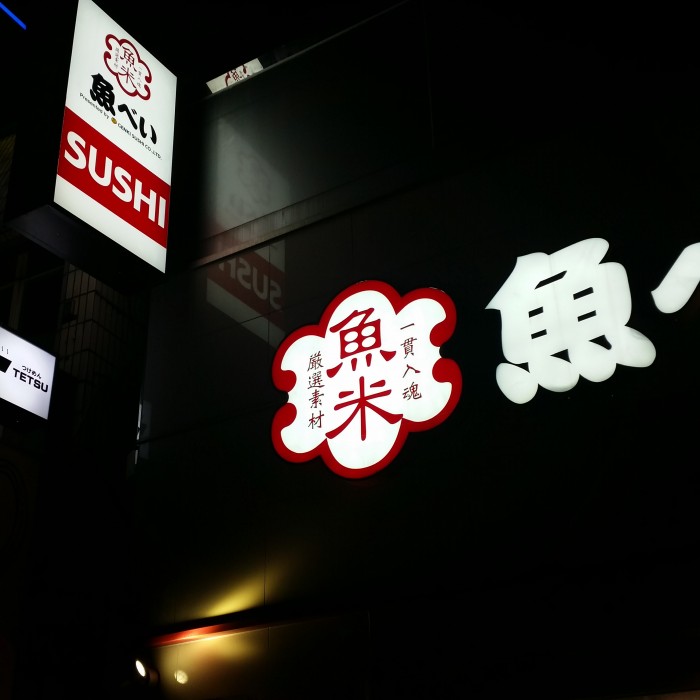 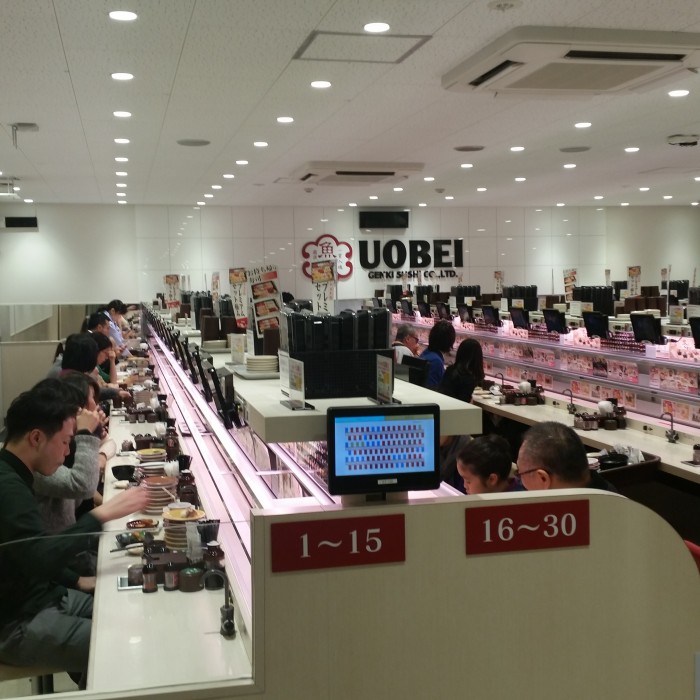 The restaurant, called Genki Sushi, combined the best of automated ordering & conveyor belts. Ordering is simple. You select up to 3 items at a time off of a touch screen, and the items are then prepared made-to-order & sent to your seat via a conveyor belt. It eliminates most of the need for servers, while still allowing for sushi to be prepared fresh. There was even a game to play while I was waiting for my food. 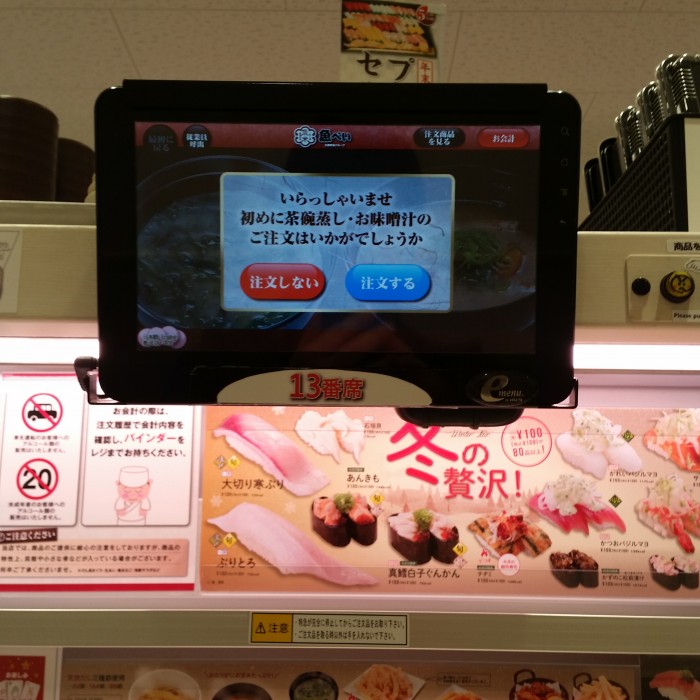 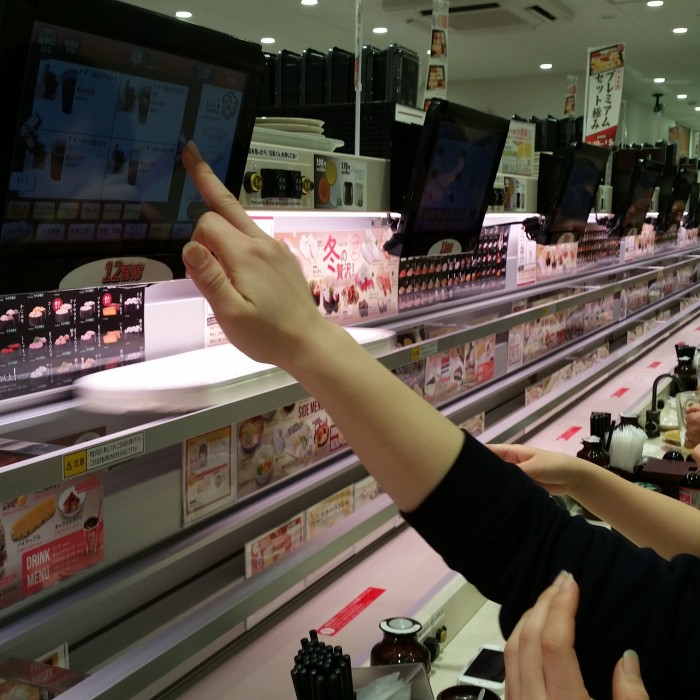 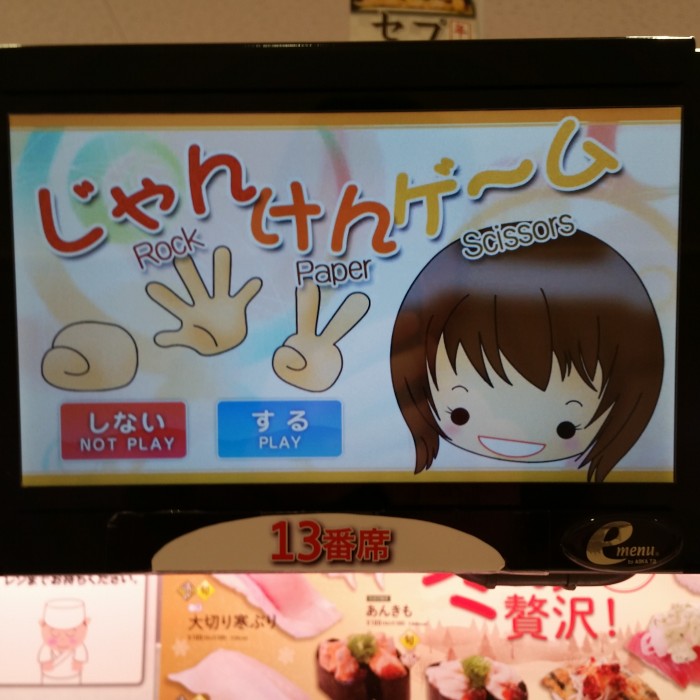 The ordering screens did have some English, though not all of the instructions were 100% clear. For example, it took me a few minutes to realize that I needed to press a button to send the tray back to the kitchen once my plates had been delivered.

The machines would later exact retribution on me. Each time I ordered 3 items, I would then remove them from the tray and place them in front of me. Having only 2 hands, I would take 2 plates down, and then take the 3rd separately. On one of these orders, I grabbed 2 plates, only to have the delivery tray immediately shoot back toward the kitchen. I let out what can only be described as a loud, surprised yelp, and sat there looking at the guy next to me, questioning if he had just seen what had happened. The man helped explain to the server what had happened, and a minute later, the tray came back. A minor delay, and entertaining, until the robots try to kill us all someday down the line. 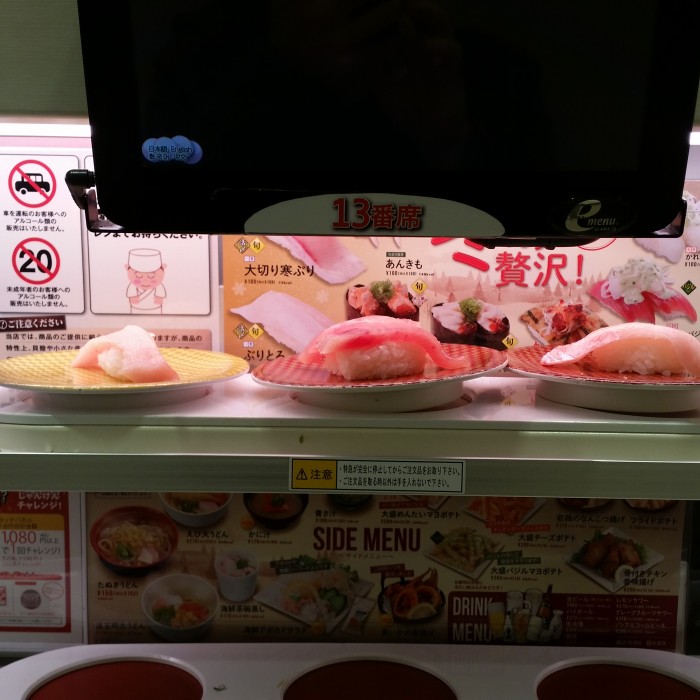 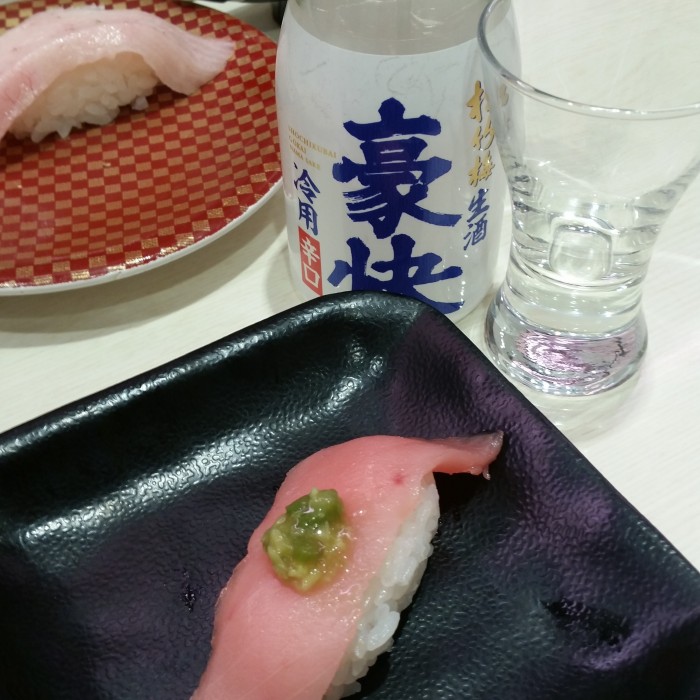 I ate, and I ate, and I ate until I was full. That’s a lot of sushi. Despite the amount I ate, plus the sake I had to drink, the total cost was only ¥2115, which was about $17.60 USD at the time. Tokyo’s reputation as an expensive city is long gone.

I spent the rest of the night exploring Shibuya, which has several great bars, before heading back to my hotel in Shinjuku to rest up for my adventure the next day.