After having spent several hours visiting the British Airways Lounge at SFO, it was finally time to set off on my trip around the world. My first flight was from San Francisco to London Heathrow on British Airways in First Class on a Boeing 747.

While I have flown in first class domestically and in business class on long-haul transatlantic flights, this was my first trip in such a nice first class international cabin.

The first class cabin’s seats were open suites in a rough 1-2-1 layout in the nose of the BA 747, but the first 3 rows did not have middle seats due to the nose taper. I was in seat 2A, and I had two windows to look out of (with a shade, if necessary). Apologies for some of the blurry photos, the mood lighting was not the best for photography, and I didn’t want to look like too much of a newbie by taking tons of photos of my flight in first class on BA. 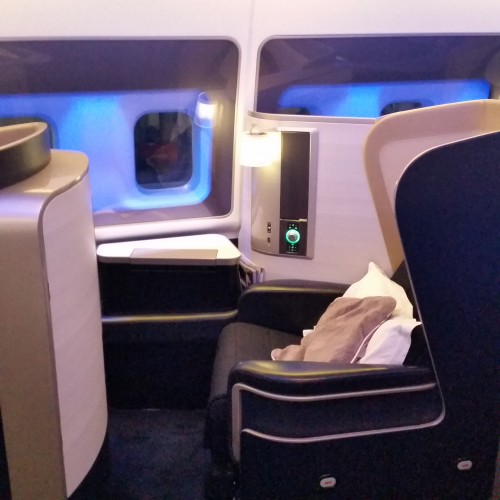 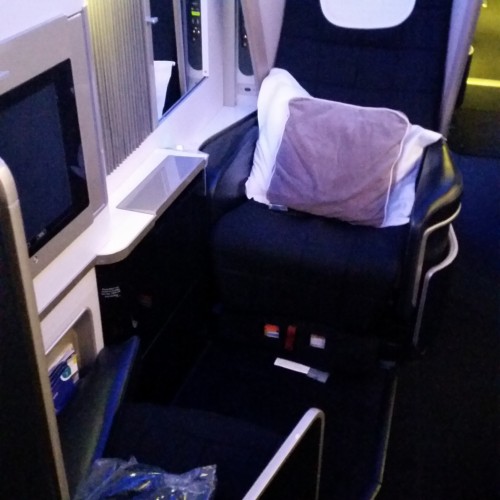 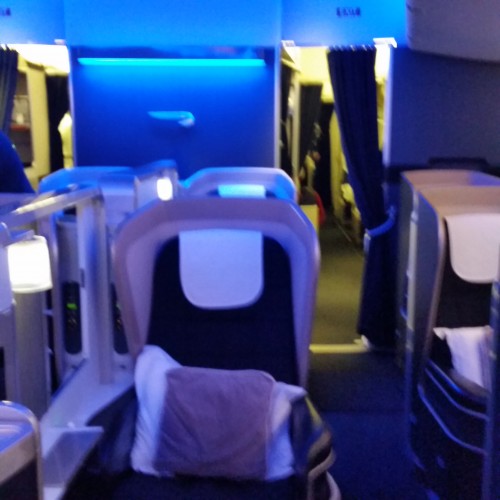 I settled into my seat, but not before taking a few more photos of my BA first class 747 home for the next 10 hours or so. If you’re going to spend that much time in one place, I recommend a seat as comfortable as this one. 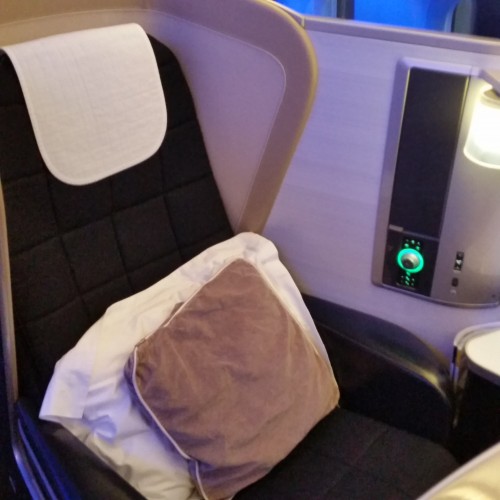 Between knowing I was about to depart around the world on a 3.5 week trip & it being my first time in international first class, I was pretty damn excited by this point, so I drank another glass of champagne while examining the BA first class amenity kit and all of the various buttons and dials available for my seat. 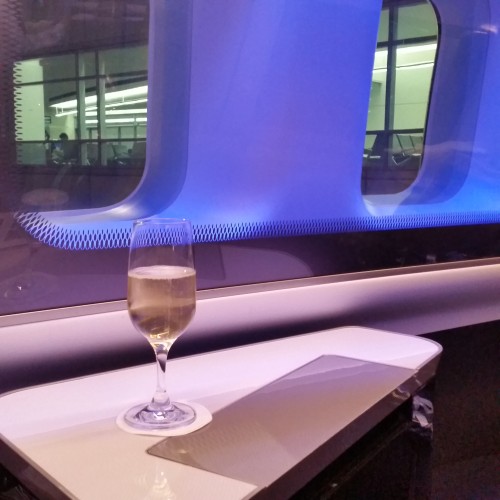 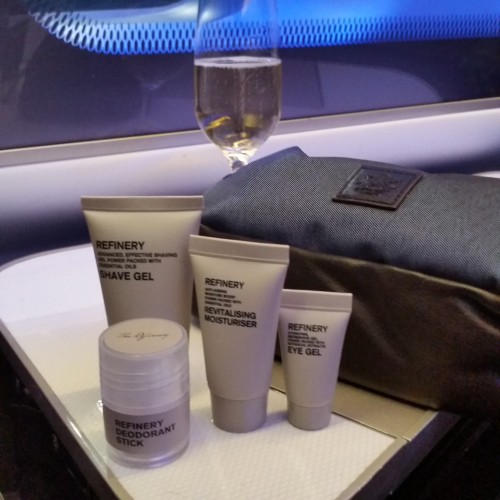 The amenity kit came with several Refinery products, along with helpful instructions for those like myself who have no idea what eye gel is. 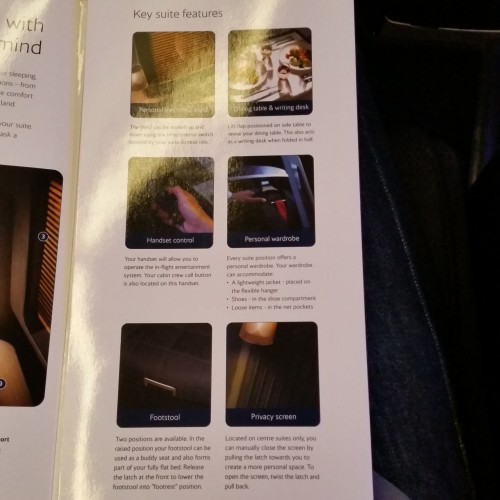 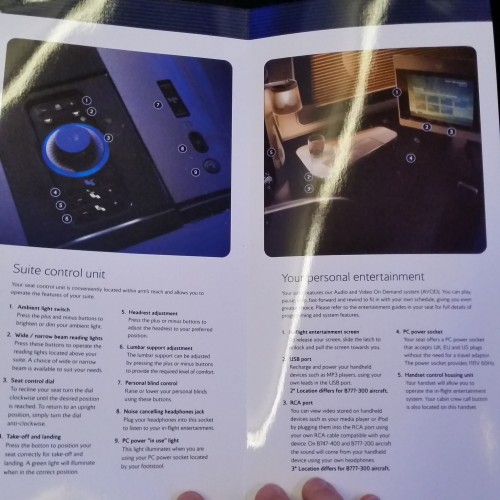 If you like gadgets and reading about them, the British Airways First Class 747 suite is perfect for you! 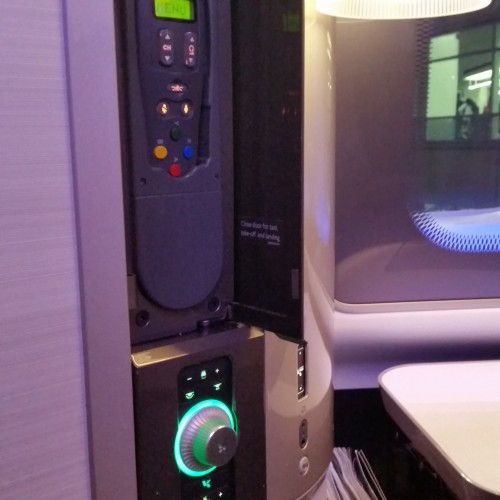 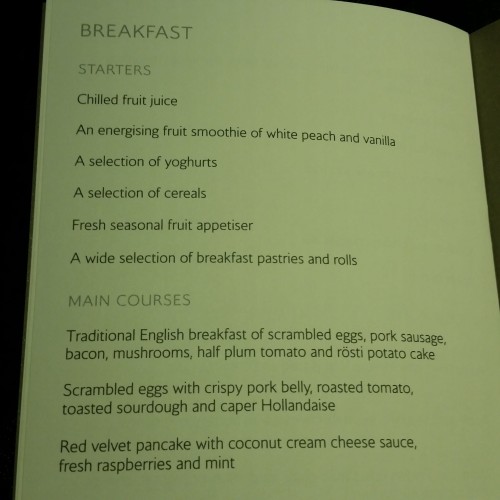 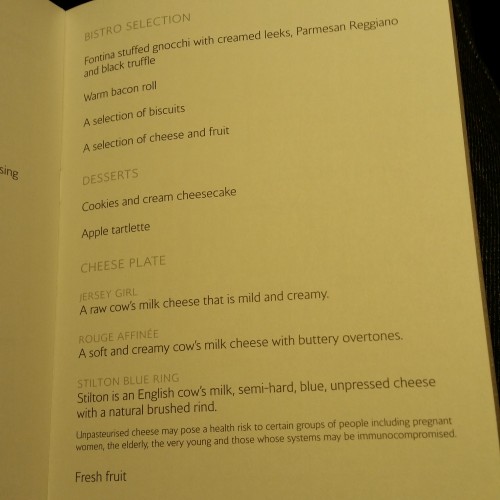 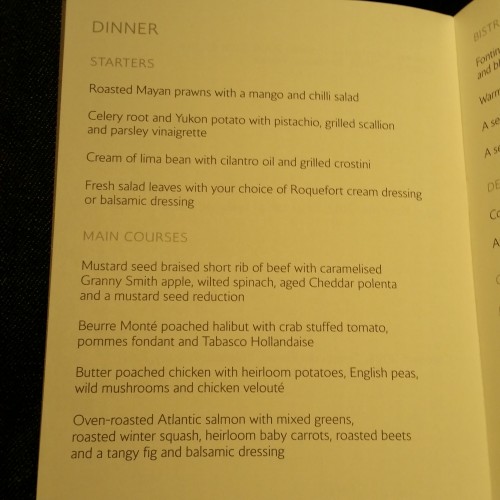 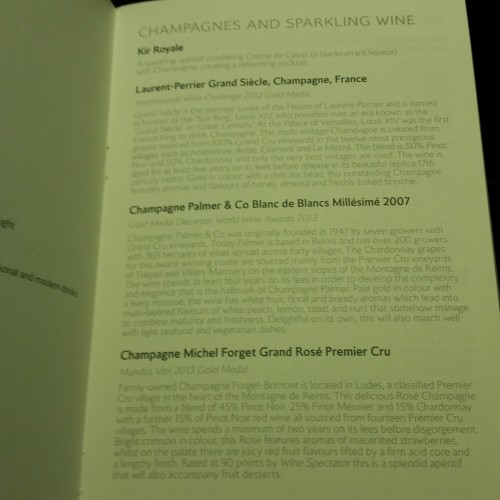 We took off, and it wasn’t long before we started to experience some slight turbulence. Undeterred, the British Airways first class flight attendants began to take food orders & served drinks with warm nuts. 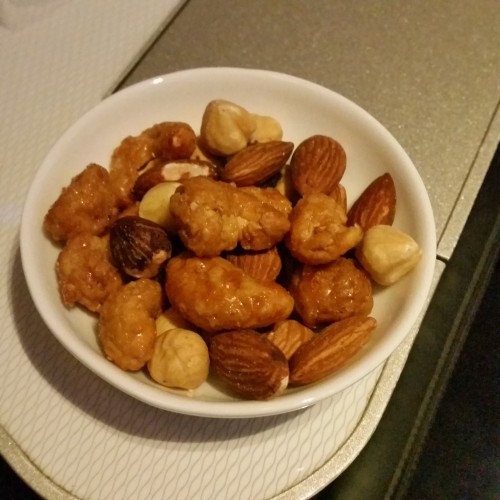 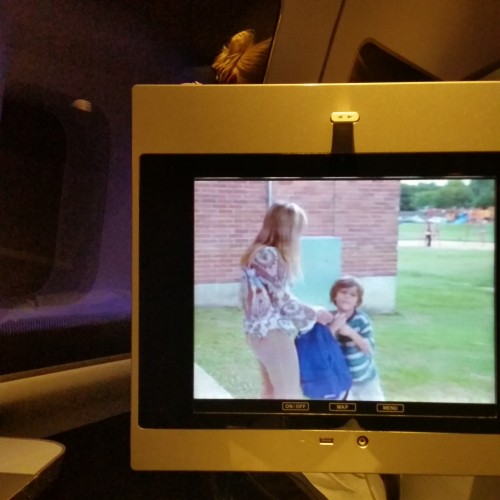 While I was waiting for food service to begin, I started watching Boyhood, which I highly recommend. Everyone should be able to identify with some aspect of the film, and the music was the soundtrack to the previous 12 years of my life as well. The only issue was that it’s a long movie, so I ended up being the last active person in the cabin. I got the sense the flight attendants wanted everyone to be sleeping, since they came by every half hour or so to ask if I wanted my bed made. I normally stay up late, so I was in no hurry.

Below you can find photos of the BA first class meals I had on the flight from San Francisco to London. I enjoyed all of it. Except for that rogue tomato. Seriously, stop with the damn tomatoes, everyone! 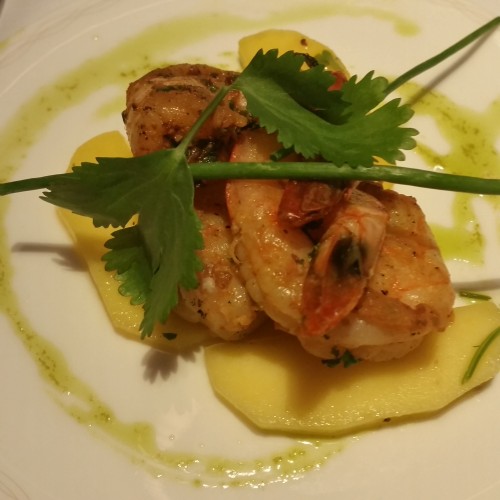 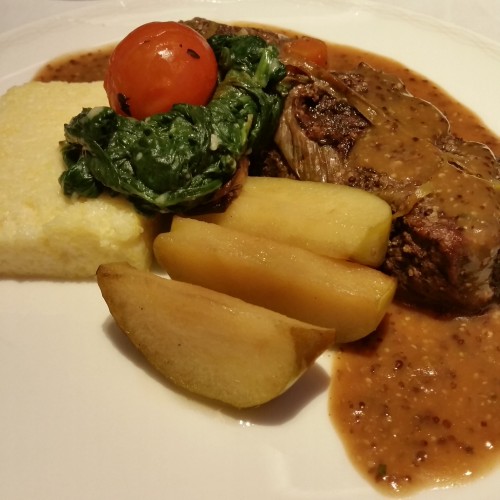 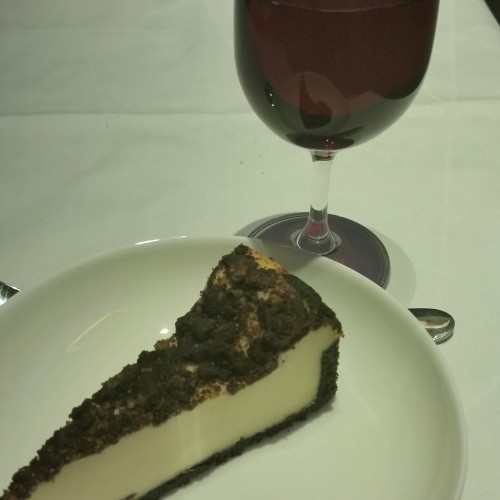 My go-to last drink on a long flight is port. I love port in general, but there’s just something about it right before heading to sleep that is nice. It’s a warm, comforting drink, especially when paired with a dessert (and first class seating doesn’t hurt either!).

Now normally this is where I would say I went right to bed and then woke up in time for breakfast, but unfortunately that would not be the case on this flight. Earlier I mentioned how there was turbulence as soon as we took off. That turbulence never let up for the entire flight from San Francisco to London. It was never severe enough to stop service, but it was more than enough to spill drinks that were filled more than 2/3rds full. The tablecloths served valiantly that day, soaking up large amounts of everyone’s beverages.

The British Airways first class cabin crew did a great job despite the difficult conditions, constantly apologizing (errr.. apologising) as if there was anything they could do about it.

I would find out later that this particular evening was one of the worst for turbulence in recent memory. Frequent-flier Lucky from One Mile At A Time happened to be in the air over the north Atlantic at the same time as I was & posted that it was one of the longest periods of turbulence he had ever experienced. This was coming from a guy who spends large portions of his time in the air. Other fliers noted the same thing in the comments. We were all just unlucky to be flying on that particular night. Of course, while I may have been unlucky to encounter that turbulence, I was still fortunate to be flying in BA first class on a 747 from San Francisco to London, so really, how much can I complain?

I dozed a little bit on and off, but I didn’t end up being as well-rested as I had hoped. Breakfast-time came around, and I opted for the English breakfast despite its inclusion of a tomato. 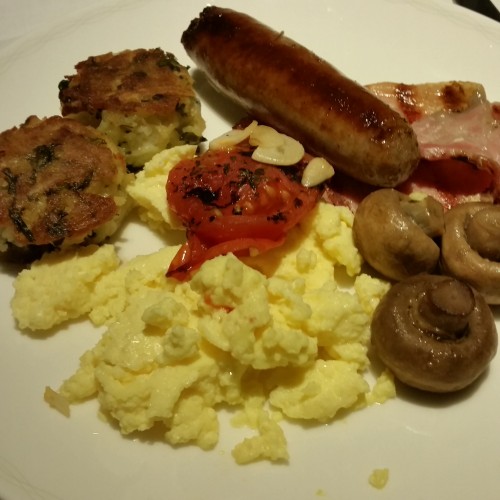 Despite the turbulence, my experience in BA first class on a 747 from London to San Francisco was good. I have since flown in more impressive first class cabins with better food menus & service, but it was a good introduction. Plus, it’s always great to fly on a Boeing 747 as more and more are being retired.

My plan for the short day in England was simple: go to my hotel at Heathrow (the Sofitel at T5, since I would be heading to Madrid for a layover early in the morning), drop off my things, then take the Underground into central London to Shepherd’s Bush so I could have dinner and a few beers at Brewdog. While I was indeed able to have a nice evening of British beer and haggis spring rolls while listening to The Darkness, I ended up getting there about a half hour later than I had planned. 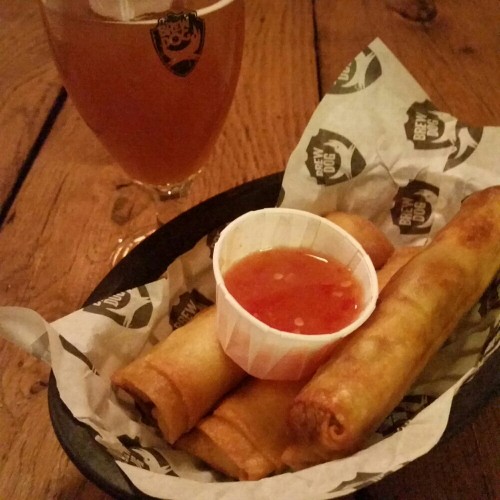 The reason? The most thorough customs inspection I have ever had.

I went to school in Scotland for 2 years, so I am well-versed with the United Kingdom’s immigration procedures. I’ve had to deal with student visas, and then in subsequent trips, likely having been marked as someone who had previous visas & connections in the country. It’s never been a huge deal, but I can usually tell that I’m being asked additional questions upon entering the UK.

This time it was different. I went through passport control and had the easiest time I’d had in several years. I went to baggage claim and headed for customs. My bag came out quickly, and I thought that I was going to go from the plane to my hotel in about 15 minutes total. I was nearly to the door of customs when I heard someone say “Sir! Sir!”. At first I had no idea that the woman was talking to me, since I had no reason to expect anyone to be talking to me at that point.

Once I realized I was the one she was addressing, I stopped, and she led me over to a table in the customs area. A lower-level employee joined her, and the two of them then proceeded to go through every one of my belongings while also asking me questions about my trip and what I did for a living.

The search was seriously thorough. They ran their fingers along my toothbrush, I assume in case it was a weapon of some sort. They flipped through the book I had on me, in case I had hollowed it out to smuggle something. They opened and examined all of my toiletries and medications as well. The 2 inspectors of course found nothing, but this all took around 30 minutes.

I don’t know if I can chalk this up to bad luck, or if I had triggered something and had been watched through all of Heathrow airport. I suppose I will find out the next time I go to the UK. My advice for all travelers is to make sure you have your full itinerary printed out, and possibly even include a bank statement so they know you’re not trying to stay in the country. You probably won’t need any of this, but it’s good to be prepared. I get why someone traveling alone in first class, entering the country for less than 18 hours while carrying more than 1 day of luggage might arouse suspicions, but it was unfortunate that it cost me so much time on my short London layover.

Still, I enjoyed my brief time in London after my BA first class flight from San Francisco, and despite yet again not sleeping much that night, it was time to head to Madrid early in the morning.