Home
Trip Reports & Photos
About
About me

Hi. I’m Jonathan Sacks. I currently live in San Francisco, California, after having previously lived in New York, Arizona, and Scotland. I love to travel. That should be fairly obvious, as I have started a travel website. It would be pretty idiotic to write about something I didn’t enjoy. If you’re wondering where my blog name “Everybody Hates A Tourist” comes from, it’s a reference to a line from the song “Common People” by Pulp.

Everybody hates a tourist, especially one who thinks it’s all such a laugh

The name is sort of a joke, but also sort of a reminder that traveling is more than just going to a different place, it’s also getting to know a place & not judging it or making fun of it just because it is different. To me, a tourist is someone who gets shuttled from place to place for quick visits without ever really interacting with anyone who isn’t part of their tour group.

I’ve always enjoyed traveling, and I’ve always enjoyed writing, back as long as I can remember. My writing has been featured in the Arizona Republic & other outlets. In 2021, I was shortlisted for a Traverse Creator Award for Best Storytelling.

Here are all of my favorite posts from over the years.

I don’t consider myself a country counter, as I’m not going places just to check off lists. I like going to back to places just as much as I enjoy going to new ones. However, people do frequently ask me about how many countries I’ve been, so here you go. So far, I have been to 40 countries, plus another 10 major territories and 41 states of the United States of America. For countries I have used the UN list, while territories follows the Travelers’ Century Club list and criteria. Here are the countries & territories I have traveled to thus far, in order:

Create your own visited states map or check out the JavaScript Charts.

I’m sometimes asked about how I afford to travel, and my best answer for that is value travel. Value does not necessarily mean being cheap. Value is getting the most out of your budget, whatever that may be. I do enjoy using airline miles to fly in business and/or first class. Booked properly, these tickets get the highest value for your miles. Many of these miles came from signing up for credit cards, though there are plenty of other ways to earn free travel.

Where I do like to splurge is on local experiences. When you travel to a place, that’s your once-in-a-lifetime opportunity to try their foods and learn their history and customs. When will you get that opportunity again? Eat where the locals eat. Drink where the locals drink. Walk or climb to the highest point to get that great view. Go to a local sporting event. Learn some history. Venture to the neighborhoods where the locals live. Look up. Look down. Don’t be afraid to get lost every now and then. You’ll be glad you did. 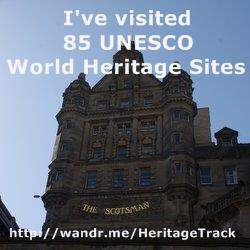