After landing in Hong Kong on Cathay Pacific, I only had about two hours until my next flight to Tokyo Narita. I was worried that I wouldn’t have much time to visit one of the most talked about airline lounges in the world, but this was not the case. Thanks to being the first person off the plane I breezed through the security check and headed straight for The Wing, Cathay Pacific’s flagship first class lounge at their home airport in Hong Kong. 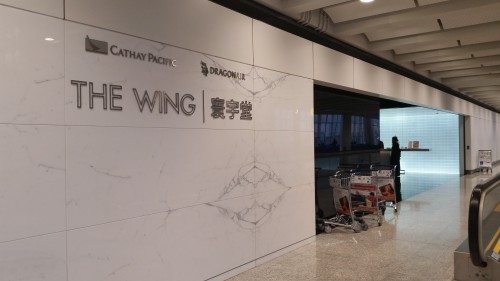 This is where I mention that I screwed up. I landed around 6 a.m., and as a result, I arrived in Hong Kong just in time to see the sun rising. The islands were filled with a pink & orange glow that was truly magnificent. It was a sight I will never forget. I only wish that I had stopped for 2 seconds to take a photo so I could share it with all of you rather than just describing it. The lesson here is that if you see something that you think is worth photographing, do it! It seriously won’t take long, and you’re not going to miss out at the other end. Even if I had arrived at The Wing 2 minutes later, it wouldn’t have mattered.

You can get some sense of the sunrise from this photo of the Cathay Pacific Boeing 777 I had arrived on from Frankfurt, but the sky wasn’t quite yet lit up in the same way. 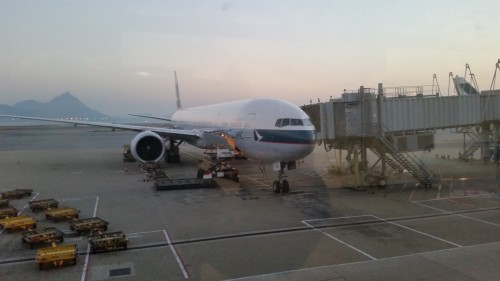 Once I got to The Wing, the Cathay Pacific staff checked me in and directed me to the first class area.

I passed the champagne bar (which I skipped, as it was 7am), as well as the main first class seating areas. 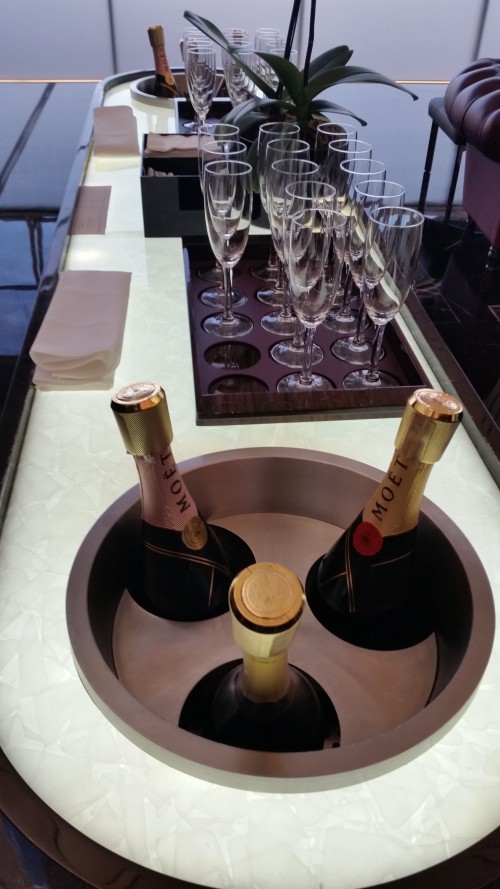 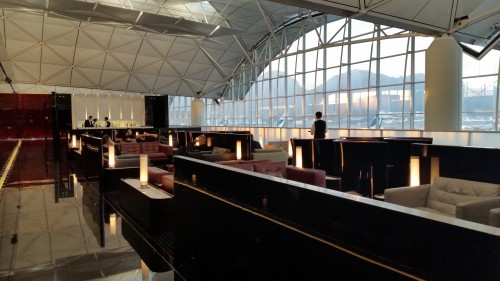 By this point, I had just been on a flight for 12 hours, slept in my clothes, and been traveling for around 18 hours. Cathay Pacific had me covered. I headed straight for their cabanas, hoping that I could score one in my limited time between flights. As luck would have it, there was no wait.

Cathay Pacific’s first class cabanas in The Wing in Hong Kong are spectacular. They’re basically an entire apartment inside the airport, complete with bathroom, sitting area, shower, and full bathtub. The entire cabana was almost as large as my apartment back home, which says a lot about both the cabana and my apartment. 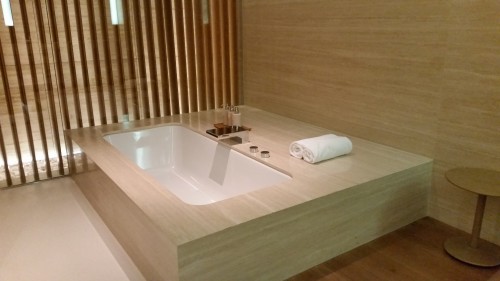 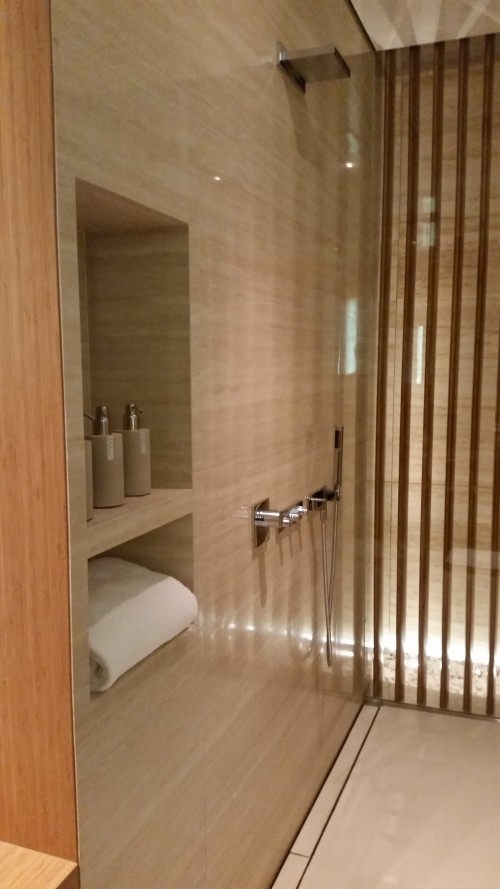 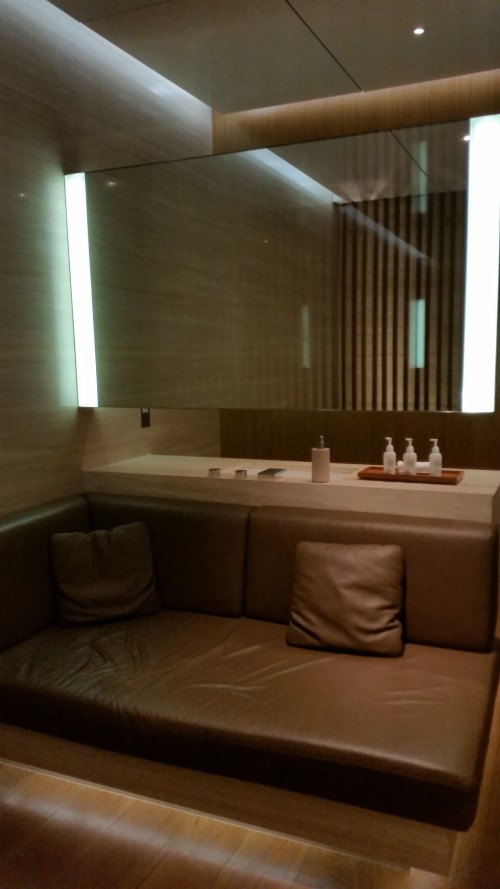 If I’d had more time, I would have had a relaxing bath, but instead I got over the fact that it’s weird to be naked in an airport, took a quick shower, then set off to explore the food options. 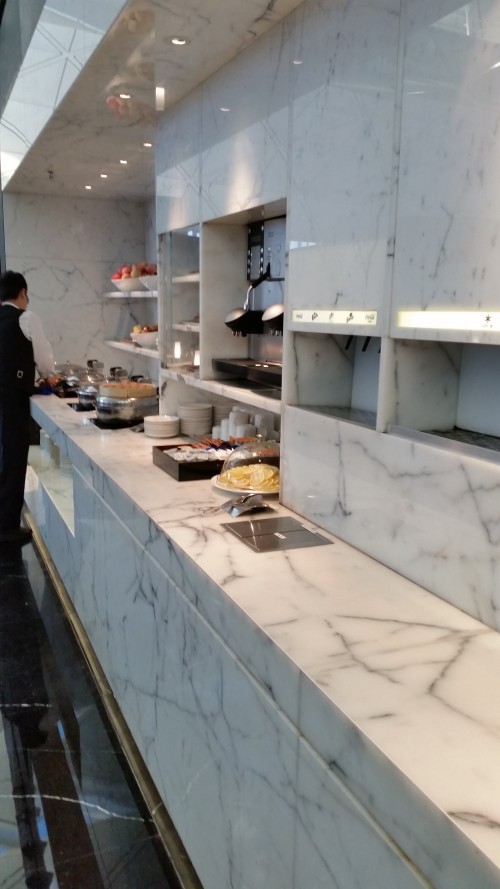 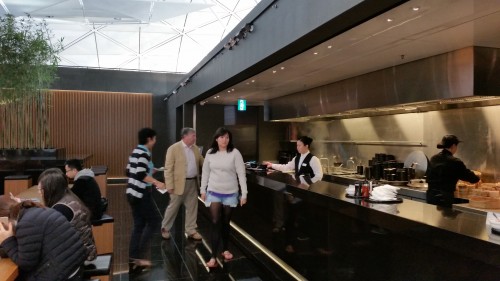 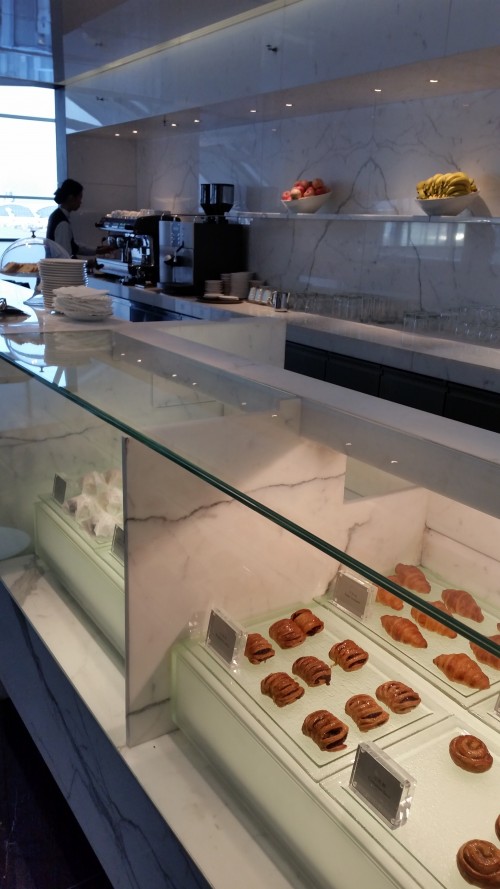 As was the case in the lounge in Frankfurt, The Wing in Hong Kong had noodle soup. There was other hot food as well, but the soup looked good, so I hydrated more & had it again along with a ginger beer. 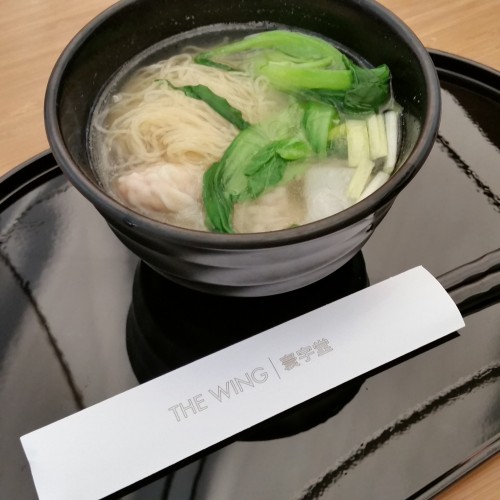 Unfortunately, I didn’t have much more time to spend in the lounge. Both my incoming & outgoing flights were completely at the other end at the terminal in Hong Kong, so I had to leave to make my flight to Tokyo Narita in time. Still, The Wing was everything it was hyped up to be. While there are other Cathay Pacific lounges in the airport in Hong Kong, I was glad to be able to run over and check out The Wing. I’ll save the other lounges for my next visit. This time, I was off to Japan for the next couple of weeks.