My brief layover in Hong Kong & visit to the Cathay Pacific The Wing Lounge was over, it was time to board my next flight. I flew from Hong Kong to Tokyo Narita on Cathay Pacific once again. This time, I was in business class on their Boeing 777-300. 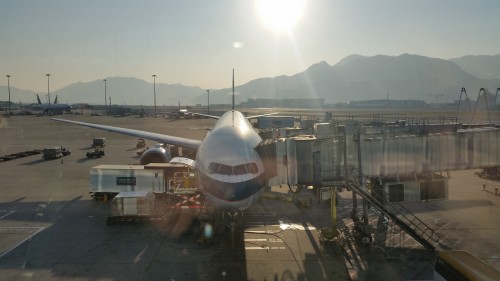 This was the flight where I hit a bit of a wall. Although the day was just starting in Asia, I was still on European time. I napped a bit on the flight, which ended up being the perfect amount of sleep to let me start my time in Japan with zero jet lag. 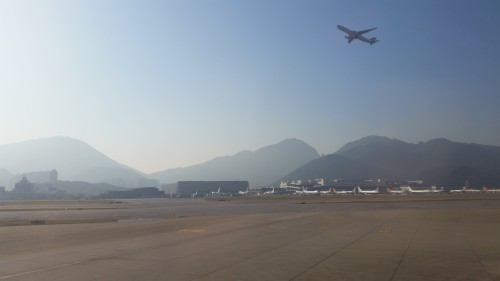 Perhaps it was because my previous flight has been in the outstanding Cathay Pacific first class product, but the business class cabin on this flight felt a bit dated. This was surprising, as Cathay only started introducing this version of seats on their regional flights in 2013, so you’d expect a bit more of a modern feel. The seat was comfortable enough, but the seat moved in an odd way. Perhaps there were not as many portions to the seat as some other premium cabins I have been in, but it took me a while to find a position that was right for me. The fabric seat cover was also a bit itchy, but overall it wasn’t a bad seat. 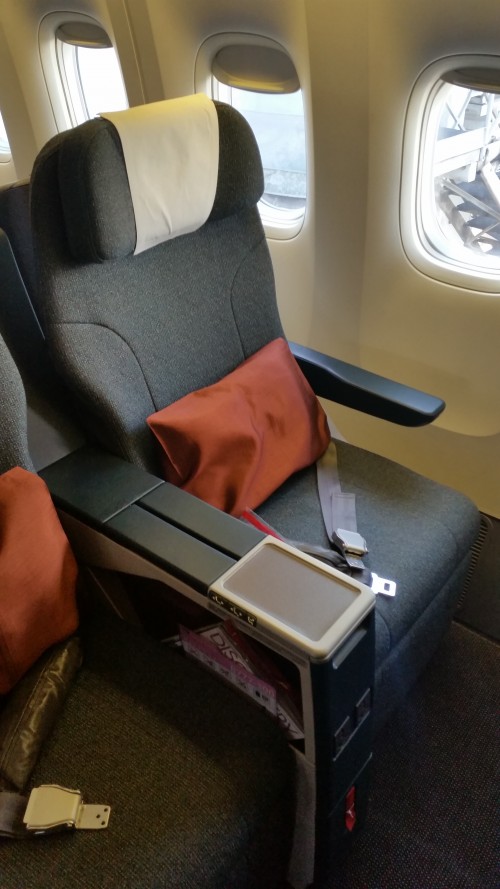 Even the video screens looked a bit dated. 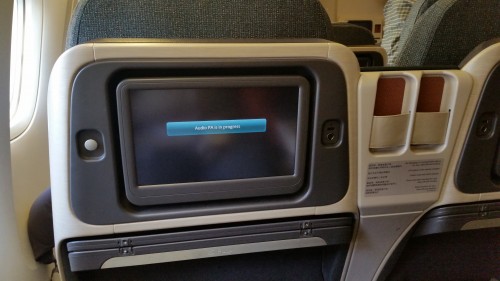 The business class seats were in a 2-3-2 configuration since it was a regional Cathay service from Hong Kong to Tokyo Narita, but I sat at a window and ended up with nobody next to me. 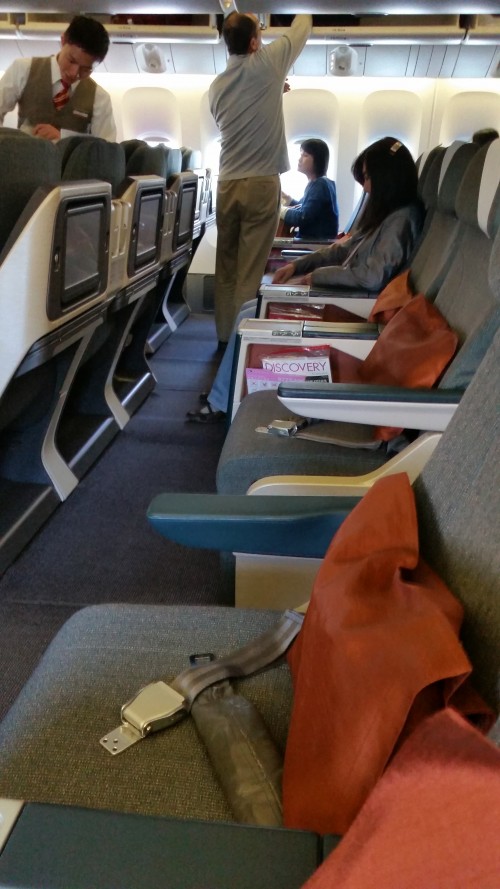 Despite having eaten a lot on my previous flight, as well as a bit in The Wing lounge in Hong Kong, I still ordered food, which I ate some, but not all of. Here is the business class menu for my Cathay Pacific flight from Hong Kong to Tokyo. 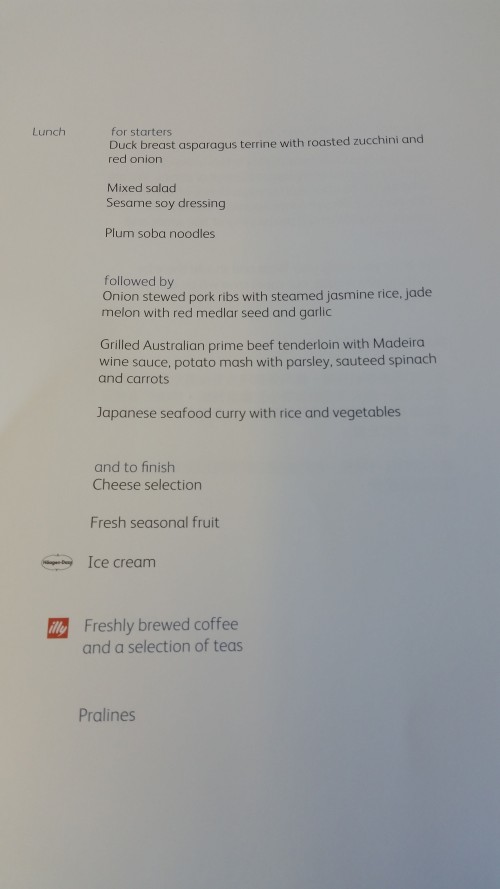 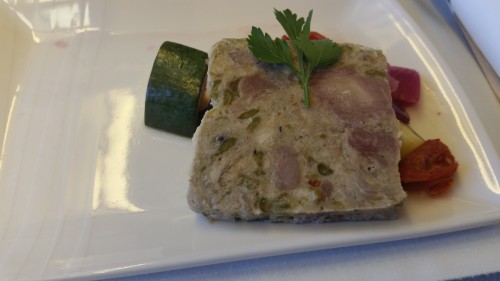 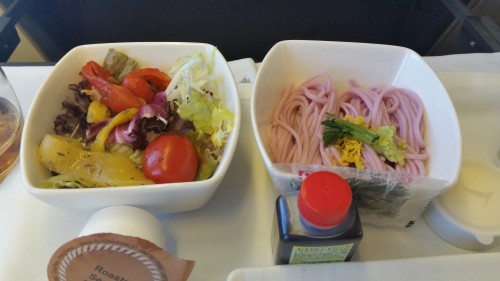 For my main course, I opted for the pork ribs and jasmine rice. 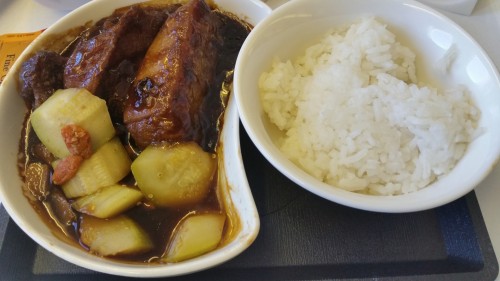 Given that Cathay Pacific has excellent service, the flight attendant asked me if everything was ok, since there were some items I had barely touched. I explained to him that I had just flown from Frankfurt to Hong Kong, so one person could only eat so much, and he understood.

The flight from Hong Kong to Tokyo was around 4 hours, which was easy by this point in my around-the-world trip. Between the meal service and dozing a bit, the time went by quickly.

As we landed and taxied at Tokyo Narita, I noticed this lone structure in the middle of the airport. I wouldn’t have thought much of it, had there not been a massive sign reading “Down With Narita Airport” hanging from the fence. 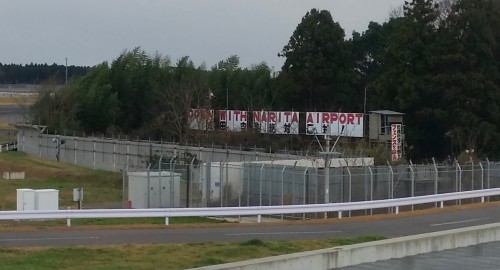 There are in fact several blocks of land in the middle of Narita that have not been developed as part of the airport. The holdouts include farmers who refused to give up their land, instead launching an ongoing, decades-long protest over the expansion of runways. Despite some of the construction eventually taking place, the farmers have had some success in delaying and limiting projects, and the banners have not gone away.

There is even a shrine called Toho Shrine that is completely surrounded by high-security fencing. Here’s a fascinating read about it, complete with photos. You can clearly see it on Google Maps as well.

It’s a good reminder that these interactions between the government authorities and local residents happen near airports all over the world. It’s easy to pass through an airport and never think about what goes on around it, but the truth is there are people who have to deal with its presence, for better or for worse, every day.