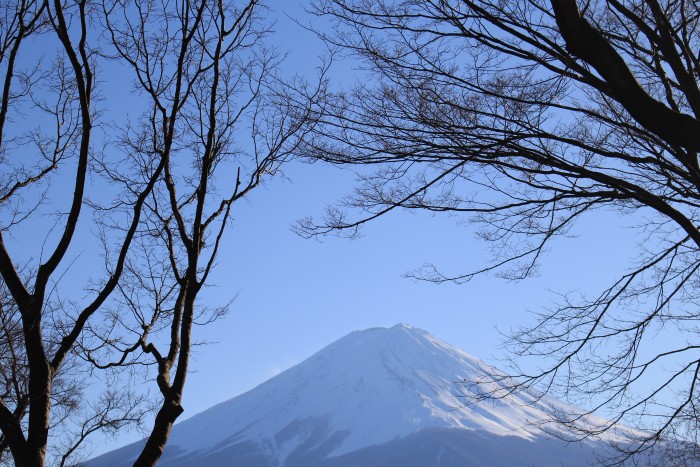 With clear weather predicted on my 2nd full day in Japan, I decided that it would be the perfect time to take a day trip to Mt. Fuji, which dominates the skyline to the southwest of Tokyo, & Kawaguchiko.

How to get to Kawaguchiko & Mt. Fuji from Tokyo

While the mountain seems so close that you can almost touch it, in reality it’s about 2.5 hours away by train. Still, the journey can be easily done as a day trip. There are several options for going to the mountain, but I chose to head to the Fuji Five Lakes region, just north of Mt. Fuji. The lakes are part of Fuji-Hakone-Izu National Park, which encompasses much of the region around the volcano. Fujisan is a UNESCO World Heritage Site thanks to its designation as a sacred place and source of artistic inspiration.

I needed to take 2 trains to get to my final destination, Kawaguchiko. The first train, the Chuo Line, was valid as part of my JR Japan Rail Pass. I then transferred to a different train at Otsuki. The pass was not valid on the 2nd part of my journey, since the Fujikyu Railway Line is run by a separate company. The staff at Otsuki were very helpful, ensuring that everyone had the correct tickets for the transfer. Interestingly, a 2 day unlimited tourist pass (2250 yen) was actually cheaper than a regular ticket. If I’d had more time in Japan, it would have been a nice area to spend a couple of days hopping around.

In classic Japanese fashion, the Fujikyu trains had cute little anthropomorphized Mt. Fuji cartoons on them. 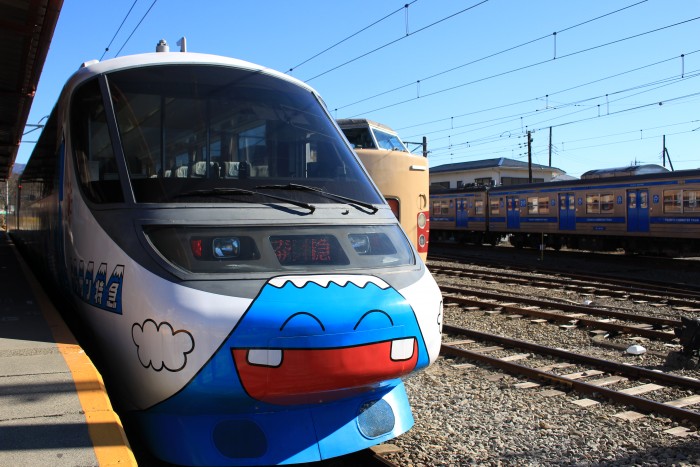 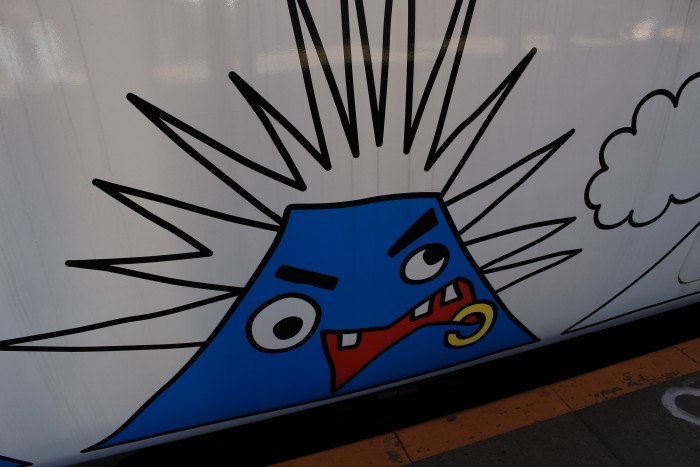 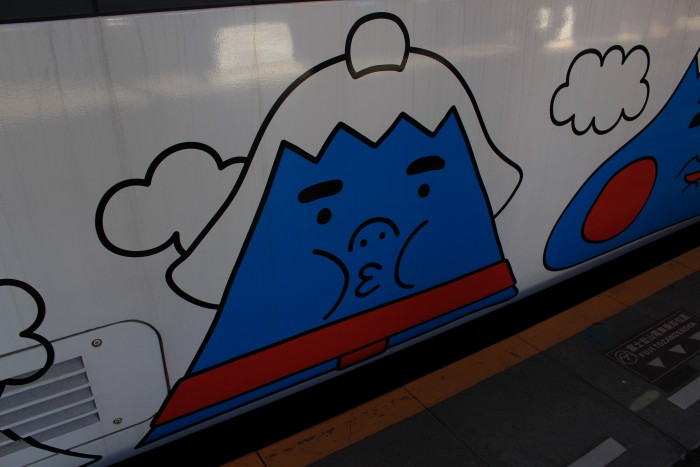 Kawaguchiko is a small town, a good contrast to the hustle and bustle of Tokyo, which I had just left the sprawling edges of only an hour or two before. Mt. Fuji fills the sky toward the south of the town. It’s a remarkable sight, especially on a cloudless day. 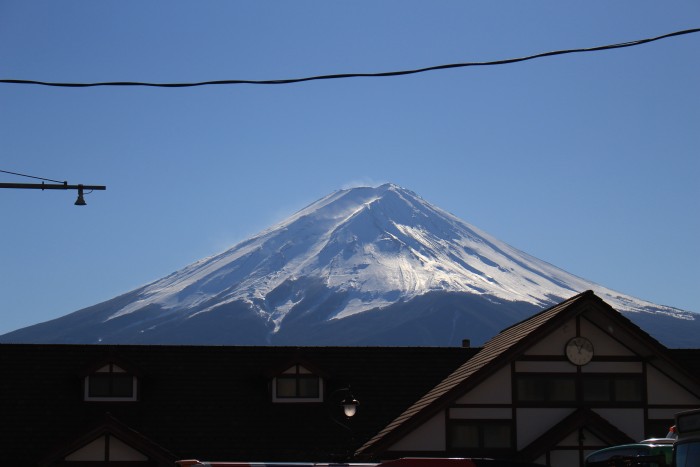 With it being winter, this would be as close as I would get to Mt. Fuji. While I would have been able to venture somewhat closer if I’d by car or bus, it would have taken most of the day, plus I would have just wanted to get an even better look until I found myself at the summit. This of course, is impossible without special equipment when the upper reaches of the mountain are covered in ice and snow.

Riding a boat on Lake Kawaguchi

I walked north through the town toward Lake Kawaguchi. I opted to take a short boat cruise around the lake, since it was a beautiful, albeit cold day, and I wanted to see the view of the mountain over the lake. 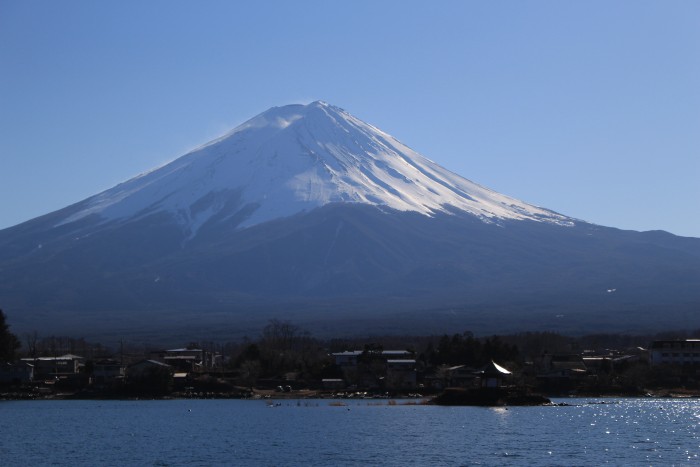 The Lake Kawaguchi Pleasure Boat is a short ride of about 20 minutes, but it’s a nice way to get out on the water for a bit. Dress warmly in winter, since the cold is magnified by the winds across the water. Combination tickets that include other area attractions such as the Mt. Kachikachi Ropeway are available for sale. 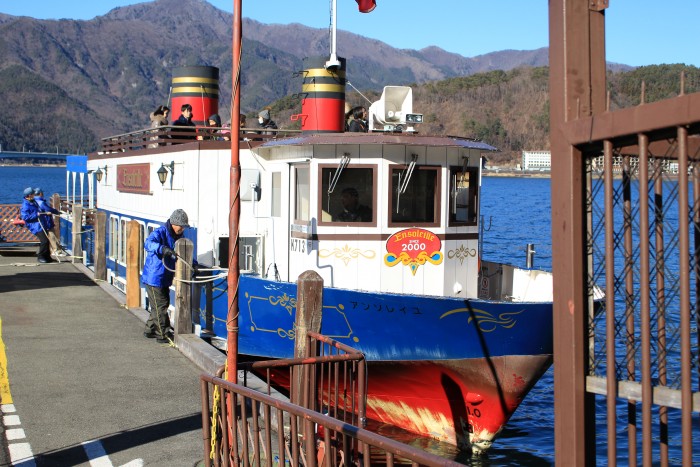 Although I had bought the combo ticket, I decided that I would wait until later in the day to take the cable car to the top of Mt. Kachikachi, as the sun was right above Mt. Fuji in the early afternoon. Instead, I walked around the south side of Lake Kawaguchi.

On the south shore of the lake sits a unique museum called Kawaguchiko Kitihara Museum Happy Days. Contrary to your first reaction, it is NOT a museum dedicated to the classic TV show, though it being Japan, I would not have been surprised to learn that was actually true. The Kitahara Happy Days Museum is dedicated to preserving the pop culture of 50s, 60s, and 70s. The museum was created by a man named Teruhisa Kitahara. Over the last 40 years, Kitahara has amassed an incredible collection of tin toys, games, records, advertisements and many more cherished items relating to the era of his childhood. It’s an endearing monument to that particular time period, and while it was all from a bit before my time, I still understood the love that has gone into the museum. The collection doesn’t just cover Japanese pop culture; American & British pop culture also factor heavily. I went in expecting that it would be a quick visit, but I spent at least an hour there exploring while listening to music from The Beatles, which is piped through the rooms.

Here are a few of my favorite exhibits from the museum: 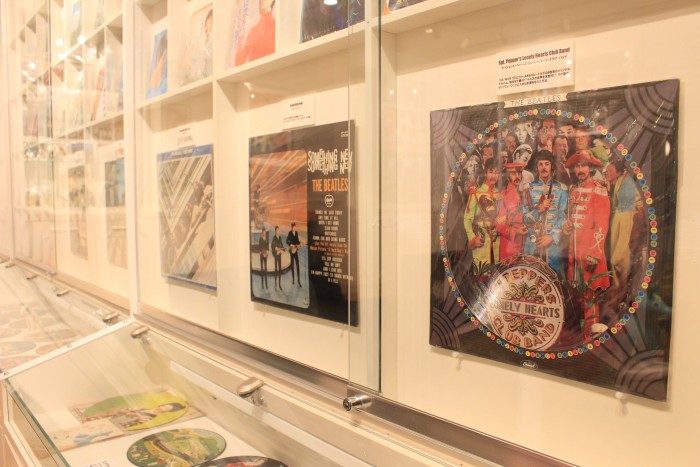 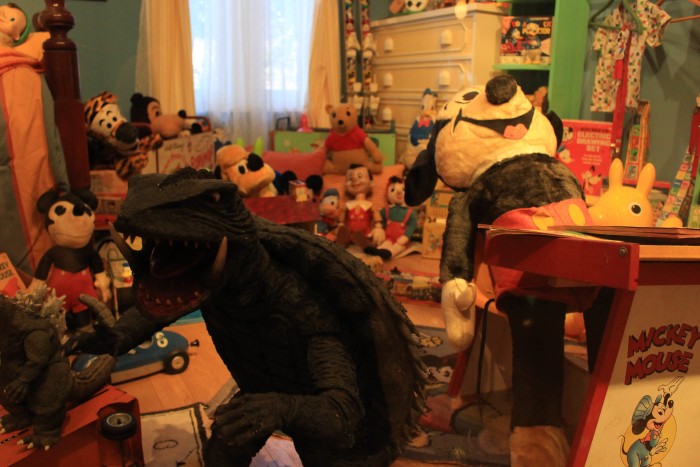 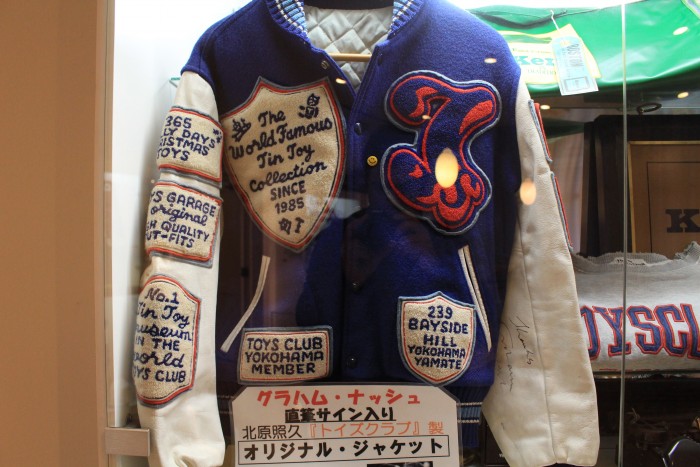 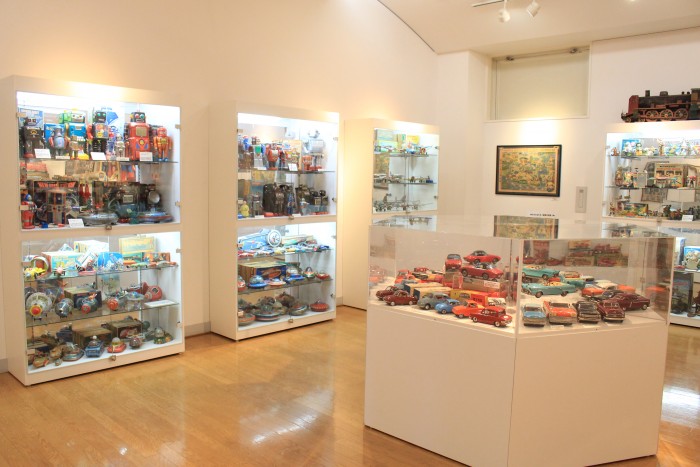 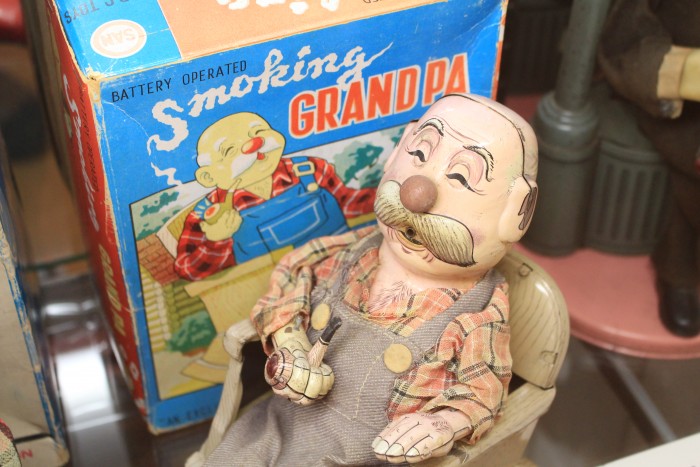 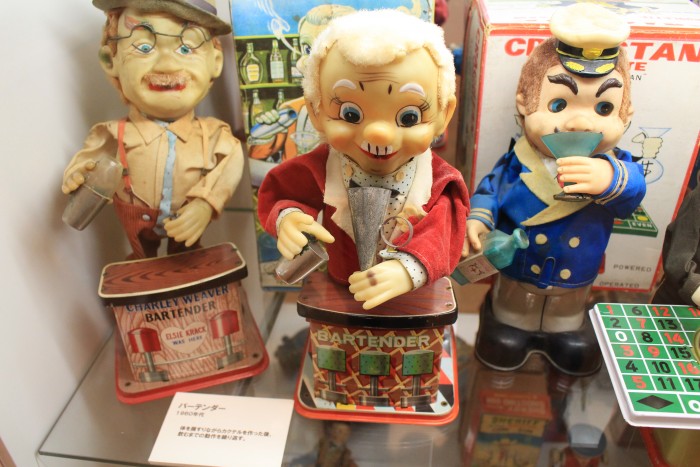 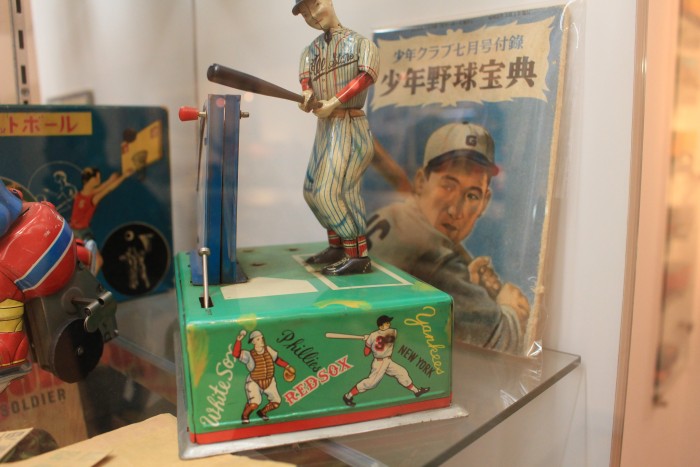 It’s impossible to leave the Kitahara Happy Days Museum without a smile on your face. You can even purchase unique toys in the gift shop so you can start your own collection. 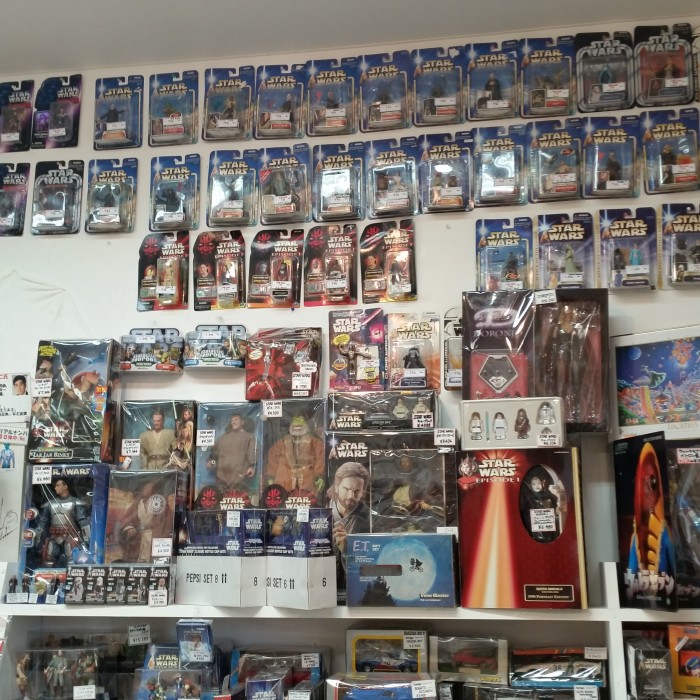 After visiting the museum, it was time to head back to the Mt. Kachi Kachi Ropeway, so I could see the lake & Mt. Fuji before the sunset.

I arrived at the cable cars just after a large group had arrived, so the line was a bit long. It moved quickly, and there was plenty of room at the summit of Mt. Tenjo. There are several photo viewpoints, including viewing platforms, as well as snack bars and a couple of shrines. The view across Kawaguchiko is phenomenal. 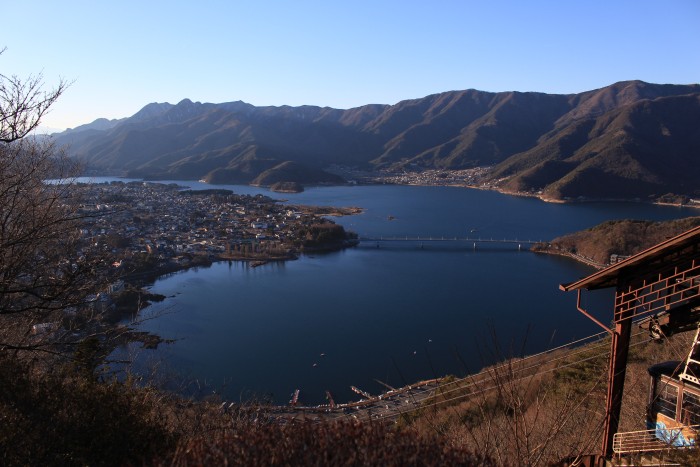 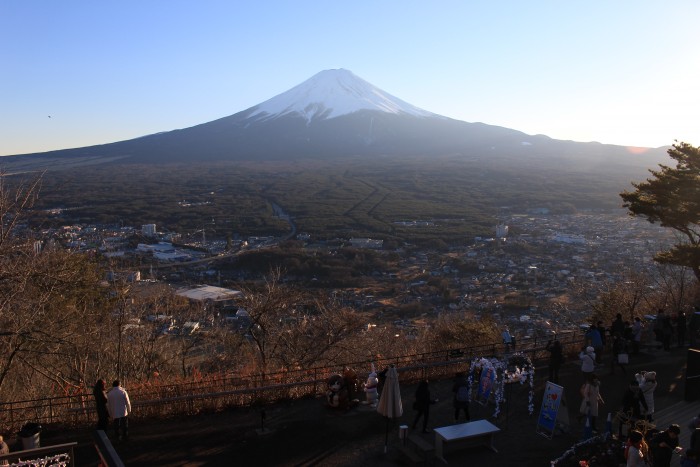 You may have noticed that I first referred to this as Mt. Kachi Kachi, then as Mt. Tenjo. I’ll let Japan-Guide.com explain:

Mount Tenjo is the setting of Dazai Osamu’s folk story “Kachi Kachi Yama”, for which the ropeway is named, in which a rabbit gets revenge on a thieving tanuki (Japanese raccoon) by setting him on fire and drowning him in a river. Cute cartoon characters of the animals decorate the ropeway cars and observation point and are surprisingly kid friendly considering their gruesome background. 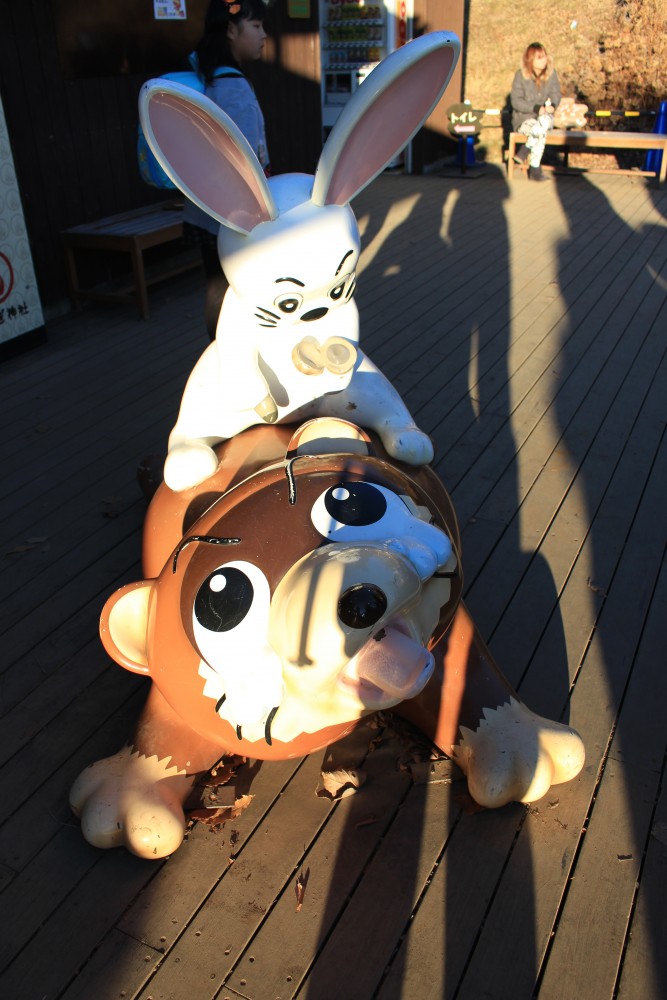 I had noticed these cute cartoon characters, but I figured they were just decorative, much like they had been everywhere else in Japan. Now that I know the true story, I wonder what other sinister pasts cute Japanese cartoons are hiding.

After spending a bit relaxing at the top of Mt. Drowned Raccoon, I took the cable car back down to Lake Kawaguchiko, then walked back to the train station. With it being winter, the sun was rapidly setting. The journey back to Tokyo was the same as the journey there, except in darkness. The 2nd train was also completely full, resulting in me having to stand most of the way back to Shinjuku.

Meeting with a friend in Piss Alley in Tokyo

My day wasn’t yet over. A long time ago, I studied for my Masters degree in Scotland, in a program filled with students from around the world. One friend from the program, Hiromi, is from Japan and lives in Tokyo, so we met up for some drinks & food in Shinjuku after I returned from my day trip to Mt. Fuji and Kawaguchiko.

As friendly as Japan is to English-speakers, it was still nice to have a translator for the evening. We first headed to Shinjuku’s Omoide Yokocho AKA Memory Lane AKA Piss Alley. Some of the spots in Omoide Yokocho aren’t overtly welcoming to those who don’t speak the language, as the picture menus that are common elsewhere in Japan are nowhere to be found. Those spots are places more for locals or for the more adventurous, who don’t mind either ordering blindly or looking at what others are eating and requesting the same if it looks good.

While there are many interesting places to eat in Omoide Yokocho, it is famous for its tiny yakitori spots. They are barely even restaurants, as they typically only have a small counter downstairs where the meat is grilled, and a few tables up a steep staircase. It’s street food in a building the size of a trailer. We had several freshly grilled sticks of meat at a place called Hinadori, some with sauce and some simply salted. 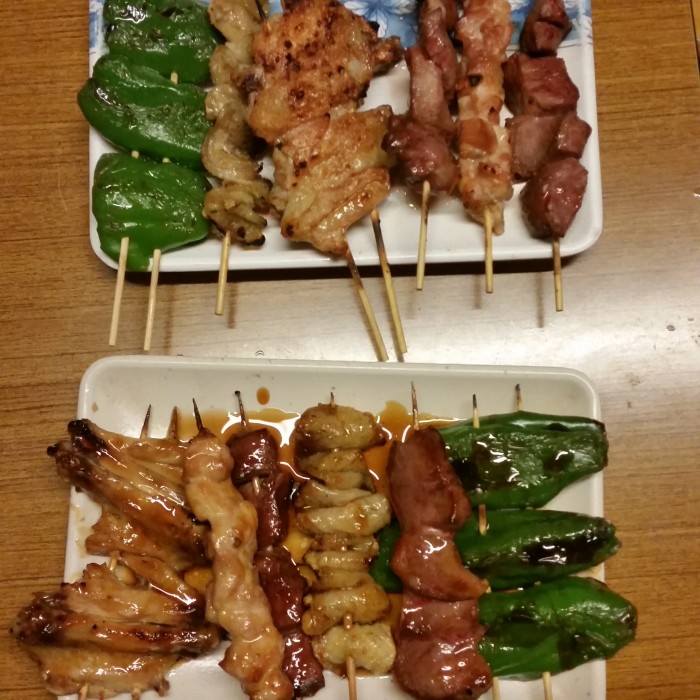 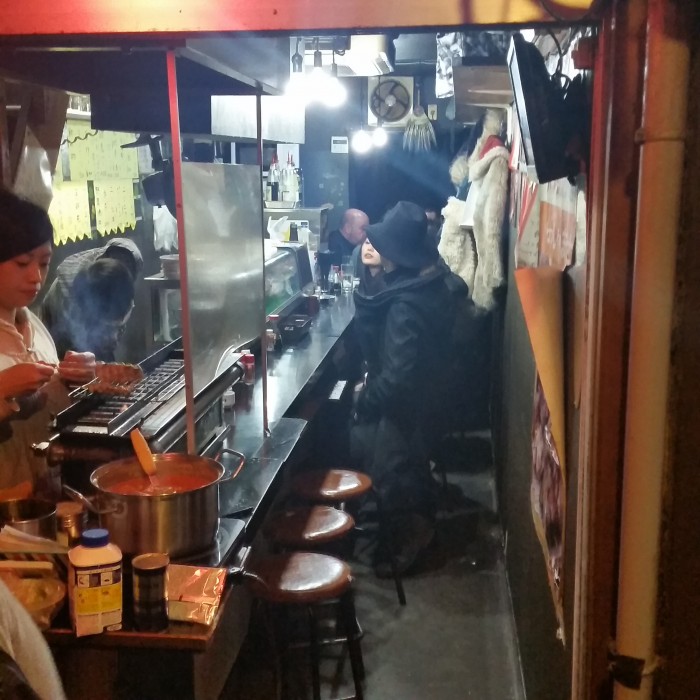 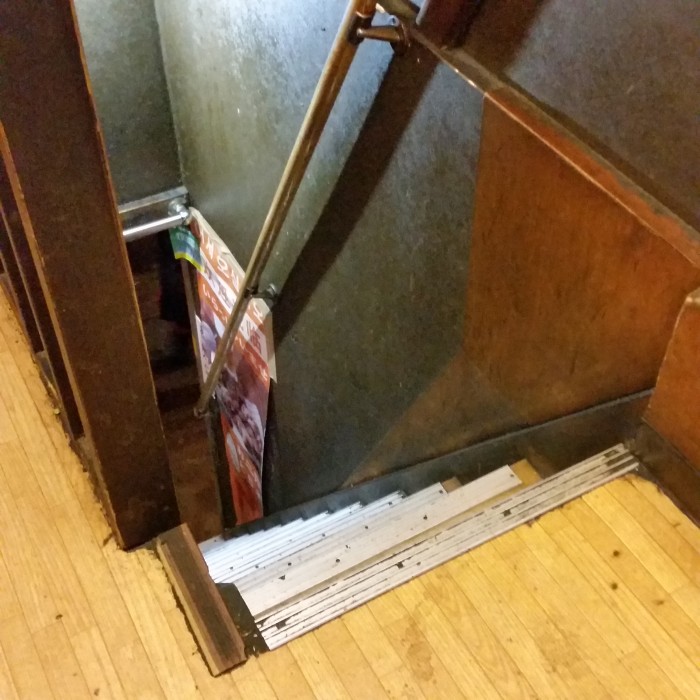 After our initial yakitori snack, Hiromi showed me around more of Shinjuku. Between the narrow streets, the lights, and the smells of all of the food, Shinjuku is complete sensory overload. It’s areas like this that give Tokyo its reputation as a city that is filled with unique energy. Everything is so densely packed in the Shinjuku alleys that it’s warm on even the coldest nights. That didn’t stop us from having a nice hot bowl of ramen to close out the evening.

A day trip to Mt. Fuji & Kawaguchiko is a great way to escape the hustle and bustle of Tokyo. If you’re looking for a break from the city, there’s no better way to get out and enjoy some fresh mountain air in the Fuji Five Lakes region.