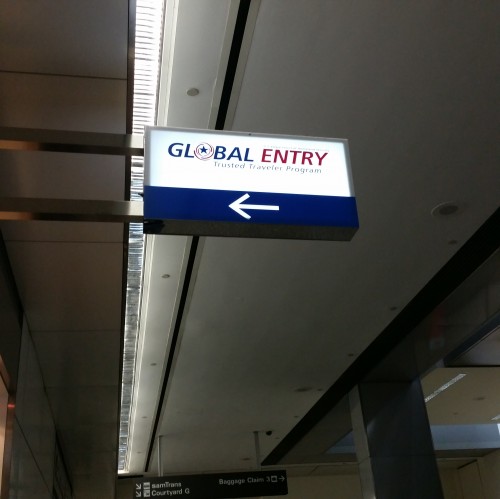 For those who are unfamiliar, Global Entry is a U.S. Customs and Border Protection program that allows travelers faster entry to the country. Approved travelers can use automated kiosks to bypass the long lines at immigration control. In order to be approved for the Global Entry program, travelers must pass a background check and be deemed low-risk. For the full details, go here.

CBP outlines the full benefits of the program:

That last bullet point is key. With TSA Precheck no longer being offered as frequently to passengers who are not members of the program, the TSA is steering people toward applying. If you want to be able to travel without removing your shoes, laptops, liquids bags, and jackets, you can either apply for TSA Precheck for $85, or Global Entry for $100. Both are good for 5 years. For an extra $15 ($3 per year), choosing Global Entry over TSA Precheck by itself is a no-brainer.

I applied for Global Entry about 2.5 weeks before I left on my trip around the world. Since the program requires an in-person interview before approval, I was worried that I wouldn’t be able to complete it before departing. As luck would have it, there were appointments available at SFO starting the day before I left. I realized that since I was going to be at the airport anyway, I might as well just get there early and do the Global Entry interview on the day of my departure.

I won’t go step-by-step through the initial application process, but suffice to say it’s pretty straightforward. It’s not all that different from applying for a credit card, though you do get asked more questions about your employment & residence history.

Upon arriving at SFO’s International Terminal, I headed down the escalator near the entrance. The Global Entry interview office is on the same level as baggage claim. I was about 45 minutes early, so I sat in the small waiting area outside for a bit. If you find yourself there early, it doesn’t hurt to check in just so they know you’re there. I ended up going through the interview well before my scheduled time. It seemed like the scheduling was a combination of the allotted times and first-come, first-served if they have the time. You never know if someone’s not going to show up, so you might be done early like I was.

The interview process was easy. I wasn’t sure what to expect, but for the most part it was just reaffirming questions I had answered on the initial application, and presumably also things that were in the background check. I had my photo taken, provided my fingerprints, and in 10 minutes or so I was done. I was told my Global Entry card would be sent to me in a couple of weeks, but I still had my known traveler number right away, so I could apply it to my travel itinerary. I didn’t try using it when I checked in for my flight that day, as I had so much time to kill in the airport anyway.

My return to the United States in Los Angeles was my first opportunity to use Global Entry. I had been approved 3.5 weeks earlier, so I didn’t think there would be any issues, but never having used it before, I wasn’t sure. It was incredibly simple. Being one of the first people off the plane from first class certainly helped me beat any lines, but even then, there was no wait behind people who had arrived just before me on other flights. I walked right up, scanned my passport, scanned my fingerprints, answered a few questions on the touchscreen, and that was it. I was given a receipt with my photo and information, which I then handed to a CBP official. Total time was less than a minute.

Admittedly, I was skeptical about all of this when I first heard about the known traveler programs. The stubborn side of me hates the idea of having to spend money to make the security screening process be similar to what it used to be before the TSA spent ridiculous amounts of money on useless technology & made knee jerk reactions to specific, one-off events. Once it was clear that the known traveler programs were not going away, I caved. To be honest, I’ve had a great experience with it so far. TSA PreCheck is a breeze, and while I have only re-entered the United States once since I got Global Entry, I managed to get off a plane, get through immigration control and customs, and switch terminals at LAX in about 15 minutes. If you’re a frequent traveler (and of course, have nothing in your life that is going to keep you from being approved), Global Entry is worth the money.