It’s impossible to see Monte Urgull towering above San Sebastián & not think that it would be an amazing place to get a great view of the city & the surrounding coast. For centuries, this mountain was used for defensive fortifications thanks to these views, but nowadays the only shooting is done with cameras. Thanks to being so close to Parte Vieja, Monte Urgull is a nice place for hiking off those calories from eating so many great meals & pintxos while you’re in San Sebastián.

What to see & do on Monte Urgull

There are several hiking paths on Monte Urgull. For the best views, you can go all the way to the summit, which is 123m above the sea. However, if you have less time, you can still just go part way up & see of various parts of San Sebastián from above. Or for coastal views & crashing waves, follow Pasealeku Berria (El Paseo Nuevo), which circles the back side of the mountain.

There are a few ways to access Monte Urgull. From the southwest, paths wind their way up the mountain from Basílica de Santa María del Coro or the San Sebastián Aquarium, while from the southeast, there are staircases near the San Telmo Museum. After several rainy winter days, I finally got a clear afternoon on my final day in San Sebastián. I first started near San Telmo, then looped around the back of Monte Urgull before heading up to the summit.

In addition to the amazing views, here are the other highlights of Monte Urgull. 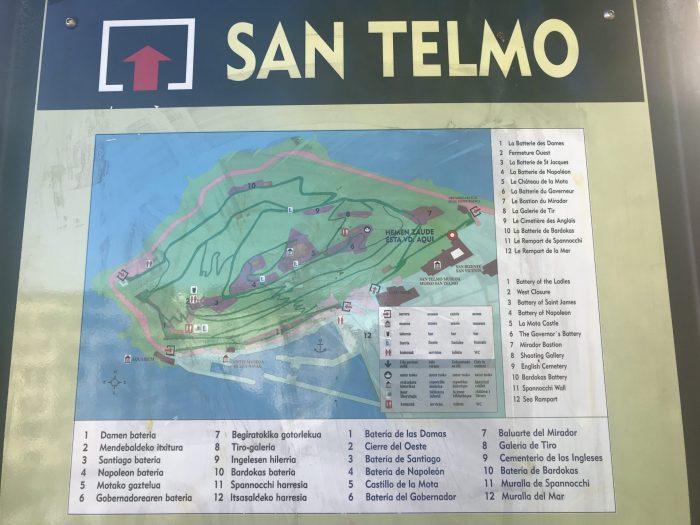 La Mota Castle is at the top of Monte Urgull. Built in the 12th century, it is part of the fortifications that can be found spread out across most of the mountain. While many sections of the fortress’ walls were destroyed, there are several batteries & overlooks that still remain. 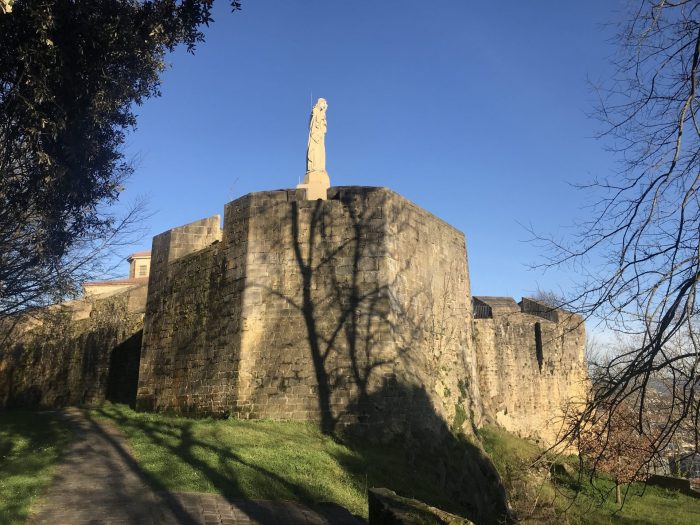 The viewing platform at La Mota Castle is one of the best on Monte Urgull, as it looks straight down onto the San Sebastián Old Town. 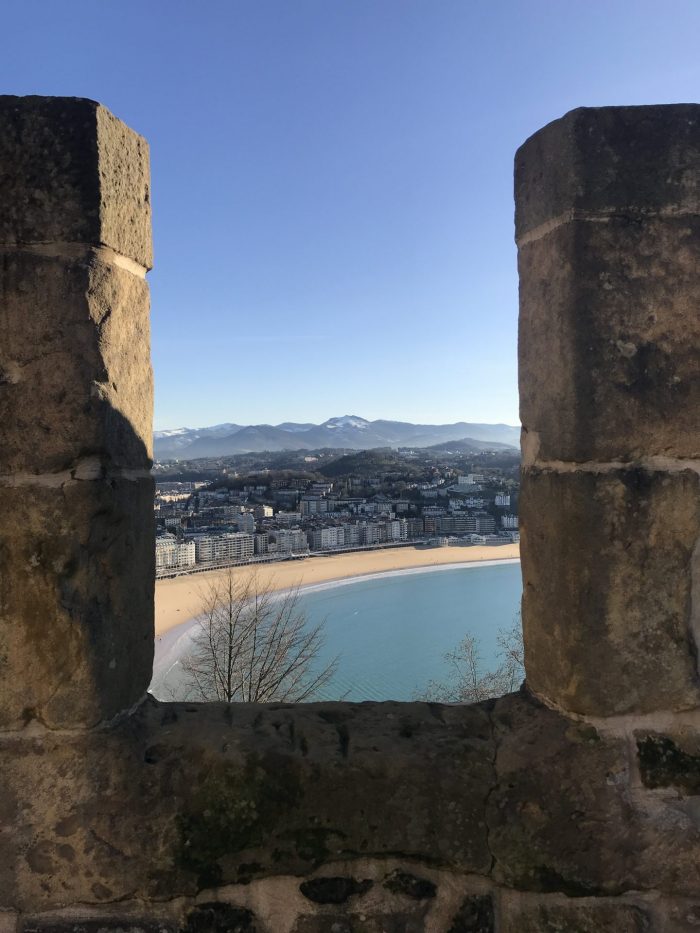 The cannons show how this defensive position would be beneficial during an attack. San Sebastián was attacked several times during the 18th & 19th centuries, with the city being burned to the ground in 1813. 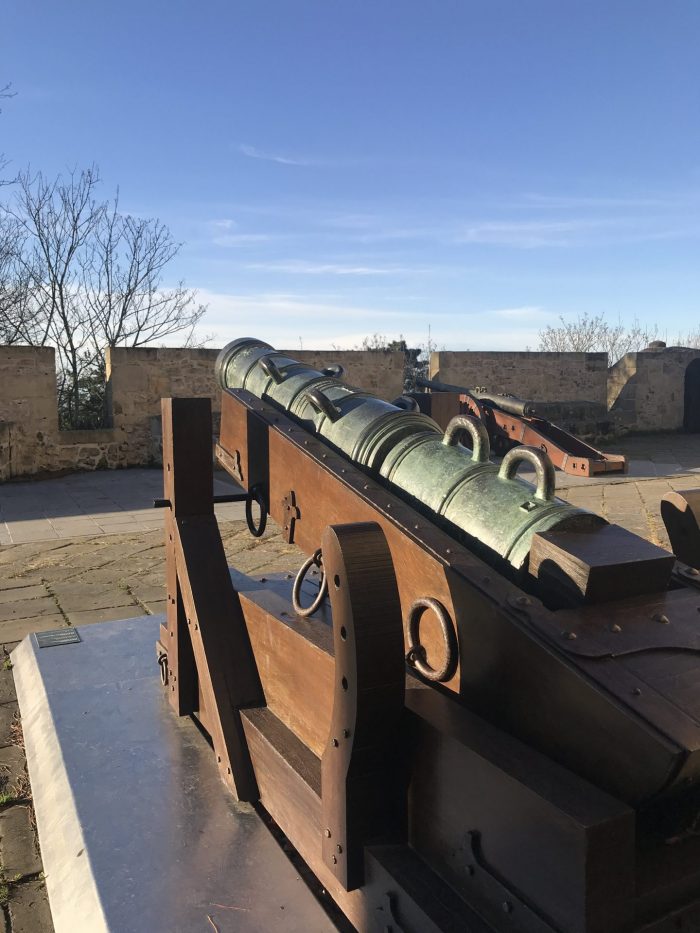 Towering above is the Estatua del Sagrado Corazón de Jesús (Sacred Heart of Jesus statue), which was built in 1950. The statue is 12 meters tall, but it sits on a pedestal & chapel an additional 15 meters above the courtyard. 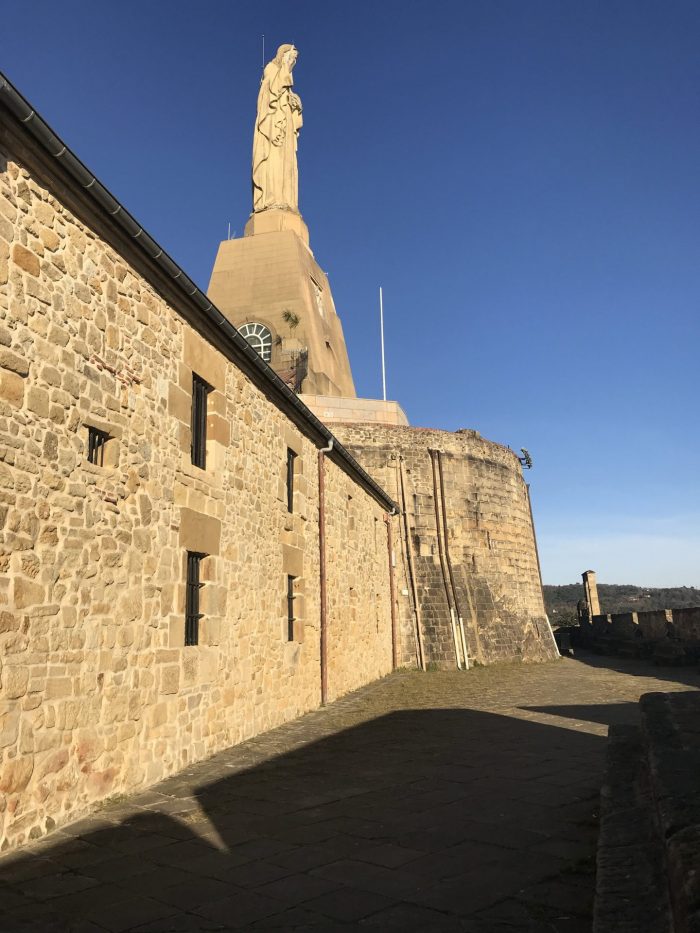 La Mota Castle is home to a history museum, but it’s only open during the summer months. Otherwise, only the outside areas are open to the public.

Just behind La Mota Castle is the Napoleon Battery, which is near the highest point of Monte Urgull.

Just to the east of La Mota Castle is the Governor’s Battery. This battery is one of the largest & most intact of the batteries on Monte Urgull. From this position, it’s possible to get panoramic views around all of Old Town & the rest of San Sebastián. 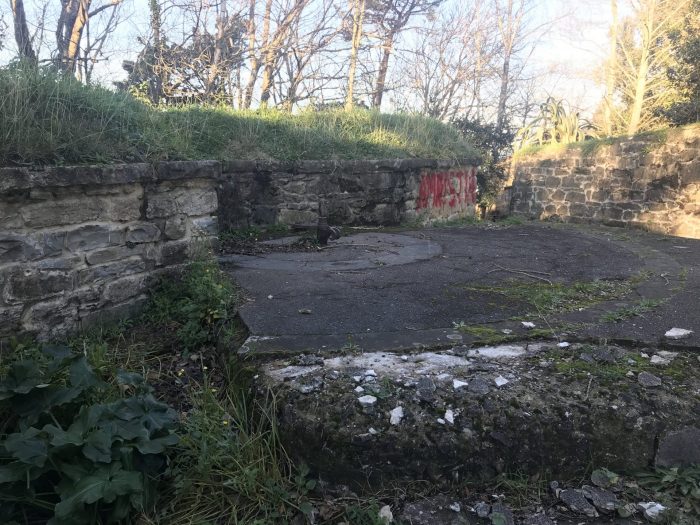 Santiago Bateria is another spot with some of Monte Urgull’s best views. It has fewer trees blocking the view compared to spots just below it, and it’s particularly nice for seeing all of La Concha Bay & the San Sebastián promenade. 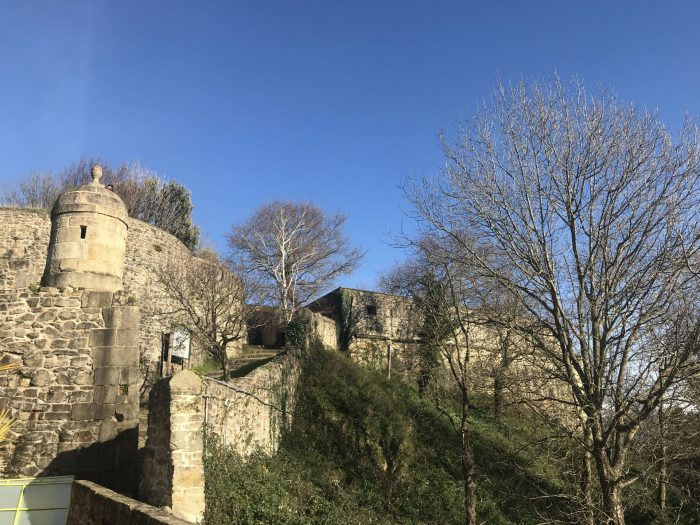 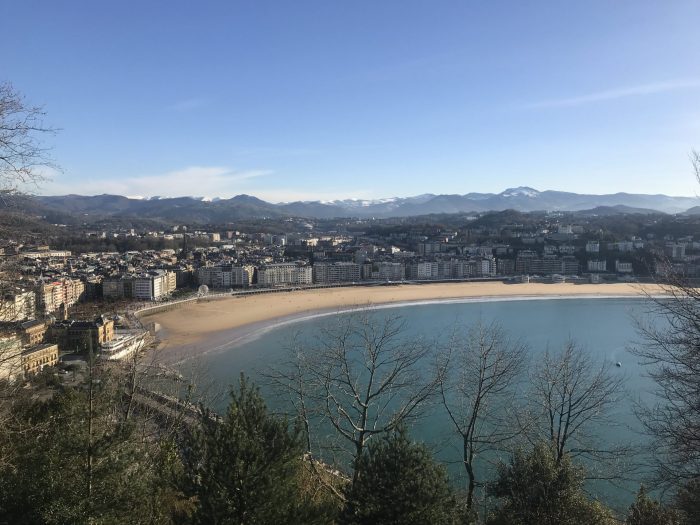 The West Closure is just below Santiago Bateria. While it does have some views, the best ones are both above it and below it due to the trees. 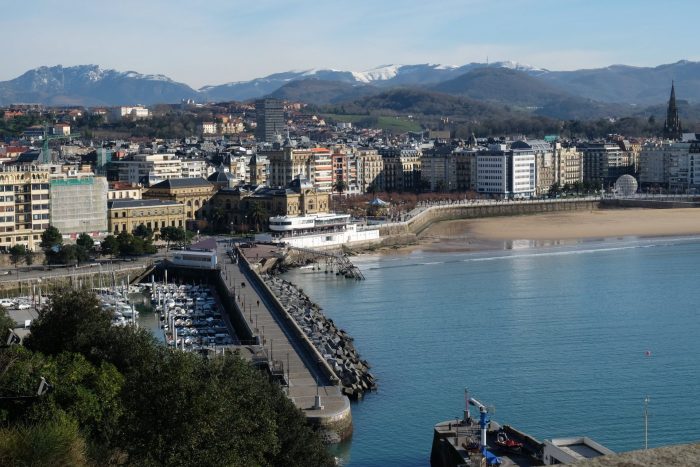 Urgull Mendiko Bista is lower on Monte Urgull, but it’s a good option for anyone who doesn’t want to climb a whole mountain. This was actually one of my favorite overlooks on my hike, as it had great views of the bay, Santa Clara Island, & Monte Igueldo. 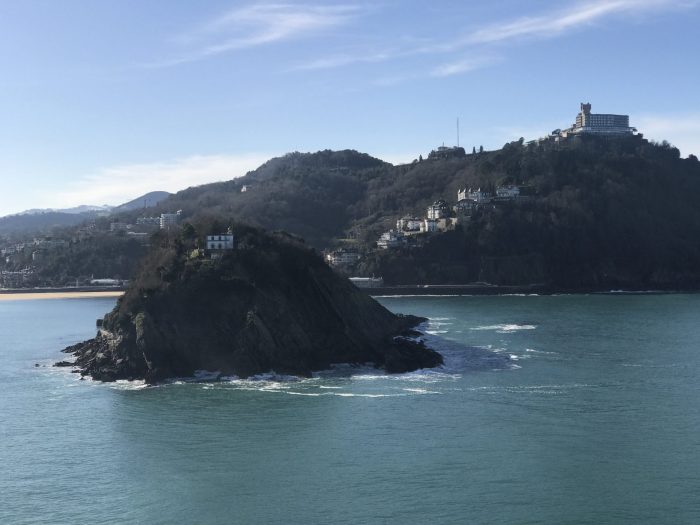 What the West Closure does have going for it is a bar with beer and snacks.

The cannon-lined Ladies Battery is another great overlook for panoramic vistas of the harbor. It received its name due to a fountain in the lower bastion that local women would visit to get water. 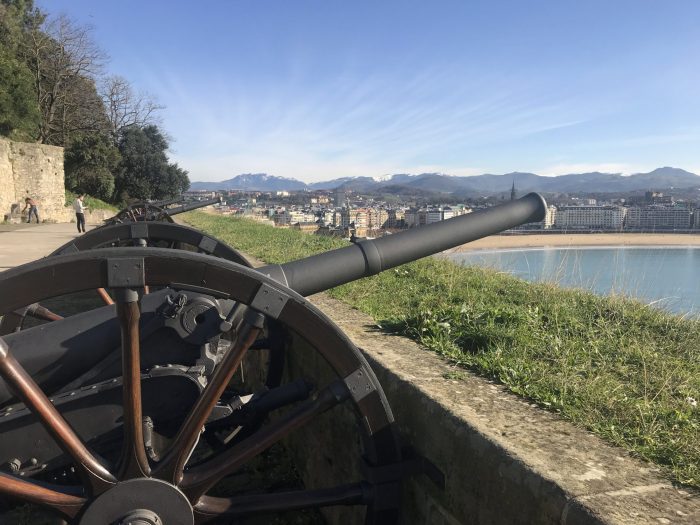 Go there for sunrises & sunsets when you don’t want to go all the way up. It’s just above the aquarium & the naval museum, so it’s the most easily accessed battery & mirador from the Old Town.

Mirador Bastion is another large, well-preserved section of the fortress. Due to its location on the eastern side of Monte Urgull, it has the best views of Gros & the mountains beyond. 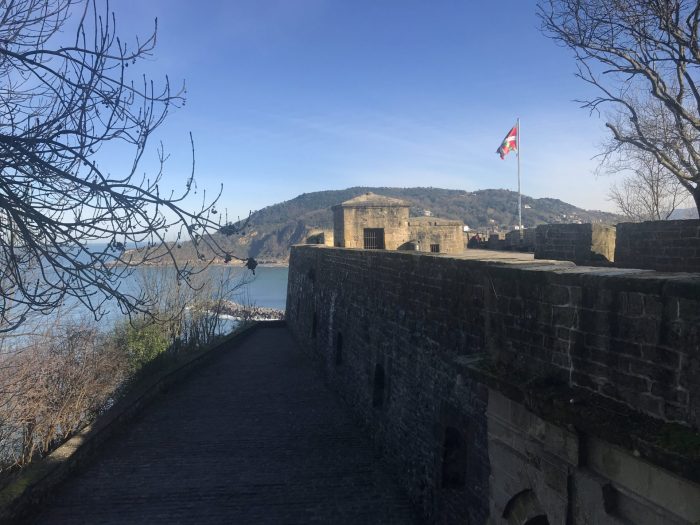 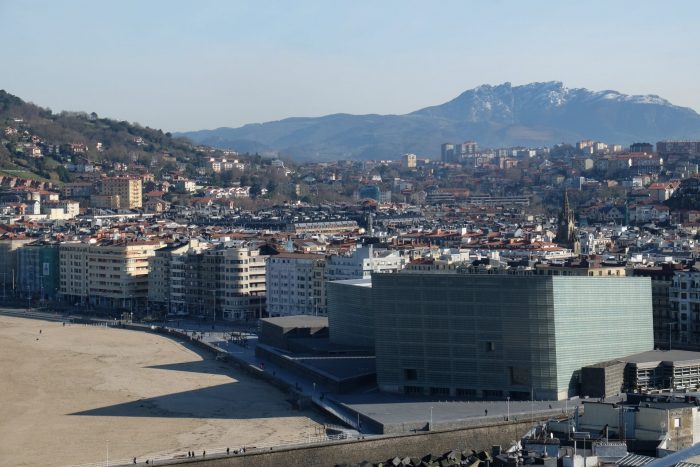 At first, the English Cemetery doesn’t look like much more than a few monuments. 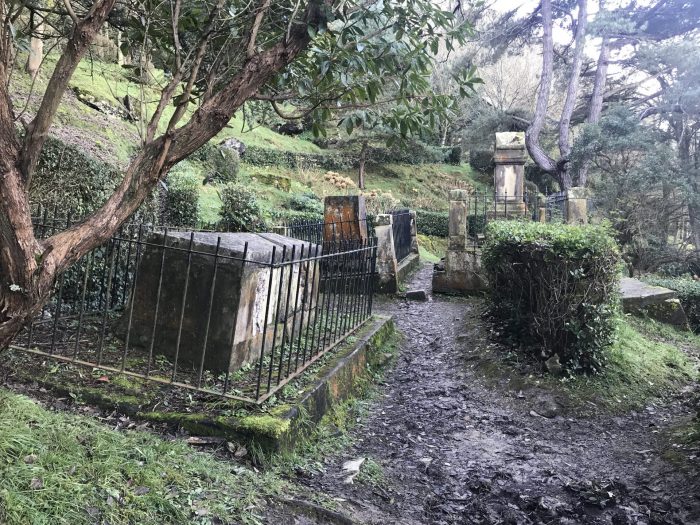 But go into the hills to find some interesting cliffs and rock formations, all in one of the quieter areas of the mountain. 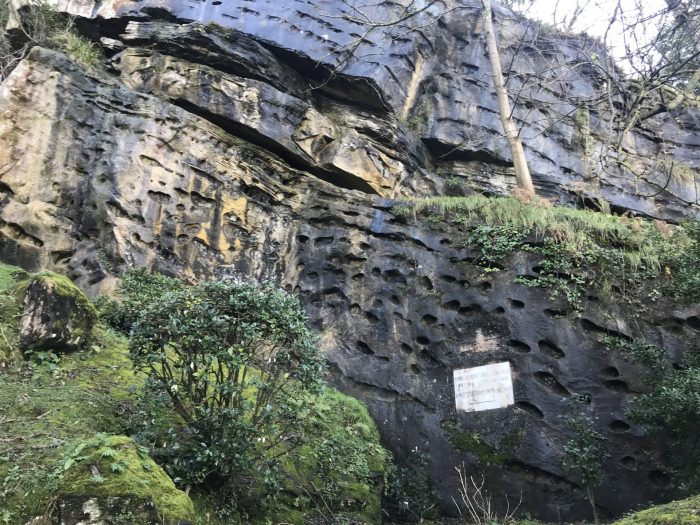 Bardocas Battery overlooks the northern coast, out toward the Atlantic Ocean. You can head higher for even better views, but this north side of Monte Urgull is peaceful. 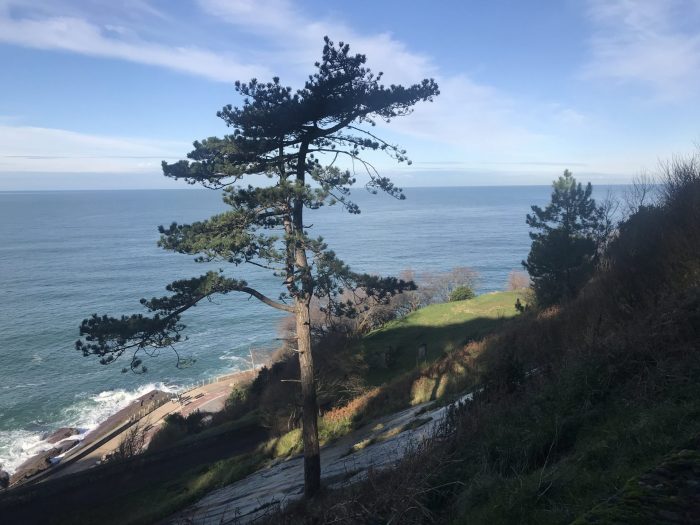 After a couple of hours of hiking on Monte Urgull, you might be tempted to do even more walking in San Sebastián. The walk along the San Sebastián promenade is completely flat, and features several sculptures from native son Eduardo Chillida.