San Sebastián was named European Capital of Culture in 2016 thanks to a wide variety of cultural highlights, including arts, music & film. Then of course there is the city’s position at the forefront of the Basque culinary world that has influence far beyond the region. While Donostia-San Sebastián might be best known for its legendary pintxos bars & txakoli drinking culture, there are also some quality spots for craft beer that are especially welcoming. Here are the best places to drink craft beer in San Sebastián, including beer bars, breweries, tap rooms, & bottle shops.

Etxeberria had been on my list of San Sebastián beer bars I wanted to visit, but recommendations from people I’d met in a beer bar in Bilbao pinned it to the top. I’d been given a translated welcome note to hand to Juanjo, the big bearded proprietor of the bar. But even if I hadn’t, I would have felt at home in Etxeberria.

Located in San Sebastián Parte Vieja (Old Town), Etxeberria is a small bar, made even tinier by the sheer volume of everything packed inside. While some beer bars opt for clean, modern looks, Etxeberria is an eclectic ode to beer history. It’s the sort of place with handwritten signs everywhere & old bottles perched on every available space. 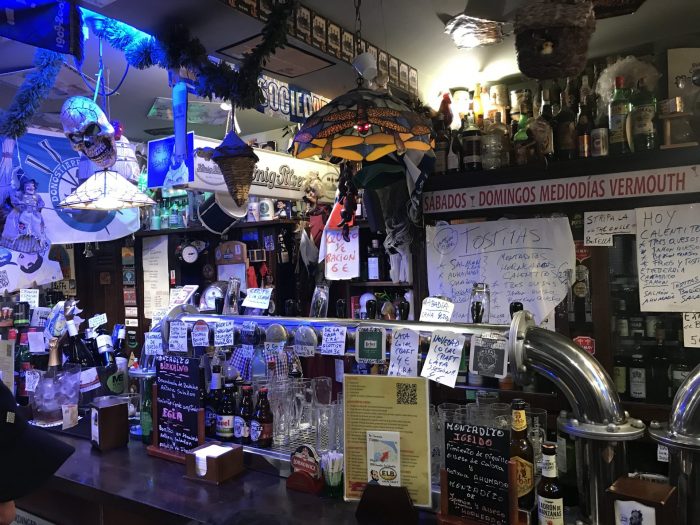 It’s a beautiful chaos that somehow manages to pack 22 taps & a similar selection of bottles inside. The beer selection leans toward Belgian & German beers, but there are beers from local Basque & Spanish breweries too. If that’s not enough to drink, they’ve also got cider, vermouth, and cocktails.

Continuing the recommendation chain that I’d started in Bilbao, Juanjo & some of the regulars in Etxeberria also volunteered their personal favorite local beer spots. Beer is best when there’s a feeling of community. If you’re looking for a great bar that welcomes everyone, look no further than Etxeberria.

Bar Desy is another San Sebastián craft beer bar that goes out of its way to provide a great experience. The father & son who run Bar Desy clearly love what they do, providing recommendations as well as more information about the beer.

The beer selection at Bar Desy might not be huge, but what it lacks in size, it more than makes up for in quality. The bottle list is well-curated, and the handful of taps include local favorites such as Gross & Basqueland. They offered to warm my first beer, Aurrera Stanitsa Russian imperial stout by Laugar Brewery, a bit to get it to the best temperature for drinking, showing they know their beer.

No bar in Donostia-San Sebastián is complete without pintxos, and Bar Desy has a nice little selection. I had albondigas (meatballs) and torreznos (fried bacon), but the bocaditos (small sandwiches) also looked delicious. 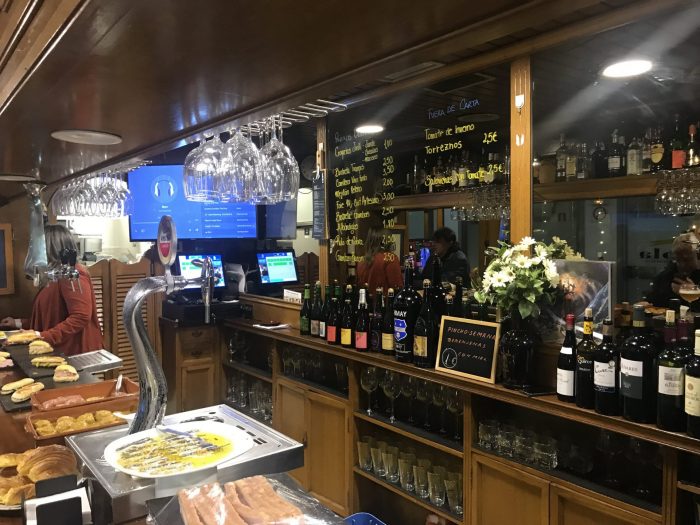 While sitting at the small inside bar with my meaty pintxos & imperial stout, I chatted more with the owners. They mentioned that one of their beers on tap, Yes Wheat Can by Kraftank Barcelona, was a special release with proceeds going to fight cancer. It was the only keg of it in Basque Country, and it was only going to be available that day. I ended up having a couple of pints of it in order to do my charitable duty.

The guys mentioned that Gross Brewery would be holding an event that upcoming Saturday, so I was able to time my visit to catch it. It also happened that they were going to be traveling to San Francisco in the near future, so I recommended plenty of my favorite SF beer places for them to check out.

If this all wasn’t enough to win a place in my heart, the music was also a great contributor to the atmosphere, with funk, dance, 80s, disco, & mashups adding to the fun.

Pub Drop has a large front patio with views of the cathedral in San Sebastián. About half of their 19 taps are local, with the rest being from around Europe. They also have a selection of bottles & cans including well-known breweries such as Stone, Mikkeller, Evil Twin, Oskar Blues, and Beavertown.

An underground dive rock bar with craft beer? Count me in.

The selection at Akerbeltz isn’t large – just a couple of taps and then a dozen or more cans & bottles, but what they do have is a nice selection. It’s cozy inside, so cozy that the beer list is written on angled part of the ceiling. 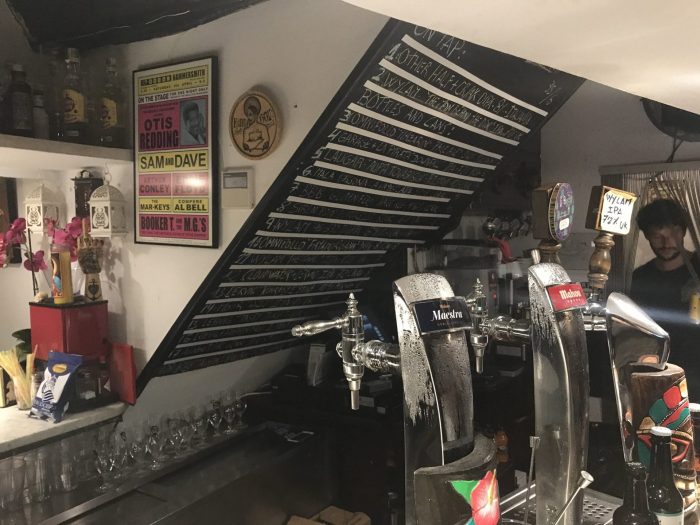 For more space, the fun spills out onto the plaza overlooking the San Sebastián waterfront, just beneath Monte Urgull.

Garua is a small corner bar in San Sebastián’s Old Town with 7 taps & a focus on burgers. In addition to the upstairs space, there’s more room down in the basement. 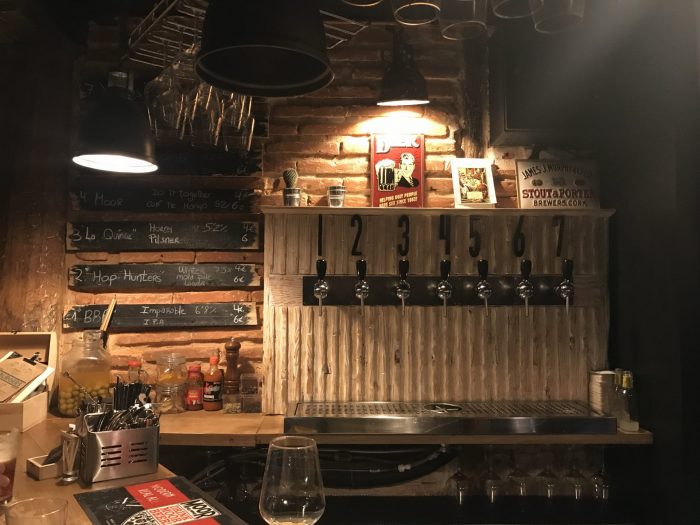 Arraun may primarily be a chill cocktail bar (and an excellent one at that), but they also have a few craft taps and a couple of dozen bottles, about half of which are from Spanish craft breweries.

Geralds Bar mostly focuses on wines & pintxos, but they also have a selection of local craft beer. Their original location is in Melbourne, Australia, but owner Gerald Diffey loved San Sebastián so much that he chose the city as his second bar location. I can’t blame him.

The best taprooms in San Sebastián

Mala Gissona Beer House is the San Sebastián taproom for the local Mala Gissona Brewery. About half of the bar’s 12 taps feature their own beer, with the other half, plus a huge bottle & can list, covering the rest of the world while not neglecting any of the other local Basque breweries. 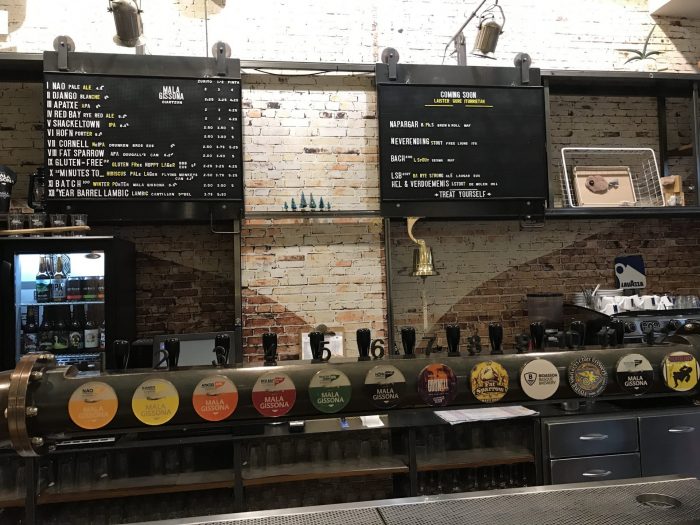 Their food selection features wings & burgers, while the music leans towards rock & punk such as The Smiths & The Ramones.

Thanks to being in San Sebastián’s eastern Gros neighborhood there’s a bit more space, which Mala Gissona Beer House takes full advantage of by having a large patio that offers summer sunshine & winter fireplaces.

Basqueland Izakaia is the San Sebastián bar for one of the best-known craft breweries in Spain, Basqueland Brewing Company (more details below). In addition to their craft beer, the restaurant also serves ramen, izakaya, buns, and more.

GROSS Brewery & Taproom is located a bit outside of the San Sebastián city centre. However, it’s accessible by buses that run to Igara, including the 33. On a quiet Saturday night, the bus took about 20 minutes.

Being further away from the city gives GROSS Brewery & Taproom way more space than you’ll find at most local bars. In addition to their full brewery, you’ll also find a spacious taproom adorned with their slogans “No hops, no hope” & “More hops, less cops.”  There’s also a patio & arcade games. 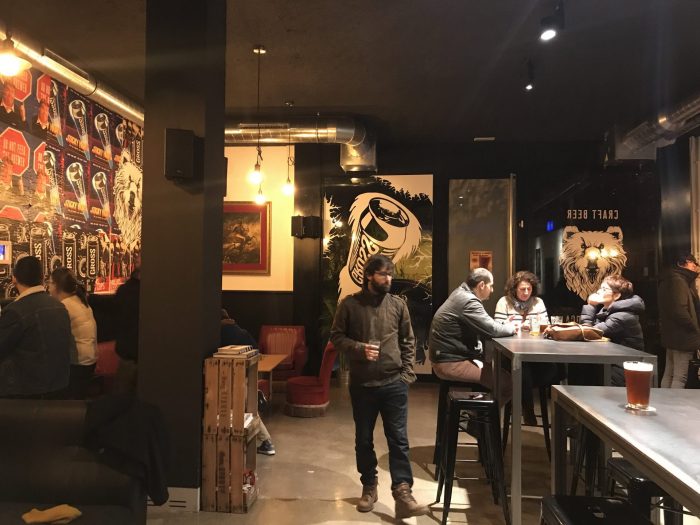 GROSS Brewery features 6 taps of their own beer plus nachos and other snacks, including free cheese puffs.

The brewery sometimes hosts live music performances, but the rest of the time there’s great 60s, 70s, & 80s rock playing on the stereo.

Basqueland Brewing Company was founded by three Americans in 2015. The goal of Basqueland is to produce beer that is on par with the Basque culinary experience. That’s a lofty goal, to be sure, but their quality, award-winning beers have rapidly become known across Spain. In addition to the aforementioned taproom in San Sebastián, their main brewery in Hernani, just south of the city, has 6 taps plus bottles & cans.

KAÑABIKAÑA Craft Beer Shop on Zurriola Beach is a fantastic place to get local beer to go. They’ve got 18 taps that can fill plastic growlers of various sizes. Additionally, they have an impressive bottle & can selection. You can also sample on site. 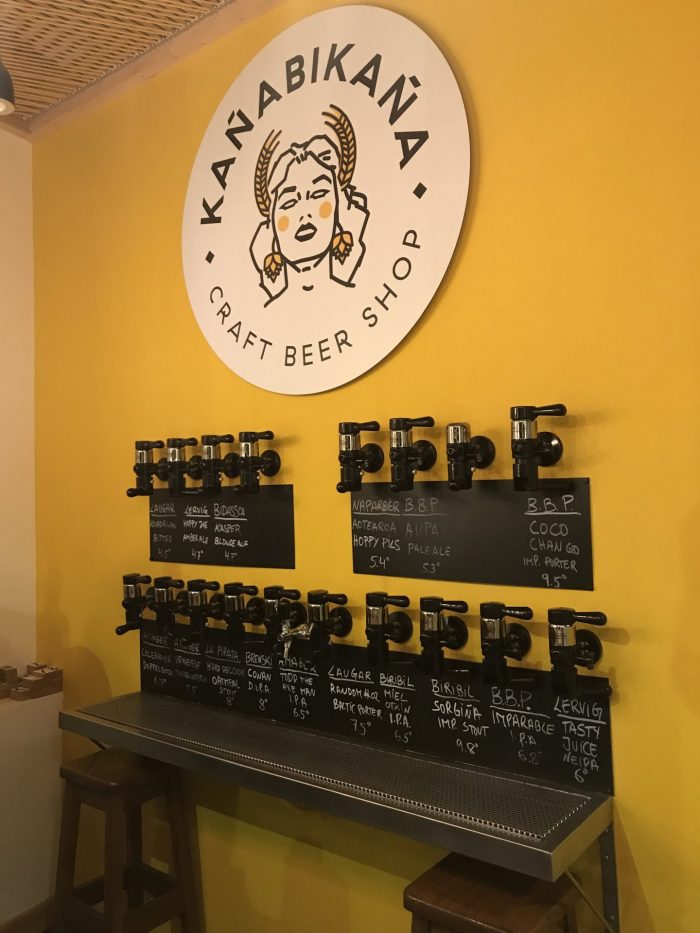 KAÑABIKAÑA is only beer bar in Donostia-San Sebastián that does any sort of growler fill like this, so it’s an excellent option for taking the freshest & best local beer to drink at home or elsewhere.

San Sebastián has a nice variety of craft beer spots, from new breweries to friendly, passionate beer bars. It’s one of the most welcoming craft beer scenes I’ve experienced.

If you’ve spotted any other great places for beer in San Sebastián, let me know in the comments!

If you’re looking for a place to crash after drinking beer in San Sebastian, check out these San Sebastian hotels & AirBnbs.