The San Telmo Museum in San Sebastián is the oldest museum in the Basque region. Inside its beautiful buildings, you’ll find a great introduction to Basque history & culture.

About the San Telmo Museum

History of the museum

The original San Telmo Museum opened in Donostia-San Sebastián in 1902. The museum was created to showcase highlights from Basque society & history. After moving a couple of times, it then found a permanent home in the former San Telmo monastery in 1932.

In 2011, the San Telmo Museum opened an expansion. This expansion connected the rich past of Basque Country with its modern future to form the Museum of Basque Society and Citizenship. 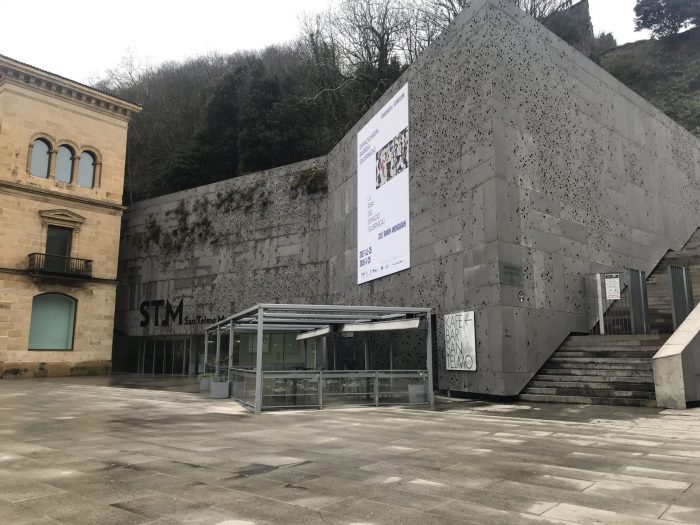 The new building is covered in 3,500 recycled aluminum sheets created by artists Leopoldo Ferrán and Agustina Otero with spots of moss & other plants. The design of the expansion connects the San Telmo Museum with the slopes of Monte Urgull behind it. This green wall will change over time, just like the mountain itself.

External staircases reach up to the roof & Monte Urgull above. The outside plaza is a popular place for donostiarra to hang out, especially kids playing football.

Inside the new museum addition, there are temporary galleries, a library, a cafeteria, and a shop, along with the main entrance hall.

The San Telmo museum (website) is tucked beneath Monte Urgull near the coast. It’s a good rainy day activity in San Sebastián. Or for those who have come to the city for its great food, it’s a place to kill time in-between visiting the pintxos bars of Old Town. The full ticket price is €6, but admission is free on Tuesdays.

Inside the San Telmo Museum

As the San Telmo Museum has expanded over the years, so has its scope. There’s a bit of everything Basque here, from historical artifacts to contemporary art. Thanks to the entrance hall being in the new addition to the building, visits start with modern times & then jump back to the past.

The temporary exhibition spaces are now the first parts of this Museum of Basque Society and Citizenship. When I visited, there was a special exhibition commemorating the 80th anniversary of Pablo Picasso’s masterpiece depiction of the bombing of Guernica, a town I had visited a few days prior. This gallery, called “Guernica The Laughter of the Space,” featured reconstructions & reinterpretations of Picasso’s famous painting at the Reina Sofia in Madrid. 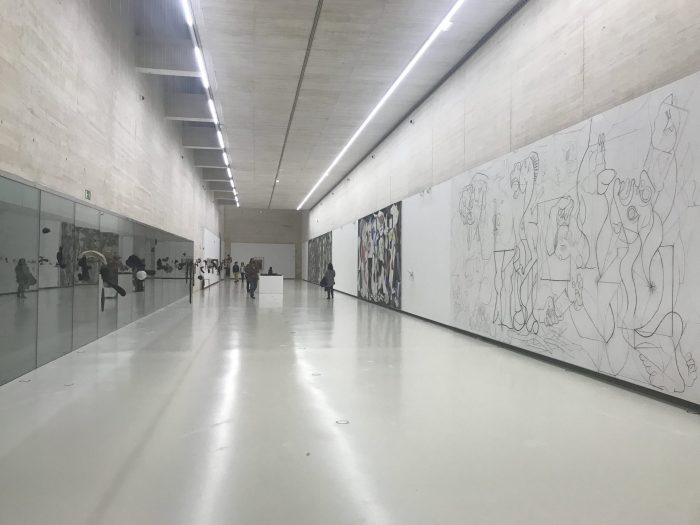 Thanks to the layout of the building, what initially appears to be a fairly small museum fills a long strip between existing buildings & the mountain. As you exit the modern expansion, modern San Sebastián meets the past.

The interior courtyard & cloister provides a break between the new sections & the old. 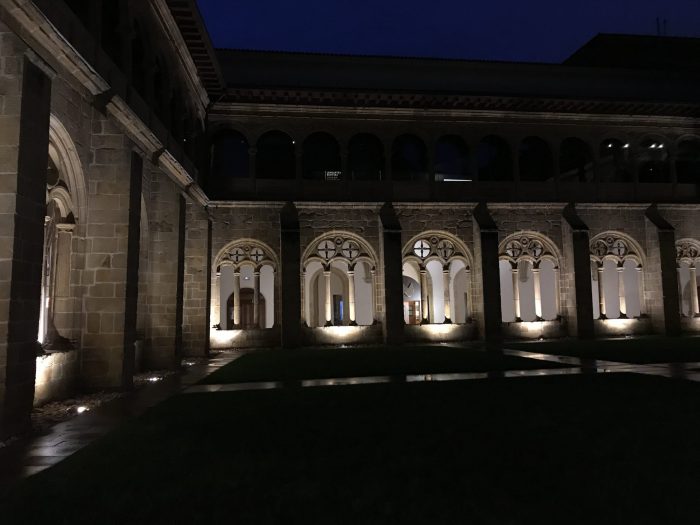 If you’re unaware of what’s to come, the main exhibition space is a wonderful surprise. With the entrance to the museum being a modern building almost hidden below a mountain, finding yourself in the expansive San Telmo Monastery is quite the shift. 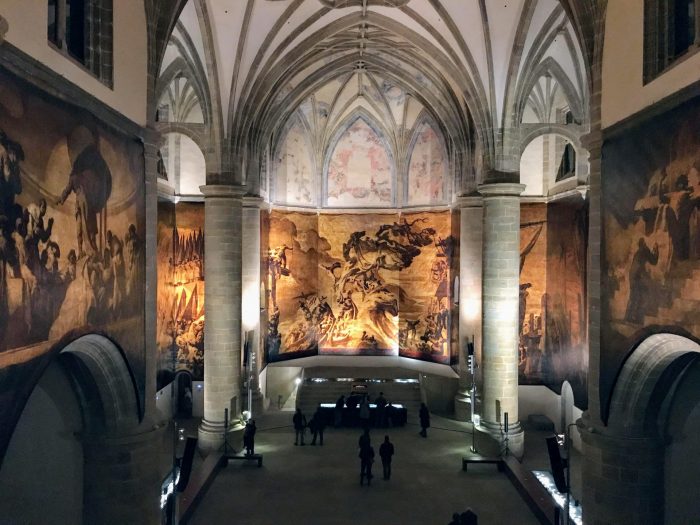 The San Telmo Monastery dates back to the 16th century when it was a Dominican convent. In later centuries these were barracks before finally becoming the home of the San Telmo Museum. The museum has restored what was once a crumbling building back to its past glory. During this restoration, archaeological research was done, including the discovery of old wall paintings.

The permanent exhibitions include the History of the Site, The Challenges of Our Society, Footprints in Memory, The Awakening of Modernity, and The Historical Collection of Art. Throughout these galleries are a variety of artifacts from throughout the centuries. Most of the signs are only in Basque & Spanish (though there is some English), but there is an audioguide available for other languages.

The History of the Site tells the story of the convent at San Telmo. This section also details more about the building’s restoration. Next, Footprints in Memory covers Basque history, including signs of spirituality such as steles (funeral monuments), as well as other artifacts & weapons such as a rare jineta sword from the era of Mohammed I of Granada. 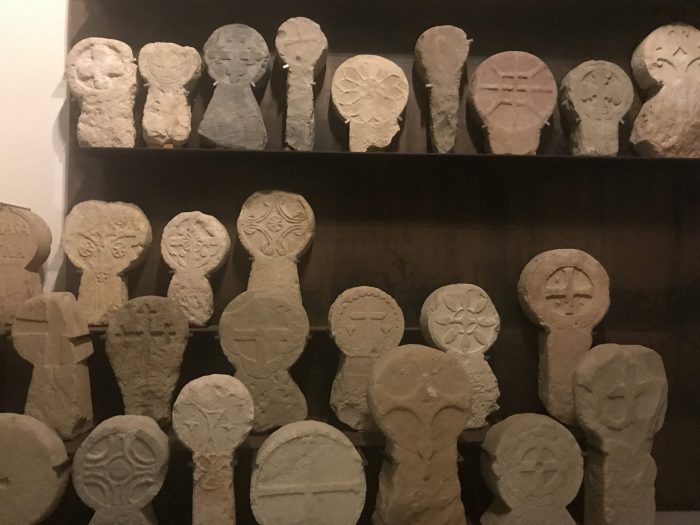 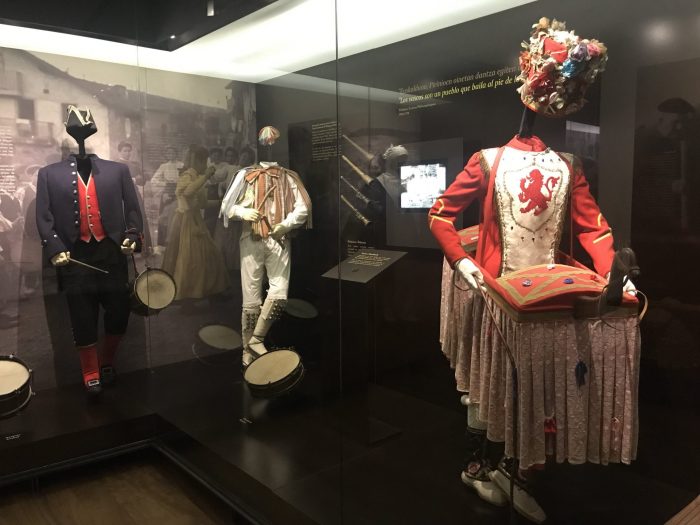 The upstairs galleries cover more recent Basque history. Inside this section, called the Awakening of Modernity, there are lifestyle collections as well as manufactured items including cars & motorcycles. Beloved Basque football teams Real Sociedad and Athletic Club Bilbao also feature in an exhibit. 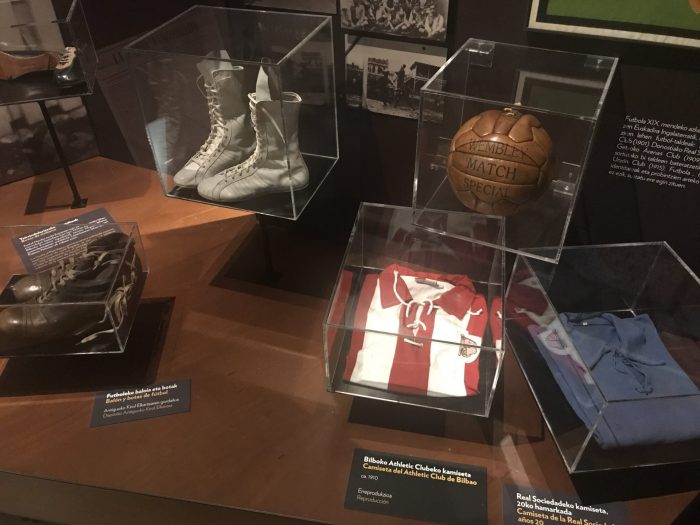 Finally, the San Telmo Museum concludes with The Challenges of Our Society. This audiovisual presentation covers sustainability, equality, and human rights. The exhibit connects the evolving past with the modern day, presented in a format that can be updated to show ongoing societal change.

The San Telmo Museum has a little bit of everything. It combines history, art, architecture, & sociology to preserve & teach the ongoing evolution of Basque Country.