Basque artist Eduardo Chillida lived most of his life in Donostia-San Sebastián, Spain. His work is on display in many locations around Basque Country. In San Sebastián, it’s possible to see several Chillida sculptures for free by taking a walk along La Concha promenade. The San Sebastián promenade is a beautiful place for a walk, passing by a couple of smaller sculptures before ending at one of Chillida’s grandest projects, the Comb of the Wind.

You can start the walk along the San Sebastián promenade to Eduardo Chillida’s Comb of the Wind in many places, but the best place to begin would either be in the Old Town after eating some delicious pintxos, at the towering Monte Urgull, or at the San Telmo Museum. An ambitious day of hiking would include Monte Urgull, then a walk along the whole promenade.

From San Sebastián’s Old Town, the walk to Comb of the Wind is about 3 kilometers (~2 miles). It’s possible to do the walk in just 30-45 minutes. However, you’ll likely take much longer as there are plenty of things to see and do along the way. Make a day of it, and spend some time at the beaches and cafés.

After leaving La Parte Vieja & passing City Hall & the library, the first place you will come to is Alderdi Eder Park. These gardens are a lovely place to sit and relax. There’s also a carousel, which kids (or those who want to act like kids) will enjoy. 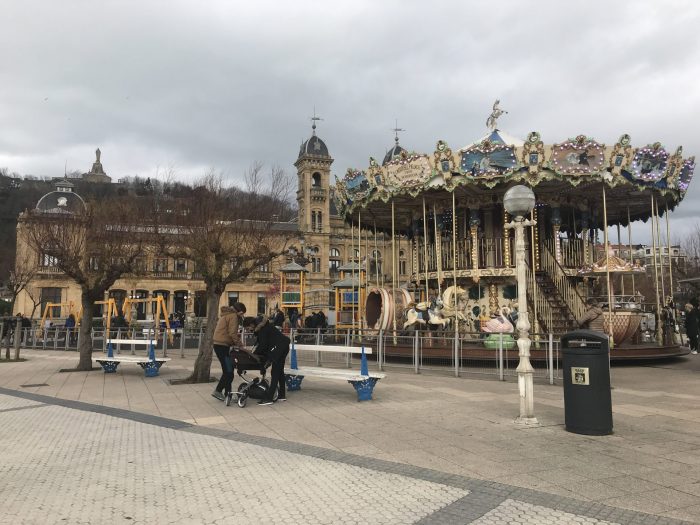 From Alderdi Eder Park, it’s easy to find your way along the San Sebastián promenade. In fact, if you look all the way along the curving bay, you’ll see your final destination, with the open ocean beyond it. Signs reading “Escultura Peine Del Viento” will also help guide you along the way.

This first beach is called La Concha Beach (Kontxako Hondartza). La Concha means “The Shell”, and it’s easy to see how the bay is shaped like a seashell. The entire promenade is also called La Concha Promenade.

As I passed by La Concha Beach, an artist was creating this design in the sand. 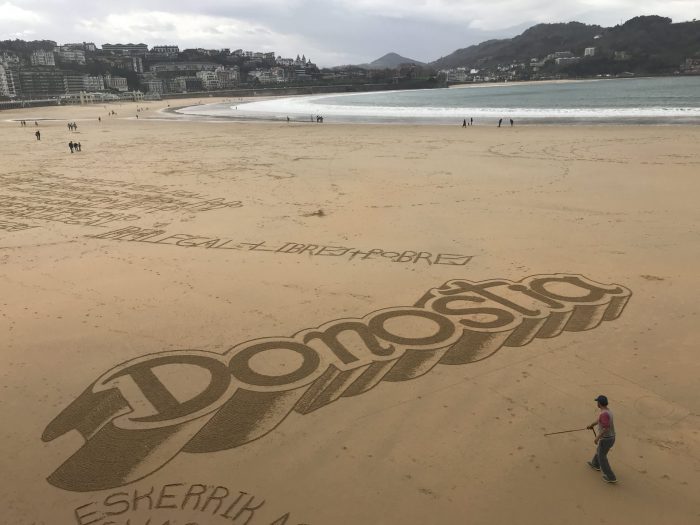 It was a grey January day, yet the beach & promenade were surprisingly busy. But it was the first time in a few days that it hadn’t been raining. There were even people out in the water. 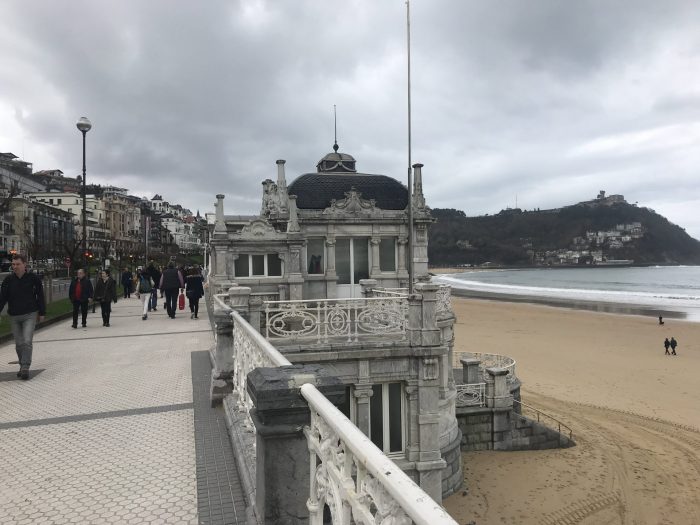 Along the entire La Concha Promenade, you can see Isla de Santa Clara in the middle of the bay. Santa Clara Island is small, but it has a lighthouse, panoramic views of San Sebastián, plus a small bar & restaurant. You can get to it by a seasonal boat from Old Town, or if you’re particularly adventurous, you can swim. 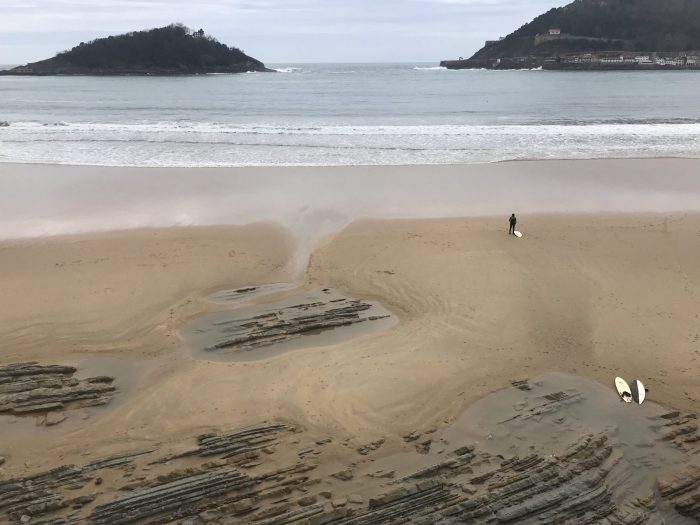 Just before the end of La Concha Beach, you’ll find the Monument to Fleming, the first of Eduardo Chillida’s sculptures along the San Sebastián promenade. The work is dedicated to Sir Alexander Fleming, who discovered penicillin. This granite sculpture was designed in 1955, and has sat in this prominent spot since 1991. 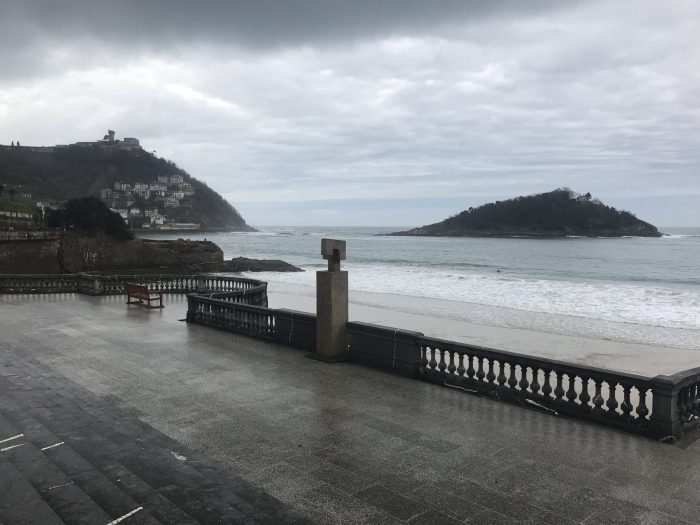 From here, the path continues through the Old Tunnel, which passes beneath a park that is home to Miramar Palace. The tunnel has a beautiful painting on the ceiling. 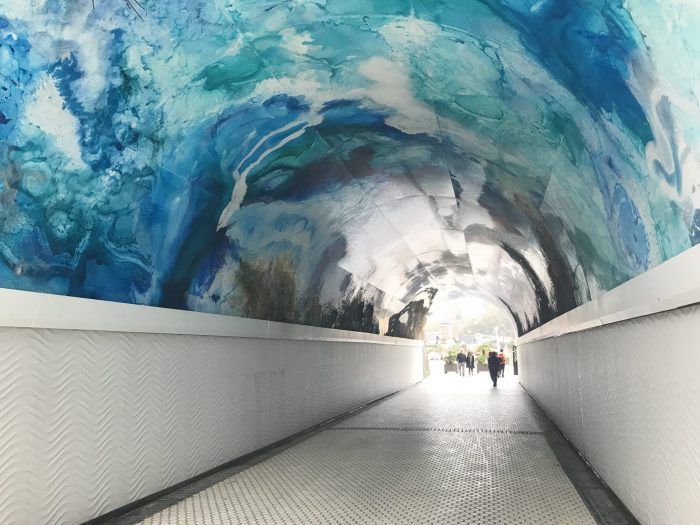 Because of how the tunnel passes through the hill that splits the two beaches of La Concha, it’s actually easy to miss another Eduardo Chillida sculpture on a piece of land that juts out toward the sea. This steel work from 1992, titled “Abrazo” (Hug), is situated at the end of Pico Del Loro.

To see even more of Eduardo Chillida’s art, visit the Chillida-Leku museum in nearby Hernani.

After exiting the tunnel under Pico Del Loro, the next part of the walk to Comb of the Wind passes along Ondarreta Beach. 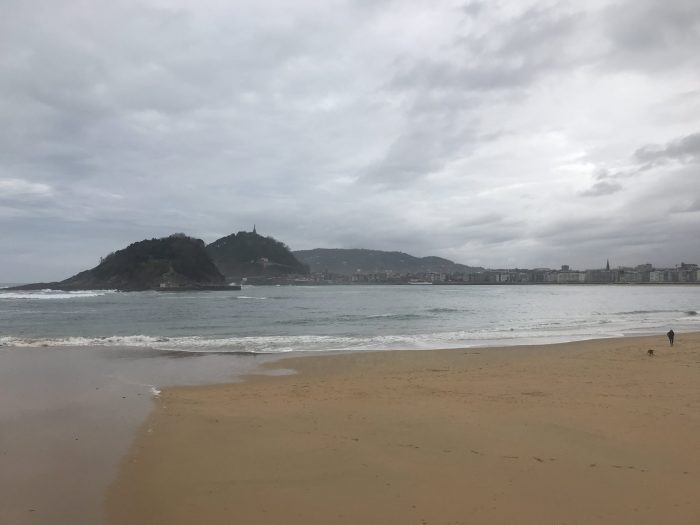 You can either walk along the promenade, the beach, or the gardens that also ring the shoreline. 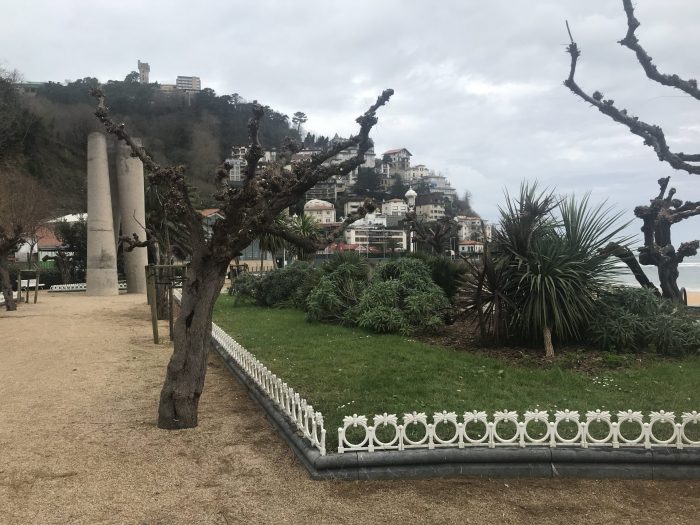 At the end of Ondaretta Beach, the San Sebastián promenade continues to curve toward the north. There’s a restaurant & beer garden at the tennis center, should you need refreshments.

This spot is also the base for the Funicular Monte Igueldo. The funicular railway runs up to the top of Monte Igueldo. The mountain has an amusement park at the top, along with great views. Given that it was growing colder & it looked even more like rain would be imminent, I ignored my love of funiculars & continued walking on to the Comb of the Wind.

At the end of the San Sebastián promenade, the city meets the sea. Conditions here are harsh. I had already seen the seawall struggling to hold back the Atlantic Ocean near the Old Town. El Peine del Viento has that same task, but it embraces the challenge rather than resisting.

Translated as “The Comb of the Wind”, Eduardo Chillida & Luis Peña Ganchegui’s El Peine del Viento is a powerful monument to the city they loved. This spot was Chillida’s favorite place in San Sebastián, and it’s easy to see why. It’s close enough to the city to be able to get to easily, but far enough away that you can connect with nature. La Concha Bay and San Sebastián are now behind you. 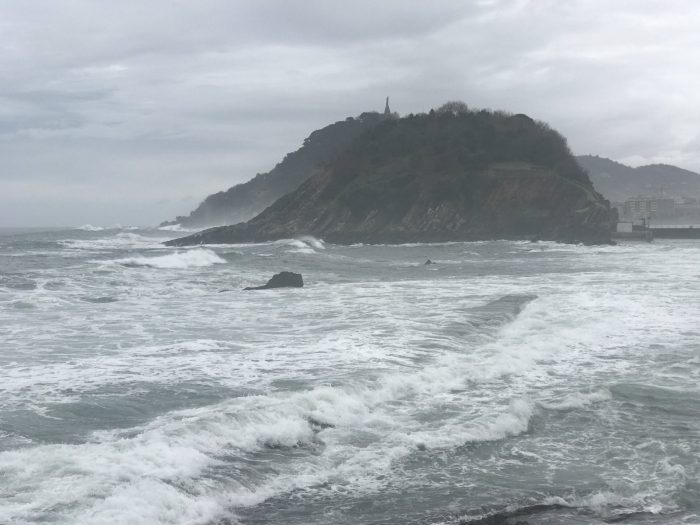 What starts as a plain stone plaza continues to march toward the sea to form an amphitheater. This is where the magic begins. Architect Luis Peña Ganchegui incorporated an element that connects the plaza to the ocean. Waves rush underneath the stone. If the water is strong enough, jets are propelled upward through seven breather holes, one to represent each of the seven Basque provinces. 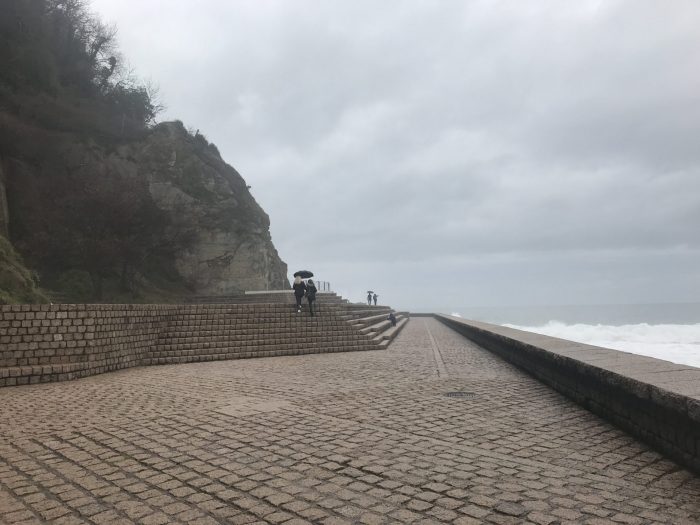 Standing near these holes (or above, if you’re willing to potentially take a rush of cold water to the face), you can hear the chilly waters flood below you. The waves crashing are a constant background noise, punctuated by the sound bursting from the blow holes. 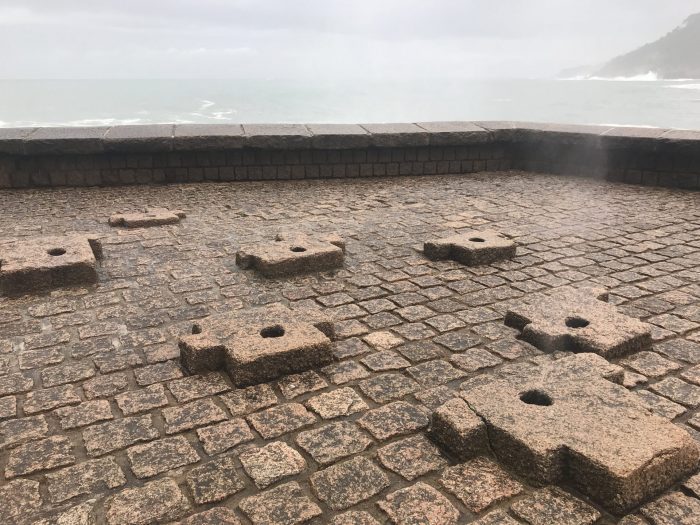 Of course, this is not the end of the promenade. As the plaza ends, there are three metal sculptures perched on rocks, just out of reach as they poke above the pounding waves. The sea winds blast through these three combs: the Comb of the Wind. 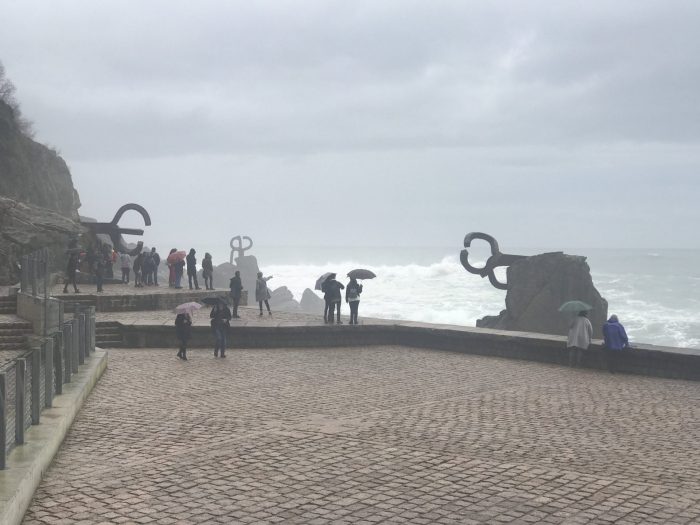 Eduardo Chillida’s work is incorporated into the surroundings. While the curved steel sculptures are part of the whole experience, the sea is still what dominates—a powerful reminder of nature’s fury. 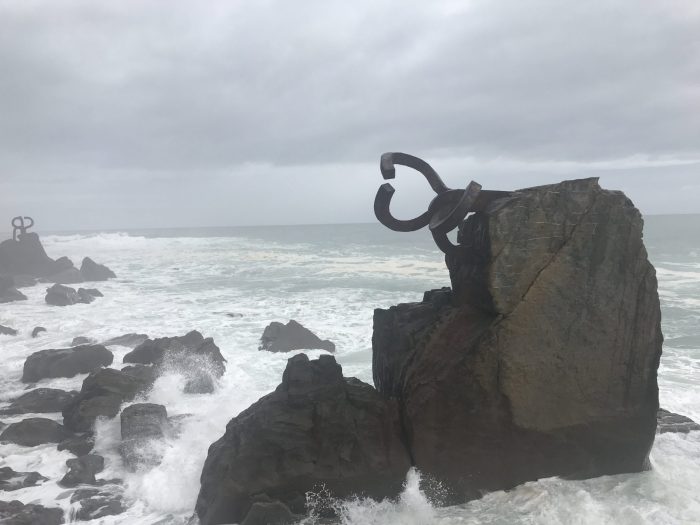 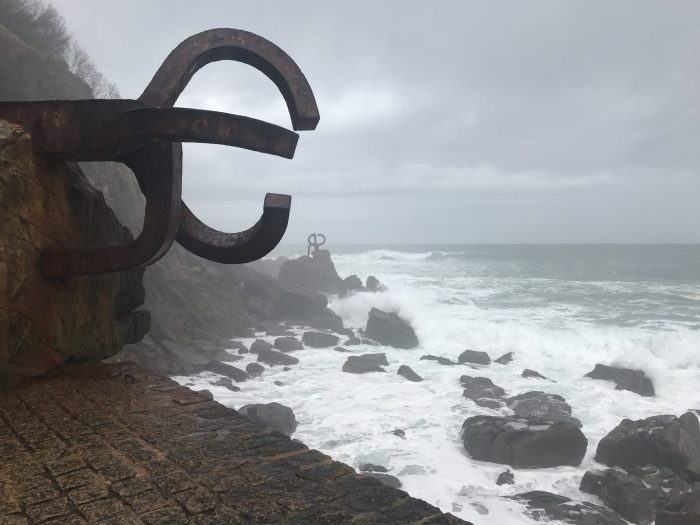 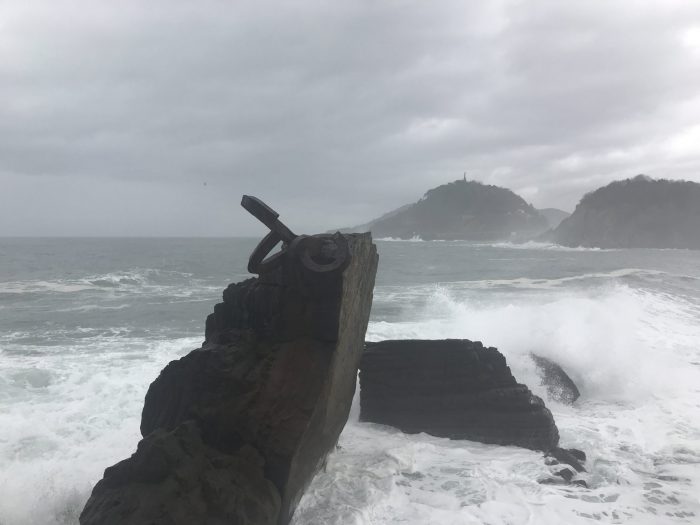 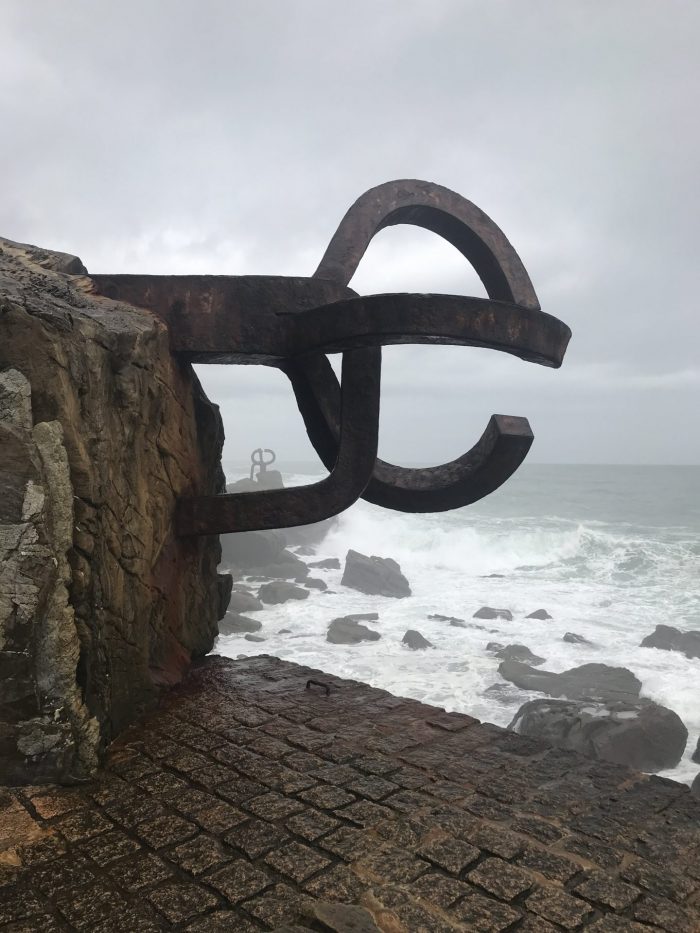 Installing the Comb of the Wind wasn’t easy due to the landscape & size of the 10 ton metal sculptures. This interview with Eduardo Chillida’s son tells more of the background of this symbol of San Sebastián & details the construction process, which finished in 1976. And if you’re unable to make it to San Sebastián to see El Peine del Viento in person, this site includes a 360-degree virtual tour. To get the full experience, spray yourself with a misting bottle.

On a stormy winter day, it was already quite wet at the Comb of the Wind. Rough seas are surprisingly good time to go on a walk along the San Sebastián promenade to El Peine del Viento, as this guarantees more wave & breather hole action. But it’s often a quick shift to rain. As the squall washed ashore, it was time to flee back to the warm embrace of San Sebastián. 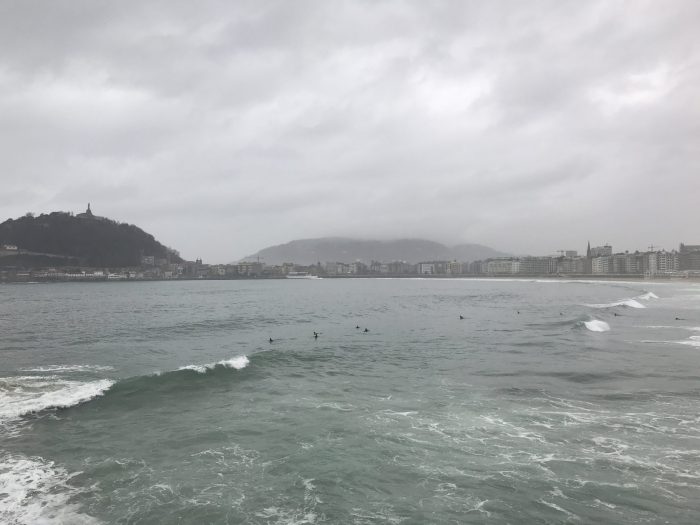 The round trip walk to the Comb of the Wind and back along the San Sebastián promenade is a pleasant way to spend a few hours. Sure, you could take public transportation for much of the journey, but there’s no better way to burn off all the pintxos you’ve eaten than a hike to the end of the world.