There are many great reasons to visit San Sebastián, Spain, but for most people, food is at the top of the list. With hundreds of great pintxos bars, plus plenty of other fine dining & local delicacies, it’s hard to go wrong. After spending some time rigorously eating food in San Sebastián, I found several favorite must-try dishes. Here are my recommendations for dishes to try in San Sebastián.

Crab a la Donostiarra is made from spider crab, which is mixed with onions, tomato, & leeks, then baked in the shell with breadcrumbs on top. 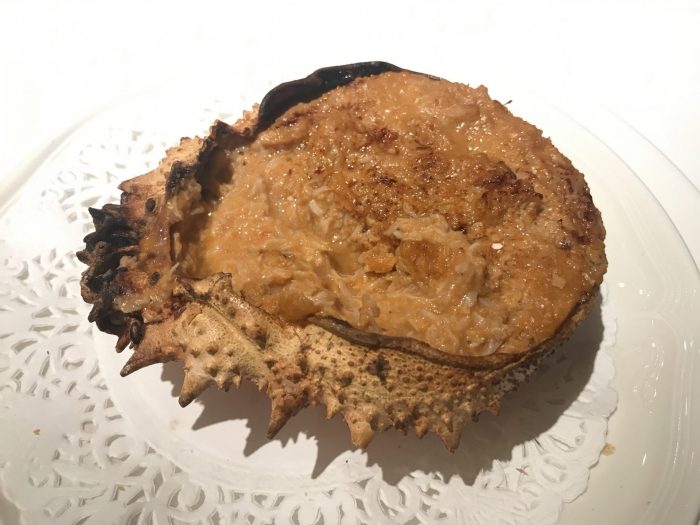 It’s just as lovely as it sounds on a cold winter day (or any time, if you’re a crab fanatic like I am).

The seafood in San Sebastián is exquisite. While you can’t go wrong with pretty much any seafood dish, one of my favorites was at a place called La Mejillonera.

La Mejillonera is a simple tapas bar that specializes in seafood, mostly mussels & calamari. Each is available with a selection of sauces, such as the tigres, which are mussels in tomato sauce. 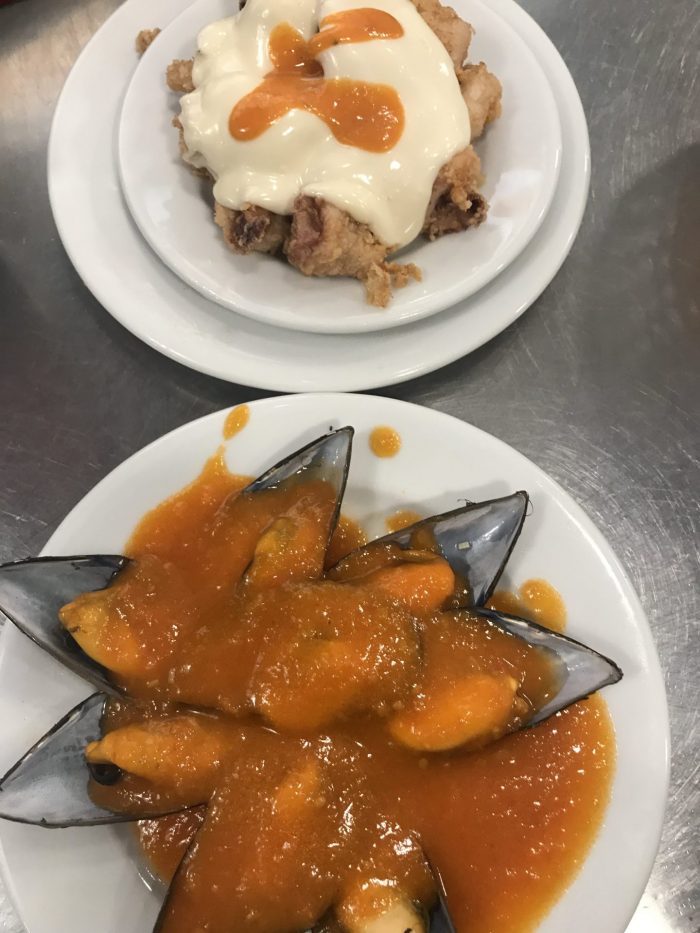 The local custom is to drop your mussel shells on the floor along with your napkins at this local favorite.

With so much great seafood around, consider these first two must-try San Sebastián dishes as catch-alls for all of the other great seafood to eat in Basque Country.

Honestly, this next spot on my list could be for most of the dishes at La Cuchara de San Telmo. Their made-to-order plates showcase Basque butchery. Veal cheek, pig’s ears, foie gras, and other meat delicacies fill the menu. But it’s the slow roasted suckling pig that stands out above the rest. 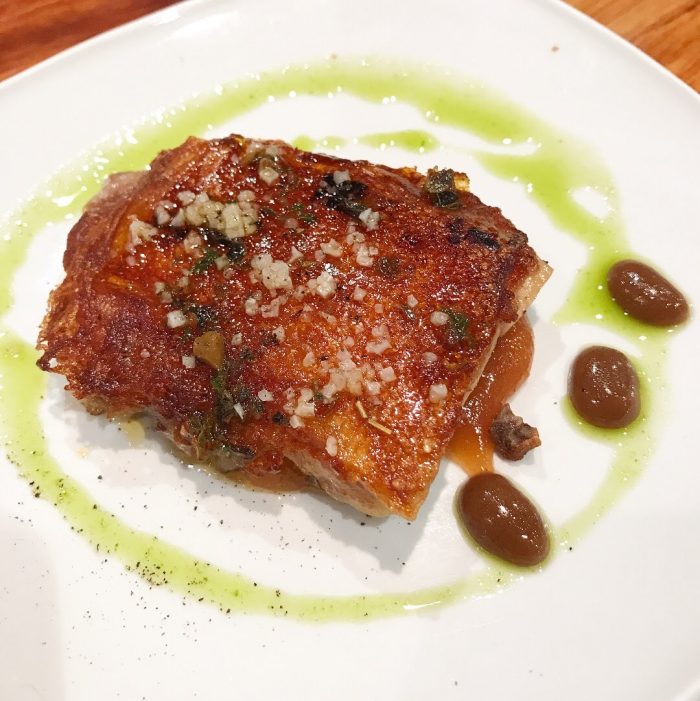 With crispy pig skin & delicate meat, with just a tiny bit of sauce, the suckling pig at La Cuchara de San Telmo might just have you skipping other bars to make a repeat visit. It’s salty, it’s fatty, and it’s delicious.

Ok, so this one is a bit of a cheat. But there’s no way that a list like this wouldn’t include San Sebastián’s ubiquitous snacks, the centerpieces of its fine culinary world. The definition of pintxos has expanded over the years to include dishes such as the above, but at their core, pintxos are generally some variation of meat, seafood, cheese, and/or produce, on a piece of bread (but not always), held together with a toothpick (but again, not always). 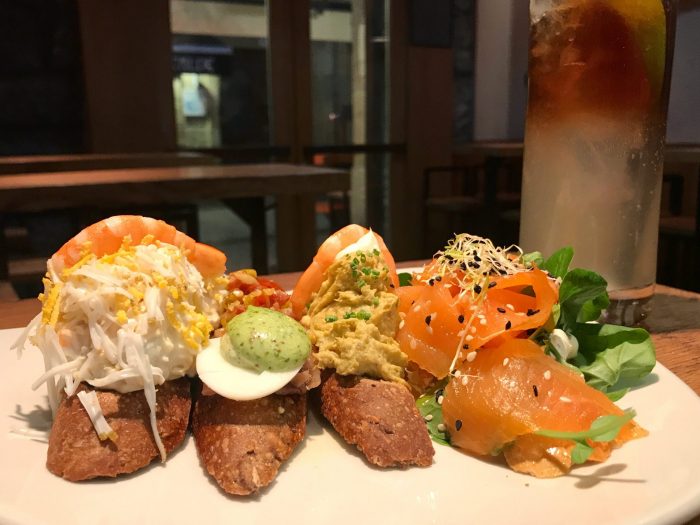 The small portion size of pintxos mean that you can have one or two at a bar and then move on, hitting several places in one night as part of a pintxos crawl. Visit enough pintxos bars in San Sebastián, and you’ll soon have a great list of your own favorite dishes.

Where to find them: Everywhere you look in San Sebastián, but start with this list

No meal is complete without a great dessert. After an evening of drinking & eating pintxos, it’s nice to end with something different. La Viña is a popular late destination due to one item: their Basque cheesecake. 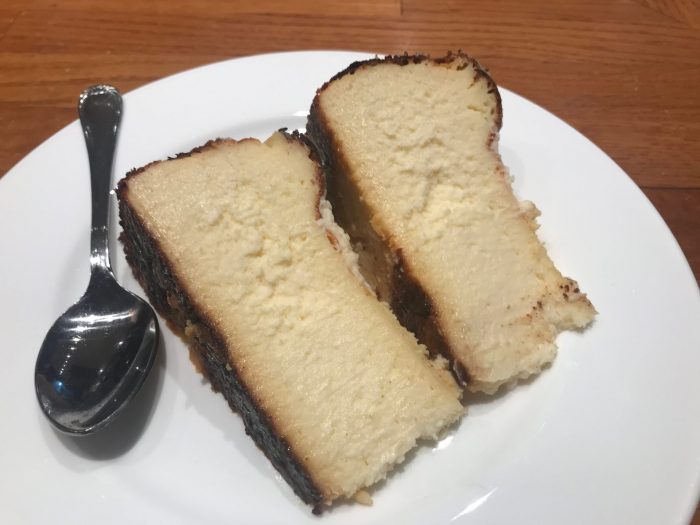 Basque cheesecake is crustless. Rather than being baked slowly, it’s instead baked quickly at a high temperature, leaving a caramelized outer layer that functions as a crust.

Meanwhile, the center remains smooth & light. The combo of that light center & the caramel outside is to die for, especially with a glass of sherry. Good luck not going to La Viña every night.

To learn more about pintxos and have a great guided experience, go on a San Sebastian pintxos tour.

If you’re visiting Basque Country for pintxos, be sure to also check out this list of the best pintxos bars in Bilbao.