After spending the day in New York City, I headed back to JFK airport before my flight to Manchester. Since I had flown in first class on the first part of my American award ticket overnight, I had access to the Flagship Lounge. 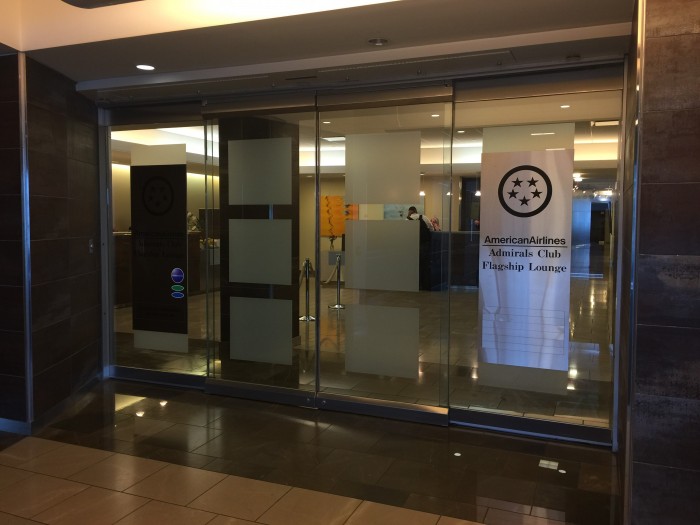 My first task at the Flagship Lounge was to take a shower. Since I’d flown on a red eye the previous night, then walked around hot Brooklyn for a few hours, the shower was necessary. I had no problems getting a shower room, as they didn’t appear to be in high demand. 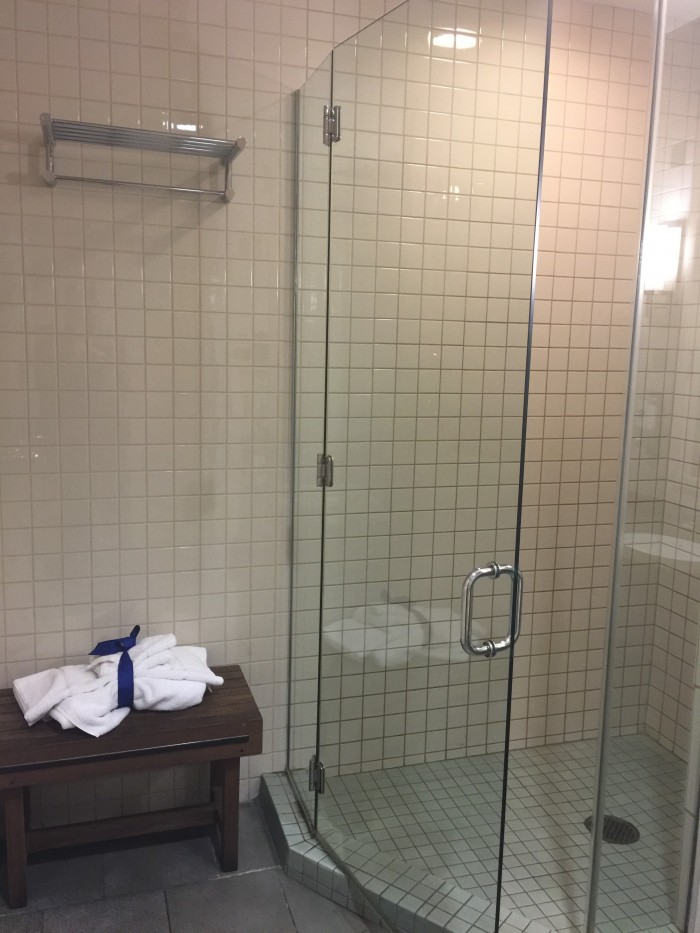 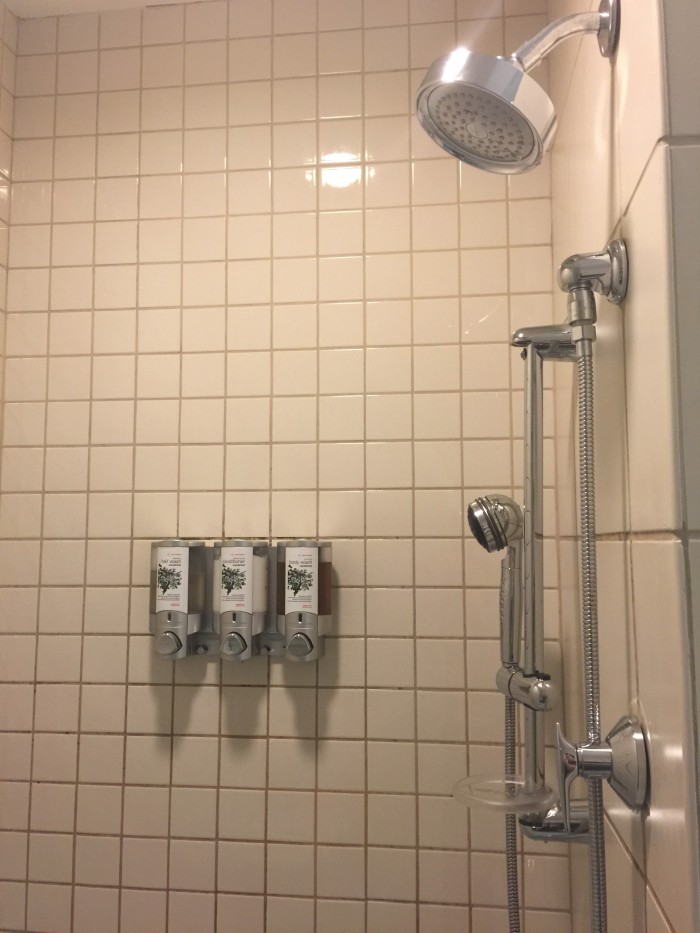 After my shower, I had some light snacks. There were small sandwiches & pastries. 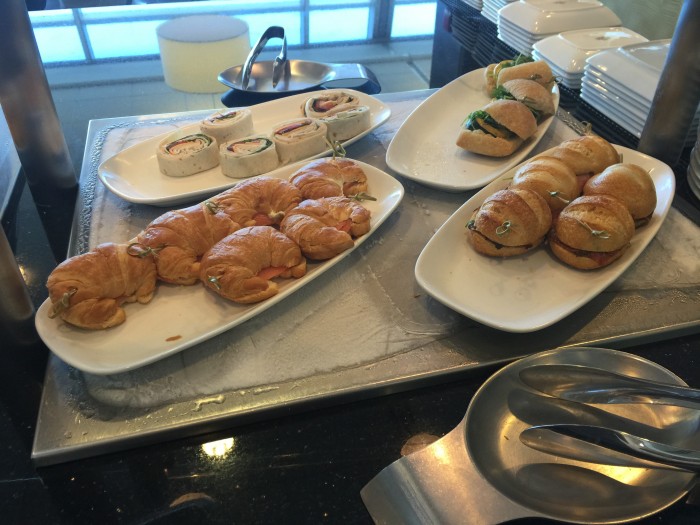 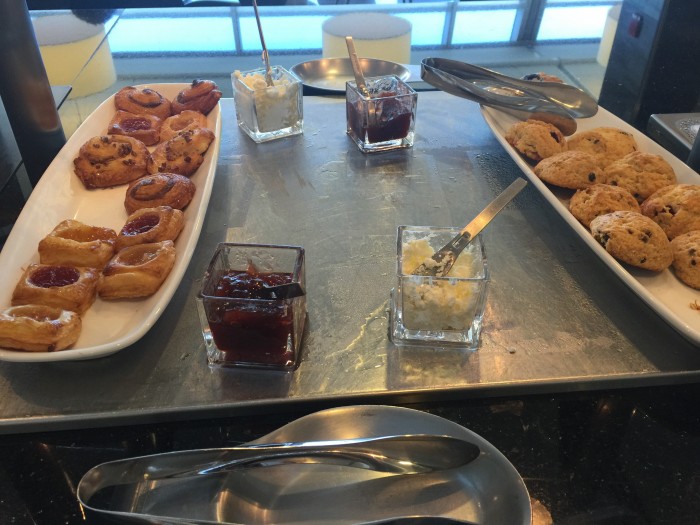 The bar was self-serve and had a decent selection of drinks. There was also a range of beers, including a couple of local options. 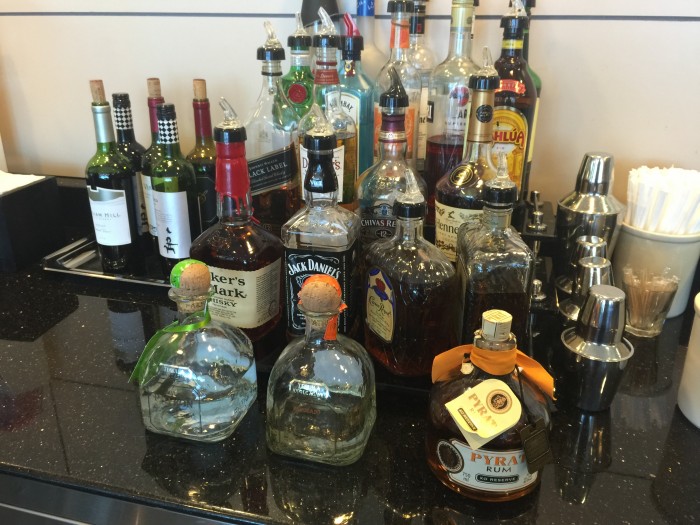 The dessert section was strong, featuring petit fours, cookies, and other baked items. 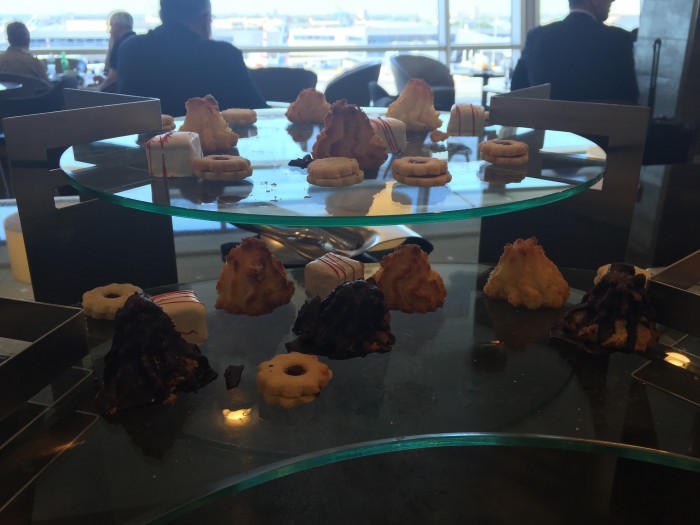 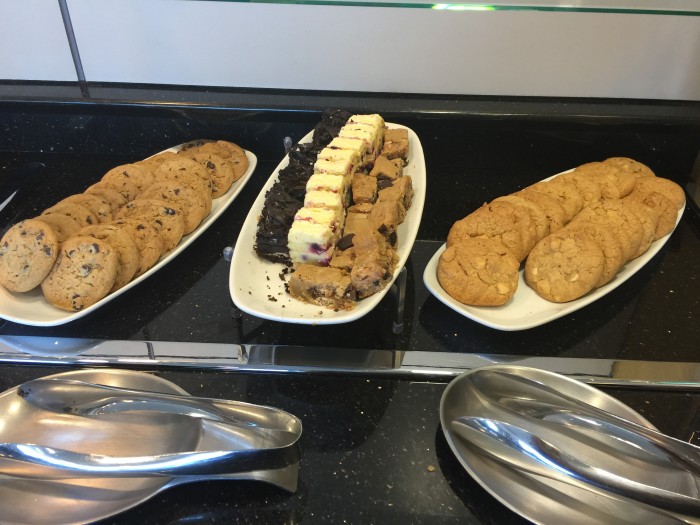 At 4pm, hot dinner, salads, and cheese were brought out. 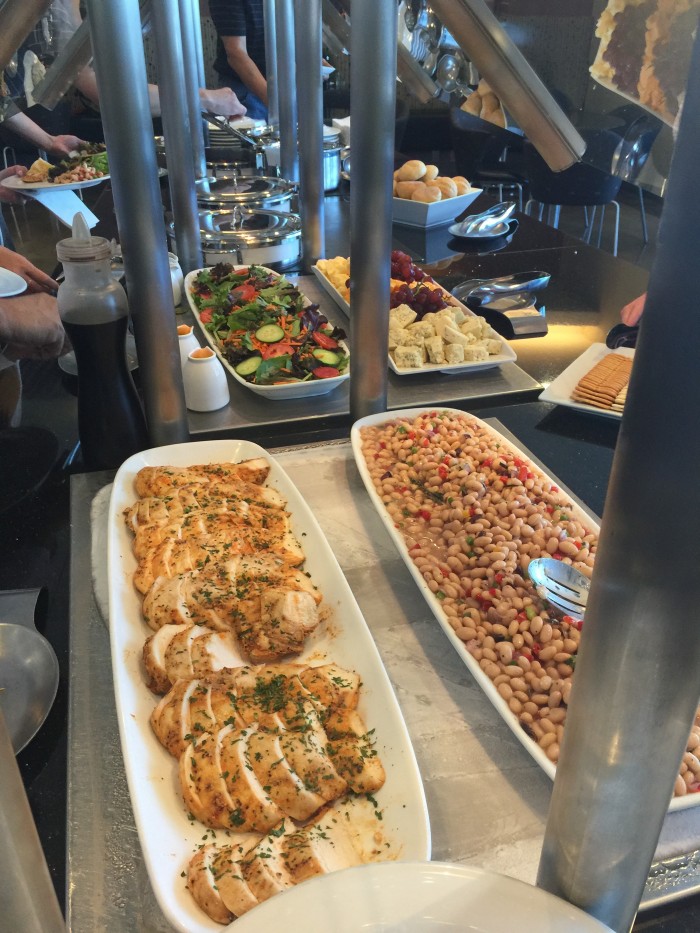 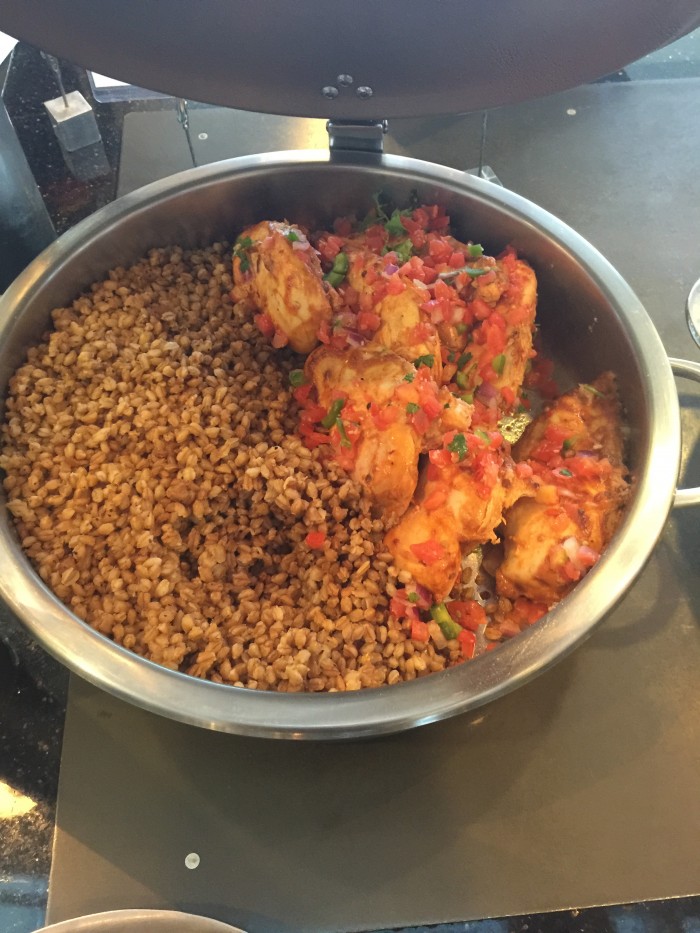 One nice thing about the American Flagship Lounge at JFK is that there is a long wall of windows on one side of the lounge, allowing lots of sunlight to enter. 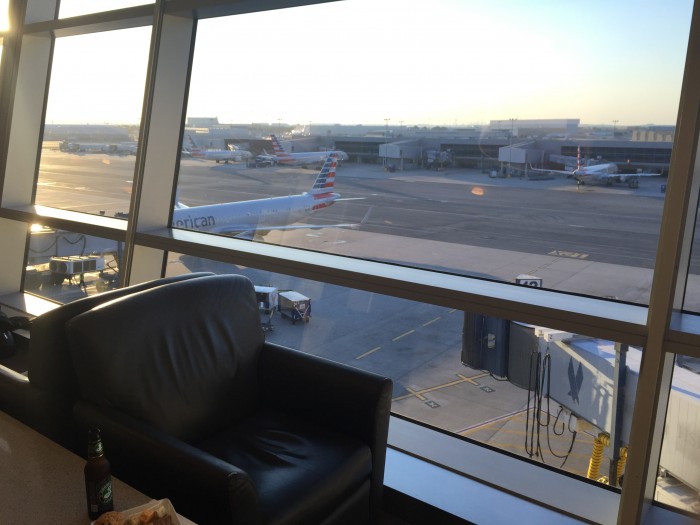 The business center in the Flagship Lounge is called the cyber cafe because apparently it’s still 1999 to American Airlines. There were a couple of areas devoted to computers. Not once did I see anyone using them. I’m not sure why some lounges have not been updated to free up this space, as most everyone who needs to use a computer while traveling these days is going to have their own laptop with them. 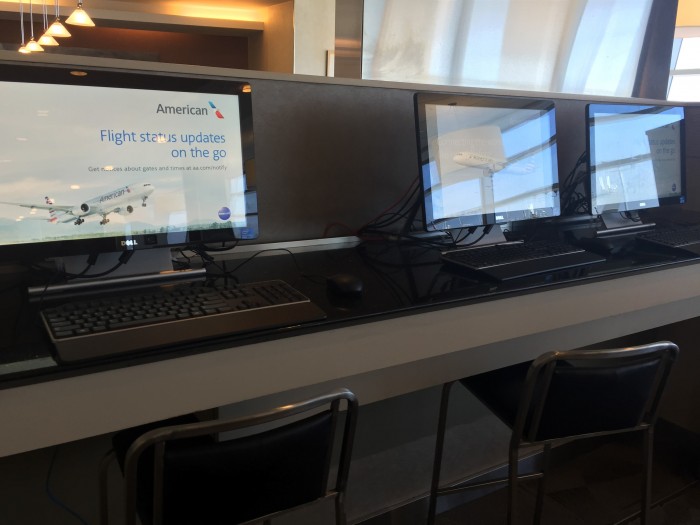 American’s Flagship Lounge at JFK isn’t a huge space. At times it seemed to be barely sufficient for the number of people in it, though there were always at least a few open seats. When I first arrived, it was relatively quiet. 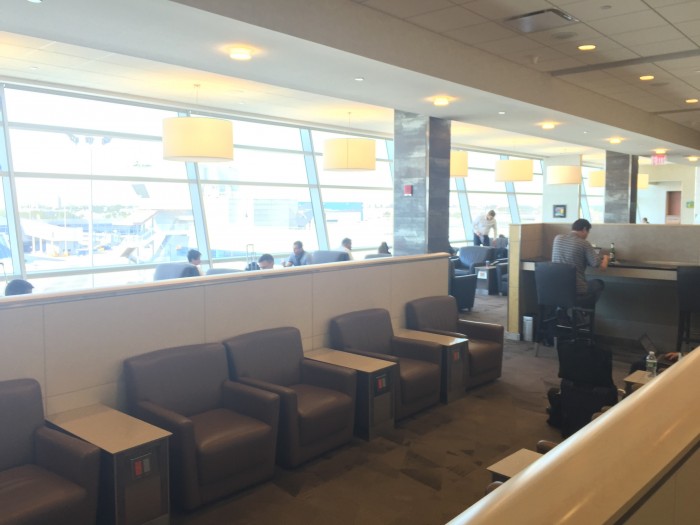 That said, the crowdedness was not helped by the couple who spread all of their things out over four chairs, disappeared for nearly an hour, sat down for 5 minutes, and then left for their flight. Around 6pm, the lounge finally started to empty out, as the European flights had started to depart. It was soon time for me to head to my flight to Manchester.

Overall, the JFK Flagship Lounge was fine, though it wasn’t as good as the Amex Centurion Lounge I had visited at SFO the previous evening. It’s a step up from a regular Admirals Club thanks to the hot food, but the lounge is still dated, and not quite up to the level of some international lounges.