Thanks to my back-to-back red eye flights on my way to Europe, I ended up with about a 12-hour layover at New York’s JFK airport. I didn’t want to spend the entire day in the airport, so I decided to head into the city for a while. If you have a similar layover, it’s plenty of time to have a nice day in New York City.

I took the AirTrain from JFK to Jamaica, then I got on the subway. I took the J to Delancey St-Essex St, which is the first stop in Manhattan. I had decided to spend the day embracing my inner hipster by exploring Williamsburg, and I realized that the best way to do so would be to kick things off with a morning walk across the Williamsburg Bridge. 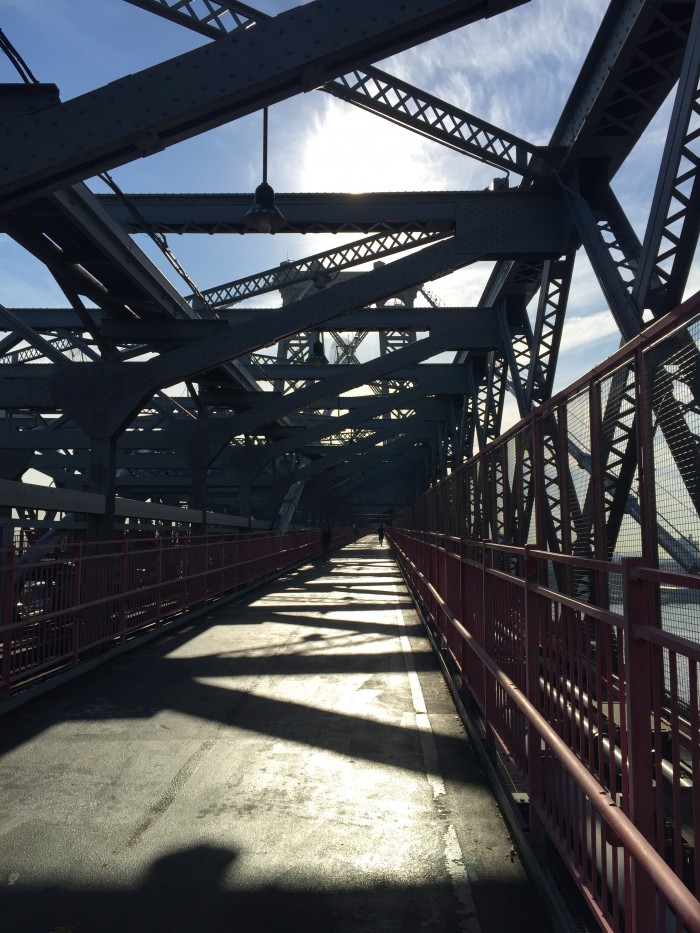 It was a sunny day, and I could already tell that it was going to be warm. The bridge was fairly quiet, with some joggers and cyclists, most of them heading into Manhattan from Brooklyn. 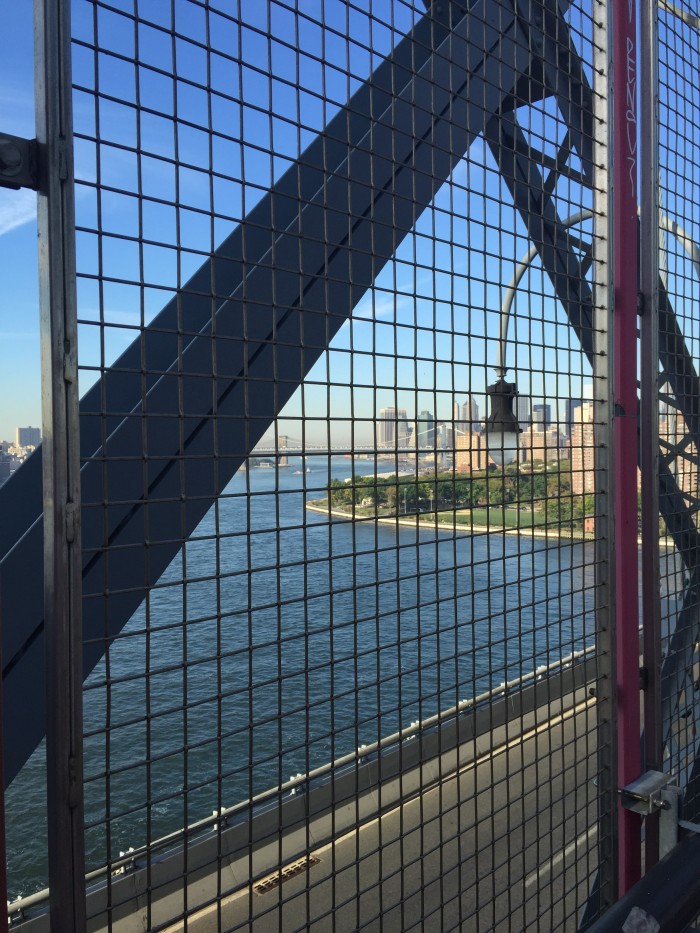 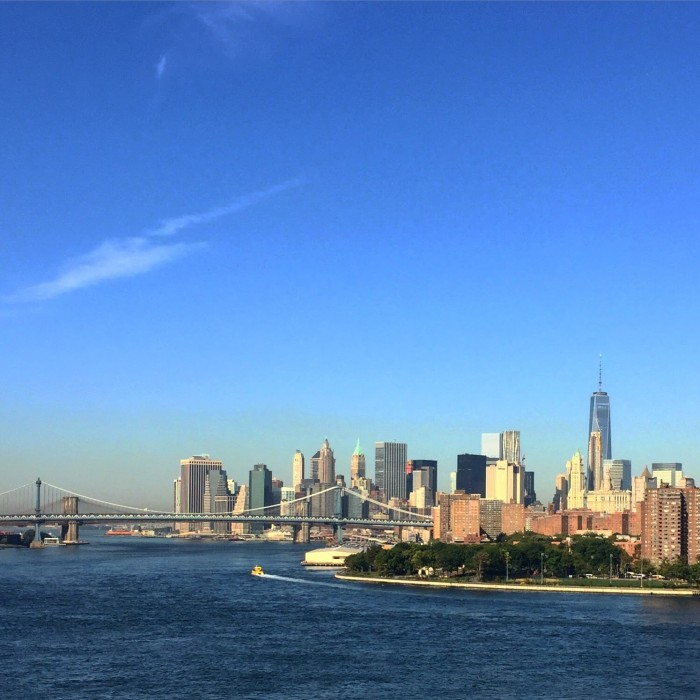 Once I was across the bridge, I needed some breakfast. One of my goals for the day to eat as much quintessential NYC food as possible, so I of course needed to have a bagel & lox. I went to a place called The Bagel Store. It was a pretty solid bagel. 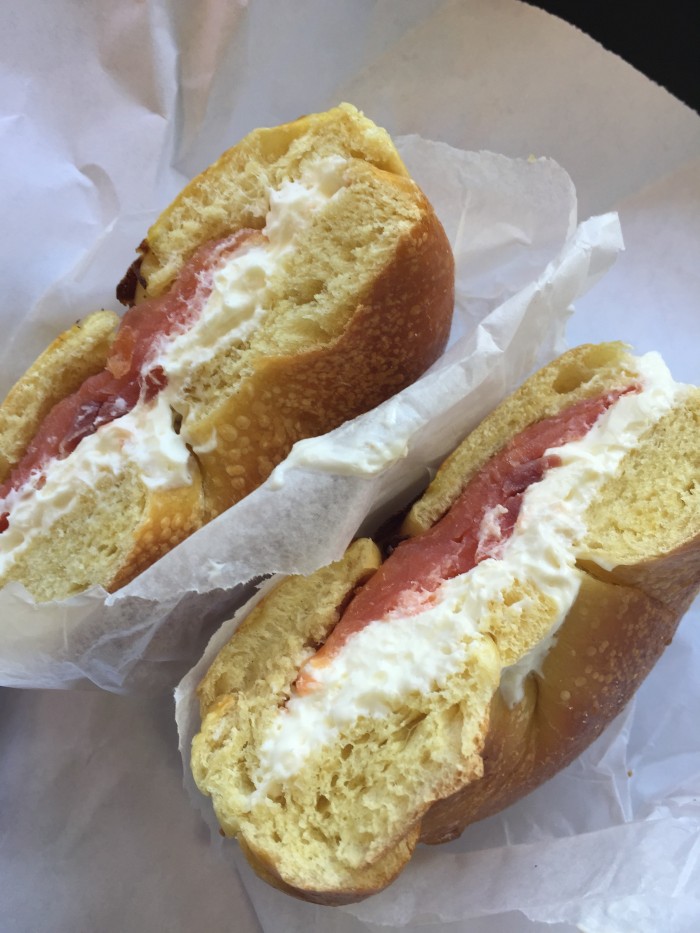 After breakfast, I wandered around for a while, but I realized that being so early, nearly everywhere was closed. Instead, I headed toward the East River, where there are a couple of parks. 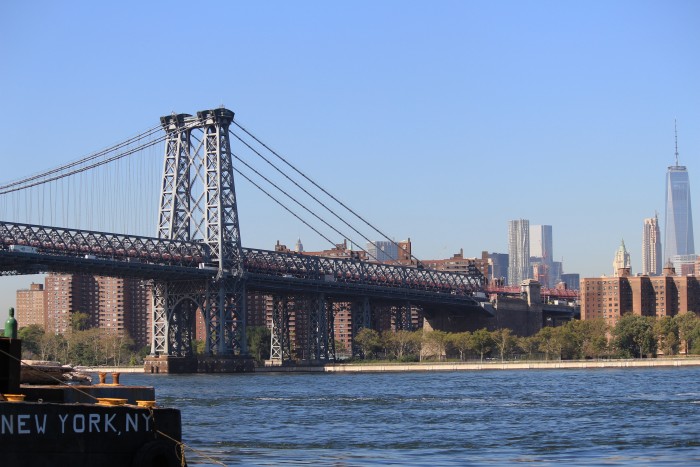 I started at Grand Ferry Park, a tiny, but nice park in Williamsburg. I watched traffic on the river for a while, took some photos, and read a book. It was a relaxing morning. 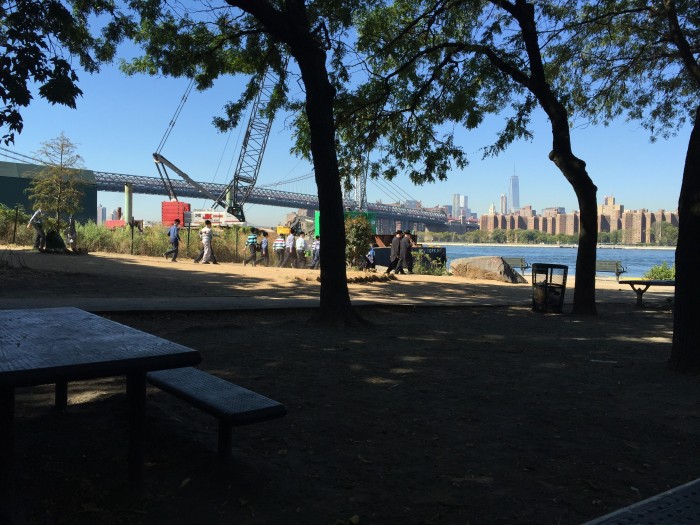 I moved on northward to another park in a very new area. As I stood watching smoke from a fire in midtown, a guy approached me. He asked if he could interview me for a school project. He was a journalism student, so I think he was just getting practice. He asked me what I thought about the weather. I said it was hot. He asked me to elaborate. I said it was really hot.

Because it was. I didn’t realize this until a little bit later when I checked my phone, but it was already 89 degrees in Brooklyn, and it was only noon. I had looked into the weather before setting off on my trip, and it was only supposed to be in the low 80s. As a result, I had opted to at least skip carrying a jacket that day, but I was still wearing jeans. Since the rest of my trip was going to be in Northern Europe, I wasn’t going to be needing any summer clothes. This all made for a rather uncomfortable day, somewhat limiting what I felt like doing.

I walked around for a while more, then went to have some pizza for lunch. While there were several pizza spots to choose from, I headed to a tiny, highly-rated slice place called L’industrie Pizzeria. 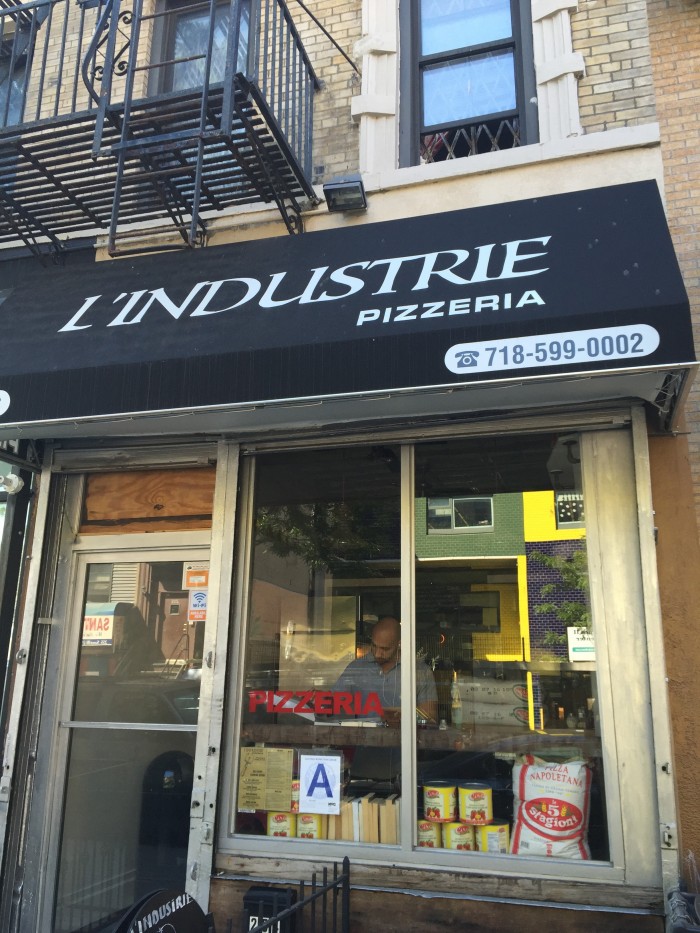 It was phenomenal. I had a couple of slices of white pizza, which is even harder to find done well outside of the tri-state area than regular NY slices. The restaurant also had bottles of spicy garlic extra virgin olive oil to put on the pizza, which took it to an even higher level. If you’re in Williamsburg, I can’t recommend L’industrie enough. 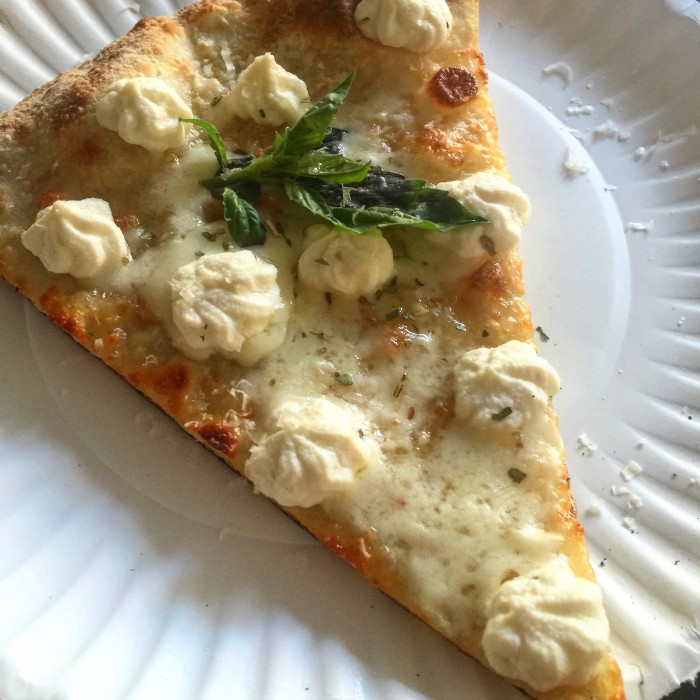 After walking around a bit more, it was clear that the heat of the day was going to make it difficult to do too much more. I figured ice cream would be the perfect way to close out the afternoon before getting on the subway back to JFK. There was a nearby spot called -321 degrees that has ice cream made with liquid nitrogen, resulting in a supremely creamy ice cream. Unfortunately, the shop was supposed to be open at 1, and when I went at 1:15, it showed no sign of opening. I waited for a few minutes, and then decided that it was a sign that I should just head back to the airport to relax a bit in the lounge before my flight to Manchester.

I got on the subway at Marcy Avenue after admiring the stained glass windows of the station, and I was on my way to my next destination. 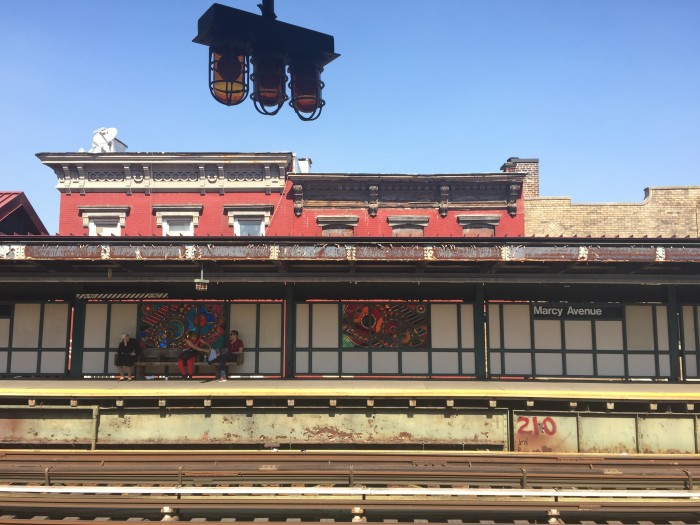 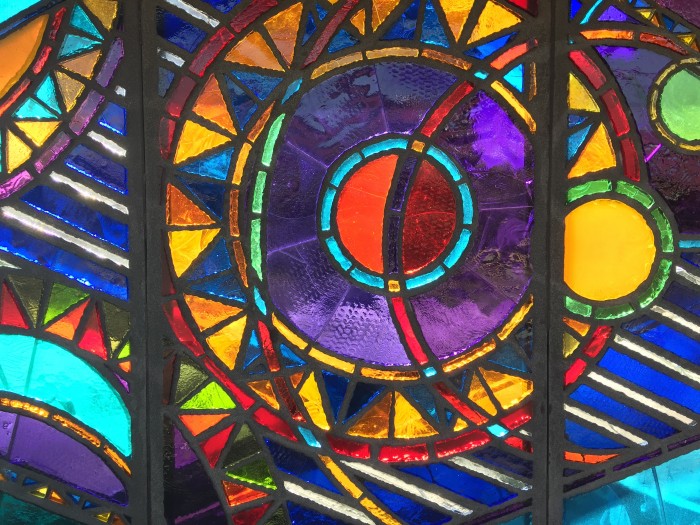 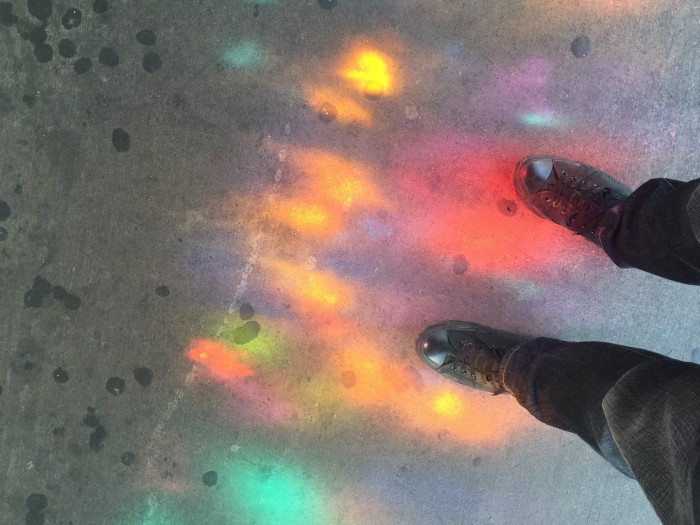