I arrived in Riga, Latvia early in the morning before my hotel room was ready. I left my suitcase at the hotel, and set off to explore the Old Town for a while. The entire Historic Centre of Riga is designated as a UNESCO World Heritage Site.

My first stop was obvious. On my way into Old Town Riga, I had spotted the tallest tower around. The tower was part of St. Peter’s Church, which is in the center of the oldest part of town. 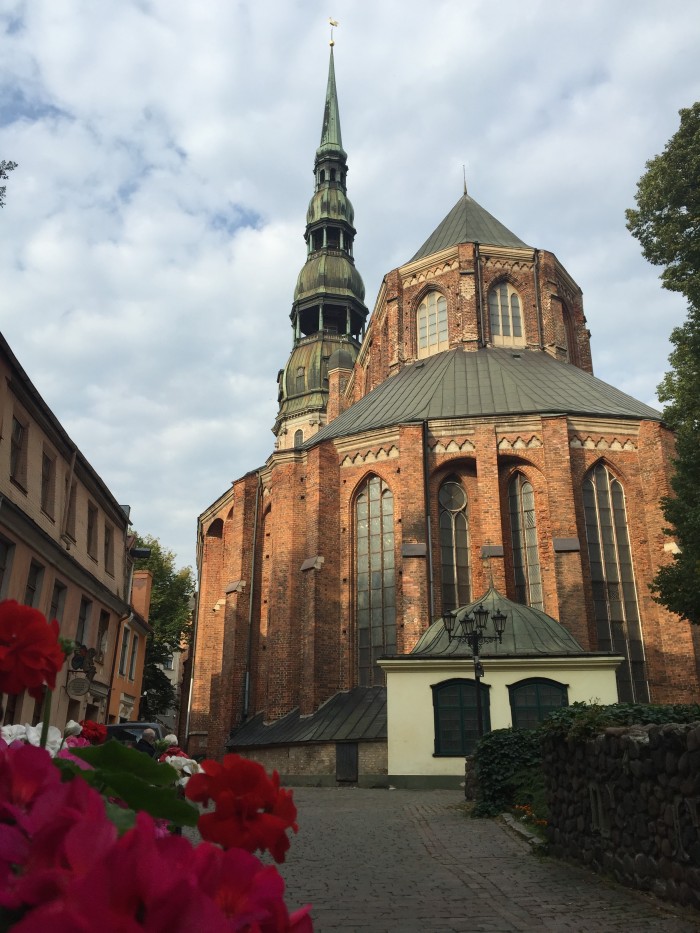 Entry to the church is a little steep at 9 Euros, but the view is fantastic. 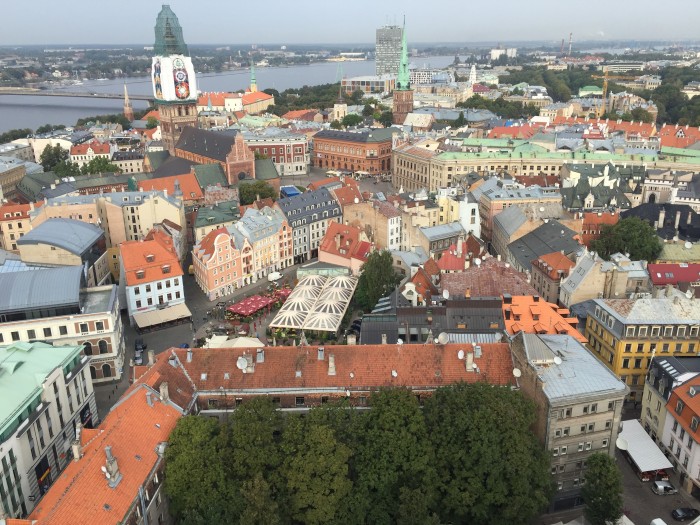 I did feel bad for one elderly couple who had gone in at the same time as me. While there is an elevator up to the top of the tower, the elevator is only reached after you’ve gone up a couple of flights of stairs. They ended up passing on the view, which was a shame.

Perhaps it was because I was there during the week, but most of the tourists in Riga were much older than I was. This suited me to some extent, since I am secretly old. Given the number of parks in the city, I found it to be a rather relaxing place.

Well, I found Riga to be relaxing except for the five minute period inside the church where a large tour group raced through it. I continue to be unable to understand the appeal of being in a place for so little time, especially one as pretty as this church was. 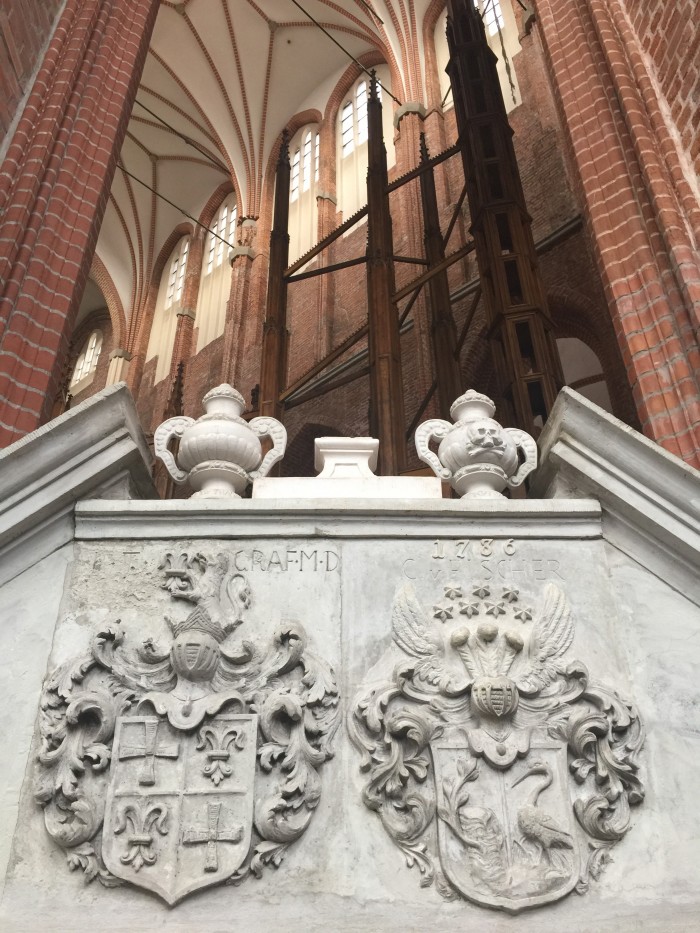 The church was rebuilt after it was destroyed during World War II by German bombs on June 29, 1941. 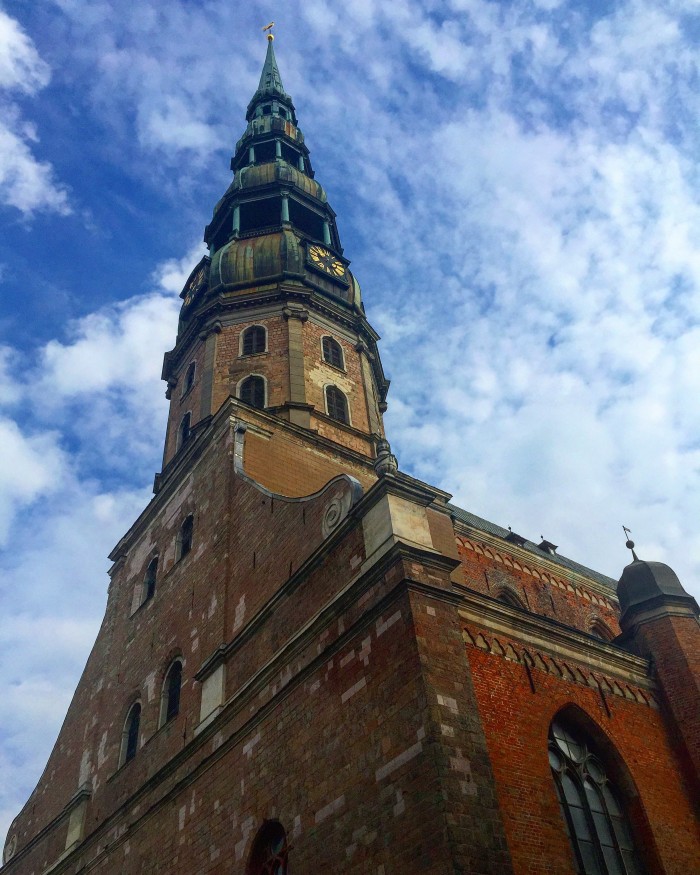 Also inside St. Peter’s Church were a few other exhibits, including rooster weather vanes and a local sculpture competition. This was a great use of the space, and a nice way to tie it to the local community. More places of interest should do similarly. 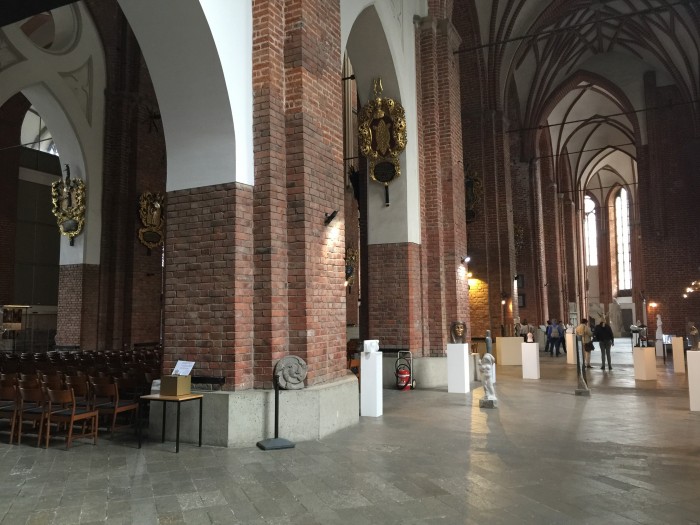 The old town of Riga is a quaint space with old (or at least restored buildings), mixed with more modern construction. It’s a small area that can easily be traversed on foot in perhaps 15 minutes or so. 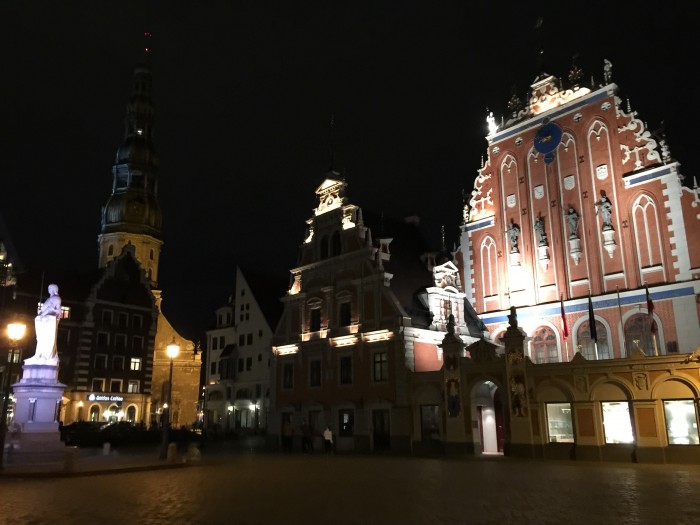 On my second day in the city, I walked around some of the green parks that ring the old town. The park is formally called Bastejkalna parks, or Bastion Hill Park. 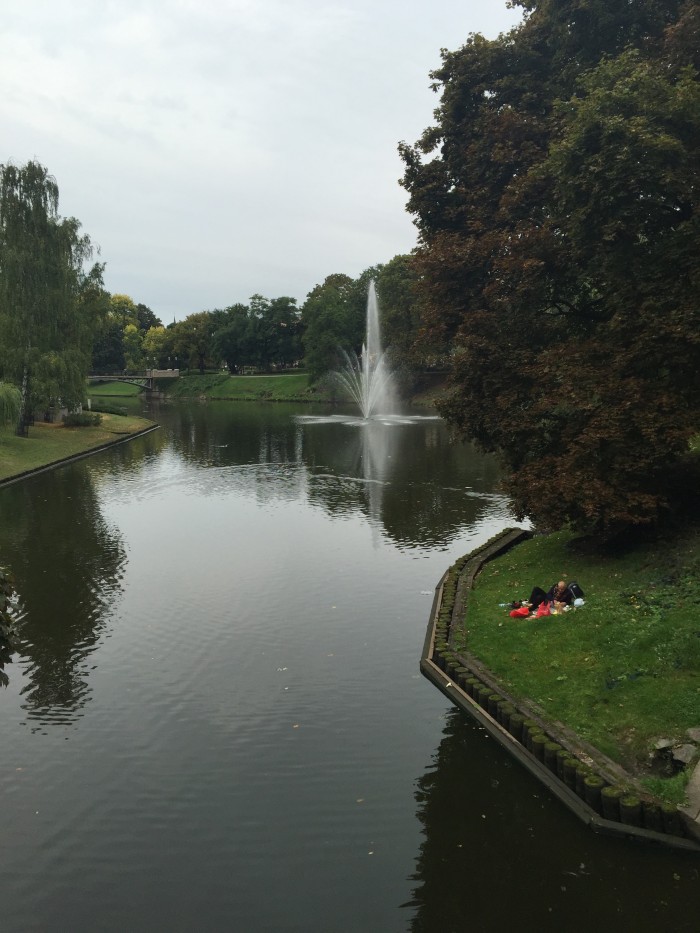 Given the small size of Riga’s city center, the park is an impressively grand space filled with lakes, flower gardens, and lawns, plus buildings such as the Riga Opera House. Small boats pass along the canals, and there are plenty of walking paths. While the weather was a bit gloomy when I was in Riga, it would be a great place to picnic on a sunny day, especially if you visited the Riga Central Market first (more on that in my next post). 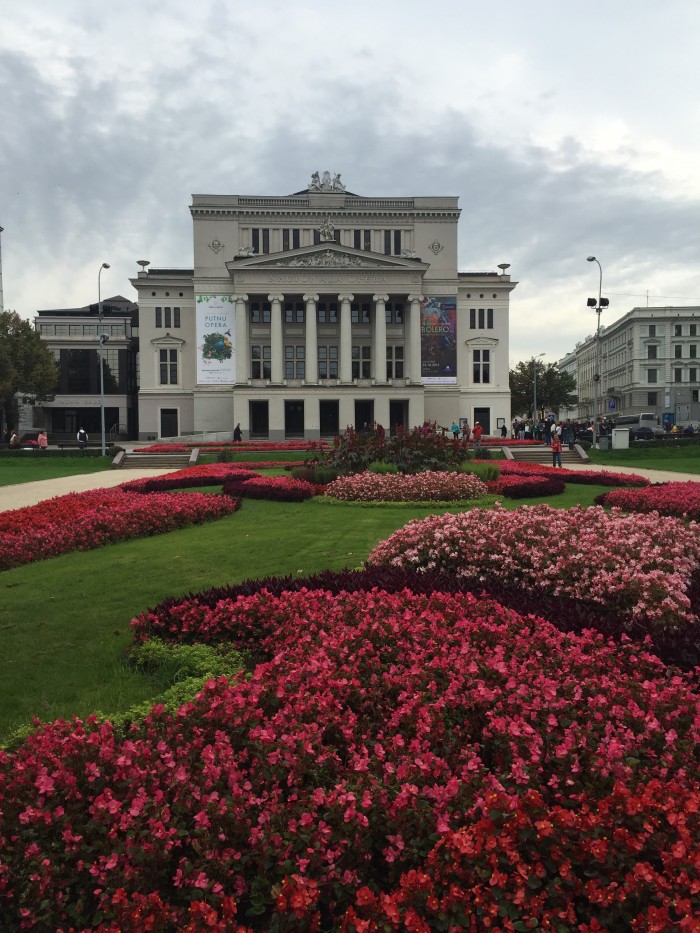 The park is filled with statues, most of which are wearing heavy winter clothes. Riga is not a place for those who hate the cold. 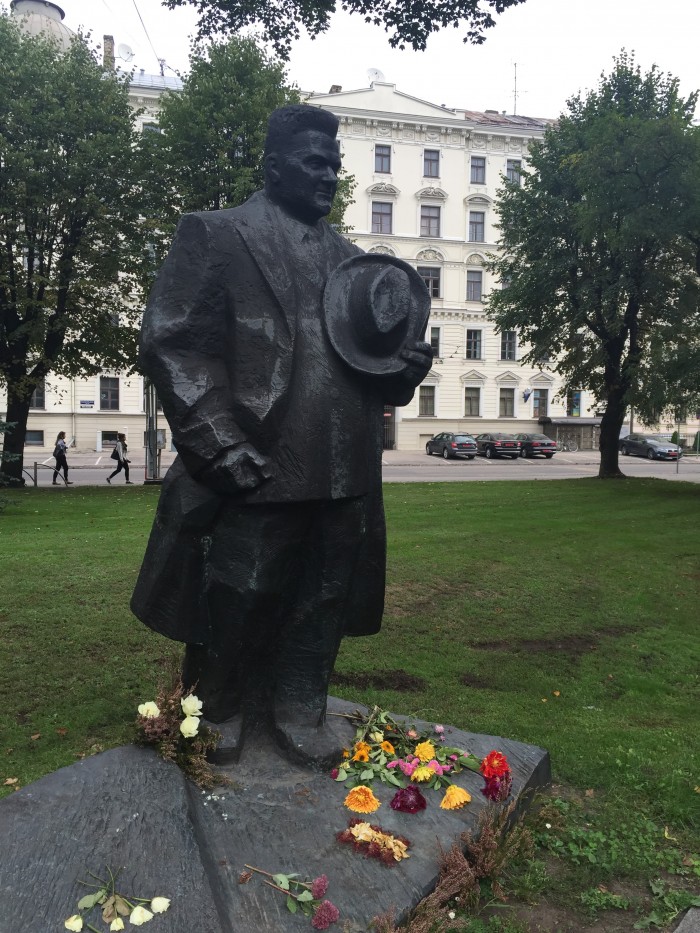 In the middle of Bastion Hill Park sits an enormous pinnacle called the Freedom Monument. 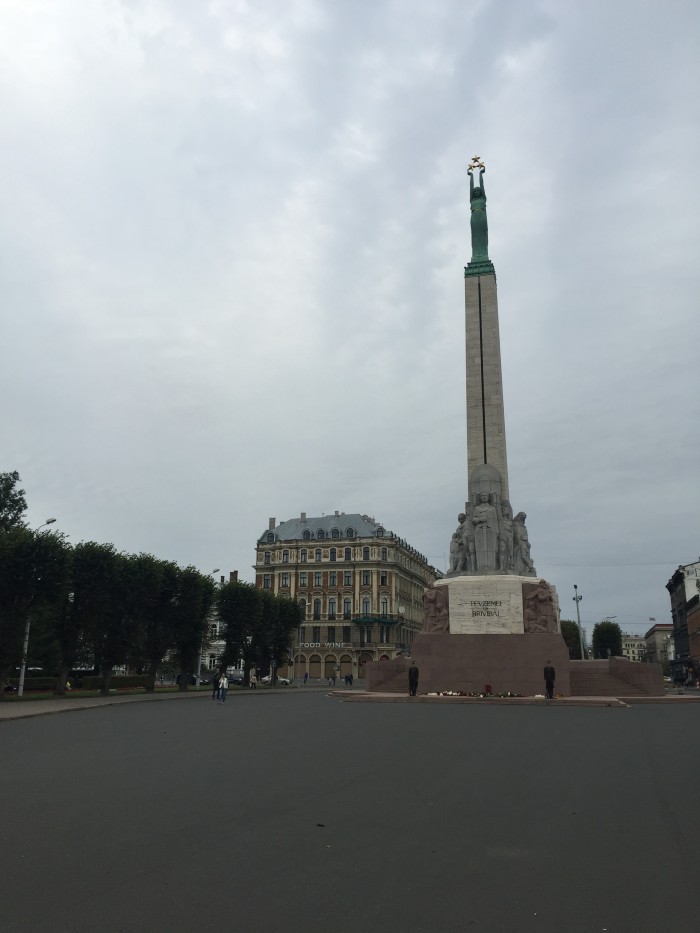 The Freedom Monument is dedicated to the people who lost their lives during Latvia’s 1918-1920 War of Independence. It also has served as a memorial to the continued struggles of the Latvian people during later German & Russian occupations that dominated much of the rest of the 20th century. Guards stand by the monument. 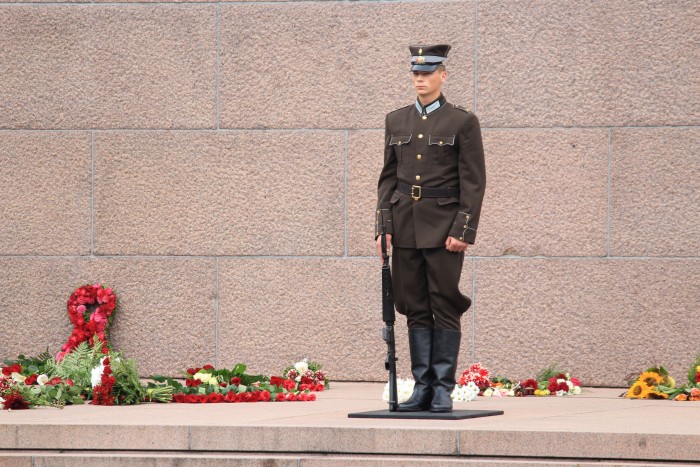 After continuing northwest through Bastion Hill Park, I then cut to the northeast to check out one of the most picturesque spots in Riga, Alberta Iela (Albert Street). 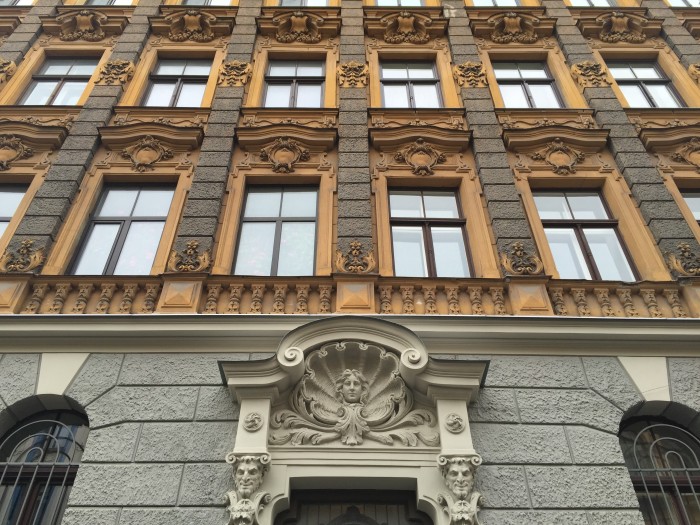 Alberta Iela is a street lined with beautiful art nouveau buildings, many of which were designed by Mikhail Eisenstein, Konstantīns Pēkšēns, and Eižens Laube. It’s a little bit away from some of the main tourist spots, and since the most noteworthy buildings are all along the one street, it’s easy to walk right past unless you know it’s there, especially since Alberta Iela is angled in a direction most people wouldn’t be walking. 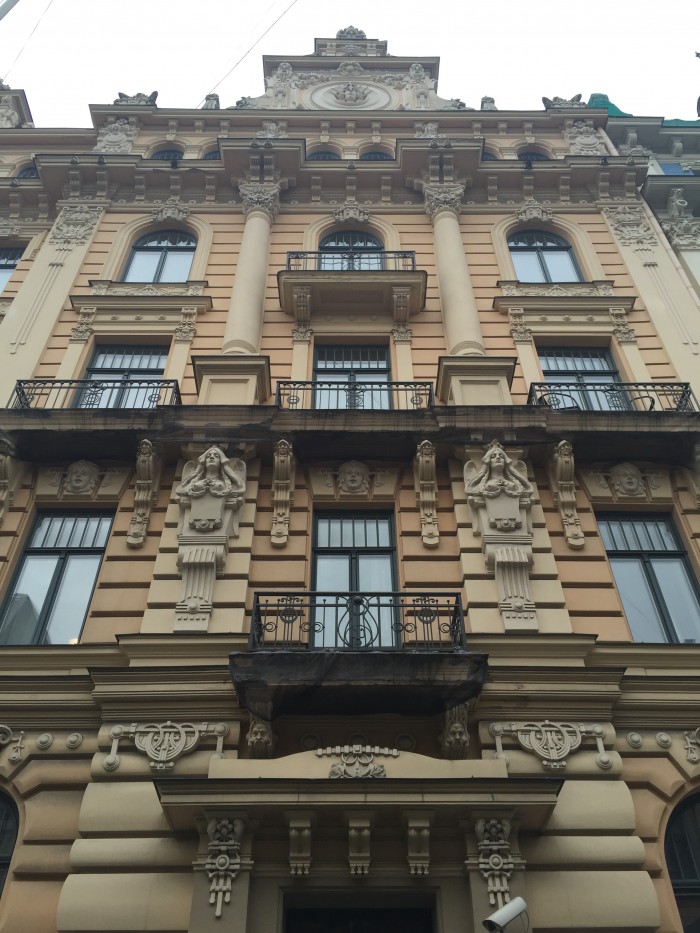 Despite it being slightly off the beaten path, there were several other visitors out taking photos of all of the intricate buildings, which were built in the late 19th & early 20th centuries. Given Riga’s rough history following the time period, it’s remarkable that the street survived intact. 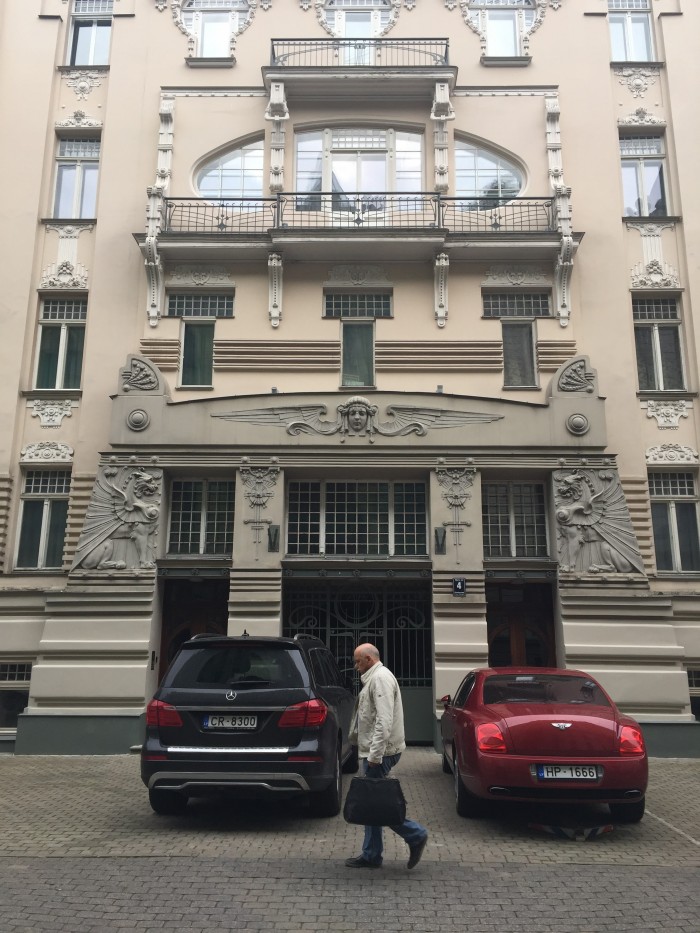 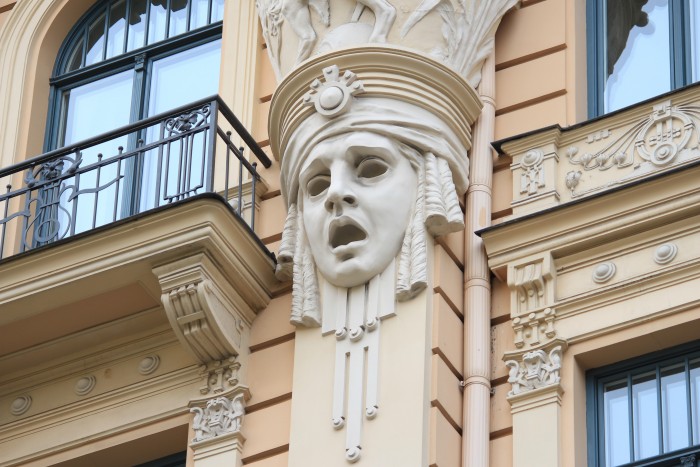 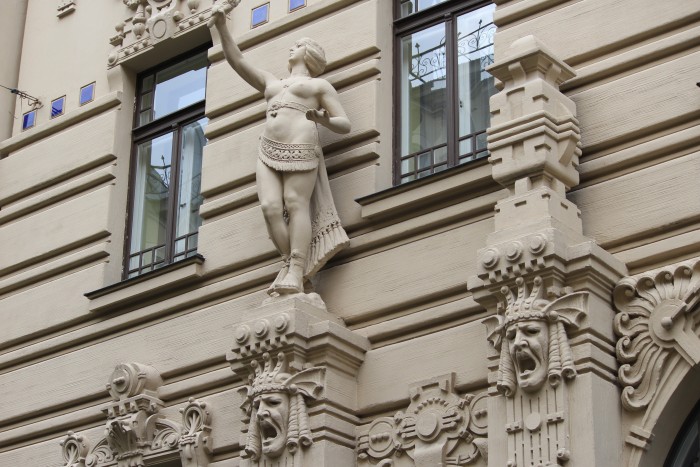 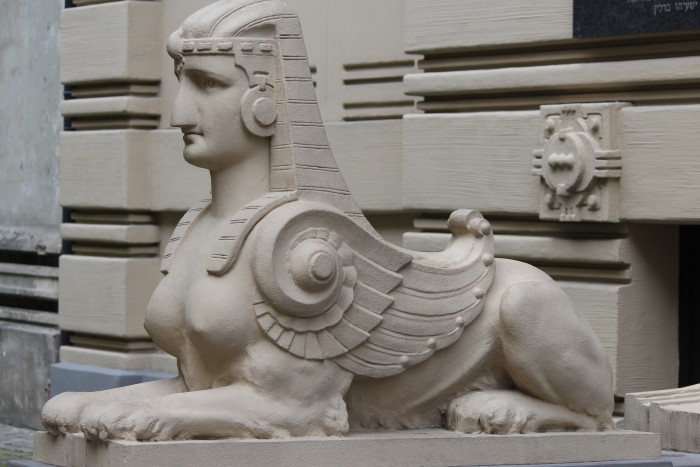 While Riga suffered greatly during the 20th century, it has entered the 21st century as a beautiful city with potential for the future, while not forgetting its past. For more, read about some of Riga’s museums & other historical sites.