Whenever I travel and only have a few days in the city, I usually try to stay as close to the city center as possible. For a couple of reasons, I made a slight exception when I visited Helsinki. IHG’s Point Breaks promotion was including a Holiday Inn property in West Ruoholahti, an area just west of Helsinki’s city center. This meant that room redemptions were only 5,000 IHG Rewards Club points per night, which are worth around $35. This is a great deal for a hotel room, provided you have flexible destination plans or happen to be traveling to a place where a Point Break hotel is being offered, like I was.

Second, relating to the Holiday Inn Helsinki – West Ruoholahti, the location isn’t actually as far from central Helsinki as you might initially think. The city center itself is a fairly small area, and the hotel is just to the west of that, about 2km away, which is walkable if the weather is nice. Otherwise, there is a subway line that starts at Ruoholahti metro station, only about a 5-10 minute walk away from the hotel. From there, the subway runs frequently, and you can be at the central train station in just 3 minutes (2 stops). It’s remarkable just how fast the subway line is, and it really makes staying at the Holiday Inn no issue at all. 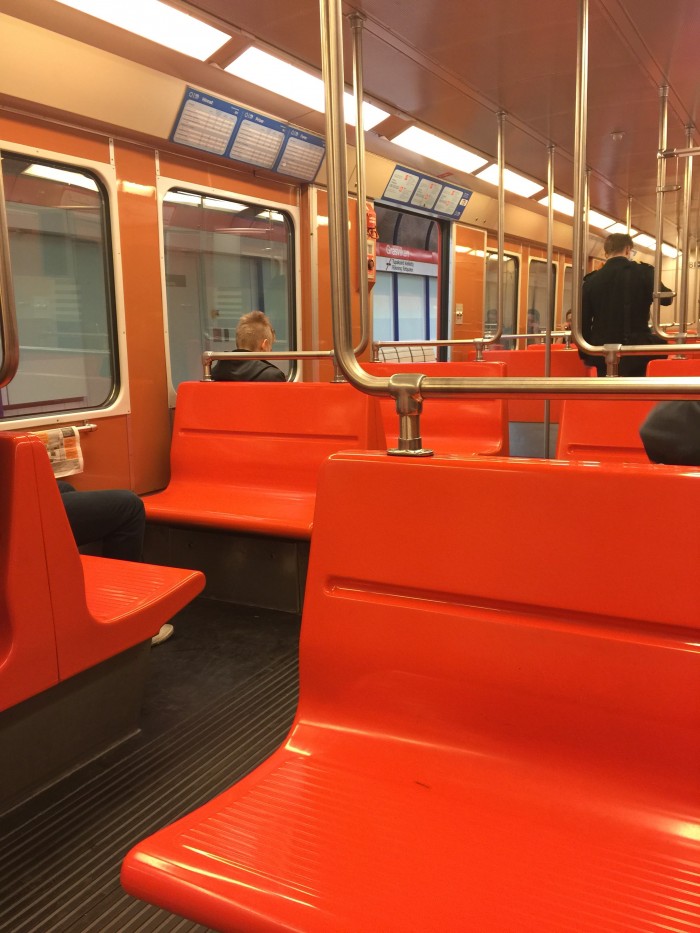 I arrived at West Ruoholahti from the south, as that’s where the Helsinki ferry terminal is. That was easy as well, as all I had to do was make one light rail transfer, then get off right near the metro station. The Holiday Inn was a bit hard to spot at first, since it’s not on the main road, but once I passed by some other buildings, it was much more noticeable. 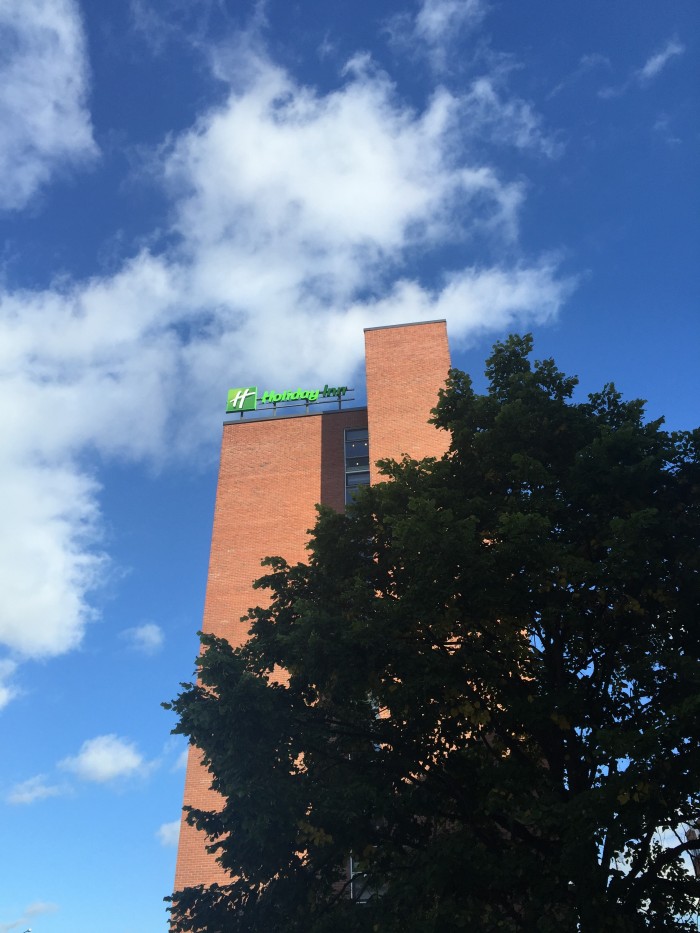 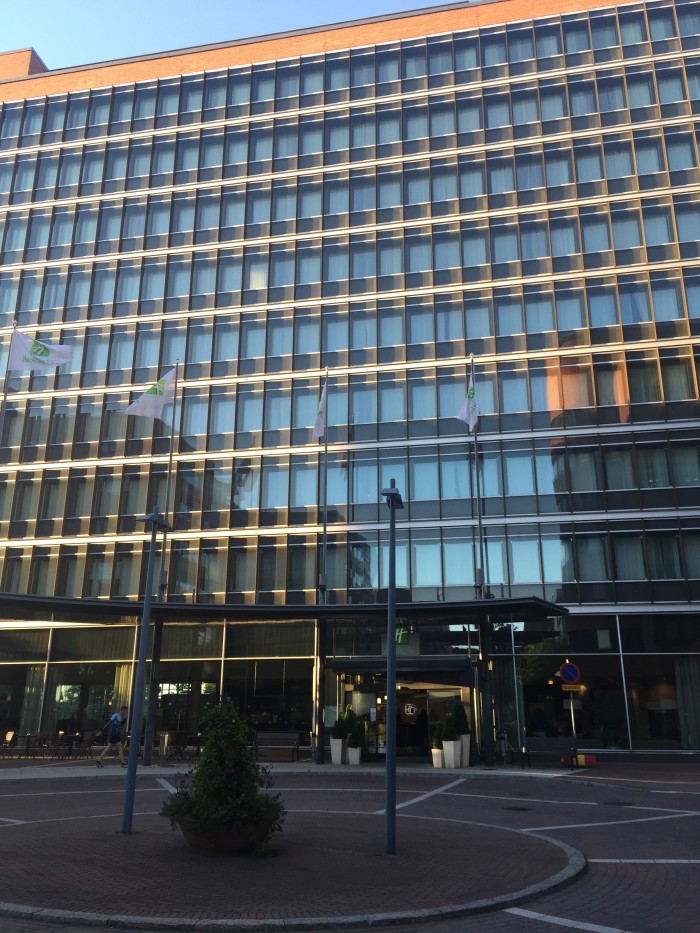 I checked in and was offered premium WiFi for my Spire amenity. IHG really needs to step up their game here, to at least offer a free breakfast or something for their highest level members. I can’t really complain for what I paid for the room, but still, the perks should be better for the program as a whole. 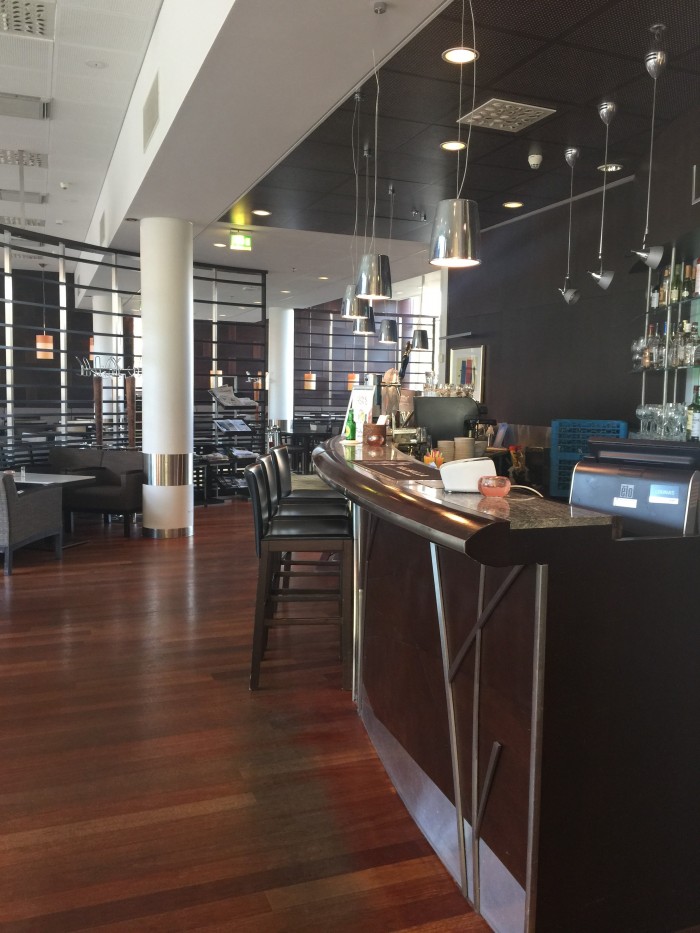 Now let’s get to the room itself. Let’s start with the good. The room was spacious, with a decent desk & sitting area. 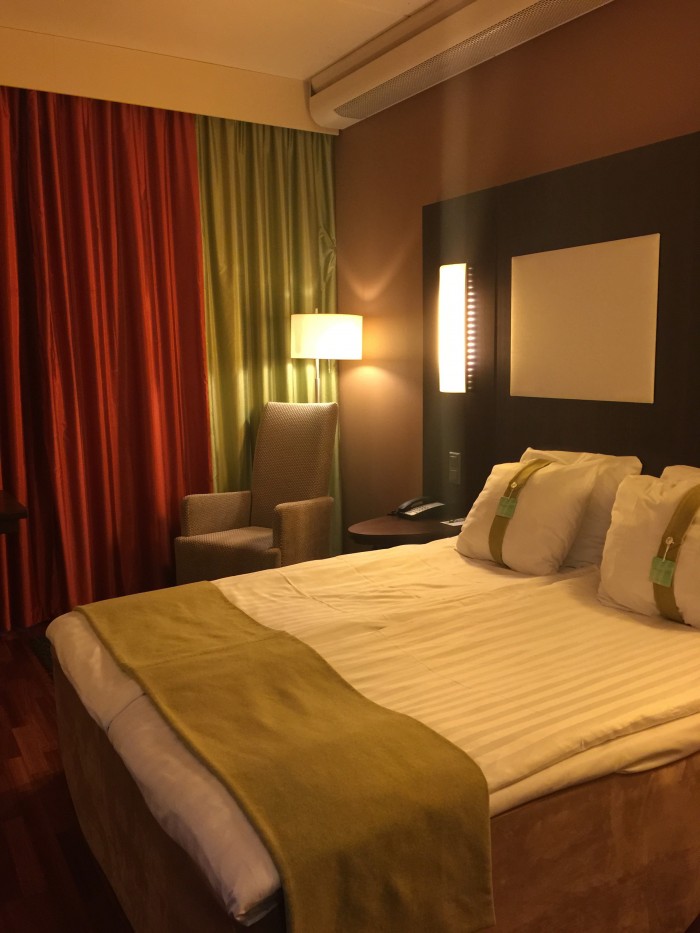 The bed was also pretty comfortable, and the decor, while not particularly original, was inoffensive (hello, Andy Warhol!). 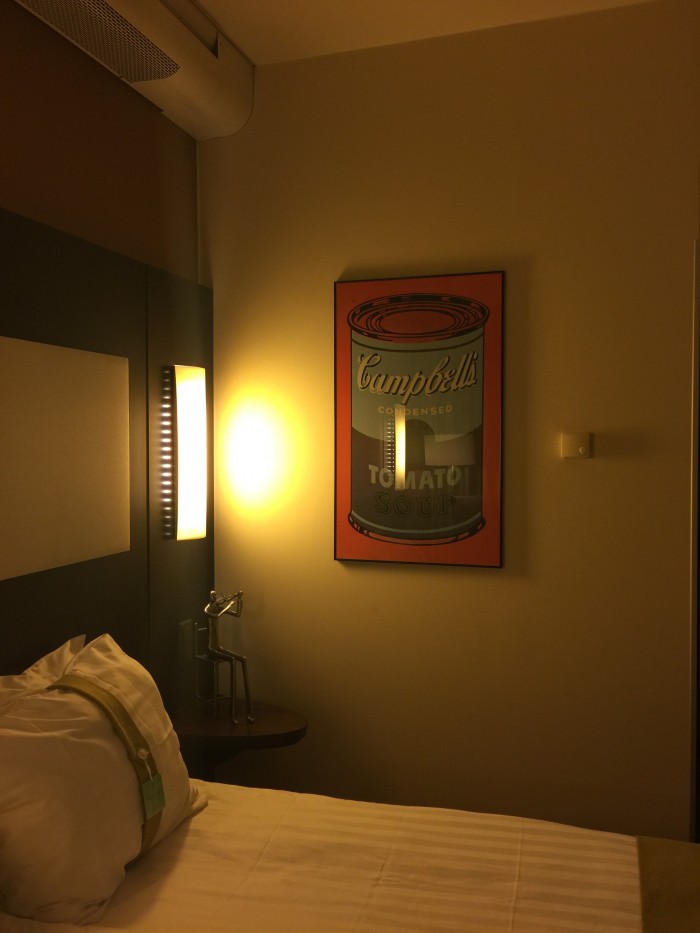 There was a mini fridge, as well as a small TV. 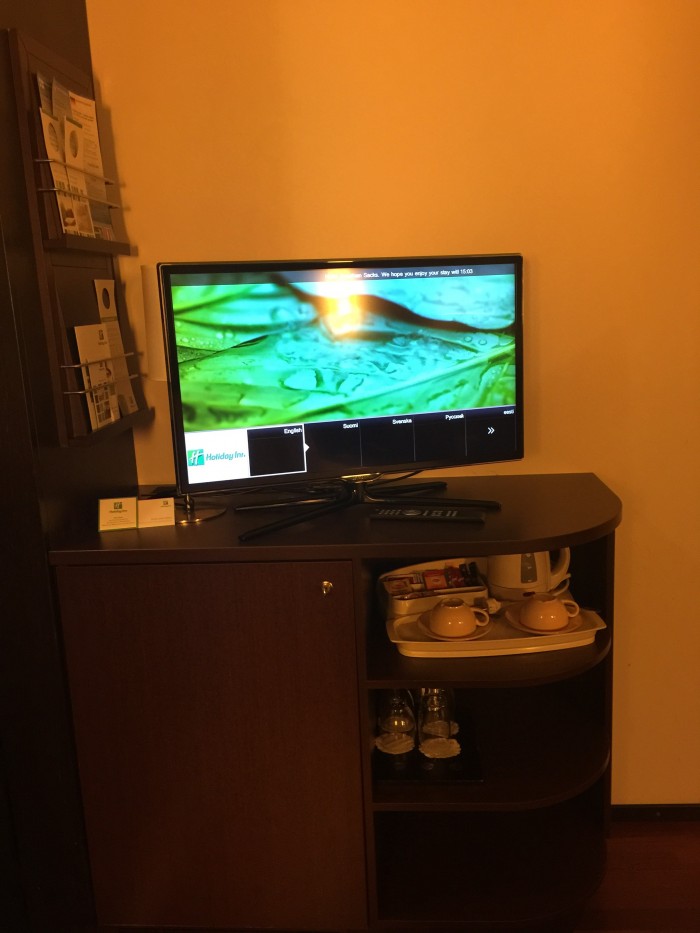 The bathroom was a standard bathroom. 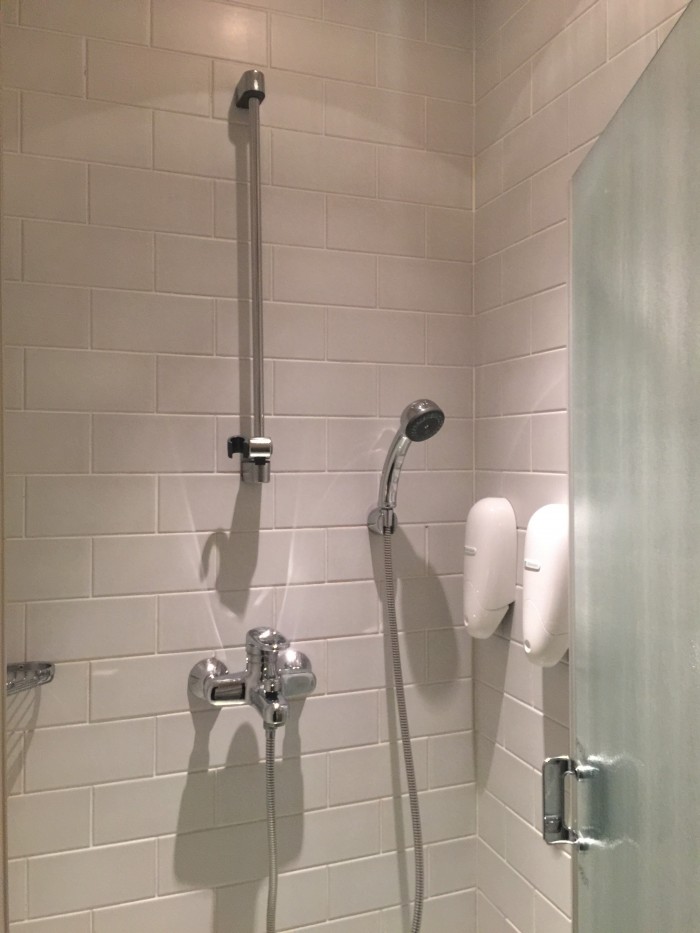 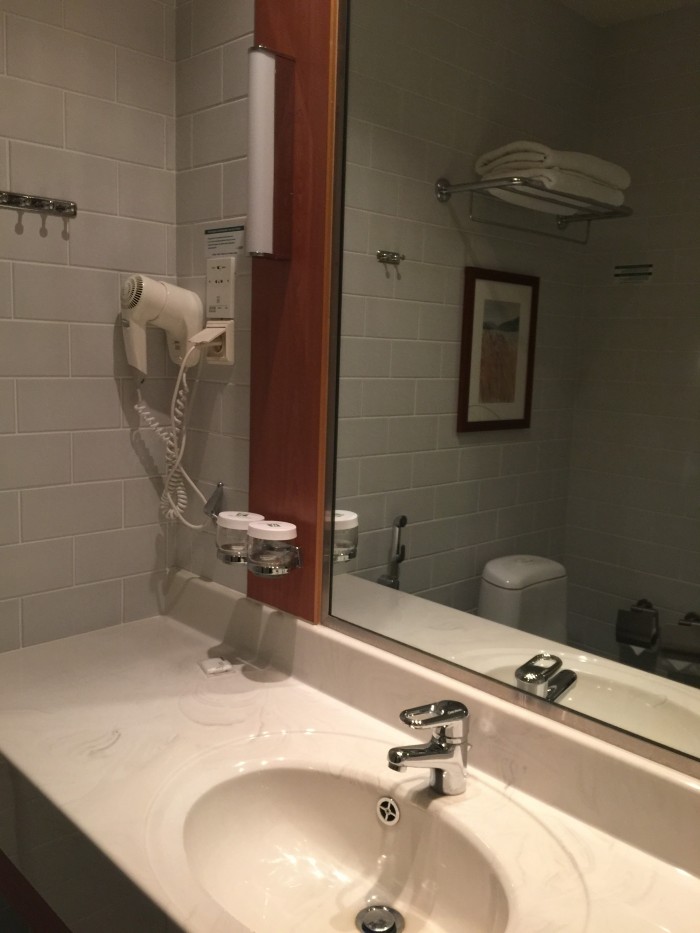 I was on one of the higher floors, so while the view wasn’t amazing, at least it was quiet, not that it’s a particularly busy area in the first place. 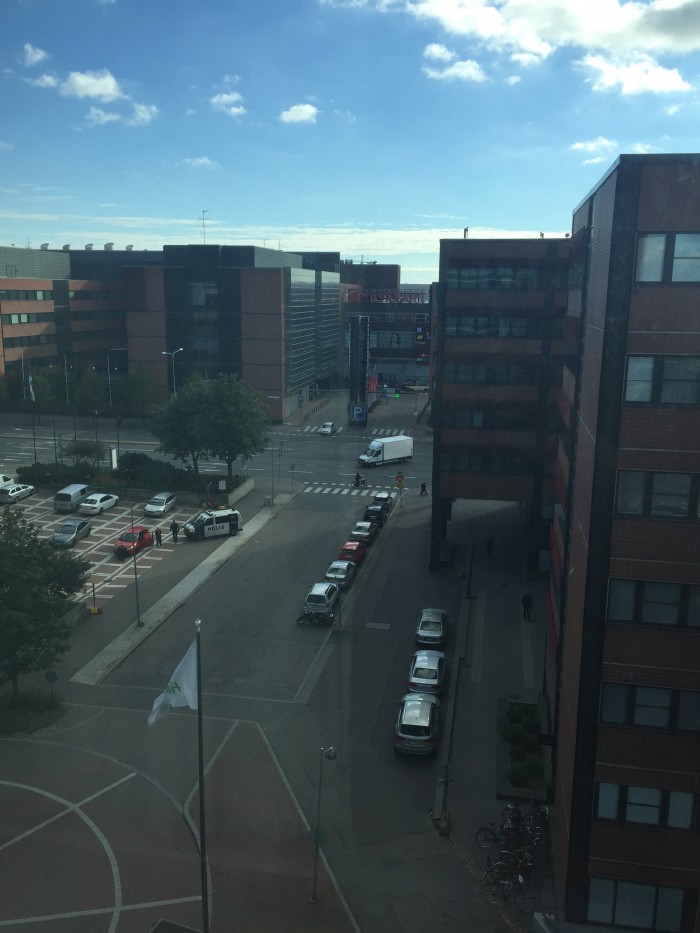 For starters, the electricity in the room was set up in a bizarre way. In order for the power outlet next to the bed to work, the light needed to be on. This is problematic when you want to charge your phone overnight and don’t want a light on. I ended up having to leave my phone across the room in order to sleep in the dark. I know this isn’t a huge deal, but this is a weird setup for a room.

A bigger issue was the lack of working controls for the air conditioning/heating. It was cold in Helsinki, so the heat was on. The problem is that I don’t like a hot room at all. On my first night, it was warm in the room, but not completely unbearable. I mentioned it to the front desk in the morning, and they said they would send someone to fix it that day. I went out all day only to return and find that the room had gotten even hotter. I called the front desk, and to their credit, someone did bring me a large fan right away. It wasn’t perfect, since it added noise to the room, which already had an unexplained humming noise from somewhere, but at least I was able to sleep. I was told that the issues with the AC & heating had occurred before, which made it all the more frustrating that it there wasn’t a better solution. I don’t expect much from the hotels I generally stay in, but I do expect to at least get a comfortable night’s sleep, which this issue made difficult.

I can see why the Holiday Inn Helsinki – West Ruoholahti is available for IHG PointBreaks so frequently, given that most people will think that it’s in a bad location far from the city, and that some who are familiar with the property might not find it to be up to a particularly high standard. That said, for $35 per night, it was still a great deal. Were it not for the temperature issues, I wouldn’t hesitate to stay there again, as long as the price was still low. Overall, the reviews for the property are actually very good, so perhaps my stay was an anomaly.