In my opinion, Barcelona is one of the coolest cities in the world. There’s just a great creative energy to the city. This vibe manifests itself in various ways, making Barcelona one of the greatest cultural hubs in the world. One of the highlights of the city’s art scene is the Museu d’Art Contemporani de Barcelona (MACBA).

The Museu d’Art Contemporani de Barcelona is part of a larger cultural complex in central Barcelona, near the Universitat de Barcelona. Since 1995, MACBA has showcased contemporary art from around the world. 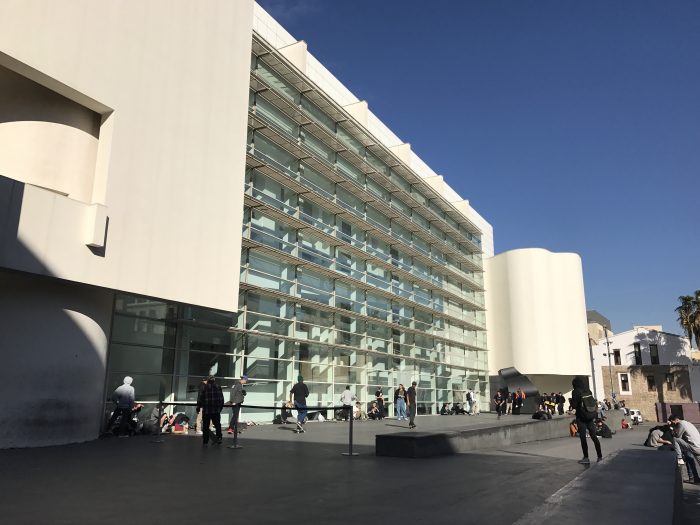 The exhibitions of MACBA start before you even enter the building. On the plaza outside, there are a couple of famous murals.

The first is Keith Haring’s Todos juntos podemos parar el SIDA (Together We Can Stop AIDS). You can read more about the history of the piece here. 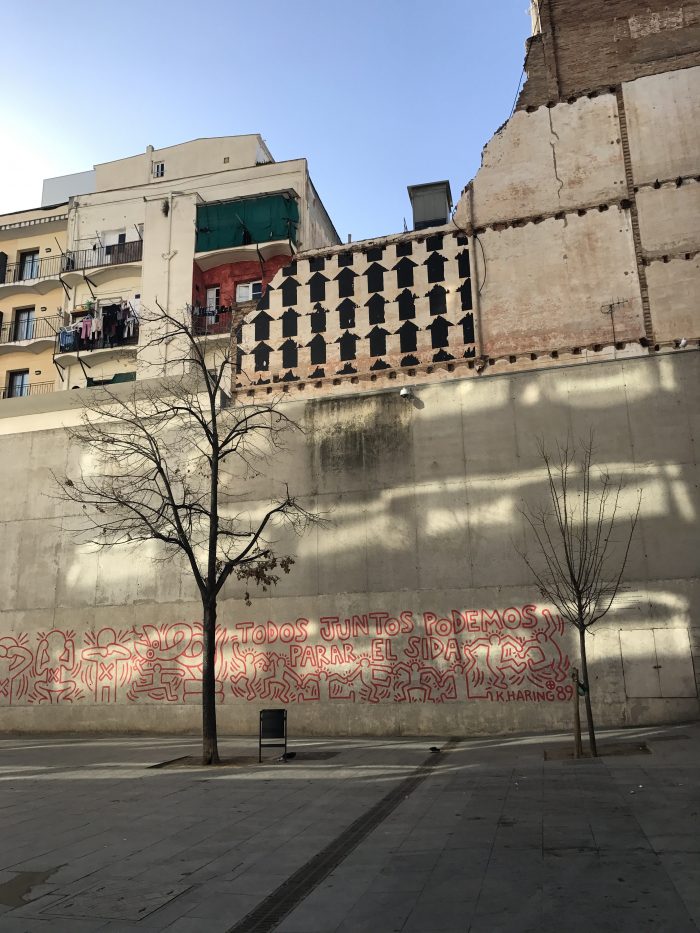 The other is Barcelona, Mural G-333 by Eduardo Chillida, which helps integrate the museum into the surrounding neighborhood. 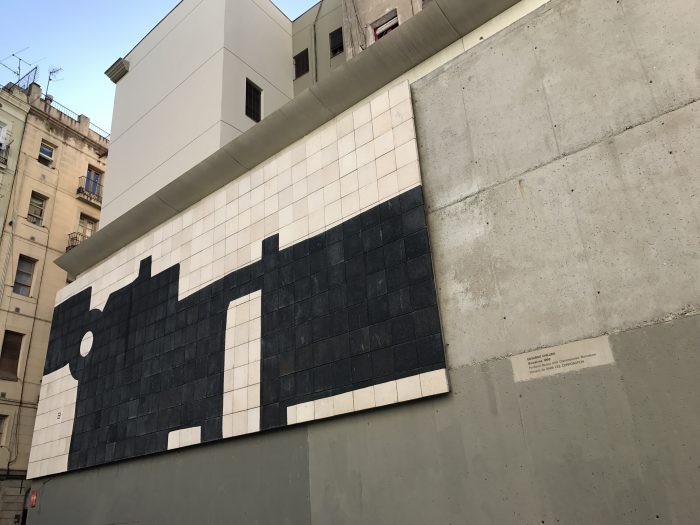 If you’ve passed by MACBA on the other side, it’s impossible to miss the large neon elephant inside. 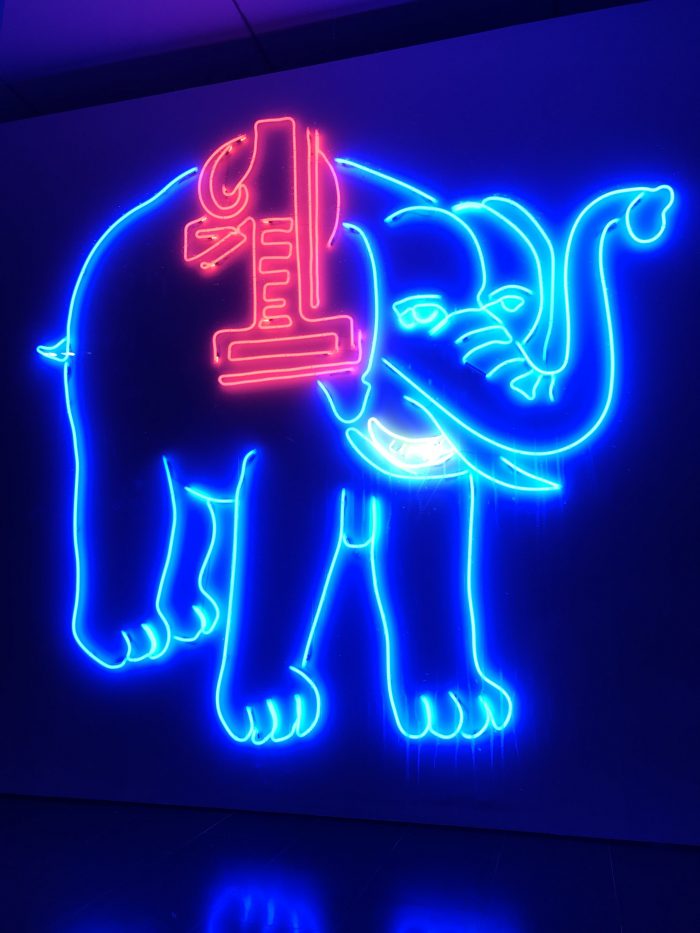 Just outside the MACBA entrance, skateboarders have taken over a large portion of the plaza. It’s great that they haven’t been chased away like they would be in a lot of places, and in fact the patio is even roped off for them so people don’t accidentally wander in.

Entry to the Museu d’Art Contemporani de Barcelona is €10. That’s a bit on the steep side for some, which might help explain why the museum was rather empty when I visited. That said, there is a €15 annual pass that would be more useful to locals who can visit the rotating exhibitions throughout the year.

I began my MACBA visit on the top floor. The white atrium had this written on one wall: 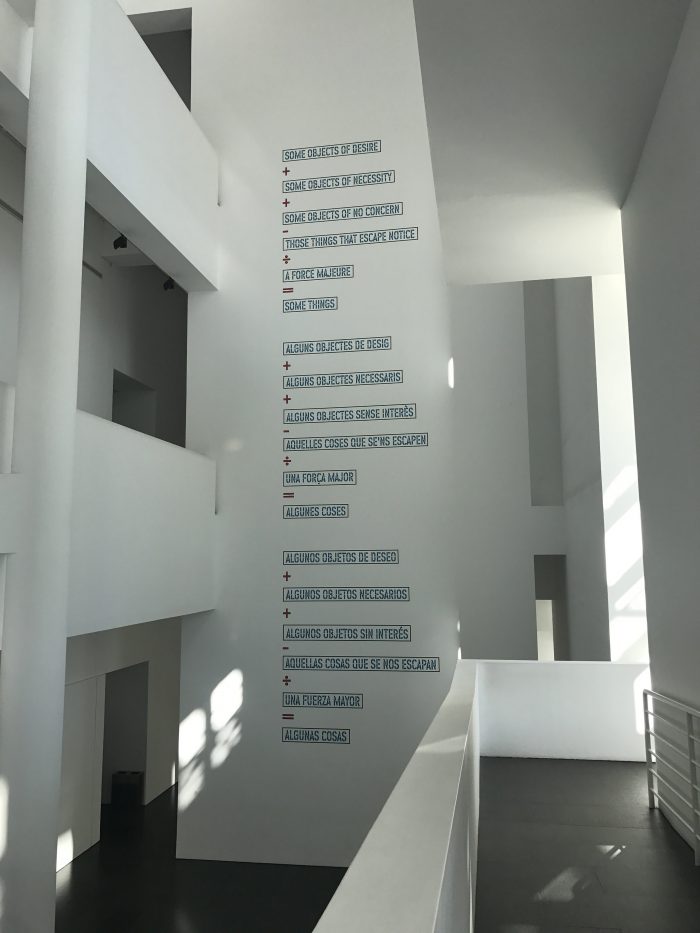 The exhibitions inside MACBA are constantly rotating, of course, but here are the highlights of what I saw when I was there in January 2017.

The top floor was dedicated to a series of works from Spanish artist Antoni Miralda titled “MIRALDA MADEINUSA”. All of the works were from his time in the United States.

Most of the pieces had to do with food, which is entirely appropriate for time spent in America.

At the entrance was “Food Situation For A Patriotic Banquet”, which was a sort of United Nations of dinner plates made with rice, then left to get moldy & decompose. 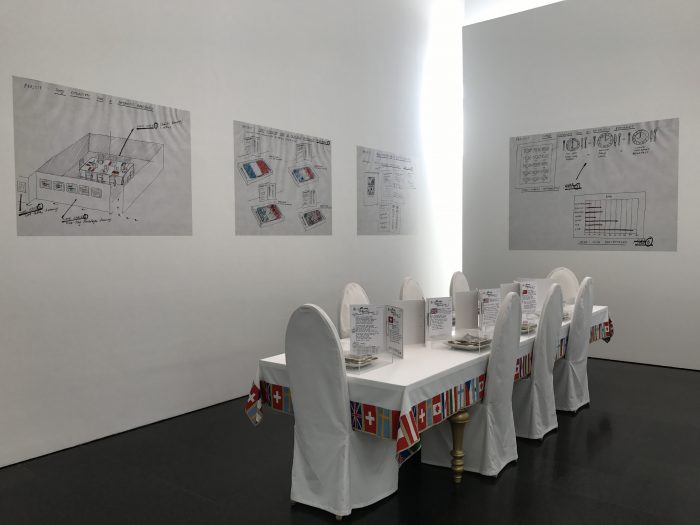 Another highlight was “Wheat and Steak”, first shown as a parade in Kansas City. 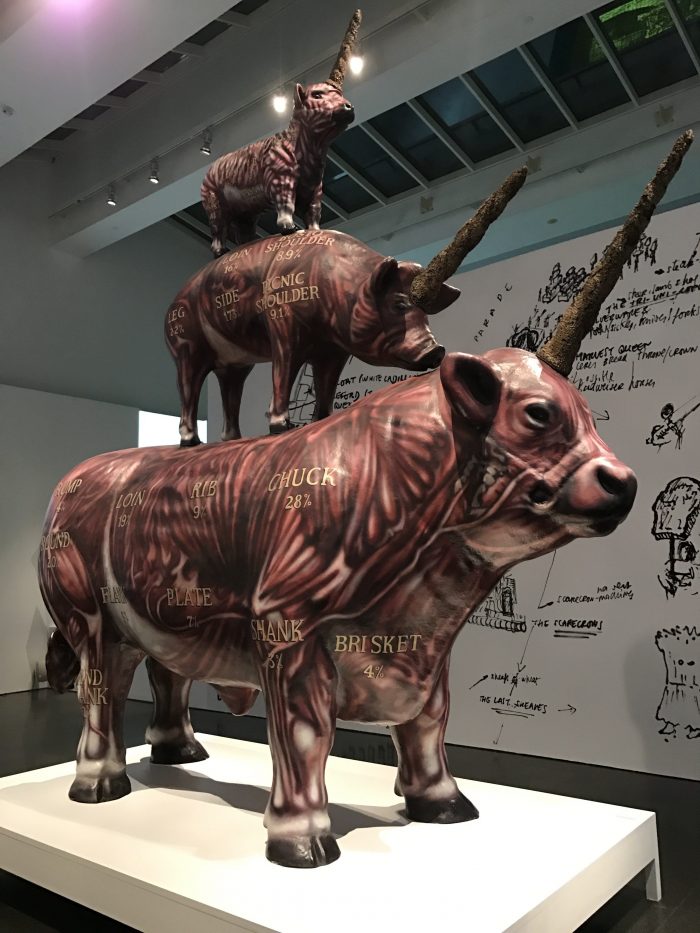 The final room was a recreation of El Internacional Tapas Bar & Restaurant, which was a combination art installation & restaurant that introduced tapas to New York City. On Fridays, you could actually visit the exhibition to have a cocktail & tapas. 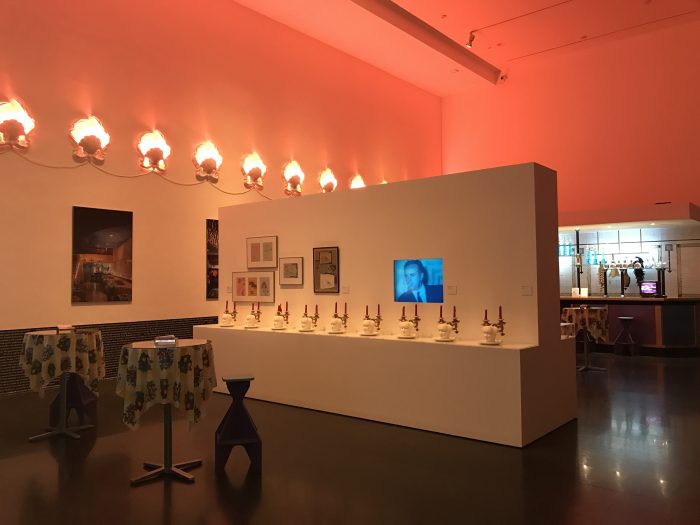 The next space on the floor below was called “Collection MACBA 31”. This area was particularly fascinating, as it was highly interactive & contained several large pieces. The idea was to force people to interact with three core concepts: experience, time, and conflict. One piece had a freezer where you took a bag of ice cubes, put them into your mouth, and then went into a tunnel with some interesting visuals. I didn’t necessarily get it all, but I liked that someone was doing something different. 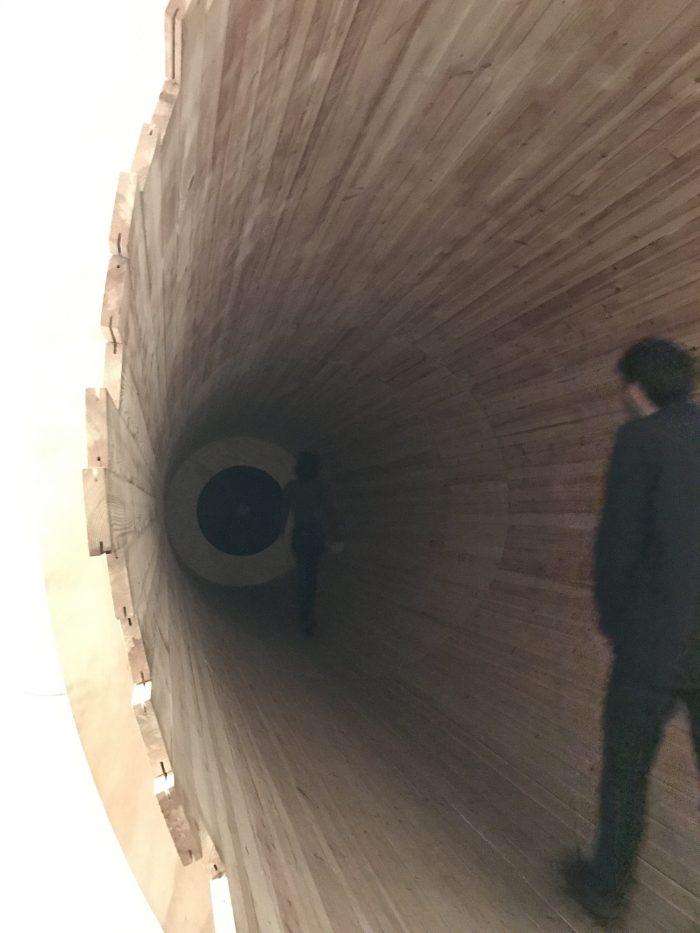 Also on this floor was Krzysztof Wodiczko’s “If You See Something…”. The concept of this post-9/11 work is to detail the forgotten stories of several immigrants, seen as shadows, who have had to deal with some hardship or another when it comes to their freedom. It’s a powerful work that merits a full viewing. 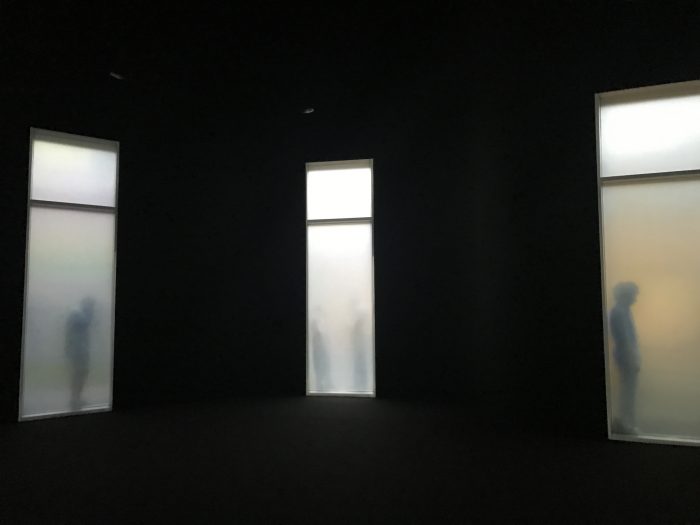 The final section of MACBA I visited was called “Gelatina Dura” & related to Spain during the 1980s. The concept of the space was more of a factual display than what one might consider to be art, but the idea behind it was interesting. It was a review of how prominent politicians who were involved with fascism suffered no consequences. Sadly, it’s a chilling study for the future. 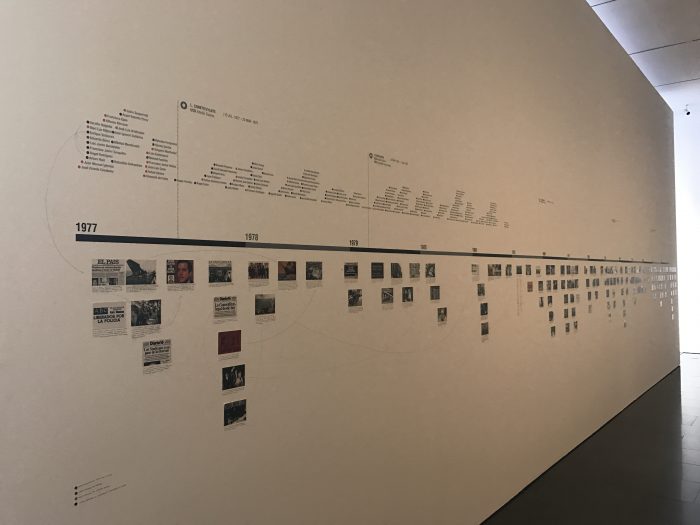 After my visit to the museum, I was hungry for a late lunch. I found an excellent empanada place right around the corner. It’s called Muns, and I highly recommend it if you’re looking for a place to eat near MACBA. 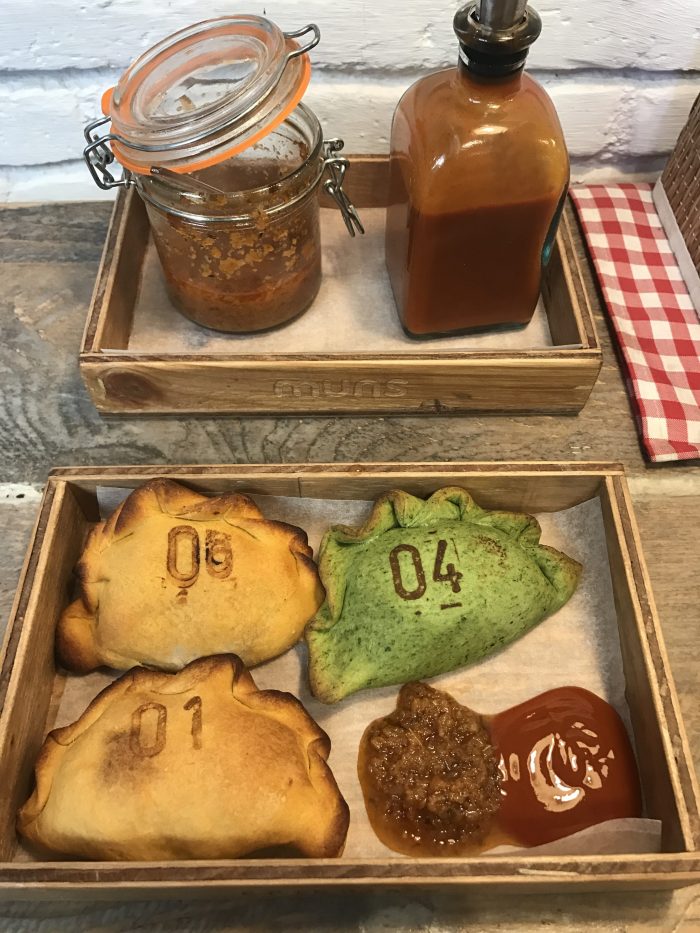 Barcelona has a rich tradition of art that is constantly evolving. If you’re interested in seeing the latest contemporary art in Barcelona, be sure to visit MACBA.