Yokohama is just a short ride away from Tokyo by train, but being the second largest city in Japan, it also has a nightlife scene worthy of your attention. As Japan opened for trade, Yokohama grew as a port. Thanks to its ties to foreign trade, it was the first place where beer was brewed in Japan. This brewery, which started as Spring Valley Brewery in 1869, would eventually become the massive Kirin brewery, who then came full circle by resurrecting that name as their craft beer arm. Most of the craft beer bars & breweries in Yokohama are centrally located along the stretch of the city from Yokohama to Kannai stations, though there are a few other spots scattered around the city. Here’s my guide on where to find the best craft beer in Yokohama, including breweries, tap rooms, beer bars, and bottle shops.

The best breweries in Yokohama

We’ll start with TDM 1874 Brewery, a nice little brewery & bottle shop that is located on the outskirts of Yokohama near Tokaichiba. This suburban brewery is an offshoot of the main liquor store, which has a large selection of sake, wine, & cider in addition to a large selection of American craft beer. 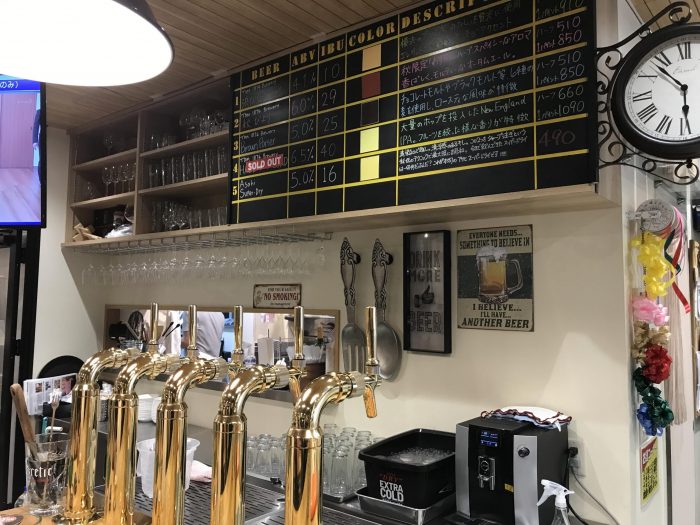 This neighborhood bar has a handful of taps of their beer, which mainly initially focused on traditional styles, but is now branching out a bit. My first beer at TDM 1874 was a local pear gose, which I paired with gyoza for purely poetic reasons. 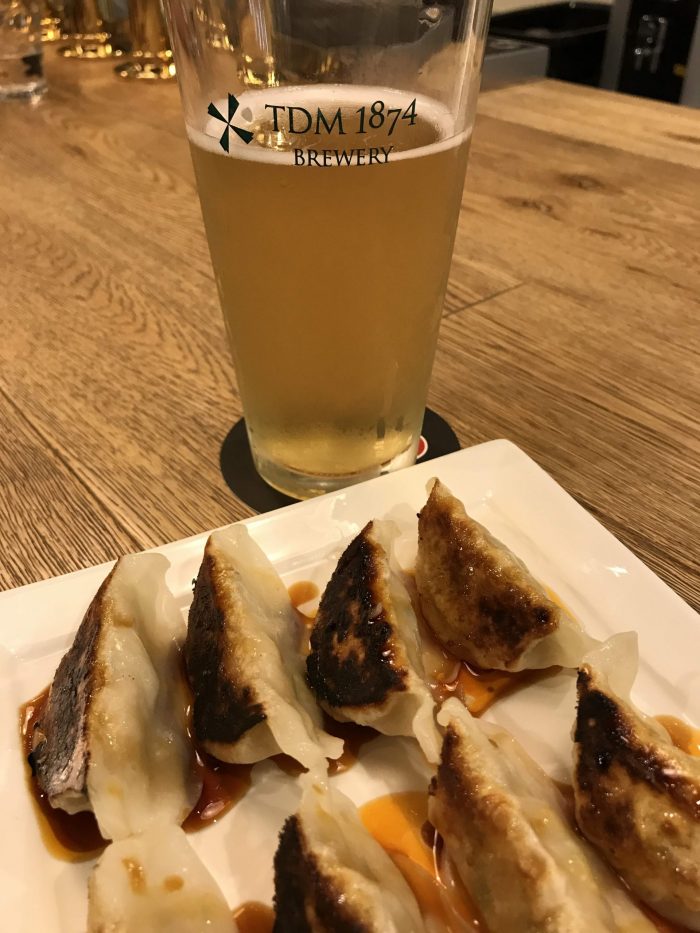 While watching the Fukuoka SoftBank Hawks play in the Nippon Series on the television above the bar, I immediately bonded with Hiro, a local who helped me translate part of the menu. He’d lived in Germany & learned English in pubs. We discussed how we both had been to Oktoberfest in Munich, and he said “holy smokes!” when I told him I’d had 105 bowls of wanko soba in Morioka the previous week. Hiro also introduced me to George, the British brewmaster of TDM 1874.

It’s a cool small neighborhood hangout & brewery. While it might not be centrally located, it’s still easy to get to by train, especially if you’ve got time on your JR Rail Pass.

Thrash Zone is a brewery & craft beer bar that also plays metal. If you know me, then you already know I that I love it. 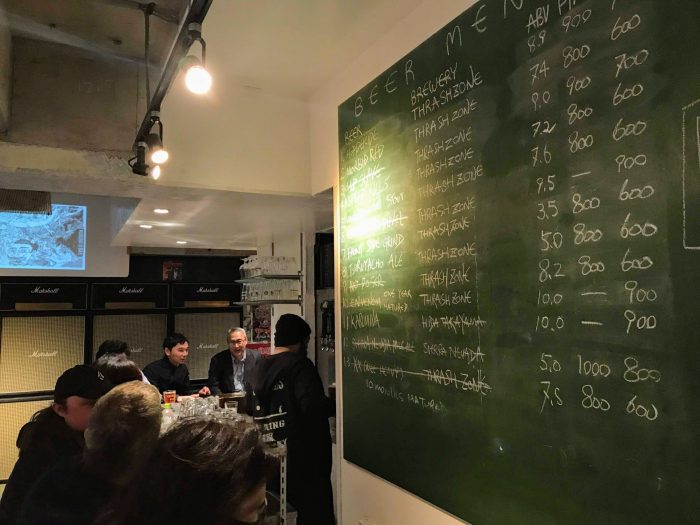 The guitar & music-themed bar has 13 taps, including a couple of guests, all served in the sort of industrial-looking place you’d expect from bartenders who look the part. The beer selection generally leans towards higher ABV, hoppy IPAs that are stronger than what you typically see in Japan.

Thrash Zone also used to operate an amazing bar called Thrash Zone Meatballs that combined all of the above with meatballs, but Yokohama was apparently not ready for the magic combination of metal, beer, & meatballs. It’s a tragic loss. 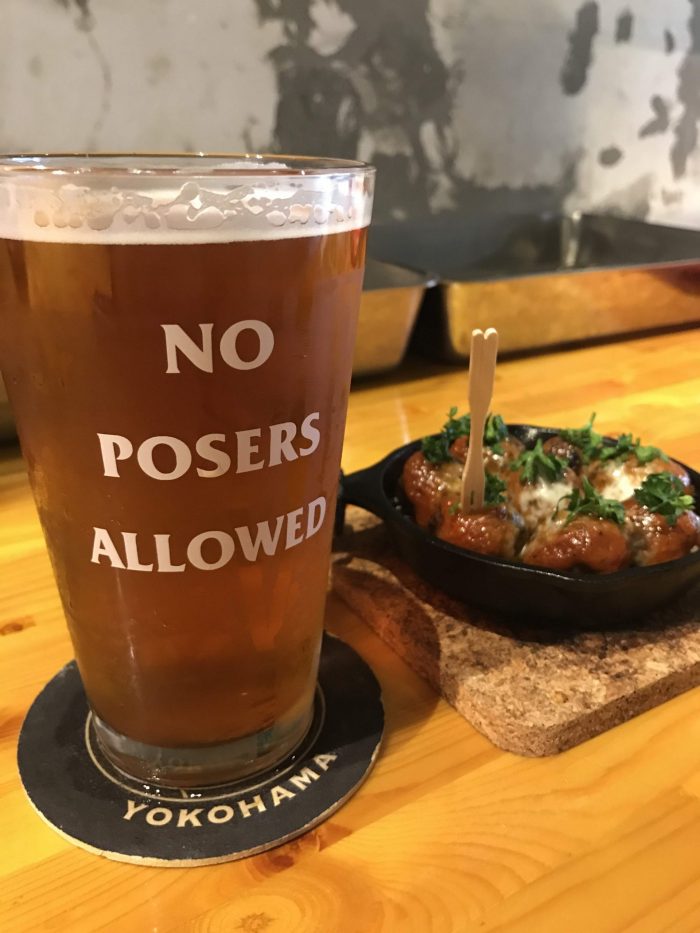 There are two breweries with similar names located just a few blocks away from each other near Kannai. Yokohama Brewery is the older of the two, with over 20 years of brewing experience. 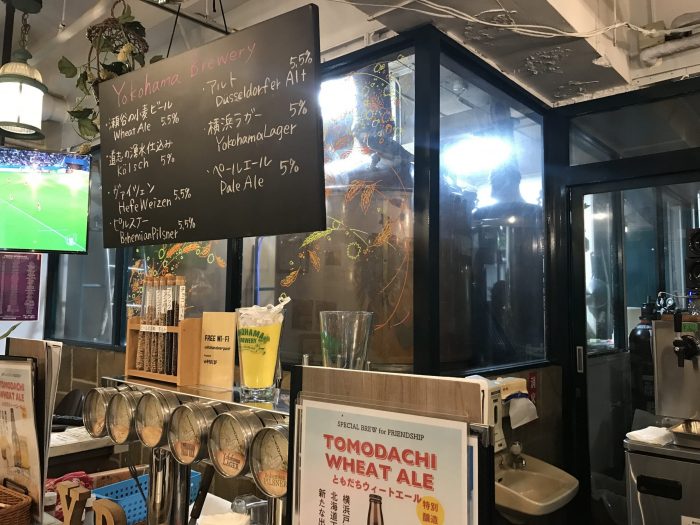 Yokohama Brewery has a strong German influence in their beer lineup. The brightly-lit bar has 8 taps & a lively atmosphere that included pop punk music during my visit.

Yokohama Bay Brewing Company is also centrally located in Yokohama. The brewery has a broader beer lineup, with 14 taps that cover English to German to American styles. While most of the beers available are their own, they also offer Pilsner Urquell & Hoegaarden.

The selection of Japanese snacks like sashimi & sausage at Yokohama Bay pairs perfectly with their beer, & the atmosphere is relaxed, with blues playing on the stereo. They also have another location in Totsuka. 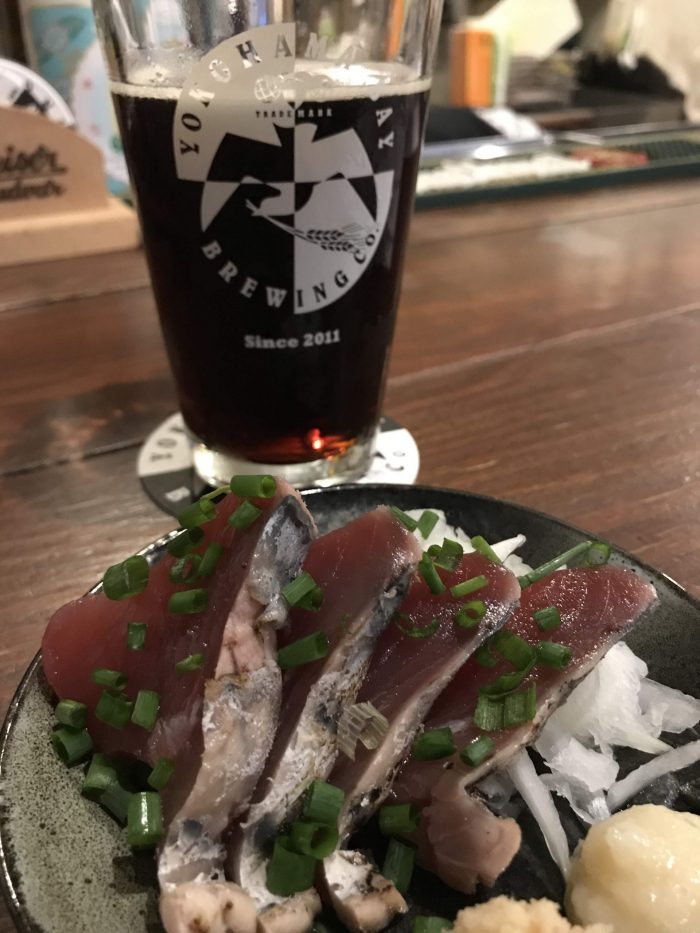 254Beer / 29 BY is a great brewery & yakitori restaurant located just around the corner from Yokohama Bay Brewing Company. While the name is a bit confusing, the great combination of beer & yakitori is not. 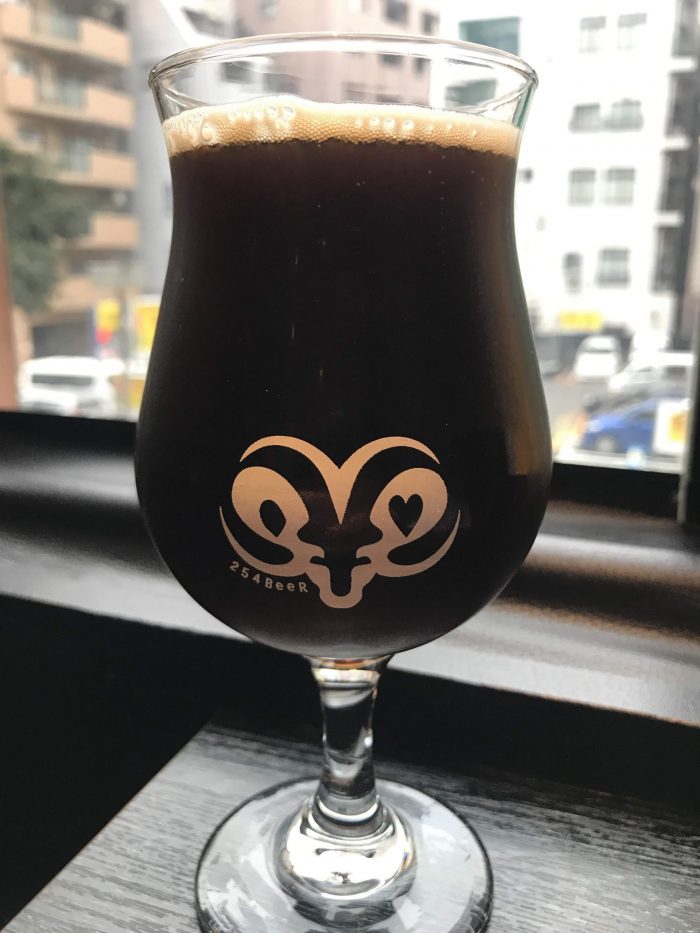 Baird Brewing is a stalwart in the Japanese brewing scene. Since their founding in 2000, they have become one of the best known craft breweries in Japan.

While Baird brews their beer in Izu, which is just past beautiful Hakone to the southwest of Yokohama, they operate a few tap rooms around central Japan, including one near Kannai on the same street as Yokohama Brewery. There is also a Baird bar in Harajuku in Tokyo.

Baird’s Bashamichi Taproom features an expansive 25 taps of their own beer, which are helpfully available in flights of 3 so you can try as many as you’d like. 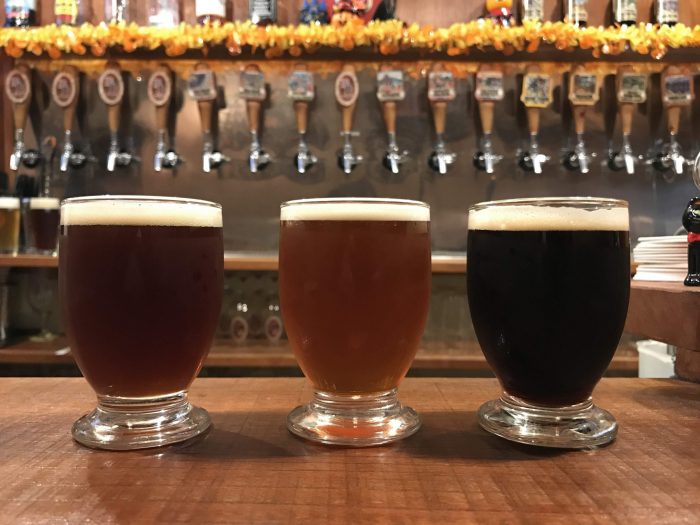 The food menu focuses on low & slow American-style BBQ. I had a couple of seasonal beers: Yabai Yabai Strong Scotch Ale & Country Girl Kabocha Ale, a pumpkin beer. I also had some bacon & eggs, because why not?

Brewpub Ergo Bilamus is the home of Spica Brewing, one of the newer nanobreweries in Yokohama. In addition to a small selection of their own beers, they also have taps from other Japanese breweries & Europe.

Roto Brewery is a small brewery that’s located inside a ramen shop on the outskirts of Yokohama. Beer & ramen is always a great combination.

Craft beer & coffee Sakura Taps is a tiny bar, but inside you’ll find some of the best craft beer in Japan. In a bar so small, there’s only room for 8 taps. However, the beer selection is meticulous, with small breweries from all over the country represented. When I visited, there were a couple of taps from Hokkaido’s Noboribetsu (Oni Densetsu) brewery, as well as one from Aomori’s Be Easy. 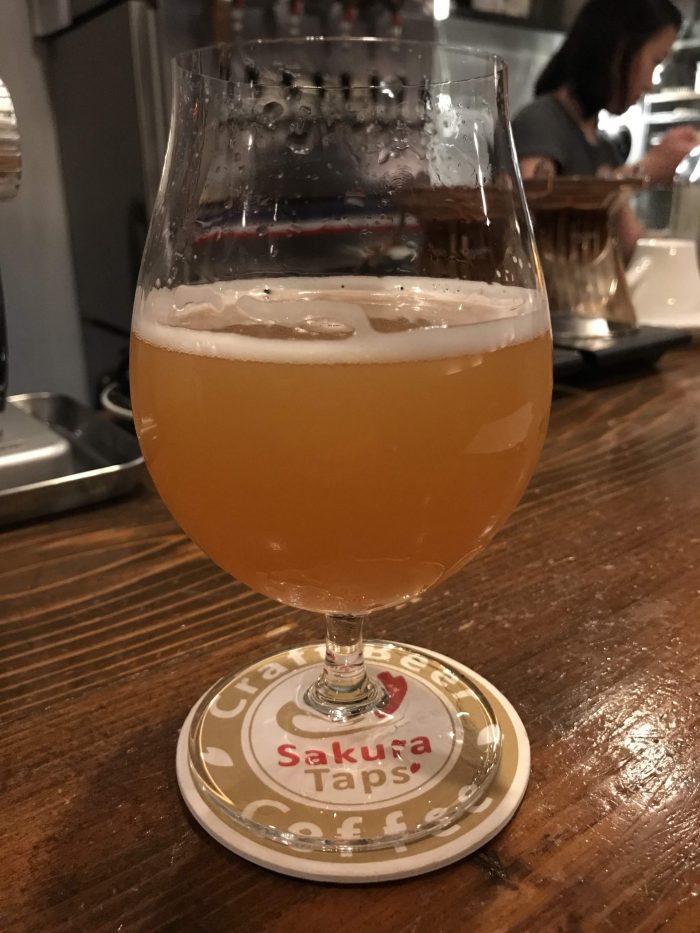 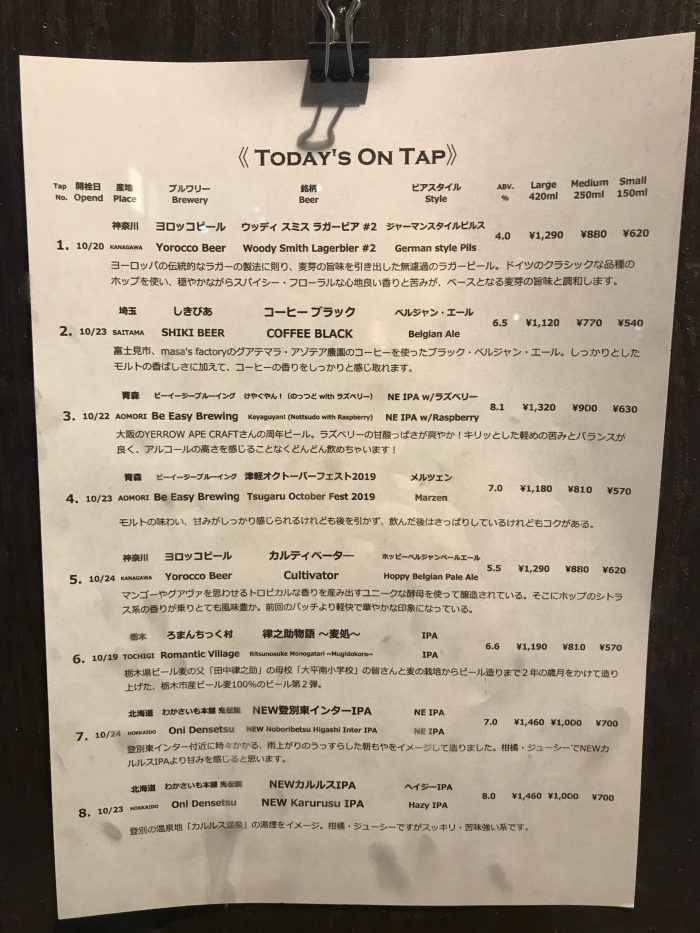 The atmosphere at Sakura Taps matches the intimate space. With only 4 small tables, most of the space is standing, while mellow indie folk music plays. Standing is a nice change, as it allows for conversation. As I enjoyed my beer, I chatted with one of the writers from Japan Beer Times who happened to be there. Sakura Taps is in a busy nightlife area, but it still manages to feel like a neighborhood pub.

Synchronicity is located just around the corner from Sakura Taps in Nogecho. The bar is very popular with foreign visitors, but this may have been partially due to the Rugby World Cup taking place in Yokohama. After a couple of attempts to visit, I was finally able to secure a seat. The bar is intimate but friendly, as nearly everyone there was cross-talking with each other, no matter where they were from. I struck up a conversation with a couple of South Africans as well as some Japanese locals while we all enjoyed 80s music. 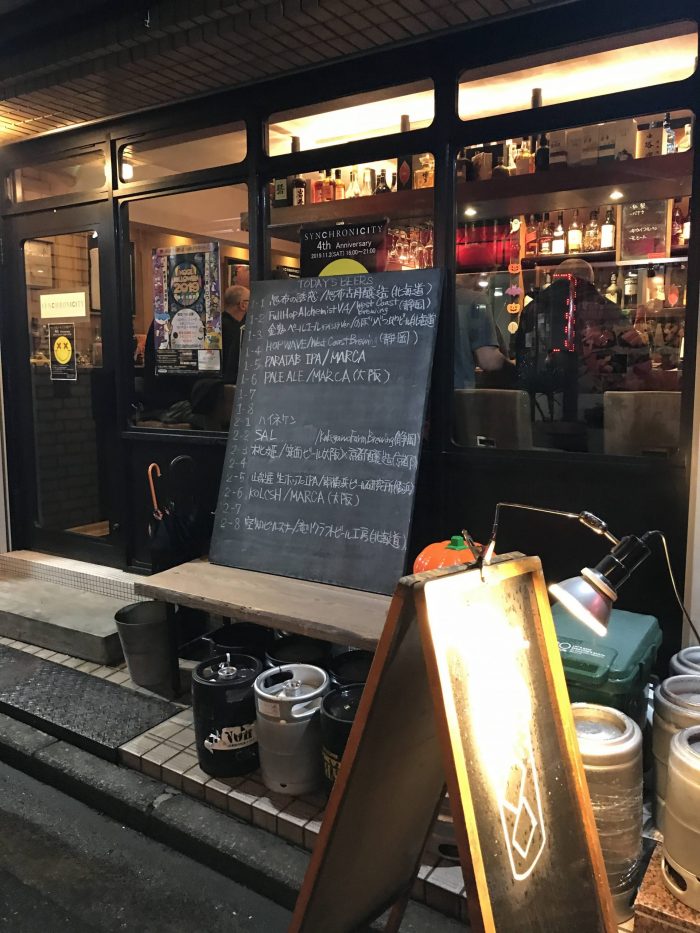 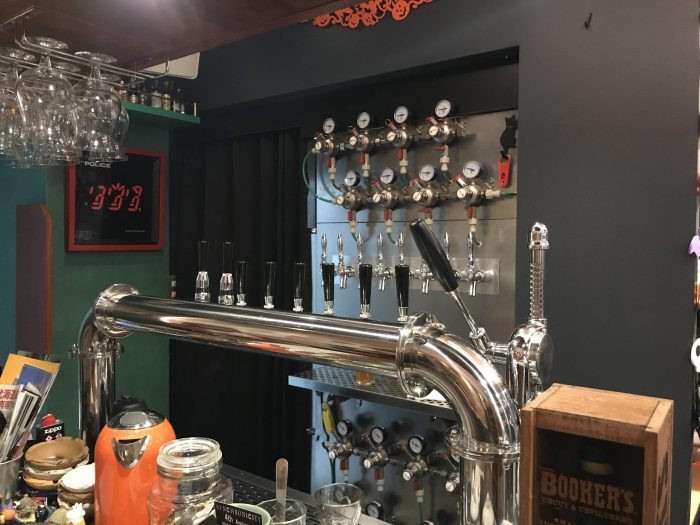 Synchronicity has a good selection of 16 taps. There’s a nice whisky selection too. Thanks to all the rugby fans, several taps had run dry before I ordered, & more ran out while I was there), but that’s likely not an issue during normal times.

From the outside, Noge West End looks like every other bar or restaurant in the Nogecho area of Yokohama, which is famous for its nightlife.

Unlike most of the izakayas & other restaurants, Noge West End has craft beer too, with a selection of 6 taps available. The food is generally veggie focused, with fresh ingredients, but there are also mussels, oysters, & meats available too. The beer may be pricier than other spots, but it’s a good place to go if you’re looking for a nice meal as well. 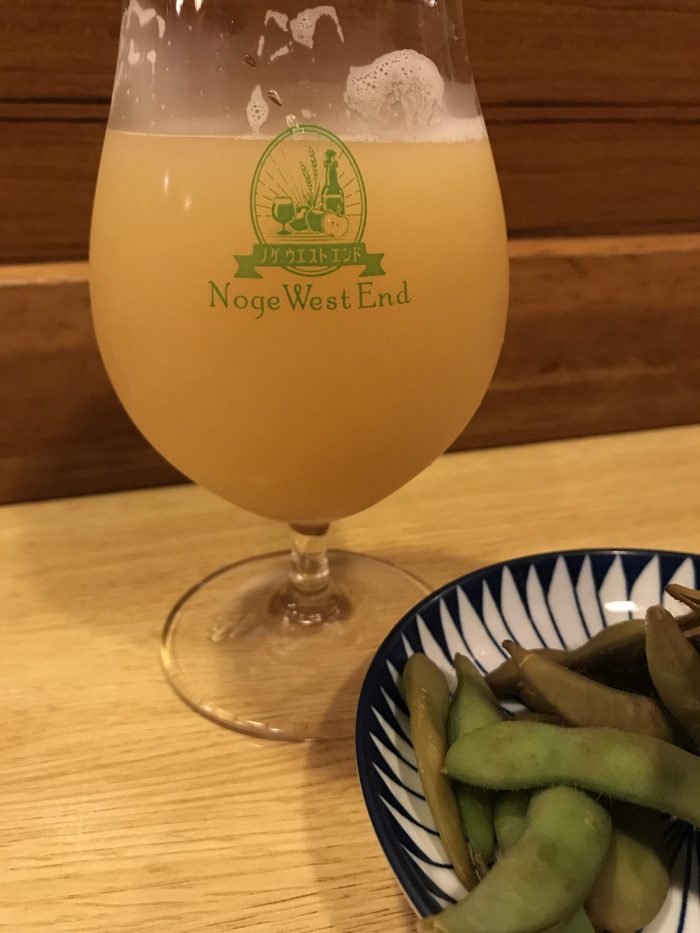 Living Craft Beer Bar has 12 taps of Japanese craft beer, along with karaage, pizza, & other snacks. The music was best described as “familiar” if you’re from a particular generation, as it started with 80s pop & r&b, then 80s & 90s rap, then veered into Hootie & The Blowfish & the Beastie Boys. 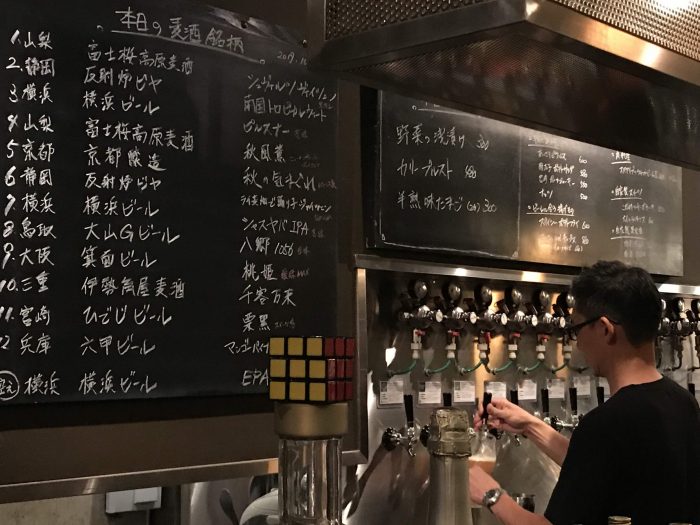 It was here that I first found the Yokohama Craft Beer Map, which does a great job of showcasing all of the local breweries & beer bars. Be on the lookout for it at various locations around Yokohama.

Brunton’s is a relaxed upstairs bar located in Motomachi, a quieter area of Yokohama. Scott, the owner, is happy to chat about beer, whether it’s about his selection of 6 taps and import bottles from places like Scotland, Ireland, Canada, & Mexico or the Japanese craft beer scene in general. A vegetarian & vegan-friendly food menu is also available. 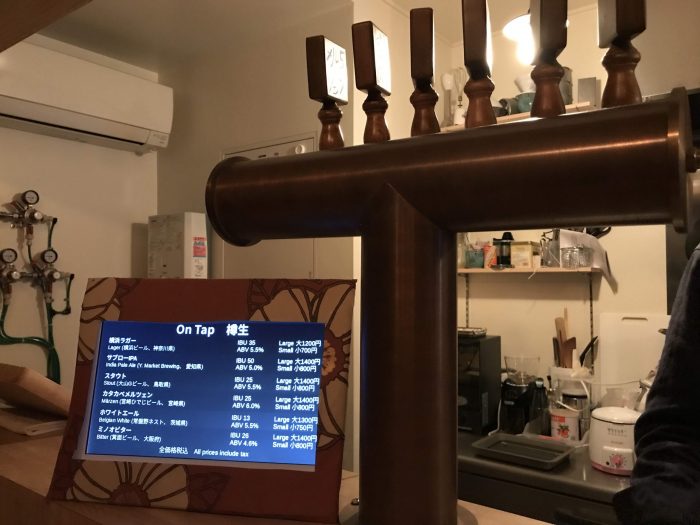 The bar also helped me learn a bit of local history, as Brunton’s is named after Richard Henry Brunton, a Scottish engineer who came to Japan to design lighthouses and helped plan Yokohama.

Craftsman is part of a small Japanese bar chain that serves Mexican & Italian food. Their 31 taps plus over 100 bottles makes for one of the largest beer selections in Yokohama, with the beer being a mix of Japanese, American, & British. The bar was packed on a Thursday evening, so it’s a popular place, partially due to its close location to Yokohama station. 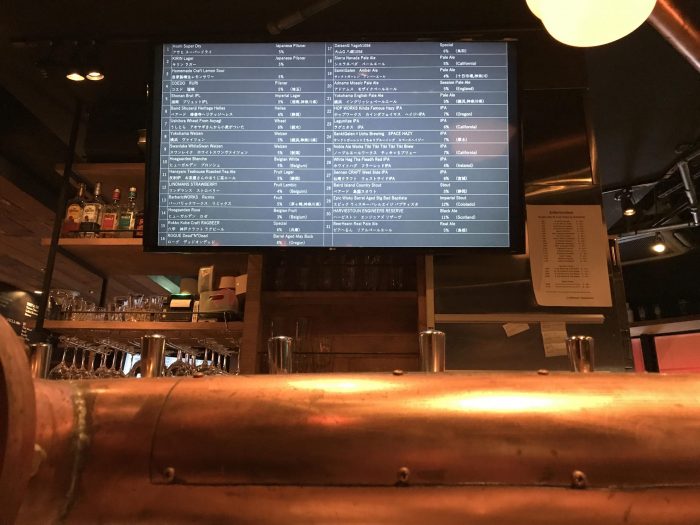 Antenna America has a couple of locations Yokohama, including one in Kannai, and one at Yokohama station. They also have a beer bar & bottle shop in Tokyo. The Yokohama station location is located down in the basement far below. Look for the Food & Time Isetan Food Court, and perhaps that will help. 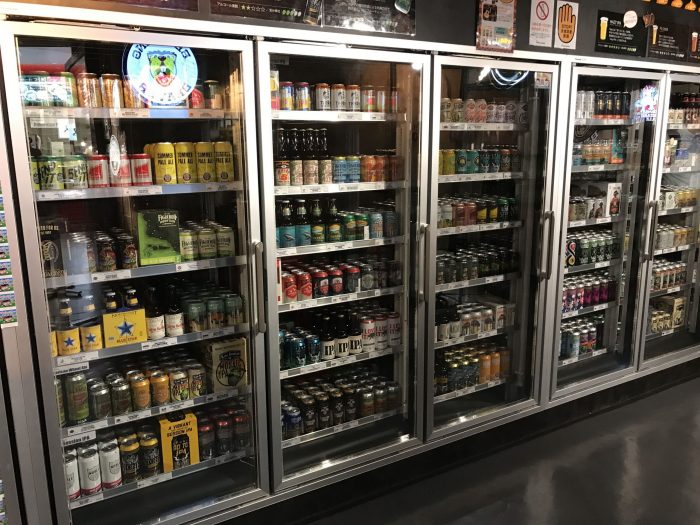 As you might expect from the name, Antenna America specializes in American craft beer & food. If you’re an expat or just a fan of beer from the United States, Antenna America is the place to go. The bar has 10 taps, plus hundreds of bottles & cans, including rare releases from breweries such as Firestone Walker, Bear Republic, Stone, Maui, & more. 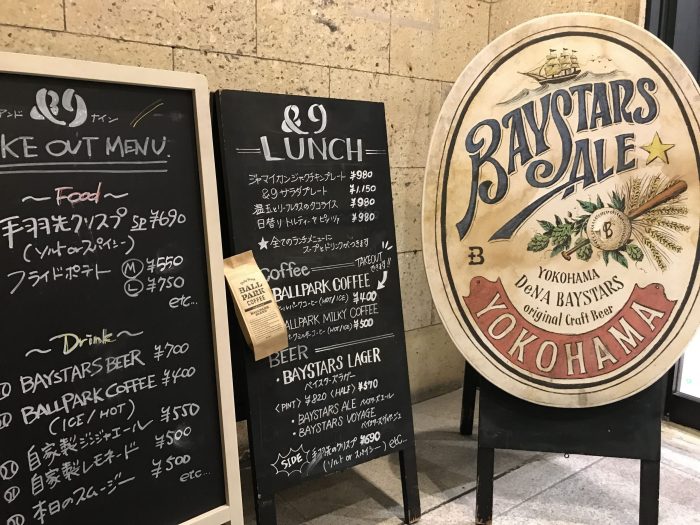 A few of the beers are special “Baystars” beers brewed by Yokohama Bay specifically for the bar, while the rest are Japanese guest taps. There is also another &9 located in Yokohama station.

As you can see, there are plenty of great places to drink craft beer in Yokohama, whatever you’re in the mood for.

If you’ve spotted any other great places for beer in Yokohama, let me know in the comments!

Here are some great Yokohama tours & other things to see & do in the city.

If you’re looking for a place to crash after drinking beer in Yokohama, check out these Yokohama hotels & AirBnbs. 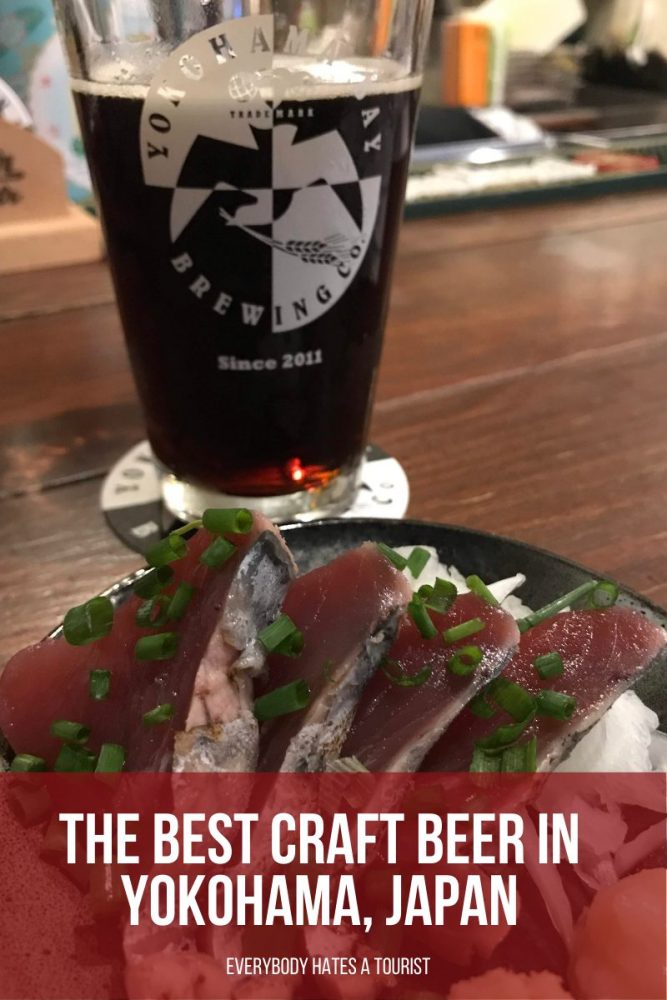