I love baseball. I’d always wanted to attend a Japanese baseball game, as I’d heard that the unique experience is nothing like watching a game in the United States. One of the reasons why I decided to go to Fukuoka (other than it being the home of tonkotsu ramen) was that the city is home a Nippon Professional Baseball (NPB) team, the Fukuoka SoftBank Hawks. Their home schedule happened to coincide with my trip, so I was able to attend two games.

Obtaining tickets to a Japanese baseball game isn’t easy. The difficulties aren’t due to scarcity of tickets, but rather that ticket sites are only in Japanese, and most of them only accept Japanese payment methods. There are services available that will help foreigners buy tickets, but they can be costly. If you don’t want to risk a particular game being sold out ahead of time, then find a professional service. As for me, I didn’t want to do this option, so I expected that I was going to have to buy a ticket on the day of the game.

However, I figured out a couple of weeks beforehand that Fukuoka SoftBank Hawks tickets can be purchased through their app, which you can find by searching for “Fukuoka Softbank Hawks”. The app accepts foreign credit cards. Just be sure to use a credit card that has no foreign transaction fees. The app is still in Japanese, so you will need to translate. Google Translate will work just fine for this. Just copy and paste all of the Japanese text into Google Translate, and you should be able to figure it out. 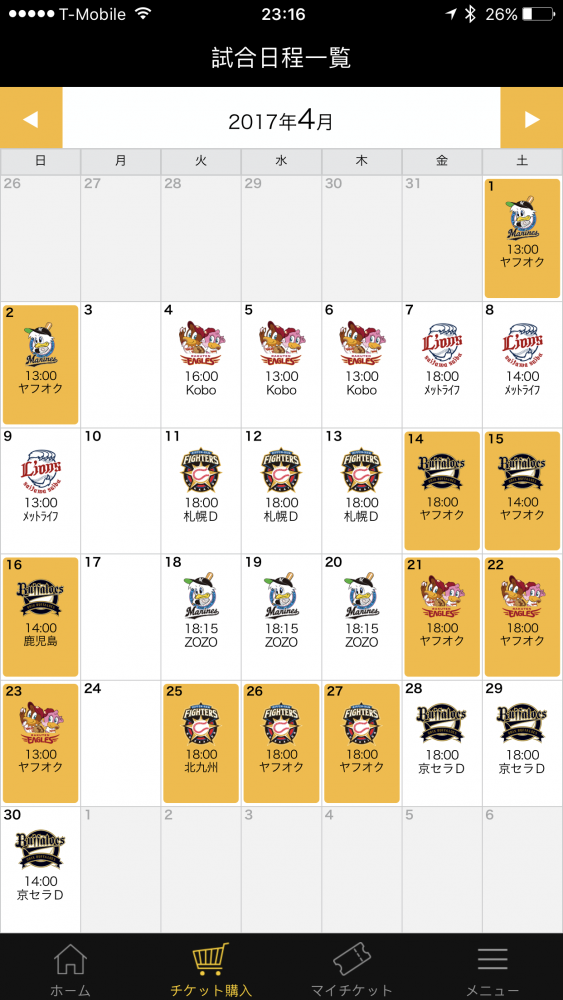 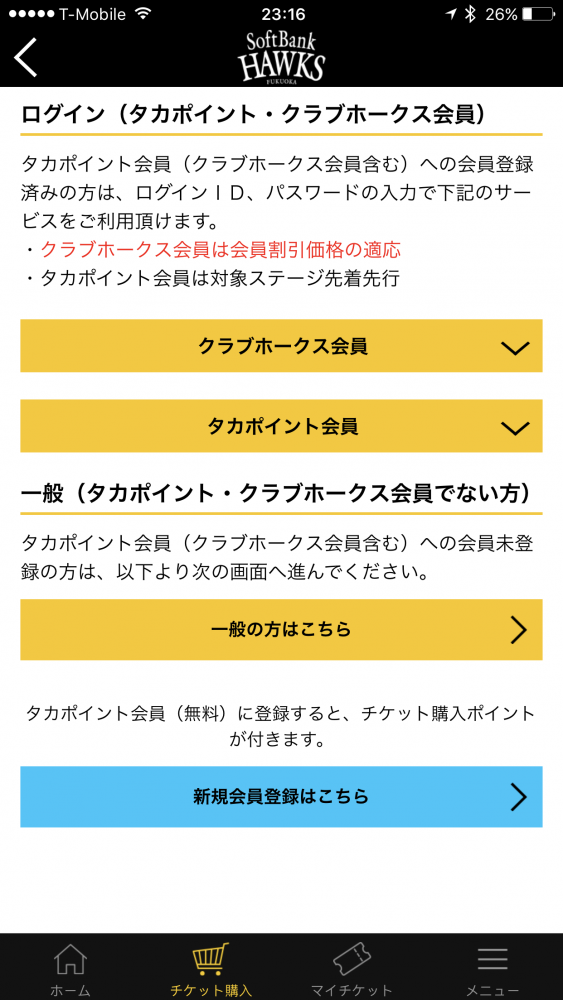 It will likely take you a few attempts to get everything working properly. If there’s a place where your own info isn’t accepted, use your hotel’s info. The tickets are digital, eliminating any need to deal with shipping or will call. 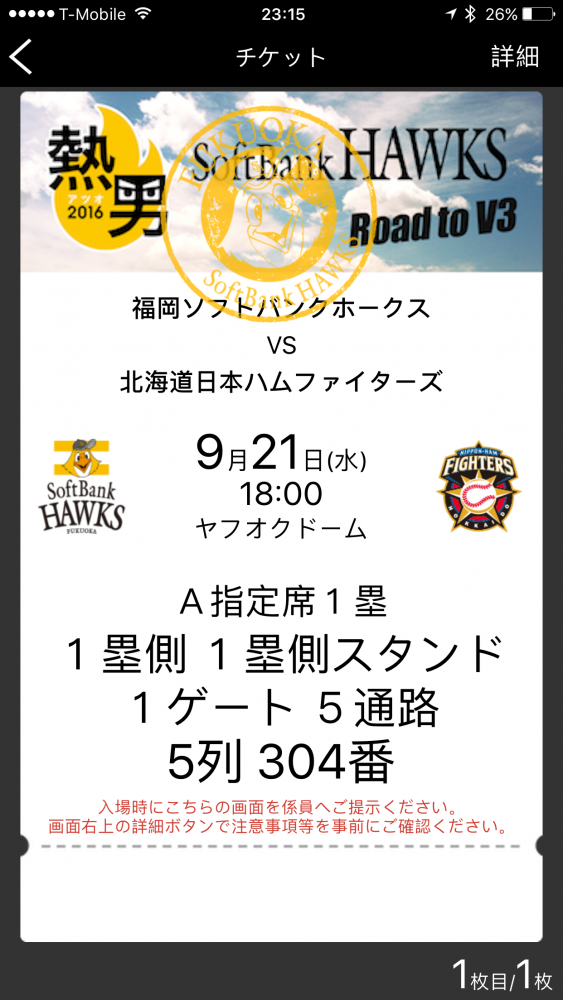 The Fukuoka SoftBank Hawks play in the Fukuoka Yahuoku! Dome. The stadium is located along the water, northwest of central Fukuoka. Getting to the ballpark isn’t too difficult, but depending on the size of the crowds, the walk from Tojinmachi subway station takes 15-25 minutes. 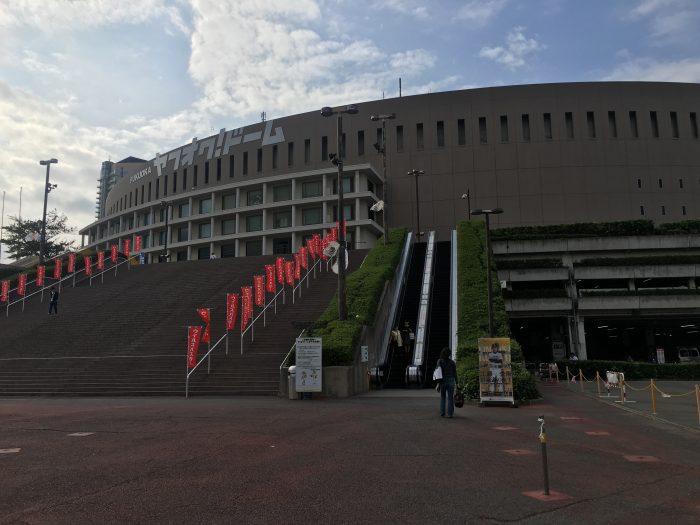 Since it was my first Japanese baseball game, I wanted to take in the whole experience. I arrived about 2.5 hours before the game, so the gates weren’t open yet. There were open souvenir shops outside. 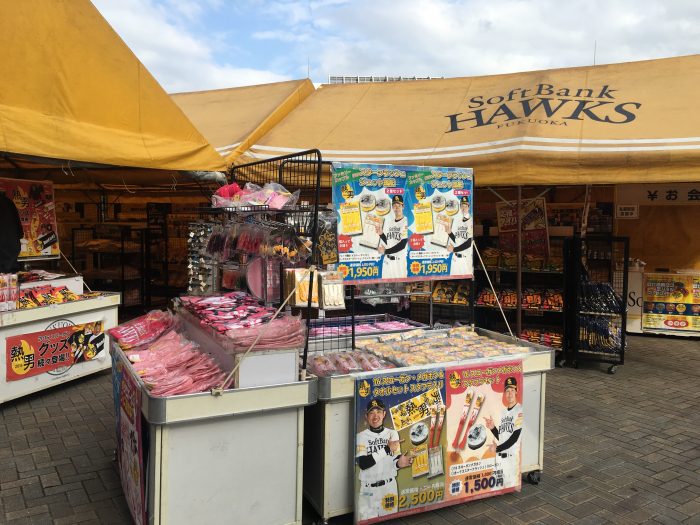 Plus there was this Colonel Sanders statue dressed in Fukuoka SoftBank Hawks gear. 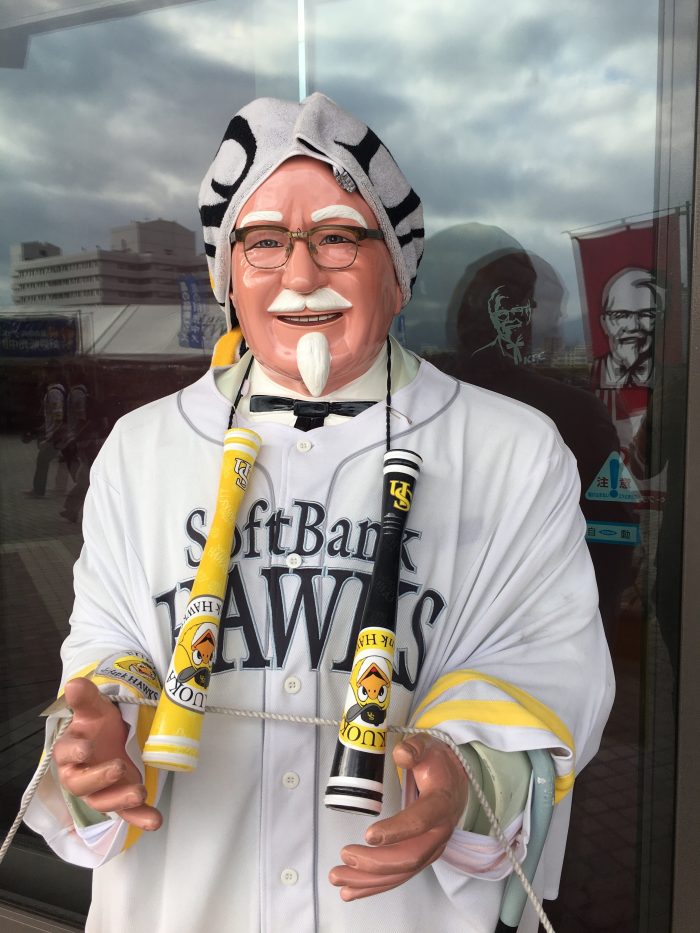 A little while after the gates opened, I headed inside. I had been concerned that I might not be able to bring my camera in, but I had no problems. The security staff didn’t even search my bag. I had no issues with the ticket app either. Outside food & drink is not allowed into the ballpark, but there is a market right outside if you want to have some drinks & snacks before you go in. That said, if you’re expecting typical American ballpark prices, you’ll be pleasantly surprised by how reasonably everything is priced in Japan. There was typical ballpark food (including two types of churros), but also Japanese items as well. It’s Fukuoka, so of course they had tonkotsu ramen. 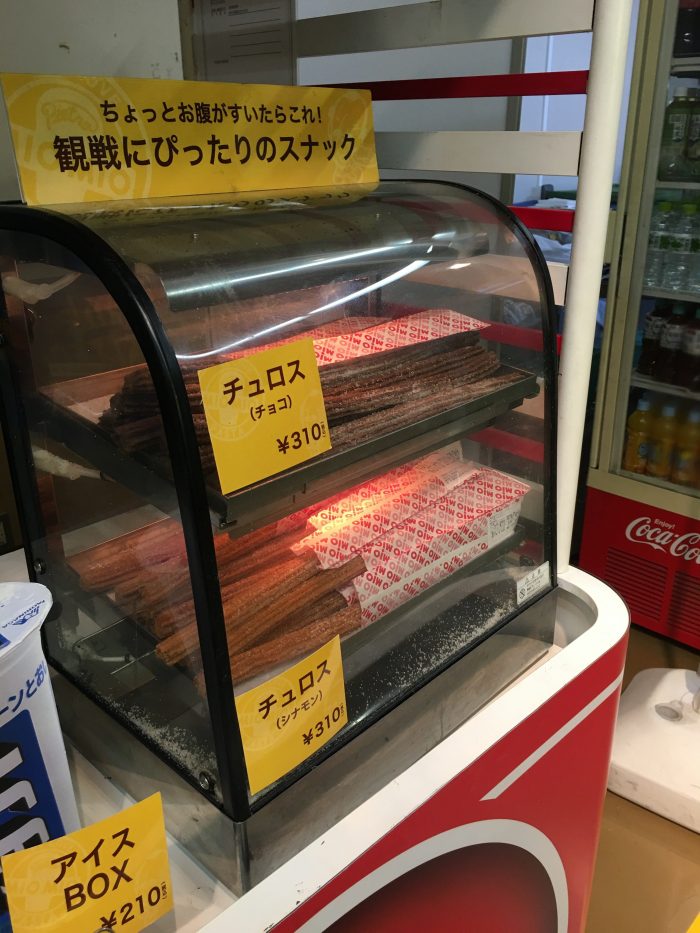 As far as beer, there were a couple of beers that strayed into craft territory, Tokyo black porter and Yona Yona ale, though they were from Kirin. Just like American stadiums, there were vendors walking around each section, but here, there were girls dispensing beer out of giant backpacks. 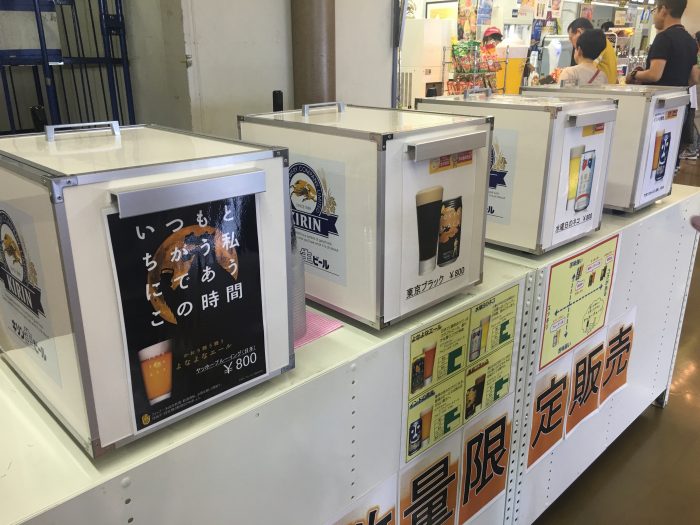 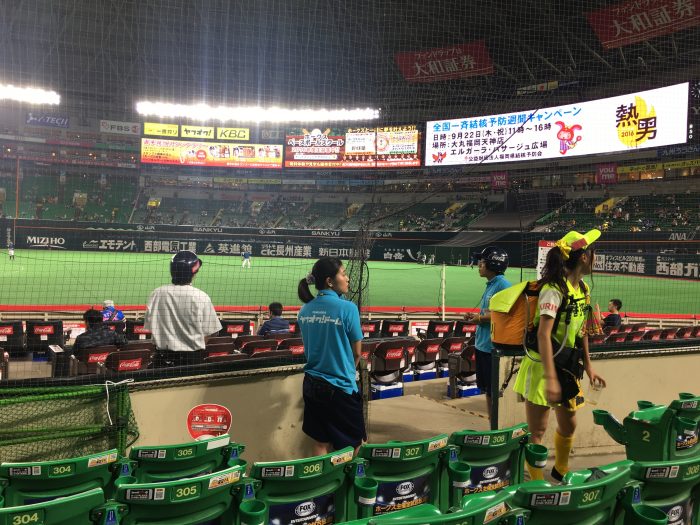 It was immediately obvious that this would not be like attending a baseball game back home. There was a video featuring one of the Hawks players demonstrating how to eat. All ballparks should do that. There was a giant poster of a cheering dog above the upper deck. 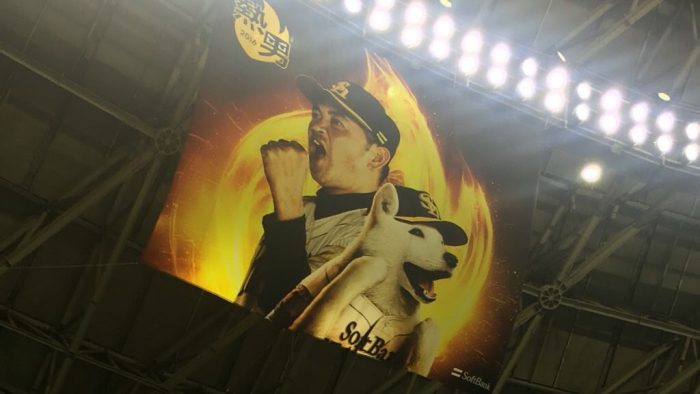 I got to my seat just as batting practice was starting for the visiting Nippon Ham Fighters. The Fukuoka Yahuoku! Dome is retractable, but it was closed for both games I attended. My seat was close to the action, though it was behind netting. Between the net & there being another field level section in front of me, the view may have actually been better a bit higher up. During batting practice, I noticed that there were periodic whistles. It took me a while to realize that the whistles were coming from ushers who were warning fans about foul balls & home run balls during batting practice. If you hear a whistle, you know to be aware.

Batting practice for the Hokkaido Nippon-Ham Fighters ended about an hour before the game. Unexpectedly, the SoftBank Hawks then came out for warmups themselves. In the United States, warmups like this only happen right before the game, but they were out much longer. By this point, fans were already waving flags in the bleachers. 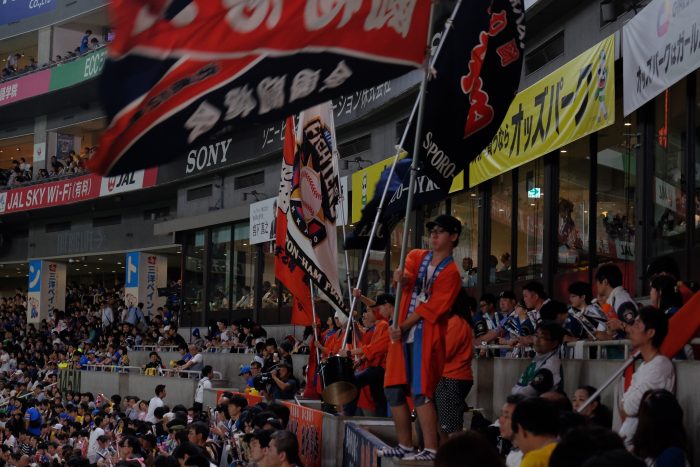 Crowds at Nippon Professional Baseball games are nothing like those in the United States. I mean this in the best way possible. Playing styles might differer slightly around the world, but the core game remains the same. Fan behavior is where Japanese fans truly make the atmosphere unique. 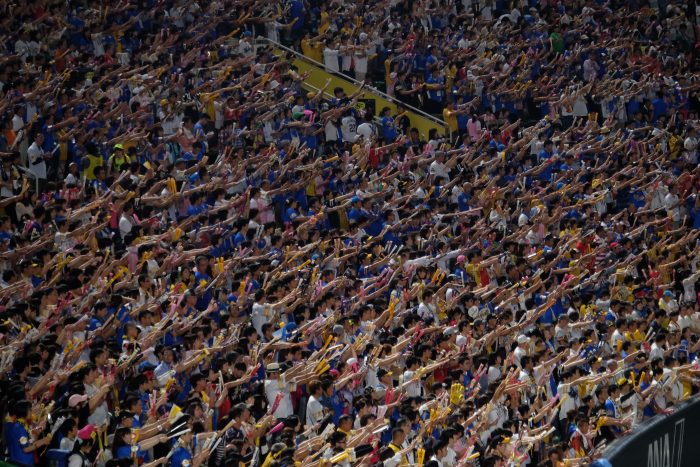 Visiting fans have their own special section. This isn’t just a place for fans to sit together; it’s also where chants and songs are led. There were people with horns and drums that could be heard from anywhere in the stadium. In between innings, songs played while a video of a guy hitting baseballs to the beat played on the Jumbotron. Fans would clap or hit plastic bats together to the beat. 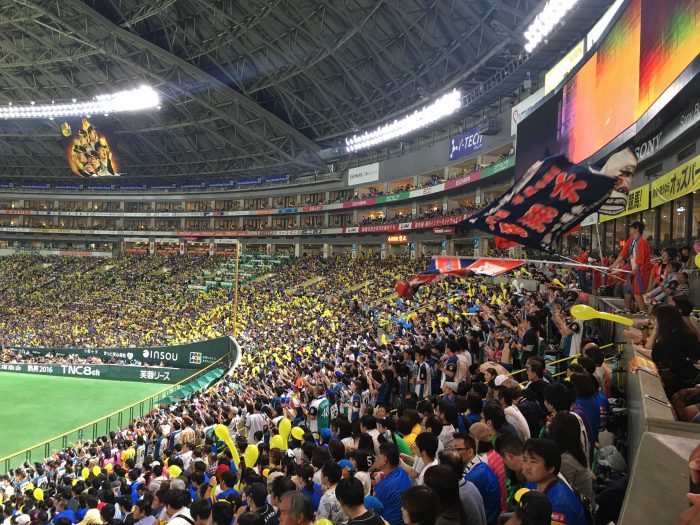 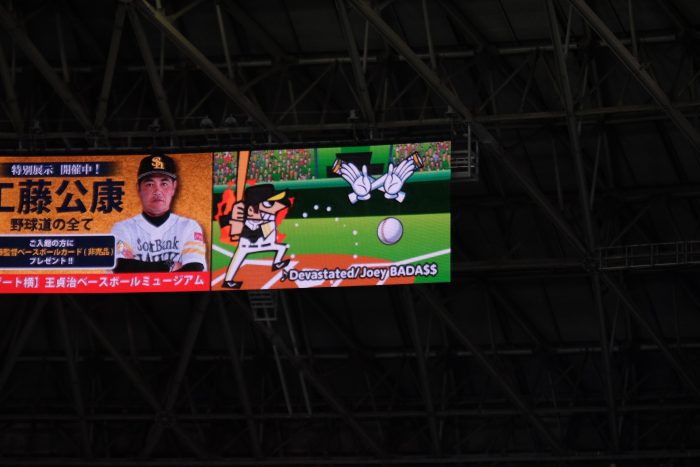 At MLB games, each player has their own walkup music, but then aside from cheering fans it’s mostly silent during their at bat. This isn’t the case at NPB games. Each team’s fans play music when their team is batting. During the 2nd game that I attended, I realized that not only are the fans singing while the team bats, but each player also has their own special song. Never have I wanted to be a professional baseball player so badly.

As for the game itself, it was a good one. The biggest star in Japanese baseball is the Hokkaido Nippon-Ham Fighters’ Shohei Otani. He’s only 22 years old, but there is already talk about when he will come over to the United States to play. Otani is truly a special player because not only is he an outstanding pitcher, he’s also a great hitter.

After seeing Otani play, I was impressed. He pitched 8 innings while striking out 8 Hawks, giving up just 1 run on 4 hits. Oh, and he also added a double. Teammate Brandon Laird hit his 38th home run of the season to give Hokkaido a 2-0 lead in the 2nd inning. Fukuoka wouldn’t get on the board until the 5th inning, pulling within one run.

During the 7th inning stretch, Fukuoka fans simultaneously release balloons into the air. It looks pretty cool, even if the balloons do resemble giant yellow sperm. 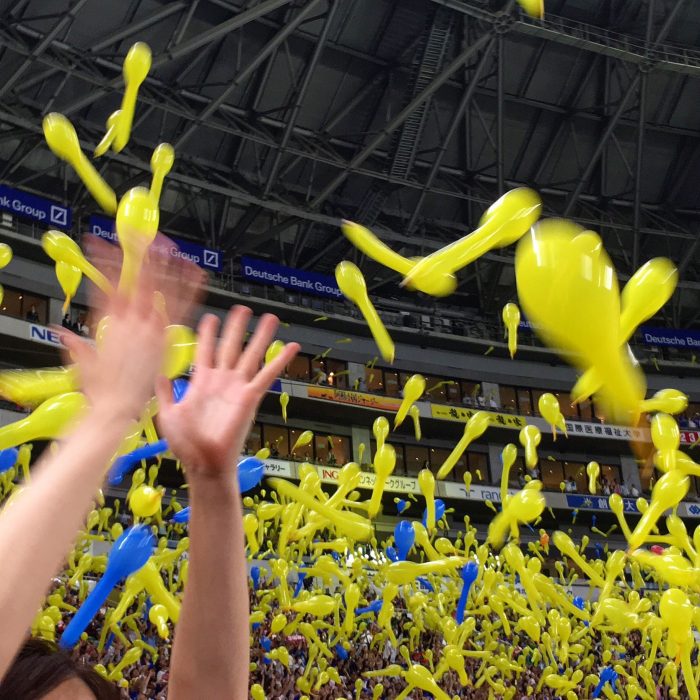 In the bottom of the 9th, Fukuoka came to the plate still down a run. A leadoff double served as a great start to the inning. The next batter was hit by a pitch. A sacrifice bunt put runners on 2nd & 3rd with one out. Hokkaido then made a pitching change and got a strikeout for the 2nd out. It was all up to the final batter of the game. A hit would bring in two runs, winning the game Fukuoka. The batter drove a deep fly ball, sending the outfielder further and further back as the crowd roared in excitement.

It was caught at the wall, ending the game. Hokkaido beat Fukuoka, 2-1. Everyone shuffled out, heading back down the crowded narrow paths to the subway station. It took much longer to get back to the subway than it had to get to the stadium. At least there was no wait to get on a subway train once I did get to the station.

There are about 27 mascots right now, plus cheerleaders. One of the mascots appears to be dead. Nobody is concerned pic.twitter.com/dYTTex0FwJ

The next day I headed back to the stadium for my second Japanese baseball game. This time it was a day game with a 2pm start. Since I had been there the previous day, I didn’t need to go inside early. Instead, I went to the Sadaharu Oh Museum, which is attached to the Fukuoka Yahuoku! Dome. The museum is located beyond the outfield. There’s a nice view of the entire ballpark out its windows. 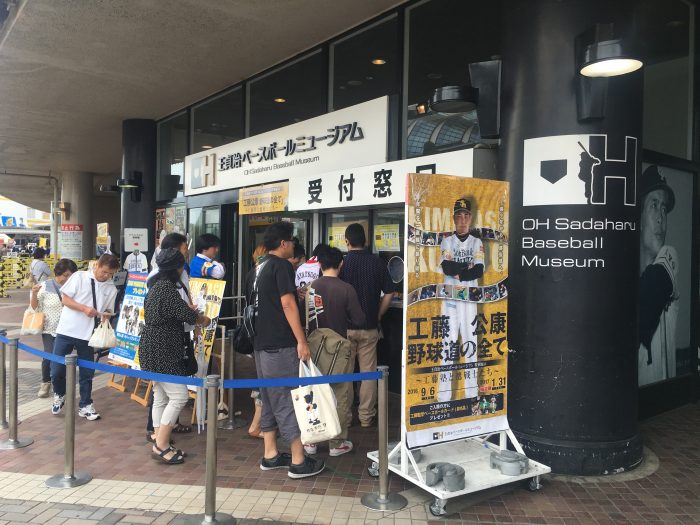 The first half of the museum focuses on the life of Sadaharu Oh, one of the greatest baseball players of all-time. His 868 home runs in the NPB are the most of any professional player in the world. While he didn’t play in Fukuoka, he was the manager of the team for a long time after his playing career ended. 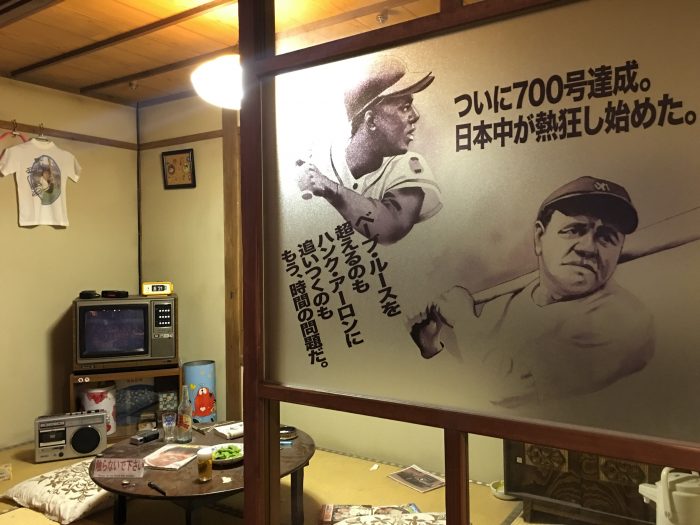 The museum is mostly in Japanese, but baseball translates well. There is also an iPhone audio guide available. Oh’s career with the Yomiuri Giants spanned the 60s & 70s, so in addition to covering Japanese baseball, the museum is a time capsule of that era in Japan. There were plenty of videos of Oh’s career milestones, including when he hit his 756th home run to pass Hank Aaron. 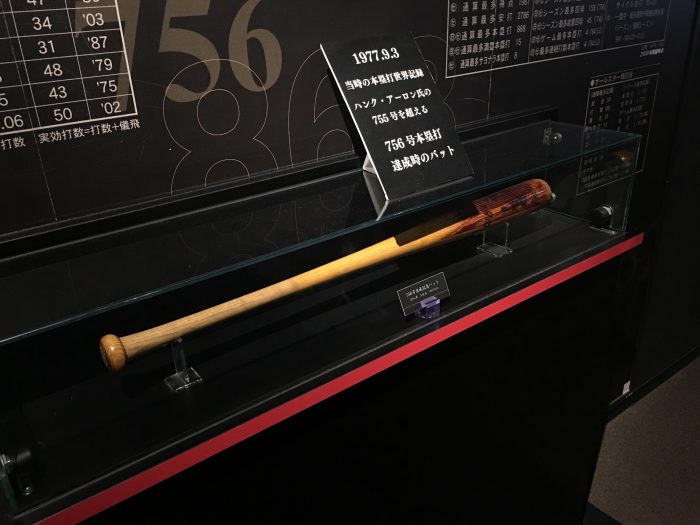 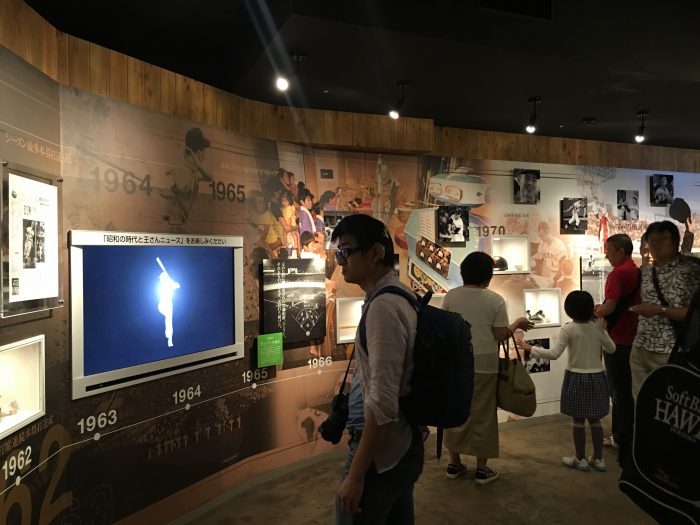 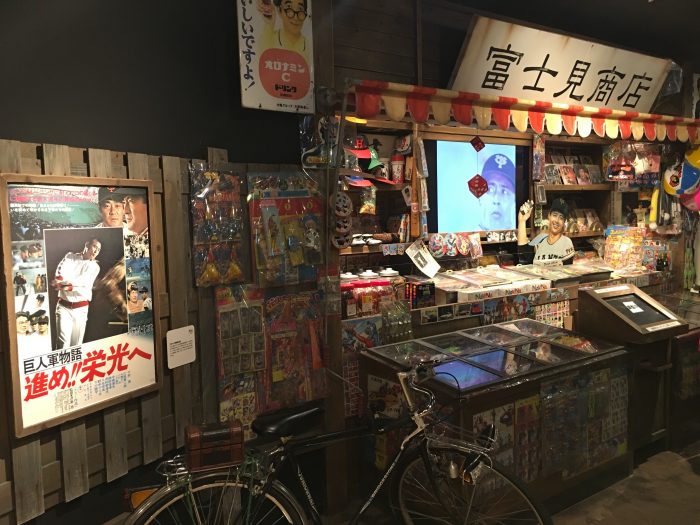 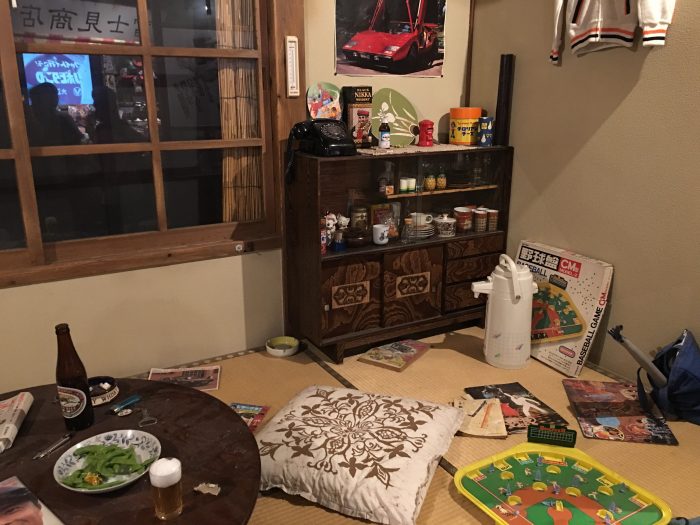 The other half of the museum is about the history of baseball in Fukuoka. Beyond the rooms housing the gift shop, memorial hall, & awards and trophies, there was a nice interactive play area. You could crouch where a catcher would to get a sense of how fast pitches travel, and kids could practice pitching & hitting. 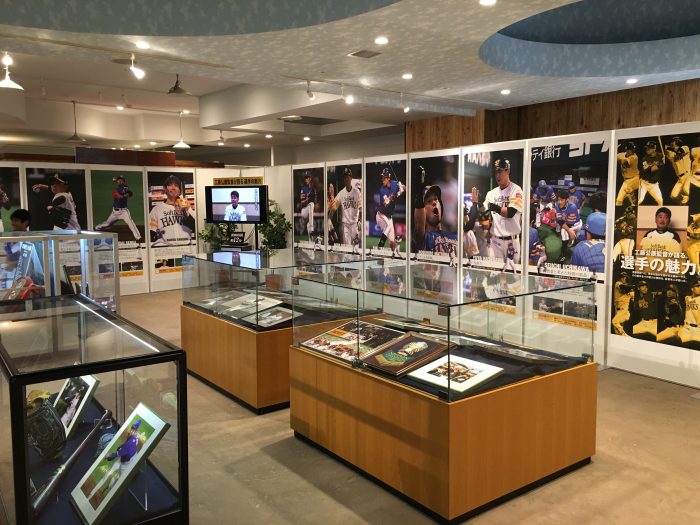 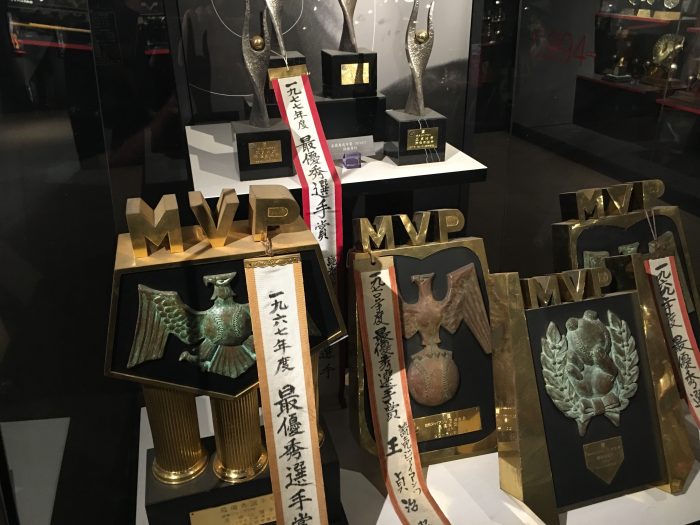 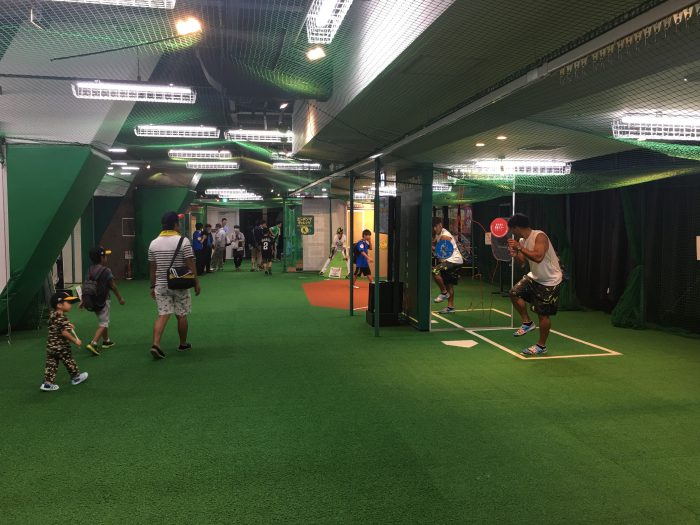 The whole place takes perhaps an hour to see, and admission is 1000 yen. If you’re going to a game, the Sadaharu Oh Museum is worth seeing beforehand, but unless you’re a massive baseball fan, you might not want to go out of your way to see it if there’s no game that day.

As for my 2nd Fukuoka SoftBank Hawks game, my ticket was in the standing room area. When I had bought my ticket there were very few tickets available, so I had gone with whatever I could get. Of course, there was then far better availability through the app a few days later. The standing room area is in the outfield. People with those tickets know to bring their own chairs and picnics. Almost every spot was taken by the time I got to the section. The only one I could find was standing in front of a child. I felt bad that I was blocking his view a bit, but at least he was on a level a couple of feet above me. In addition to having a great view of the entire field, the standing room section was right near the visiting Hokkaido fans. 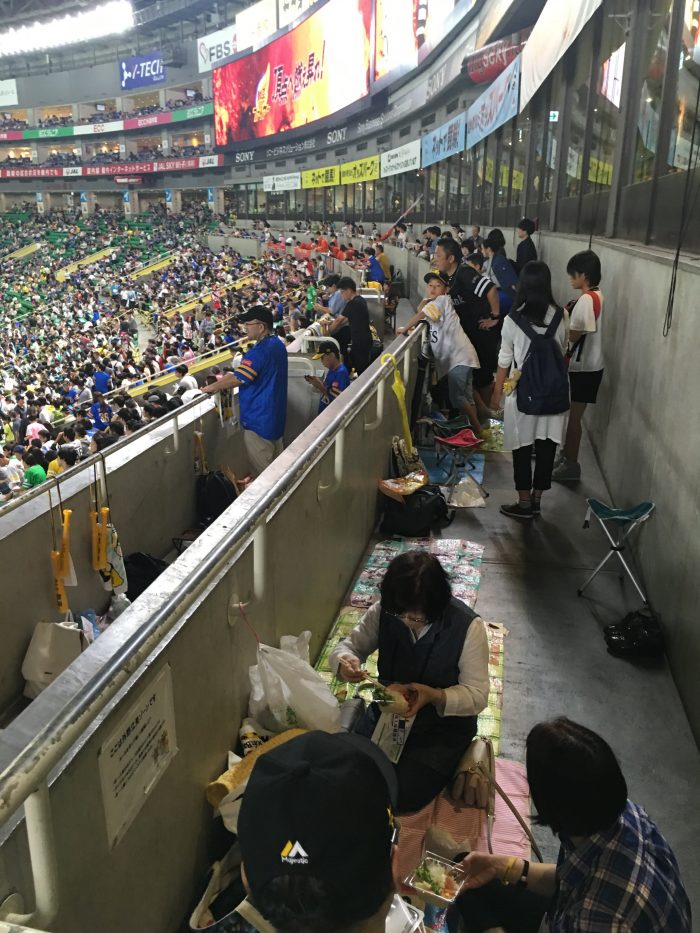 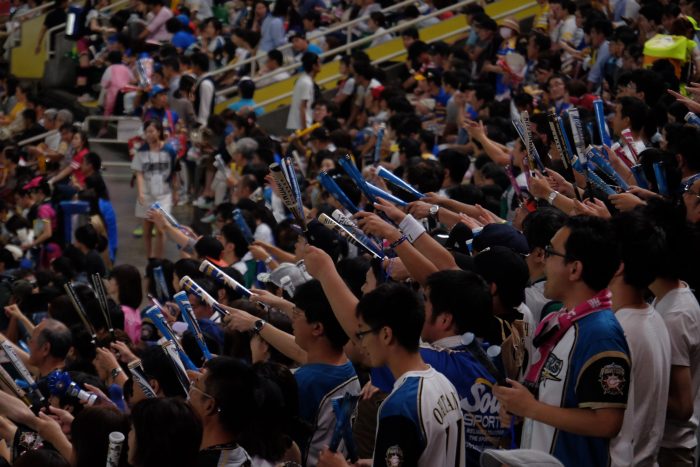 It was another good game, but the home Fukuoka fans left disappointed again after a 5-2 loss. The two sides were two of the top teams in Japanese baseball in 2016, so it was a hard-fought series with packed crowds for both of the games I went to. This time I participated in the balloon release during the 7th inning stretch, thanks to a couple of nice girls standing next to me who offered me a spare balloon.

If you’re a baseball fan, I highly recommend going to see a Japanese baseball game. The quality of the competition is good, and the crowd is unlike anything you’ll see in the United States. In fact, the constant energy of the fans might spoil you on just how great an atmosphere can be. Attending a Japanese baseball game in Fukuoka was a unique experience that I will never forget.