Back in May, I spotted a great airfare sale with flights from San Francisco to Tokyo on Japan Airlines in October for around $600. Since I knew it would be a nice time of year to visit Japan, and some of my friends would be there during that time, I jumped on the deal & booked a ticket. Then I realized that I would be there for the 2019 Rugby World Cup. It turned out that another round of tickets would be going on sale the next day! That’s how I ended up attending the Rugby World Cup match between the United States & Argentina.

In order to purchase Rugby World Cup tickets, I first had to create an account. Then I had to sit in an online waiting room for a few hours. It wasn’t a big deal, since I wasn’t going anywhere. I just kept the tab open until it was my turn to buy a ticket.

Finally, after a long wait, I was able to buy a ticket. By then, the only tickets left for Argentina vs USA were in the Level A category, the most expensive regular ticket. The ticket cost 15,000 yen, which is about $138. That’s still not terrible for a major international sporting event. I figured it’s a once-in-a-lifetime opportunity, so I had no issue with paying it.

I was going to get to go to the Rugby World Cup!

How to get from Tokyo to Kumagaya

I knew I would be starting my trip out in Tokyo, but with the match being in nearby Kumagaya, I could still use Tokyo as my base for that part of the trip.

Getting from Tokyo to Kumagaya by train was easy. There are two options: the shinkansen high-speed train (45 minutes) or a local train (75 minutes). Since the local train was way cheaper, and I had plenty of time, I took that. It was easy to tap in and out at the fare gates with my Welcome Suica card, which I had bought at Tokyo Haneda airport when I arrived in Japan.

While I was in Tokyo, I had seen several temporary Rugby World Cup shops that had been set up. One of them had a giant replica of the Webb Ellis Cup that you could take photos with.

The train got more crowded as the journey went on, but it was never packed.

Getting to Kumagaya Rugby Stadium for the Rugby World Cup match

Upon arrival at the Kumagaya train station, it was easy to see that Rugby Town had gone all out for the event. 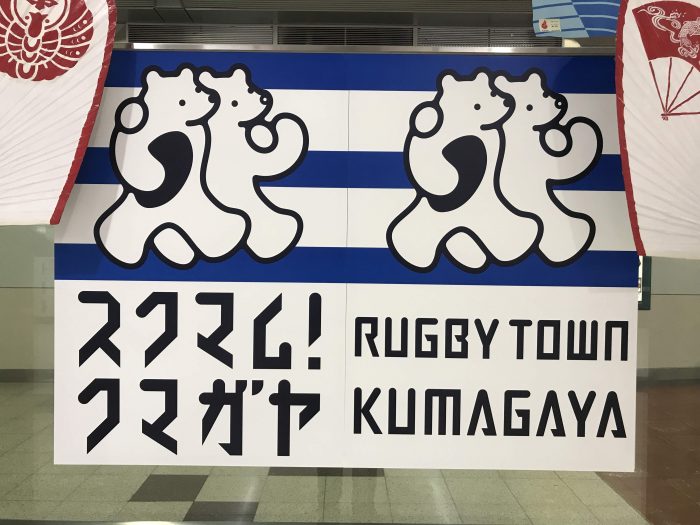 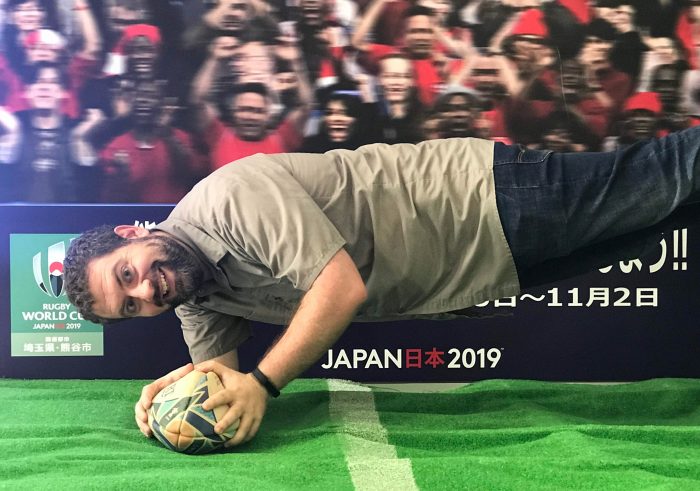 There were greeters every few feet passing out information such as maps, stickers, and even two-sided fliers with the flag & national anthem lyrics for each country. A group of clever Jehovah’s Witnesses were also passing out literature to people who were happy to take anything that was being handed out. 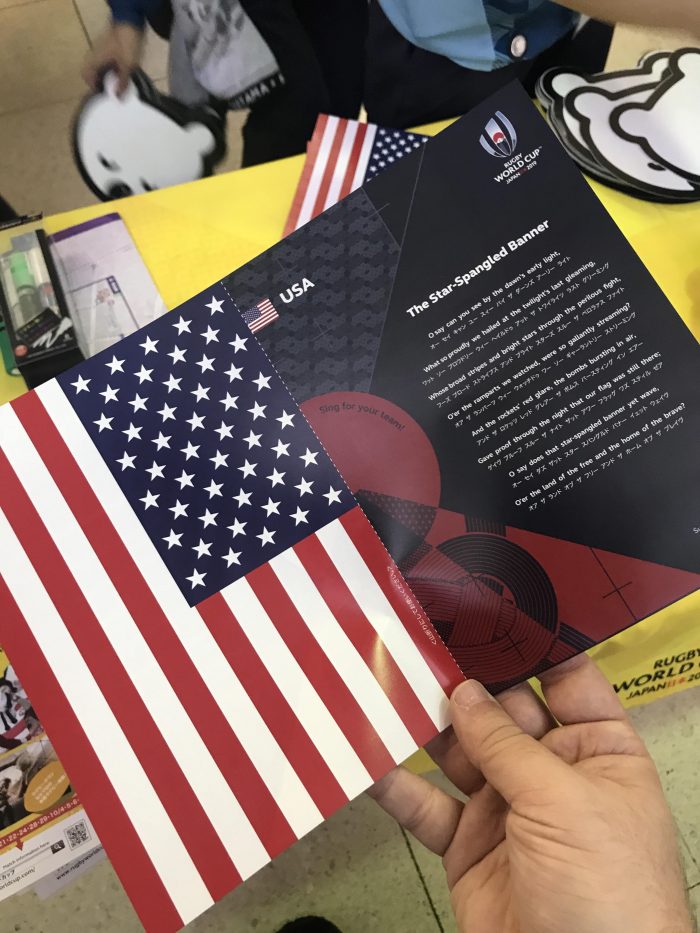 Volunteers were directing people to the Rugby World Cup Fanzone, where people could hang out & then take shuttle buses to Kumagaya Rugby Stadium. They were high-fiving everyone, & there were plenty of photo opportunities. It was impossible to not get excited for the match when the town was so welcoming. 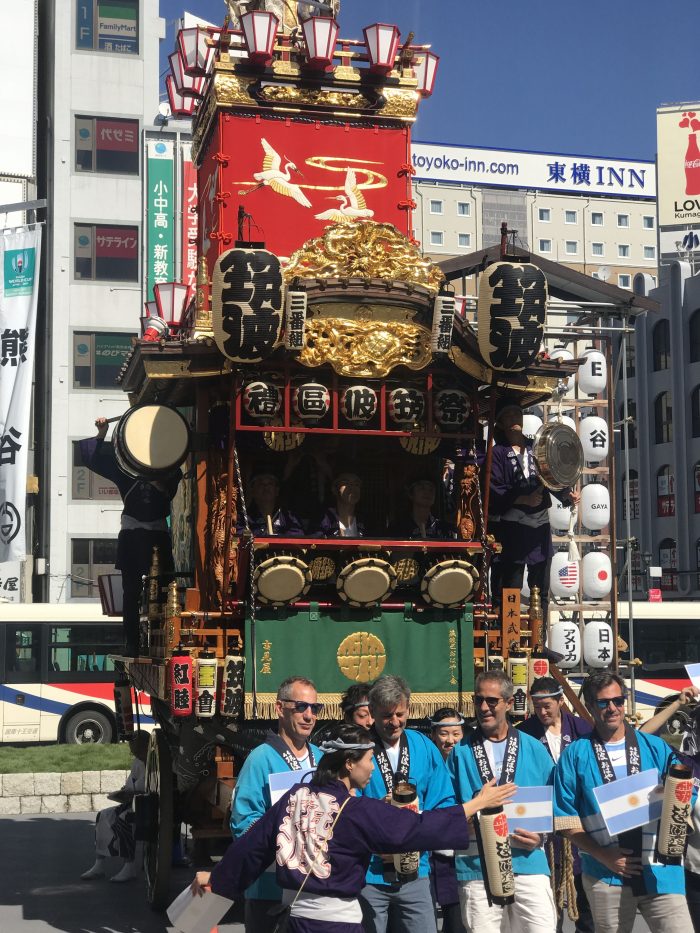 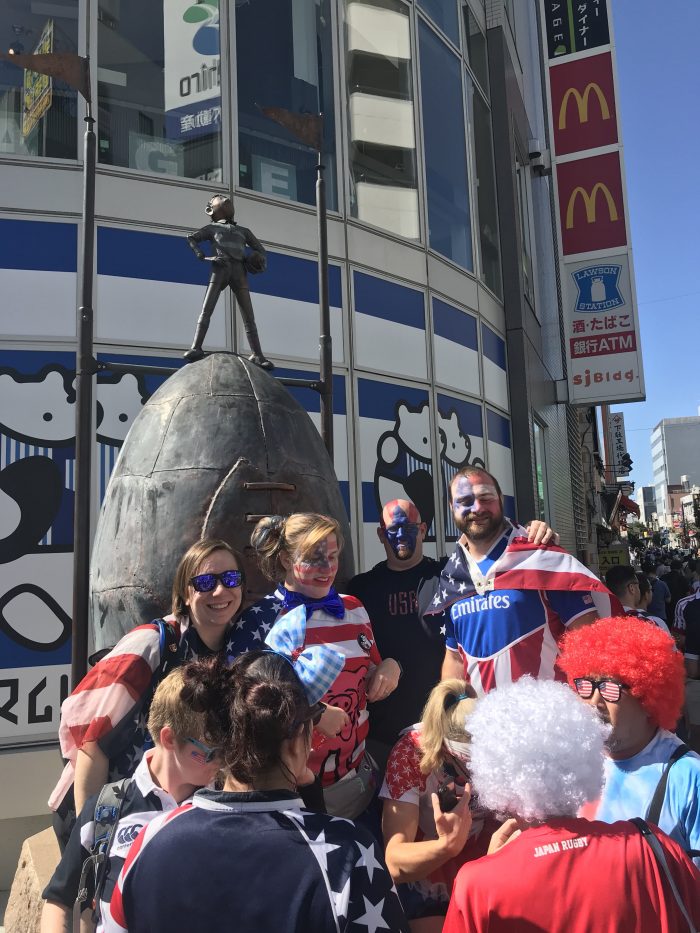 It took about 15 minutes to walk to the Fanzone. Here there was a stage set up along with a small merchandise booth and a Rugby Town Museum which showcased local rugby memorabilia. 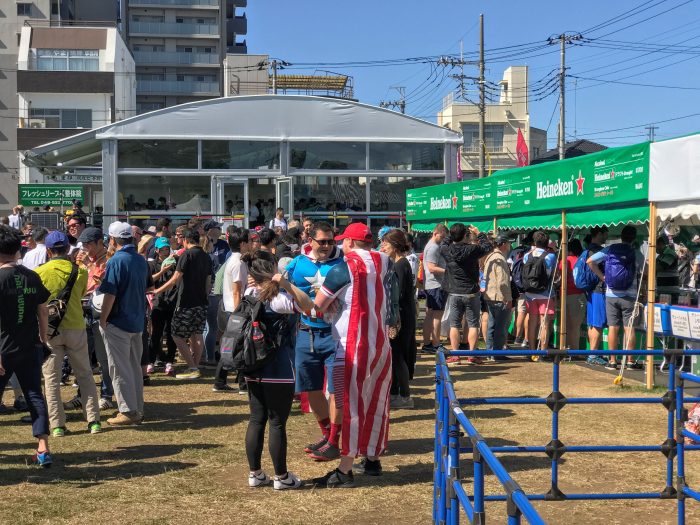 Of course, the main attraction was the food & drink stands. For food, there were a variety of options, including udon, karaage, and yakitori.

There was also a stand selling something called the “Megaton Dog.” This seemed like it would not be the most appropriate topic to be referencing in Japan. The stand had a modern military motif, but it still made me cringe a bit, especially having taken a day trip to Hiroshima. 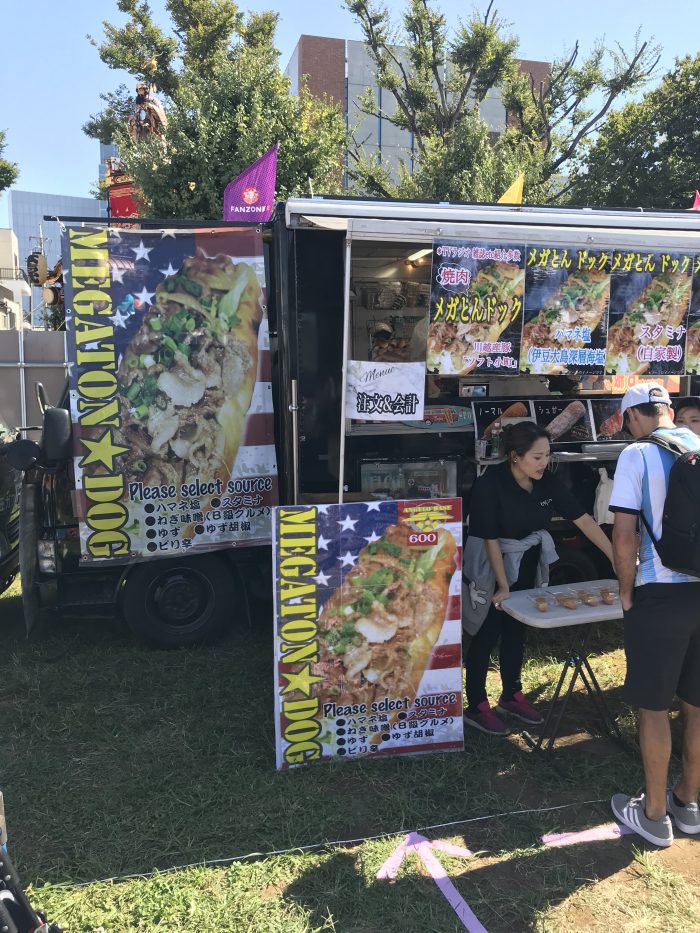 As with most global events, there was a sole beer provider by a sponsor brewery, in this case Heineken. I skipped this in favor of a highball (whiskey & soda), which I had with karaage. 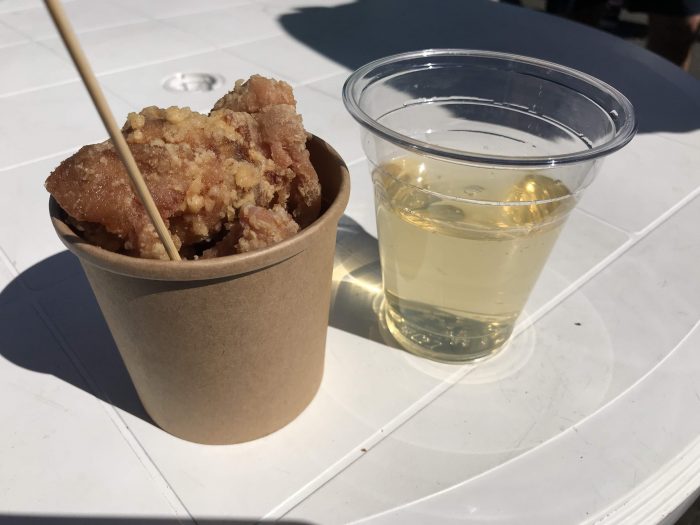 After walking around the Fanzone for a bit, it was time to take the free shuttle to the Kumagaya Rugby Stadium.

The free bus shuttles worked well, and I was able to get to the stadium about an hour before kickoff without any wait. Along the walk to the stadium, more volunteers were giving out high-fives. Everything was so well organized. If this is how the 2020 Tokyo Olympics will be, I would love to go. Unfortunately, I haven’t been able to get any tickets yet. 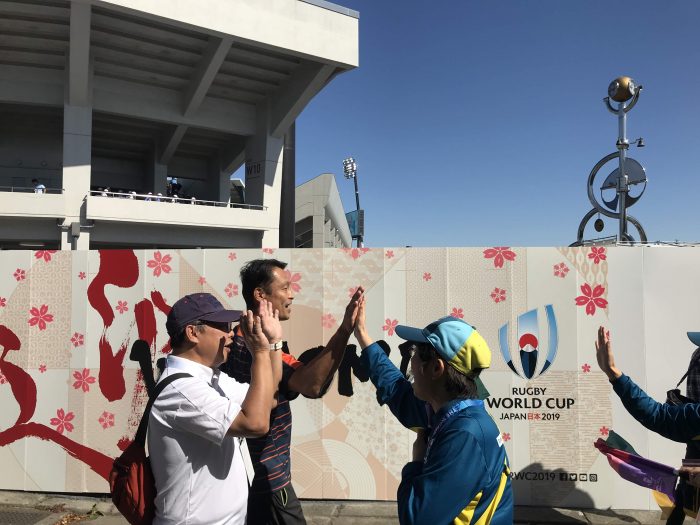 Outside the stadium, there were more food stands, including a couple with okonomiyaki & takoyaki. There was one massive merchandise tent, but the queue was so long that I didn’t bother trying to go. This was the sole aspect of the day that could have been improved, as they should have had all the same merch options at the Fanzone to spread the demand out. 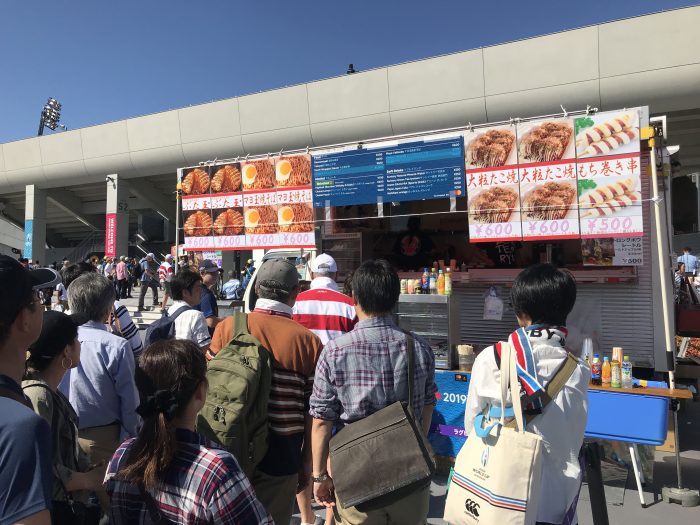 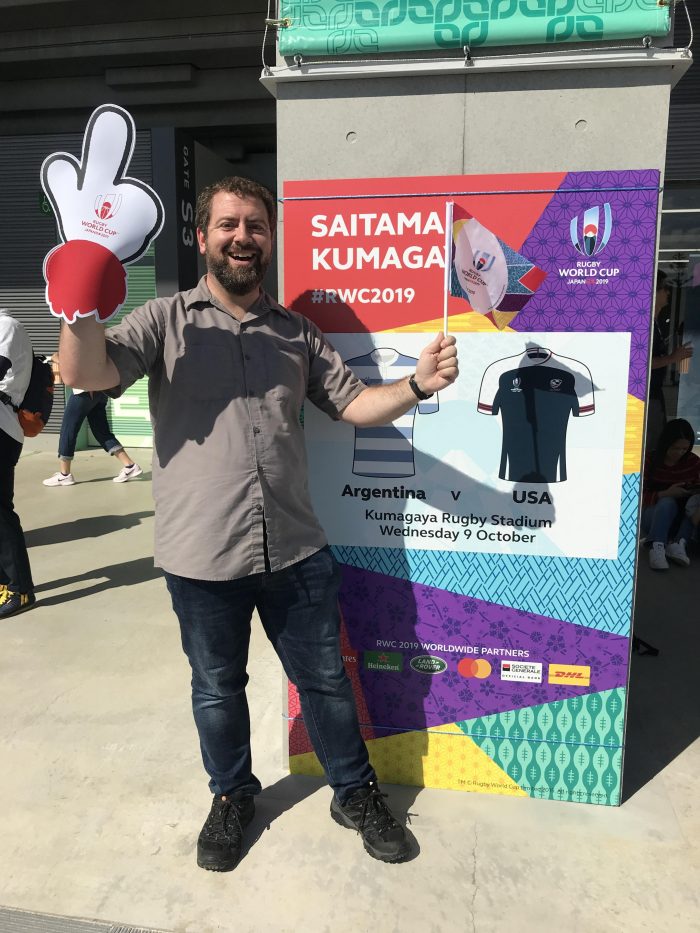 I headed to my seat in time to watch the end of the prematch warmups. Kumagaya Rugby Stadium is a beautiful facility. It’s broken up into separate smaller sections, each with their own restrooms and beer stand, so it felt like a much more intimate place, and there were barely any lines for anything. The beer stand again sold Heineken, but there were highballs as well. There was even decent WiFi!

My seat was on 3rd row of the upper level, right at the try line. It provided a great view of the action down at that particular end of the pitch. I started out in the shade, but I was in the sun for most of the match. Across the stadium, there was a huge student section. I sat next to a Japanese man who had lived in San Diego 30 years ago. He was very excited & said, “Good music!” when “A Whole New World” was played throughout the stadium during warmups. There were decent contingents from both countries, though I’d say at least 75% of the fans were from Japan. That didn’t matter, as many people had adopted a favorite nation for the day.

The USA Eagles had lost their 2 previous matches vs England & France, but their match against France had been close until the final minutes. Argentina was playing their final match of the tournament, having already been eliminated from contention thanks to losing to those same two countries. The two teams took to the pitch to Japanese drums, then both national anthems played.

Finally, it was time for the match to kick off. Argentina thought they had scored 11 minutes into the match, but it was denied on review. No try for me Argentina! 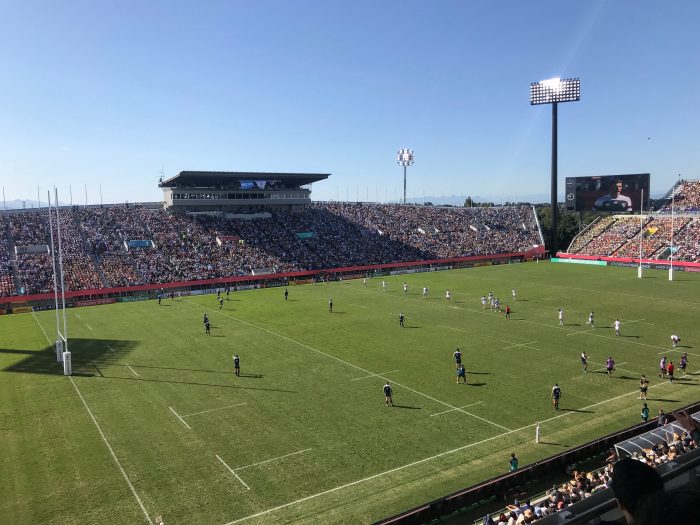 Just a few minutes later, the USA side nearly had a try of their own, but were turned back by Argentina. In the 18th minute, Argentina finally scored to break the deadlock. This was followed by two more tries in the next 15 minutes.

With time in the 1st half dwindling, the United States got on the board with a try of their own! The halftime score was 19-5 Argentina. With the Eagles having scored the final try, I hoped that they would carry momentum into the 2nd half. 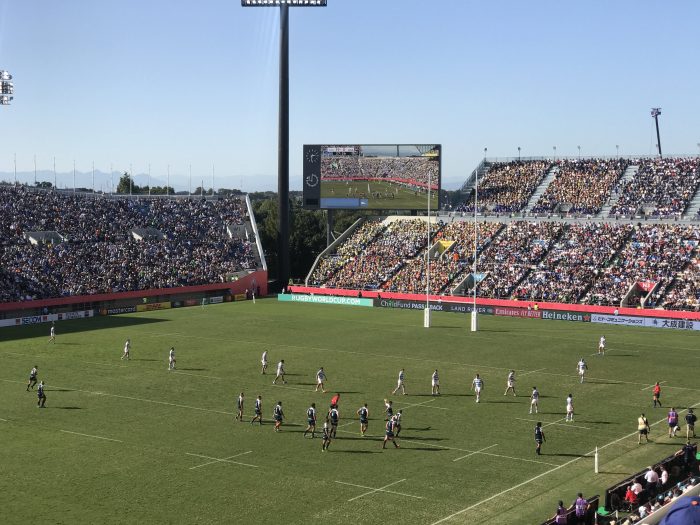 That very clearly was not to be the case. Argentina scored 3 tries in the first 15 minutes of the 2nd half to take a commanding 40-5 lead & put the match away. The teams traded a couple of tries after that, including a USA try in the 59th minute. I had a great view of it. 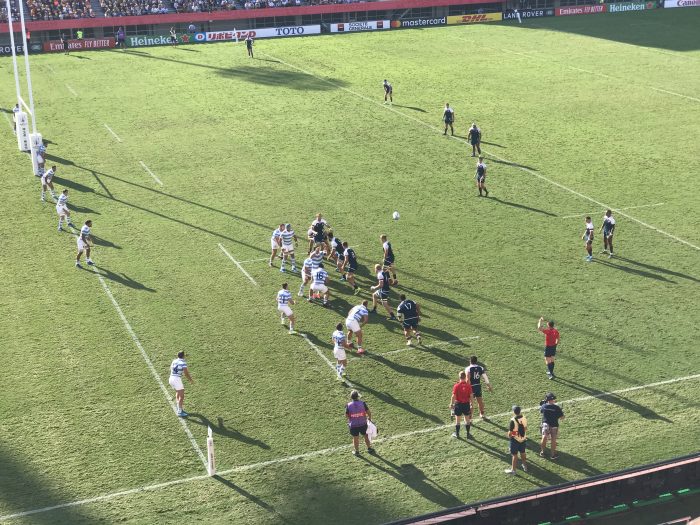 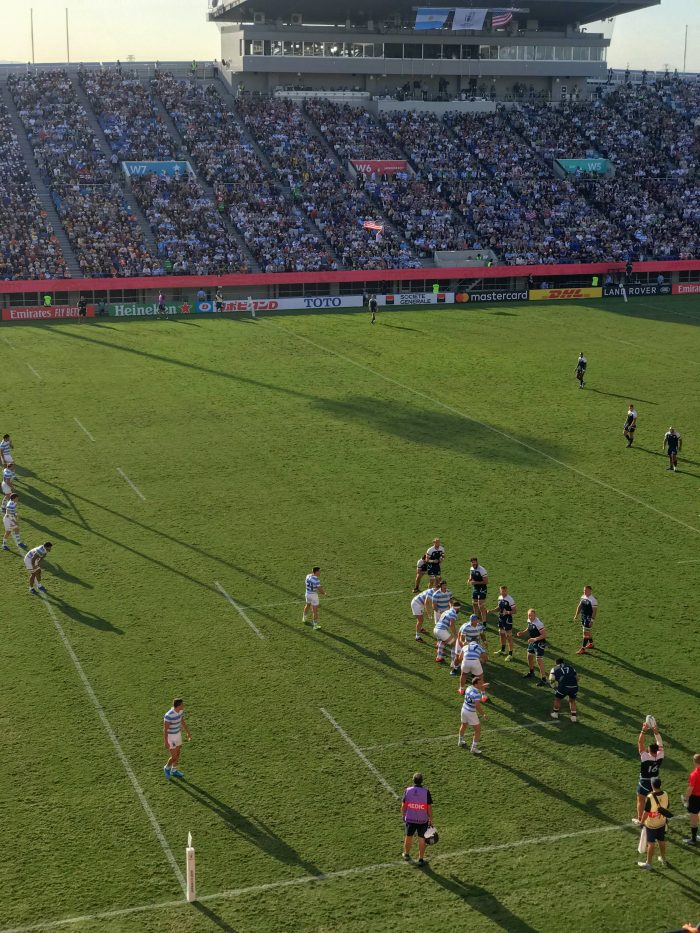 As time dwindled, the United States had one last possession. The clock passed the 80 minute mark, but the Eagles continued to push forward. As they approached the try line, the entire crowd (well, probably minus the Argentinian fans) was the loudest it had been all day, cheering the U.S. team on for one final score. Captain Blaine Scully was finally the man to do it. It was nice to see the USA rugby side keep fighting, even though they could have easily just been ready to go for beers. The final score: Argentina 47, USA 17.

Following the final whistle, the two teams congratulated each other. The United States side took a lap around the pitch, bowing to the fans in each stand, while Argentina followed. 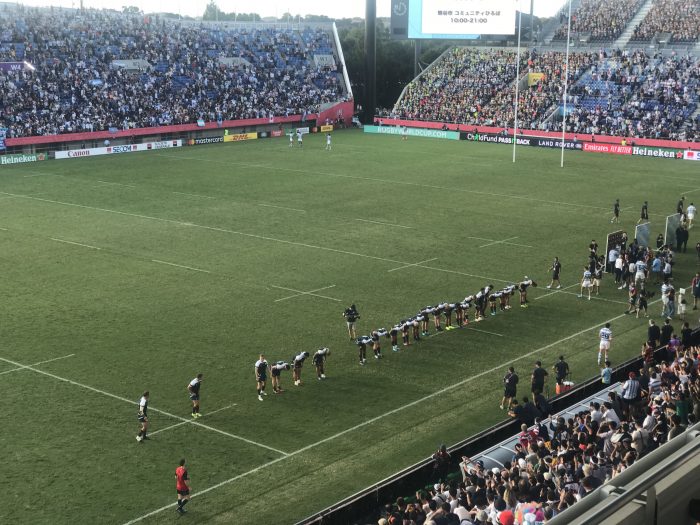 Nightlife in Kumagaya after the match

Afterward, I decided to walk about to Kumagaya, rather than take the buses. This decision was rewarded within minutes, as there was a little ice cream shop in the neighborhood just outside the stadium. 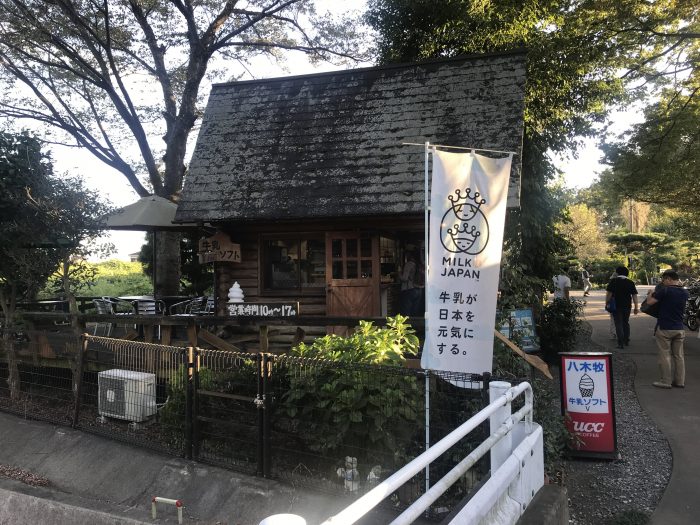 If you’ve ever traveled to Japan, you’ve probably noticed that manhole covers are more than just a way to keep people from falling into the ground. They are a source of civic pride, where cities can showcase local points of interest. Kumagaya just might have the cutest manhole covers in Japan, featuring this adorable rugby-playing cat. 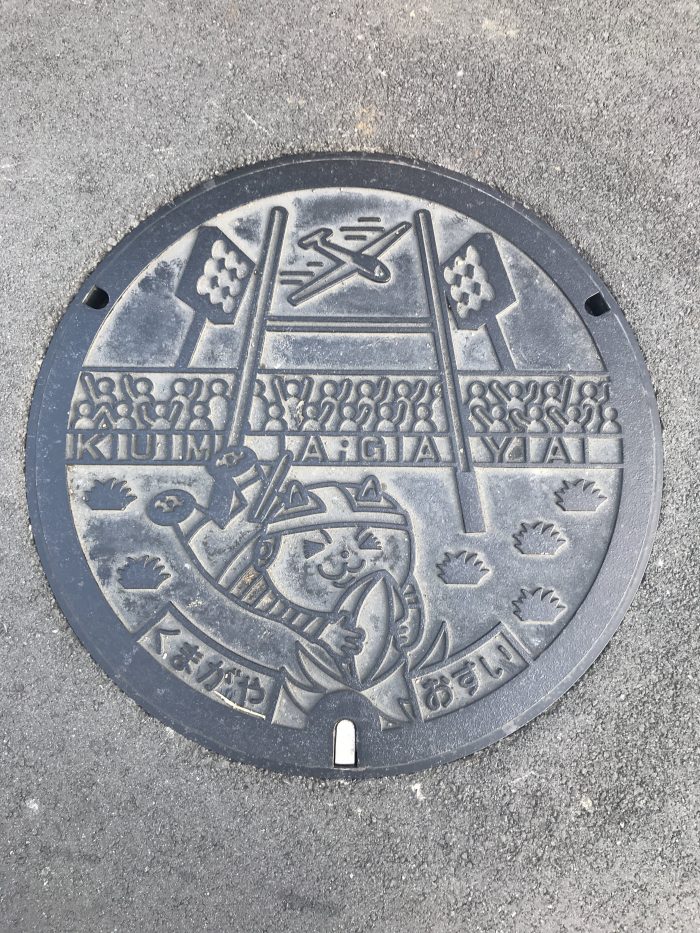 Kumagaya is not a big city, so if you’re visiting, you don’t have many bars to choose from. That said, I did find a couple of craft beer bars in Kumagaya. First, I went to The Rooney Arms, an Irish pub with a few craft beer taps. Some of the USA rugby team hung out here later in the evening. After that, I went to Dog’s Nose, a great little hideaway with Japanese snacks, good music, and a couple of craft beers available.

After dinner and a few beers, I took the 9:36pm train back to Tokyo. The entire day was a fun experience. Kumagaya was a great host city for the Rugby World Cup. I’m glad I was able to attend a match there, even though my country lost. If you ever have the chance to attend a Rugby World Cup, or another similar major international sporting event, I highly recommend it! 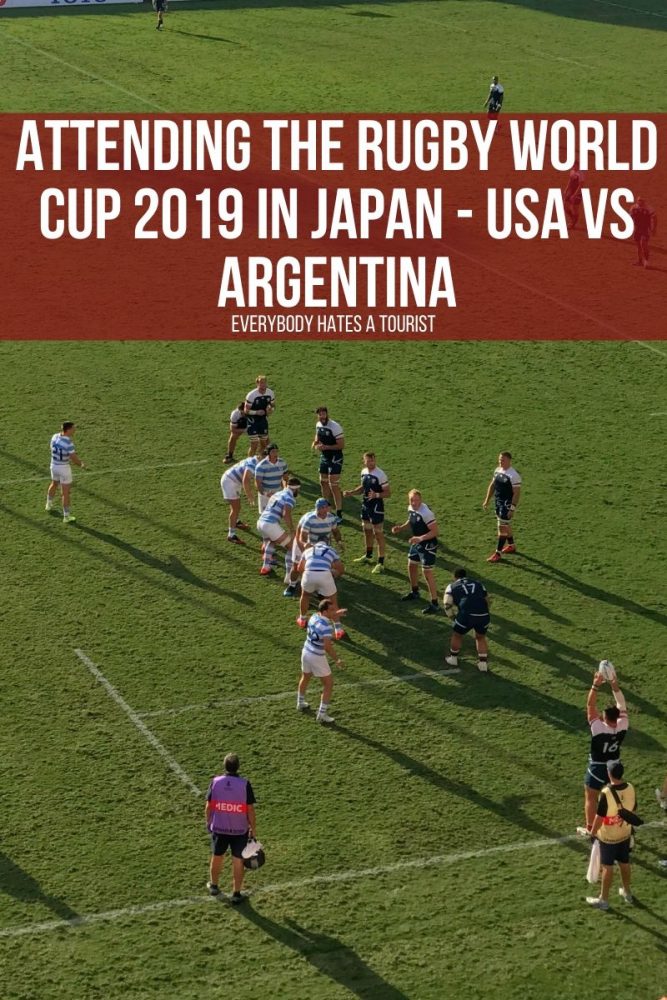