It’s no secret that the Czechs love their beer. The country is quite proud of having created the pilsner style of beer, and rightfully so. Much of the beer sold around the world today descends from Pilsner Urquell, which is still made today in Pilsen. If you enjoy beer at all, a visit to the Pilsner Urquell Brewery in Pilsen is a pilgrimage you must make when you’re in the Czech Republic. 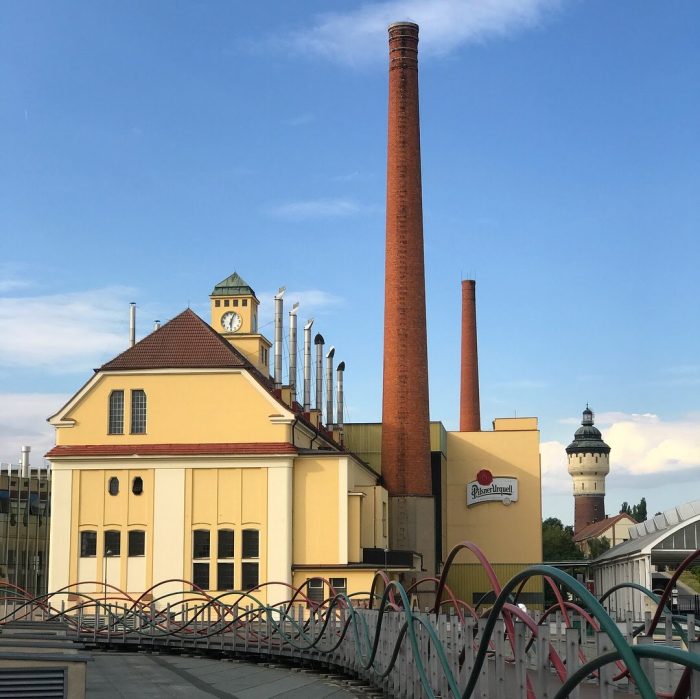 Every beer fan knows what a pilsner is. Considering pilsner & related descendants comprise 70% of all beers, it would be hard not to have encountered them. If you’ve ever had a mass-produced lager that advertises during sporting events, you are familiar with pilsner. It’s a shame that these macro pale lagers are what most people know of pilsner because it really is a style that can be of higher quality than that.

On my visit to Pilsen, I had the opportunity to visit the Pilsner Urquell Brewery, learn about its history, and yes, also drink a lot of beer & eat great Czech food. After all that food & drink, it was convenient that I was staying at the Vienna House Easy Pilsen

, which is located right across the street from the brewery. This is the view from the hotel. 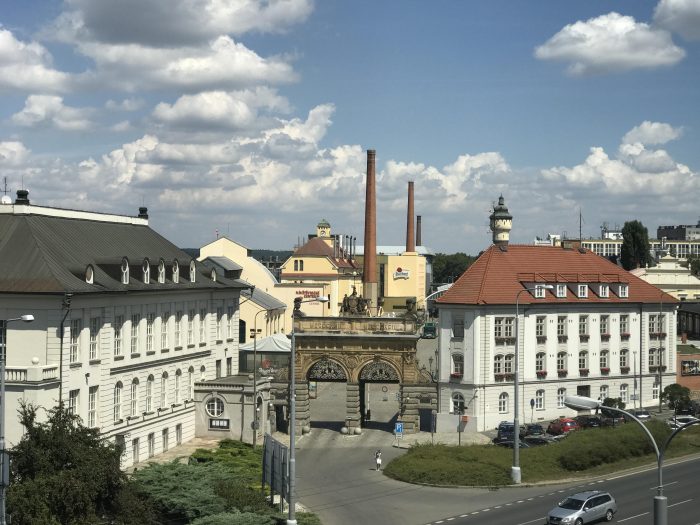 The Pilsner Urquell Brewery complex is massive. It’s a dominant feature of the Pilsen skyline, and then spiders out even further across the city in the below ground cellars. The newest brewery buildings are located at the back of the property, while the more historic places that are the focus of much of the tour, as well as the restaurants, bars, and shops on site are closer to the front. The visitors center is in the original brewery building. That’s where we started our tour. 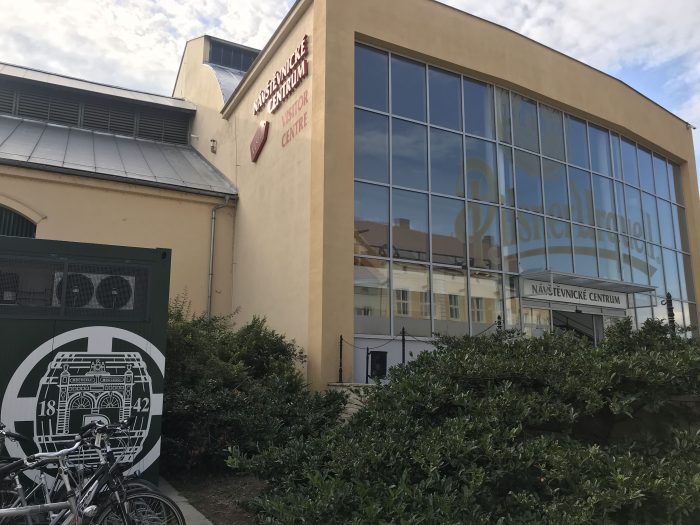 The tours of the Pilsner Urquell Brewery are in-depth. The €10 tour takes 100 minutes, and includes a full tour of the grounds, including the bottling center & cellars, as well as a tasting. Along the way, you learn everything there is to know about the history of Pilsner Urquell & the brewing process.

The name “Pilsner Urquell” translates to “Pilsner from the original source,” which is appropriate since it was the original pilsner. Prior to the creation of the brewery, beer production in the Czech Republic was wildly inconsistent & was of low quality. In 1839, 250 families in Pilsen decided they were tired of drinking crappy beer, and thus commissioned a brewery. The first batch of Pilsner Urquell was released on October 5, 1842. Every year, there is a celebration all over Pilsen on the Saturday following this date. 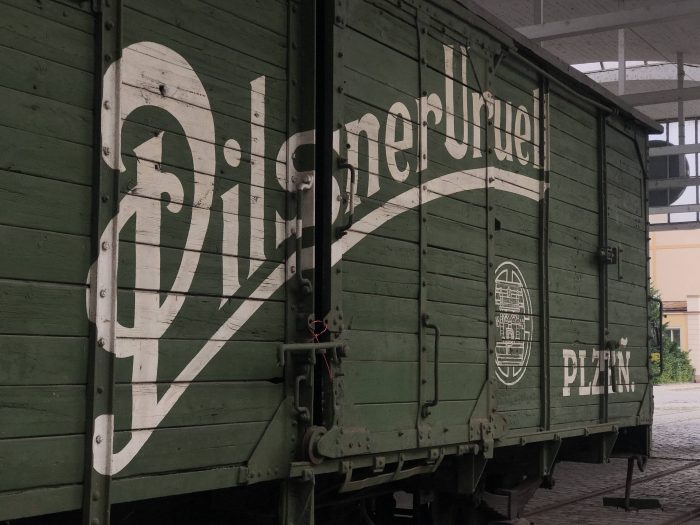 While the brewing technology has evolved, and Pilsner Urquell is now owned by Asahi, the original pilsner traditions are still embraced. The water used for the beer still comes from wells located on site, and the brewery still uses Czech barley, as well as malt from their own malt house.

After a quick tour through the visitors center, we got on a tour bus that took us across the property to the bottling center. 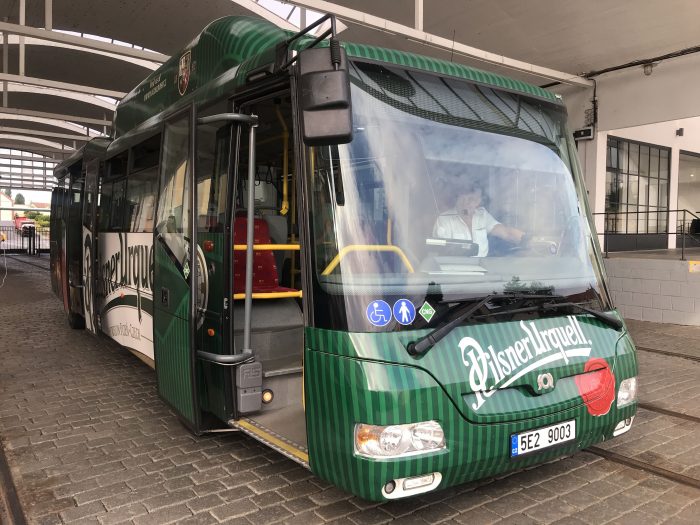 I’m usually accustomed to taking brewery tours at smaller craft breweries. These of course are more intimate, since you can walk around the equipment & be much closer to the whole process. However, if you’ve only ever been on beer tours at microbreweries, there’s something to be said for getting to see this process happen on a larger scale. 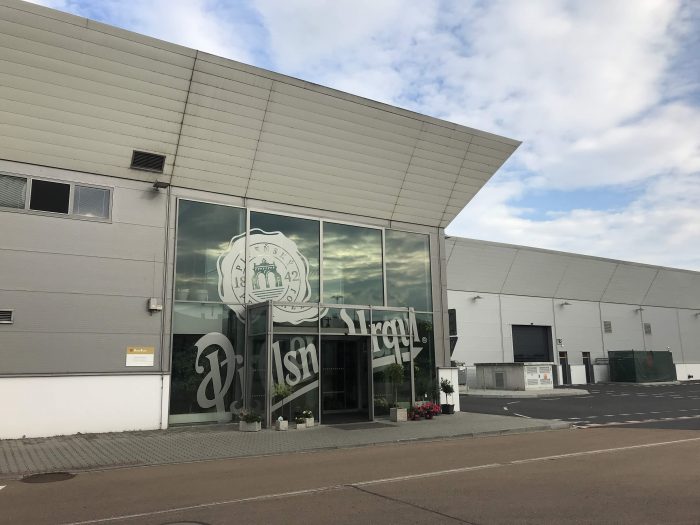 The Pilsner Urquell bottling center is a massive building. The tour takes you to an upper level viewing area where you can look out over all of it. Here glass, used glass, cans, and plastic bottles are all filled with various beers. The remarkable thing is that this entire building is run by just a handful of people who keep an eye on all of the automated machines that do all the work, washing, filling, labeling, and packaging the beer before it’s sent off to thirsty beer drinkers in over 50 countries. The bottling line can produce up to 120,000 bottles per hour when it’s at maximum capacity. 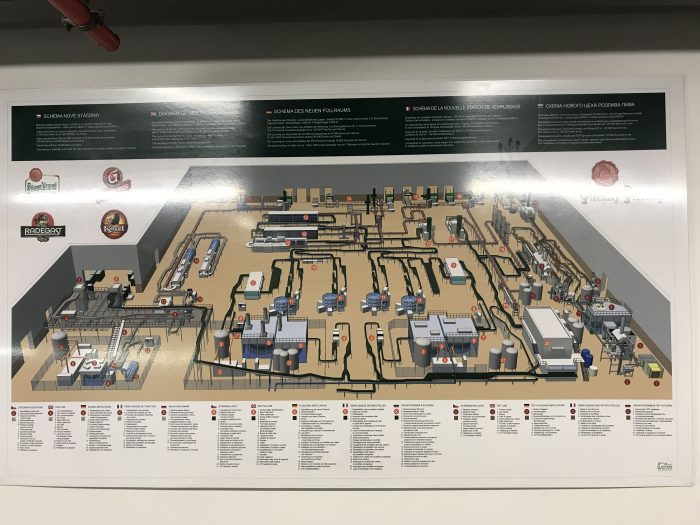 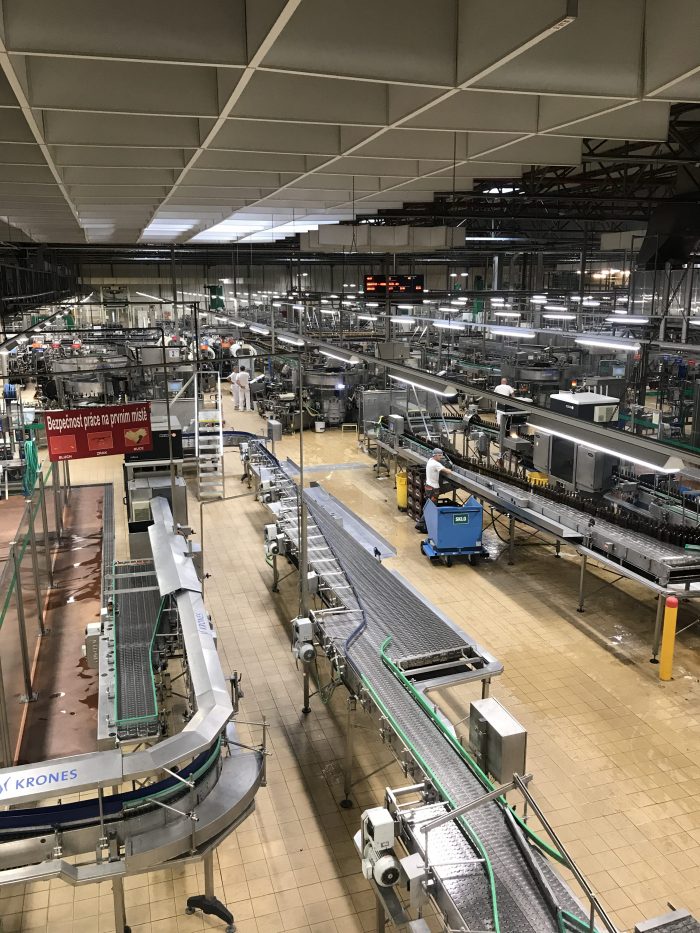 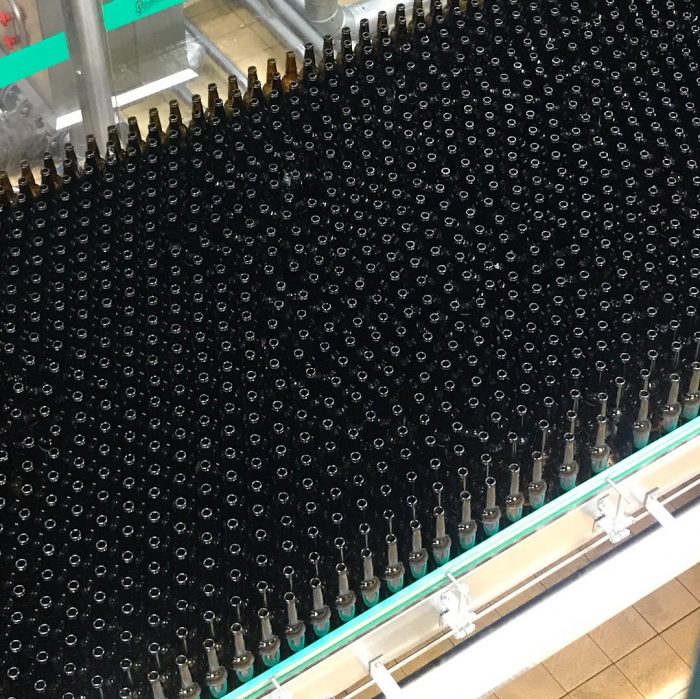 After seeing the bottling center, it was time to head into the brewery & laboratory. We went upstairs in the largest elevator in the Czech Republic to continue our tour. The historic brewery was used by Pilsner Urquell until 2004, when a new brewery was built next door. The tour takes you past the old copper kettles that were originally used in the brewing process, where the beer is hopped 3 times with Saaz hops. 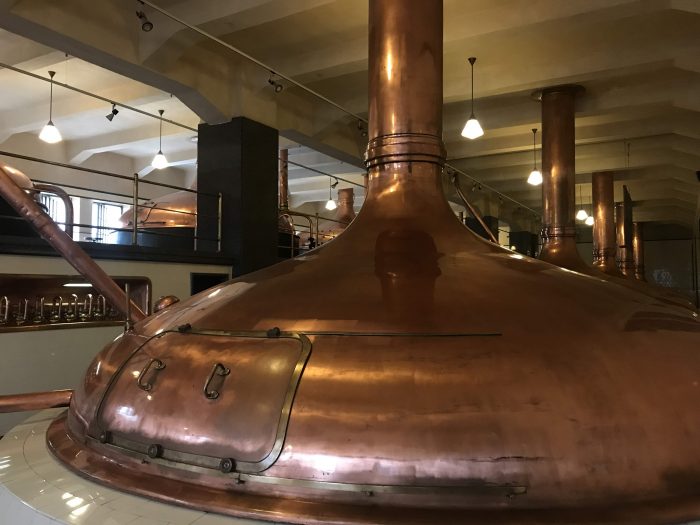 However, even the move to the new, expanded brewery didn’t mean that Pilsner Urquell abandoned its process. They still use copper kettles, but now they are bigger & there are more of them. 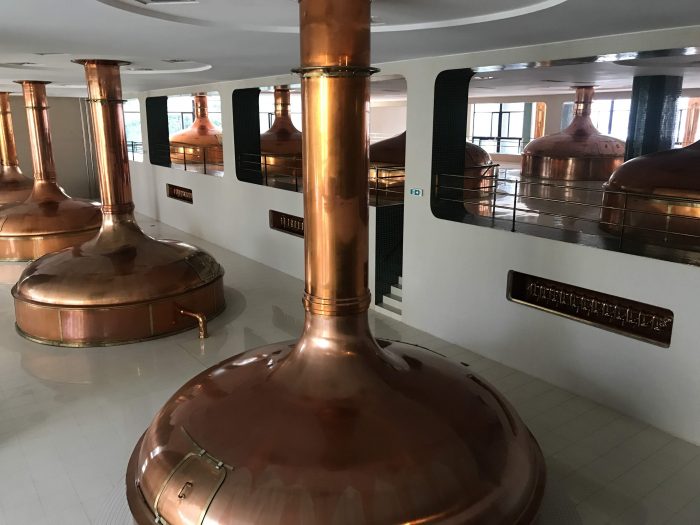 Finally, it was time to head down into the cellars. These cellars stretch 9 kilometers beneath Pilsen. It would be very easy to get lost, so the tour sticks with one portion of the route. On the day we visited, it was 85°F (29°C) outside. The heat was brutal. Our visit to the cellars was a welcome respite, as the underground tunnels maintain a constant temperature of around 46°F (8°C). 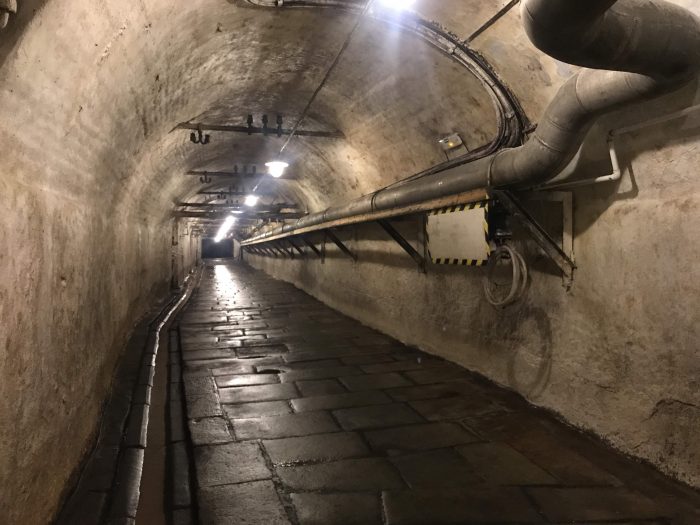 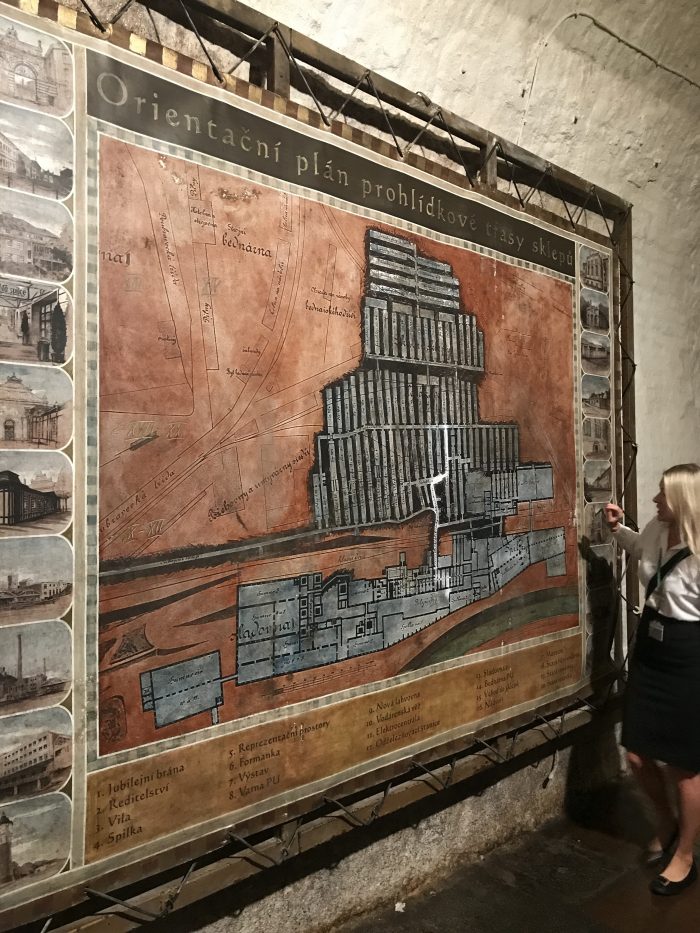 The only major change to the Pilsner Urquell brewing process over the years is that nowadays the aging process takes place in stainless steel tanks, rather than in wooden barrels. However, a small portion of brewing still uses these wooden barrels, and by visiting the Pilsner Urquell brewery you get to try this unpasteurized, unfiltered beer, deep in the cellars beneath the brewery. 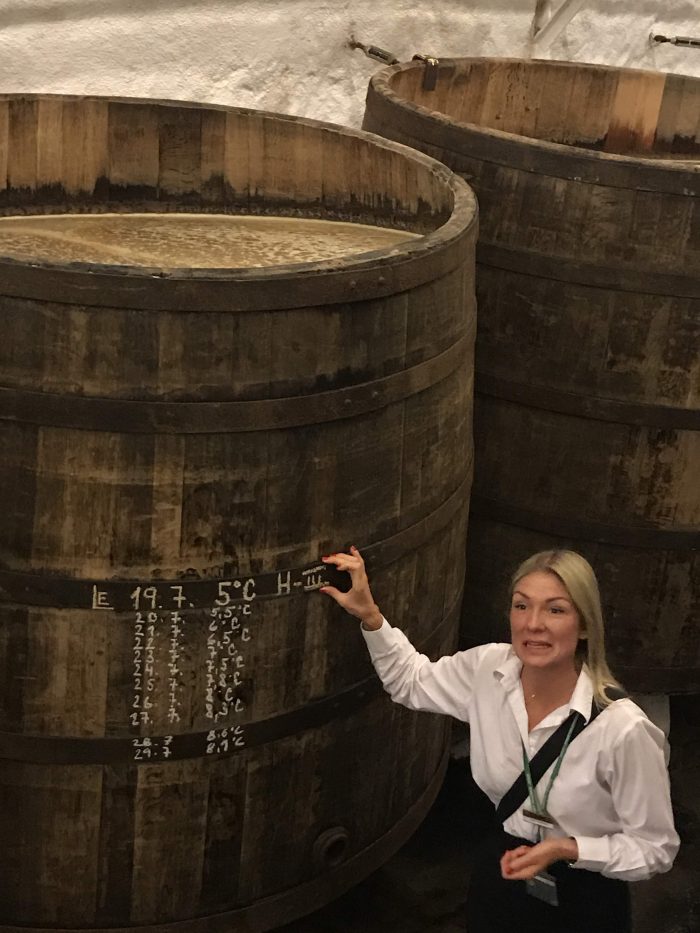 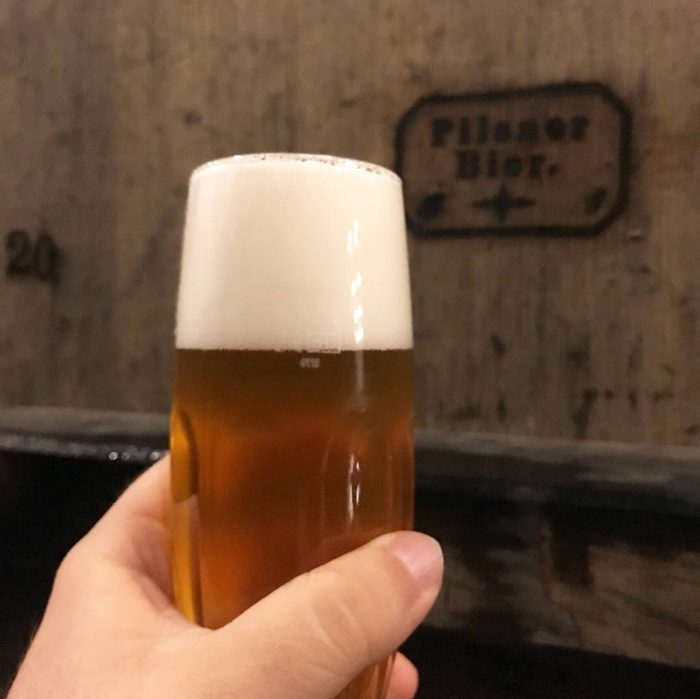 The taste of Pilsner Urquell right out of the barrel is pure magic. This what beer is all about. The freshest possible cold beer on a hot day. It’s nice learning about the history of pilsner & seeing the process of how it is made, but the opportunity to have this fresh beer is the highlight of coming to Pilsen. While you can find unfiltered, unpasteurized Pilsner Urquell around the Czech Republic, and you can even find the tank beer in other places in Europe (I’ve seen it in London), this is the only place where you can have Pilsner Urquell made in the original method straight from the wooden barrels. It is a transcendent experience. If you’re a craft beer fan like I am, you can still enjoy hazy NEIPAs & pastry stouts all you want, but pilsners are what beer is to most people. One pint of fresh Pilsner Urquell, and you’ll remember just how delicious a pilsner can be.

If you find yourself wanting more than one pint in the cellar, you’re not alone. If you’re nice, you just might find yourself able to get a refill. And if you’re particularly indulgent, get together a group of friends & rent the secret dining room in the cellar. In this room, you can have unlimited fresh Pilsner Urquell & Czech food for 3 hours. We would return the next night and do just that. 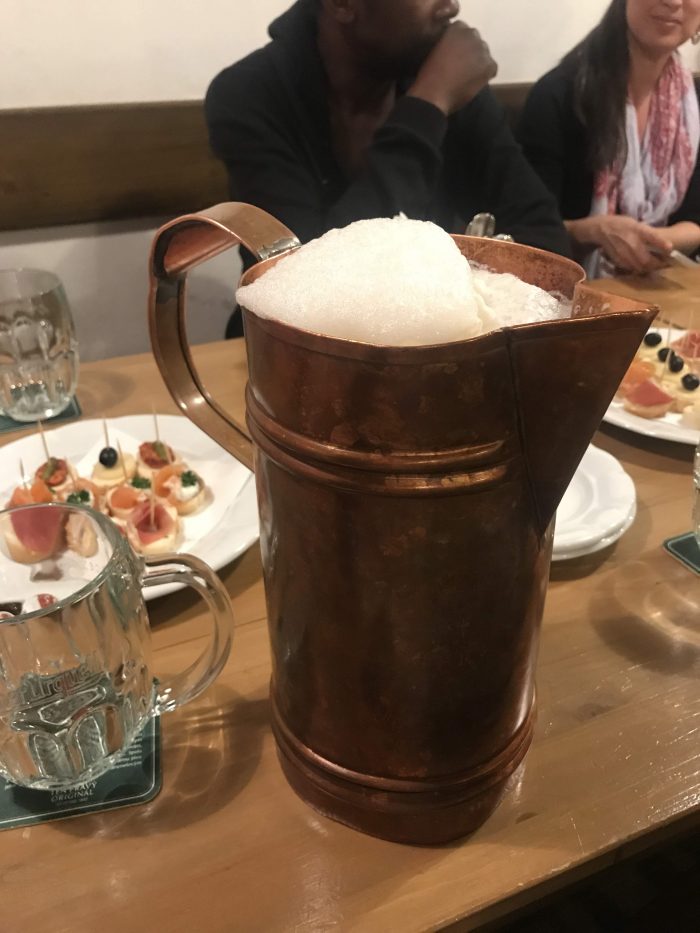 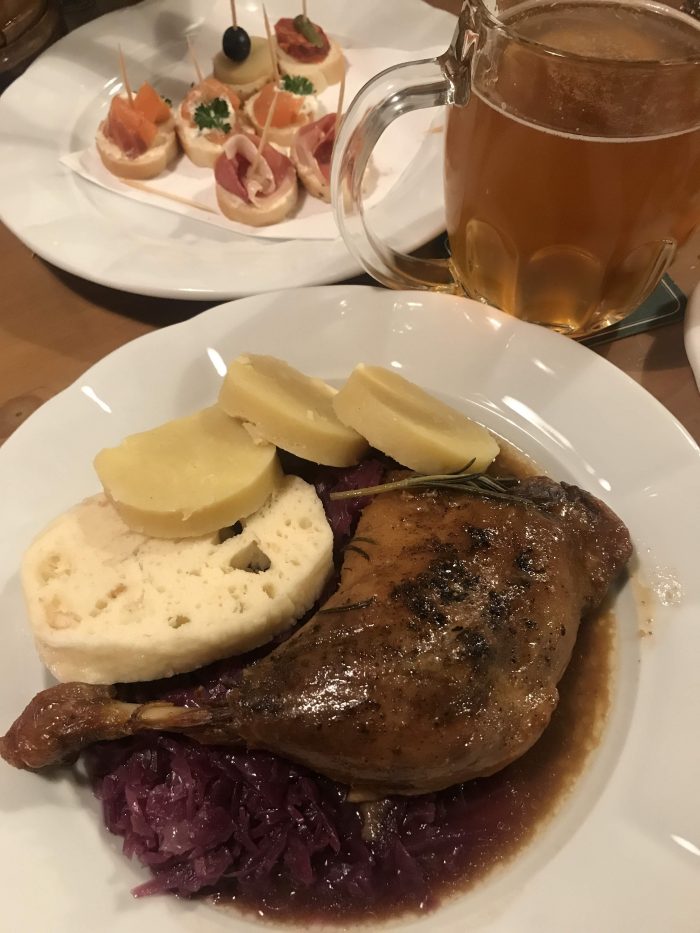 But for today, our tour was over, after heading past the ice cellar, which was in use until 1987. 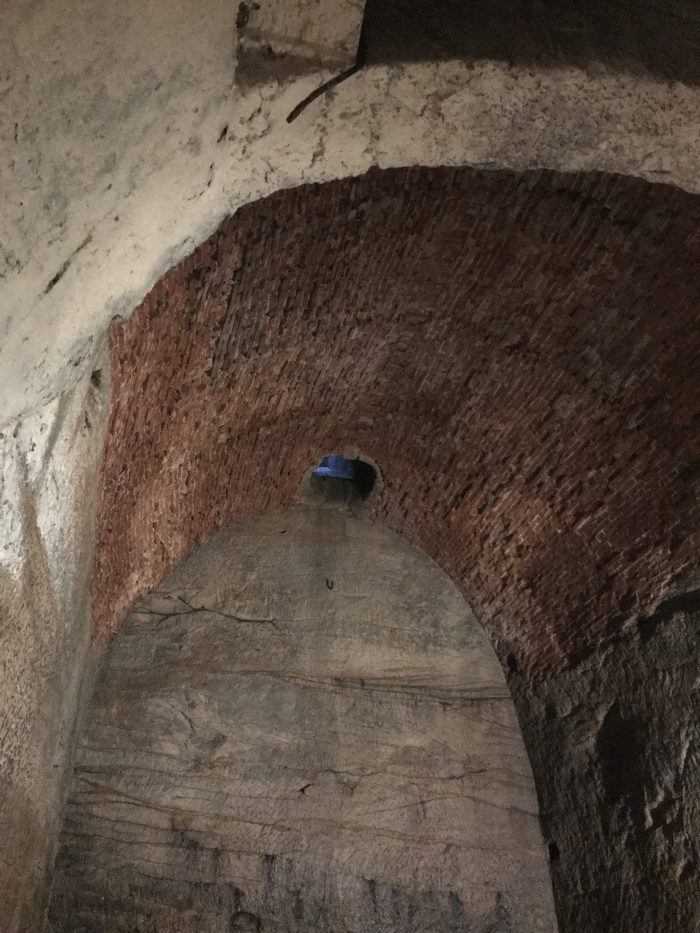 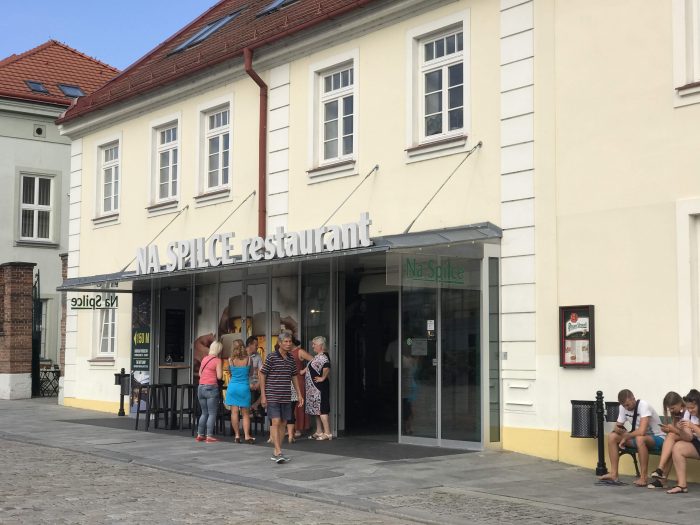 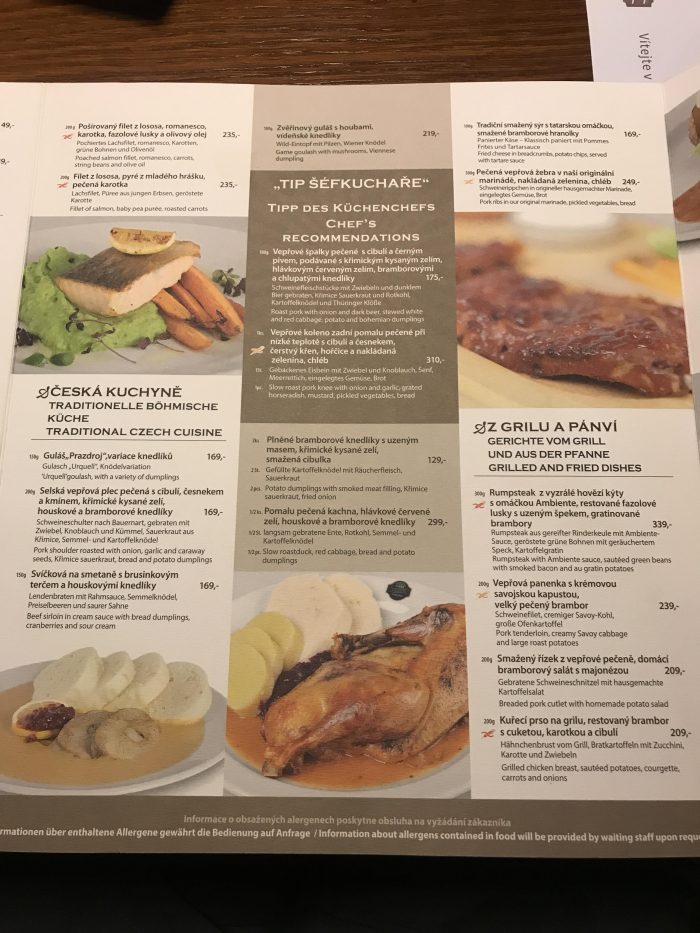 Should this not be enough places to drink onsite, there is also a taproom. In the city center, there is a museum dedicated to beer, along with another restaurant affiliated with the brewery. 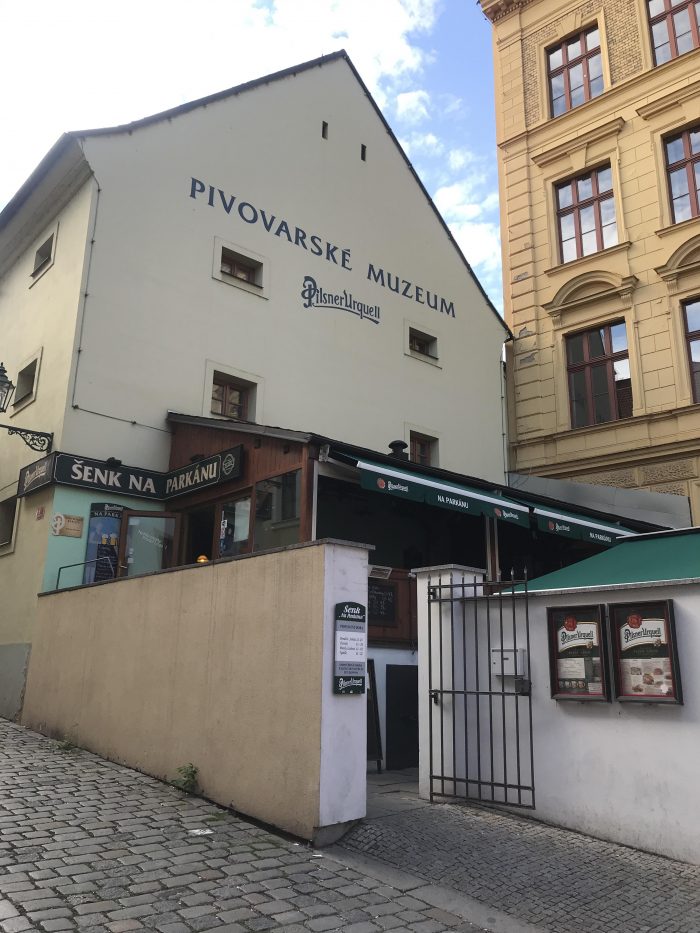 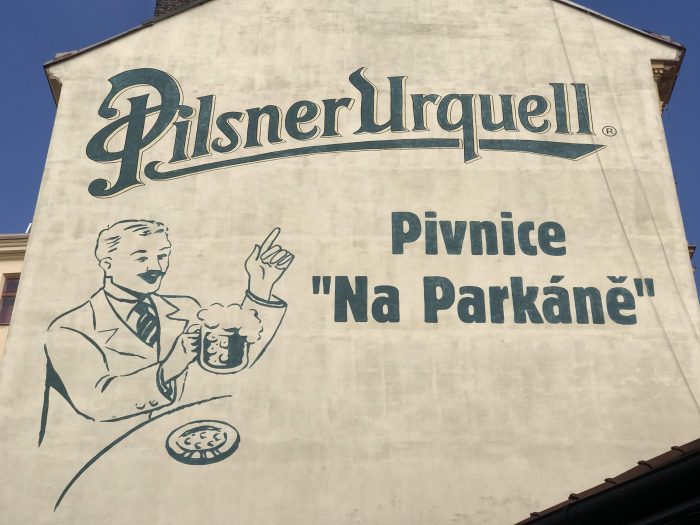 Pilsen is a great cultural city, particularly for drinking. It was named a European Capital of Culture in 2015. Between the brewery, a few quality craft beer bars, and the Bohemia Sekt winery, there are plenty of options to imbibe. A visit to the Pilsner Urquell brewery should be the centerpiece of any visit to Pilsen for anyone who enjoys a good pint while learning about the history of beer.

If you’re interested in taking a tour of Pilsen, check out these tours below:

Yesterday I toured the Pilsner Urquell Brewery, the home of the original pilsner beer 🍻 The highlight was getting to try unfiltered beer directly from the barrel #visitpilsen #visitcz #pilsnerurquell #tbexostrava2018

Disclosure: My visit to the Pilsner Urquell Brewery was part of a press trip to Pilsen following TBEX Ostrava hosted by Visit Czech Republic & Visit Pilsen. All thoughts are 100% my own.