Pittsburgh is a drinking city. For a long time, that has meant large quantities of macro American beers have been consumed, particularly at Steelers, Penguins, and Pirates games. However, Pittsburgh is gradually growing an increasingly robust craft beer scene. A few initial pioneers have led to more and more new breweries being opened, with the newest spots rapidly growing strong reputations & long lines to match. Here are some of my favorite places to drink craft beer in Pittsburgh.

We’ll begin our tour of the Pittsburgh’s best craft beer bars on the South Side, where I have stayed when I have frequently travelled to the city for work. The bars on the South Side can range in quality and atmosphere, but there are a few places in particular where you can find a nice beer selection.

Carson Street Deli has 20 taps of beer, plus a couple of casks. There’s also a fantastic bottle selection both for drinking there & taking away. I found this particularly appealing when visiting on my first evening in Pittsburgh so I could then stock my fridge for the rest of the week.

To go along with this beer, as the name suggests, the bar has great sandwiches as well. Primanti’s might be more famous, but Carson Street Deli has far better sandwiches, even if they’re not stuffed with french fries. The menu ranges from Italian to BBQ, so there’s something on there no matter what you’re in the mood for. 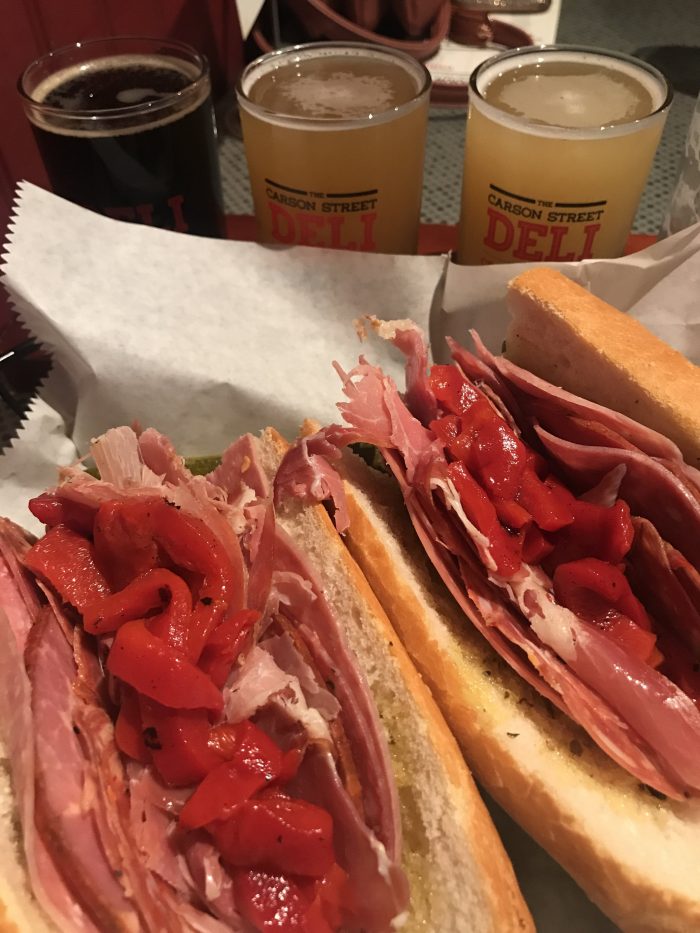 The staff at Carson Street Deli has also gone out of their way to be friendly. On one visit I was happily welcomed by Mike, the owner, while on another, one of the bar staff allowed me to quickly get a beer in while buying some bottles even though they were about to close.

While Fat Head’s is from Cleveland, it would be remiss to not include it on this list, as their brewpub on the South Side is one of the most popular bars along Carson Street. The bar features over 40 taps, plus classic Pittsburgh bar food. 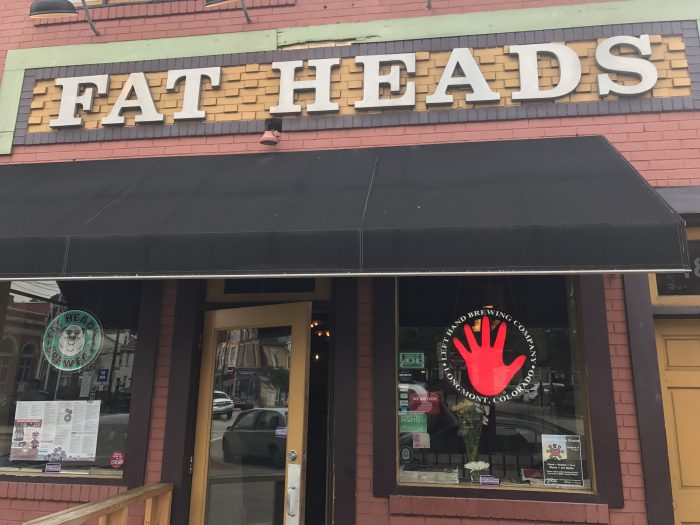 Also, it’s the only bar so far where I’ve had someone try to fight me. 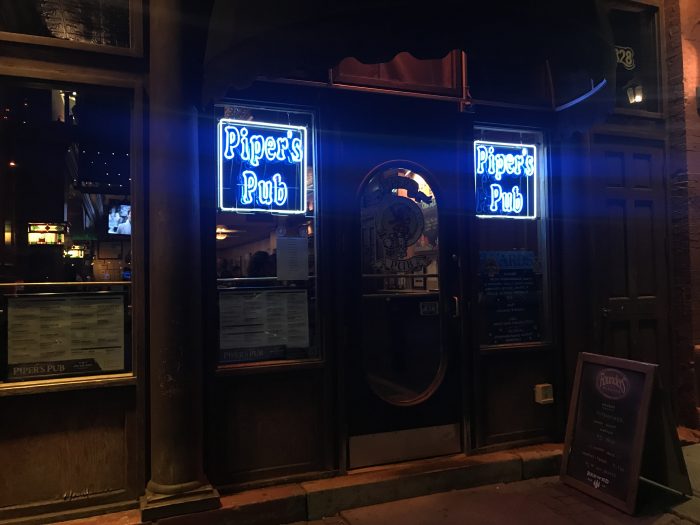 From the outside, Piper’s Pub looks like the average South Side bar, so I had walked past it on a few occasions. Luckily, I met a guy in another bar who tipped me off to the solid tap selection inside. This unassuming bar has one of the best craft beer selections in the area. 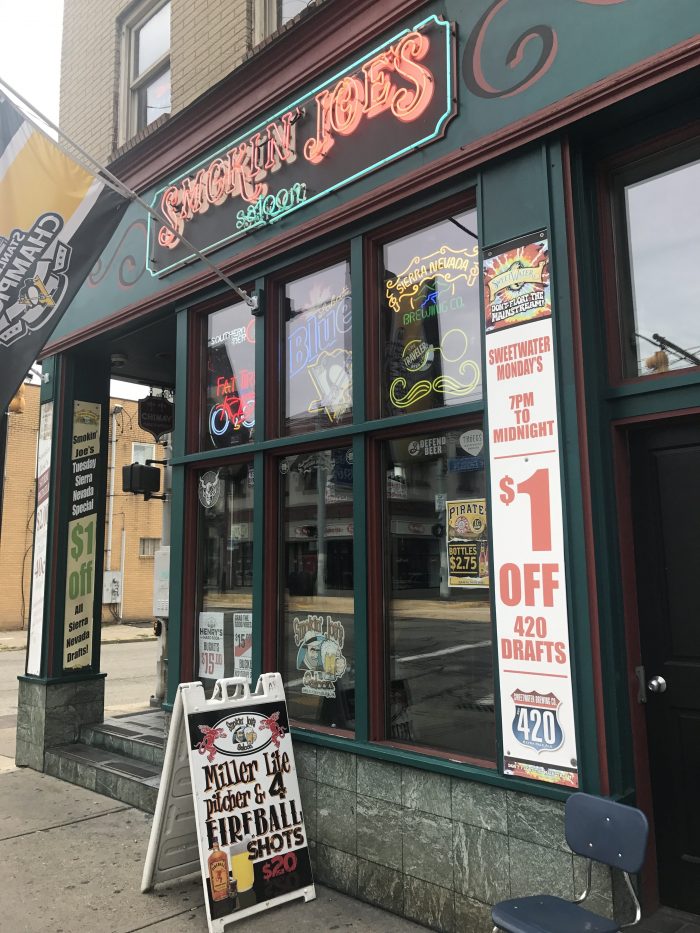 Smokin’ Joe’s Saloon is a similar bar that would be easy to overlook from the outside. Ignore the signs & posters for macro lagers, and instead check out the huge list of craft beer on the wall. As with nearly every bar in Pittsburgh, they also do basic bar food well.

The Library is one of my favorite craft beer bars on the South Side of Pittsburgh, partially because it has late hours, cheap prices, and good fried bar food. I’m partial to the fried cheese, as well as the chicken strips. 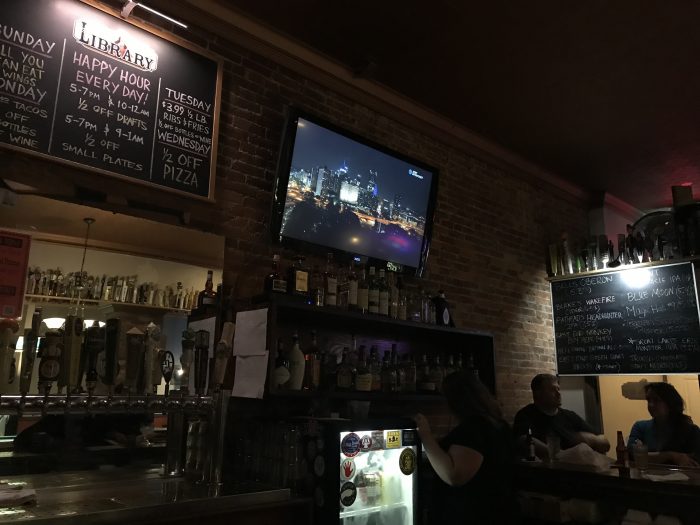 The Library has 12 taps, plus a small bottle selection, most of which are constantly rotating. It’s not a massive selection, but each time I have visited there has been at least one highly-sought-after beer available. The pricing has changed a bit in recent visits, but The Library is still a fantastic spot for an early or late happy hour. The atmosphere tends to be a bit more chill than other bars on Carson Street. They also have a trivia night, which I nearly won by myself on my last visit.

Over The Bar Bicycle Cafe

OTB Bicycle Cafe is another good spot for a quiet pint. The bar specializes in burgers, but there is also a small rotating selection of craft beer available, including 8 taps plus several dozen cans & bottles.

My last recommendation for craft beer on Pittsburgh’s South Side is Acacia. From the outside, it looks like there’s nothing there, thanks to the Prohibition speakeasy theme. Acacia specializes in cocktails, which I highly recommend. However, if a well-made, balanced, creative cocktail is not your thing, they also have a small selection of craft beer available. I’m including them on this list solely because of the rare Dogfish Head beer tap takeover they hosted on one of my visits.  This is a place to come for quality, in an atmosphere that is unlike the brotastic sports bars that fill much of the rest of the neighborhood.

Now it’s time to move across Pittsburgh to the North Shore, where the Steelers & Pirates play, and there are also a few good craft beer bars to visit before or after a game. 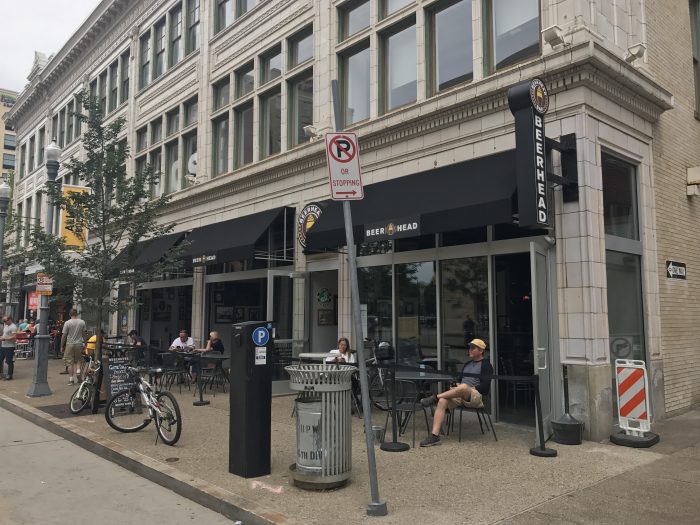 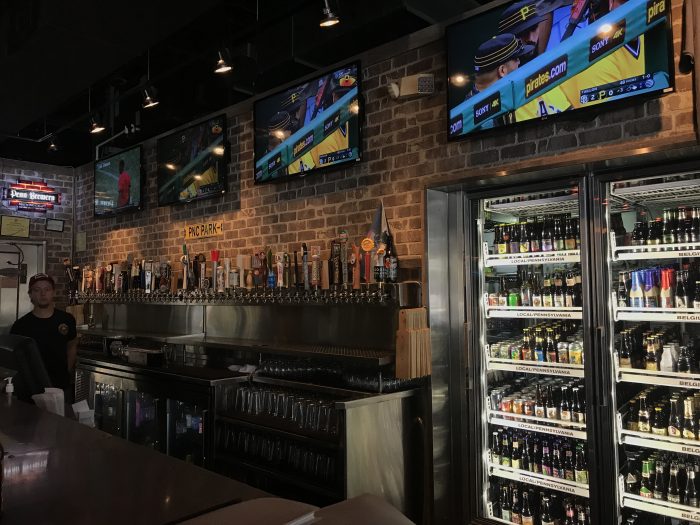 One of the largest selections of craft beer in Pittsburgh can be found at Mike’s Beer Bar, which is located across the street from PNC Park. The bar has 50 taps, plus hundreds more cans and bottles. The menu ranges from one of the best selections of local beer in town to a large European selection. While it’s not an area you’re likely to be unless you’re attending a game, it’s worth the detour. The place is busy before or after games, but I once visited during a Pirates game & there were only a couple of other patrons inside.

Next, let’s head north along the Allegheny River. On the north side of the river is Penn Brewery, one of the oldest craft beer breweries in Pittsburgh.

The south side of the river has many more bars, markets, & restaurants in an area called The Strip. Here you’ll find The Beerhive, a gem of a dark bar. 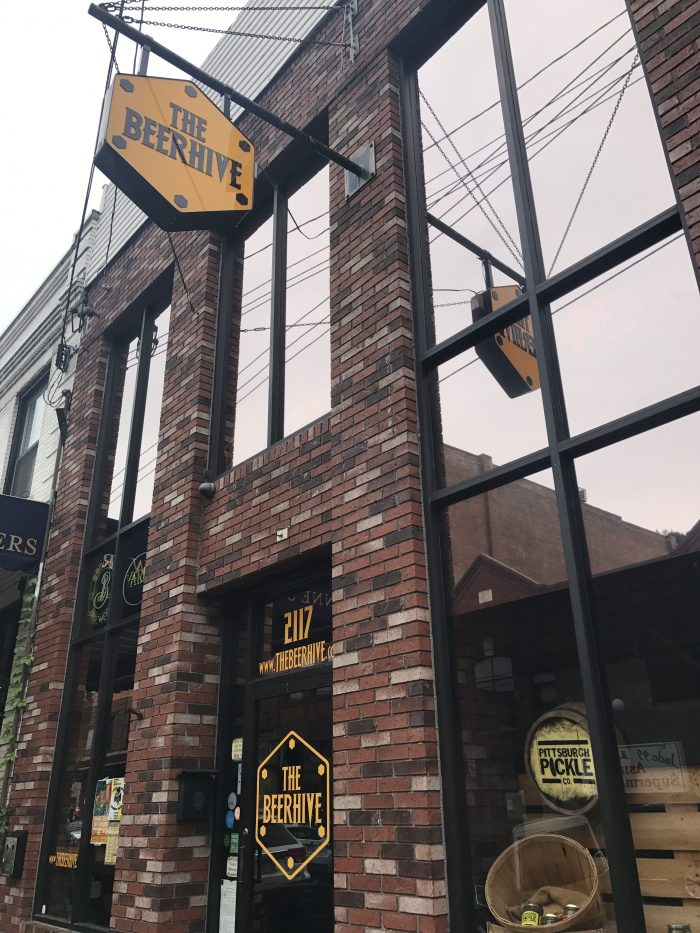 The Beerhive has 12 taps, about half of which are local, plus some good bottles and cans. 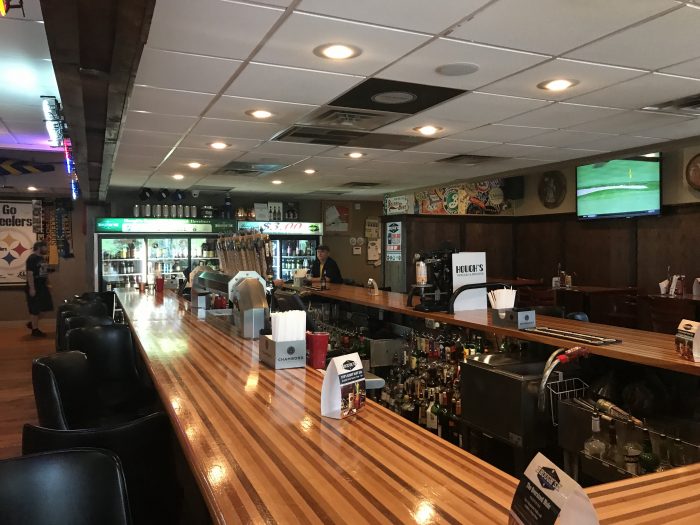 Jumping back to the east side of Pittsburgh, we head to the Greenfield/Squirrel Hill area. Here you will find Hough’s, which has one of the largest selections of craft beer in Pittsburgh. The bar has about 45 taps, plus hundreds of bottles. There’s also a solid menu of typical Pittsburgh bar food such as pierogies.

Despite what the name might suggest, Independent Brewing Company isn’t actually a brewery, but rather a great bar featuring a curated list of 14 rotating taps plus around a dozen hard-to-find bottles. The name comes from a cartel of local Pittsburgh brewers who made beer prior to Prohibition. 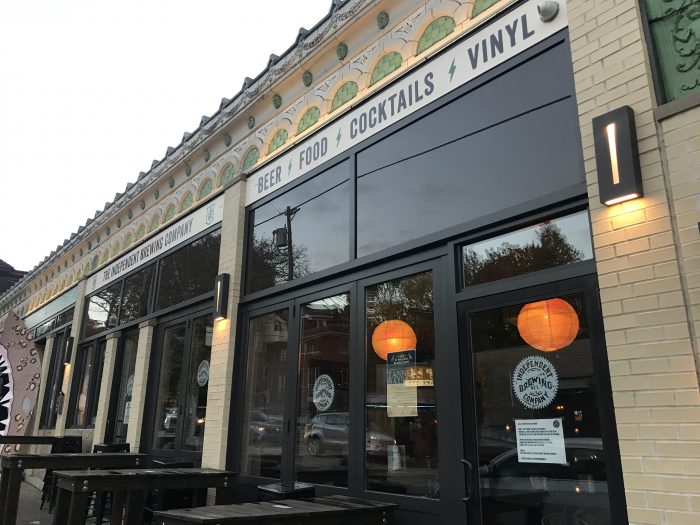 The tap list at Independent Brewing Company generally focuses on beer from Western Pennsylvania, but there are a few European highlights as well. On my first visit, I was introduced to the stellar local brewery Dancing Gnome, which I will get to in a minute. 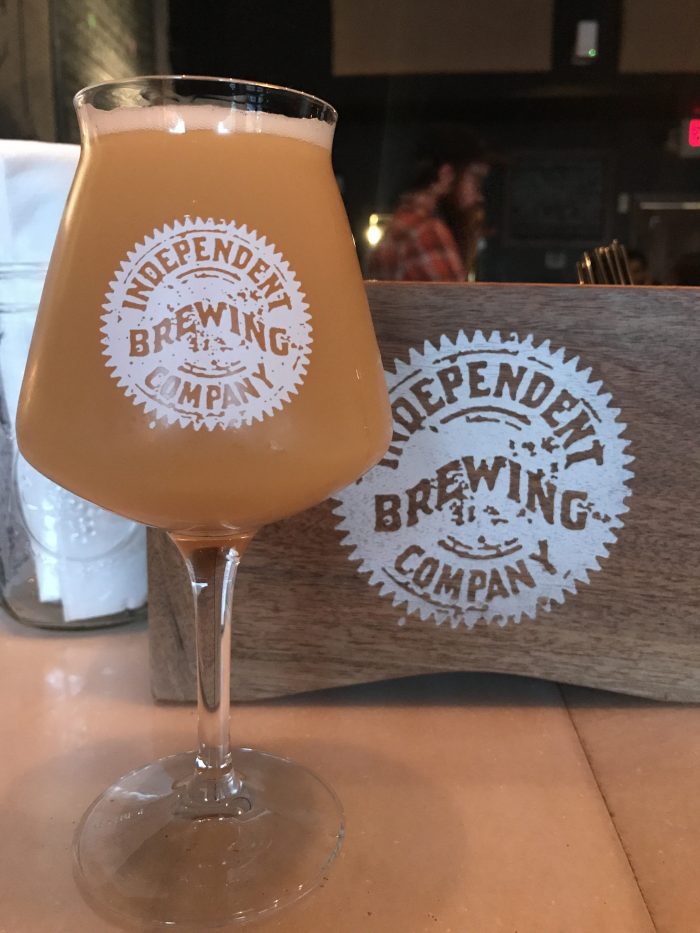 For non-beer drinkers, there is a solid cocktail menu as well. The food menu is also great, including several vegetarian and vegan options.

Independent Brewing Company manages to find that perfect balance between being a cool place where hipsters hang out & listen to vinyl, while also still feeling like a casual neighborhood bar. This is the sort of place that every city should have – a welcoming, high-quality, non-pretentious spot that is showcases the best of the region.

The best breweries in Pittsburgh 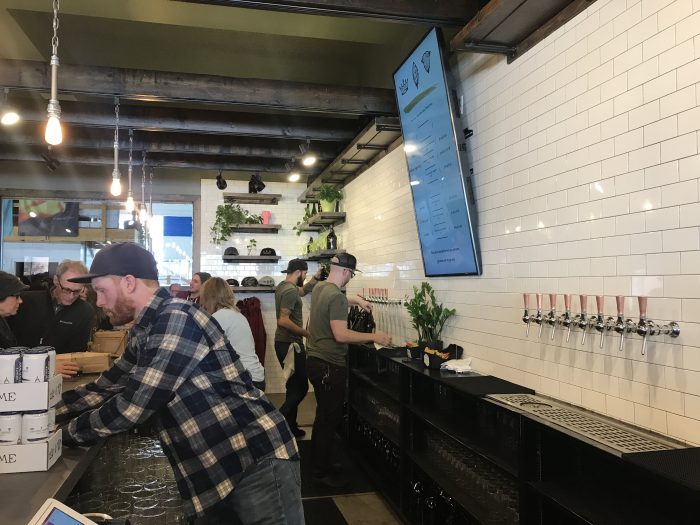 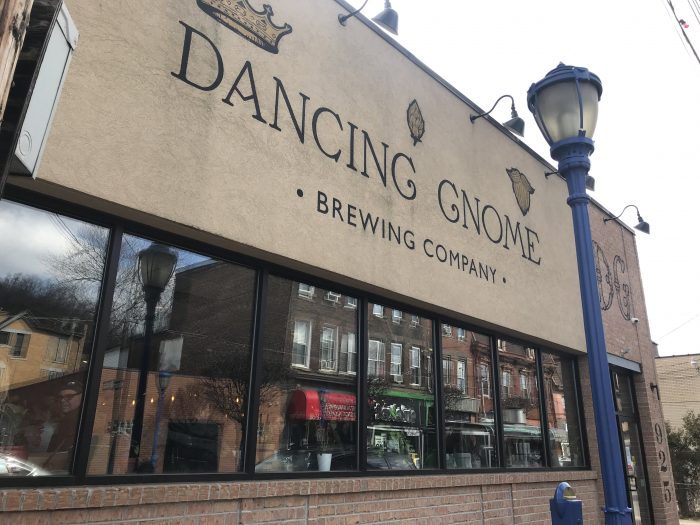 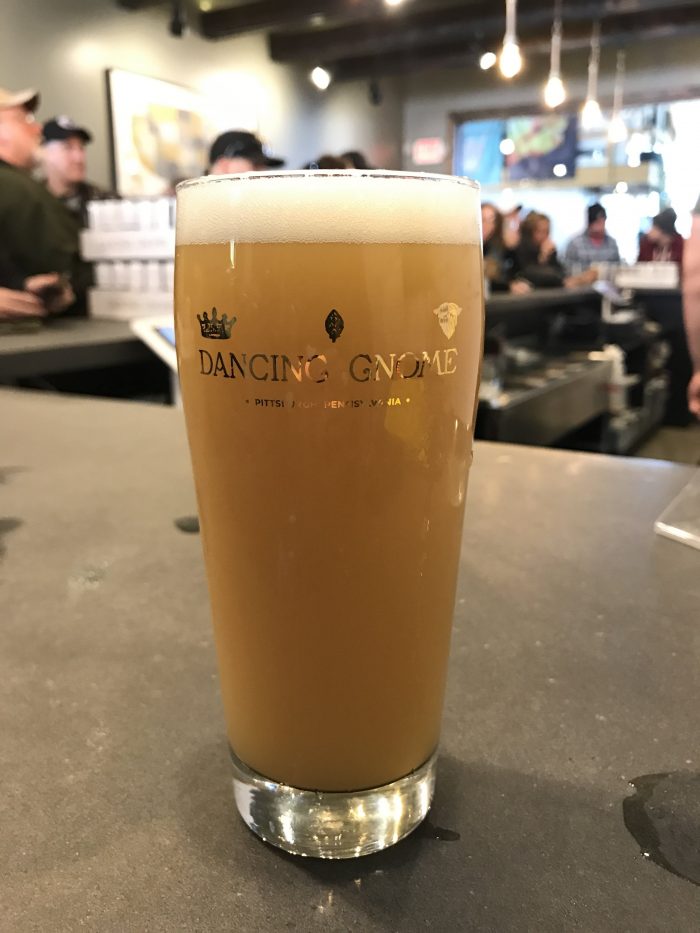 North of downtown Pittsburgh, Sharpsburg is home to two of the newest & best breweries in Pittsburgh. Dancing Gnome has only been open since late 2016, but they are quickly growing both in size & reputation. The brewery specializes in hazy, citrusy NEIPAs, with can releases resulting in lines stretching down the block.

As of now Pittsburgh’s reputation for beer doesn’t stretch far outside the city, but Dancing Gnome is going to change that. I’m glad that I stumbled upon their beer at Independent Brewing Company. That’s the value in bars that support local beer from brand new breweries.

If you’re in Sharpsburg to visit Dancing Gnome, don’t miss out on Hitchhiker Brewing. While it might not yet have the reputation of Dancing Gnome, the two breweries make for a great afternoon out. Hitchhiker’s beers are more experimental, plus they have a wider tap selection. 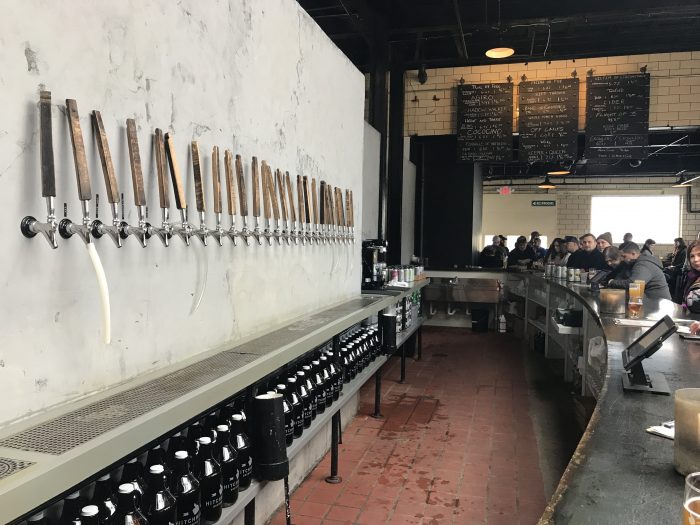 The building was actually the old Fort Pitt brewery, so it has been returned to its original purpose by Hitchhiker, who reopened the building in 2017. They also have a tap room at their original location in Mt. Lebanon. 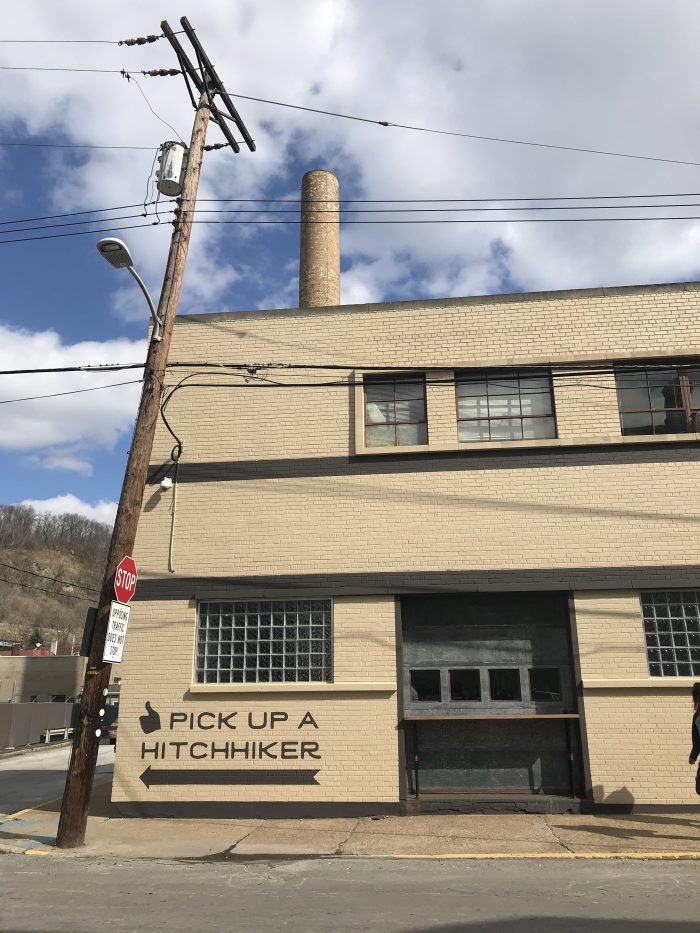 North of The Strip is Lawrenceville, one of the biggest hipster areas in Pittsburgh. Along with hipsters, you also get breweries. One of the more unique brewery buildings I’ve encountered is The Church Brew Works, which has revitalized an old church for the holy purpose of making beer. 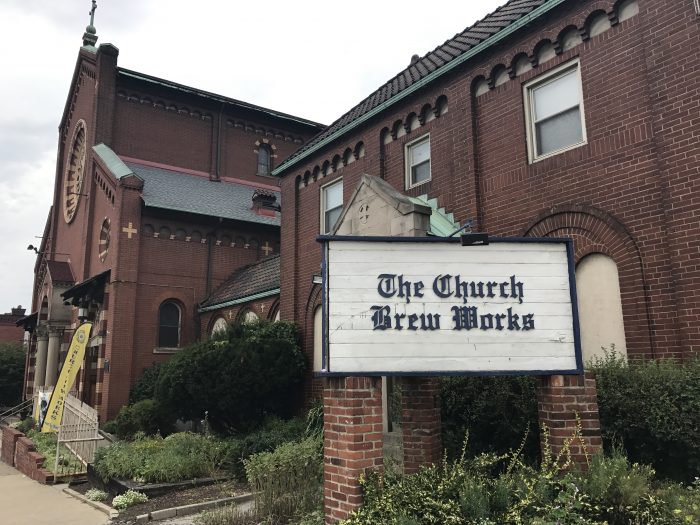 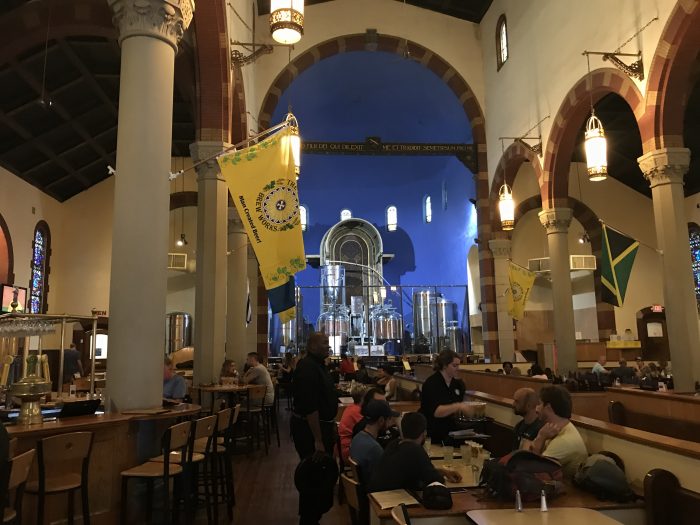 The spacious building holds not only the brewing operation, including the large brew tanks, but also a bar that sells 8 taps of their own beer. 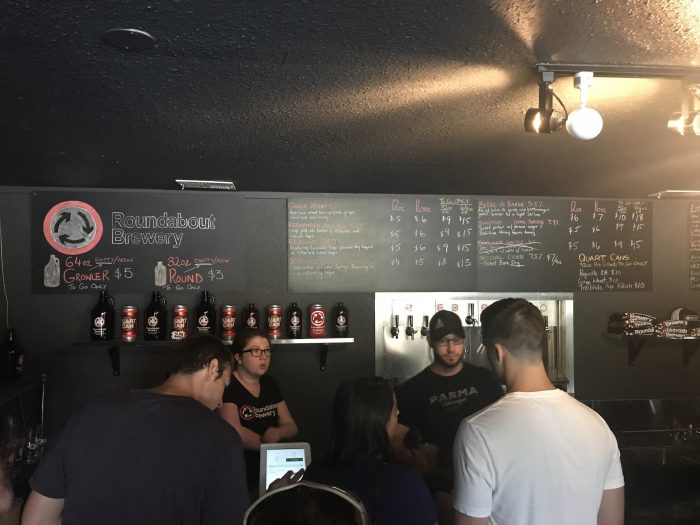 Further north, after you’ve passed Bierport, a solid bottle shop, is Roundabout Brewery. Roundabout features 8 taps of their own beer, plus New Zealand-inspired pies, which are always a welcome addition to any menu. North of Roundabout is Hop Farm Brewing Company, which I have not yet been to since their opening hours are more limited.

Across the river from Lawrenceville is Millvale. Millvale is home to a couple of breweries that are worth making a detour to check out. 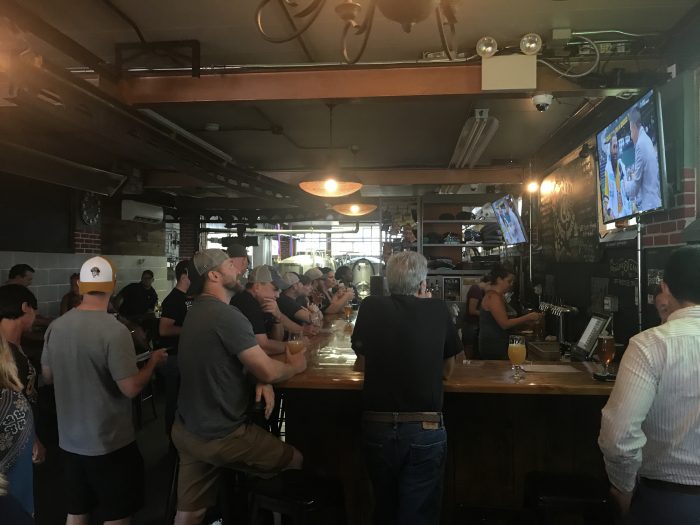 The largest of these is Grist House, one of my favorite breweries in Pittsburgh. Grist House was founded by two brothers-in-law in 2014 in an old slaughterhouse. It’s a cool old building. On a sunny day, the crowds spill out onto Grist House’s patios. 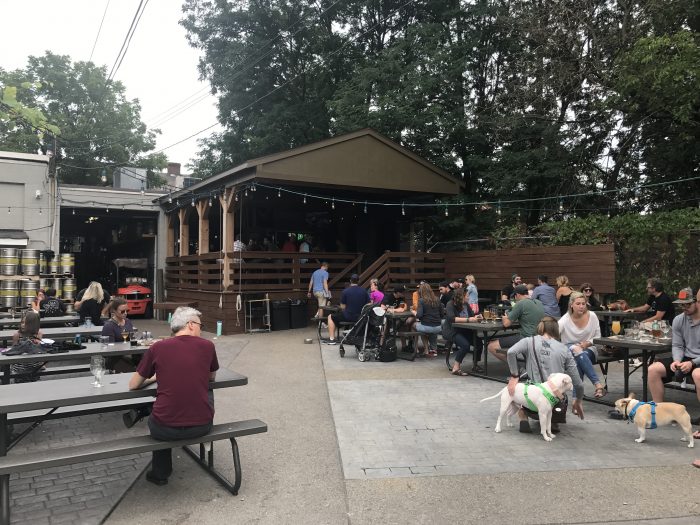 It’s a huge place, with a great rotating selection of their own beer on 12 taps. Local food trucks also stop by on a rotating schedule.

The other brewery in Millvale is is Strange Roots Experimental Ales. As the name suggests, this is the place to go for small batch beers, especially sours. The brewery has recently changed its name, previously being known as Draai Laag. With the name change has come an expansion of styles, but they will continue to make some of the farmhouse beers they have become known for. 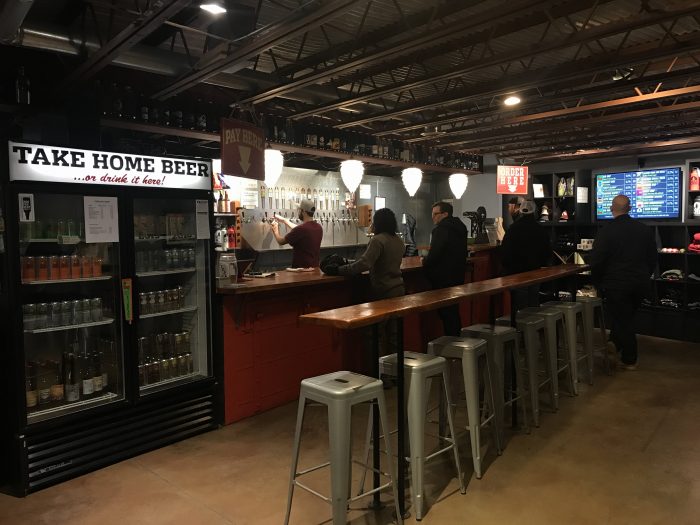 In 2004, East End Brewing Company was one of the first Pittsburgh craft breweries to open its doors. You’ll find their brewery in an industrial area near East Liberty, Shadyside and Bakery Square, featuring 13 taps of their own beer, with bottles, cans, and growler fills to go. There’s plenty of space outside, with pinball & foosball inside. East End also has a tap room in The Strip.

One of the newest additions to Pittsburgh’s beer scene is from New York’s Southern Tier Brewing. Their brewpub occupies a convenient location in between PNC Park & Heinz Field. As you’d expect, there are plenty of TVs showing sports, and the place is packed before and after games. 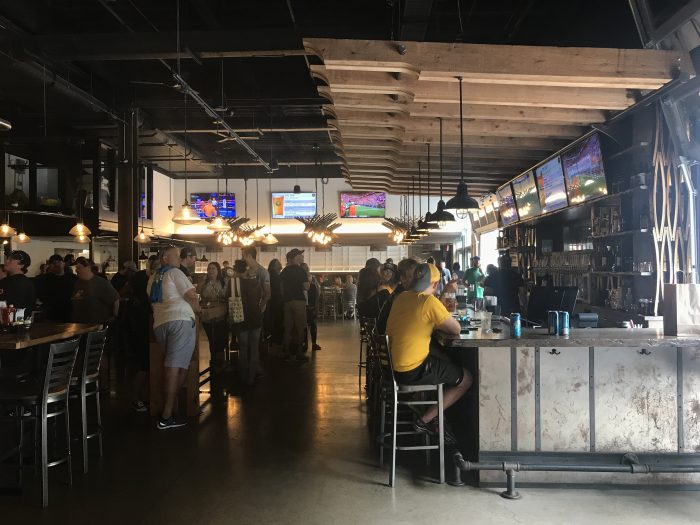 Southern Tier has 24 of their own beers on tap, plus another 6 rotating guests. They also serve their own spirits. One slight demerit: beer being served in plastic cups, though this is somewhat understandable due to the crowd spikes around events.

While I haven’t yet had a chance to visit them, there are a couple of other breweries just outside central Pittsburgh that also have great reputations, Voodoo Brewery in Homestead, and Brew Gentlemen in Braddock.

Pittsburgh’s rising craft beer scene might be fairly new, but the recently opened bars & breweries are going to make it a must-visit beer destination in the coming years. Given how much craft beer in Pittsburgh has evolved in the last couple of years, it’s going to be exciting to see what the future holds.