I got a late start on my second day in Hong Kong, since I had to do some work. I tried to go to a clay pot restaurant near my hotel, which first was hard to find, then once I found it, I learned that they only do clay pot after 6pm. Instead, I stopped at a Chinese bakery called Kam Ngar and got a pork bun, along with a ham & cheese roll. 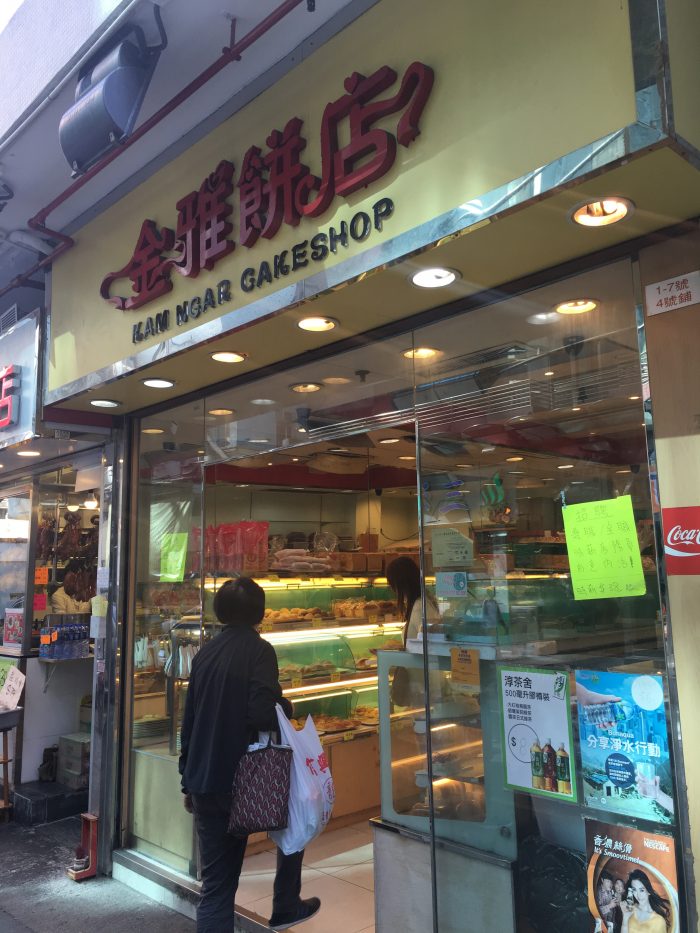 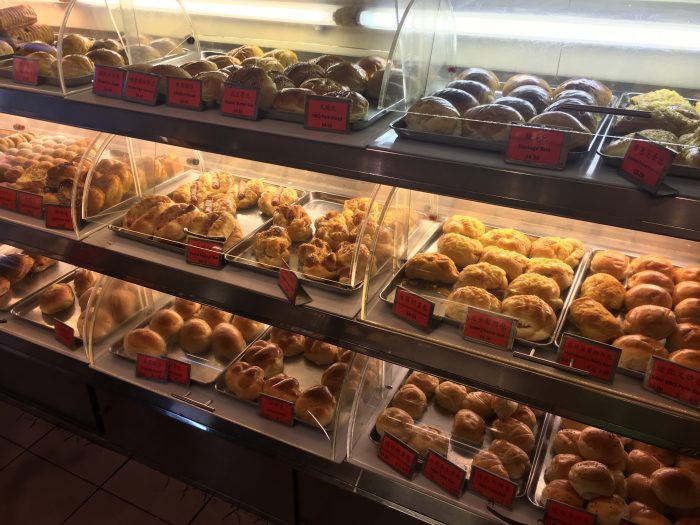 Since it was supposed to be the clearest day during my time in Hong Kong, I figured it would be the perfect time to take the tram up to Victoria Peak & enjoy the views over all of the islands. 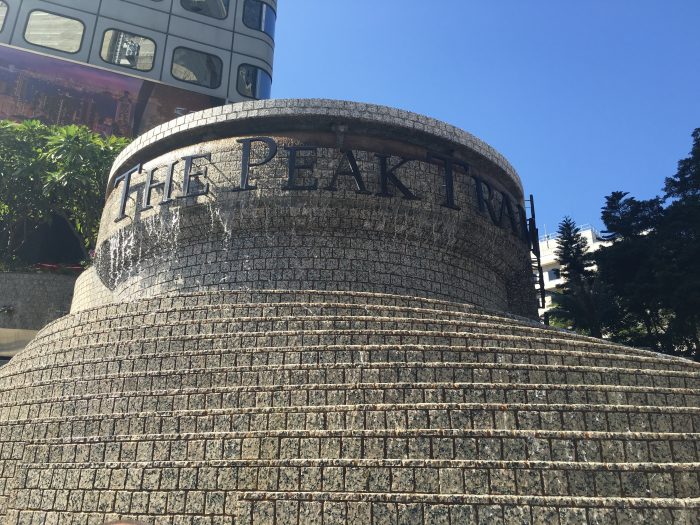 There was a long wait for the tram, but the line moved fairly quickly. It was much more pleasant once I was out of the bright sunshine and in the shaded areas closer to the entrance. There were taxi drivers trying to convince people to take a taxi to the top instead, but I like trams & funicular railways, and I wasn’t in a hurry. It took about 25 minutes to get to the ticket window from the end of the line, and then a further 20 minutes to get on a tram, as they run every 8 minutes. There is a historical gallery that you walk through as you approach the tram, but since you’re in a queue, it’s not easy to browse. 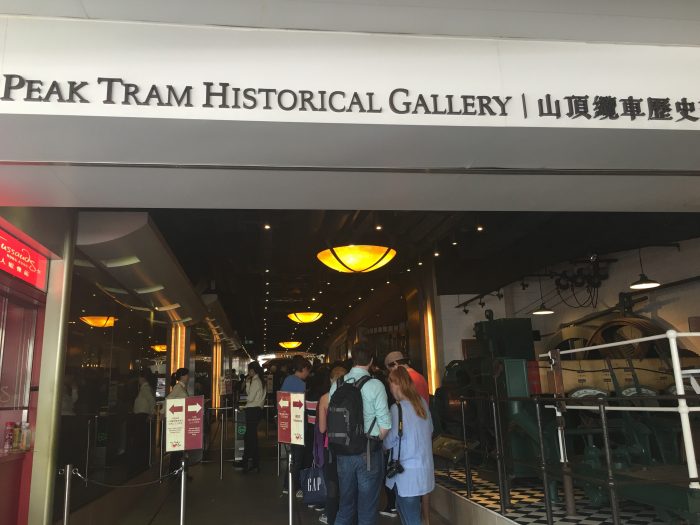 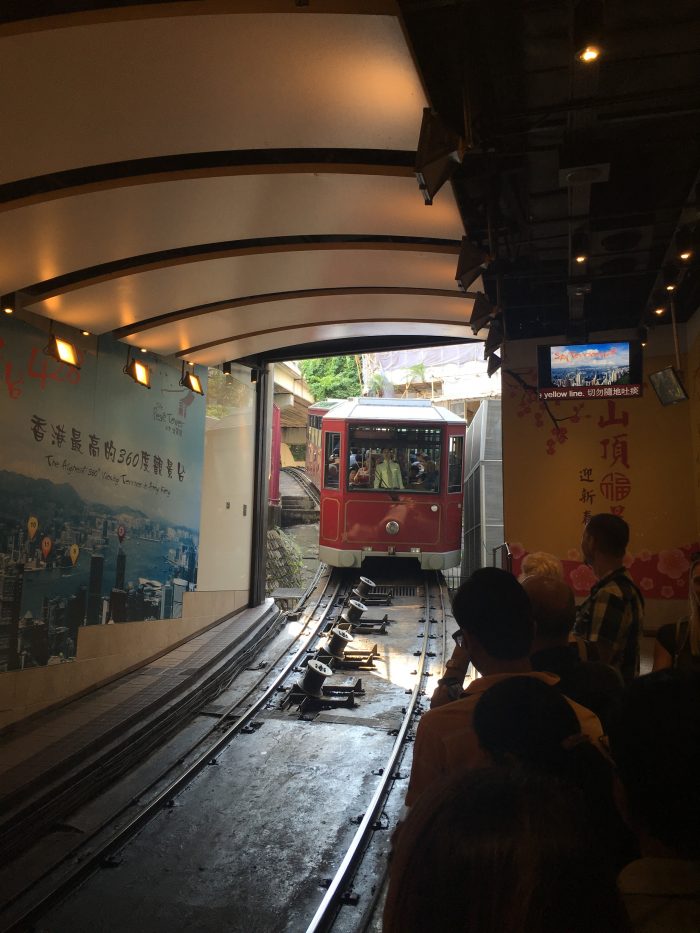 There are a couple of options for tickets up to the top of Victoria Peak by tram. For 83 HKD (around $10 USD), you get a return ticket on the tram, plus entrance to the 360 degree sky terrace viewing terrace as part of the Peak Tram Sky Pass. If you want to skip the viewing terrace, you can just do the tram for 40 HKD. I figured that since I was going up there, I might as well do the whole thing since it was only $5 USD more. 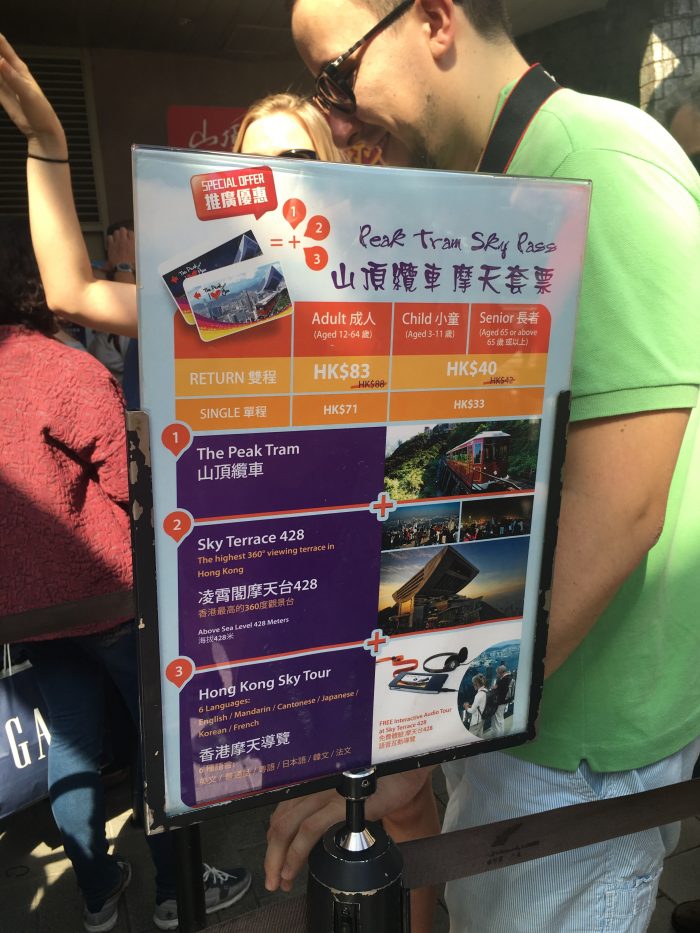 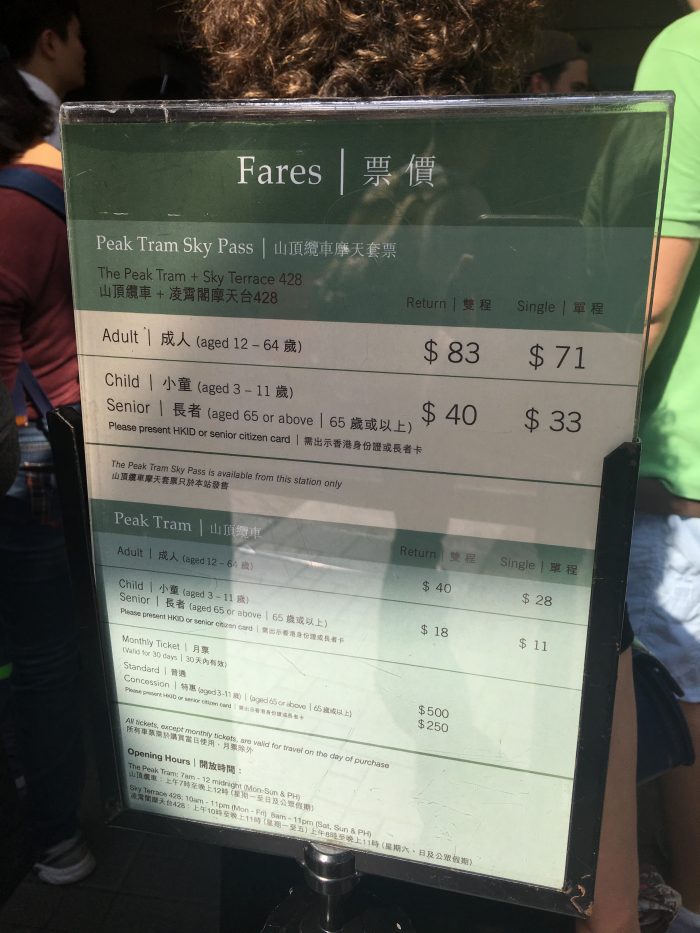 When you get off the Victoria Peak tram, you’re sent into a shopping mall. There’s no way to avoid this, at least not that I could find. If you’re heading to the Sky Terrace, you must keep taking escalators all the way up to the roof. On the way, you pass souvenir shops, food courts, and a Bubba Gump Shrimp Co. restaurant. Why you would want shitty American chain restaurant seafood in Hong Kong is beyond me.

All of these shops & restaurants are why the Victoria Peak tram is so cheap. In most places, such a tram would be only used by tourists, but thanks to the shopping mall at the top, there were tons of locals up there as well. I don’t know why anyone would go up there to shop when there is plenty of shopping elsewhere in Hong Kong, but given that I also didn’t understand Bubba Gump, I clearly don’t understand many things.

After what seemed like a dozen escalators, I finally arrived at the Sky Terrace. I was given an audio guide, which was nice to have, as you can get more info on the various buildings and other sights around Hong Kong that are viewable from the roof.

The view from the top of the building is indeed spectacular. If you’ve seen iconic photos looking out over Hong Kong, chances are they were taken from here. There was an amazing view across the harbor since it was a clear day. 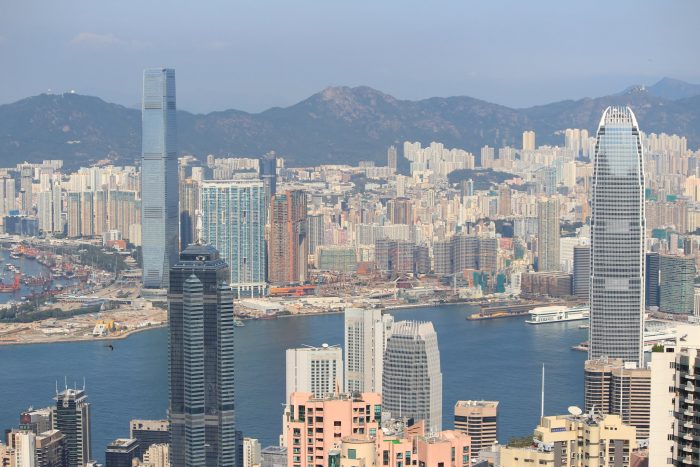 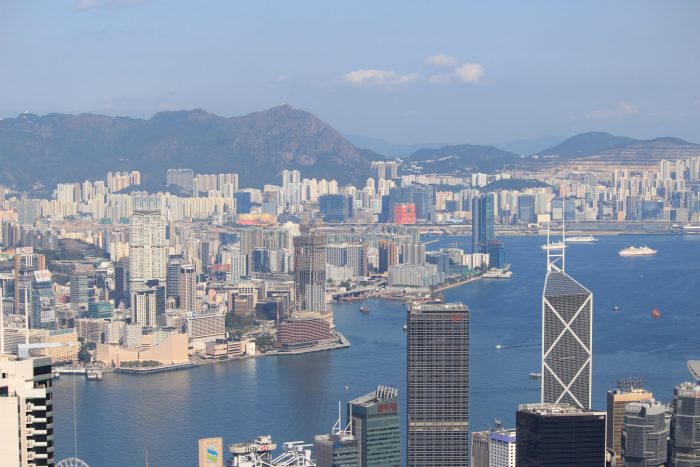 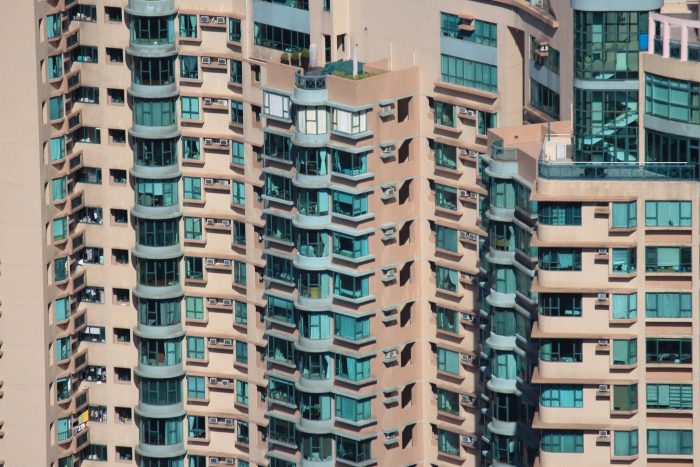 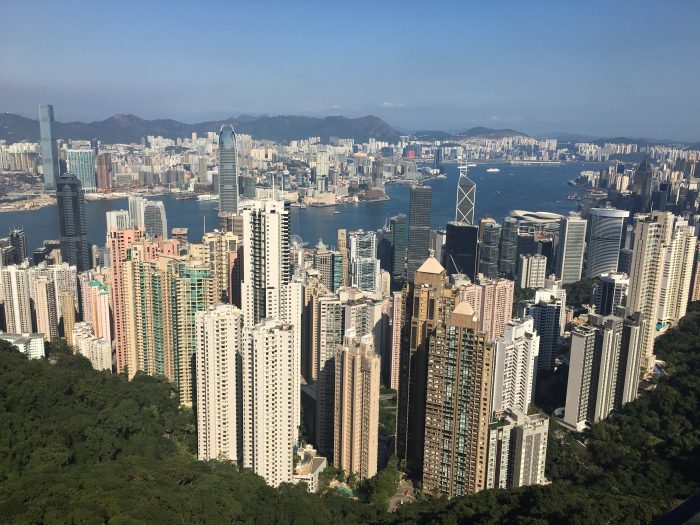 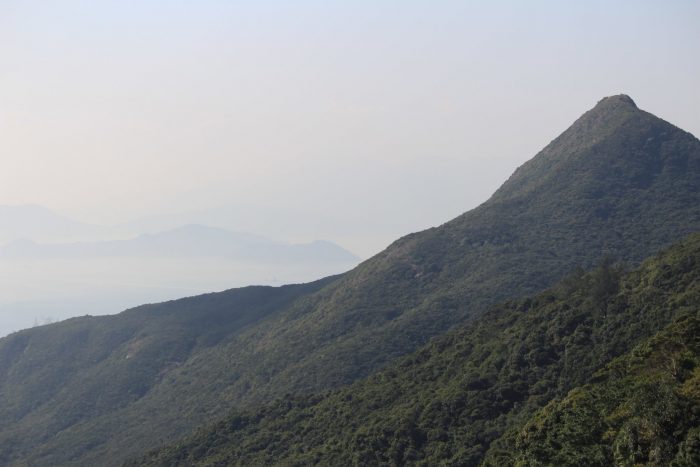 The roof is crowded, as you would expect, but from time to time it thins out. Be patient to get the best views & selfie spots, and be respectful of the other people up there. 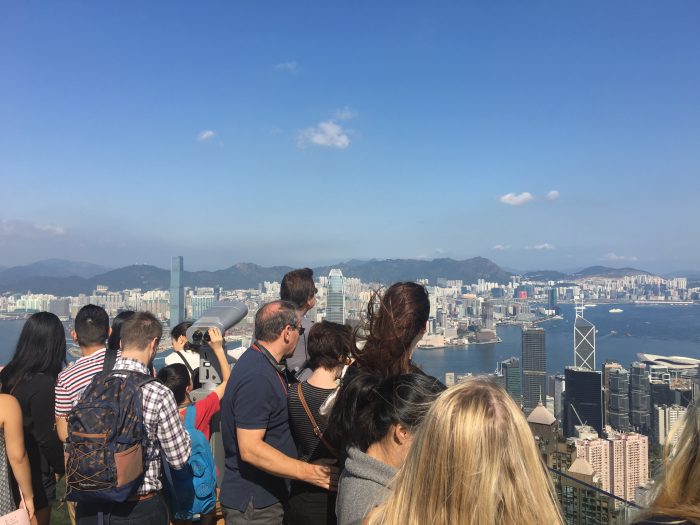 If you don’t want to spend the extra money for the Sky Terrace, there is another option for getting a great view over Hong Kong. Across the plaza, there is another shopping mall. On the top of this galleria is another roof deck. The view from up there isn’t quite 360 degrees, and it’s a few floors below the Sky Terrace, but the view from there doesn’t seem to be bad at all, plus it’s much less crowded. It’s the only reason why I think anyone should be going into that mall, since the views & nature are much more appealing. That said, lots of people had shopping bags, which was bewildering. I really don’t get it. 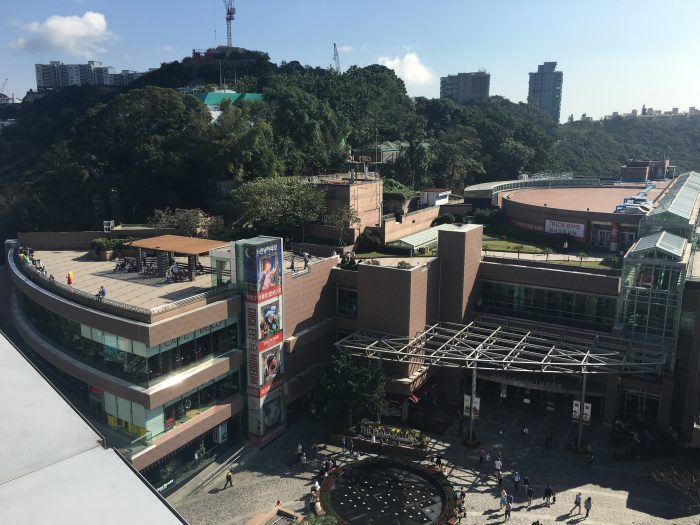 After I was done on the Sky Terrace, I went back down to the shopping area. I walked around for a bit hoping there was something else of interest, but there wasn’t. I did spot that there is a public bus that goes up Victoria Peak, which I imagine is even cheaper than the tram. Since I had a round-trip ticket, I decided to head back down on the tram to get a late lunch from somewhere more authentic. So many of the people who had been on their way up were staying a full day of shopping, and thus there was no wait for the tram on the way back down. One odd note about the tram is that all of the seats face in the same direction, so on the way up you have to face forward, while on the way down you face backward. I’m not sure why this is the case, as I would think that most people would prefer to be looking downward at the view toward the city rather than upward toward the hill. 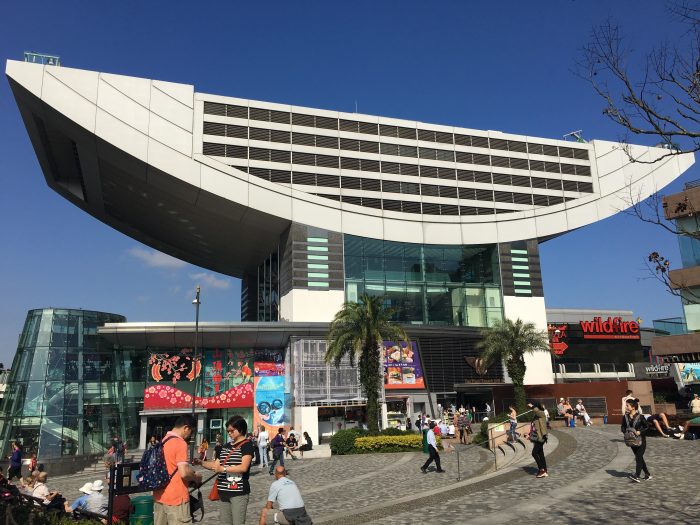 From the tram station, I walked to a restaurant called Yat Lok, which is not far from Central subway station. 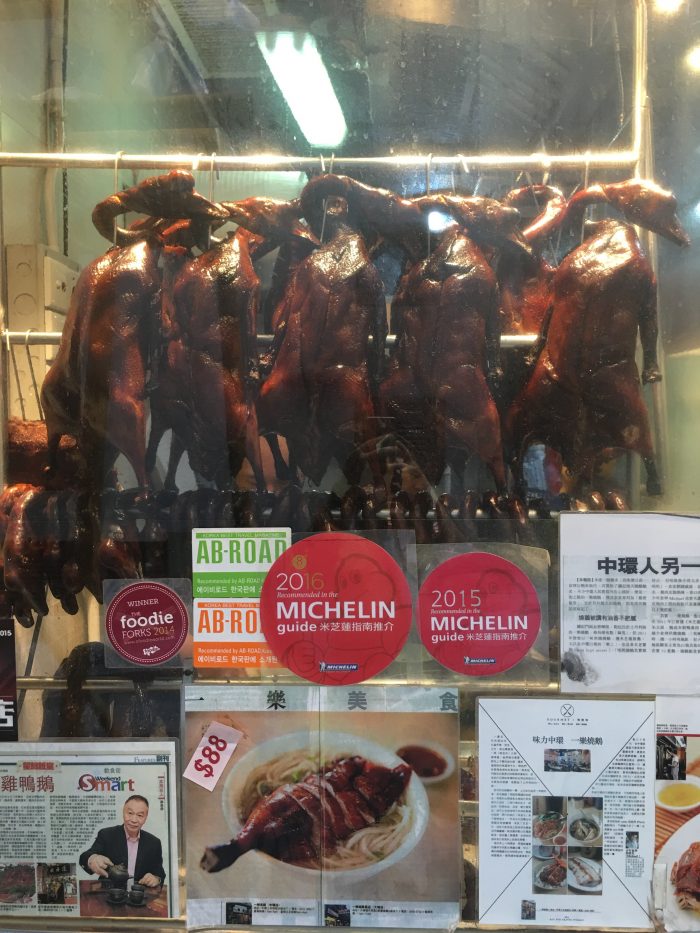 Yat Lok’s specialty dish is roast goose. I had a roast goose drumstick with rice for just 88 HKD (around $11 USD). It was a simple dish, but prepared well. The skin was crispy, and the meat was juicy. When you have one key item, you know how to make it, so well, in fact, that Yat Lok has a Michelin star. 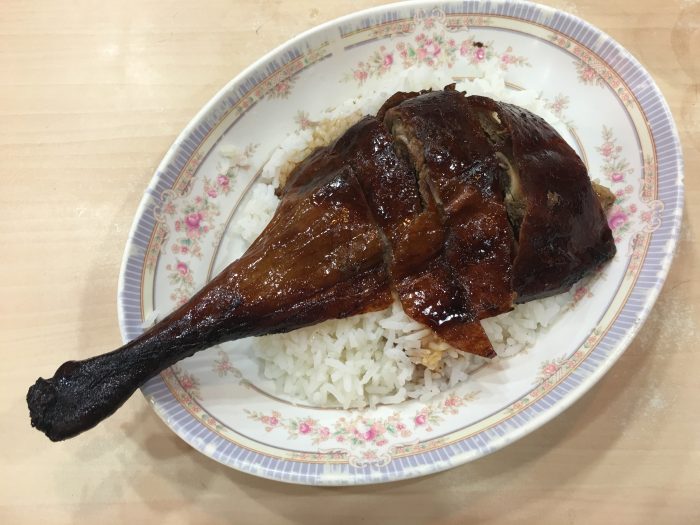 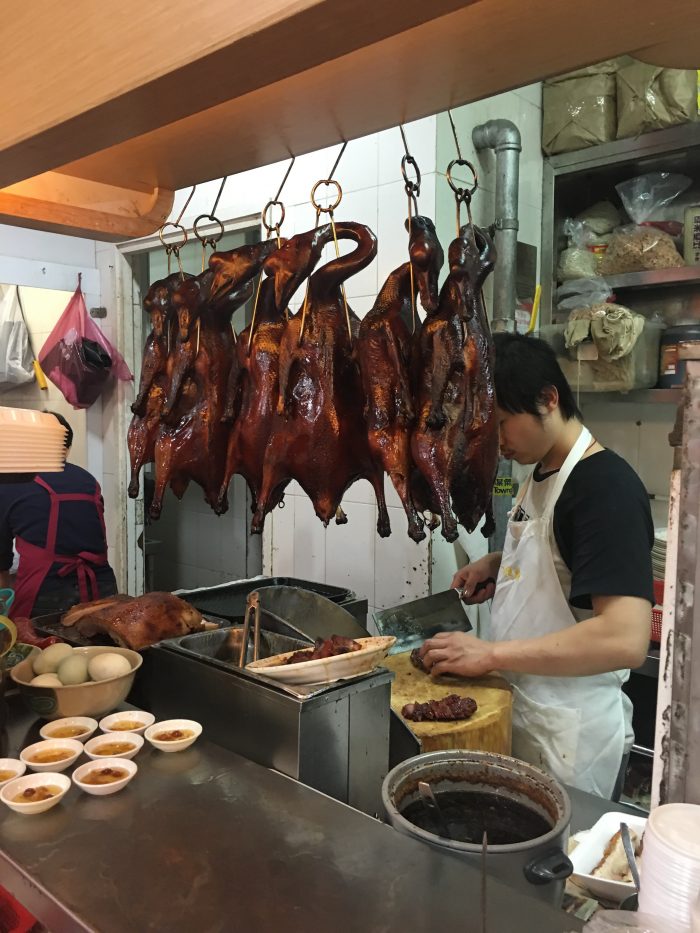 After eating, I walked around Lan Kwai Fong for a bit. I took the mid-level escalators up a bit. The mid-level escalators were a cool way to get up the hill, and had I been smarter, I would have taken advantage of them more. Since the escalators are broken up, they aren’t as steep as I expected, nor are they as dramatic, but San Francisco could certainly use some of them.

I spent the night at some Hong Kong Craft Beer bars, then afterward I was hungry for a late dinner. I found a place called Wong Chi Kei that specializes in congee. While congee is traditionally a breakfast dish, it can be a late night dish as well. While I was intrigued by the fresh crab congee, I went the easy route and had the pork & preserved egg congee instead. 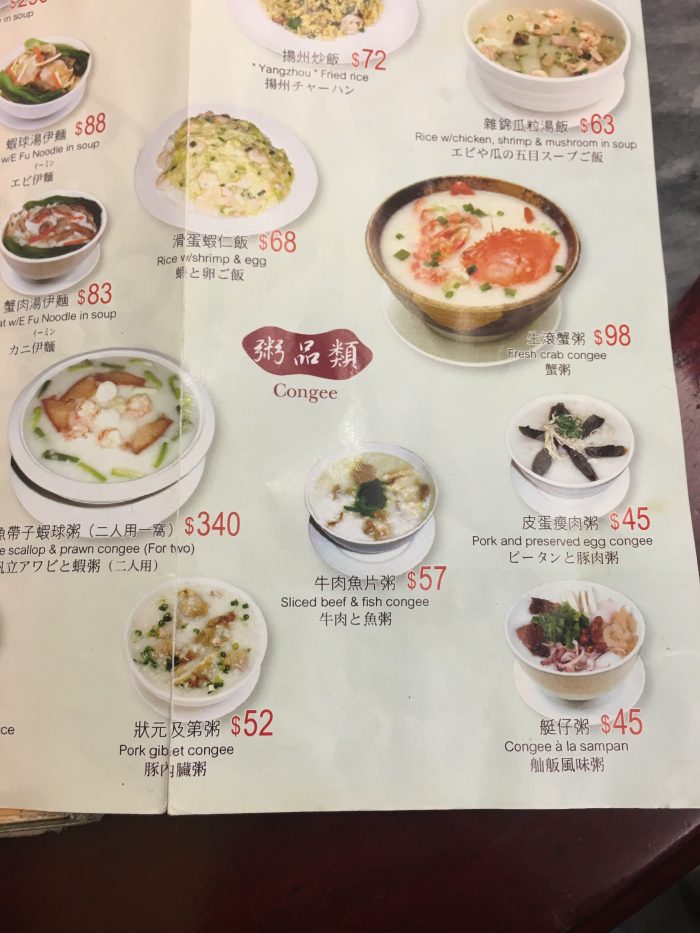 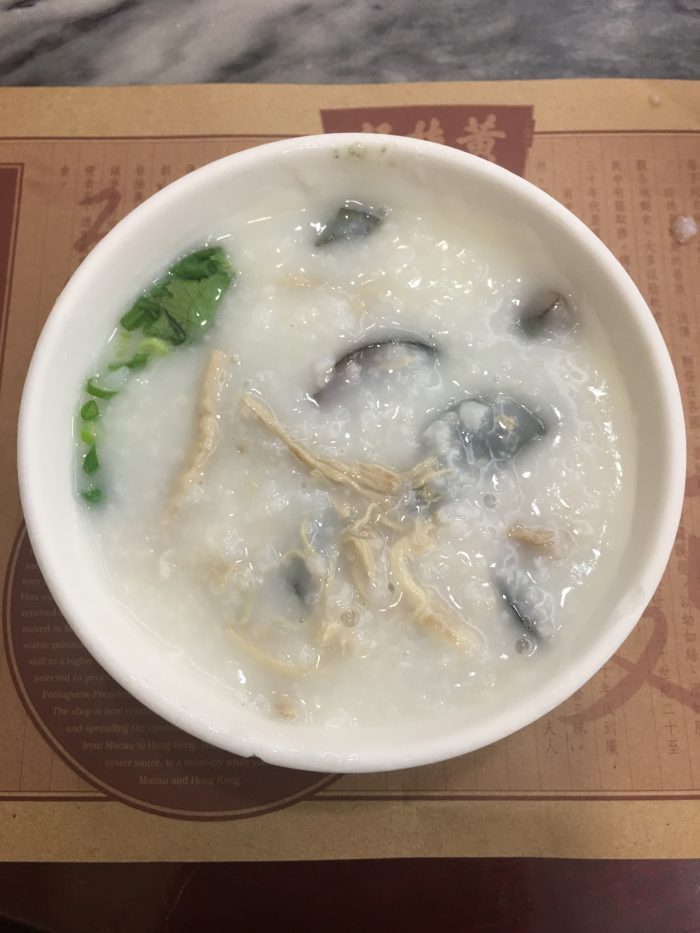 It was my first congee experience, and I have to say, it’s a great dish to end a night of beer drinking. Hong Kong’s food was dependable once again.