Just like any major world city these days, you can find some decent craft beer in Hong Kong. While the quality doesn’t rival that of Japan just yet, there are a handful of breweries making good beer, along with some nice beer bars to drink them in. Prices aren’t cheap, but Hong Kong can be expensive, and most craft beer fans realize they’ll be paying more for good beer no matter where they are. Most of these bars are located in the same area near the SoHo & Lan Kwai Fong neighborhoods of central Hong Kong, south of the subway line, roughly bounded by Sai Ying Pun, Sheung Wan, and Central stations, making them easily crawlable. Here is the best craft beer I encountered on my visit to Hong Kong, including breweries, beer bars, and tap rooms. 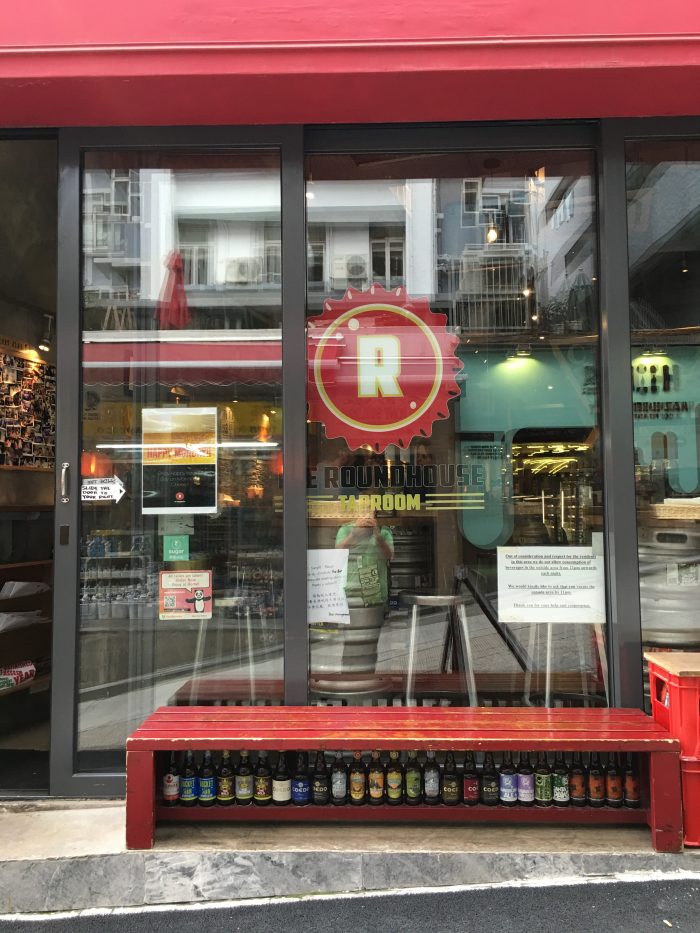 Roundhouse was one of my favorite beer bars in Hong Kong. With 27 taps, there is plenty to drink. They have a combination of local Hong Kong craft beers as well as a fantastic international selection from breweries such as Mikkeller, Brewdog, 8 Wired, Stillwater, and Evil Twin. 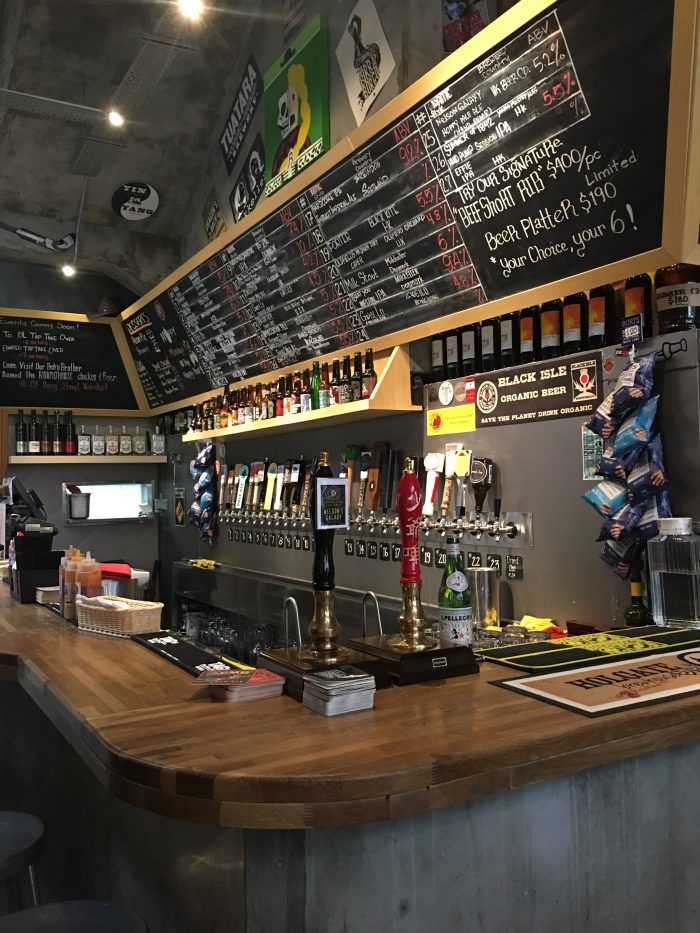 It’s up a huge hill, so you can work up a thirst on your way to the bar, or you can be smarter and take the Mid-Levels Escalators up to the level you need to be at. The bar does tasters of all of the beers available, a paddle of 6 costs 190 HKD ($25). It’s not cheap, but they aren’t small pours, and it can include beers of any price. 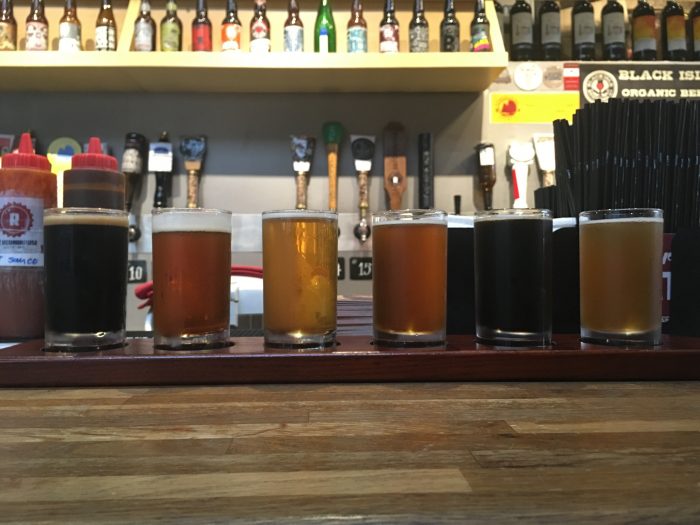 They’ve got great music on as well, plus a solid-looking food menu.  Roundhouse is a place for beer geeks, as they host tap takeovers and even brewing competitions. 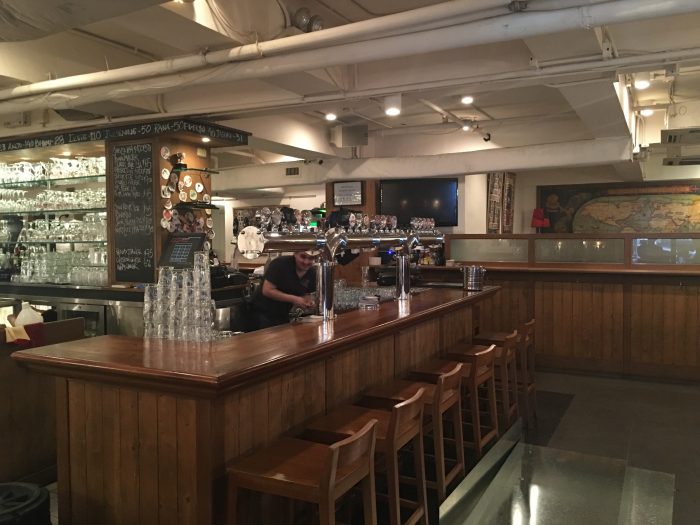 The Globe was closed for a few days at the beginning of the New Year, but I was glad that I was able to make it in before the end of my visit to Hong Kong. The draft list featured 7 local taps, 4 guest taps (which happened to be from New Zealand at the time), plus 8 other taps of more mainstream beers and ales. The true gem here is their bottle list, which features hundreds of unique beers from around the world. 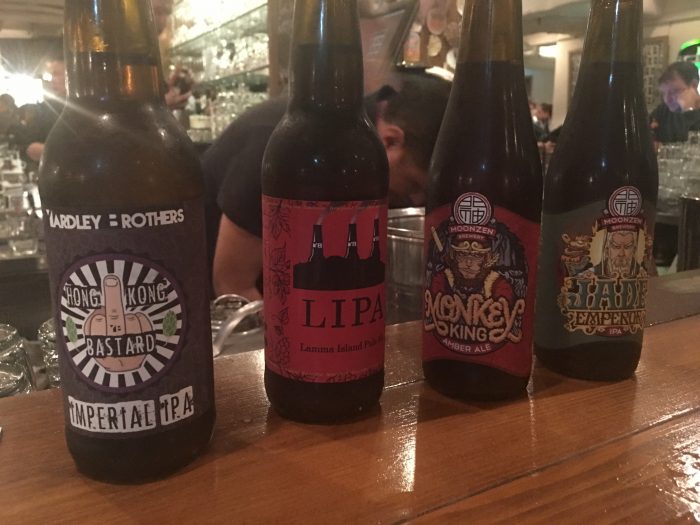 The staff members were very knowledgable. Toby Cooper, who is the Director of the bar, pointed me in the direction of some obscure local bottles I hadn’t seen anywhere else, such as Yardley Brothers. This is a place that is truly supporting a growing beer scene in Hong Kong. When one beer had a bit of a bottling issue, he gave it to me on the house. The bar has a strong British influence, with another real jukebox playing music from British & American rock bands. They know their stuff at The Globe, and it’s easy to see why it’s a popular bar. 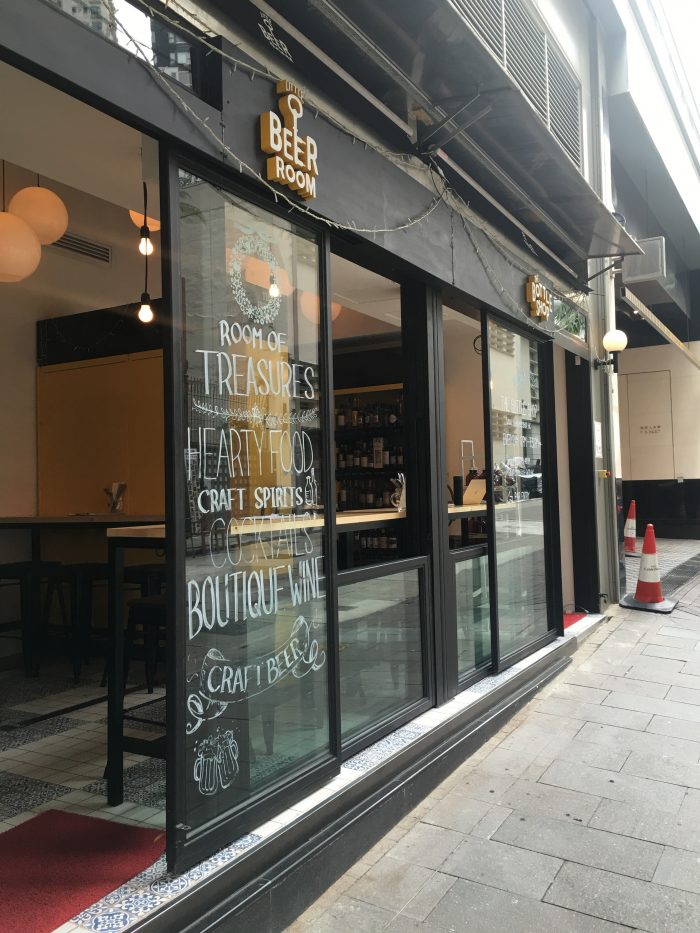 Little Beer Room has 15 taps from all over the world, though only 1 tap was a local beer when I visited. It’s attached to a bottle shop with a nice selection called The Bottle Shop, which is nice, though the bar itself only had 4 bottles available to drink, which was a bit disappointing. 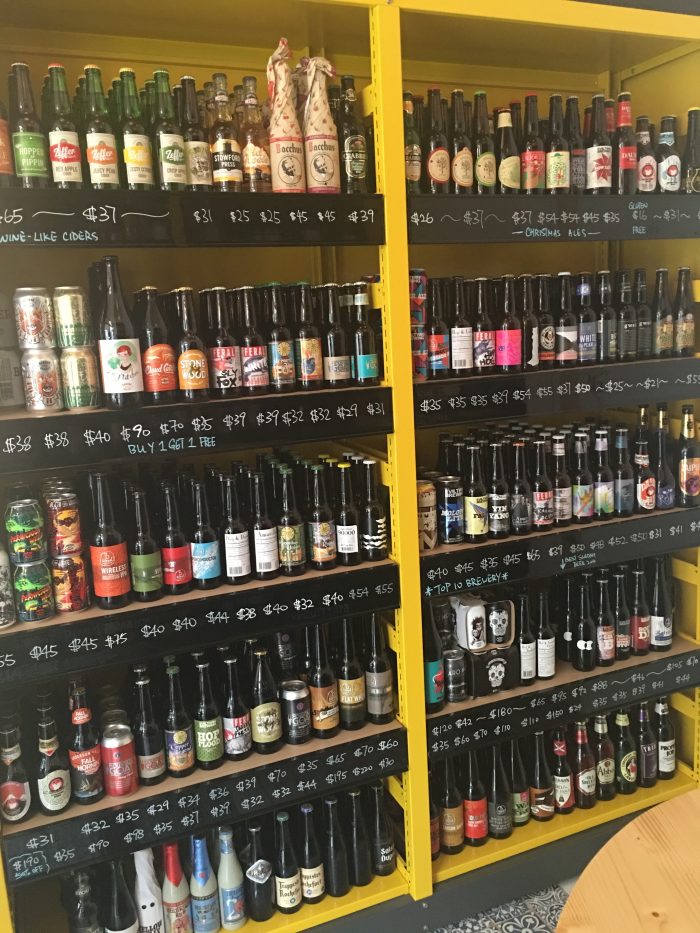 I’m not sure why that was the case, other than the fridge space requirement. It’s a small place, as you may have guessed by the name. There is also a larger outlet of The Bottle Shop far outside the main areas in Sai Kung.

The best breweries in Hong Kong

Craft Brew & Co has a few locations in Hong Kong. When I was there, two were open, but a third was in the process of opening soon. I visited both that were open.

The first was on High Street, not far from my hotel near Sai Ying Pun. It had 4 taps of its own beer, plus 6 more guest taps. There was also a bottle selection of around 40-50 beers from all over the world. It was a rainy weeknight when I visited, so the place was quiet. I didn’t have any food, but the menu of burgers, sausages, and hot dogs looked like a good combo with the beer. 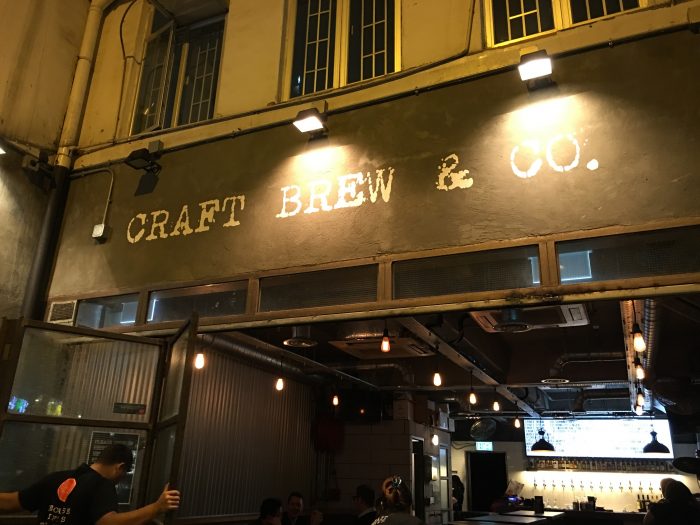 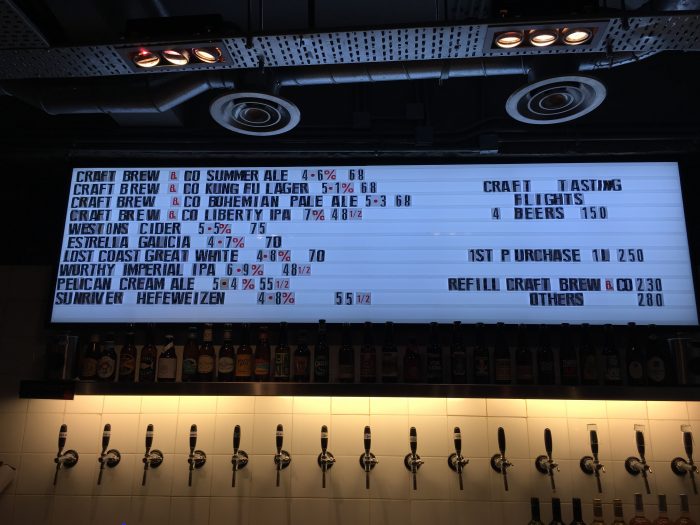 The larger location of Craft Brew & Co is a bit more centrally located on Old Bailey Street. Located on a corner, it has several large doors and windows, allowing for fresh air & sunlight to come in. There are also outlets at some of the seats, which is always a nice touch that more bars should have. The guy running the bar was friendly & knowledgeable, and since it was quiet when I first got there, we chatted for a while. It started to get more crowded around 5:30pm, as businesspeople began to end their days. 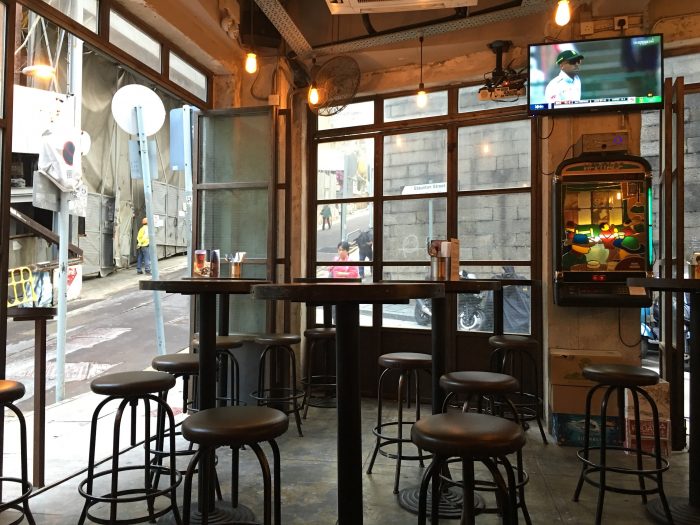 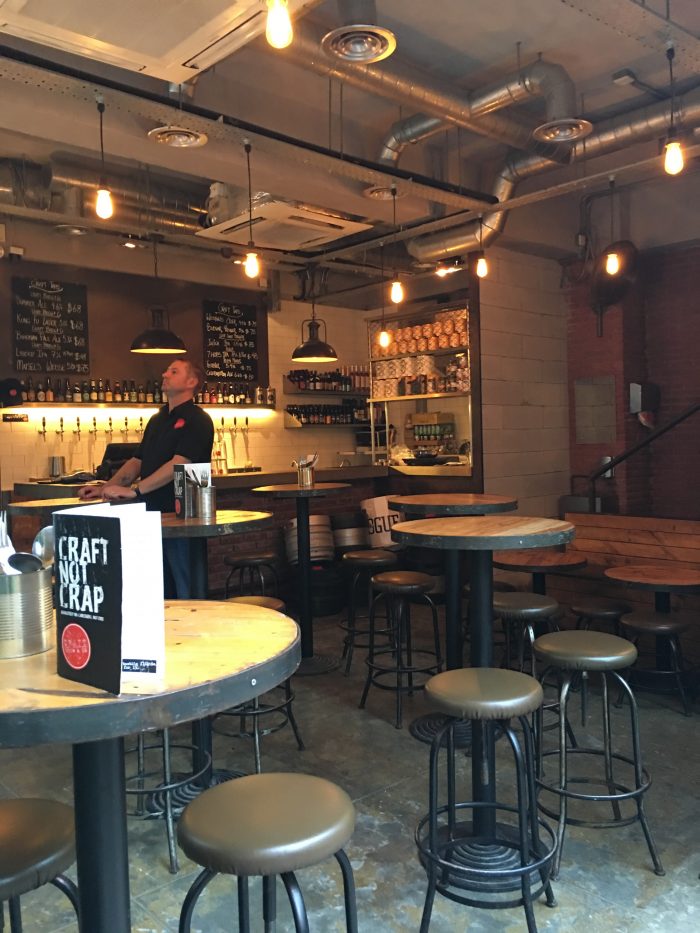 The bar has 5 taps of their own beer, plus 6 more guest taps. Given how nice the bar is, I wish they had even more taps, but it’s still a great spot. Happy Hour specials are just 48 HKD for a pint, making it one of the cheaper good beer options I encountered in Hong Kong. There’s also a real jukebox, which you don’t see many of these days, playing a great selection of mostly British music, including Oasis, Blur, and the Rolling Stones.

It’s also home to the narrowest restroom I’ve ever encountered, with both of my feet touching walls at the urinal. Space is at a premium in Hong Kong. 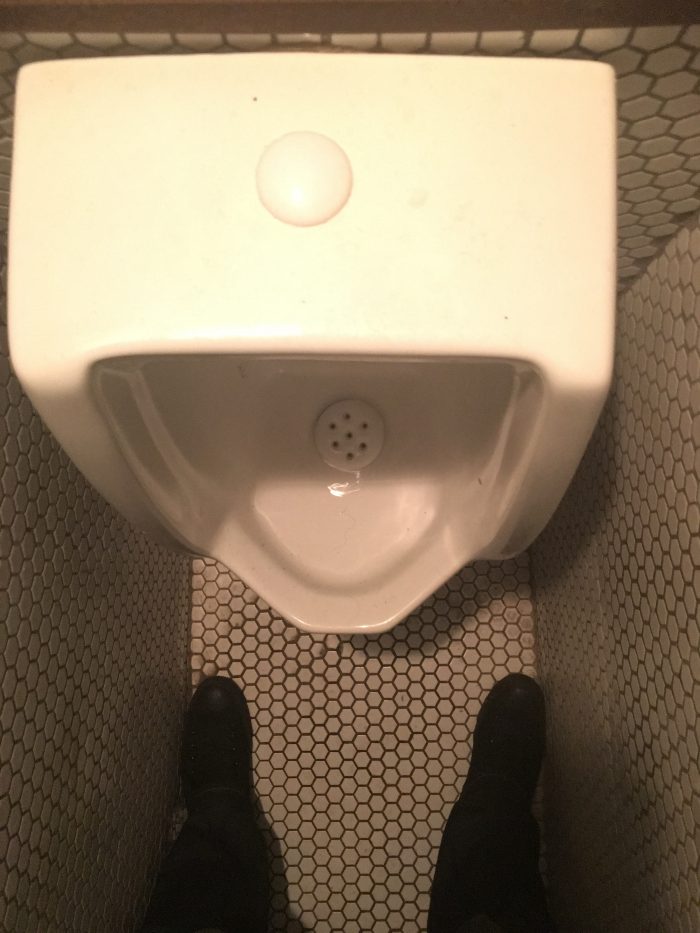 There are a few more beer bars in Hong Kong that I wasn’t able to try, including The Ale Project, The Beer Bay, De Belgie, and Crafty Cow. I tried to visit Crafty Cow, since it looked like a nice place, but their actual hours didn’t match their published hours, and thus each time I went, they were closed.

Overall, Hong Kong has some solid choices for beer drinkers. While the local craft beer scene may be small, it’s growing, and given some more experience & the continued existence of supportive craft beer bars, there’s great potential for the future.