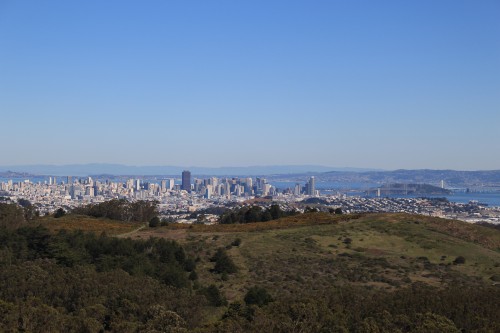 The San Francisco Bay Area has no shortage of places to enjoy the outdoors, but some of the best gems are hidden in plain sight. While many day hikers flock to the Marin Headlands, Mount Tam, and Point Reyes to the north, and the Oakland hills to the east, there are parks just south of San Francisco that have nice trails and incredible views as well.

One of these spots is San Bruno Mountain State Park, which lies just south of the San Francisco city limits. Every local has been past these mountains hundreds of times while driving down the 101 or 280, both of which skirt the eastern and western sides of the park.

Entrance to the park is $6 if you choose to park in one of the main parking lots off of Guadalupe Canyon Parkway. I imagine you could avoid this fee if you wanted to hike in from one of the edges of the park, but most of the trails start near the parking lot, so paying is no big deal. Plus it’s good to support the park systems since California has chosen to fund them in a pay-as-you-go manner rather than giving them proper funding from the state budget.

There are several trails of varying lengths, but we chose to hike the Summit Loop Trail, a 3.1 mile loop up to the top of the summit. It’s pretty accurately named, so there’s not much to elaborate on as far as the description. As you leave the parking lot, you can choose which way to do the loop by heading to the left (clockwise) or the right (counterclockwise). We had chosen the left, which meant that we were more or less heading straight up the mountain at a constant rate. It was never particularly strenuous, and there were plenty of spots to check out the views. There are no stairs to climb, just a well-worn path.

The weather was perfect for hiking. The high was in the mid 60s, and since storms had swept through the evening before, the sky was crystal clear. The hike would be less pleasant if it was too much warmer than that, as once you leave the first part of the trail outside the parking area there are no trees to provide shade. The only respite you might find is from the radio towers and associated buildings at the very top.

San Bruno Mountain State Park has a reputation for being a foggy place, given the local geography. The fog has helped keep the park relatively green, despite the lack of rain in California. If you timed the weather just right, you could potentially go to the summit and look out over the fog blanket below as it rolls in.

The Summit Loop Trail doesn’t quite go to the top, so a small detour to the east is necessary to get the best views. While we chose to hike, it’s actually possible to drive to the summit. A few people had done this, but the small parking lot at the top was not crowded. Given the 360-degree views of the Bay Area, San Bruno Mountain would be a great place to take visitors from out-of-town. Since it’s so close to San Francisco International Airport, you could even make it a quick first stop. 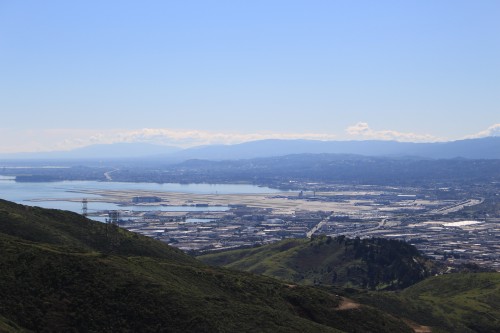 It was so clear that we could see all the way to Point Reyes to the north, and the Farallon Islands to the west. 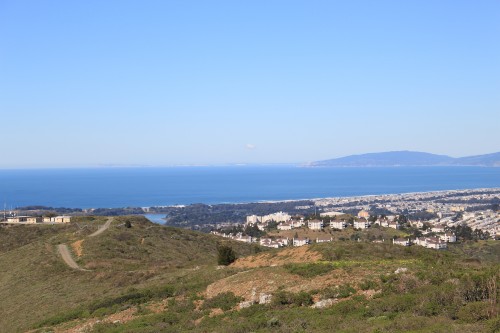 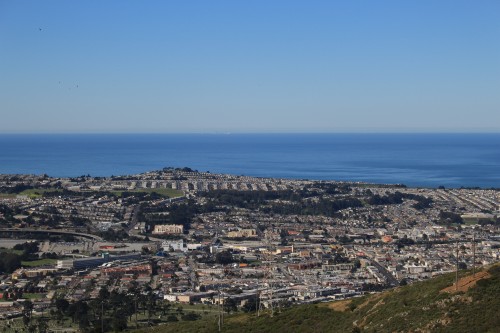 After spending a while at the top admiring the view and taking photos, it was time to continue along the loop. Since we had chosen to do the loop clockwise, we actually still had about 2/3rds of the journey back to the car remaining. Given the fact that it’s a longer route to the San Bruno summit, I’d recommend going counter-clockwise if you want a more gradual ascent.

The clockwise descent gives you views to the west and north. Closer to the parking lot, there are a couple of bridges over small streams that remarkably were still flowing despite the lack of recent rain. We thought we were done with all of our climbing, but the path actually descends a bit too far, resulting in one last short climb before reaching the parking area.

In the sun, a couple of lizards calmly basked. We humans may have wanted more shade, but they were perfectly happy.

Lizard in the sun