On my final day in Nice, I walked through the Old Town section of the city. There was a nice farmers market with local cheeses, meat, produce and bread. Fresh baked bread and fresh goat cheese are a perfect aid for a slight hangover. The hangover was a result of watching a couple of NFL playoff games with some American students who were staying in the same hotel.

After eating, I then walked around the harbor. I saw an old man who was quite happy to be feeding some birds as they landed on him. It reminded me of Blur’s Parklife. 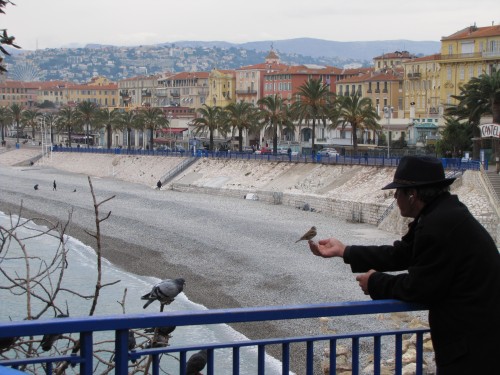 I continued around the coastal road until I got to Villefranche-Sur-Mer, which is where I had walked to from Eze on a previous day. The town had some nice narrow alleyways in the old section of the city, though the place was mostly deserted as it was starting to rain. I took the train back to Nice, watched a bit of that night’s playoff games, and went to bed to rest up for what was unknowingly going to be a long day of travel ahead. 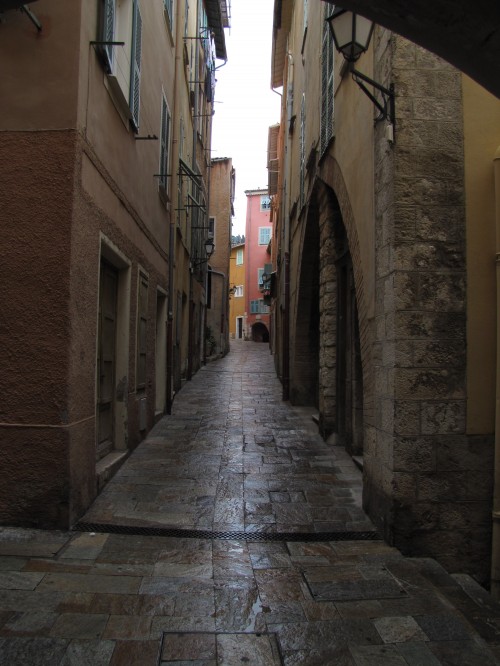 I should have known that my day was going to be interesting when on my walk to the Nice railway station, I encountered a man who was peeing in the middle of the sidewalk. At 10am, the guy was just letting loose on a pretty busy street, not even really turning away from anyone or making any attempt to hide it. Even worse, he was standing facing up a slight incline, so as he peed, his urine was running back down around his own shoes. Not the brightest guy.

On my first train of the day, a guy sat down on the stairs going to the second level. Most people would get the hint after the first person said, “excuse me”, that maybe that’s not exactly the best place to sit. But not this guy. Despite there being plenty of other places to sit, he insisted on the stairs. The Universe paid him back well though, as he spilled coffee on his white pants and it looked like he had crapped himself.

The first part of my train journey was from Nice to Ventimiglia, which is just across the border in Italy. It was at this point that I switched to the Italian train system, which is pretty much exactly what you’d expect it to be. It was so bad in fact, that I actually began to miss San Francisco’s public transportation system, Muni. For those of you who know me and my constant slagging of Muni, its reputation is well-deserved, and claiming that any other system is worse is a pretty big achievement.

I had spent a little bit extra on my Eurail pass so I could see what taking first class on trains was like. Normally I wouldn’t care, but since it was only about $50-100 more to potentially get first class seats on all of the trains I was on, I figured why not? Generally, it meant slightly nicer seats, somewhat less crowded cars, and that general sense of self-importance that comes with knowing you’re in first class. On this particular train, the first class car was nothing special at all, which was disappointing, since I was going to spend the next many hours on it.

For a while, the train slowly traveled along the Italian coast, eventually turning northward to head in the vague direction of Milan. After what had already felt like an eternity, we stopped at a station in an industrial town. And stayed stopped. For a very long time.

The name of the town was Voghera, and I can’t recommend it as a place to spend any amount of time. According to Wikipedia, it appears to be only known for being bombed during World War II and for a rail disaster back in the 1960s.

After about 30 minutes of waiting, someone finally managed to get enough of a translation from one of the train operators that we were stuck there due to protesters on the tracks ahead. This did not put a stop to the waiting. Finally, after about an hour and a half, we were all switched to another, nicer train, and we continued along to Milan.

Unfortunately, Milan was not my final destination. I had to connect to another train to head southeast to Rimini. By this point, my scheduled connection was long gone, and the next train was not for 2 more hours. The 2 hours was filled with waiting in a long line to get my train ticket changed, as well as scarfing down 2 slices of pizza, opening credits of “Louie” style, rather than having the nice Italian dinner I had planned in Rimini.

The final train ride of the day (train #4, for those keeping score at home), was uneventful. I was amused by the frequent announcements warning people that it was forbidden to open the doors before a stop and forbidden to exit the train before a stop. I’ve been on trains in many places, and nowhere other than Italy have I ever heard this announcement. I pictured dozens of Italians opening doors and leaping off moving trains until someone finally told them not to do it. Most places might solve this issue with locks, but not Italy.

I finally arrived in Rimini around 10pm, some 12 hours after I had left Nice. Thankfully my hotel, the Hotel Villa Lalla, was fantastic. In addition to having a great price in the first place, I was upgraded to a huge room with 2 beds, plus a large bathroom that had a full bath. Between having walked so much in France and being on a train all day, I needed to relax, so I took a nice warm bath for ages and then went to bed.

Song of the Day: Art Brut – Blame It On The Trains