Home
Travel Guides
Europe
Switzerland
Zurich
A day trip from Zurich to Liechtenstein & so much more (Or, why sometimes it’s good to get into cars with strangers)

Liechtenstein is a snowy, mountainous country just east of Switzerland. Like many small nations, its principal purpose seems to be to serve as a tax dodge for the wealthy.

I took a train filled with skiers and snowboarders from Zurich to Sargans, then a bus from Sargans to Vaduz.

Vaduz is the capital of Liechtenstein. With only around 5,000 inhabitants, it’s hardly a bustling metropolis. Additionally, despite having been founded around 1322, there was little to the town in terms of historic sites.

After very briefly visiting the stamp museum (admission free), I headed off to do a bit of hiking in the hills. I followed signs from the city center up along a hillside trail. The signs were in multiple languages, and outlined the historical significance of the area, focusing on Castle Vaduz, which was my destination.

I walked along the icy paths for about 15 minutes, passing by 5 or 6 signs along the way. With the castle in sight, I reached the final sign, a sign that said the castle was closed to the public.

Now I’m not an expert on running historical sites, but you’d think that this was something they may have wanted to mention a bit earlier in the journey. Not only was the castle itself not open to the public, it’s actually the residence of Liechtenstein’s Princely Family, so the outside isn’t particularly welcoming to tourists. 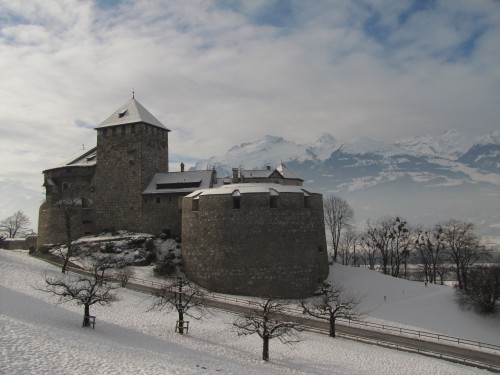 Disappointed with the lack of castle access, I found a signpost marked as “Wildschloss”, with an arrow pointing up further into the hills. Having traveled all the way to Liechtenstein only to find very little to do, I figured I’d go for it, despite having no idea what a wildschloss was or how far it was away from that point. At the very least, it was a relatively sunny day, if a bit cold.

I headed into the hills, with the snow on the path gradually getting a bit deeper as I went. After around 15 minutes of walking, I caught up with a couple of guys who were also out on the trail.

I asked the 2 men if they knew how far the wildschloss was, and the older of the 2 said it was only about 30 minutes more. They invited me to join them on the hike, so I did. Given the difference in ages, I had thought they might be father and son (or grandson), but it turned out that the elder man (Helmut) lived in Liechtenstein & traveled frequently to the United States, while the younger man (Daniel) was an au pair who was visiting from Spain.

We all chatted as we walked. Helmut told us more about the area, which had many hidden military tunnels. He also informed us that there is a large Tibetan community in Liechtenstein & Switzerland, which when you think about it makes sense, given the geographical similarities. The hike to our destination ended up taking longer than 30 minutes. It might take 30 minutes in the summertime, but as the elevation rose, we eventually found ourselves trudging through ankle-deep and then, near the very end of the hike, mid-calf-deep snow. These are the moments where you hope that you are going to see something spectacular at the end that makes it all worth it. 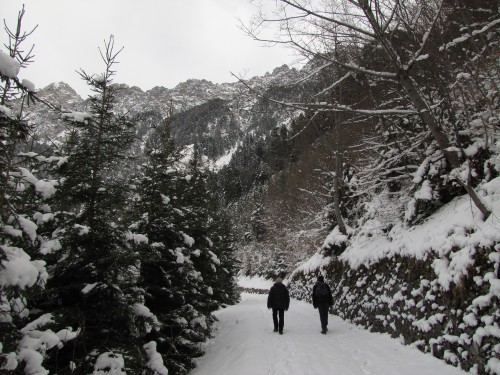 Hiking the lower portions of the path to Wildschloss in Liechtenstein

Finally, we reached our destination, a place called Wildschloss by the locals, but also known as Schalun Castle.

The castle was originally built in the 12th century, but now lies in ruins. That was fine by me. Ruined castles are the best castles. 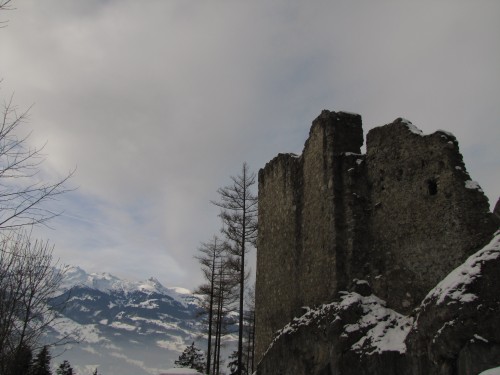 While Daniel & I wandered around the ruins, Helmut was on his cell phone with someone. Once he hung up, he said it was his wife, and he was asking her if she was going to be using their car for the rest of the day. He then offered to give us a tour of the area if we didn’t have anything else planned.

Now this is where everything your parents have ever said about getting into cars with random strangers comes screaming into your head. Daniel & I shot each other a quick glance, shrugged our shoulders, and said “sure, why not?” Assuming Daniel was thinking the same thing as I was, the glance & shrug meant that we could easily overpower this guy if we needed to, assuming he didn’t have crazy old man strength.

We all headed back down the mountain, eventually veering off into the neighborhood at the base where Helmut’s car was parked. We got in, and we were off.

Our first stop was Werdenberg, just back across the border in Switzerland, near Buchs & Grabs. Werdenberg is famous for being the smallest town in Switzerland, though researching this fact leads me to believe there may be a bit of contention on this. Whatever the case, the town is incredibly tiny, consisting of just a few wood buildings and narrow streets, with a castle sitting on a hill above. 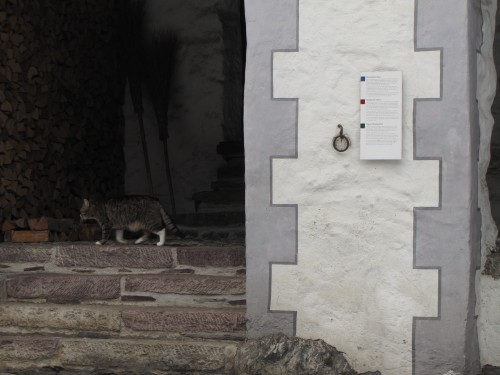 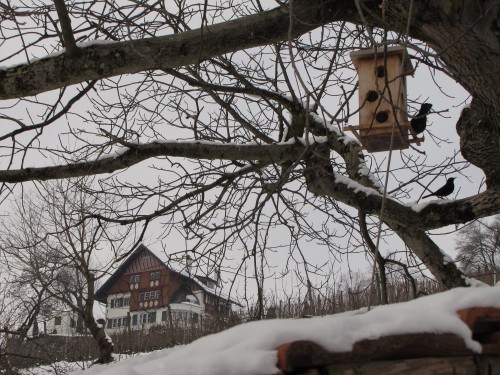 After a brief wander through the town (really, there’s no other type of wander you can do in a place that’s so small), we were back on the road.

By this point, we realized nobody had eaten, so Helmut stopped at a shopping center just off the motorway that skirted the Rhine, and we all had lunch at a cafe inside. With the short winter day fading, the stop wasn’t for long, as we had a bit of a ride until our next destination. After about perhaps 15-20 minutes on the road, we were in my 3rd country of the day, Austria. We drove through Bregenz without stopping, but as we passed, Helmut pointed out the opera house that was used in the filming of the James Bond film “Quantum of Solace”.

Here’s a clip from the film that shows the building:

Our next stop was across yet another border, this time in Germany, my 4th country of the day. Our destination was Lindau, a small medieval town sitting on Lake Constance. The medieval center sits on an island on the lake.

What is most notable about Lindau is that the buildings are actually old. With much of Germany having been destroyed in World War II, it’s rare to find a German town that actually feels as old as it is. Lindau is one of the few that survived mostly intact.

The combination of the setting sun, the cold weather, and the off-season emptiness of the city made for a desolate feeling in the town. I imagine that in the summer, Lindau is much livelier with tourists, but on our visit, it was quiet. 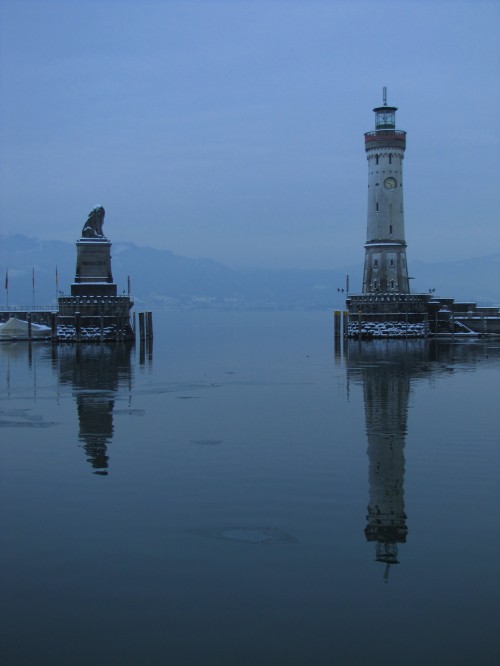 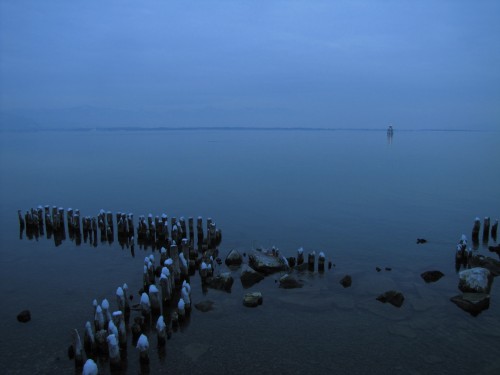 We walked around the lakeshore for a while, then headed back to the parking lot. Despite it now being nighttime, Helmut had one last stop for us back in Switzerland in Saint Gallen.

St. Gallen was a nice medium-sized Swiss town, but much of it was closed for the night by the time we got there. The quiet of the town was broken only by the constant ringing of church bells. Even though most of the town was quiet, we still were able to see many of its winding alleys and parks, which were filled with snow. It was nice of Helmut to drive us all the way to St. Gallen rather than back to where we had started, since it was the closest place with decent train and bus connections back to Zurich. 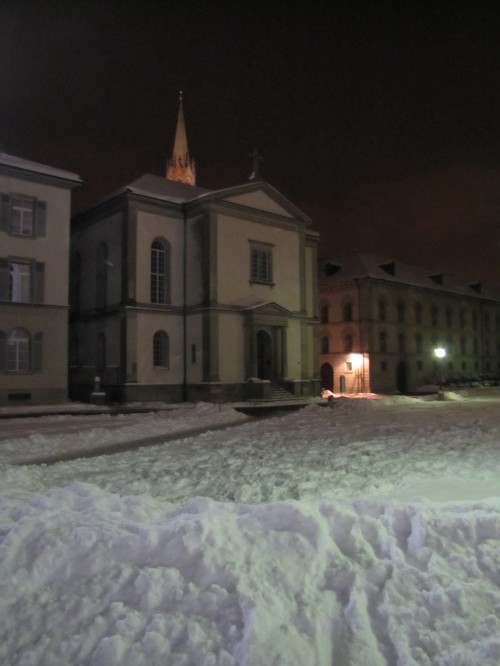 We said our goodbyes and all went our separate ways. It was an entirely unexpected day, but I got to see so many places that I would not have otherwise. So thank you, Helmut, wherever you are, and thank you to all the other Helmuts out there who are excited to show visitors their worlds.