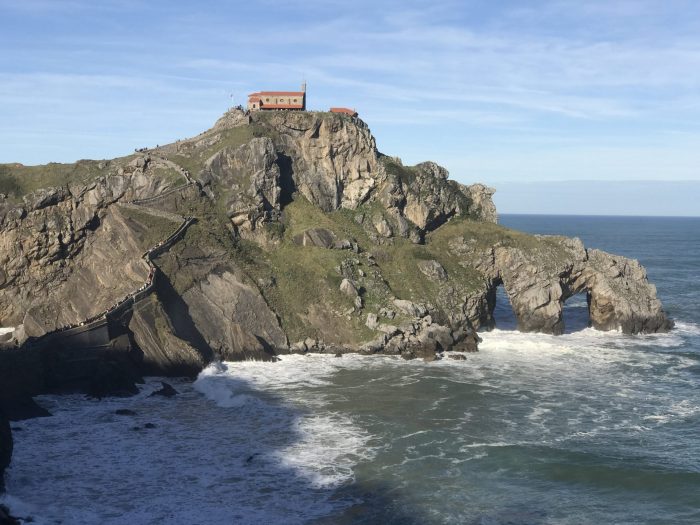 San Juan de Gaztelugatxe as Dragonstone in Game of Thrones

In the first episode of Season 7 of Game of Thrones, Daenerys Targaryen travels to Dragonstone, her ancestral homeland. The first part of her arrival scene was filmed on Itzurun Beach in Zumaia. It then merges with views of Gaztelugatxe through the magic of television.

However, while the winding path to the top of the mountain was left intact, the small church of San Juan de Gaztelugatxe was replaced with the massive Dragonstone Castle. 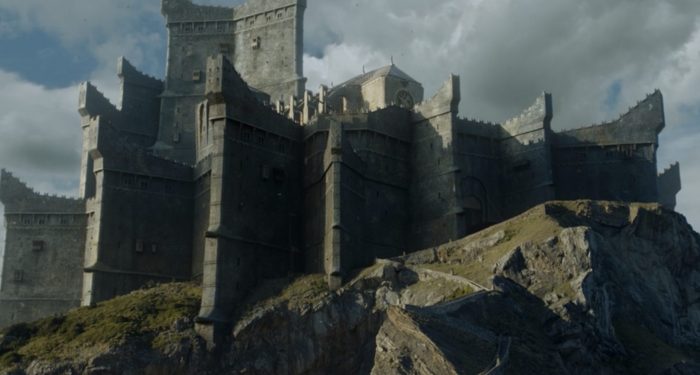 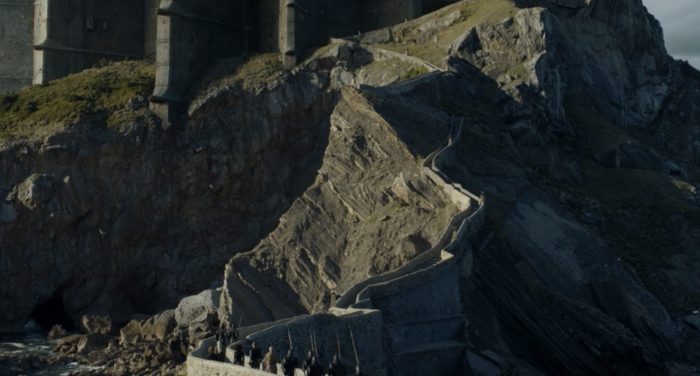 While tourists may not arrive as dramatically as the Mother of Dragons did, the real life Gaztelugatxe is still impressive, even without this digital construction.

How to get to Gaztelugatxe from Bilbao

Bus A3518 travels from Plaza Moyua in central Bilbao to Bakio. The ride takes about 45-70 minutes and runs every hour or two. Another line, A3527, may also go to the area, but timetables & availability are always changing, so check the latest info locally before you try to make the day trip to Gaztelugatxe.

The seaside town of Bakio is about a 35 minute walk away from the entrance to Gaztelugatxe. However, there is also a minibus line A3524 that runs sporadically between Bakio & Gaztelugatxe on weekdays. Alternatively, you can also get from Bakio to Gaztelugatxe by taxi. If there are enough other travelers on your bus, this may not be a particularly expensive option. I walked, as I wanted to experience as much of the gorgeous Basque coast as I could. This led to an enormous amount of hiking up and down hills in one day, as you will soon find out.

For a more convenient experience, there are also plenty of group tours to San Juan de Gaztelugatxe from Bilbao, since it’s such a popular day trip. Many of these tours also include Guernica & Bermeo. It’s also possible to take the day trip to Gaztelugatxe from San Sebastián. However, it is a longer journey with fewer tour options.

Bakio is a quiet coastal town. At its edge, there’s a viewing platform with vistas of the local beach. Near this overlook, there’s a turnoff for a small road that hugs the coast. This is the path to follow if you’re doing the walk to San Juan de Gaztelugatxe. The main road goes further inland & has more traffic, but it’s more direct. 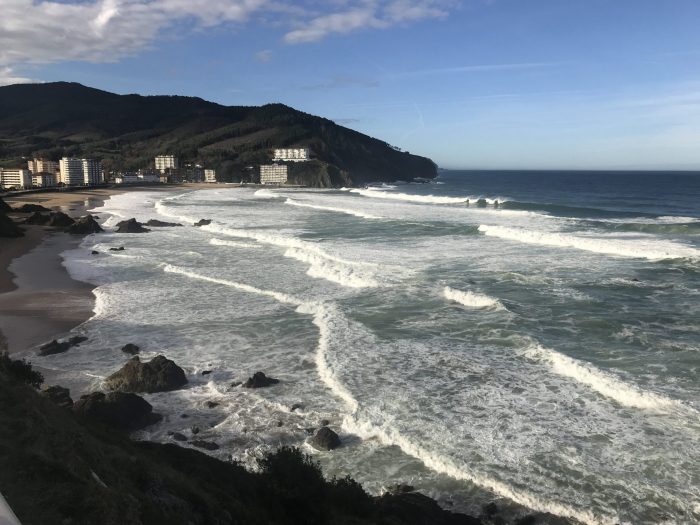 Walking along the coastal road is mostly pleasant, with views of tall cliffs and huge waves rolling in from the Atlantic. The road does go up and down hills as it winds its way towards Gaztelugatxe. 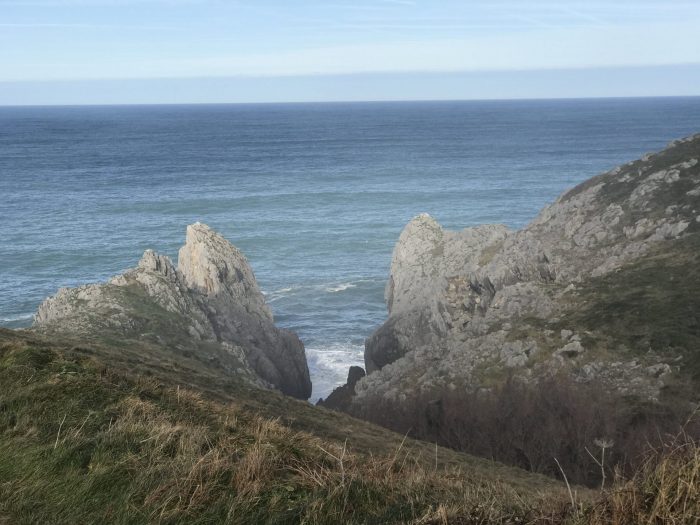 Although there are the sections of the road that undulate through the terrain, the overall path is uphill. This is both a good thing and a bad thing.

Approaching the summit, you’ll hear the church bells ringing from San Juan de Gaztelugatxe. And then, there it is, in full view below you, the stunning island from all of the Instagram posts and Game of Thrones. 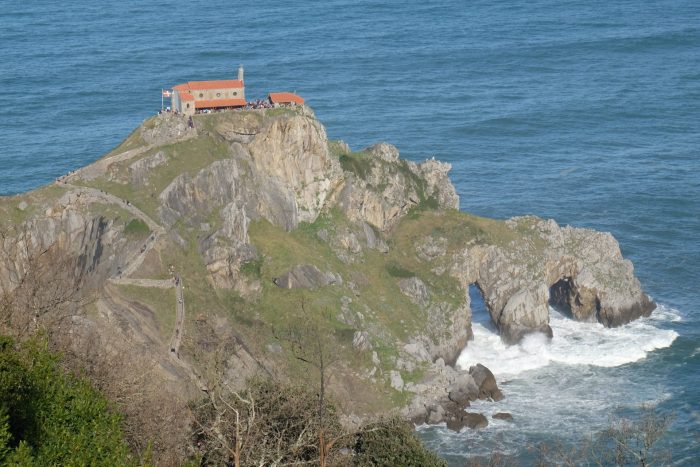 The key word there is “below”. Having just walked up this hill, you then realize that to actually get to San Juan de Gaztelugatxe, you need to walk all the way down to the coast again, where a stone bridge connects the island to the mainland. And then hike back up to the top of Gaztelugatxe, where the church is perched. Then return back down to the coast. And then climb back up this same hill. Maybe that taxi is a good idea.

The taxis & buses (when they run) stop near Eneperi, a restaurant & beer garden located at the main Gaztelugatxe parking area (elevation 179 meters). Eneperi has a nice selection of pintxos. There is also a hotel here, but there’s no kiosk or store for picnic supplies.

From the restaurant, it’s a 1.3 kilometer (0.8 mile) walk to San Juan de Gaztelugatxe. The first section of the shortest path is quite steep, although it’s paved. I saw an ambulance attending to an older woman who had encountered trouble along the hike. There is also a longer, less steep route to the island, which may be better for some people.

At one point, the path splits. To the right, the main path heads to San Juan de Gaztelugatxe. Head straight to first visit the overlook that has some incredible views of the island. 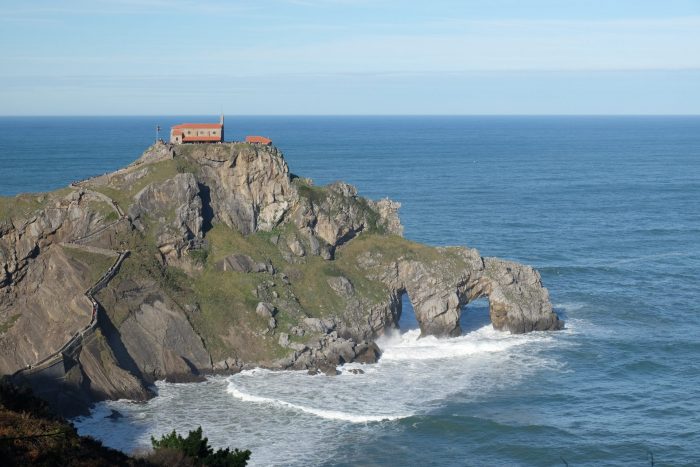 When I visited Gaztelugatxe, the final portion of the steep path from the restaurant down to the coast was an unpaved, slippery, muddy morass. Thankfully, this path has recently been upgraded, so the whole walk is now paved.

After slipping my way down the mountain, I was at the coast again. Looking up, I could see to where I had hiked down from, with sunlight filtering through the summit’s trees.

Just before the final narrow path that crosses the bridge to San Juan de Gaztelugatxe is another viewpoint, along with bathrooms & water fountains. The views from this spot are some of the most dramatic of the walk. This is the first time you can get a true sense of the scale of Gaztelugatxe towering above. 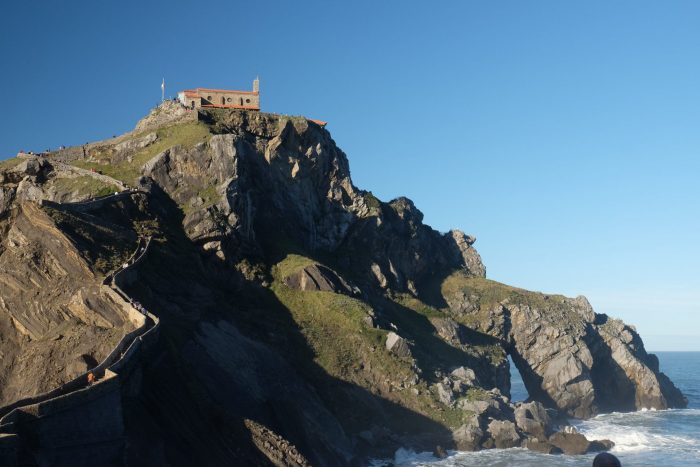 While Gaztelugatxe grabs your attention, the other layered cliffs & rocks along the Spanish coast are also breathtaking. This rare geological phenomenon (known as flysch) is one of the reasons why Game of Thrones was filmed here. It looks like a fantasy world. Mist from the turbulent waves only adds to the special effects. For even more flysch landscapes (and another Basque Game of Thrones filming location), visit Zumaia, near San Sebastián. 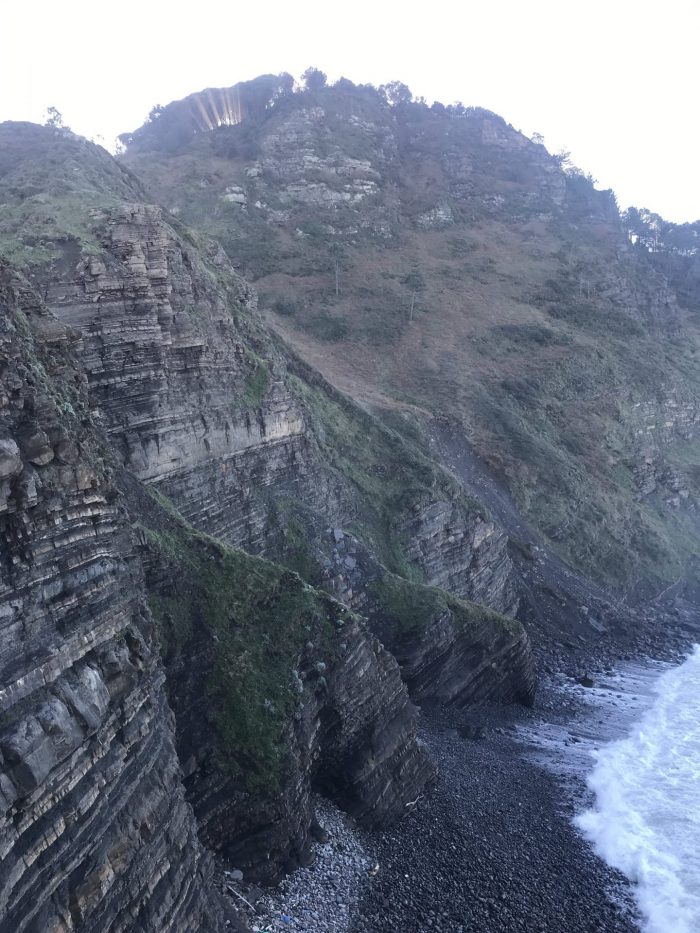 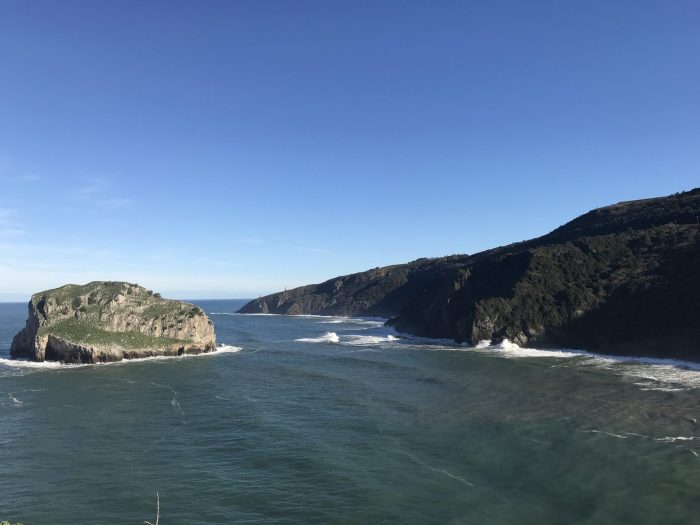 After taking in the views of islet, it was time to cross the stone bridge & make my way to the top of San Juan de Gaztelugatxe. The climb is 241 steps, which sounds daunting, but it was actually my shortest climb of the day. With plenty of passing places & resting points, it’s not bad at all. 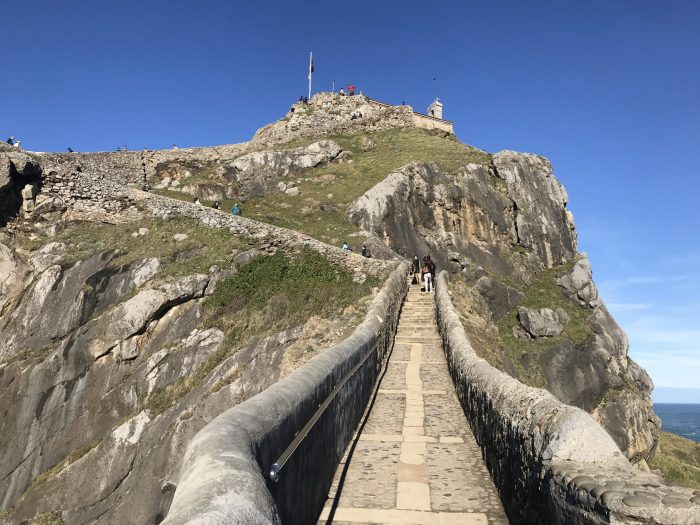 It’s easy to see how Gaztelugatxe is a place of religious inspiration. It’s simply a stunning walk. On a winter afternoon, the trail goes from the shade to the bright sunlight as if the doors to the world have been thrown open. The waves coming in from the Bay of Biscay were roaring, with the combination of the sun & mist reminding me of the California coast. 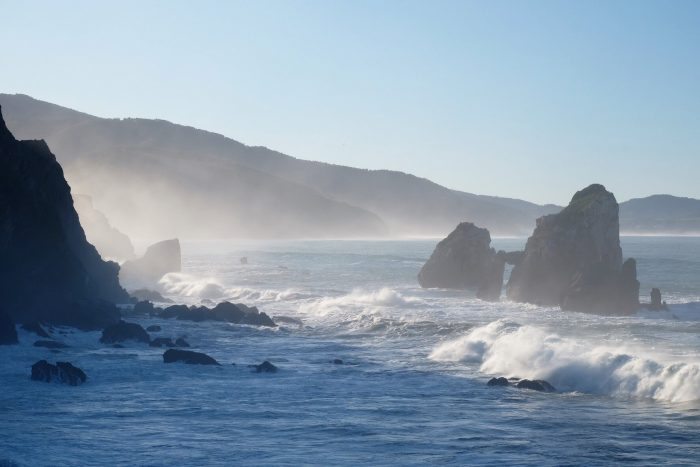 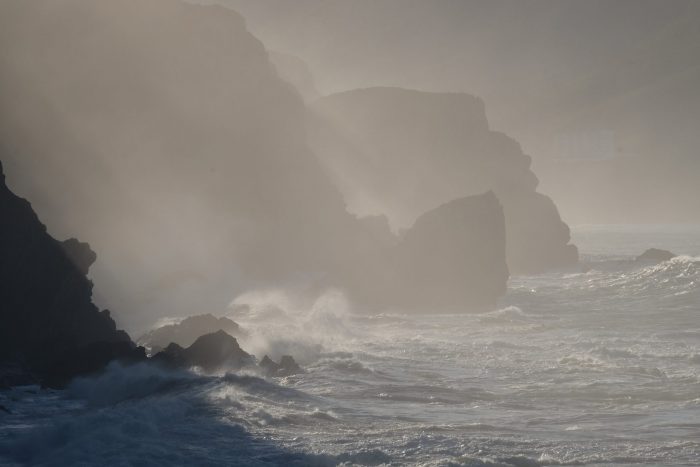 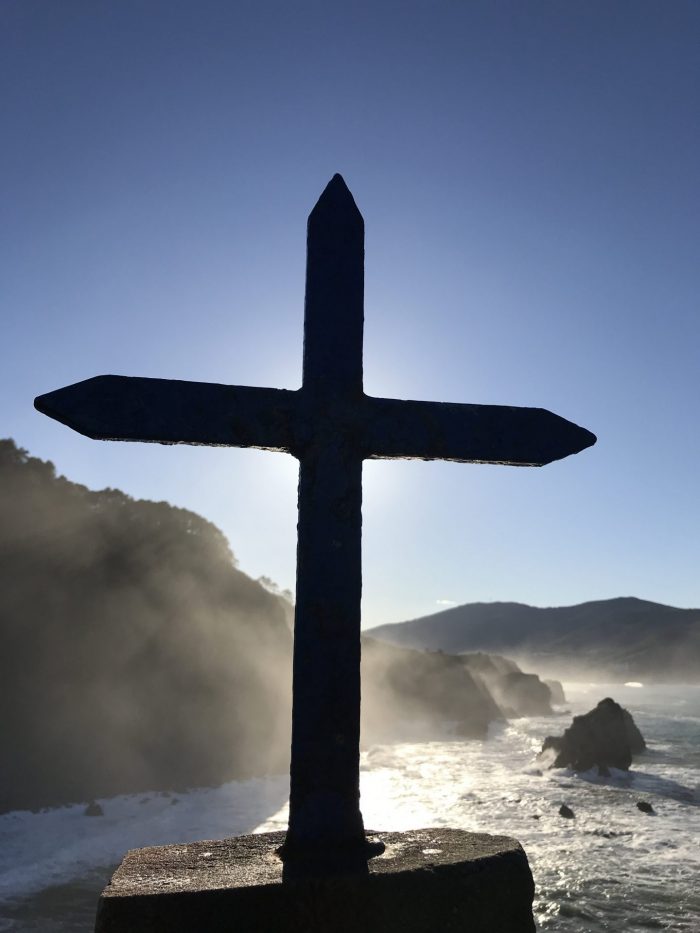 After a long trek of going up and down hills, I was finally at San Juan de Gaztelugatxe, the small church at the summit of the island. The original church was founded back in the 9th century. This hermitage has been rebuilt many times after fires & wars (but no dragons, as far as historians are aware). The church is dedicated to John the Baptist, who may have even visited Gaztelugatxe & left his footprint.

Upon arriving at San Juan de Gaztelugatxe, it is customary to ring the church bell three times & make a wish for good luck & to ward off evil spirits. This is why the sound of bells echos across the coast. 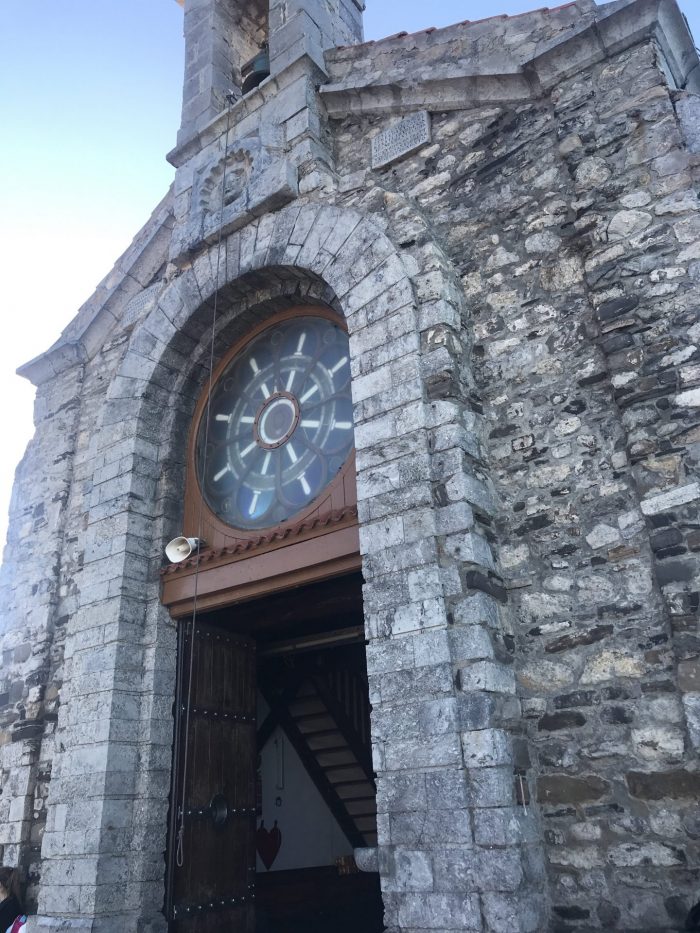 There’s a €1 fee to take photos inside the church. It’s a small place, with images of seafaring inside. Given the church’s position perched upon the coast, it has been a popular place for fishermen & sailors to come and pray for centuries, as well as for votive offerings made by sailors who survived shipwrecks. 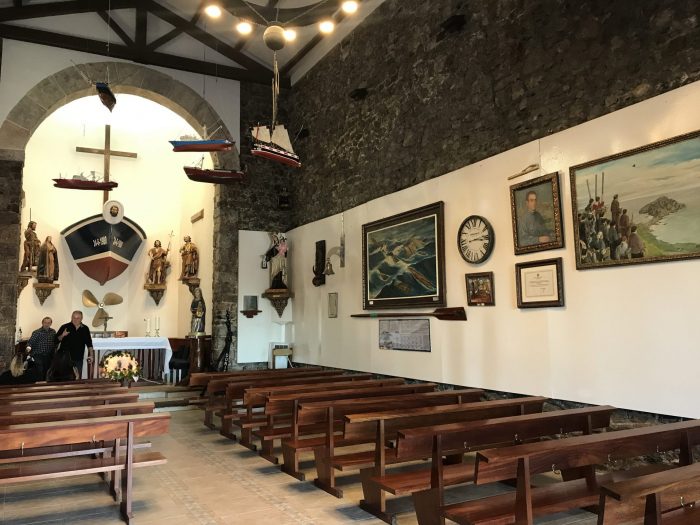 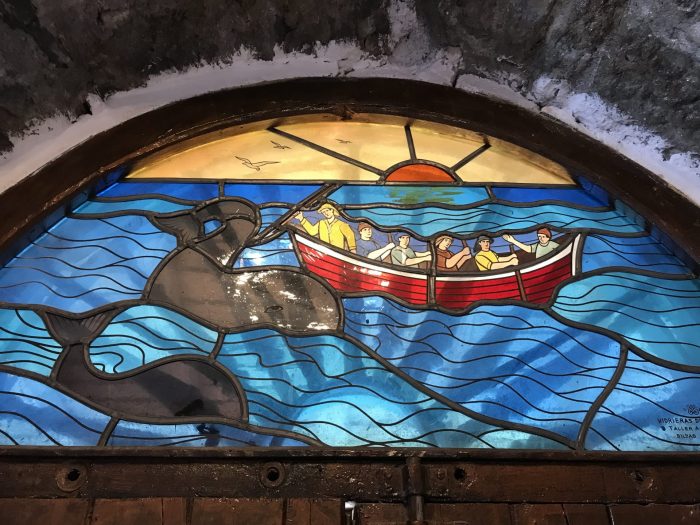 A small gift shop offers drawings, mementos, and cold drinks, including beer. It’s not often that churches sell beer, so who can pass up that opportunity, especially during a long hike?

Then it was time to begin the journey back, heading down the mountain just to go right back up, repeating the process in reverse. This time, the longer paved path was a more appealing option. 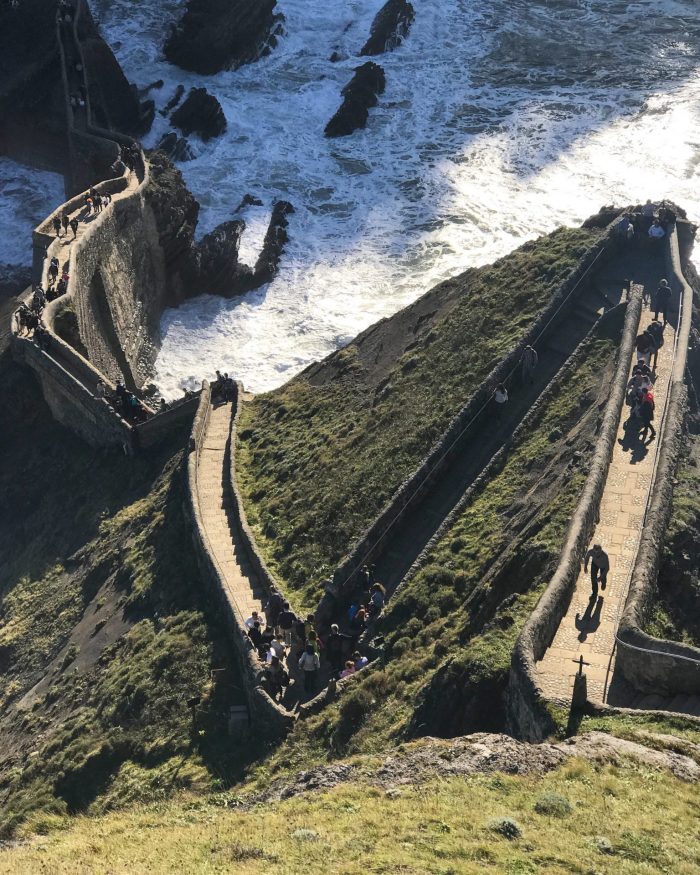 Not only are the views from a day trip to San Juan de Gaztelugatxe something you’ll remember for the rest of your life, the memories of the climb will stick with you for days, each time your legs burn as you take a step. When you make your wish after ringing the church bell, be sure to include hopes for a speedy recovery.

Or take a guided tour to make things a little bit easier.