Ramen is one of Japan’s most famous dishes. Each region of the country has their own popular style. Fukuoka is famous for being the home of tonkotsu ramen.

Tonkotsu ramen is not for the faint of heart. The broth is made by simmering pork bones for a very long time. How long? Some ramen shops boil the broth for up to 20 hours in order to get it to its proper thick, creamy, white consistency. The resulting broth is a heavenly mixture of salty fatty goodness. Noodles of course, are also crucial. Toss in some more chashu (sliced pork belly) & maybe a marinated soft-boiled egg, and you’ve got yourself a hug in a bowl. Over the course of my time in Fukuoka, I had tonkotsu ramen for nearly every meal, eating six warm bowls of it in total. Based on my not-at-all-scientific survey, here are the best places to eat tonkotsu ramen in Fukuoka.’

Presented in the order I ate them, I have rated each bowl on three factors: broth, noodles, and other ingredients.

Hakata Ramen Zen was my first ramen stop, which I went to only about an hour after I arrived in Fukuoka. It’s located down an alleyway near Tenjin station. I arrived to find a line both inside and out. That said, the line moves quickly, as people don’t dawdle over ramen. 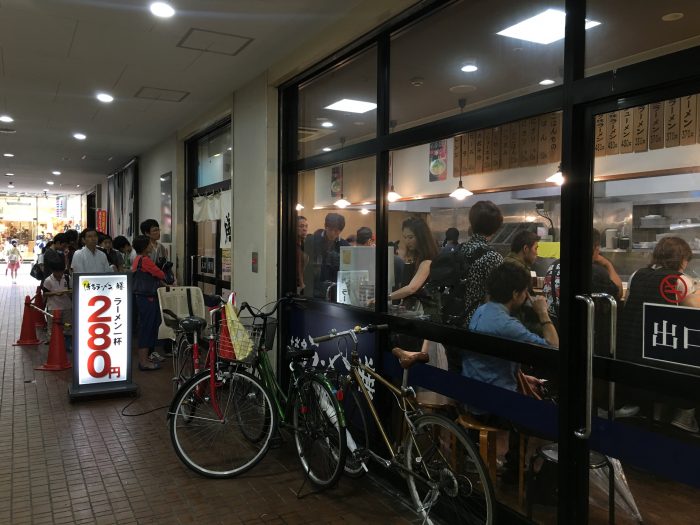 The major appeal here is that you can get a steaming hot bowl of tonkotsu for just 280 yen. That’s perfect if you’re traveling on a budget. I paid at the machine, then sat at the counter. 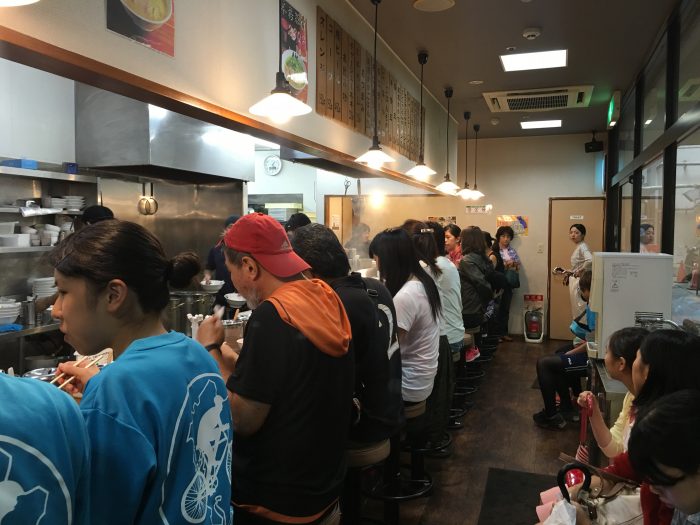 For my first bowl of tonkotsu ramen in Fukuoka, it wasn’t bad. I knew it wasn’t going to be my favorite place based on the price, but the broth was very good. The noodles were firmer than I like, and the other ingredients were lacking. There were just two thin chashu pieces, and no egg. 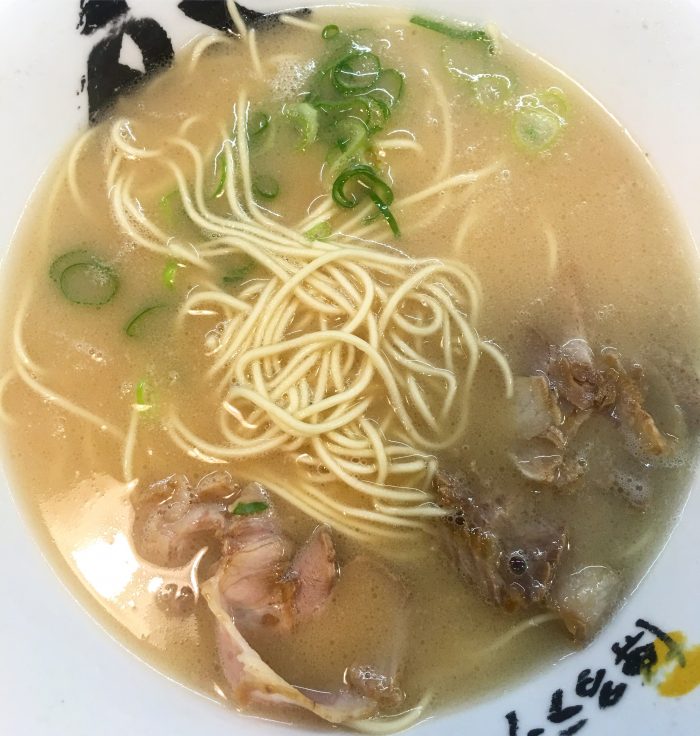 Shin Shin was also close to my hotel, near Tenjin. After waiting out the typhoon overnight, I arrived just before their opening at 11am. At 10:50am, the line was already 10 people deep, with more people quickly arriving after me. That’s how you know you’ve landed at a good spot. Autographs of famous customers cover the walls. 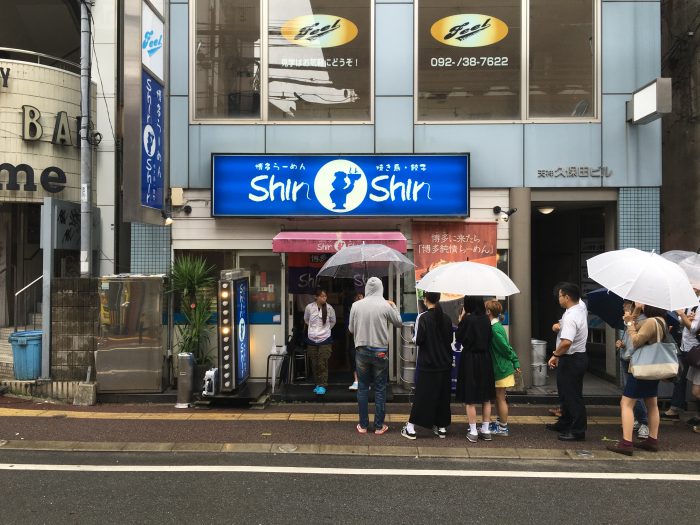 A bowl of tonkotsu ramen costs 600 yen, but there is a lunch special that also includes rice balls and four gyoza for just 790. I needed energy for walking, so I went all in. 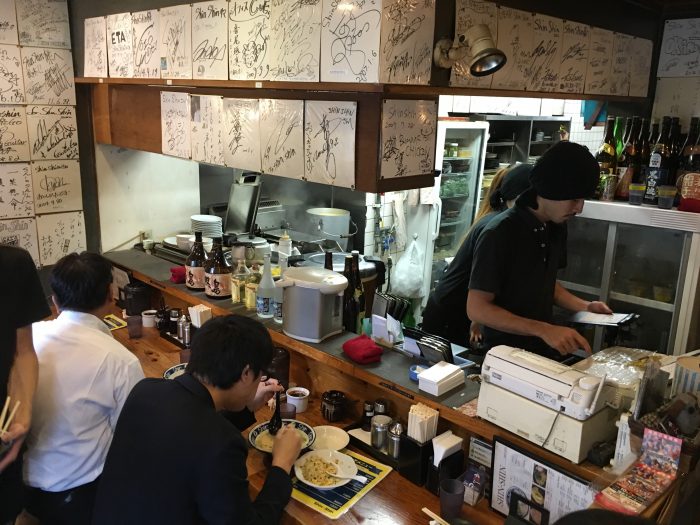 As with my first bowl of tonkotsu ramen in Fukuoka, there was no egg. However, the finely-cut green onions mixed in well, and there were three thick slices of chashu. Put that together with good noodles and good tonkotsu broth, and this was an excellent bowl. 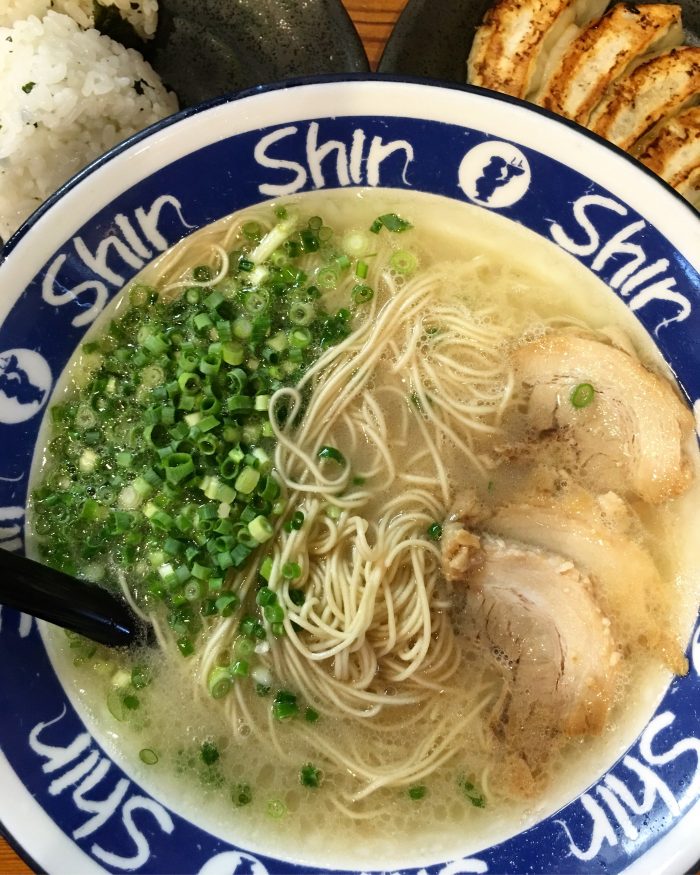 On the 5th floor of the Canal City shopping & entertainment complex sits Ramen Stadium. Once you’re in the mall, there are plenty of signs telling you where to go. There are 8 different ramen restaurants inside, each with different styles from all over Japan. Having done my research beforehand, it seemed like Shodai Hidechan had the most popular tonkotsu at the Ramen Stadium. 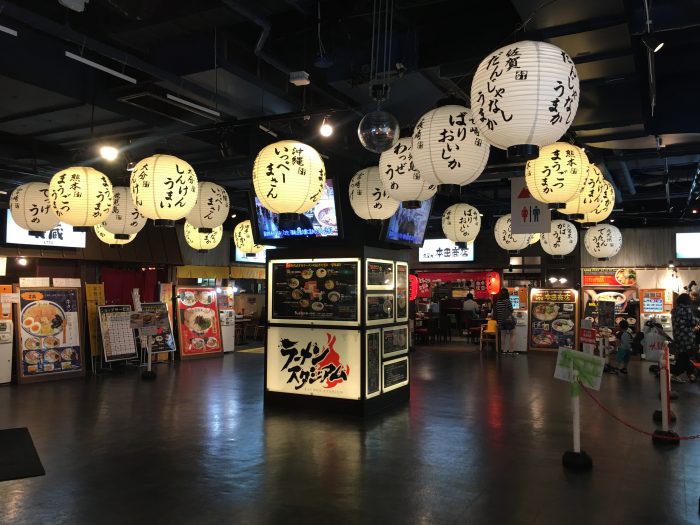 I arrived around 3:30pm, so the stadium & restaurant were quiet. I don’t know how crowded it is at other times, but that’s a good time to go. 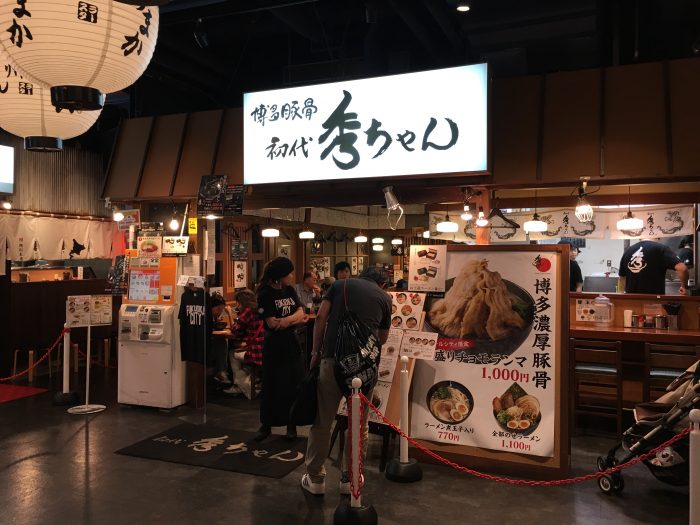 The broth was decent, but not as good as other tonkotsu I’ve had. The noodles were good. I finally got an egg with this bowl of ramen, but the trade-off was that there was only one piece of meat. Also, there were bean sprouts, which I’m not a huge fan of in ramen. 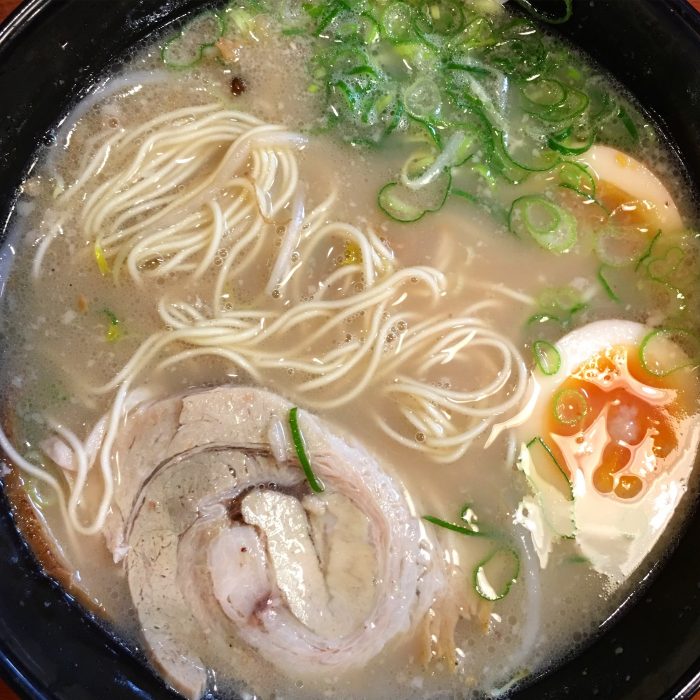 My 4th stop for tonkotsu ramen in Fukuoka was at Hakata Issou, near Hakata station. I arrived 10 minutes after their 11am opening, and there was still a short line outside even though the inside seats had just been filled. 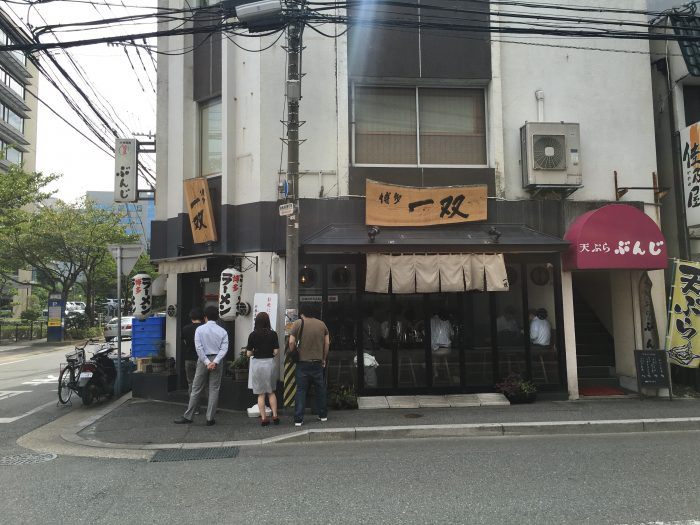 The wait wasn’t too long, and after a bit of assistance with ordering from the Japanese-only machine, I sat down in my spot. There was good air conditioning & fans creating a nice cool breeze, which is nice since it’s a small restaurant with giant pots of soup being cooked in the center of it. There were four main options: plain ramen, egg ramen, chashu ramen, or both egg & chashu ramen. Naturally, I picked the combo. At 850 yen, this was a bit pricier than other ramen restaurants in Fukuoka, but it was only barely so, and it was worth it. 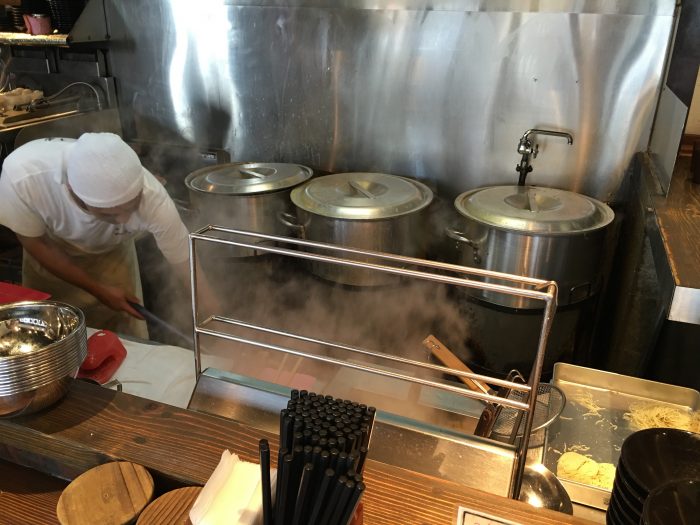 If this wasn’t the perfect bowl of tonkotsu ramen, it was darn close. It was the best broth I’ve ever eaten. Look at that color. The restaurant reeked of the pork goodness, and I could feel it on me for the rest of the day. The noodles were also great. There were so many pieces of chashu, of course, plus a nicely done egg. 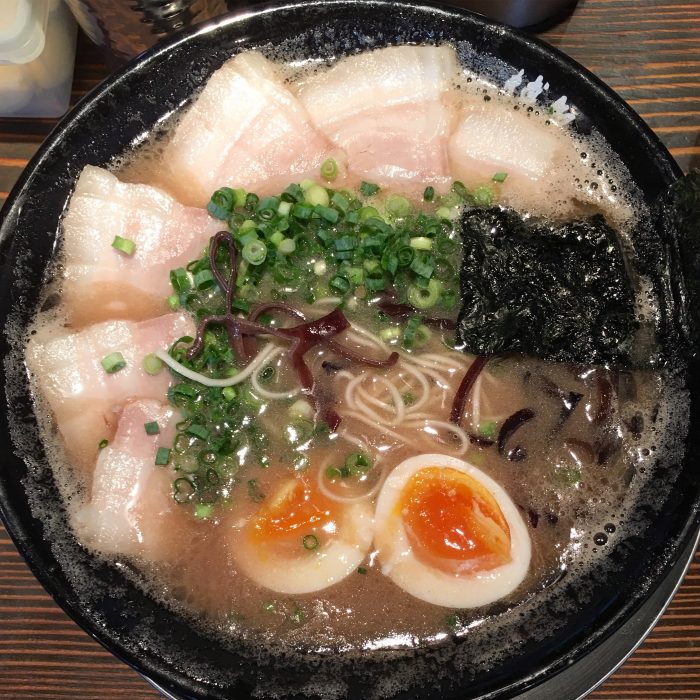 Kurume Taiho Ramen, my 5th ramen stop, was just south of Tenjin station. Once again, I arrived just as the restaurant was opening. I was the only person there when the doors opened, but others showed up right at 11. 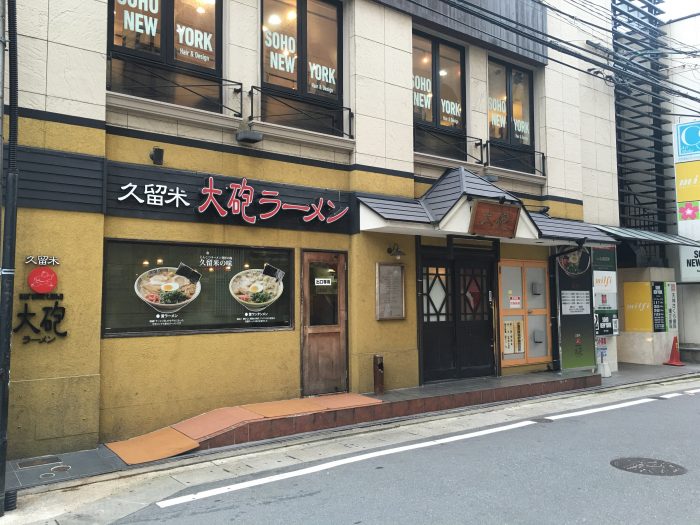 There was a ton of room inside compared to some of the other ramen places, but I sat near the kitchen. Instead of water, there was cold green tea. Different, but very nice. My bowl of ramen was 650 yen. 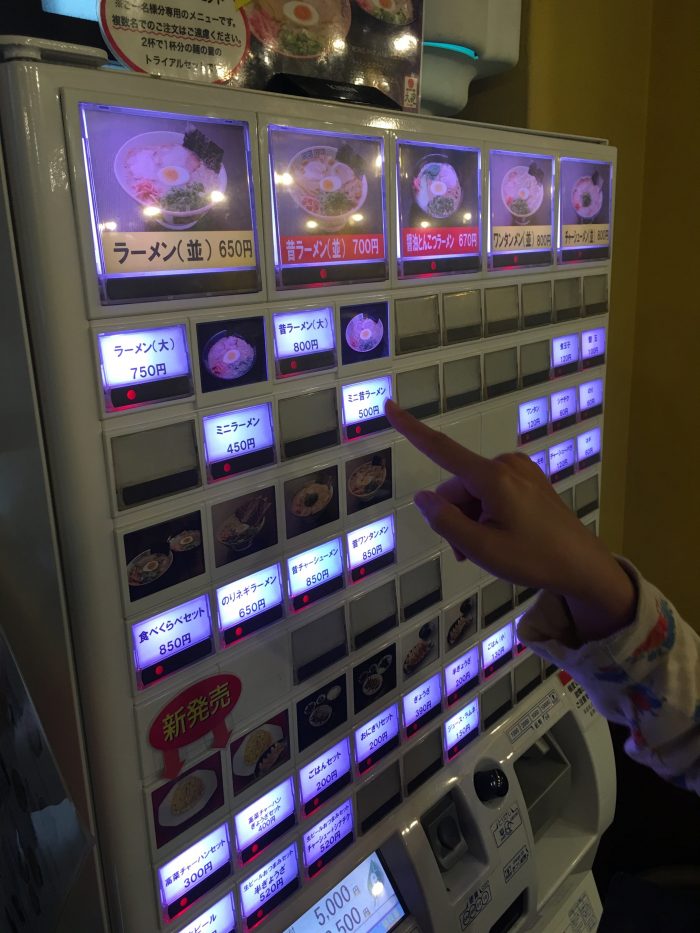 The clear star of the ramen at Kurume Taiho was the broth. It was frothy & nearly opaque. The noodles were unfortunately on the chewy side, and the ingredients were a bit lacking as well. There were only a couple of thin slices of pork, and the egg was a bit overdone. 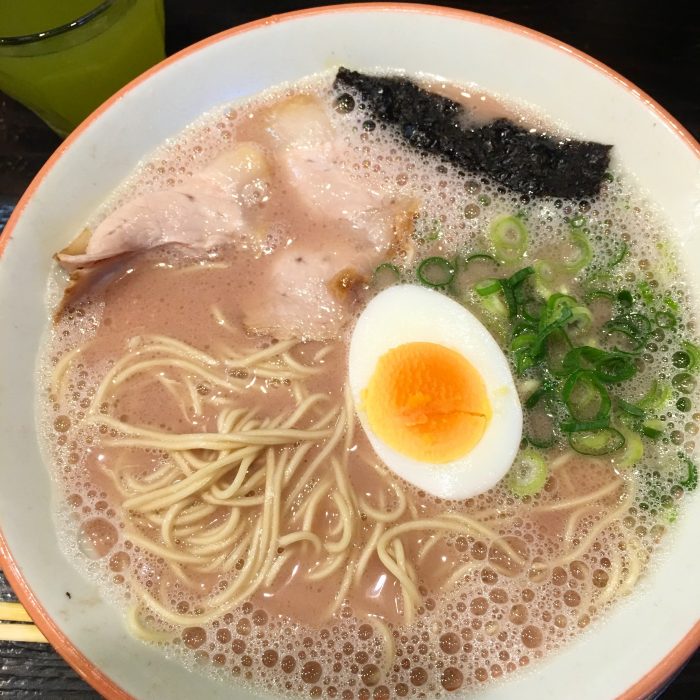 On my final morning in Fukuoka, I headed off to squeeze in one last stop for ramen at Ganso Nagahamaya (元祖 長浜屋), which opens at 4:30 am and closes at 1:30 am. It’s best late night all day option out there. You’ll notice though, that’s not the name of the restaurant I’ve listed at the beginning of this section. 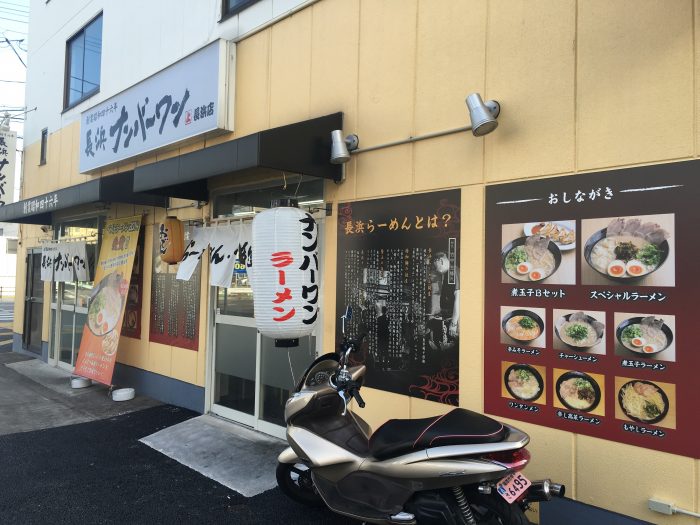 The issue is that Google Maps was unclear about where Ganso Nagahamaya was, and I accidentally ended up in Nambawan instead. Both are located around the corner from each other, a short walk from Akasaka station. I arrived around 10am and was the only person, but this isn’t a busy area. I got the regular ramen for 660 yen. Even though it wasn’t the restaurant I’d intended to go to, it was still good. There were still autographs up on the walls, so at least I didn’t waste my time in some subpar spot that nobody goes to. 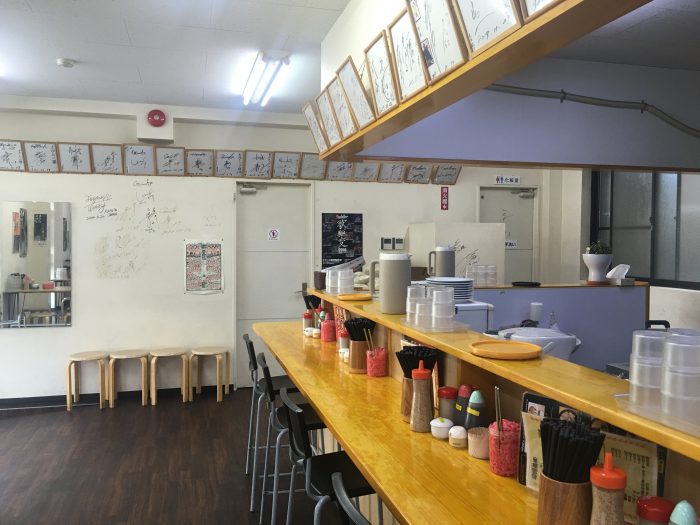 The noodles were actually my favorite of the ones that I had. The broth was also good, though just a step down. As far as ingredients, there were too many green onions for my liking, but otherwise it was a good bowl of ramen. 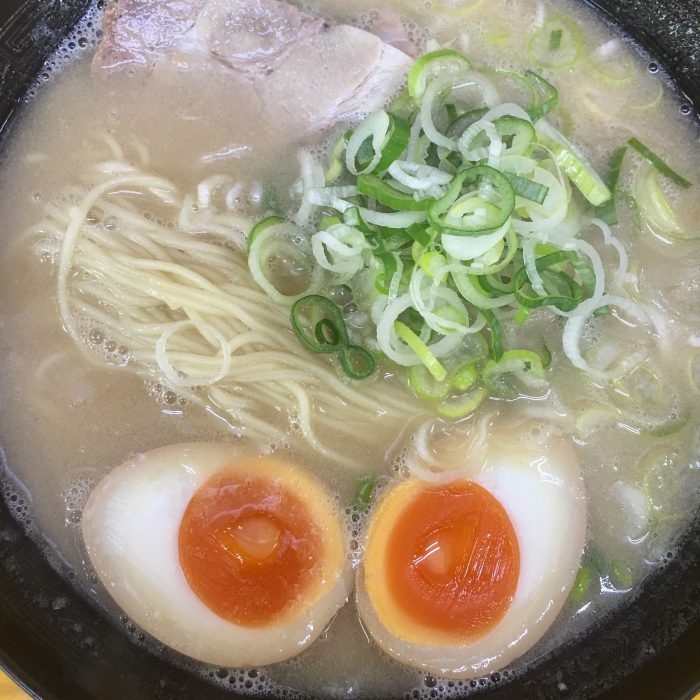 In summary, here are my final rankings of the best tonkotsu ramen in Fukuoka:

Of course, it goes without saying that everyone will have different ramen preferences when it comes to the broth, noodles, and other ingredients. I had a lot of fun trying to get to as many places as possible during my few days in Japan. I don’t mean this to be a definitive guide, it’s just what I like, plus there are even more ramen restaurants in Fukuoka beyond these. There are so many options that this hopefully narrows down a few decent tonkotsu ramen options for you to check out if you’re visiting. If you find some other great spots or if you decide to do your own ambitious tour like this, let me know in the comments!