Getting an American Airlines saver award in business class on their flights from Los Angeles to London Heathrow is next to impossible. When I saw one available for the time period I wanted to go to Europe in December, I jumped on the rare chance. The flight from LAX to London was the 2nd and longest part of my journey, after having flown from San Francisco, then eventually on to Oslo, Norway. My one way business class award cost 50,000 miles (5,000 of which was refunded thanks to having an American Airlines credit card) plus $104.60 in taxes & fees. The award chart has since changed, so now that same ticket would set you back 57,500 miles.

My flight from San Francisco landed late, plus we were at the awful American remote terminal at LAX. As a result, I only made it to the gate 15 minutes before boarding. I had hoped to be able to visit the excellent Oneworld Lounge at LAX, but I would not be able to on this trip. I did at least get to meet the new SFO therapy pig before I departed San Francisco. 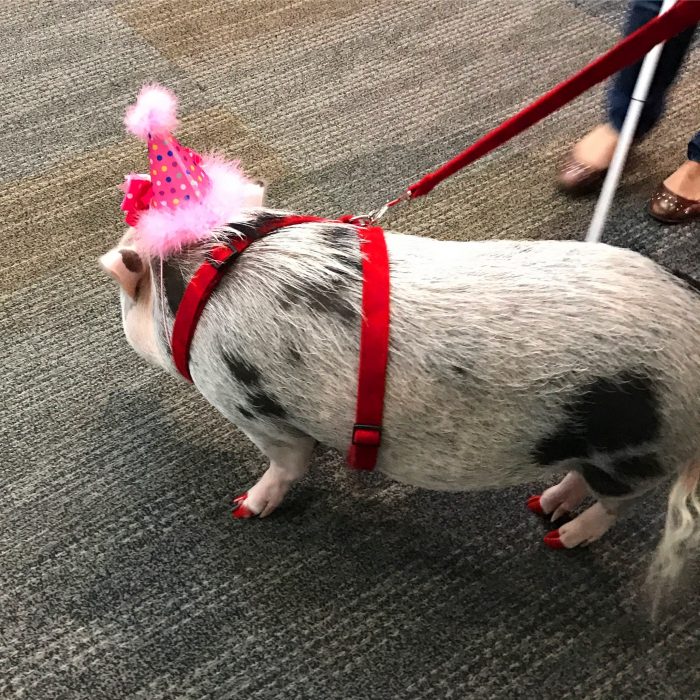 This was actually my second time flying in business class on American from Los Angeles to London, having previously flown on the Boeing 777-300ER. This time, I would be flying on a Boeing 777-200. 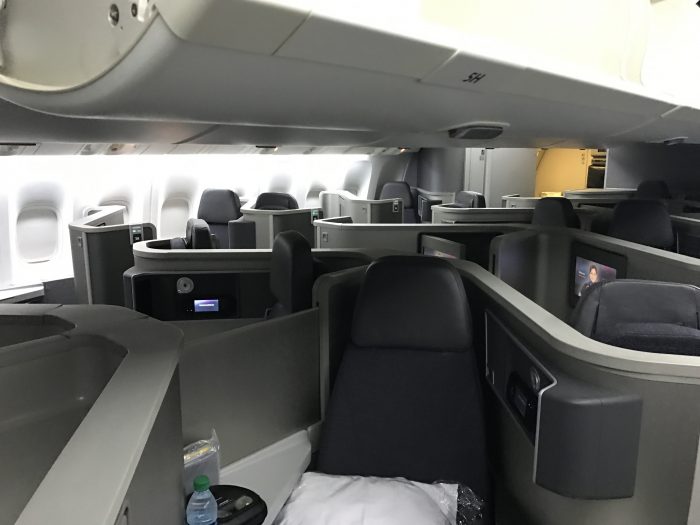 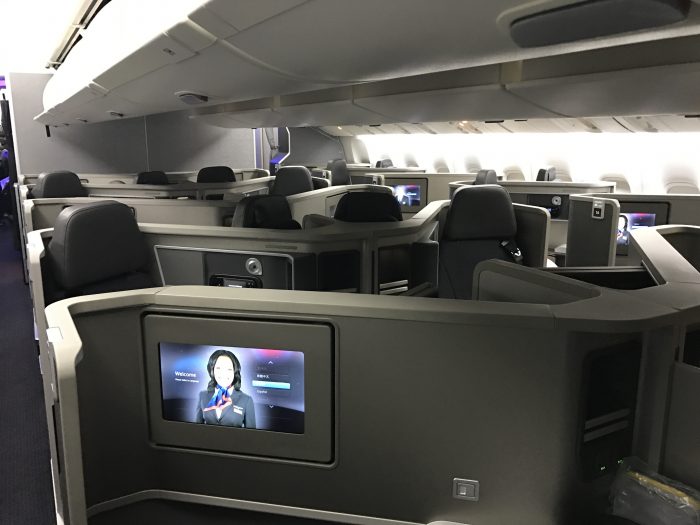 American Airlines is in the process of refurbishing many of their planes, including the Boeing 777-200. As a result of some manufacturing issues, there are actually a couple of companies that are providing business class seats for this aircraft. Unfortunately, some of these are from Zodiac, the provider on this particular flight. One issue with the Zodiac seats is that most of them are attached in pairs. If one person moves, the entire set of two rocks back and forth. 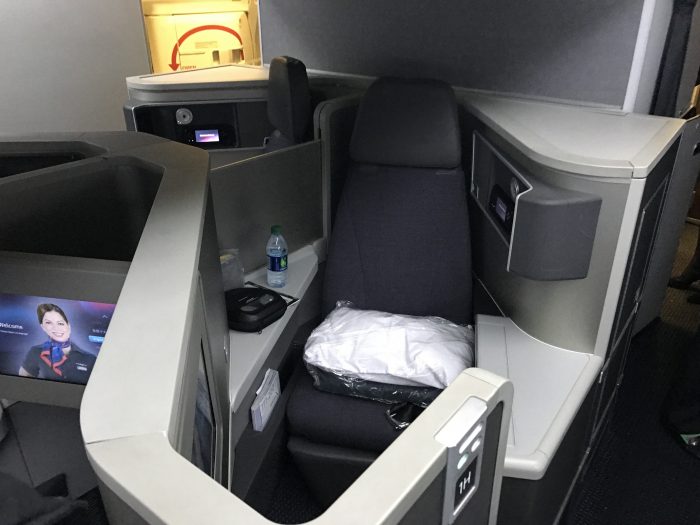 The seats are arranged in a 1-2-1 formation, alternating between rear-facing and forward-facing. Having researched all of this, I had selected seat 1H, a forward-facing seat that was not attached to any others. I would end up trying out one of the attached seats on my return flight from London. This was my first time sitting backward on a flight. Aside from takeoff and landing, it didn’t feel any different. Taking off while facing forward is odd, as during acceleration you are thrown forward into nothing rather than being pushed backward into your seat. 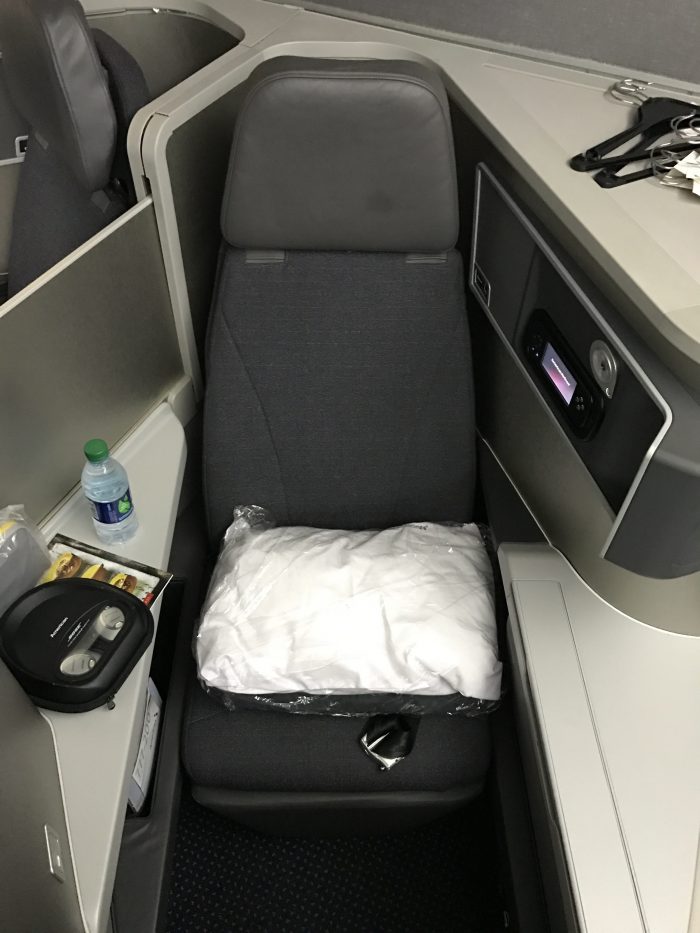 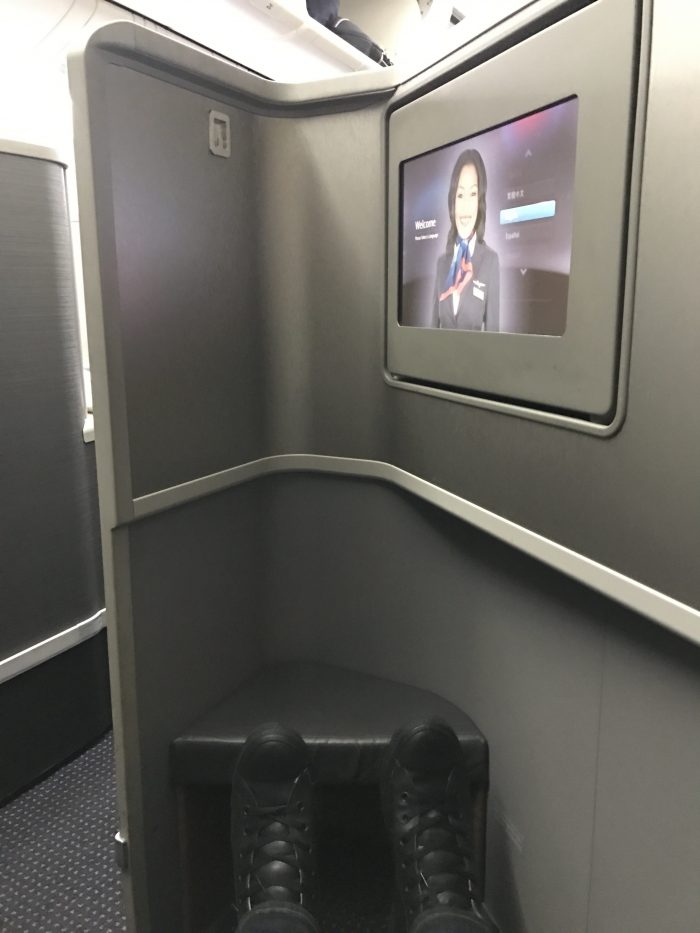 Somehow, despite feeling like there’s a decent amount of space for yourself in these seats, there’s very little storage space. I could barely fit a water bottle in the space provided, never mind anything else I may have wanted to keep nearby. There were two universal outlets plus two USB ports, in case I wanted to charge every device I own. 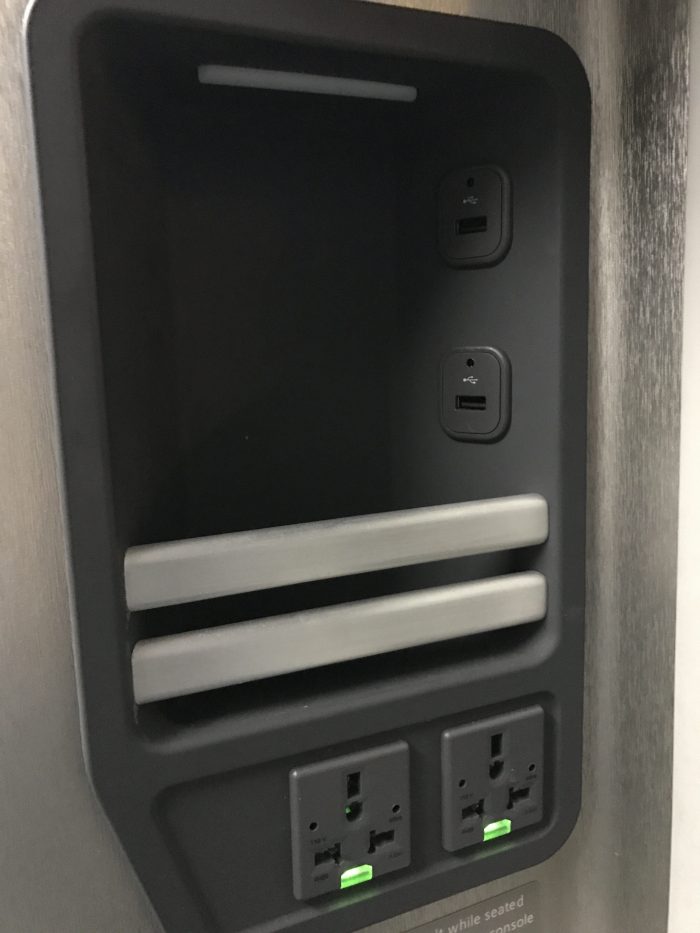 While I waited for everyone else to board, I got situated & checked out the rest of the seat. It had lots of fancy touchscreen things to play with. 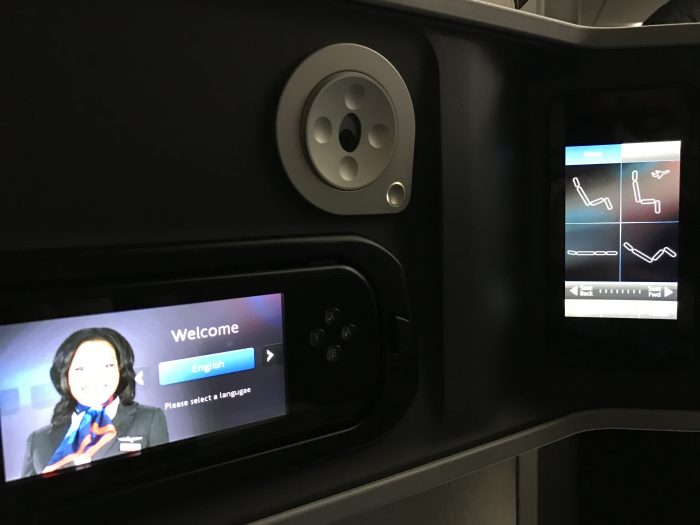 While I figured it all out, I sipped a pre-departure champagne. 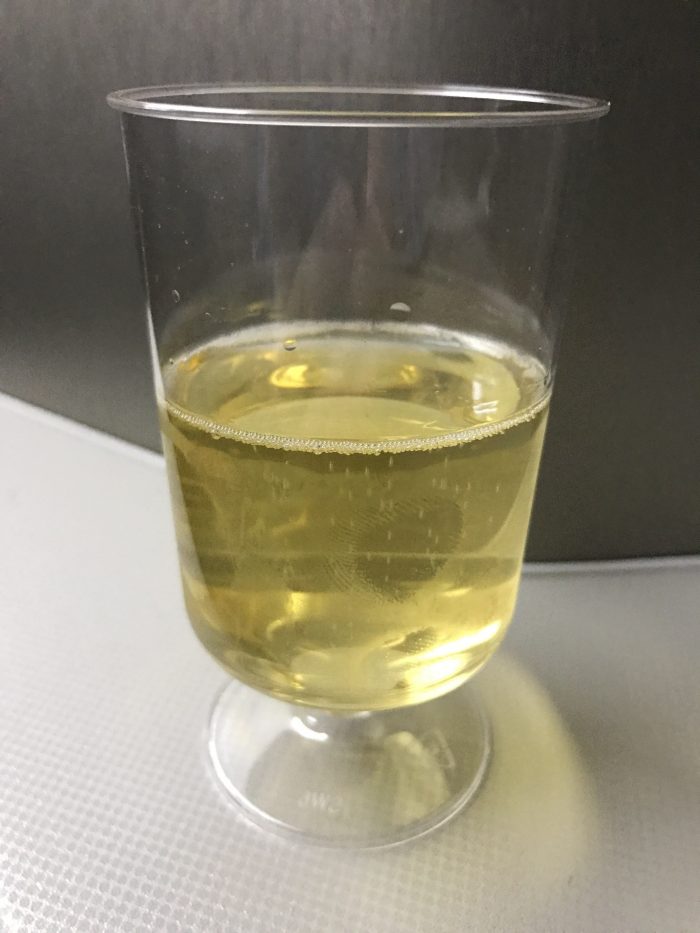 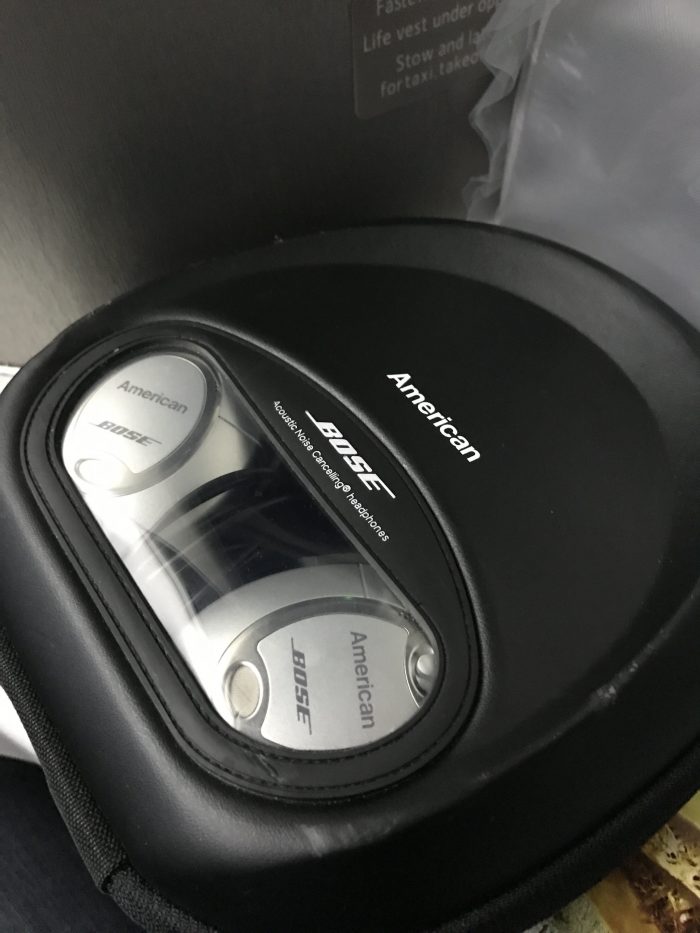 The amenity kit was from Cole Haan, with the usual basic items included. The yellow was an odd design choice for American. I’m not sure why they were using them, as it’s not even remotely close to being one of their colors. 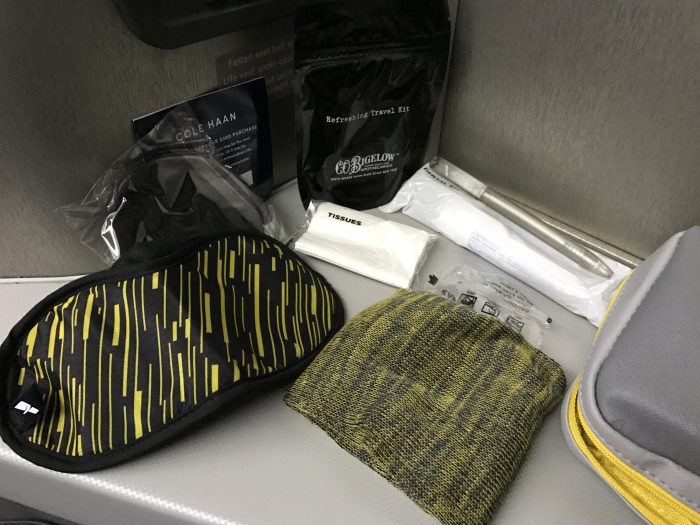 While I was exploring the seat, I listened to a whiny dude and his family with two young kids. This guy complaining about everything gave me a better appreciation for the flight. I know that this is a review, so I am fair about the pros and cons of the experience. At the same time, I am appreciative of the opportunities that I have to fly like this. Yeah, I was on an American Airlines award ticket, but flying in business class is not something that everyone is able to do, especially on a long flight from Los Angeles to London.

Speaking of, the flight time was scheduled for 9 hours and 30 minutes. We took off almost 40 minutes after our scheduled departure time thanks to some delays, plus lots of taxi time. Thanks to favorable winds, we would make up all that time in the air. Usually, the flight is longer than that.

As we were taxiing, I started browsing through the inflight entertainment selection. Usually, December is pretty good for inflight movies, since award season is coming. Usually you can catch some releases that may not have been widely distributed. However, this year, American’s selection was on the disappointing side. There were some decent movies, but they were all from 6 months earlier. I settled in and started watching the new Ghostbusters movie, which was fine.

American also has a few channels of live TV available, which is cool if some sporting event or news happens to be on while you are in the air. Wifi is also available at a reasonable price, though I didn’t need it this time, unlike when I had flown in July and needed to find out details about attending People’s Sunday at Wimbledon.

After we were in the air, service started with a warm towel. The flight attendant came around and took drink orders, which were served with warm nuts. I had a Woodford Reserve & ginger ale. 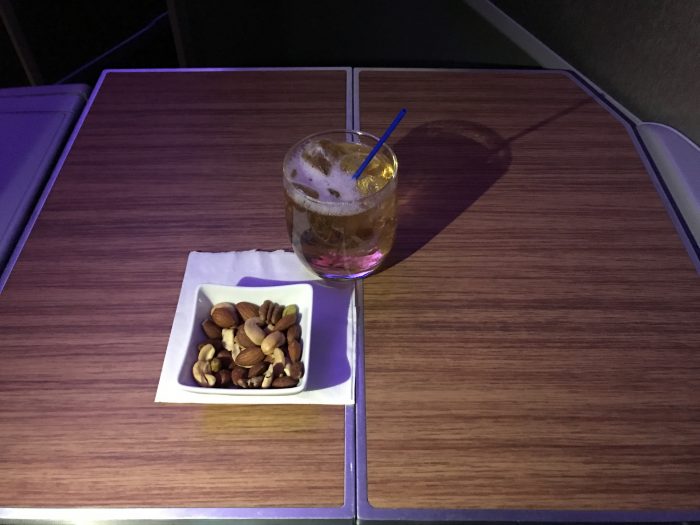 I like the sense of humor of American Airlines’ flight attendants. The ones who get to work in business class are more senior and have seen it all, so sometimes you can get cranky people, but lately I’ve been finding that for the most part they are pretty good humored if you’re not being a jackass. On this particular flight, there was no surliness at all, just the right amount of friendliness & humor.

The plane and the seats were all brand new, so I helped one of the flight attendants find out the headphone jack since neither of us knew where it was. Then she was able to tell other people who were asking, which she appreciated. When I selected pretzel bread from the bread basket later on, she says “yeahhhhh” because she obviously knows pretzel bread is the best bread option too. Later on, I would burn all of that goodwill when she walked past just as my entertainment screen was showing a scene from The Nice Guys that had a bloody, topless woman in it. I have no idea what she thought I was watching, nor was I going to try and explain. For the record, The Nice Guys is an excellent movie.

Here are the full American business class menus from Los Angeles to London: 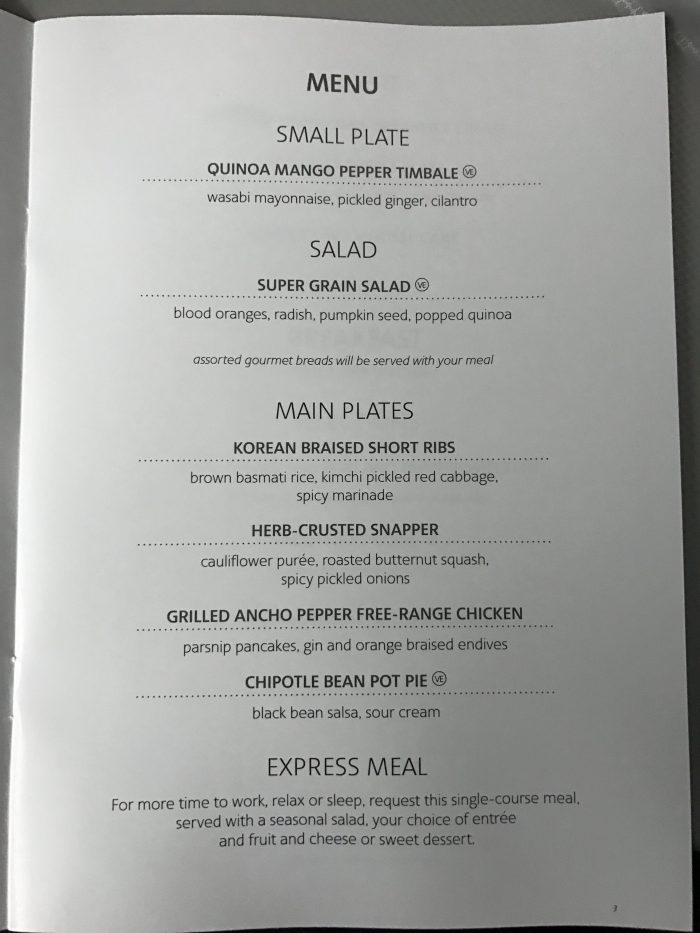 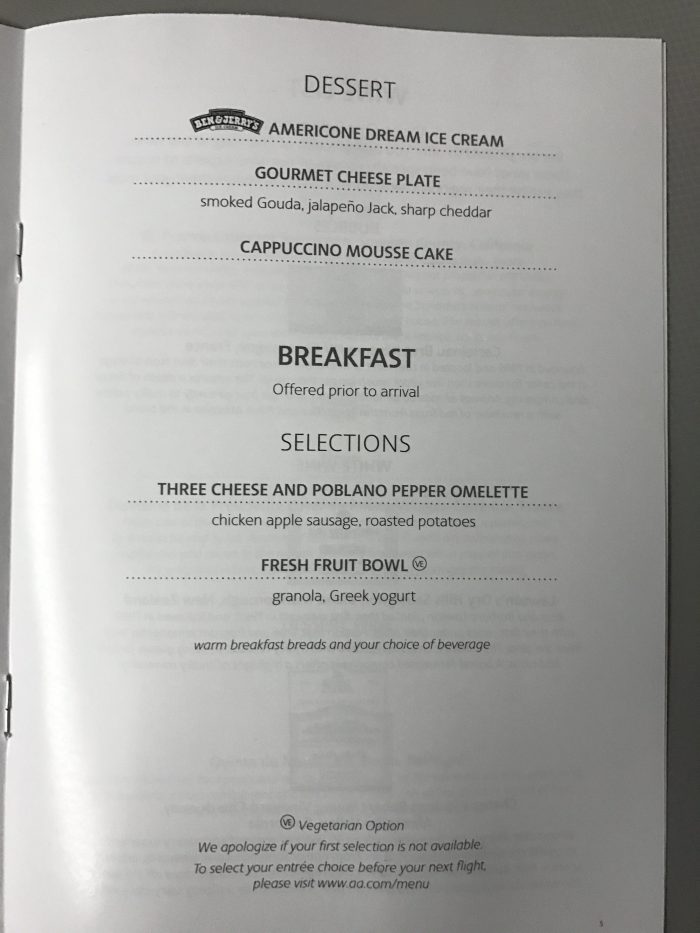 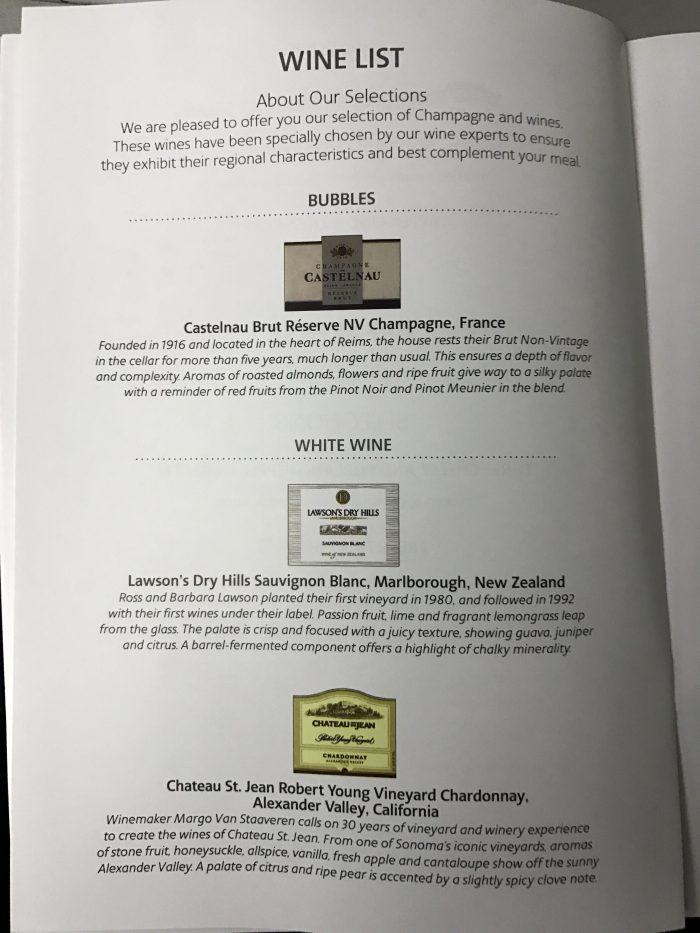 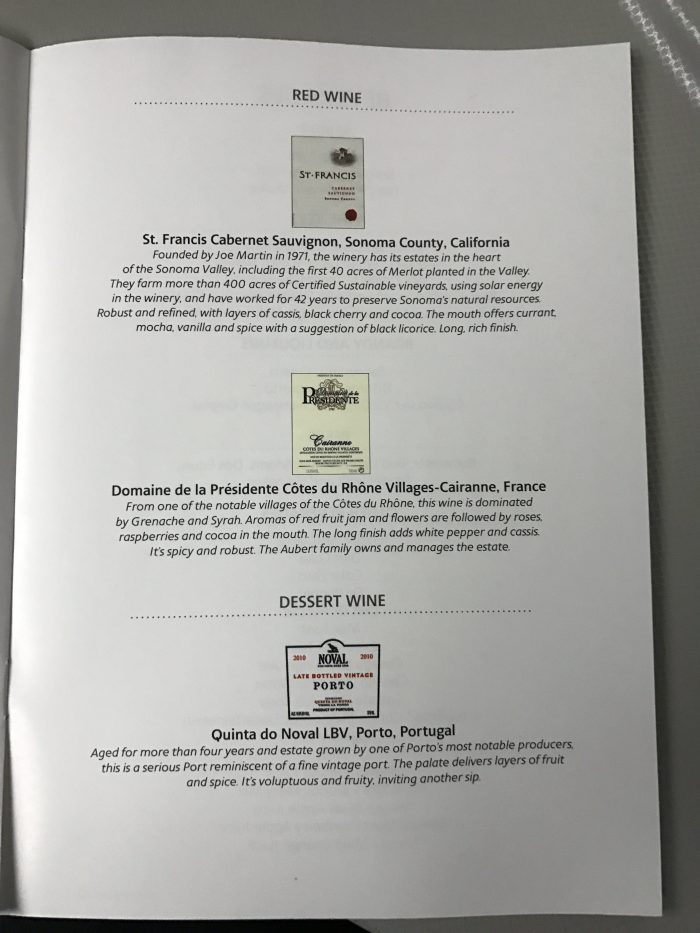 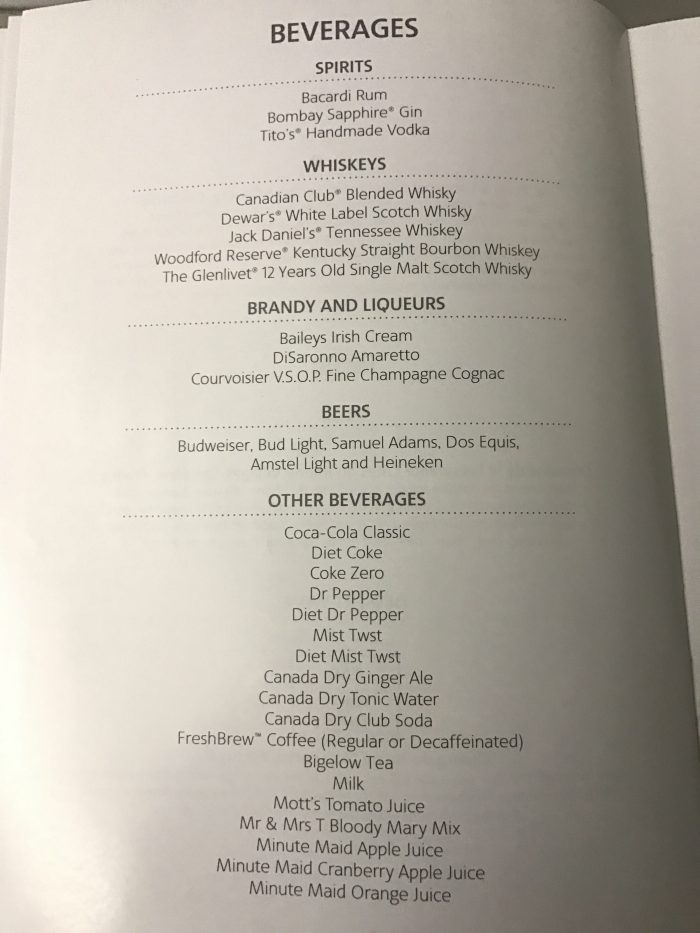 The table in these new seats is massive. It was so big that the tablecloth only covered about 2/3rds of it. 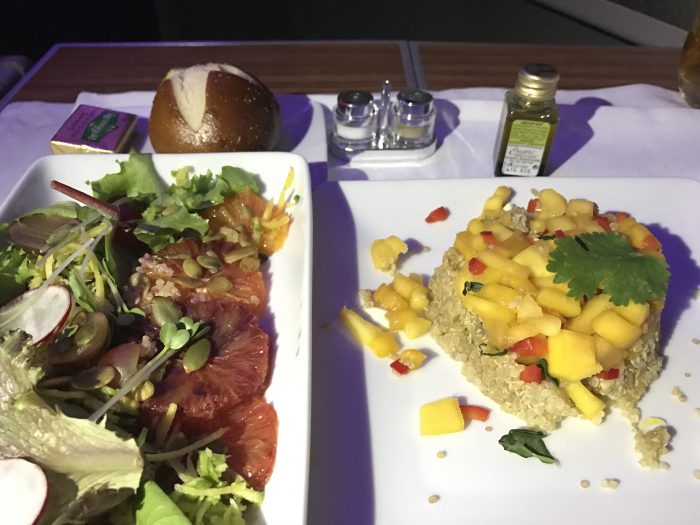 The meal started with a quinoa mango pepper timbale. It was different, in a good way. I like mango, and the texture of it all worked well. It did take about an hour for it to arrive after takeoff, but the rest of the meal was served at a decent pace as I finished each course.

Served along with this was a super grain salad with blood oranges, radishes, pumpkin seeds, and popped quinoa. American has not only created some interesting dishes, but they are healthy options as well. I end up in a lot of craft beer bars when I’m traveling, so it’s good to try and eat some healthier meals in between.

I had preordered my main course, since the one of the dinner options sounded excellent. Unlike the previous time I had attempted it, the online menu was correct. I had the Korean short ribs with basmati rice, cabbage, and a spicy marinade. 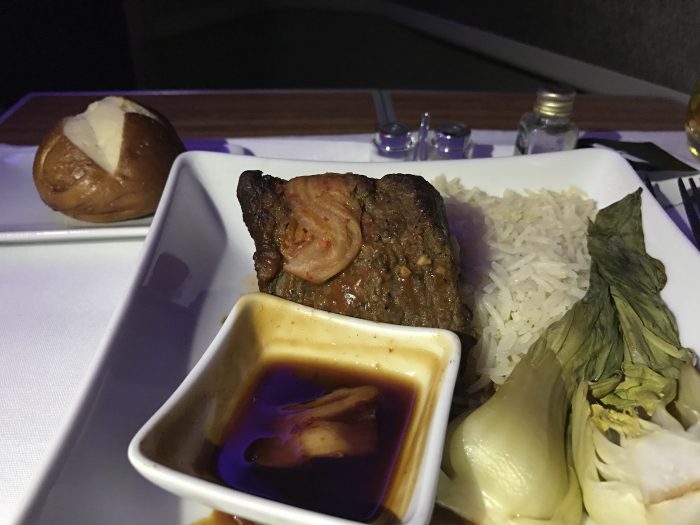 I rarely say this about airplane food, even in business class, but it was phenomenal. It was one of the best inflight meals I’ve ever had. The spicy marinade was legitimately spicy & flavorful, and the meat was cooked perfectly. The cabbage wasn’t particularly kimchi-like, but it was still decent.

Of course, to counter the healthy appetizers, I had to have some Americone Dream, which is one of my favorite Ben & Jerry’s flavors, and a glass of port, which always helps me sleep on planes. I’m only human! 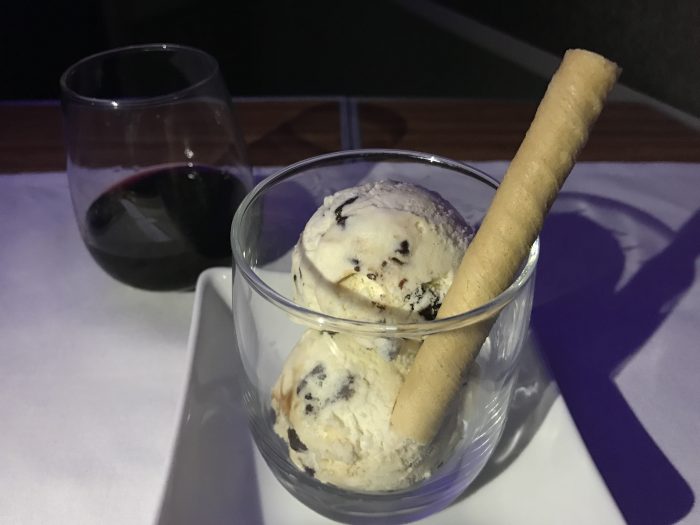 After my second movie, it was time to put the bed into lie-flat mode and go to sleep. There was some constant light to medium turbulence for much of the flight, so I didn’t sleep especially well.

Unable to sleep more, I got up for breakfast. The omelette wasn’t anything spectacular, but it wasn’t bad. 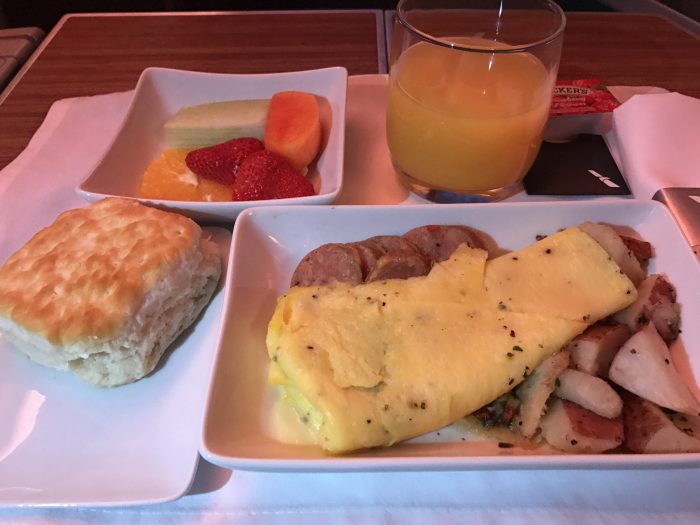 After breakfast, I waited in a surprisingly long line for the lavatory. There is only one restroom at the front of the business class cabin on American’s Boeing 777-200s, despite there being 5 rows in the front business class section vs. 4 in the rear section. Unfortunately, a lot of people from the front section don’t realize there are more restrooms behind them. This issue was made worse by people who insisted on conducting their full morning routines in the lavatory even though other people were waiting. If there is a queue, everyone should go to the bathroom, brush their teeth, do anything medically-necessary, and then let the next person use the lavatory. This isn’t your house, other people may really need to use the toilet. Anything else that is part of your routine can be done in the airport, or when there aren’t people waiting.

The turbulence had been caused by those favorable tailwinds that helped us make up time. I had all afternoon to make my connecting flight, so it didn’t matter to me if we got to Heathrow early. In fact, we ended up waiting for 45 minutes because there wasn’t a gate. Heathrow had gone into full meltdown that day thanks to some fog. I would end up having a very frustrating layover in London. My next flight to Oslo on British Airways was delayed by 4 hours, then brought forward to the original time, at which point I left the British Airways North Galleries Club Lounge I had been hanging out in, then it was gradually pushed back in 15 minute increments until we departed 4 hours late anyway. At least I should get some EU compensation out of it, but it was a long day.

American Airlines’ flights from Los Angeles to London are one of their showcase routes, so the planes & cabins tend to be shiny and new. The flight attendants on the route tend to be better, at least based on the few times I’ve flown it. The business class service was outstanding. The food was surprisingly good. The new Zodiac seats on the Boeing 777-200 are fine provided you can get one that isn’t attached to another. Overall, American’s business class offering might not stack up against the best foreign carriers, but it’s pretty good for an American carrier, especially on the long flight from Los Angeles to London Heathrow.