American Airlines’ longest flight to Europe is from Los Angeles to London Heathrow on a Boeing 777-300ER. As such, it’s the best value for a premium cabin award redemption if you can manage to snag a seat.  With fairly limited availability, that can be hit or miss. At just 50k AAdvantage miles + $5.60 (pre-devaluation, of course), nearly 10 hours of flight time in business class was a great deal. That price also included my flight from San Francisco to LAX in first class.

The SFO-LAX leg of the flight was uneventful. Once at LAX, I had a few hours for a layover, so I visited the LAX Oneworld Business Lounge, which I have written about previously. I had a couple of local craft beers while I waited. 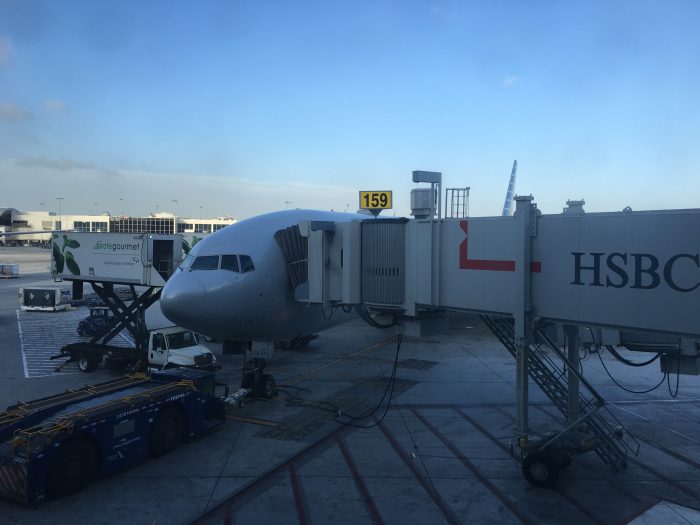 Finally, it was time to depart. Boarding was only done through one door at the front of the plane, so everyone passes through both first and business class. Thankfully, all passengers were funneled into the first aisle of the two until they were past the business class section, so anyone sitting on the far aisle of business or first has a much quieter boarding experience thanks to nobody passing by. 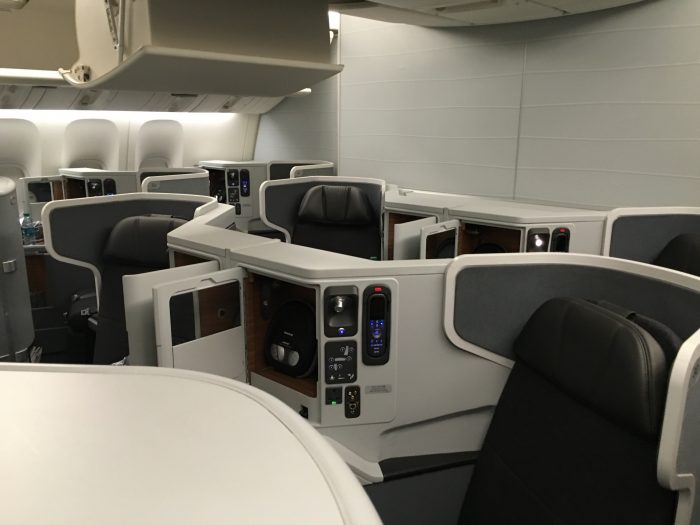 I was in seat 3J, on this quieter aisle. The seating for American’s business class section on the Boeing 777-300ER is a 2-2-2 configuration, with a more private little business class cabin that consists of just two rows in between first class and the galley, much like on Cathay Pacific. This is the best section to sit in, as it’s the quietest, and seemed to draw extra attention from the crew. 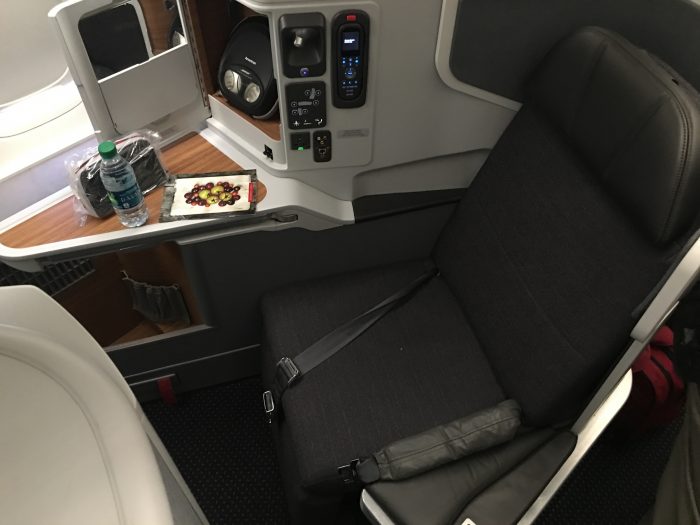 The only drawback of seat 3J is that you only have one window, while the seat behind you has two. That’s not a huge deal, and the slightly expanded foot space due to no seat in front of you more than makes up for that difference. 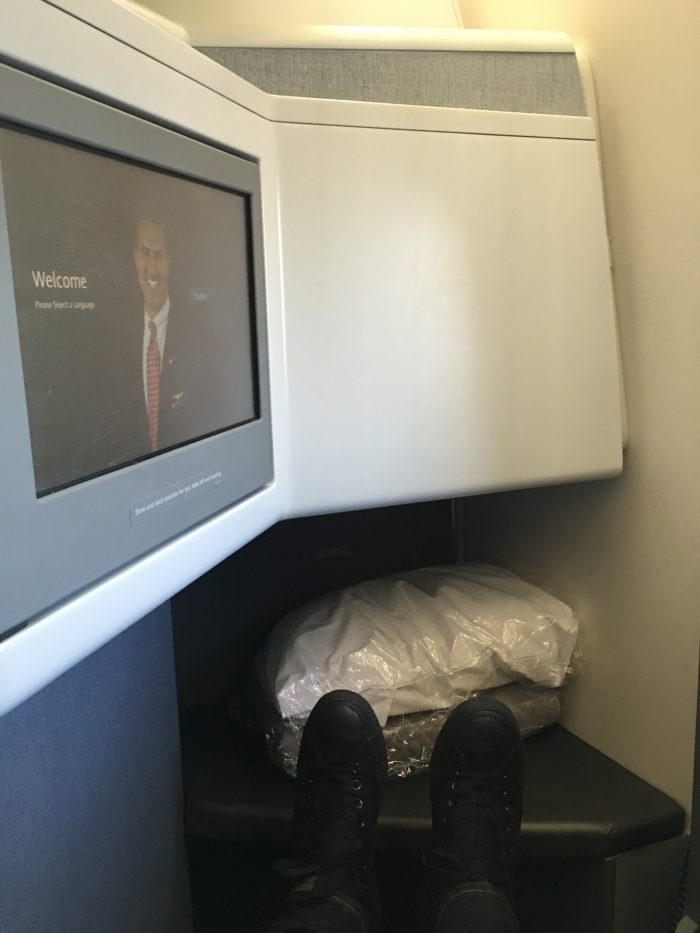 American’s business class seats on the Boeing 777-300ER are among the best in the world. I love the privacy of the reverse herringbone configuration, and the construction of the seat itself nearly creates a mini suite-like experience, missing only the door. American does offer first class on this flight, but business class is perfectly fine, especially given how the devaluation impacted business class award redemptions far less than first. 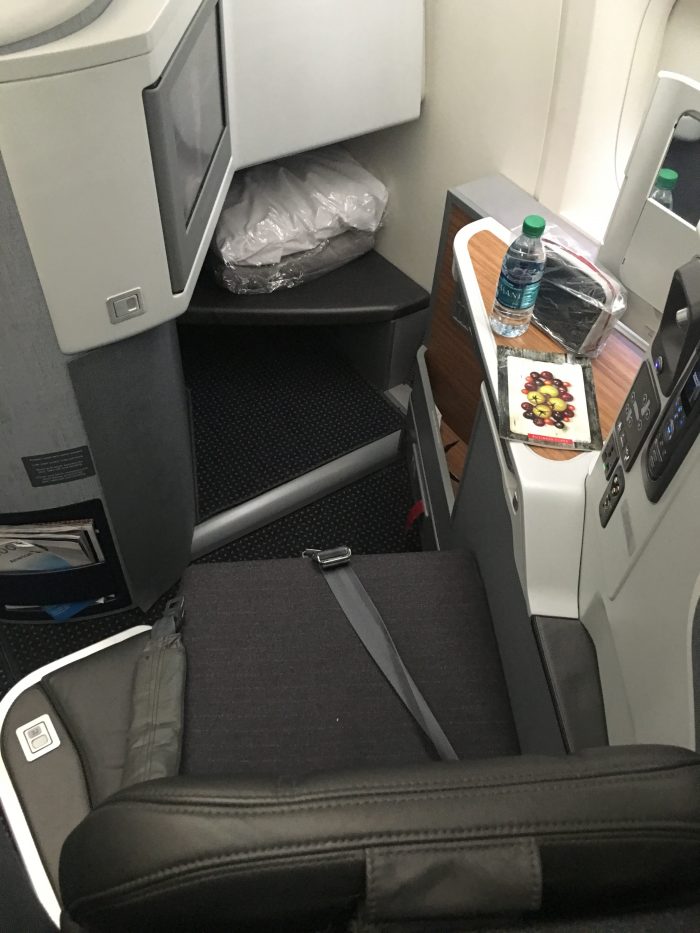 While we waited for everyone else to board, and while we drank our pre-departure champagne, I chatted with the couple behind me, who were celebrating 63 years of marriage. That’s a very long time. 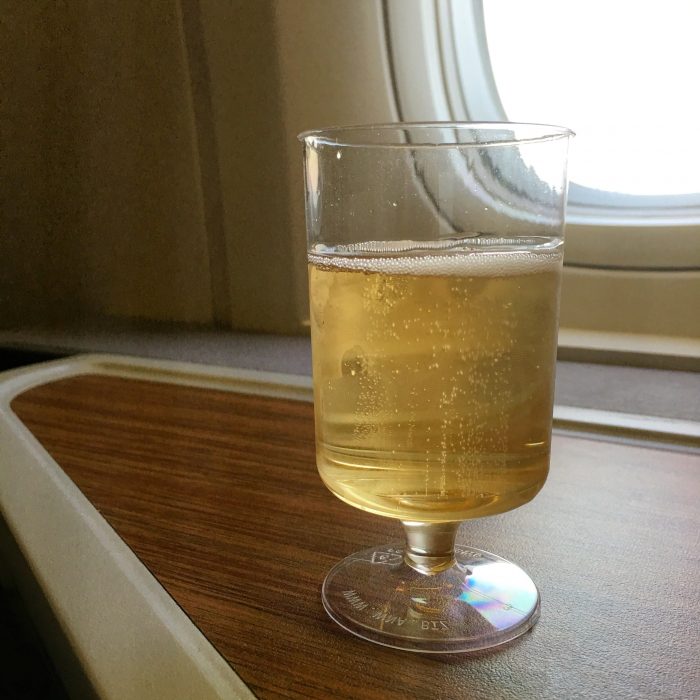 I also looked through the new American Airlines business class amenity kit, which is from Cole Haan. Other than the bag itself, it’s nothing particularly of note. 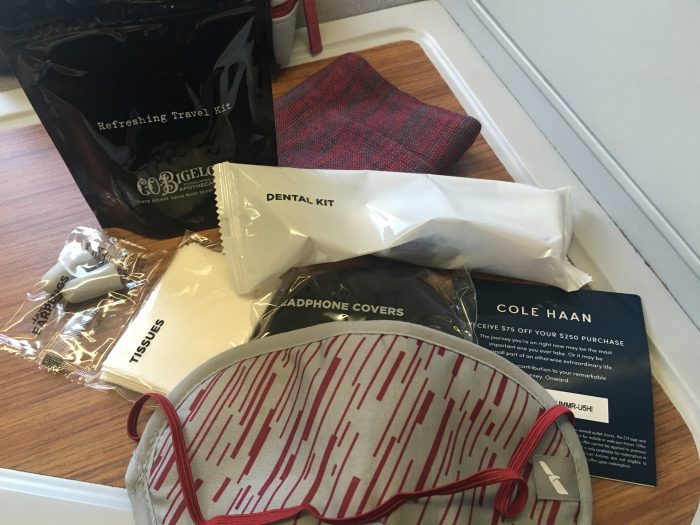 The flight took off roughly on time, which would become important later. Earlier that day (Friday), I’d heard that on Saturday they were going to be announcing the sale details for an extra day of tennis at Wimbledon on Sunday. I’ve always wanted to attend, but would the details work out? My flight was equipped with WiFi, so as long as I still had a connection at 1pm local time, I would be able to find out how to get a ticket.

I had preordered dinner online, which you can do up to 24 hours before your premium cabin flight on American. I’d seen a menu item that looked great since it was beef that also included truffled mac and cheese. I consider myself a bit of a mac and cheese aficionado, and I’d never seen it on a plane before. However, here was what I was presented with. That’s clearly beef, but also clearly not mac & cheese as the side. 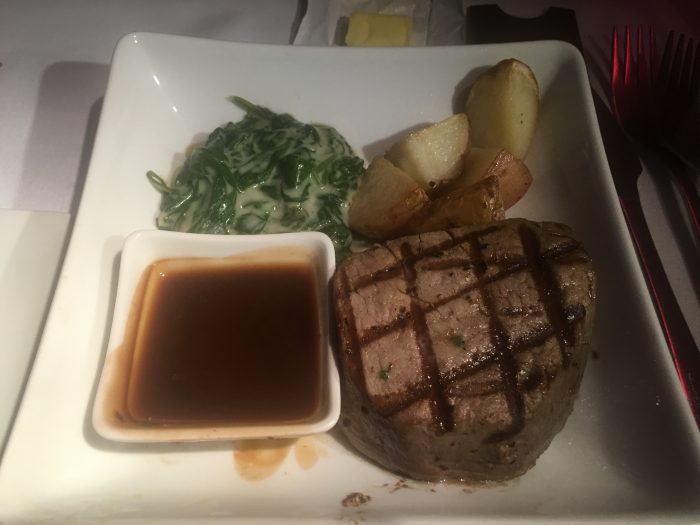 After looking at the menu, it was clear what had happened: It was July 1st. Although the business class menus had all been updated for July, including the online request form, the actual catering that was loaded on to the flight was still from the June menu. I’ve had this happen numerous times with inflight entertainment, but this was a first for the inflight meals.

I emailed American about my experience, just so they could be aware of it & hopefully keep future passengers from going through the same thing. To my credit, they not only responded quickly (seriously, I got a response 11 minutes later on a Sunday afternoon!), they also credited my AAdvantage account with 7,500 miles. Here was their full response:

We are very sorry to hear that you did not receive the meal you had selected via AA.com prior to your flight. We offer this option with the intention of giving our customers more control over their travel experience, and we are disappointed that this was not your experience.

As a gesture of goodwill, we’ve credited your AAdvantage® account with 7,500 bonus miles. This adjustment should be reflected in your account very soon.

Thank you for choosing American. We look forward to welcoming you aboard soon.

If you ever had a bad experience while traveling, it’s not a bad idea to send a nice, polite e-mail about it, especially if it’s information that is helpful to the company in the future. I’m not saying you should always complain about every little thing, but an occasional e-mail like this can get you a positive response like mine did.

Here are the business class menus for the flight from Los Angeles to London, even though it wasn’t what we were actually served: 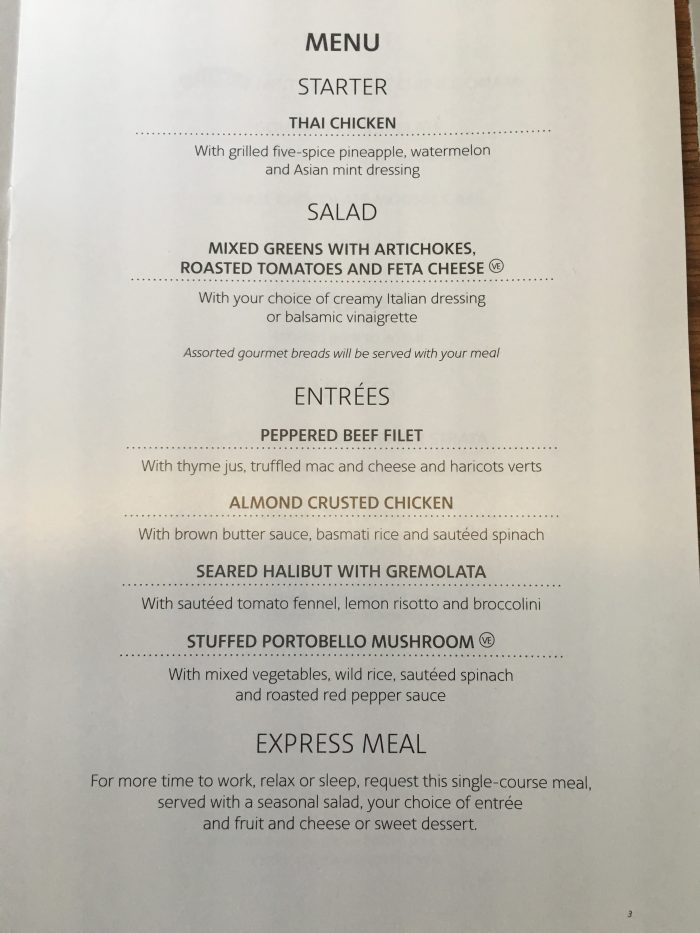 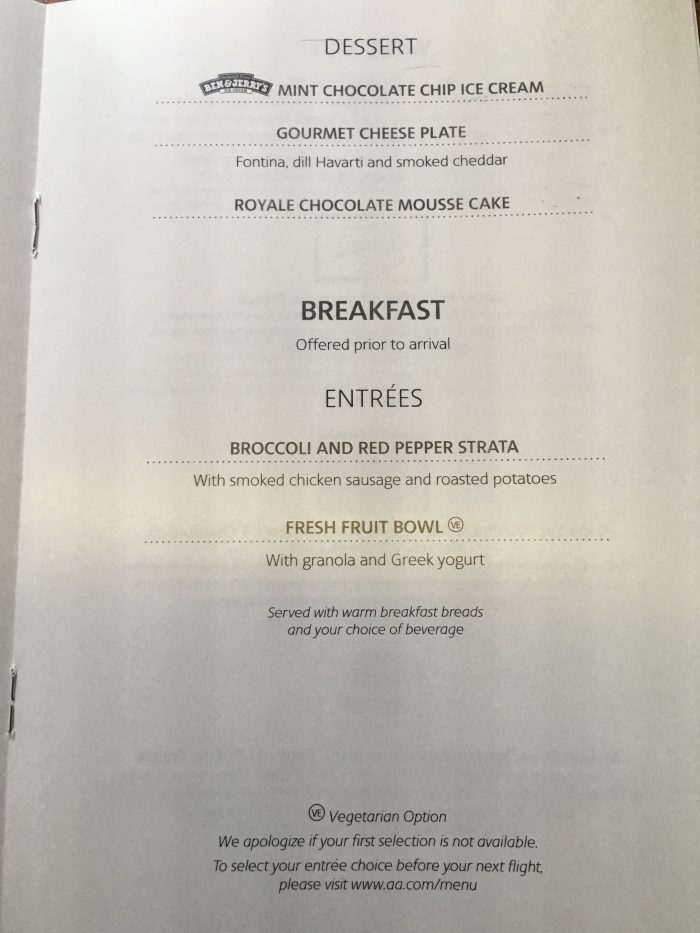 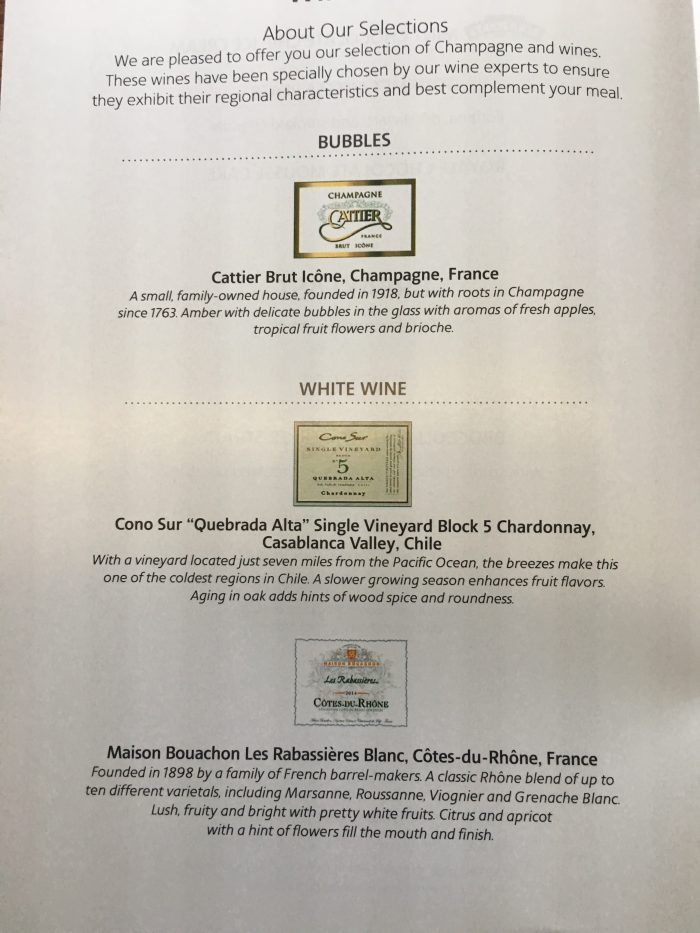 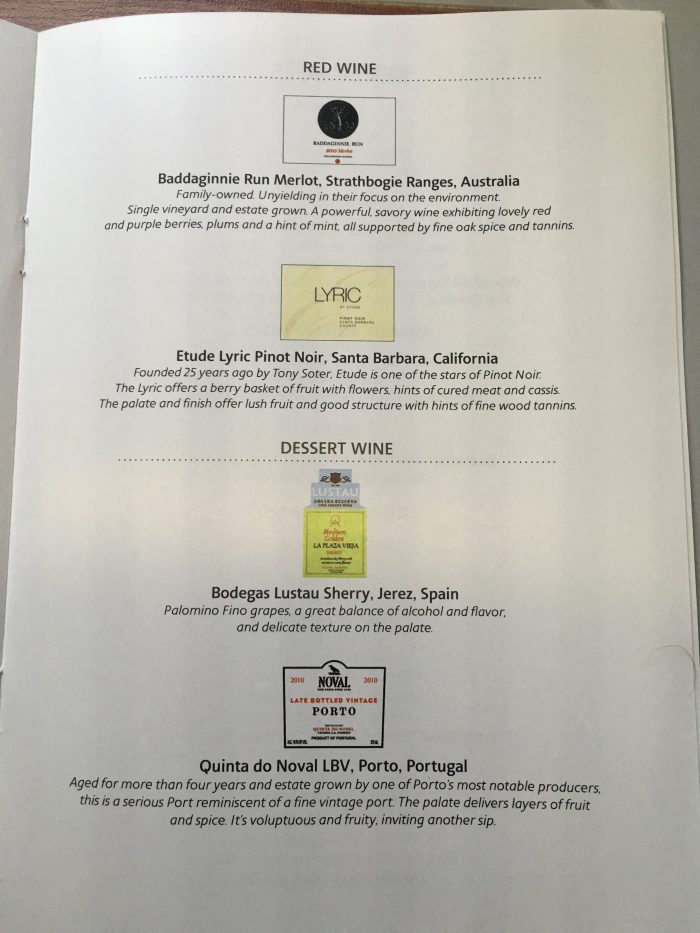 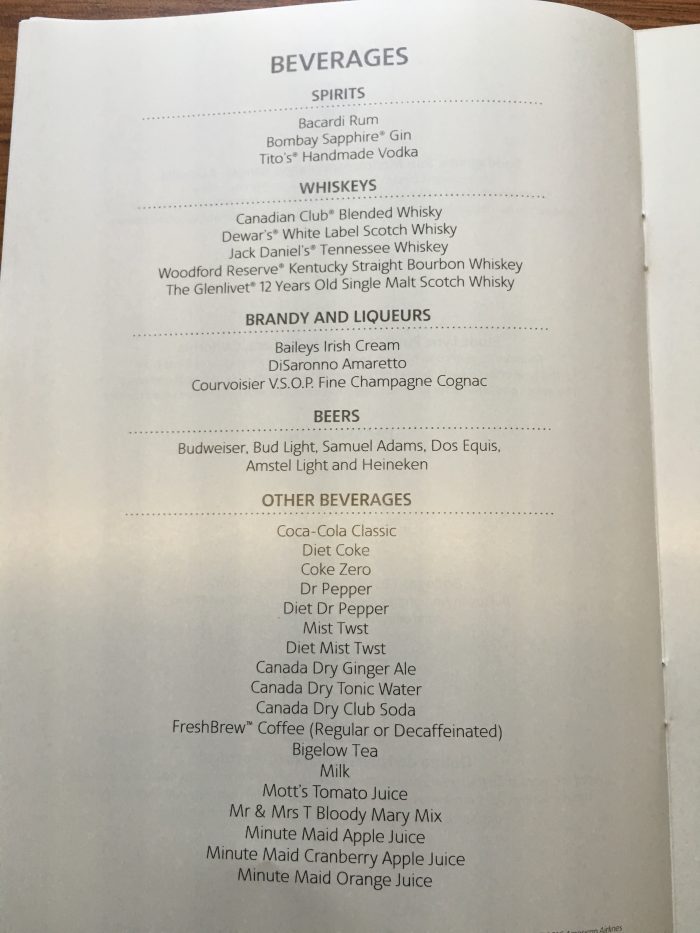 While the food didn’t match the menus, that’s not to say it was bad. The chicken with watermelon & pineapple was especially nice. It was a perfect light & refreshing summer appetizer. 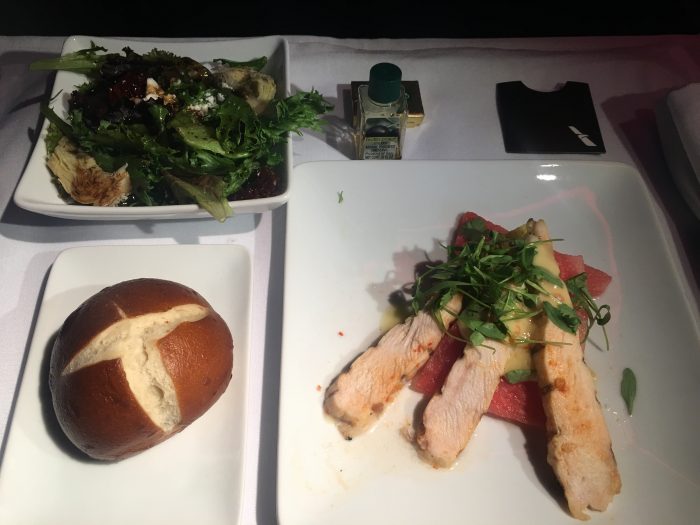 Before that, I had a glass of whisky soda & with some warm nuts. 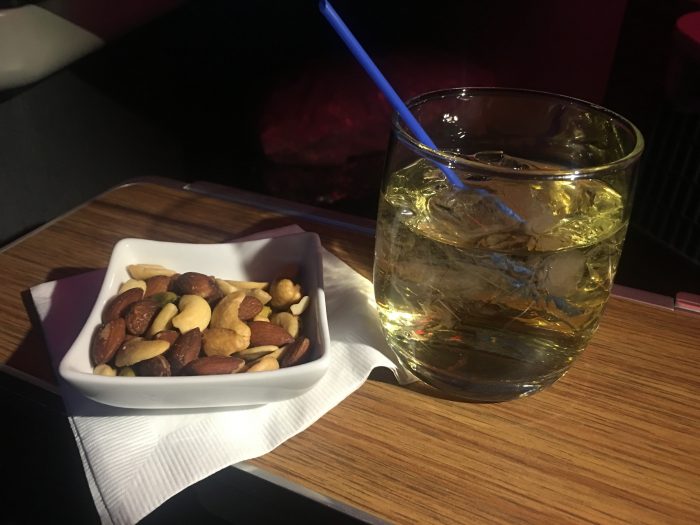 The service was stellar, in part because one of the flight attendants said he usually works first class. Even then, I’ve had surly American service in all cabins in the past, though it has been much improved as of late. The crew all had a great sense of humor, especially about the food situation. When it came time for dessert, I opted for the ice cream (with a requisite glass of port), which was supposed to be mint chocolate chip, but obviously was not. They told me to tell them what it was so they could fill everyone else in. For the record, I believe it was Ben & Jerry’s Vanilla Toffee Bar Crunch. 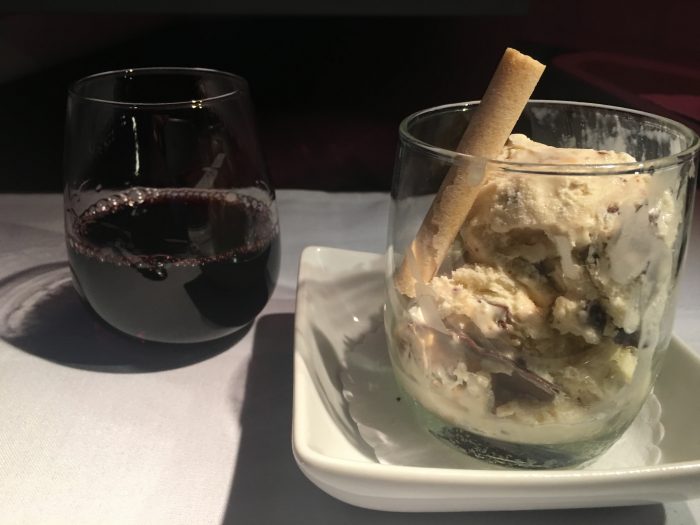 American’s inflight entertainment selection was fantastic as well. There were hundreds of movies and TV shows to pick from. The first movie I watched was The Big Short, which I highly recommend, particularly if you want to become angry about the housing crisis. Later on I watched Whiskey Tango Foxtrot, starring the excellent Tina Fey, which was less impressive, but not terrible. As usual, Bose noise-canceling headphones were available. 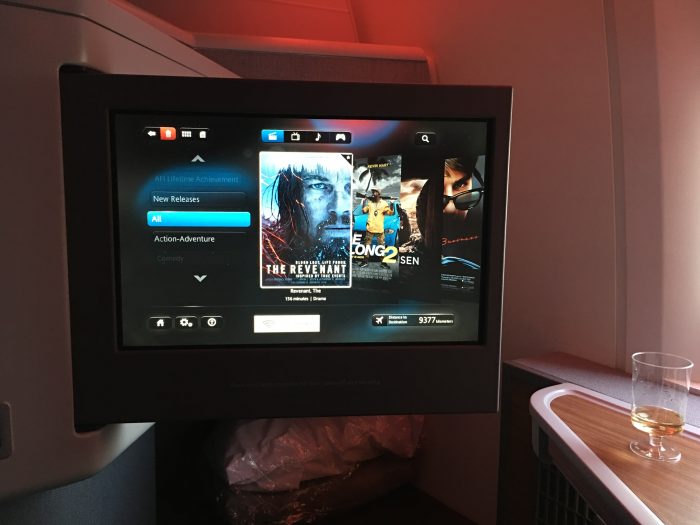 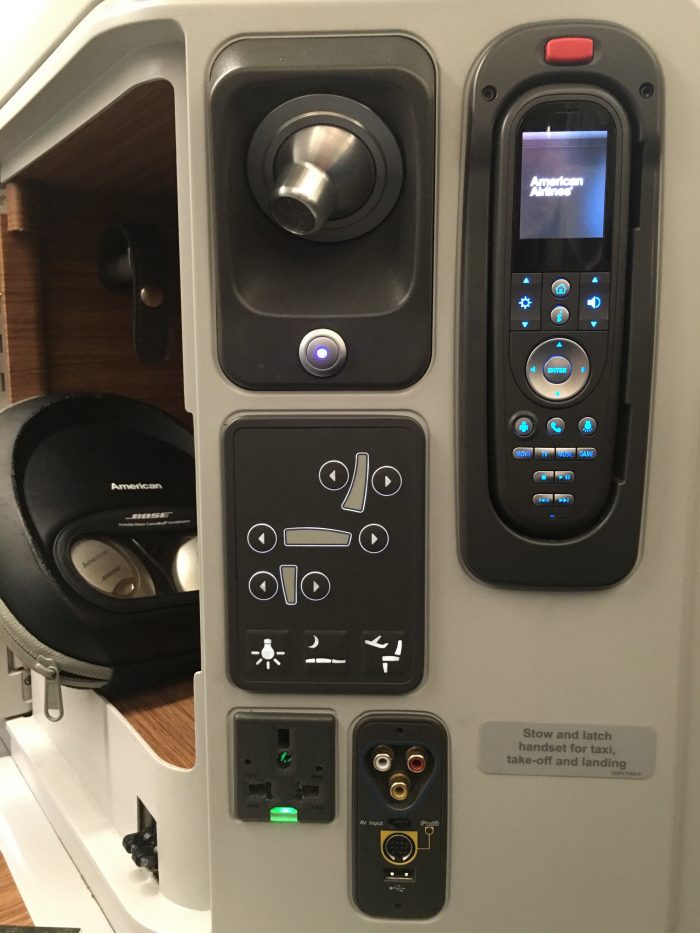 There were snacks available in the galley throughout the flight. 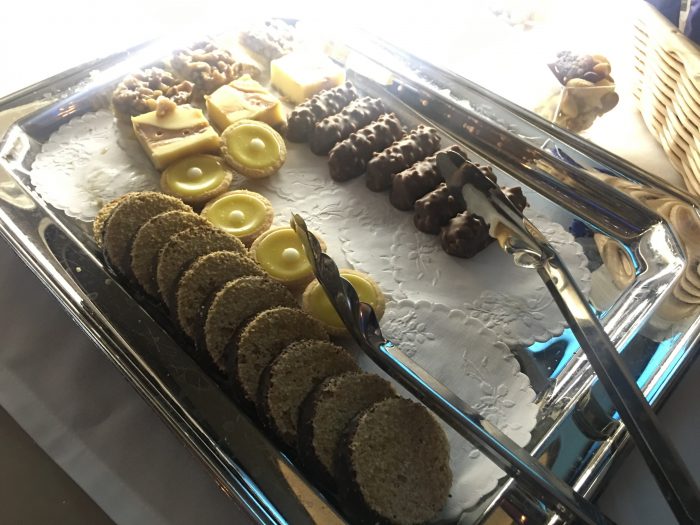 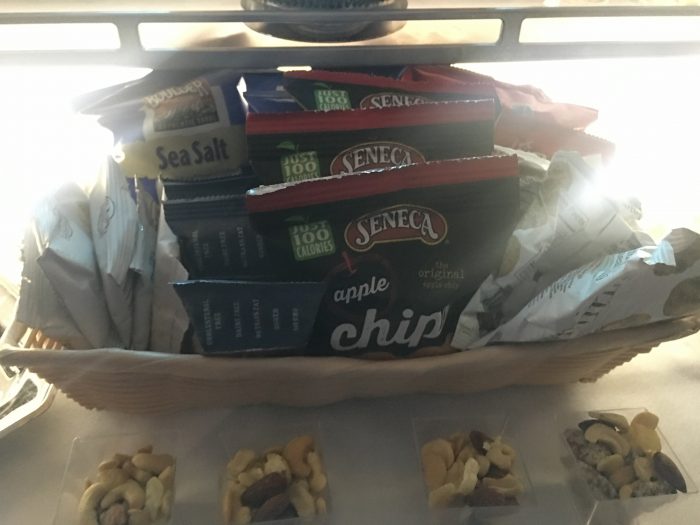 After my meal & watching the two movies, it was time to try and get some sleep. The seat reclines into a full lie-flat seat, and there was plenty of space for me to stretch out. I dozed on-and-off for 4-5 hours, which wasn’t bad, though there was a constantly slight turbulence much of the time. 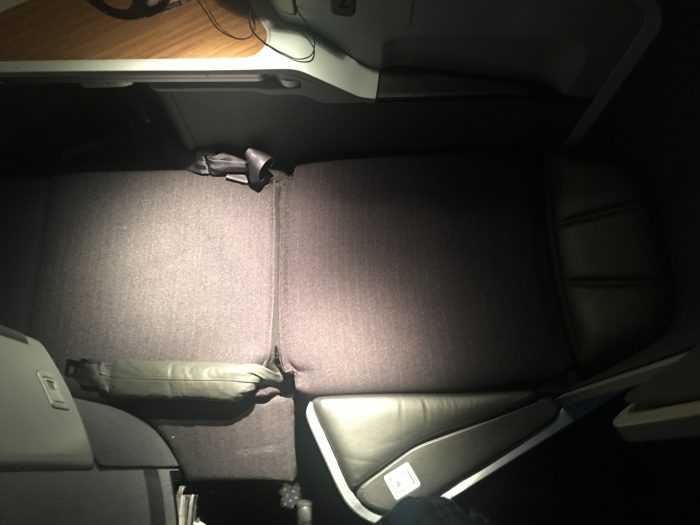 I woke up feeling somewhat refreshed, and ready for a full day ahead of me. Breakfast service was available as soon as anyone wanted it. I had the fruit & granola, which although basic, was a nice light way to begin the day. 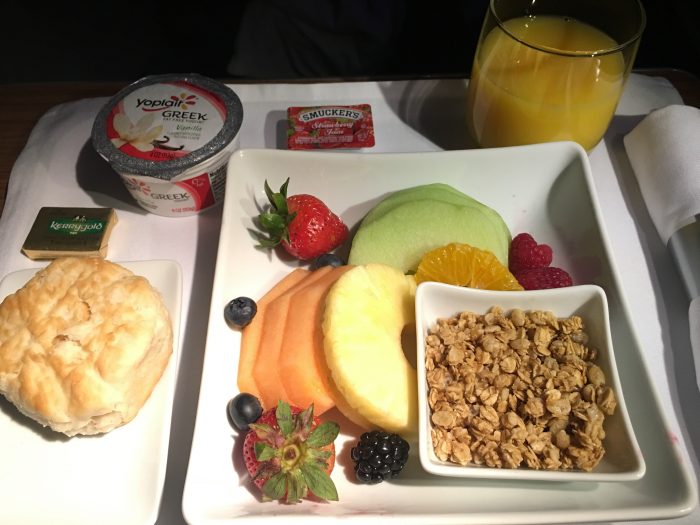 Around noon, I purchased a couple of hours of WiFi. 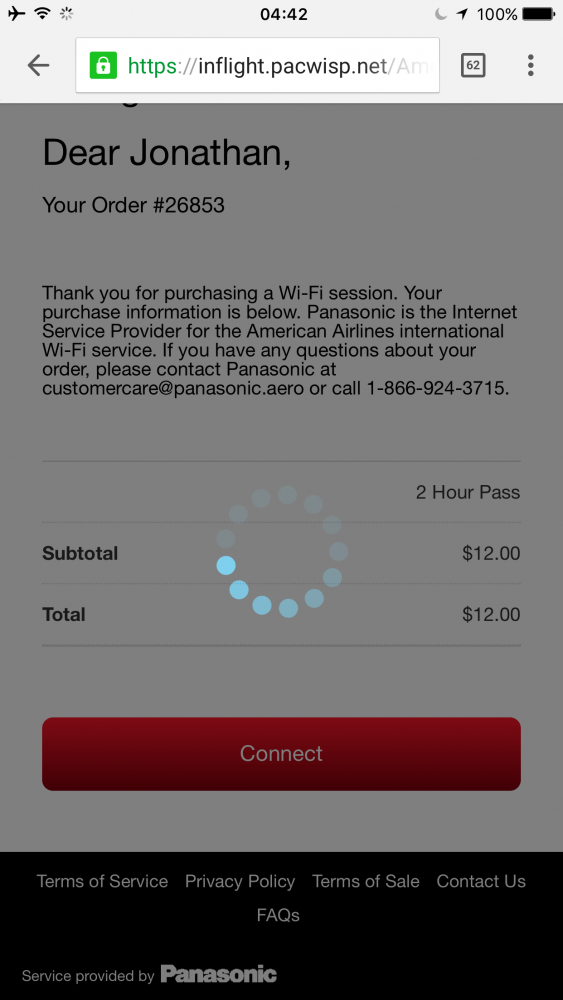 At $12, it wasn’t a terrible deal. I could have bought access for the whole flight for just $19, but I didn’t need it. All I needed to do was find out how to get tickets to Wimbledon. The WiFi wasn’t lightning fast, but it was decent enough. At 1pm, the details were posted. Tickets would be going on sale in two hours at 3pm. Meanwhile, we were beginning our descent into London, with these stunning views of the city from above. 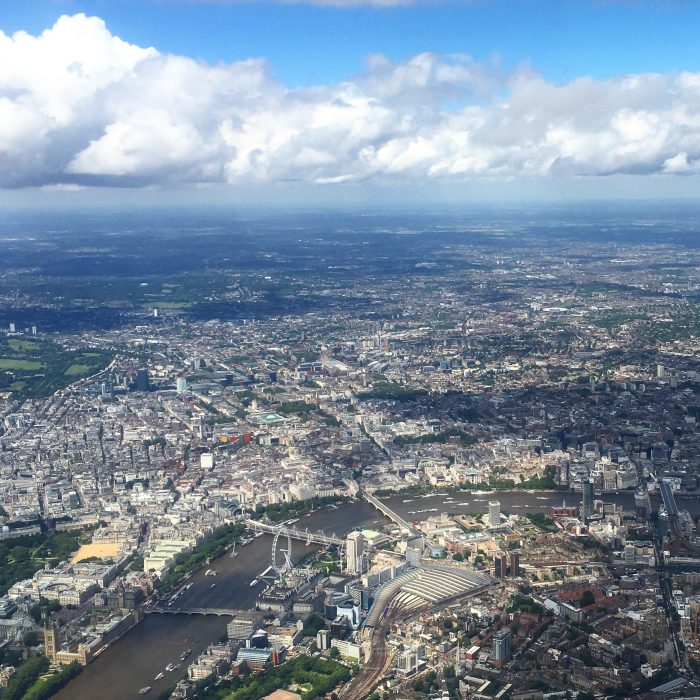 My flight landed a little after 2pm. While I would be one of the first people off the plane, clearing immigration & customs at London Heathrow can still be a crapshoot. Would I be able to pull this off & get to go to Wimbledon on People’s Sunday? Stay tuned for my next post to find out…