When I travel, I like to attend sporting events. Whether they are massive world-famous events or local competitions, watching live sports in person can be a uniquely local experience. Attending the Wimbledon tennis tournament in London, England has always been one of my dreams.

Attending Wimbledon isn’t easy, though. Tickets go on sale far in advance through a lottery. Unless you are lucky enough to be selected, the only way you are usually getting in is either being rich enough to buy tickets on the secondary market, or lining up very early in the morning for tickets on each day of tennis.

However, under exceptional circumstances, there is another way. Every now and then, bad weather forces the Wimbledon organizers to add an extra day of tennis to the schedule. Since the middle Sunday of the tournament is generally an off day, it becomes the added day, which is known as People’s Sunday since anyone can snag tickets.

As I mentioned in my review of my flight from Los Angeles to London, I learned that People’s Sunday was going to be added to the schedule only a few hours before I departed. Sunday would be my first full day in London. Could I snag a ticket to Wimbledon?

My flight was equipped with WiFi, so as long as I still had a connection at 1pm local time, I would be able to find out how to get a ticket. At 1pm, the details were posted. Tickets would be going on sale in two hours at 3pm. With my flight landing around 2:15pm, that would give me less than 45 minutes to clear immigration & customs, then get find my way online to buy a ticket.

As it turned out, I had no issues at immigration or customs. For a moment, I feared I might get pulled aside for a luggage inspection, but they stopped the person in front of me instead. It was 2:45pm, and I was out of the airport, standing at a bus stop. Thanks to T-Mobile’s excellent free international service, I had data. All I needed to do now was get a ticket into my cart & purchase it. There were three ticket options: Centre Court, Court No. 1, and Grounds Passes. I figured that many people would go for Centre Court since it features the star matches, and many people would go for Grounds Passes since they’re cheaper, so I opted to go for Court No. 1, since it would still have good tennis, give me full access to the rest of the grounds, and it had a large number of tickets available. 3pm came around, and I managed to buy a ticket. It cost 44 pounds, plus I had spent $12 on internet access to find out the details. I was going to Wimbledon 2016! 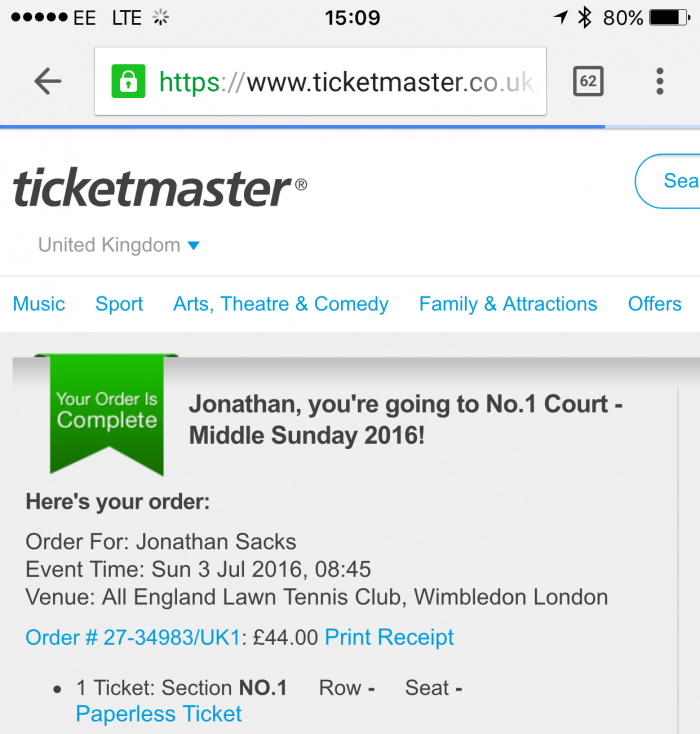 After spending an evening at some London craft beer bars, I headed to Wimbledon in the morning. I was staying in Shepherd’s Bush, so it was an easy ride on the Tube from there to Notting Hill, where I changed trains to go to Southfields.

From there, it’s easy to get to the All England Lawn Tennis & Croquet Club, the home of Wimbledon. It’s about a 15 minute walk, but there are volunteers and police officers guiding the way. I was even given a map of the area & the courts as soon as I got out of the Underground station. 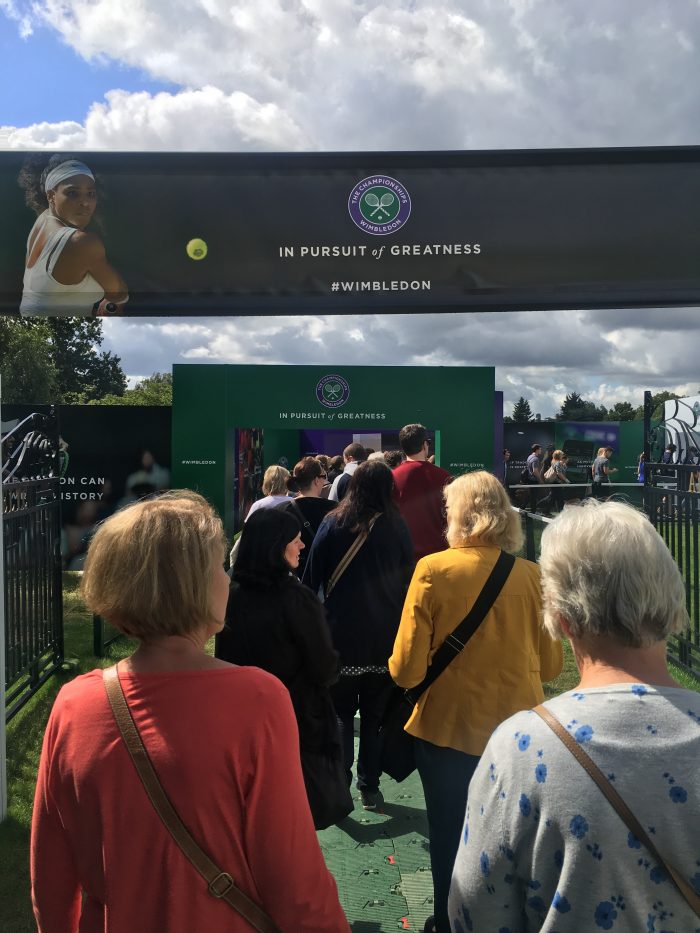 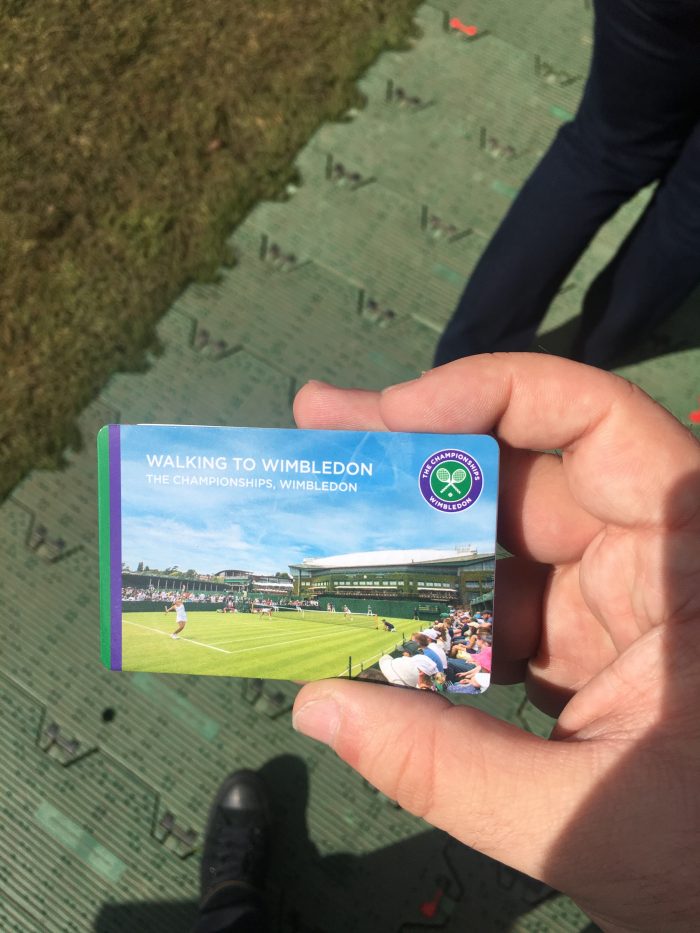 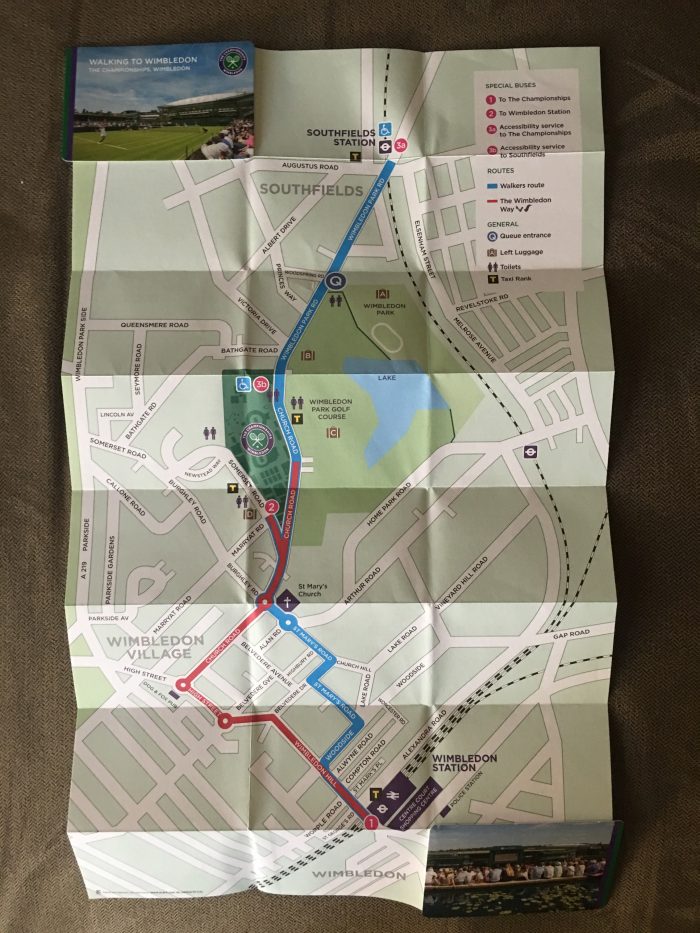 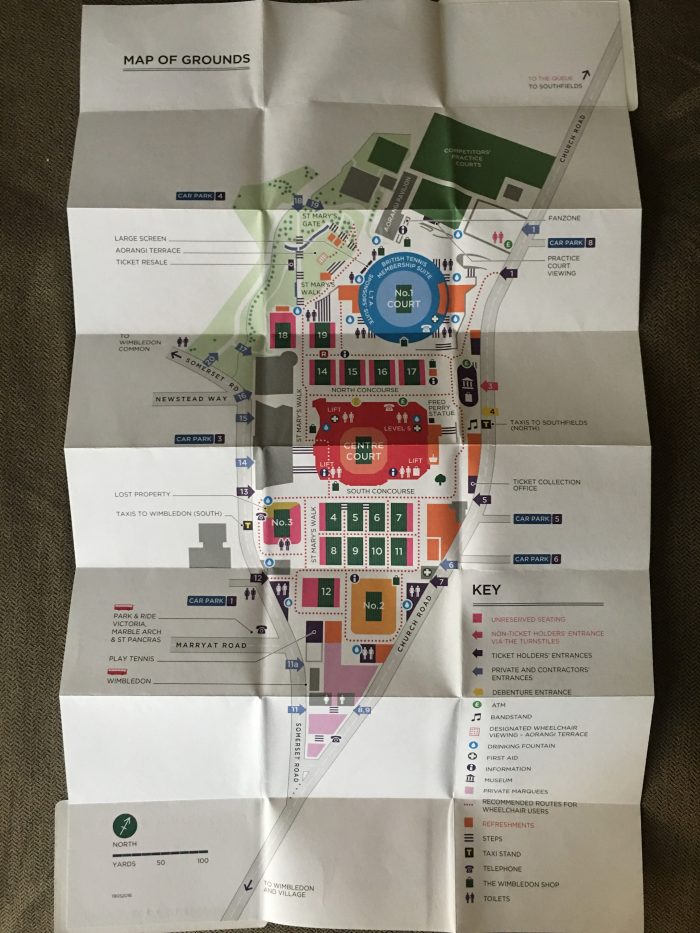 I arrived at the end of the queue around 10am. From there, it took about 30-45 minutes to actually make it on to the grounds, but the queue is well-managed (of course it is, this is England). The queue moves constantly, with the only slight stop being at the security stations where you pass through metal detectors & all bags are screened. I had plenty of time, since the first tennis matches of the day weren’t until 11:30am. 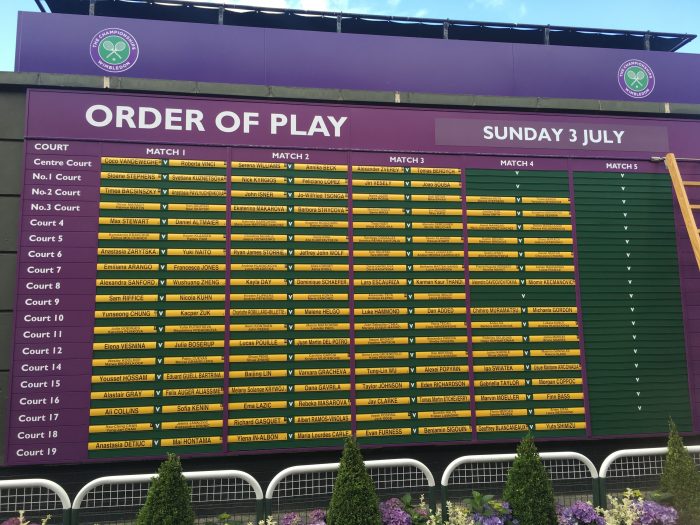 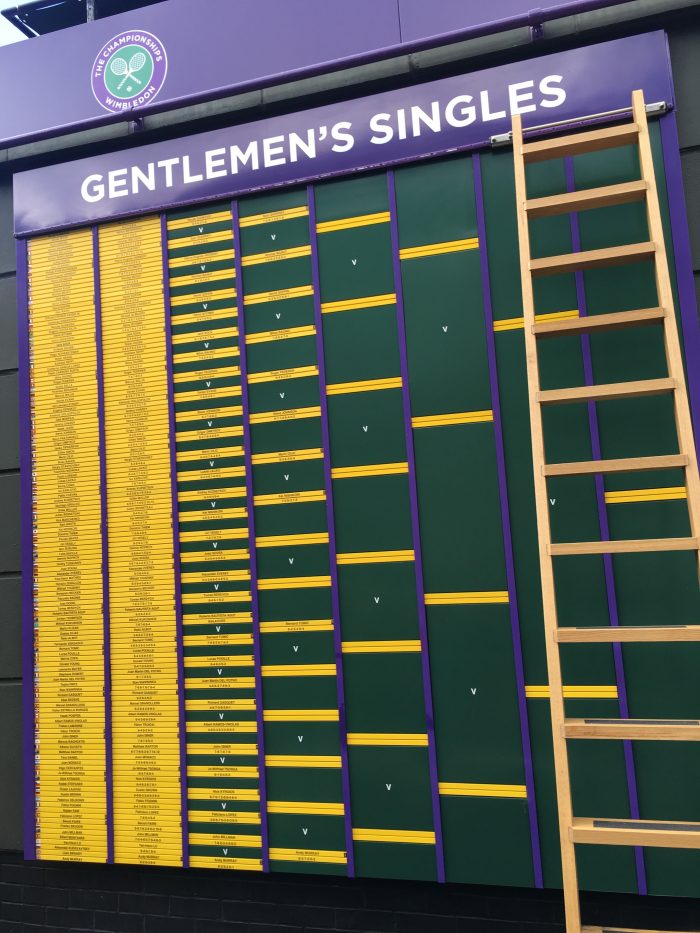 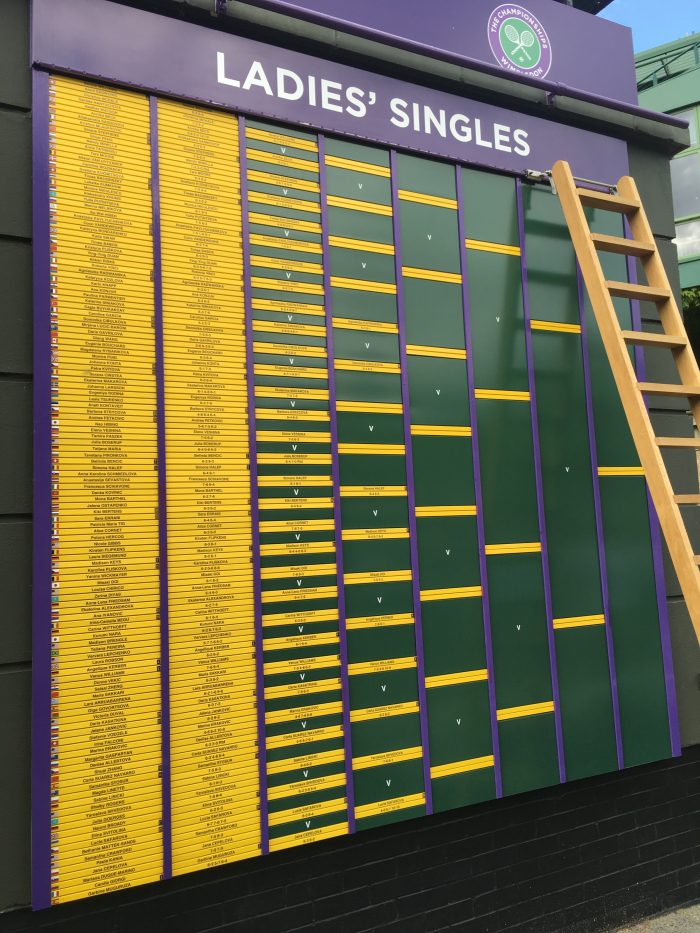 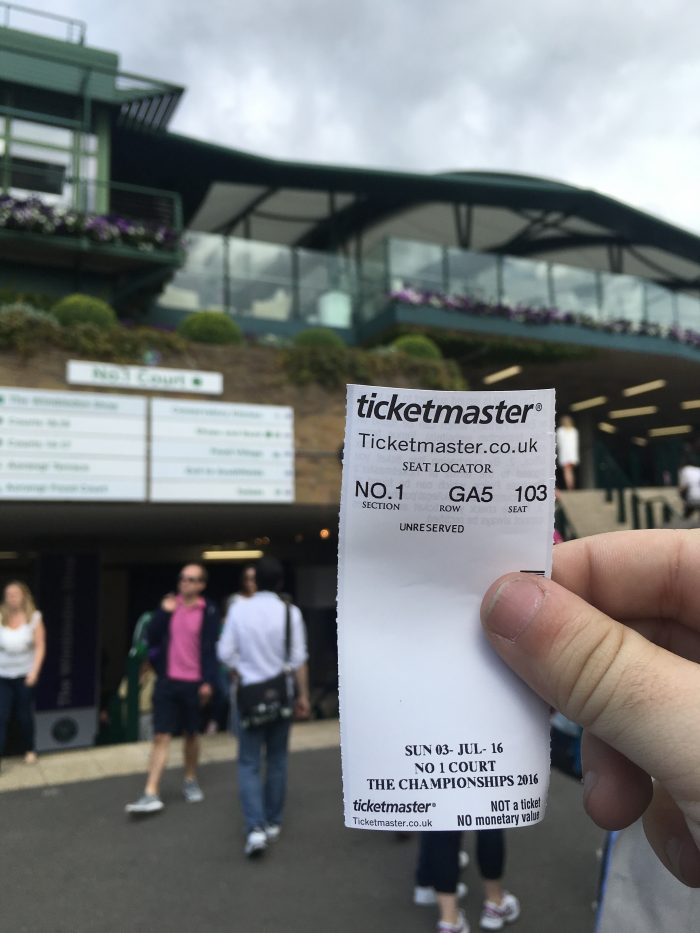 Court No. 1 was perhaps halfway full when I entered. I could have sat a few rows lower, but I found a spot with a wall behind it. I figured that would let me take photos as much as I wanted to without interfering with the view of anyone behind me, plus the seat location guaranteed I would be sitting in the shade all day. I was finally at Wimbledon, and on the special Middle Sunday, People’s Sunday, no less. 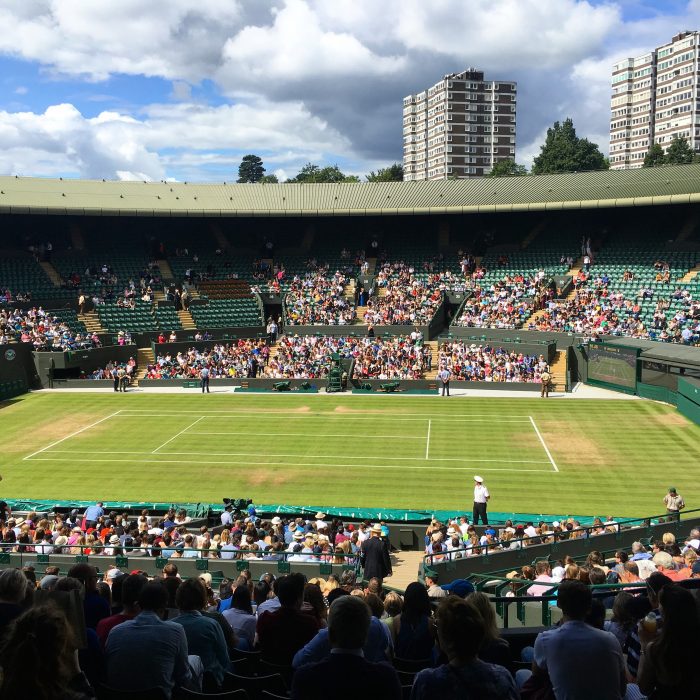 The first match of the day on Court No. 1 was between Sloane Stephens of the United States and Svetlana Kuznetsova of Russia. It was an amazing match. The first set went to a tiebreak, but Sloane took it. The second set was also a battle that was closer than the score looked, with Kuznetsova winning 6-2. Finally, it was time for the third and deciding set. Sloane Stephens was up 5-2 at one point, but ultimately ended up losing the battle 8-6. As the match ended, the crowd roared to its feet to acknowledge the fantastic fight we had just seen. This was my first experience watching tennis live, and what a great match to start things off.

Here are some photos I took during the Stephens & Kuznetsova match, along with video highlights courtesy of Wimbledon. There are some etiquette rules with taking photos during play, so most of my photos are from during warmups or in-between points. 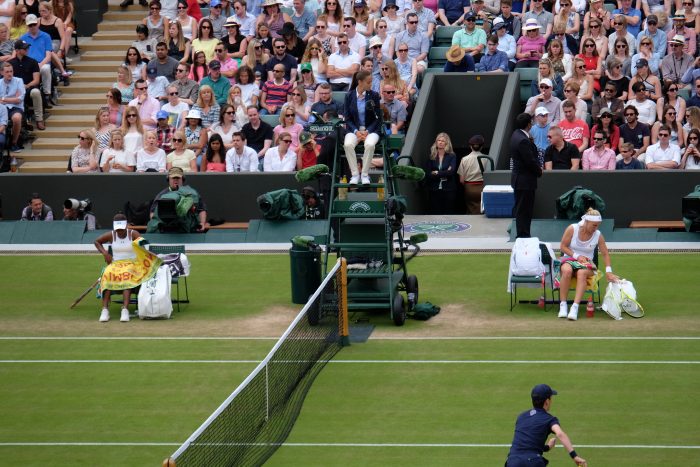 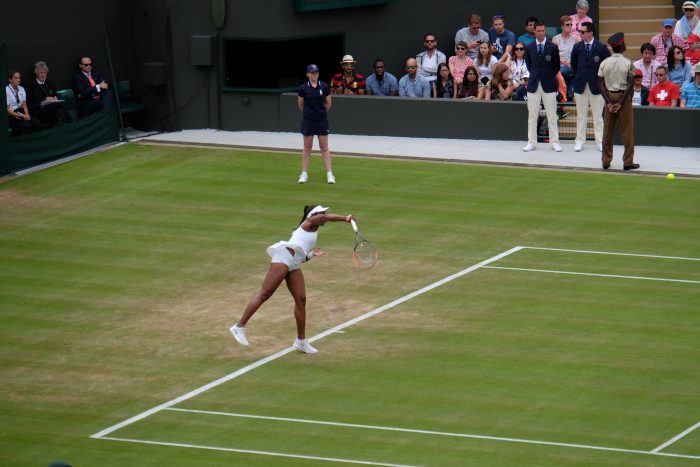 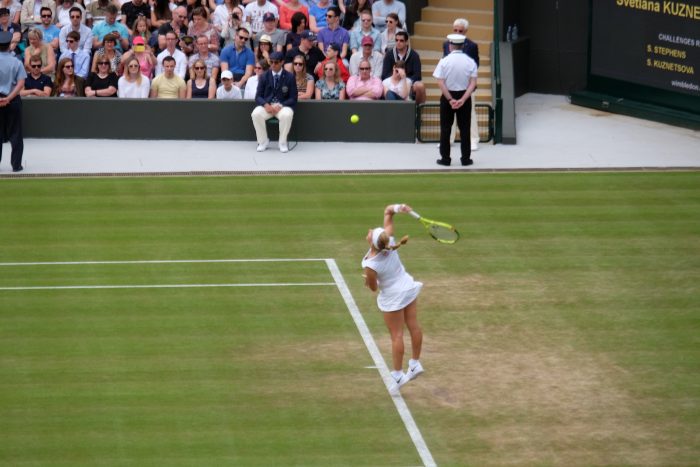 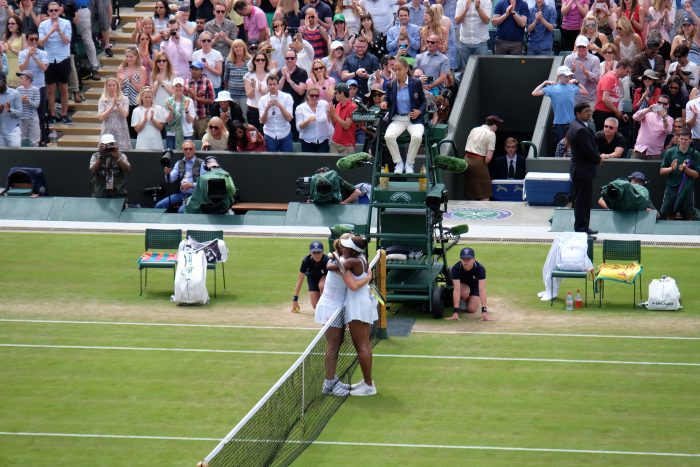 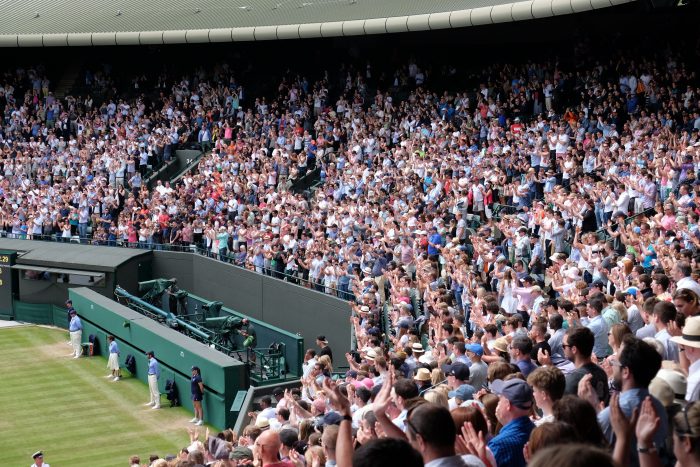 The second match of the day was a resumption of a match that hadn’t been completed the previous day, a matchup between Australia’s Nick Kyrgios and Spain’s Feliciano Lopez. The match picked up in the third set, with each player having won a set.

Nick Kyrgios has a reputation for being absolutely insane. On one hand, he can pull off moves on the tennis court that will leave you in awe, on the other, he also is subject to melting down at any moment. In between the two, his reactions are entertaining.

The crowds at Wimbledon know their tennis, even on People’s Sunday. They know when to be quiet, and when to yell out random things & cheer. That said, right as Kyrgios was about to take the first serve of the match, someone popped a champagne bottle, he paused, and everyone all laughed and cheered. That’s the sort of atmosphere you can expect on People’s Sunday.

The match then resumed, with Kyrgios winning two more sets to advance, but not before he first managed to smack himself in the face with the ball, then later he sprinted off the court when Lopez was about to smash down on him from about 10 feet away. Like I said, always entertaining.

Here are photos I took of the Kyrgios-Lopez match, along with more video highlights from Wimbledon: 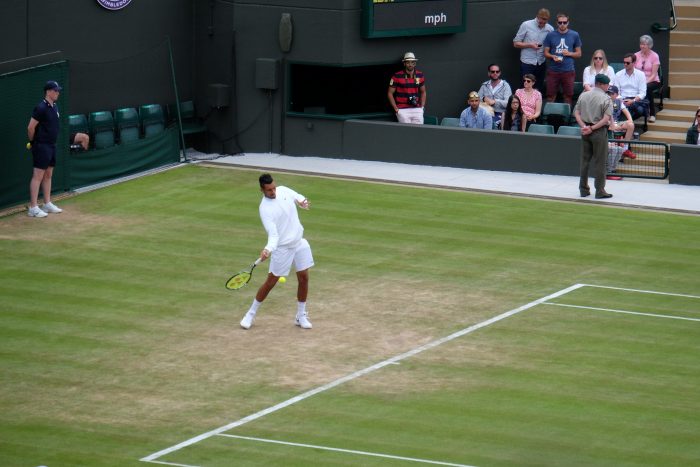 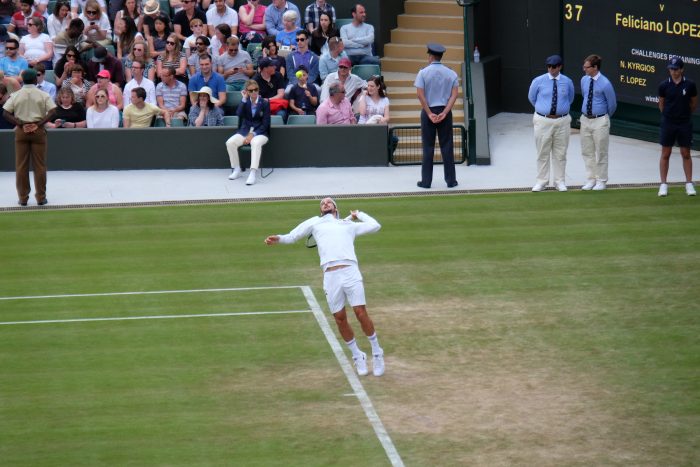 This was the final match scheduled on Court No. 1, which allowed me to spend the rest of the afternoon exploring the rest of the grounds. My first stop was Henman Hill, AKA Murray Mound, official name Aorangi Terrace, the large grassy area where Wimbledon fans gather to watch matches on a big screen jumbotron. 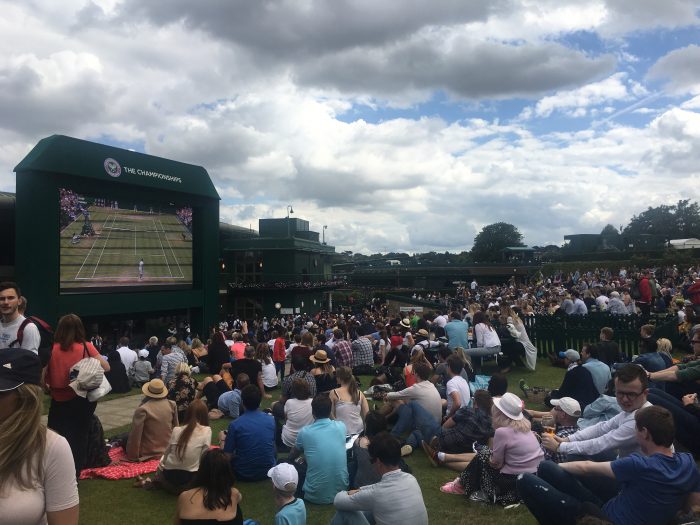 I arrived at Henman Hill just in time to see the end of John Isner being in yet another Wimbledon marathon match, as he lost to Jo-Wilfried Tsonga in an epic 19-17 5th set. If you can’t get into the Centre Court at Wimbledon, watching on the big screen with thousands of other tennis fans is your next best choice. If you do want to get into Centre Court, but missed out on tickets when they originally went on sale, Wimbledon has ticket resales. People who are leaving for the day can return their tickets, which are then sold to other fans for charity. Although this was not available on People’s Sunday, it’s still a cool idea that both benefits charities & lets fans fill unused seats.

While I sat on Henman Hill, I had my favorite British snack, Jaffa Cakes, and a giant beer. Wimbledon lets you bring in food & drinks. Go here for the full Wimbledon food & drink rules, but essentially you can bring in the equivalent of 1 litre of beer. The previous night, I had visited the Brewdog bar in Shepherd’s Bush, which has crowlers (can growlers) available for any of their draft beers. The crowlers were just under the amount of beer I could bring to Wimbledon, so it was a perfect match. 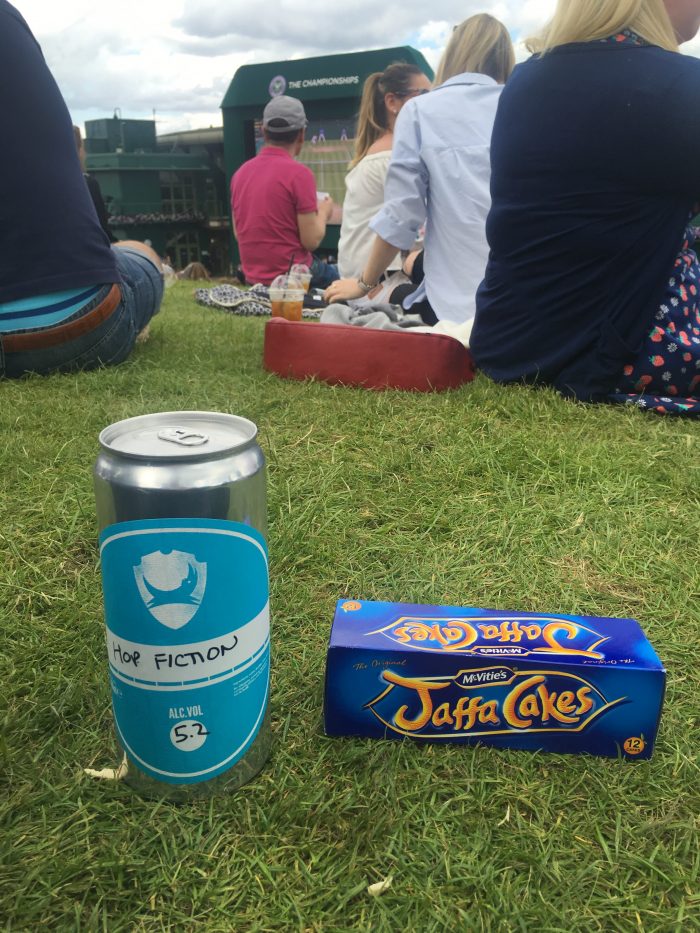 After my break, I watched more tennis. My first stop was Court No. 18, from which I could look out over several other courts around the grounds as well. 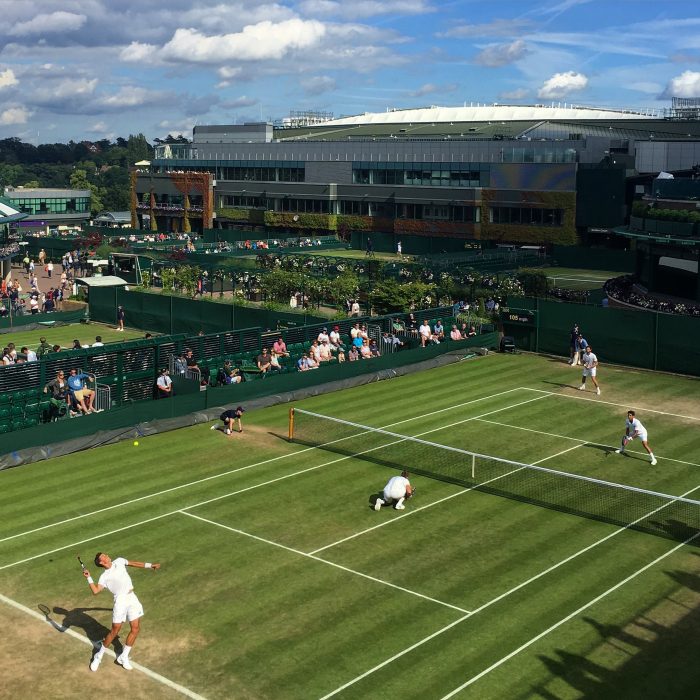 The match on this court was a men’s doubles match featuring Jack Sock, who won a mixed doubles gold medal and men’s doubles bronze medal at the 2016 Rio Olympics for the United States, and Vasek Pospisil vs. Quentin Halys and Tristan Lamasine. Sock & Pospisil won the match. Thanks to being above the action, I was able to get some interesting photos of the match. 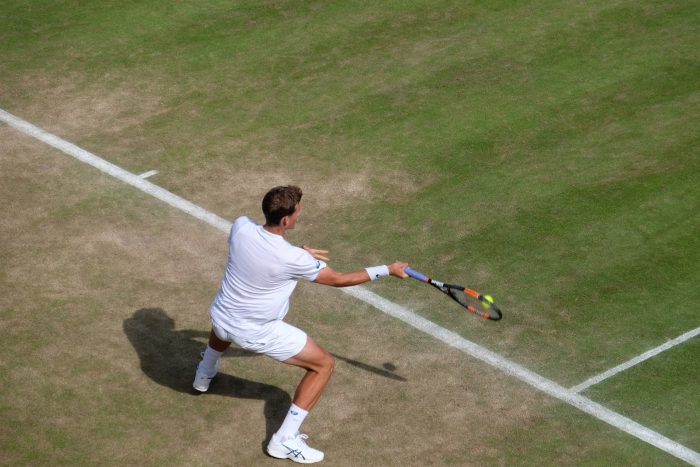 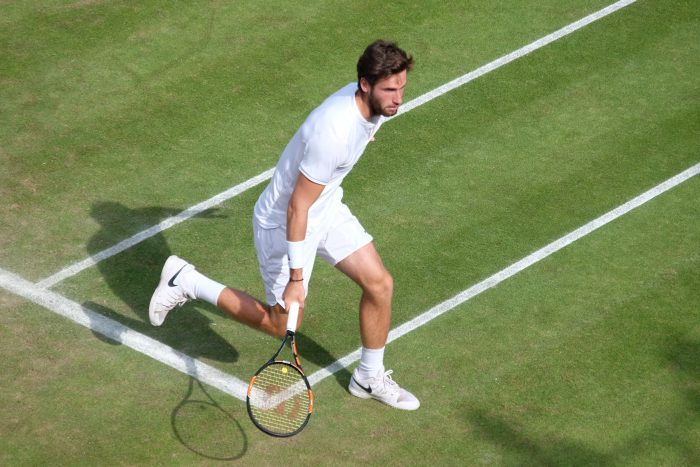 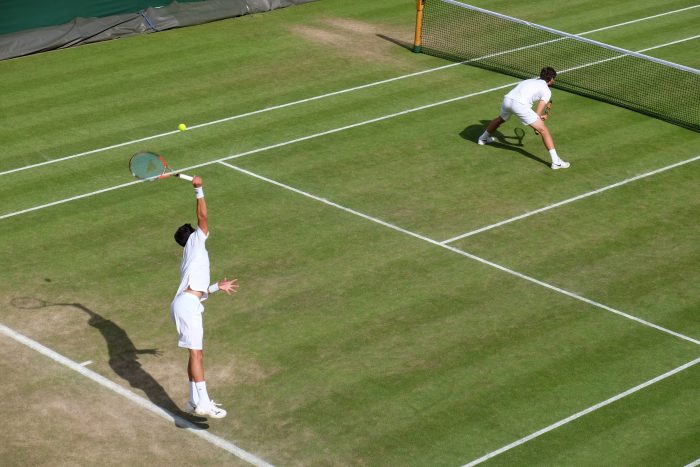 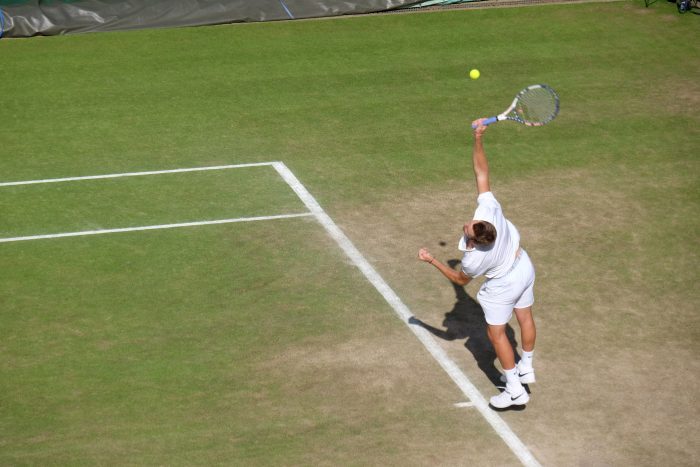 Once the match was done, I went to the mass of courts in the center of the grounds to see what I could find. I continued my curse on Sloane Stephens, watching her and Madison Keys lose a doubles match. Then I caught a few other random matches before most of the action ended for the day. 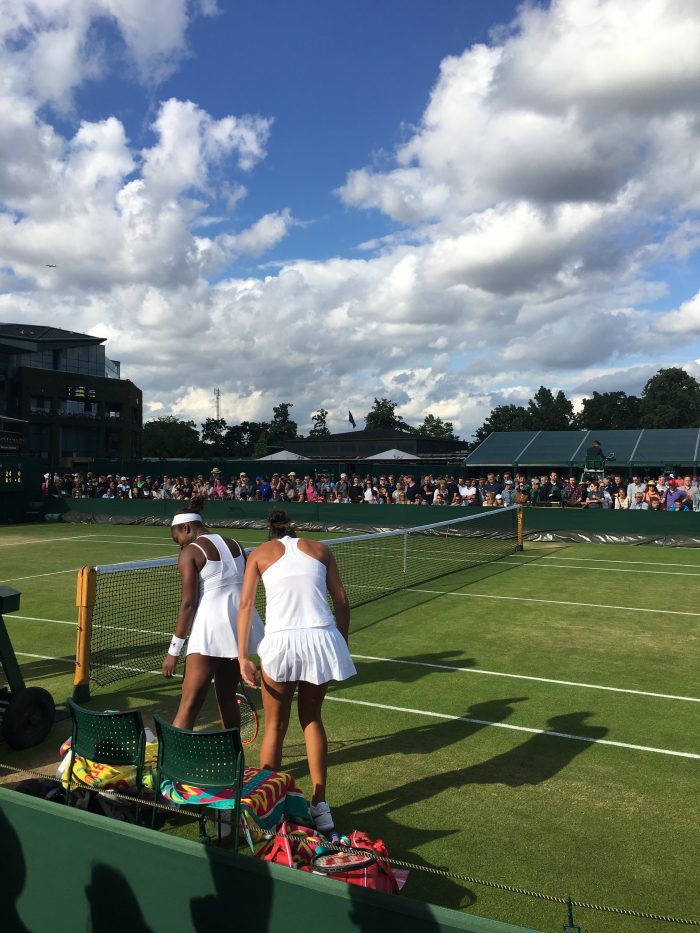 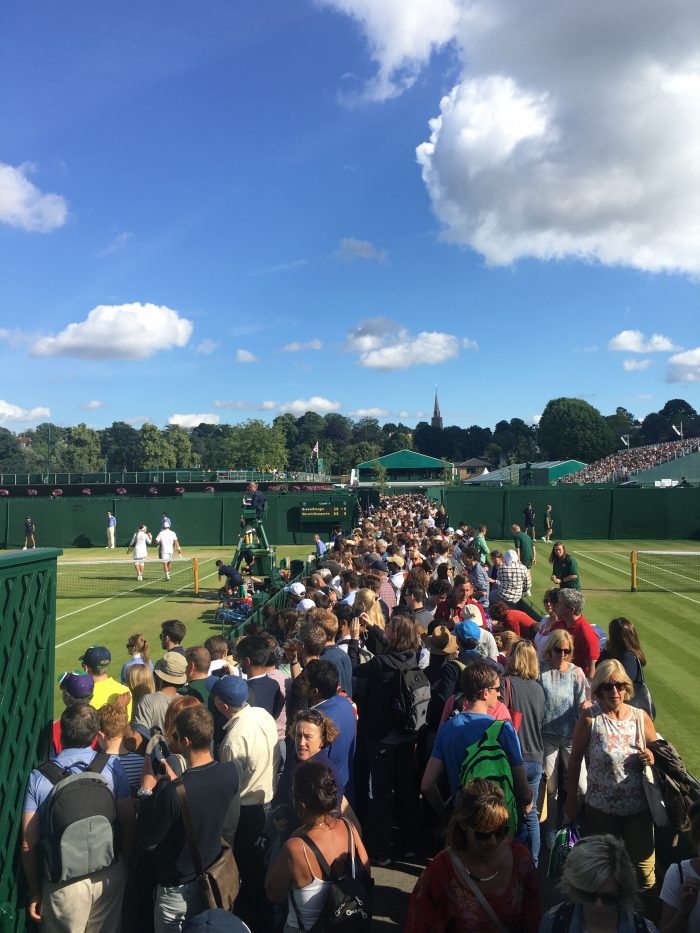 My day at Wimbledon was one I’ll never forget. It was my first time watching tennis in person, and while it’s good on TV, being at the event is an entirely different experience. Television doesn’t quite represent the true speed and movement of the sport, so being at the matches gives you a much better sense of the action. I’d love to go back to Wimbledon someday, but other tennis tournaments are now on my list as well.