Following my trip to Portugal, I began to make my way home from Europe on a United Airlines award ticket, but I would be flying in business class on Air Canada from Frankfurt to Calgary on a Boeing 777-200LR. 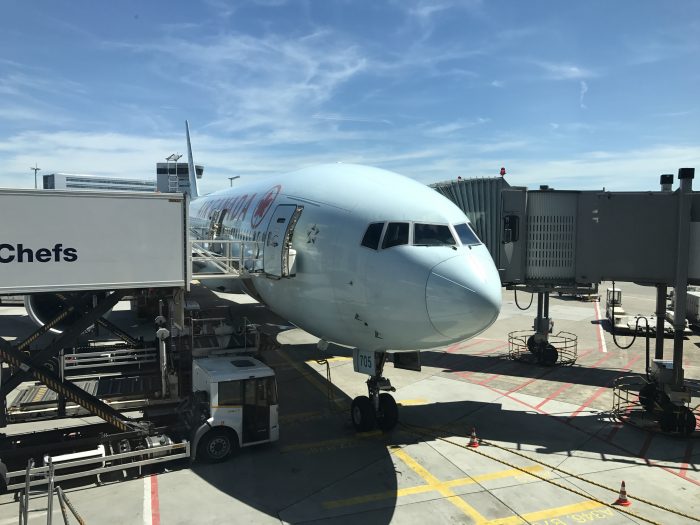 The plane (or at least the interior) was brand new. So much so that it actually had a bit of a new plane smell to it. The seats in business class were arranged in a 1-2-1 reverse herringbone configuration, resulting in plenty of space at each seat. The back section of business class was almost completely empty. Even if it had been full, the seats are arranged in such a way that you really don’t see anyone else. 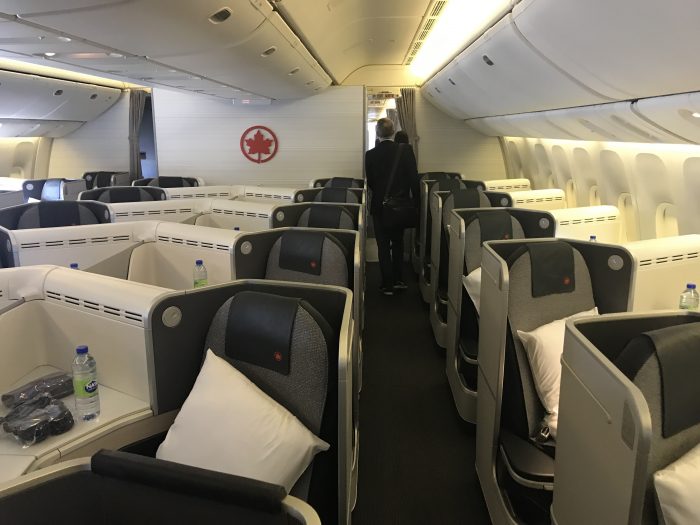 The business class seat on the Air Canada Boeing 777-200LR is a little narrow at the shoulders, but pretty wide at the feet. Otherwise, it’s comfortable, aside from one thing. The massive airbag on the seatbelt is in an uncomfortable spot. I’m all for safety, but it seems like a poor idea to have something that people are more likely to remove in flight, and thus expose themselves to more danger if there is turbulence. 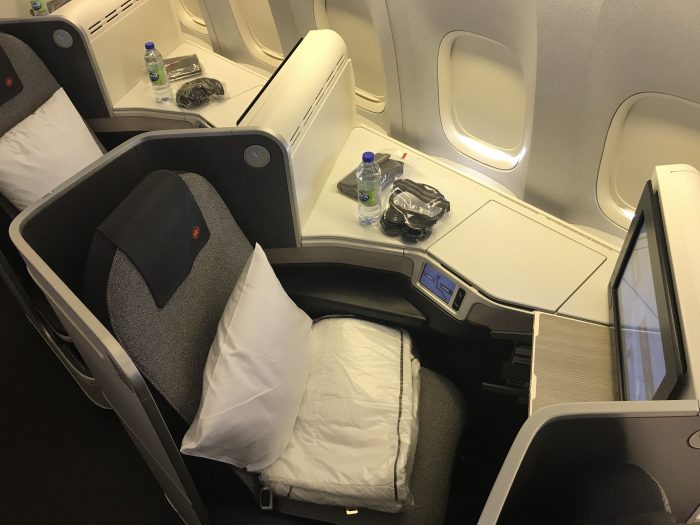 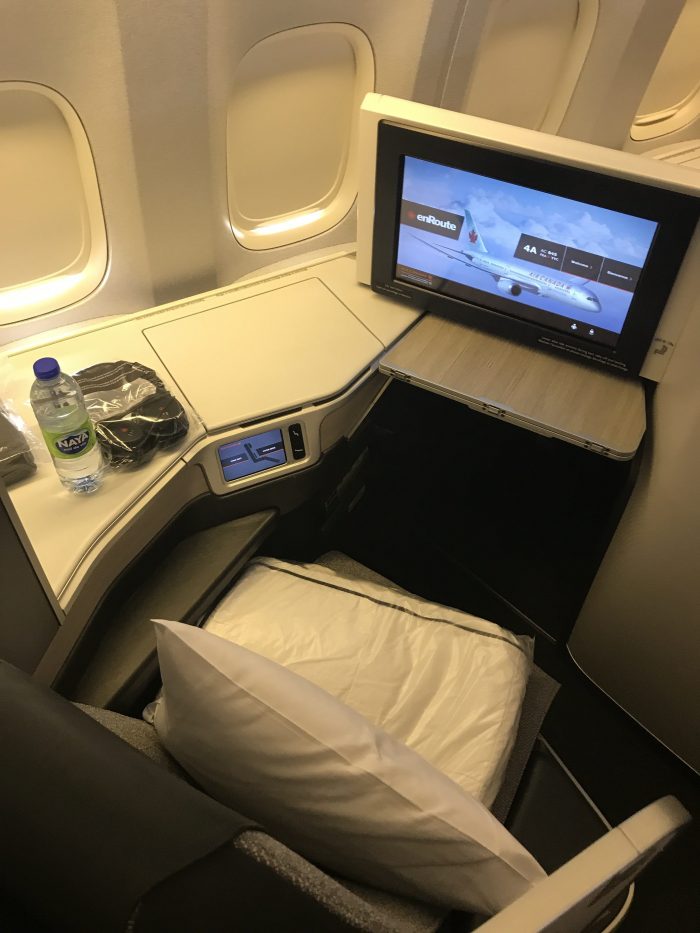 The seat had tons of storage, which is always a plus. There was a bottle of water waiting at the seat, which is another easy small touch that not every airline seems to understand. There were two sets of headphones at the seat. One nicer set of over-the-ear headphones and a pair of earbuds. This would make more sense to me a little bit later. 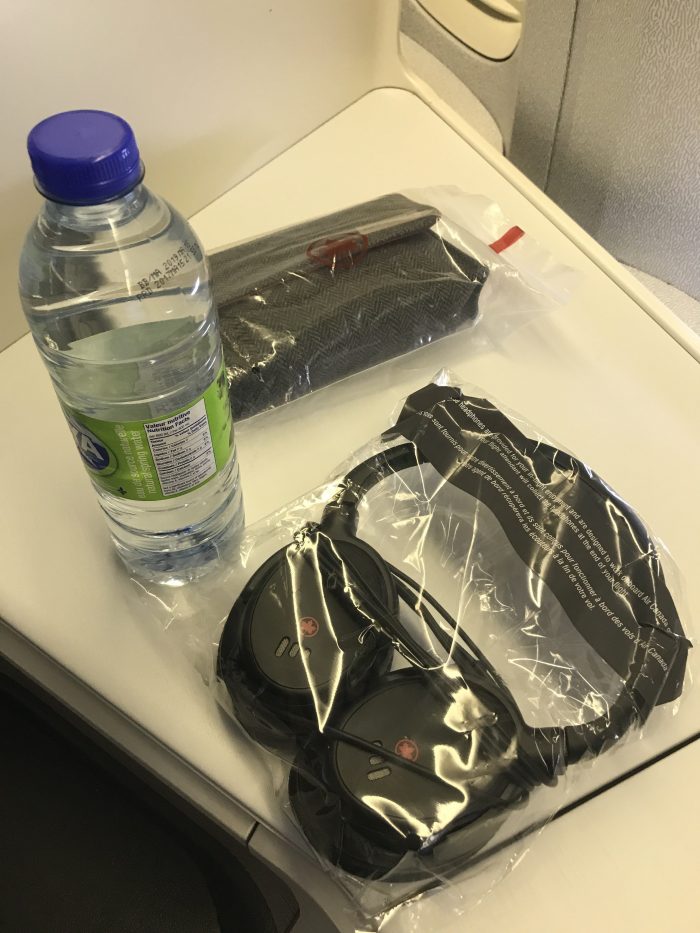 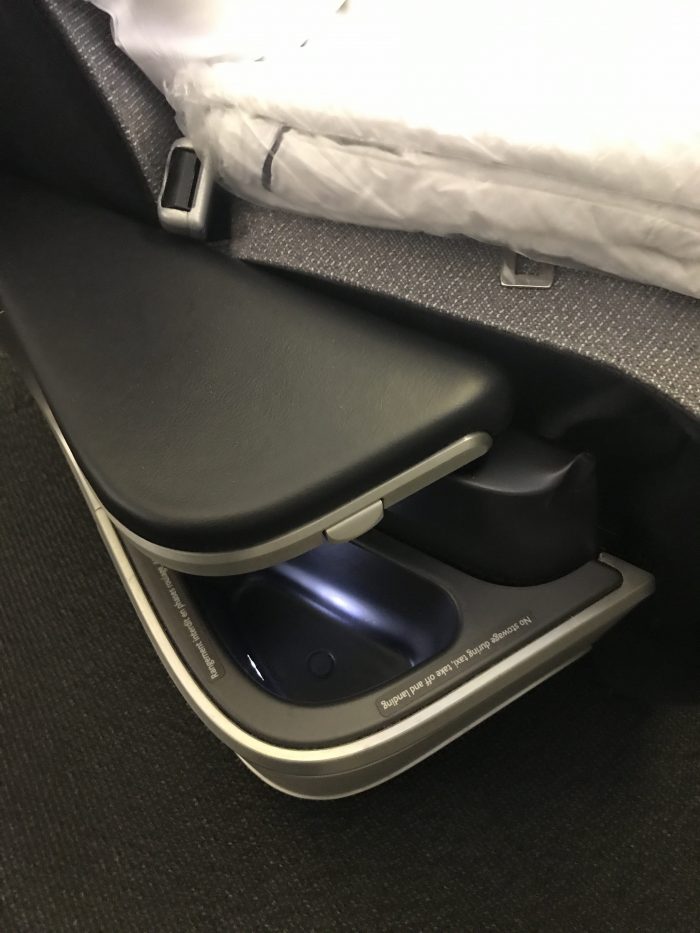 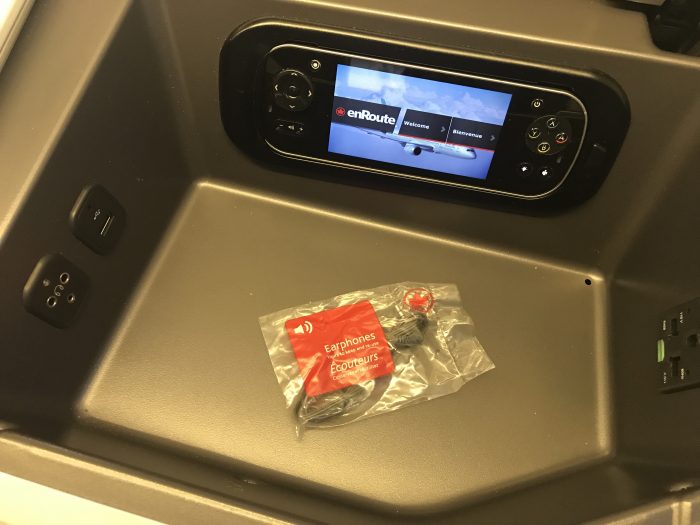 The amenity kit was pretty basic, though it did have a mint. I realize that’s a tiny thing, but really, they should be standard in all amenity kits.

Not long after I boarded, I was offered my choice of sparkling wine and orange juice. As always, I did the pro move of getting both, which meant I then had two mimosas. 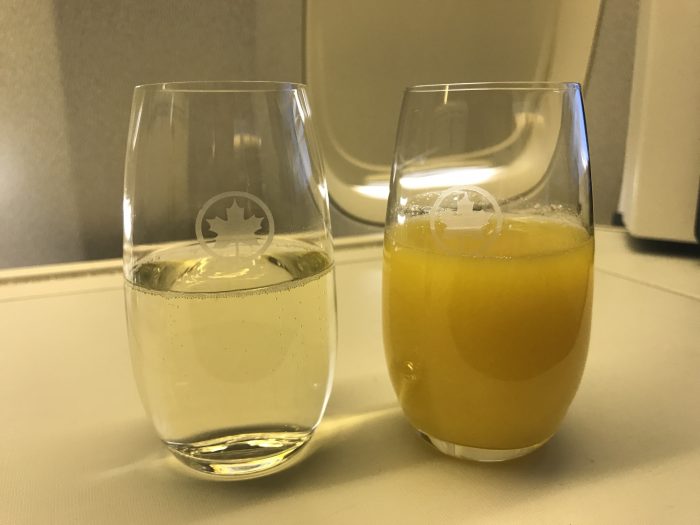 Mimosas in hand, I started watching some inflight entertainment. The Air Canada movie selection was pretty small. There were only a handful of new releases, and a handful more Oscar nominees. The selection was mostly foreign or documentaries. That said, I was still able to find a few good movies to watch.

Then, something unexpected happened. I was asked to remove the over-the-ear noise cancelling headphones because apparently they are only for in-flight. Earbuds were allowed, however, which is why there were both sets. This is an Air Canada-specific policy that I had never encountered elsewhere. Or should I say was Air Canada recently changed the policy, and now you can wear headphones at any time. It was an odd policy to begin with, and while I’m happy to comply with policies on board a plane, it was frustrating how it was applied arbitrarily. The woman who was sitting in front of me was allowed to wear the headphones the entire time.

To top it off, the earbuds didn’t work, so I sat there with no entertainment other than my two mimosas while we waited to depart. Ok, so that’s a minor problem in the whole scheme of things, but it’s still annoying.

The flight time from Frankfurt to Calgary was 8 hours, 47 minutes. Our route took us across Iceland & central Greenland. We were delayed for 10 minutes due to a passenger who didn’t show up, but then they did. I guess they decided to let them on late, since their luggage was already on the plane anyway, and it would be more of a hassle to find it.

Once we were in the air, service started quickly. I was given a hot towel & offered warm nuts. I actually liked that they were offered and not just put down in front of me. I find them too filling right before a meal, and plus I’d already had some food in the lounge. This meant I didn’t end up wasting food, which I hate doing.

Here are the business class menus for my Air Canada flight from Frankfurt to Calgary. 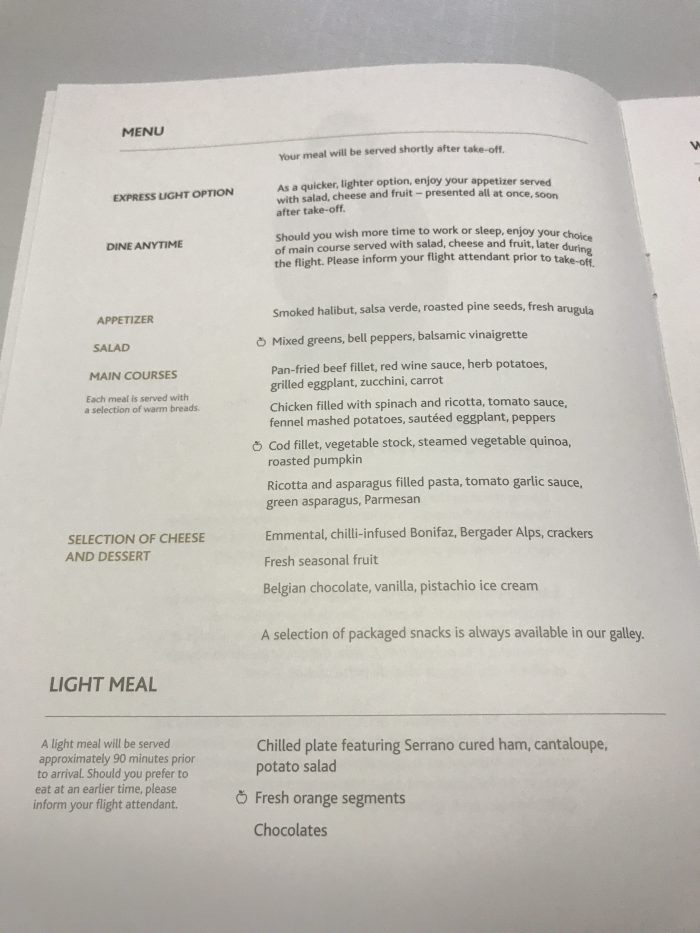 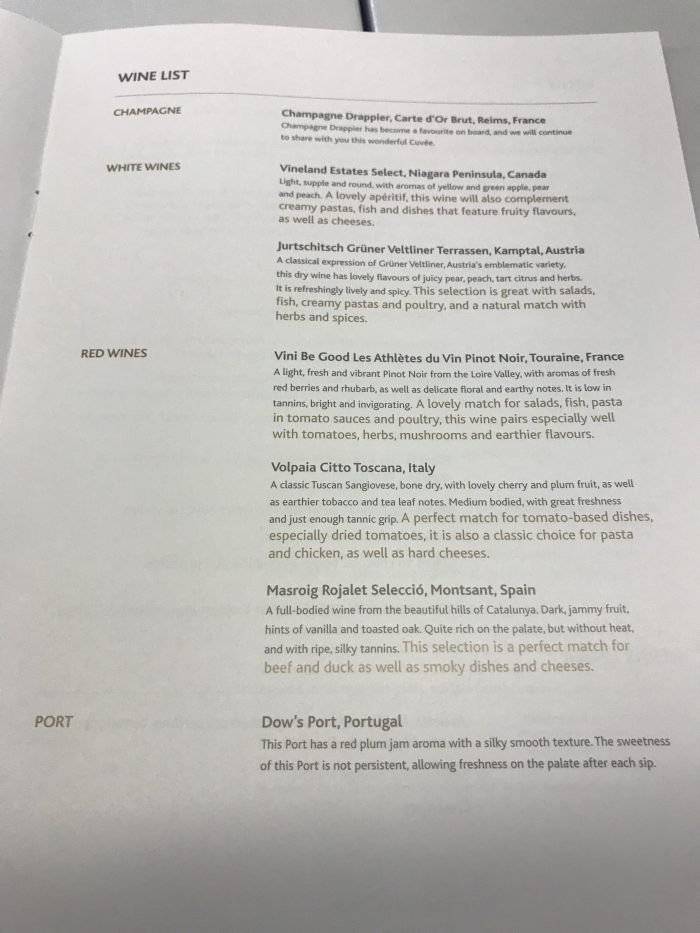 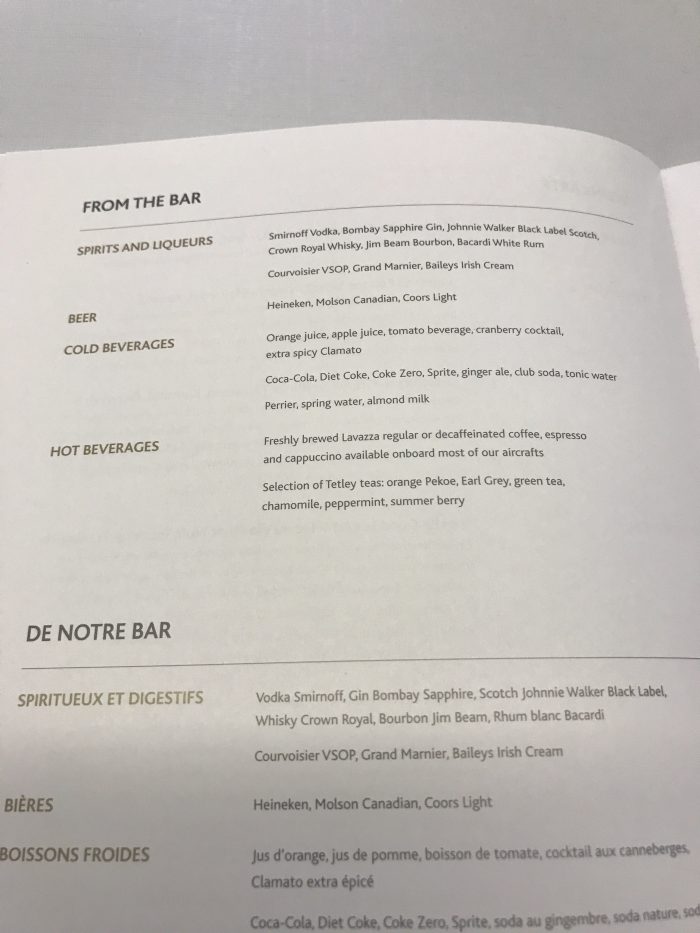 Selina, the Air Canada flight attendant for the first part of the flight, was outstanding. Not only was she friendly, the service was also great. As soon as the initial drink service was done, she passed through the business class cabin again asking if anyone wanted refills. I rarely see that without having to ask, since the flight attendants usually move on to food prep, but they were great about this throughout.

The meal was decently healthy. The first course was smoked halibut with salsa verde, pine seeds, and fresh arugula. What they called “salsa verde” was actually pesto, which was fine by me. It was a nice dish. Cold seafood generally seems to be done well on inflight meals. It was served with a mixed greens, bell pepper & balsamic salad as well as room temperature pretzel bread. 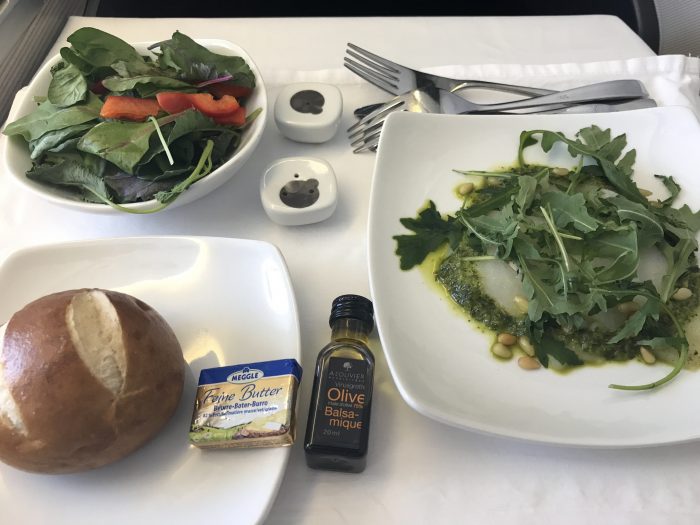 I opted for the pasta for my main course. It was ravioli filled with ricotta and asparagus in a tomato garlic sauce. It was a bit small as a main, but given all the other courses that was perfectly fine. The only reason why I would have wanted more is that it was quite good. 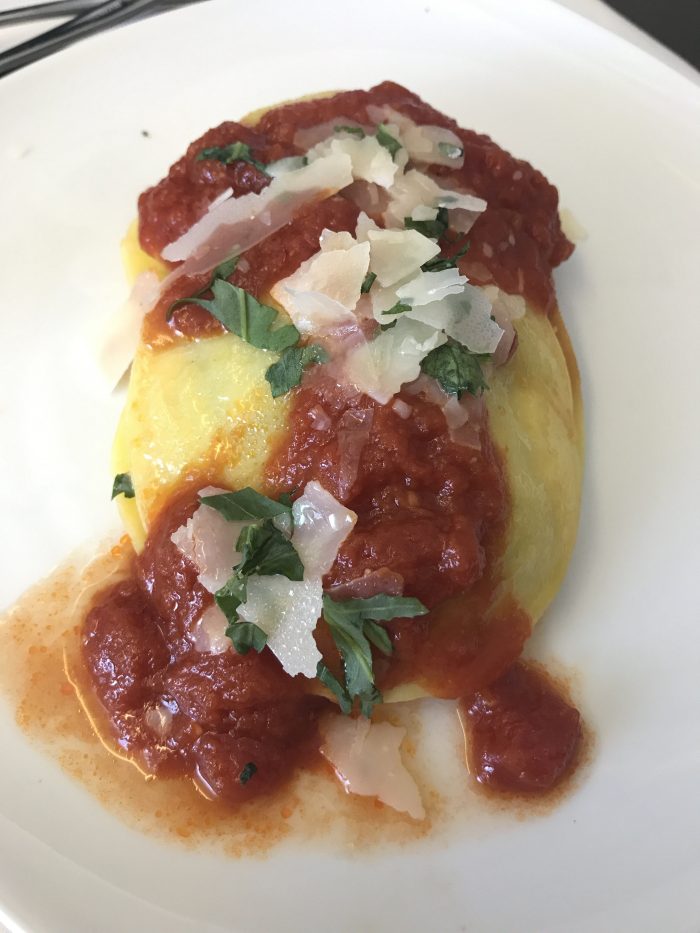 Next, a cheese cart was wheeled around. I had expected this to be offered as a choice for dessert, but instead it was a separate course of its own. The Bergader blue was especially nice. I had it with a glass of port Dow’s LBV 2011 which I knew much more about thanks to having gone port tasting in Porto. 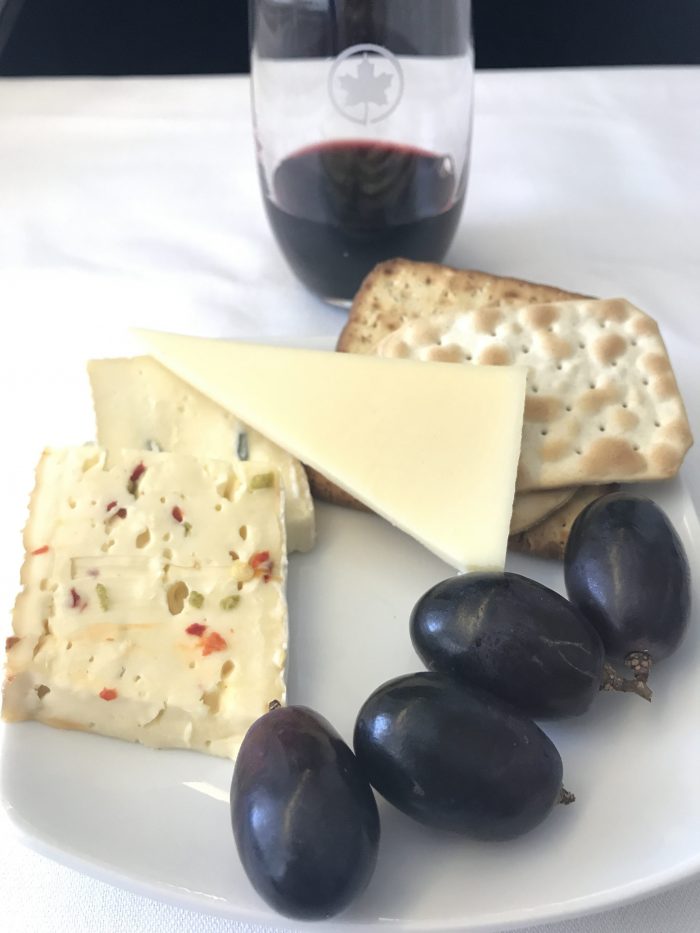 Finally, it was time for ice cream. 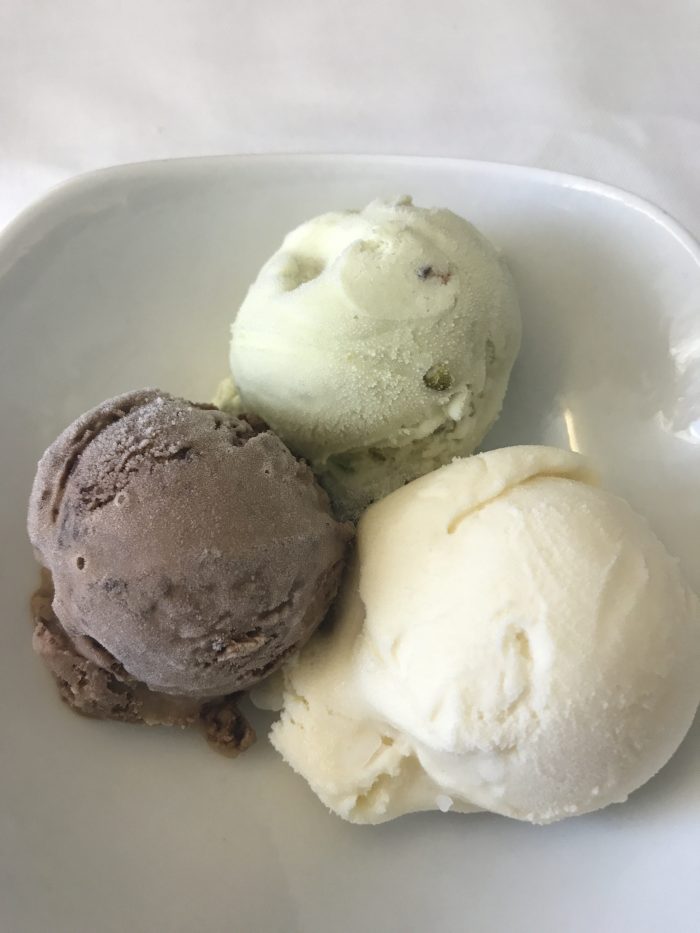 Service finished about 2 hours after takeoff. By this point, I had finished the excellent “I Am Not Your Negro”, a documentary about James Baldwin, so I started “Split”. The wine had made me a bit sleepy, so about halfway through I stopped it for a while and took a nap.

After my nap, I went to use the lavatory. That’s not normally worth noting, but the restroom had a window, which is rare. It’s quite lovely to have this view while peeing, I must admit. 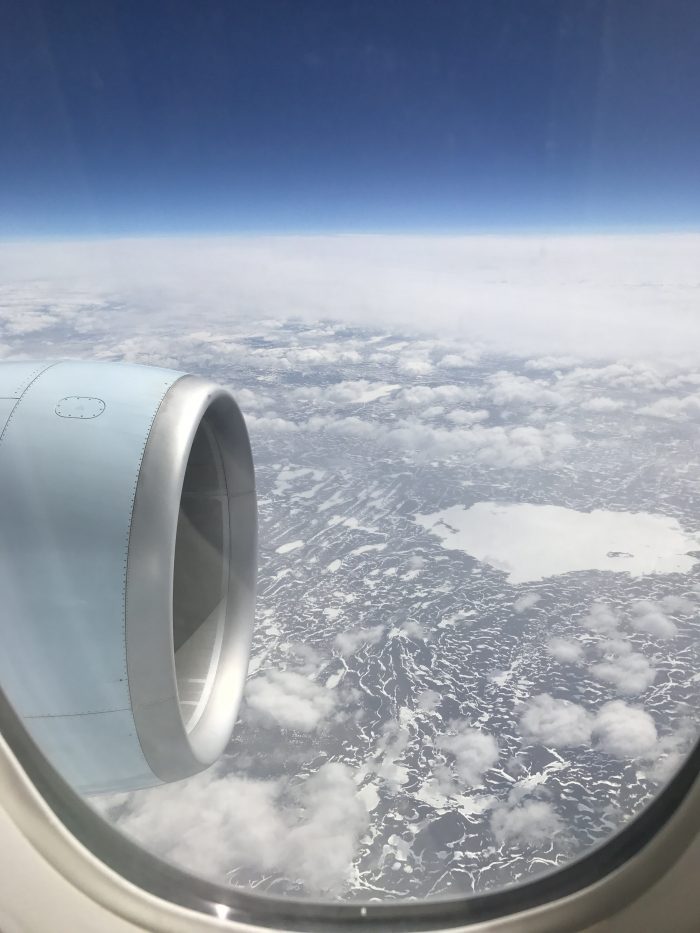 I returned to my seat and started “Captain Fantastic”, which was also a decent film. With about 90 minutes left in the flight, a cold course was served. It consisted of serrano ham, melon, potato salad, oranges, and chocolates. 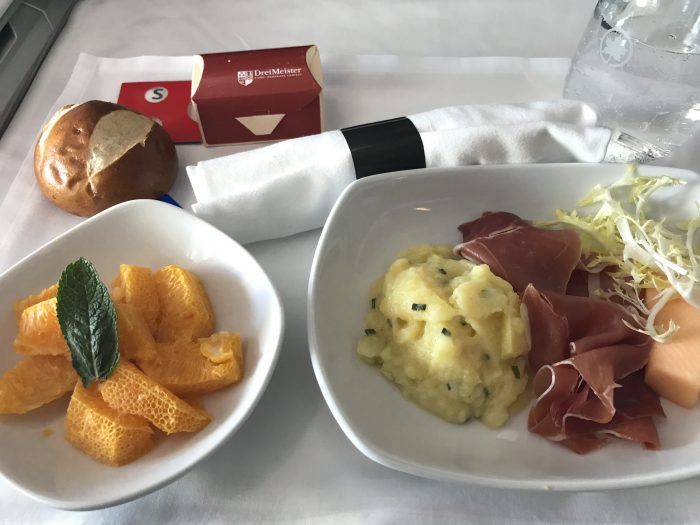 The flight attendant shift had changed by this point, and service notably slipped. First, the flight attendant skipped over me completely when taking drink orders, then after I ate my food, it took him forever to come around and take my tray. With about 30 minutes to go in the flight, he came around to take the nice set of headphones. He told me I could use the earbuds still, but I told him they weren’t working. He said he’d bring me another set, but then he never did.

I realize these are not major complaints, and it’s great to be able to fly in a premium cabin no matter what. However, there shouldn’t be this disparity in service levels. It left me questioning which was the real experience was it the phenomenal service for the first part of the flight? Or was it the lazy service I’d received in the latter portion?

Overall, my first Air Canada business class experience on my flight from Frankfurt to Calgary was great. The seat was nice, the food was good, and if the service hadn’t slipped, I’d recommend it without hesitation. Hopefully the experience I had at the end was an anomaly.

Here are a few more notes that were specific to having a connecting flight to the United States in Calgary. While I didn’t have to go through Canadian immigration & customs, I still had to go through the Calgary Preclearance facility. I did have a 2.5 hour connection, so it killed some time, but it renders Global Entry pointless. I had to wait in a separate line with one other person near Canadian immigration because there was nobody there to direct passengers who were heading to San Francisco. Eventually, we were walked to the separate preclearance area. There, my bag was pulled for extra screening, as was the other person’s. I think it may have been due to boredom since so few people were connecting. The screener then pulled literally every item out of my bag, even flipping through the pages of notebooks. As a result, I ended up having only about 90 minutes to hang out in Calgary’s Transborder Departures Aspire Lounge before my flight to San Francisco.