For the second straight morning of my trip to Pilsen, I started the day drinking Bohemia Sekt. The previous morning, I had joined a group of travel bloggers on a train journey across the Czech Republic as part of a press trip to Pilsen following TBEX Ostrava, during which we were treated to complimentary Bohemia Sekt. This time, we drank the sparkling wine on a tour of the Bohemia Sekt Winery near Pilsen. It’s a tough life to start days out like this. 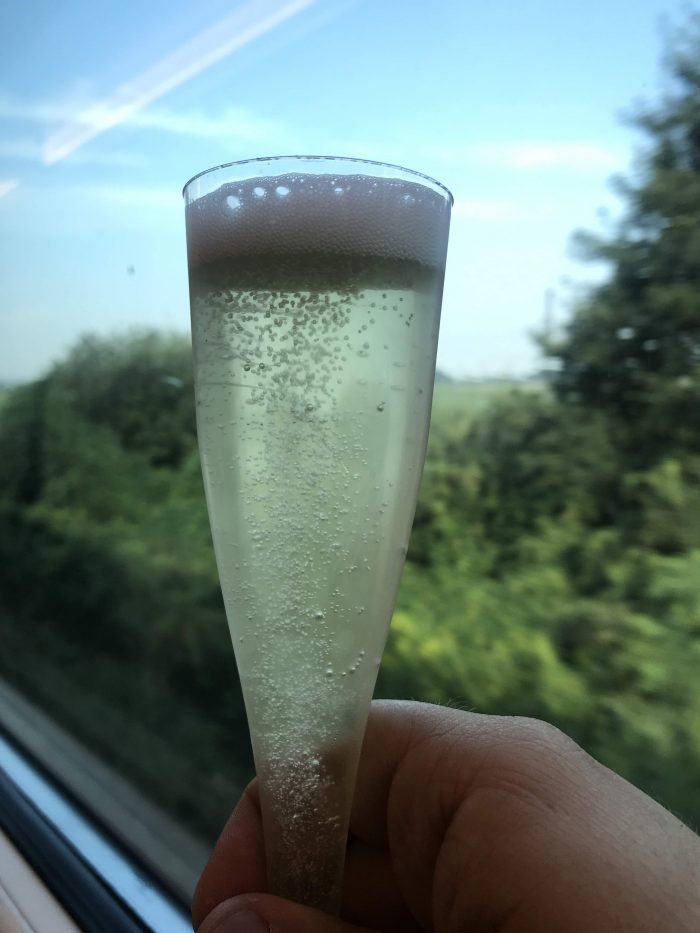 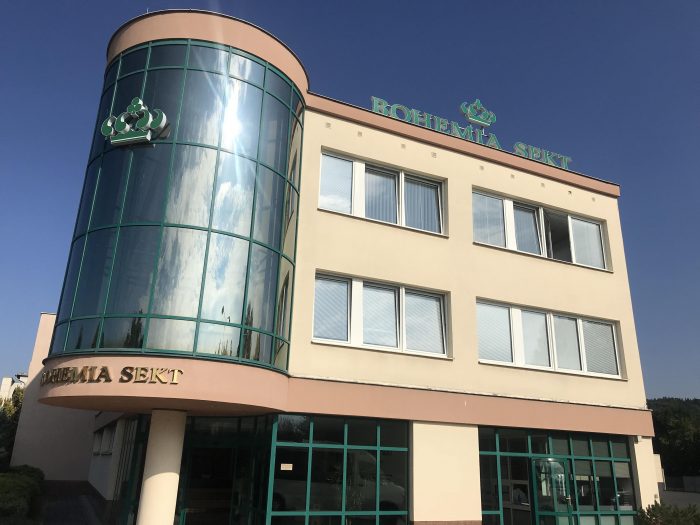 During our tour of the facility, we learned more about the history of Bohemia Sekt. 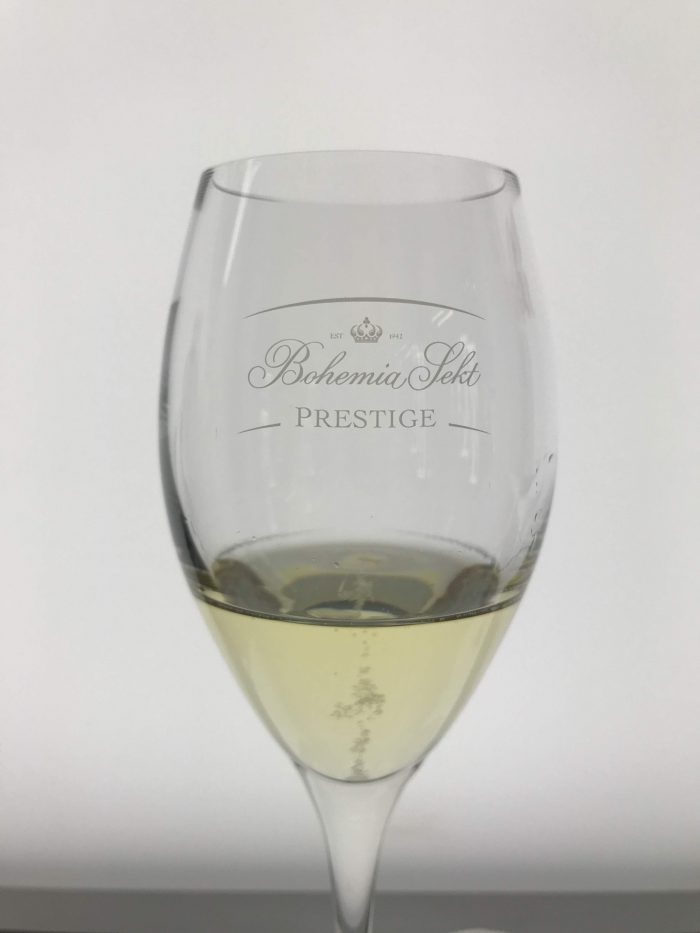 The Bohemia Sekt Winery is located in Starý Plzenec, which is also known as Old Pilsen, as it was the original site of the town. The town was moved about 6 miles (10km) to its current location in 1295.

In 1942, work began on converting a former brewery into a production facility for sparkling wine. French winemaker Louis Girardot headed to Bohemia from his native Champagne to create “Champagne de Bohéme” using his knowledge in combination with Bohemian grapes. The grapes used in Bohemia Sekt wine come from South Moravia, which is located on the same latitude (49 degrees north) as Champagne. 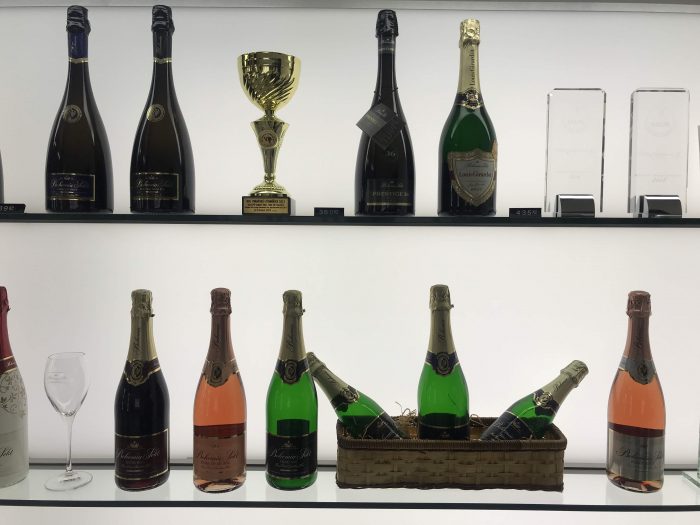 1945 was a momentous year both for the region as well as Bohemia Sekt. American troops arrived to liberate the Czech Republic just in time to drink the first batches of Black Widow sparkling red wine, which was named after the Northrop P-61 Black Widow fighter plane. And drink they did. The liberating forces drank some 37,000 bottles of Black Widow during the celebration, though the locals were quite game to help in that task.

After learning about the history of Bohemia Sekt, we headed down to the cellars to learn more about the fermentation & bottling process. There are two different processes used by Bohemia Sekt to make their sparkling wine: the classic method & the more modern method. The classic method is limited in its capacity, which is why innovations needed to be made to produce more wine. In the past, Bohemia Sekt was limited to just 40,000 bottles per year, but now the new production line can do that in a single shift! 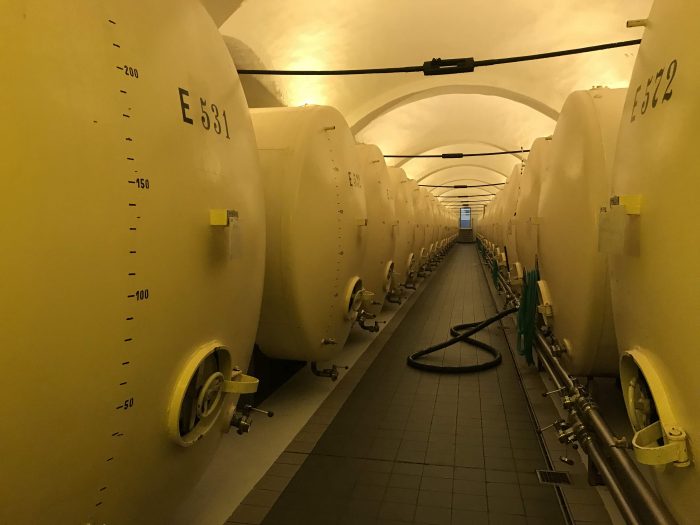 Most of our tour focused on the classic method of wine production, as it’s more accessible. First, the sparkling wine takes 12 days to ferment. These massive tanks hold the fermenting wine. The tanks vary in size – some are 18,000 liters, but then there is also one that holds a whopping 1 million liters! 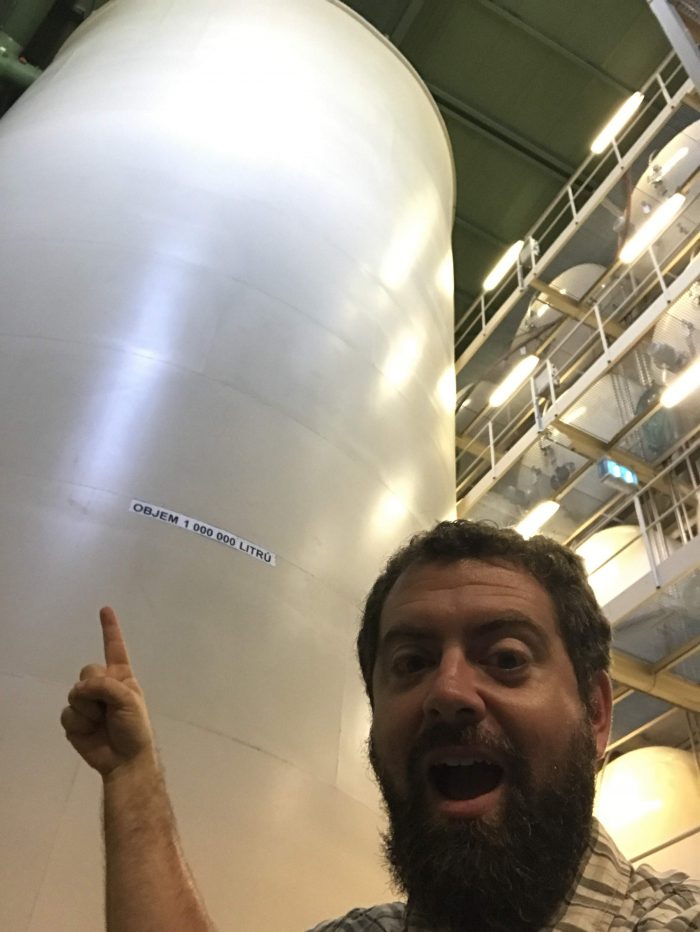 Then, a group of six women put the wine through the entire bottling process. It’s impressive to see them at work. Bottles full of wine aren’t particularly light, and given that one step of the process involves shaking the bottles, it’s quite the workout when you imagine doing it all day long. I would not want to challenge anyone here to an arm wrestling match. 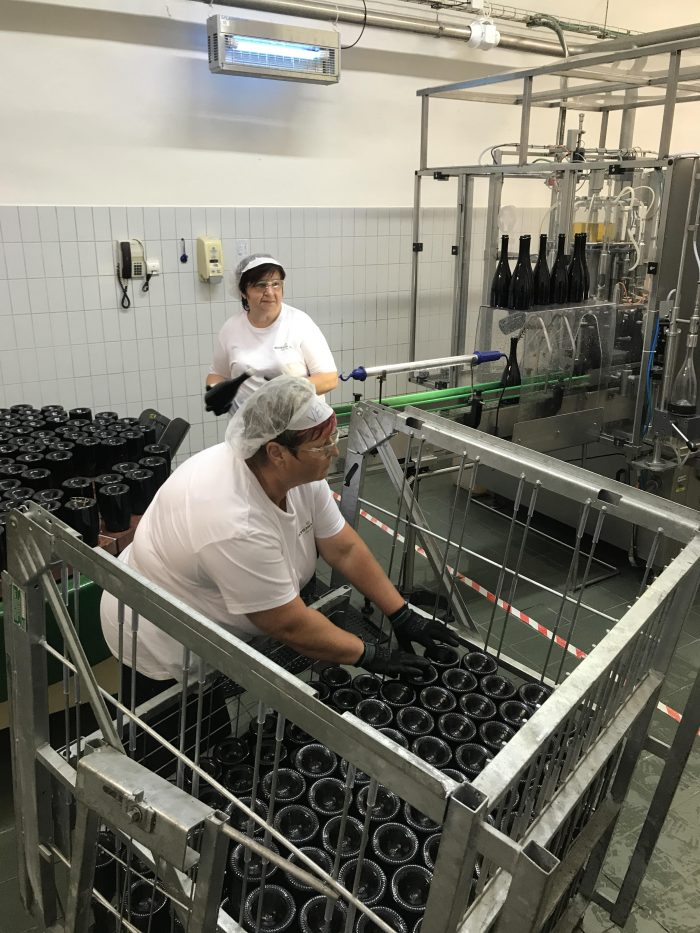 When I asked if there was any particular reason why the line is all-female, I was told there really isn’t one. The company has always had many women working for it ever since World War II, and that’s just continued to the present day. The workforce is unintentionally progressive in that way. 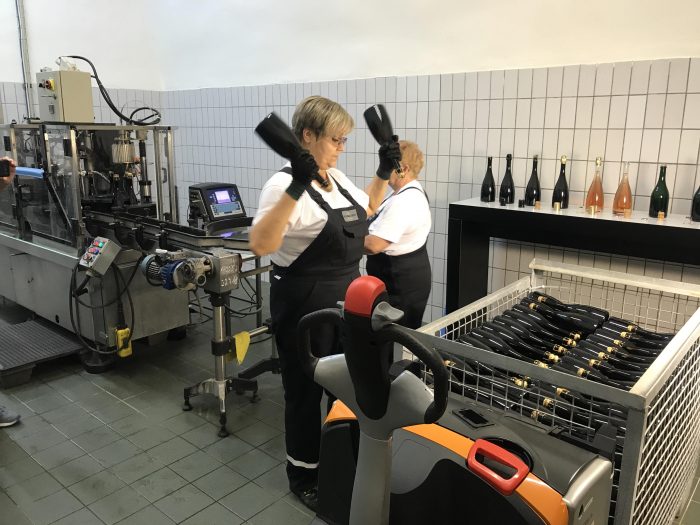 After bottling, the wine spends 40 days in racks that move the bottles bit by bit. 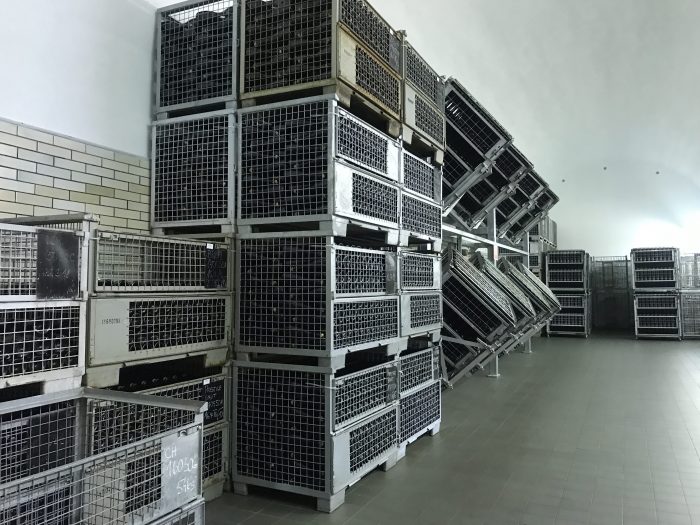 Bohemia Sekt produces 16 million bottles of wine per year. Just 200,000 of these bottles are made using the classic method, which is still impressive when you consider that it’s done by these six women. The rest of the bottles are produced with the new method. The company as a whole employs 280 people across the Czech Republic, with 140 at the winery near Pilsen, 20 of which work in production.

The 16 million bottles of Bohemia Sekt comprise some 70% of the Czech market, which is why they are synonymous with sparkling wine or champagne to everyone in the country. However, 97% of their products are sold within the Czech Republic, which is why they are not known elsewhere.  Given that the population of the Czech Republic is just over 10 million, this means that your average Czech drinks 1.6 bottles of Bohemia Sekt per year.

After our tour of the winery, it was time to get back to tasting more Bohemia Sekt. We’d had one glass to welcome us upon our arrival, but now we would get to try several more. 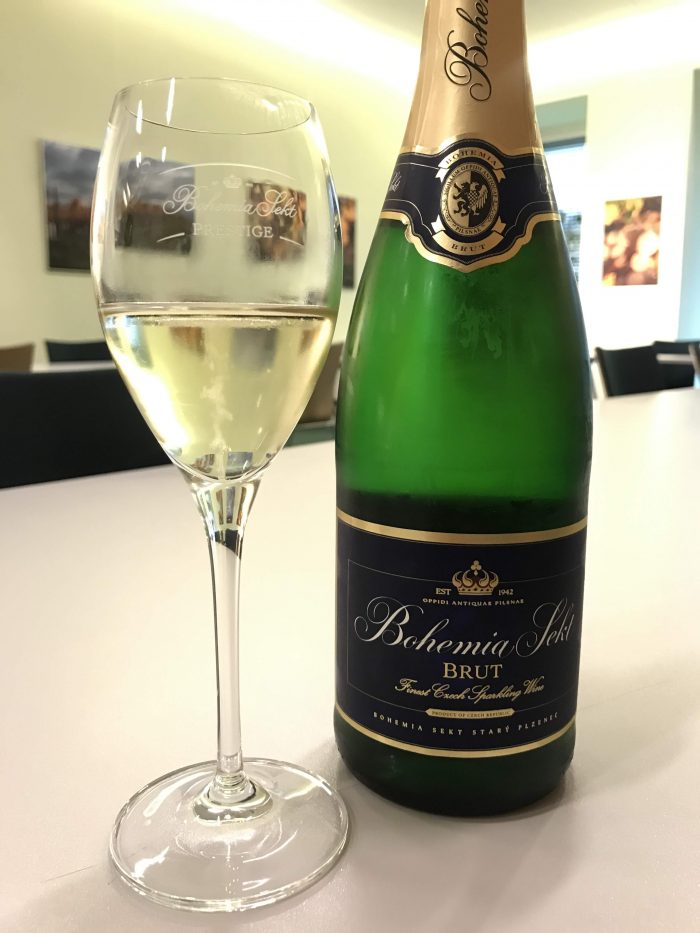 One thing we wished we could have done was sample two sparkling wines that were identical except for the production process, but unfortunately we weren’t able to do so. Is there a taste difference between the classic method and the old method, or is it just a perception of being more artisanal that makes the classic method more appealing?

Despite having some cheese with the wine & having eaten breakfast at the hotel buffet, we were all a bit tipsy as we left Bohemia Sekt. There are certainly worse ways to start your day.

Disclosure: My visit to Bohemia Sekt was part of a press trip to Pilsen following TBEX Ostrava hosted by Visit Czech Republic & Visit Pilsen. All thoughts are 100% my own. 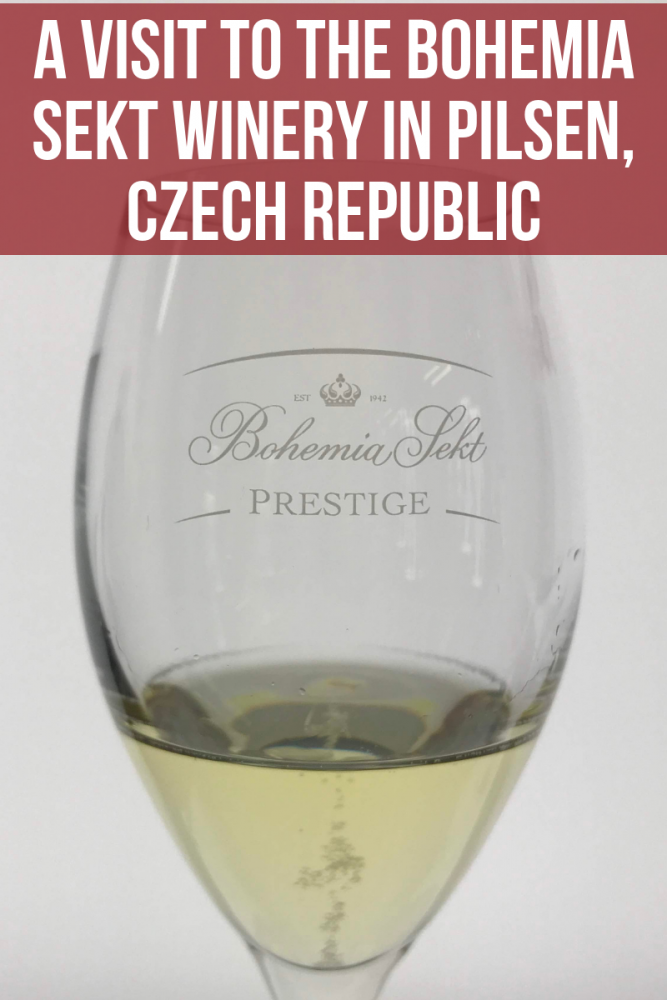