Michelin-starred restaurants generally bring two words to mind: Expensive & quality. However, in recent years, Michelin has been adding a few more restaurants to their lists that are accessible to everyone. Whether you think it’s great that they’re recognizing that not all delicious food & wonderful dining experiences need to be expensive, or you think it’s a gimmick to get more attention, the budget restaurants that Michelin has starred do have great reputations. I’ve had plenty of delicious ramen in my life. But how good would Michelin-starred ramen be? For that, I went to Nakiryu in Tokyo.

How to get ramen at Nakiryu in Tokyo

Nakiryu is located a short walk from Otsuka station in the Toshima Ward. It’s a bit off the beaten path for visitors, but it’s easy to get to thanks to the JR Yamanote Line. You can also reach it from Shin-Otsuka on the Marunouchi Line. The full address: Japan, 〒170-0005 Tokyo, Toshima City, Minamiotsuka, 2 Chome−34−4 ＳＫＹ南大塚 (map). 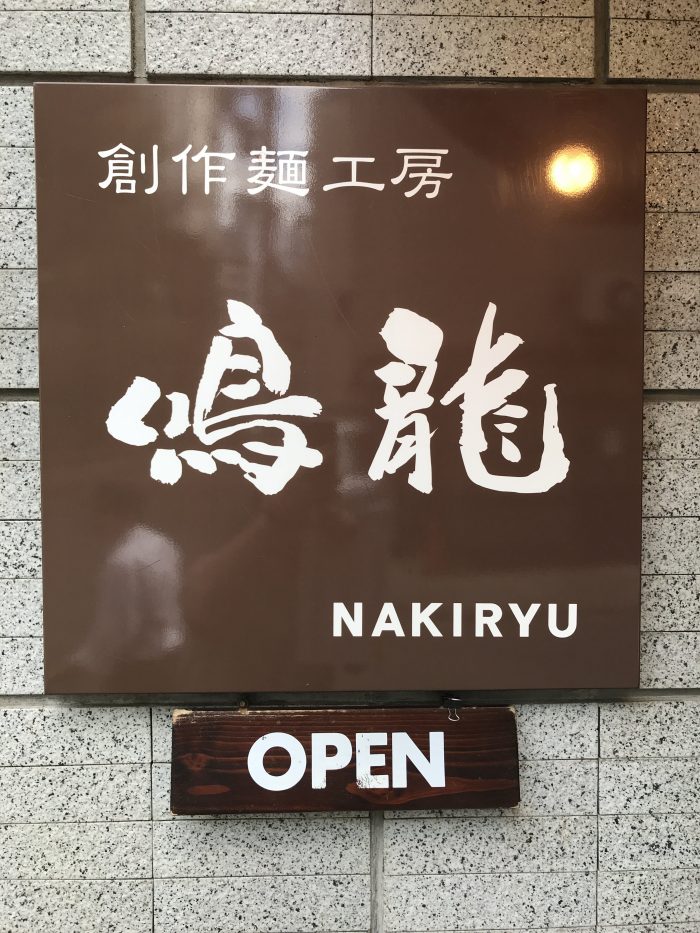 There are no reservations or complicated seating systems at Nakiryu. Each day (except Tuesdays when they are closed), ramen is available first-come, first-served. The restaurant opens at 11:30am. I arrived at 11:20am. There were already 25 people ahead of me in line. 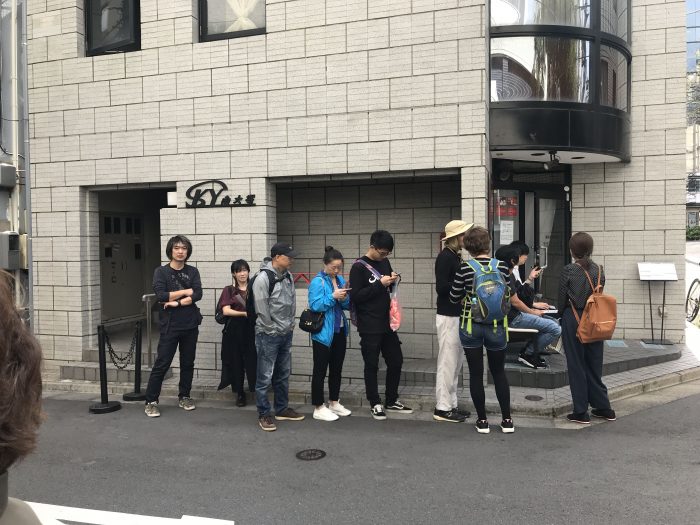 As with most ramen restaurants in Japan, there aren’t many seats. In fact, there are just 10 seats at Nakiryu, so I would have to wait until the restaurant had turned over a couple of times before I would get to eat. 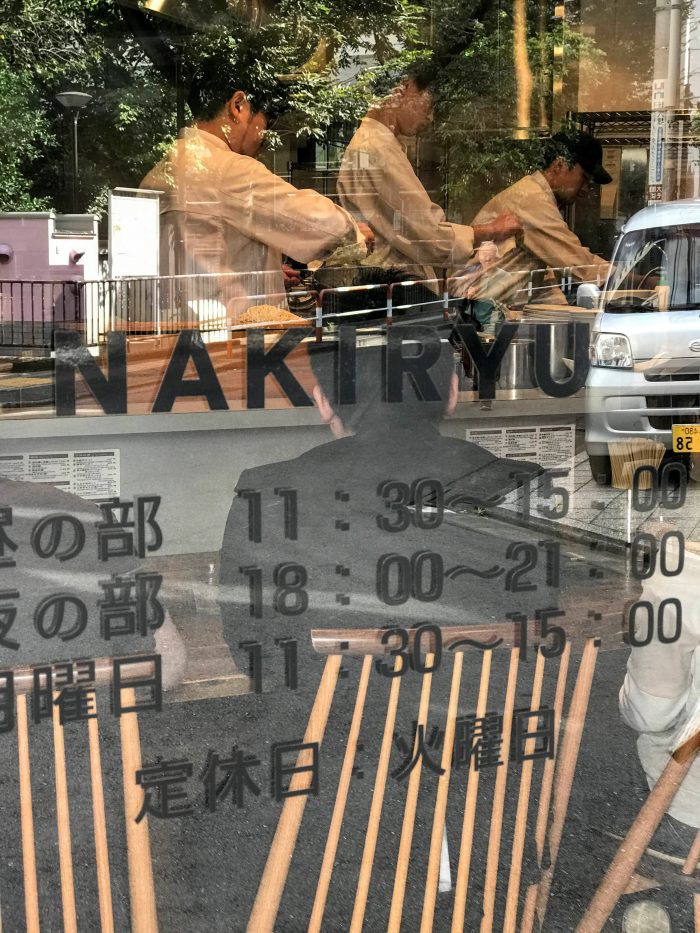 It was a nice day, so the wait wasn’t uncomfortable. The first part of the line was along the restaurant itself, but after these first 10 people or so, everyone waited across the street. The initial line was about a 70/30 split between locals & visitors. When I left, the line was shorter. While you run the risk of not getting in, there might be a sweet spot of arriving closer to the end of the lunch hours. It appeared that the entire party needed to be present as you entered the line, though in practice this seemed to be lightly-enforced, as a guy in front of me had a friend join him later.

While I waited, I chatted with the guys behind me, a group of visiting Australian students who happened to be staying just across the street. They had no idea that they were in line for a Michelin-starred ramen restaurant until they started researching while in the line. They had just seen a line, figured it must be for a good reason, and decided to check it out. This is a great rule for traveling. If you see people lining up at a restaurant when everywhere else in the neighborhood is quiet, there must be something interesting going on. You might stumble upon deliciousness.

The first batch of customers started wrapping up their ramen meal after about 25 minutes. However, some people in this first group took much longer. Ramen is not meant to be a meal that takes a long time. You get in, order, eat, and get out. Most ramen restaurants have counter seating rather than tables where  people can sit across from each other & more easily converse. Japanese chain Ichiran has perfected this anti-social dining, serving up ramen at private individual booths. Please keep that in mind if you visit Nakiryu or any other ramen restaurant with a wait. Other people behind you would also like to eat, so please don’t linger. After you’re gone, you can have a long talk about how amazing it was. Because it was awesome. All ramen is awesome, but especially this one.

Eating ramen at Nakiryu in Tokyo

I finally got into Nakiryu around 12:45pm. My first step was ordering from the ticket machine. I’d already been given a menu to read as I neared the door (both in English & Japanese), so I knew what I wanted. 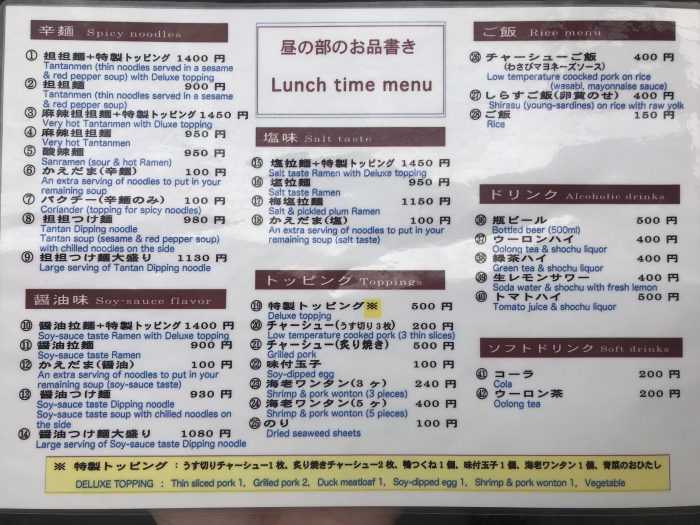 The machine wasn’t difficult to figure out, since everything was numbered. One note: there was a sign up on the machine saying “one bowl per customer”. This makes sense, since some people could easily down a couple of bowls after the wait. If you want to try multiple ramen varieties, show up with a friend. 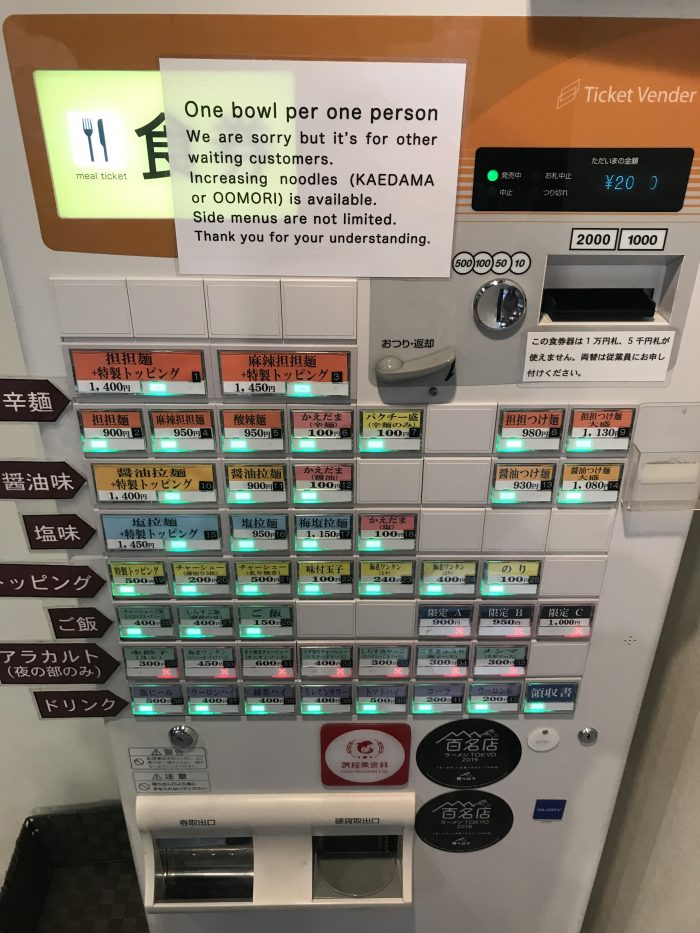 There are several different ramen styles available at Nakiryu, but tantanmen is the house specialty. There are four options for tantanmen at Nakiryu: regular, spicy, tsukemen (where noodles are dipped into the broth) and sanramen (a spicy sour combo). The other ramen options at Nakiryu are shoyu & shio.

I opted for the tantanmen ramen. Tantanmen is a style of ramen that I’d only recently had for the first time. It’s based on Chinese Sichuan dan dan noodles. The uniquely-flavored broth is made from sesame seeds & spicy red peppers.

Not wanting to risk something that might be too spicy to enjoy, I chose the regular tantanmen, which I upgraded to a deluxe bowl. I would highly recommend doing the same, or at least ordering additional toppings that you prefer. The deluxe comes with thin-sliced pork, grilled pork, duck meatball, soy-dipped egg, shrimp & pork wonton, and vegetables. The deluxe tantanmen bowl was 1450 yen, while regular would have been 900 yen. While there’s other cheaper ramen around, that’s still an amazing deal for the quality of the food.

If the ramen & toppings aren’t enough, you can also order a side of pork belly over rice, which is highly regarded, & I regret not getting it. You can of course order extra noodles if you’d like.

The counter at Nakiryu ramen seats 10 people. That said, it was surprisingly spacious compared to some ramen counters I’ve been to. Nobody was elbowing each other at all. 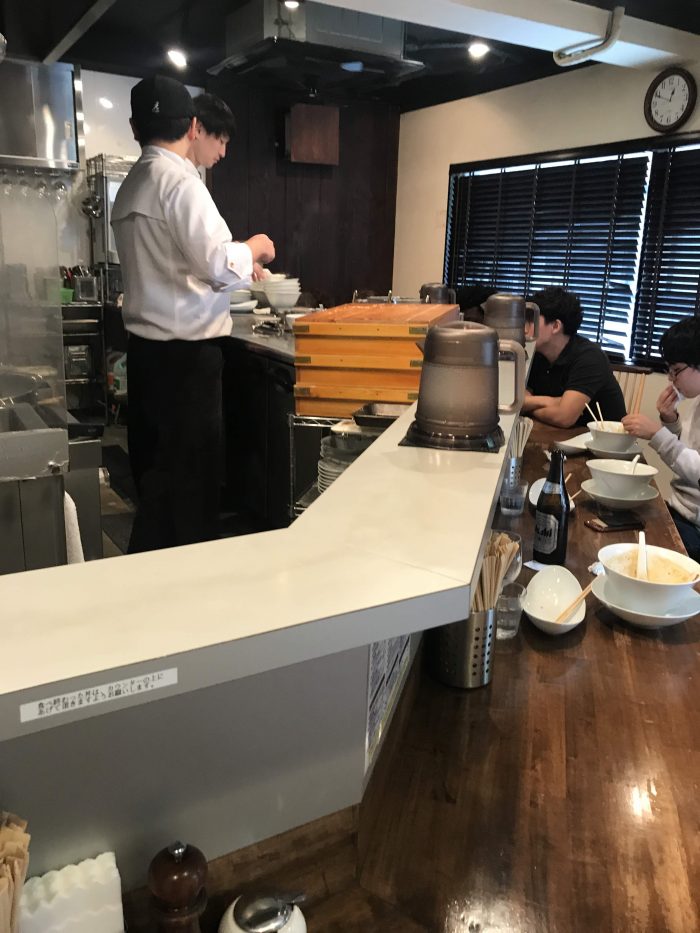 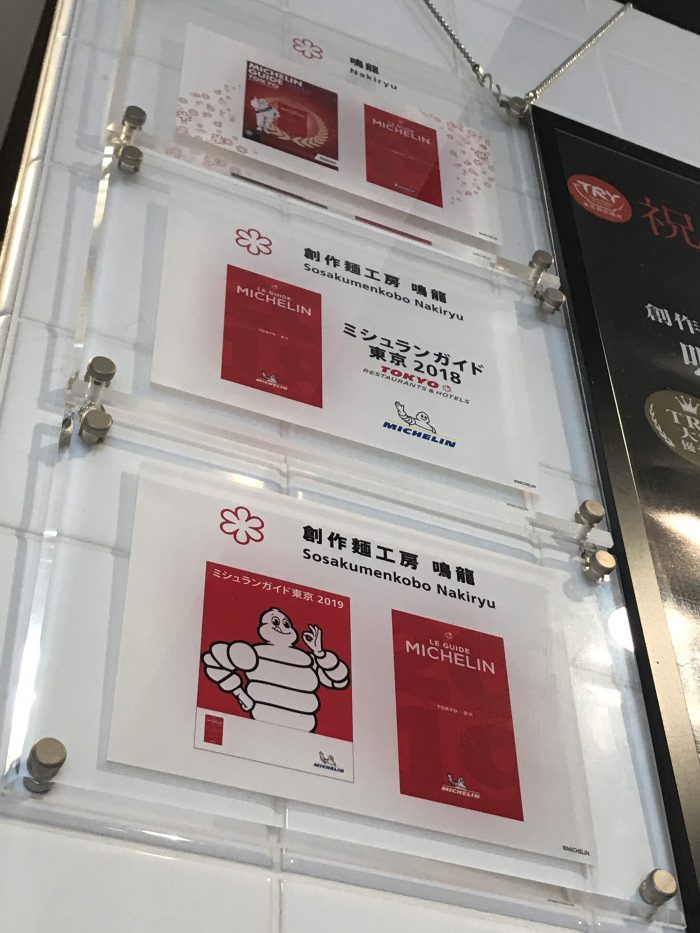 After my long wait outside, my food arrived just a couple of minutes after I ordered, as is customary at a ramen shop. This step doesn’t take long, all of the long preparation has already gone into the ingredients. 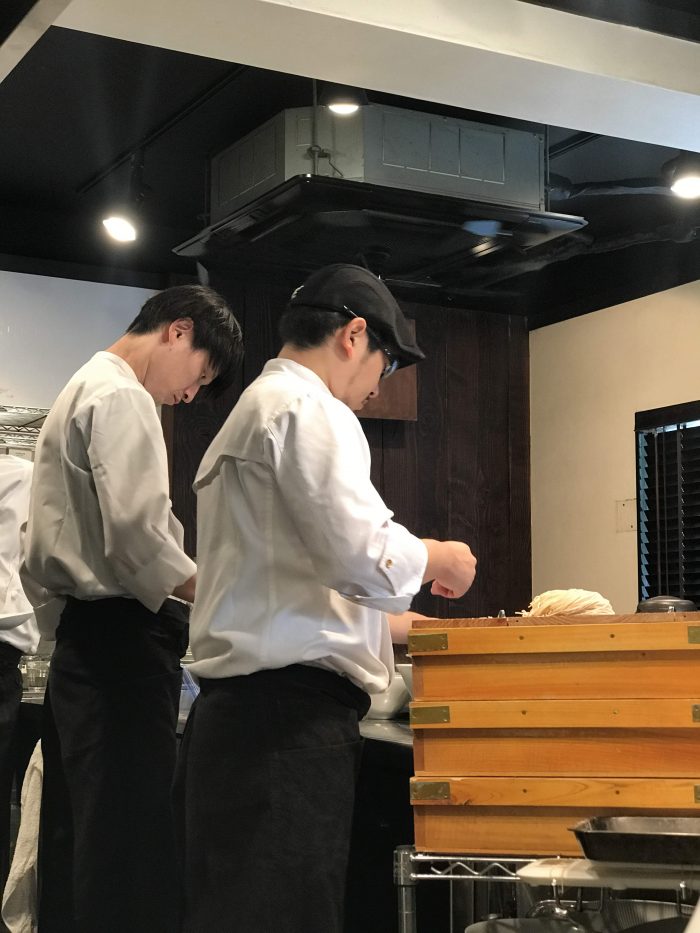 Unlike most ramen places, there is some assembly required if you’ve sprung for the deluxe tantanmen. All of the deluxe toppings are given to you in a dish, so you can then add them to the noodles & broth yourself. This lets you see just how much extra food you’re getting, & keeps everything at the optimal temperature until you’re absolutely ready to eat. 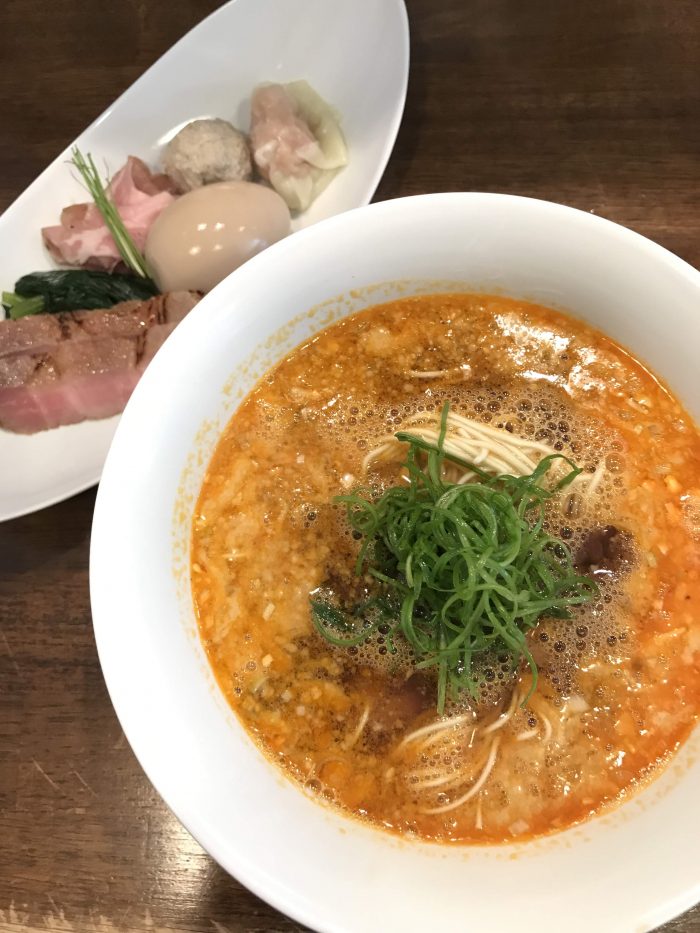 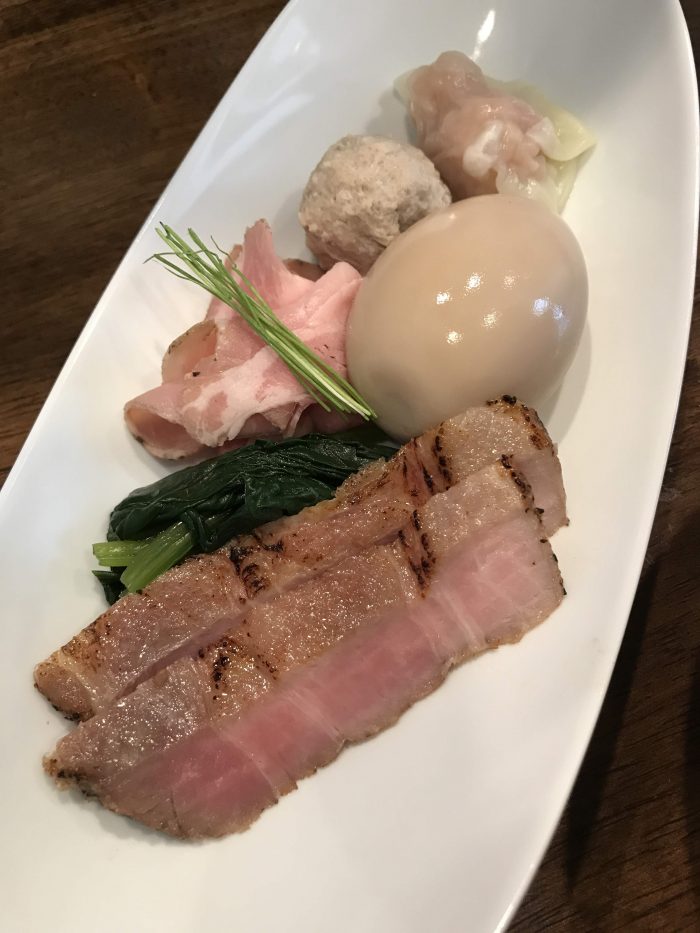 And I was finally ready to eat. 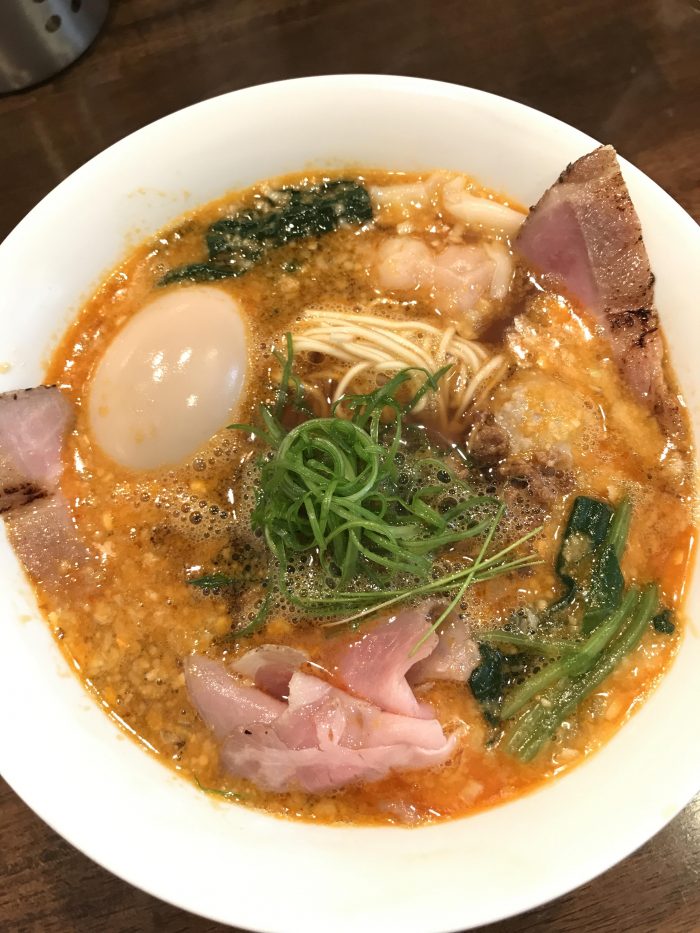 This was one stunning bowl of ramen. Yes, I knew it had been awarded a Michelin star. Yes, I’d already invested over an hour of my time waiting to get it. But every aspect of it was perfect.

The tantanmen broth was a flavor bomb that was so flavorful that I wanted to cry. Or perhaps I just got a bit of hot pepper in my eye. The flavors were nutty, rich, & packed with umami. The ground pork added an extra layer of taste & texture to the mix. The noodles were perfectly cooked to my liking, just firm enough, and thin enough to let the broth cover each strand well. 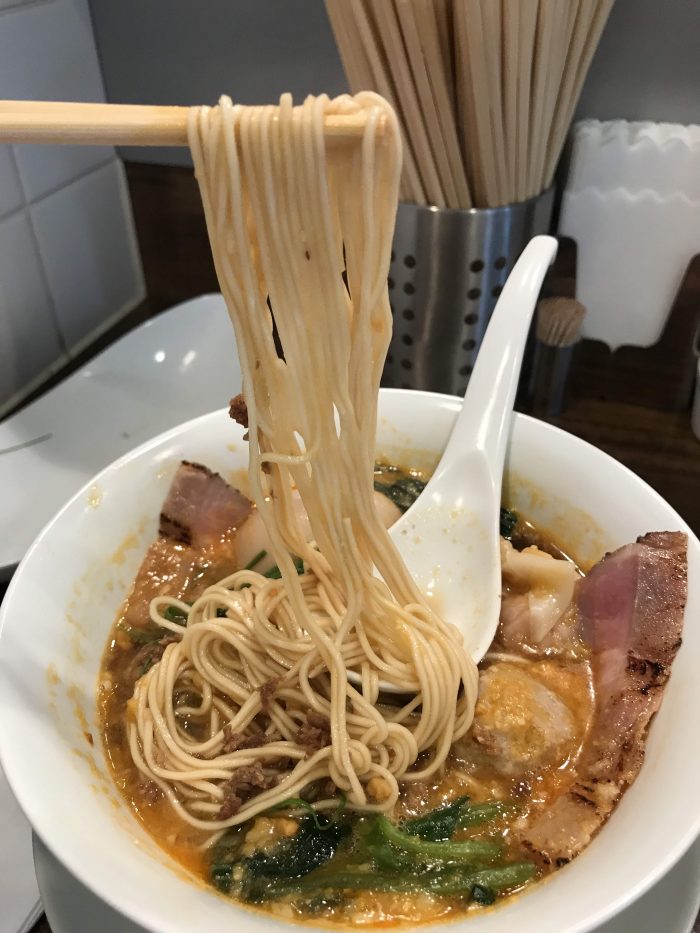 The toppings were probably the best quality that I’d ever had in a bowl of ramen. The grilled pork was especially fantastic. I wished I’d had the foresight to go for the full order, as I could have easily had more of it.

I was glad that I didn’t order the extra spicy tantanmen. The regular has a bit of a kick to it. It’s just enough to be interesting, but not so much that it overpowers any of the other flavors. I do like spicy things, but unless you are a spice-fiend who absolutely needs to try the spiciest things possible, I’d stick with the regular so you can get the full balance.

I finished my ramen at 1:15pm, a little less than two hours after I had arrived at Nakiryu. I’d planned for it to take about that long. I thought it was worth the wait, and I’d gladly do it again (provided the weather is nice). It’s amazing how places like this still keep their prices low even when people are queueing for hours outside. Given their fame, Nakiryu could easily charge twice as much for a bowl of ramen & they’d still sell out every day. It’s wonderful that they don’t even after receiving a Michelin star, instead focusing on continuing to make great ramen at a great price just like they have since they opened. 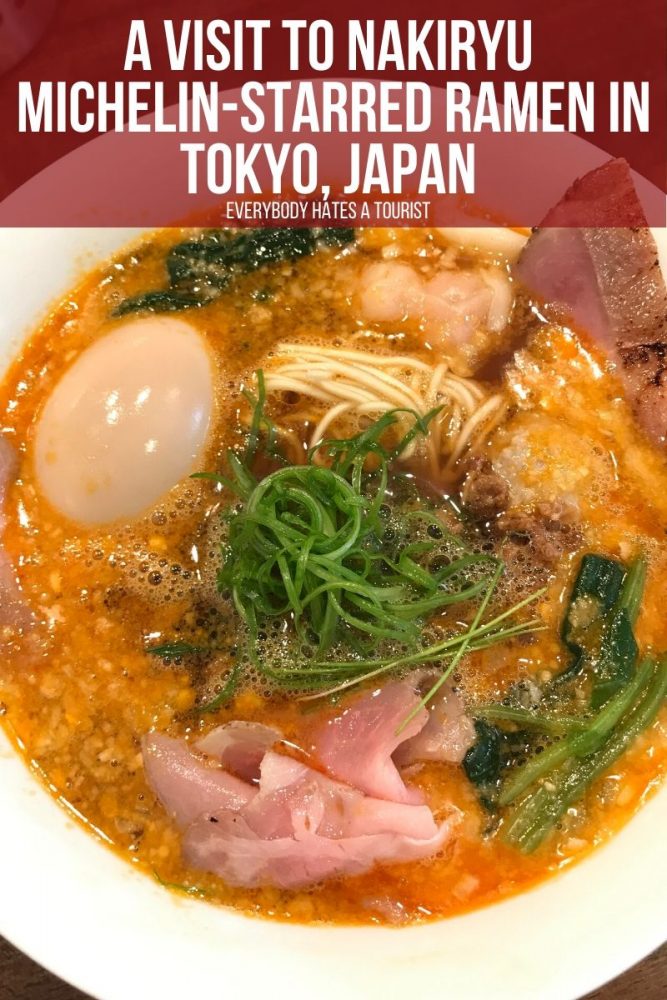