There were a couple of reasons why I had opted to stay in Nelson for a couple of days on my journey through New Zealand. First, I had been traveling on long bus journeys the previous two days, the first from Queenstown to Franz Josef, and the second from Franz Josef to Nelson, so I needed a break. Second, Nelson is a key area in New Zealand’s drinks industry, as the land is suited for the growing of both grapes & hops.

Given that I had only one day in Nelson & no car, plus even if I did have a car, I couldn’t drink & drive, I opted to do a half-day beer and wine tour of the Nelson area.

The name of the tour was “Wine, Brews, and Views” and it was run by Bay Tours Nelson (TripAdvisor

). The tour currently costs $98 NZD per person, and lasts 5 hours. Considering this includes tastings at two wineries, two breweries, and a knowledgable tour guide/designated driver for the afternoon, this is a solid value for the experience. Since I hadn’t booked ahead of time, I was lucky to book the last spot on that afternoon’s tour. 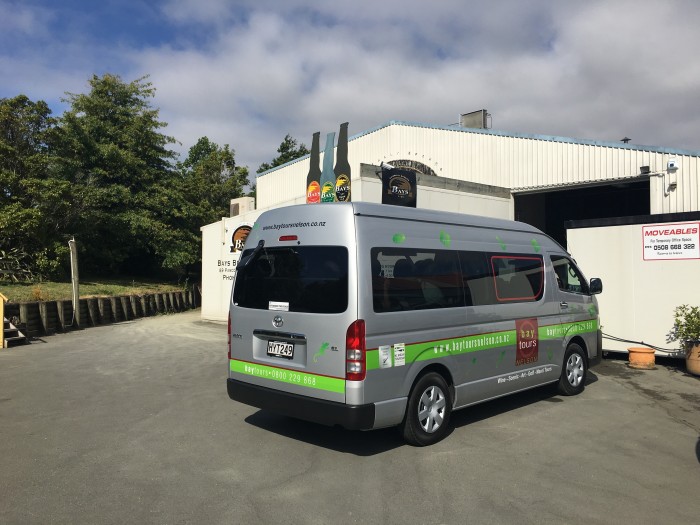 Our group was comprised of myself, a couple from the Isle of Wight, and a fun family who were visiting from Finland. They were great to talk with all day. We discussed everything from politics to hockey, with plenty of time to chat about beer and wine as well, of course. Our tour guide, Owen, was one of the owners of the company, and knew all about the region & the wine & beer industries. He even takes photos throughout the day, which are then posted on the Bay Tours Nelson website so you can download them later. We also learned facts about New Zealand, such as that the best sheep shearers can shear over 400 sheep in a day, which burns as many calories as running two marathons. Me personally, I’d rather drink and eat some lamb.

Prior to heading to the first winery, we stopped at an overlook with a great view across the blue water of Tasman Bay toward Abel Tasman National Park. Next time I visit New Zealand, I’ll have to go check that out, since I didn’t have time on this trip. 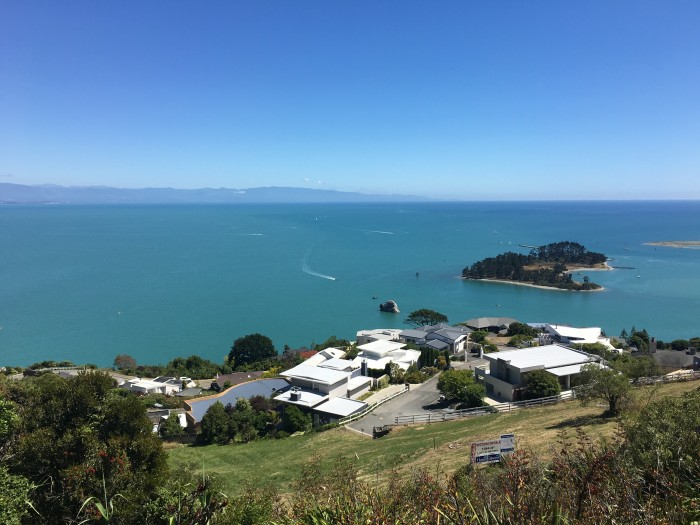 The Nelson area is home to some of the most successful wineries in New Zealand. Also, the wineries in the region are all family owned, which is nice to see. I like being able to support a family-run business rather than some multinational conglomerate. The wines produced around Nelson are mostly white wines, as it’s not the right climate for heavy reds. Sauvignon blanc accounts for 90% of production. Other wines produced include pinot noir, riesling, and chardonnay. There are lots of apples grown around Nelson as well, so ciders are also made in the region. 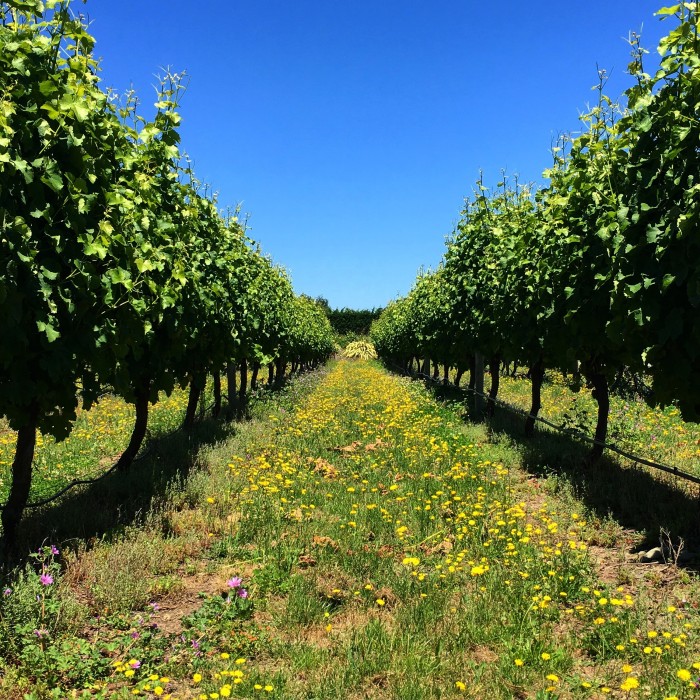 The first winery we stopped at was Milcrest Estate, a boutique winery. At about 10 acres, it’s much smaller than the wineries I’m used to visiting in California, which is cool. I like a more intimate winery as opposed to something that feels corporate. 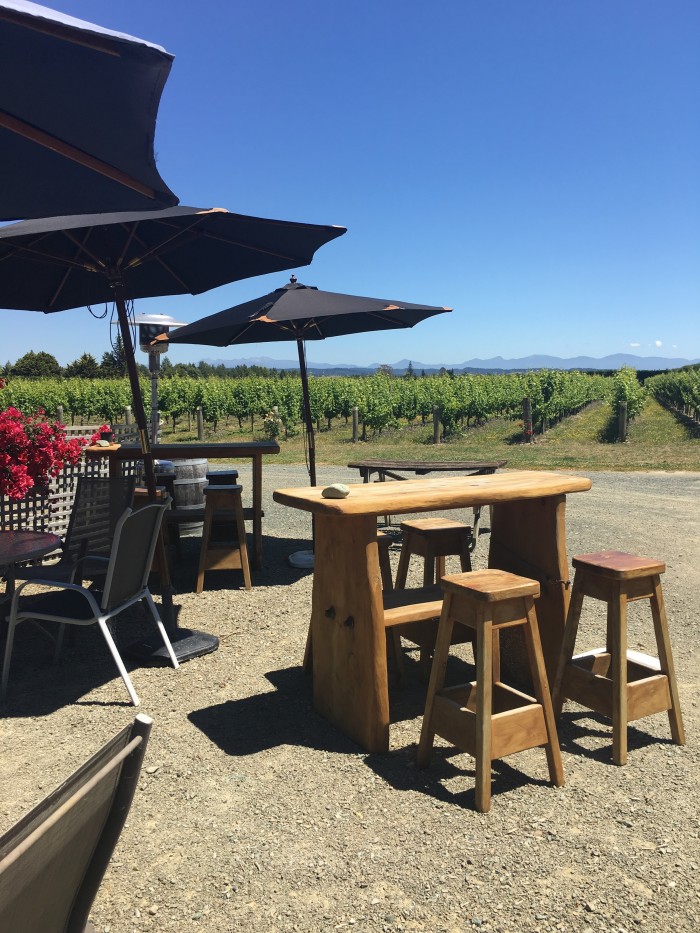 We all sat around a picnic table and had a nice wine tasting, complete with a great fruit & cheese plate. We had a sauvignon blanc, of course, plus a 2014 pinot gris, a pinot noir aged in oak barrels, a montepulciano, and a riesling. 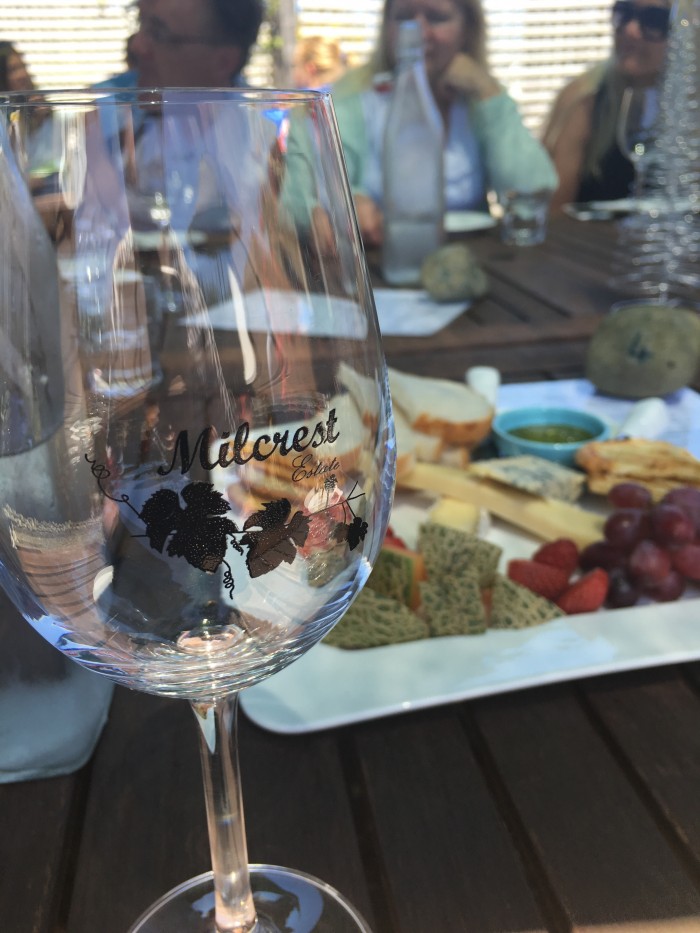 Our second winery of the day was Seifried Estate, which is the largest winery in the Nelson area, but it’s still a family-sized operation. Here we took a long break, doing a full tasting, plus having a nice lunch out on their lawn. I had a fantastic local cheese platter with a glass (or two) of their Zweigelt Sylvia. Seriously, look at this thing, it’s beautiful. 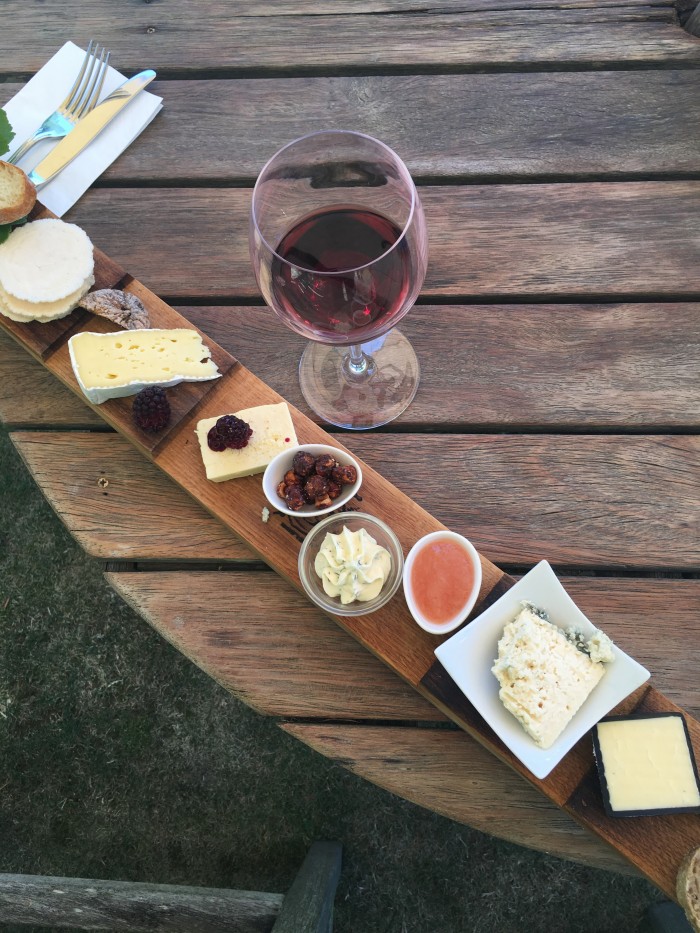 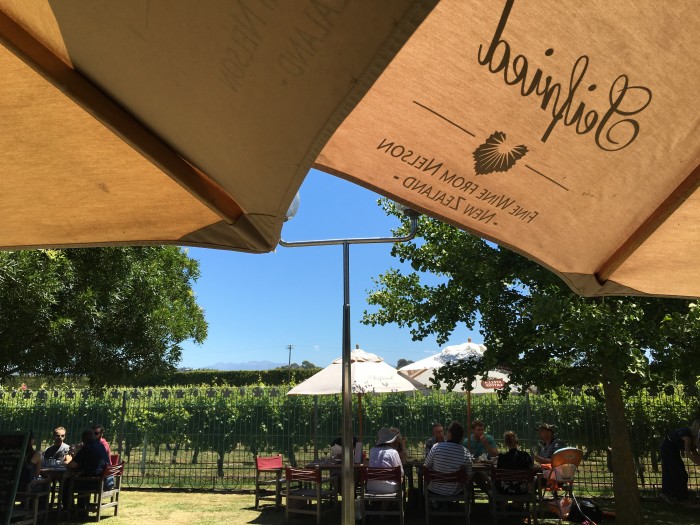 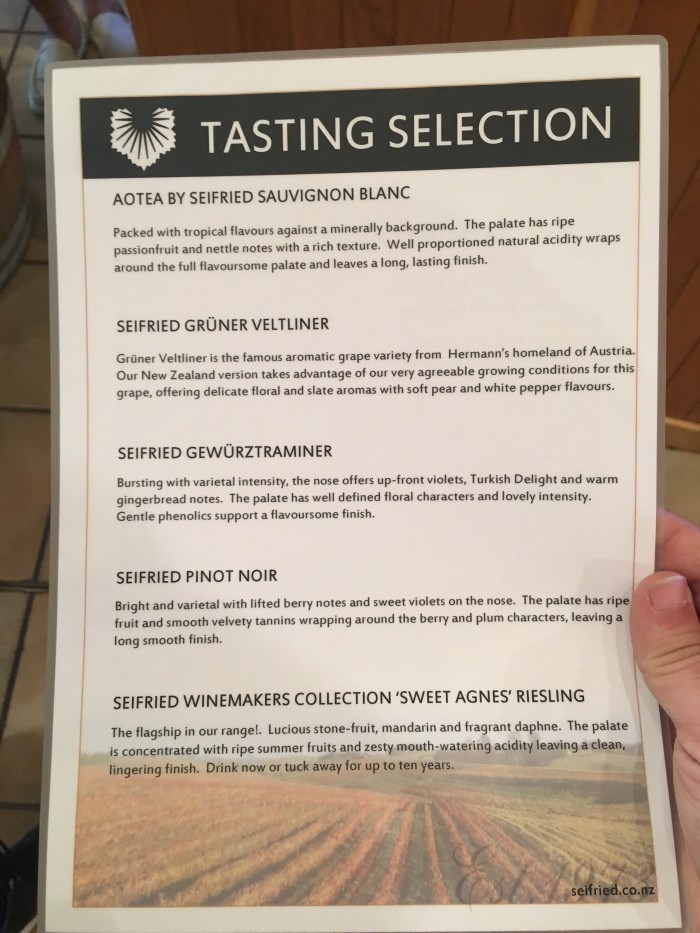 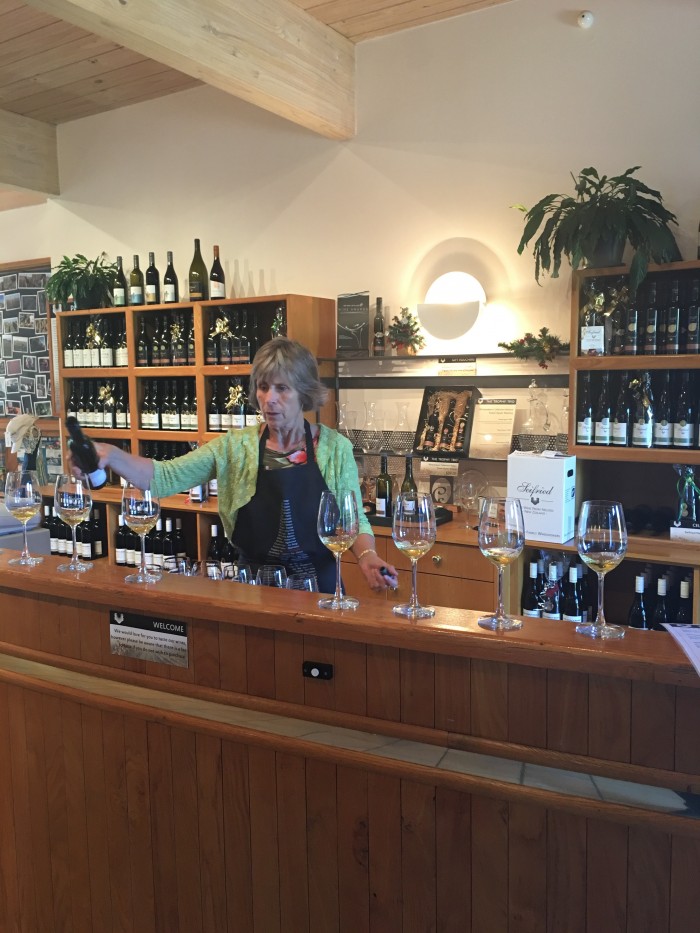 After lunch, we were off to the beer portion of our day. Owen was nice enough to take a brief detour to some hop fields, so I could see some future beer. Most of the hops grown in the area are Nelson Sauvin & Motueka. 95% of New Zealand’s hops are exported, so perhaps I will see these hops again someday. 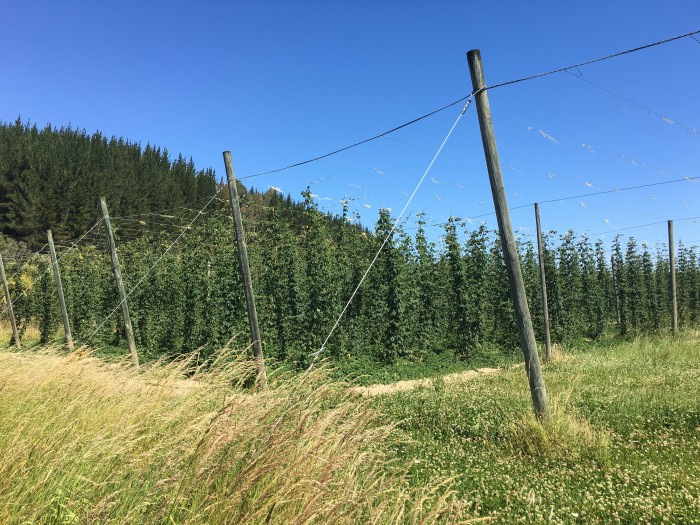 Our first beer stop was at Moutere Inn, the oldest pub in New Zealand. 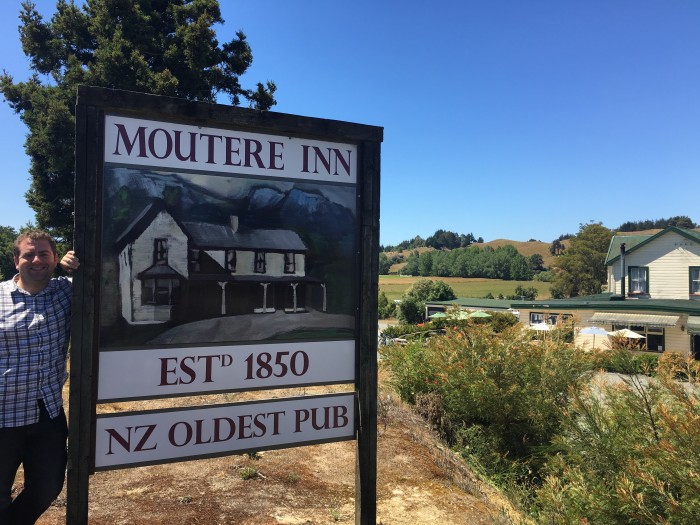 With it being yet another gorgeous day on the South Island, we sat out in the sun on the patio & had a variety of local beers and ciders. 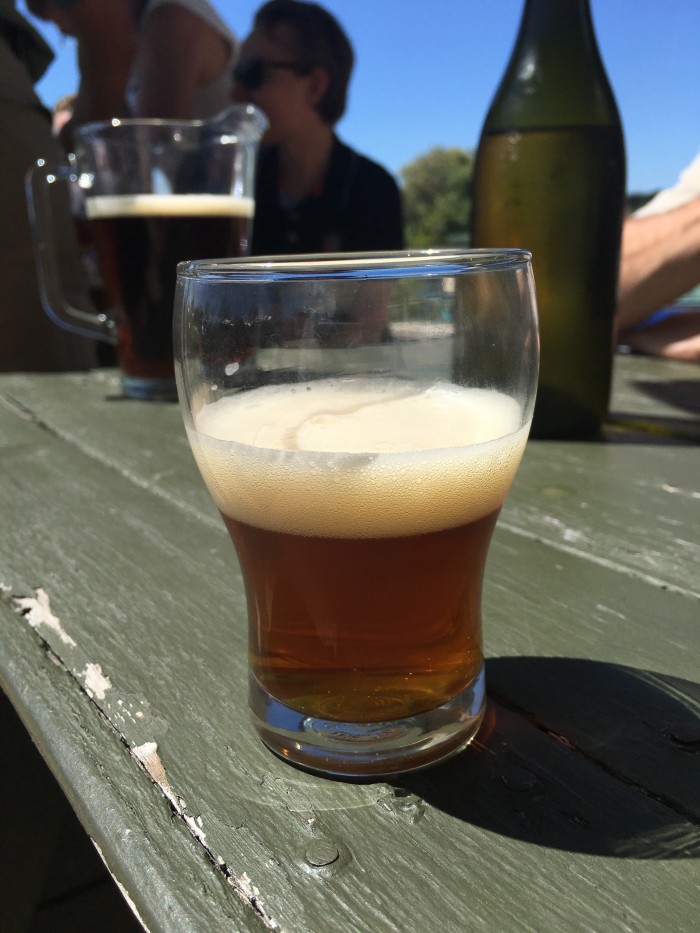 Our last stop of the day was at one of the oldest craft breweries in Nelson, Bays Brewery. Owner Peter McGrath showed us his brewing facility & took us through his full range of beers. My favorites were the Exclamator and the Urboc, which paired well with some of the cheese they also had for sale. 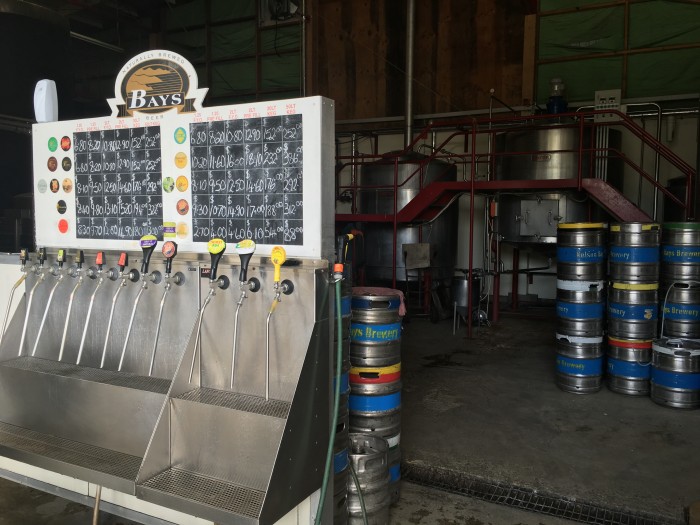 After our nice wine & beer tour around the area, it was time to head back to the center of Nelson. Although Owen was taking everyone else back to their hotels, he was nice enough to drop me off at a local craft beer bar, since I still had more beer left to drink in Nelson.