With my trip to New Zealand stretching through the holiday period, I figured that Christmas Day would be a great day to start the long, 2-day journey north to Nelson, since the buses were still running. The drive is one of the most beautiful in the world, so while 18 hours over two days is a lot of time to spend on a bus, at least there is plenty to look at. The first leg of my journey was from Queenstown to Franz Josef.

The bus was operated by Newmans Coach Lines, though I had bought my ticket through the Intercity website. The entire 430km drive takes about 8 hours, but that includes a couple of long stops along the way, plus several other shorter stops for photos & rest. There was also WiFi on the bus, though it was sporadic since it still required an outside connection. One drawback was that there was not a restroom on the bus, though there were at least fairly frequent stops. Keep that in mind if you have any health issues that require convenient restroom access. 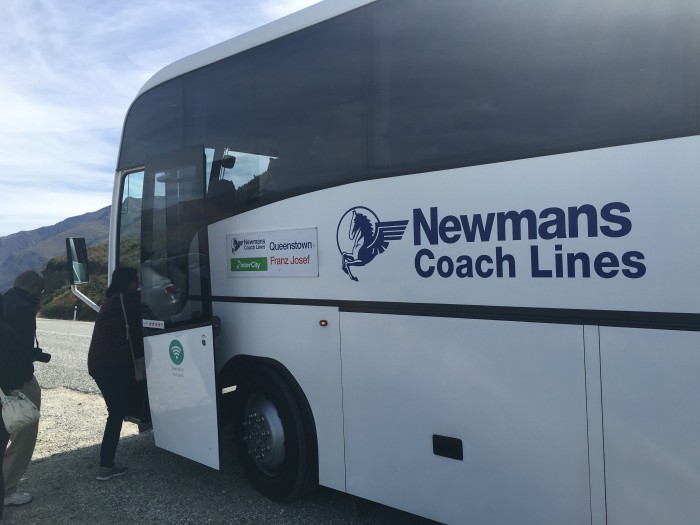 Like my day trip to Milford Sound from Queenstown a couple of days before, the bus driver acted as a tour guide along the way. It’s a nice addition to what could be a monotonous ride. While there is always nice scenery, it’s also good to get descriptions of what you’re seeing.

The journey starts by passing through the wine region just east of Queenstown. Vineyards lined both sides of the road. I wished I’d been able to spend more time in the area so I could tour the wineries, but it was time to move on. After passing the original home of bungee jumping in Kawarau Gorge, then Gibbston, we arrived at the first quick stop in Cromwell.

Cromwell is notable because part of the town was moved due to the construction of a dam. You can actually go scuba diving in the old town. The dam & lake were necessary as this part of New Zealand only receives about 30 centimeters of rain per year, which is 10% of what Milford Sound gets just 120km away. It’s the hottest, driest, and coldest place in New Zealand, since it’s the furthest inland. Temperatures can get as high as 38 or 39 degrees Celsius on the hottest summer days.

The region is the heart of New Zealand’s gold country, having been home to one of the world’s richest gold rivers. Gold mining boomed around Bannockburn (yes, that’s a famous Scottish location too), and while there is no longer commercial mining, you can still try your luck yourself on the nearby rivers. One of the rivers is called the Clutha, which is Scottish Gaelic for the Clyde, the river that also passes through Glasgow, Scotland. Like I said, there are a lot of Scottish place names in New Zealand.

After passing through Cromwell, we began to head north across the 45th parallel, which marks the halfway distance between the Equator & the South Pole, toward the first major stop, Wanaka. The Christmas hat-clad bus driver continued his narration. He was actually pretty funny, and knew a lot about the area despite actually being Irish. His stories were interesting too, as when he’s not shuttling tourists around, he goes on some pretty adventurous hikes & other outdoor activities in the area.

Just before Wanaka, we passed a place called Puzzling World (website). It’s an amusement park filled with mazes, games, illusions, and other mind-bending activities. It looks like a fun place for both kids & grown-ups if you’re visiting the area. 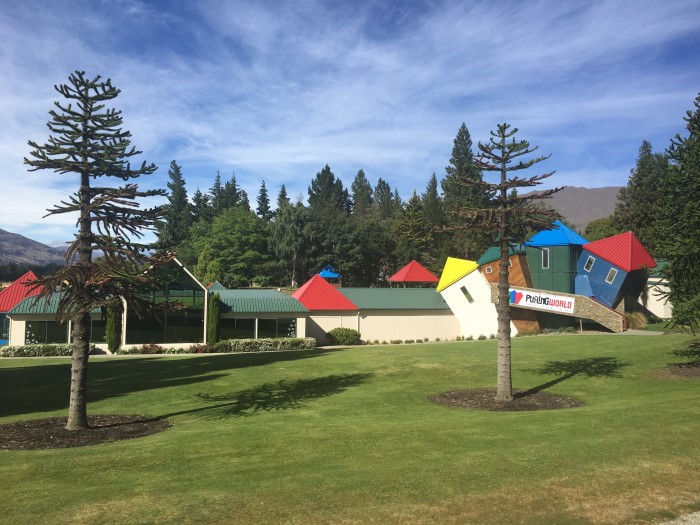 Wanaka is a popular destination, so many of the passengers who had started their journey in Queenstown got off the bus there. I guess not everyone is up for an 8 hour bus ride on Christmas Day. Oh well, it meant that I had nobody next to me for the rest of the day.

This next part of the bus ride was a long stretch described by our driver as his second favorite drive in all of New Zealand after the drive to Milford Sound. It’s easy to see why. We passed by Lake Hawea Dam, and began a journey that would take us past lakes, rivers, waterfalls, forests, and onward up the West Coast. 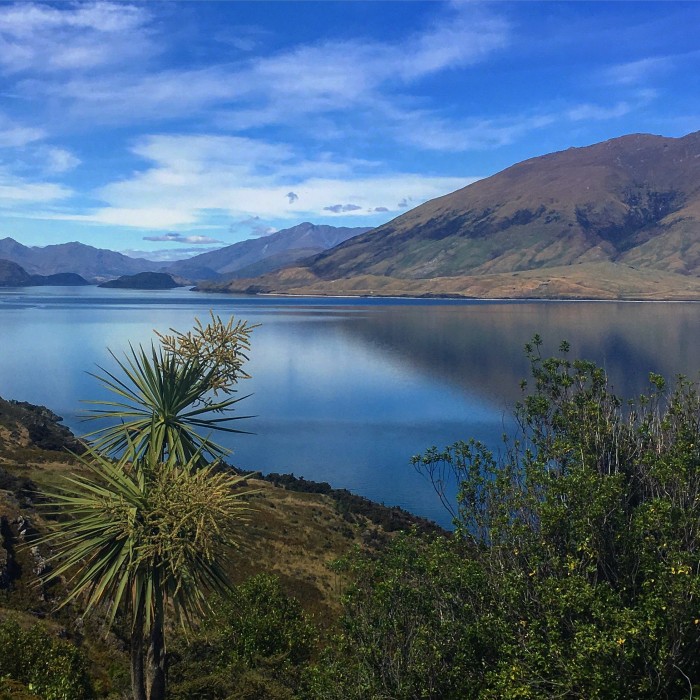 With it being Christmas Day, I didn’t know if any shops or restaurants would be open along the way, so I had brought some snacks from Fergbaker, which I ate as we left Queenstown along with some chocolate milk. I finished the chocolate milk just as the bus driver was saying that cold food was fine on the bus, but hot drinks, hot food, and dairy products were not. Oops.

As it turned out, I didn’t need to bring any food. A few hours into the ride, we stopped at a nice country store and restaurant called the Makarora Country Cafe that had opened briefly just for passing buses. While I’m sure having a few dozen customers makes opening for an hour worth it, the family that runs the place didn’t have to take the time out of their Christmas Day, but it was nice that they did. I had a bacon & egg pie, fries, and a ginger beer. 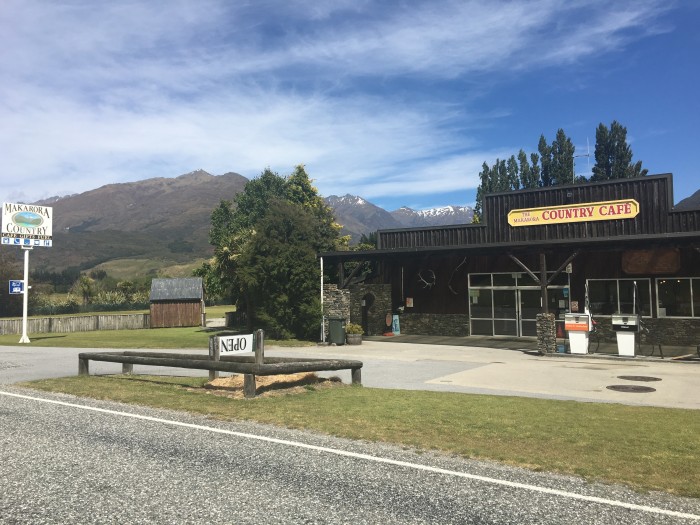 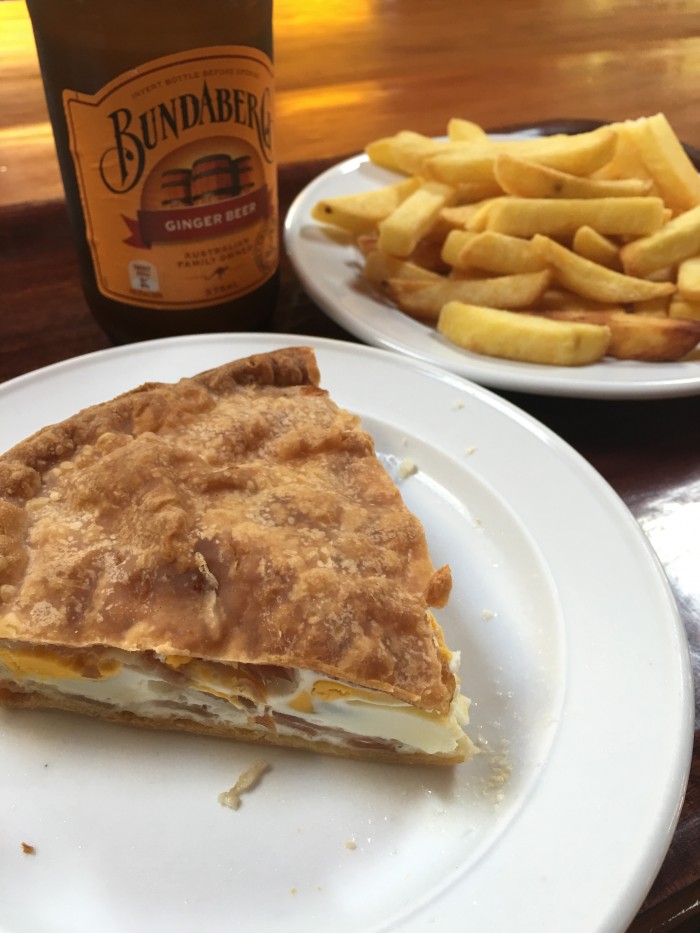 Leaving Makarora and Otago, we entered Westland & Mount Aspiring National Park, which is part of the Te Wahipounamu UNESCO World Heritage Site. This portion of the drive didn’t open until 1963 and wasn’t paved until 1993, that’s how remote & untamed this portion of New Zealand is. 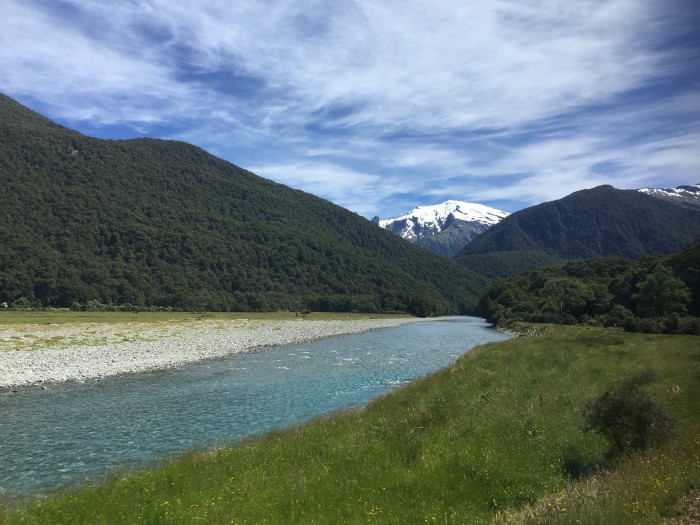 As we headed further into the park, it was easy to see why our driver loves this area so much. The sights were every bit as lovely as those around Milford Sound. 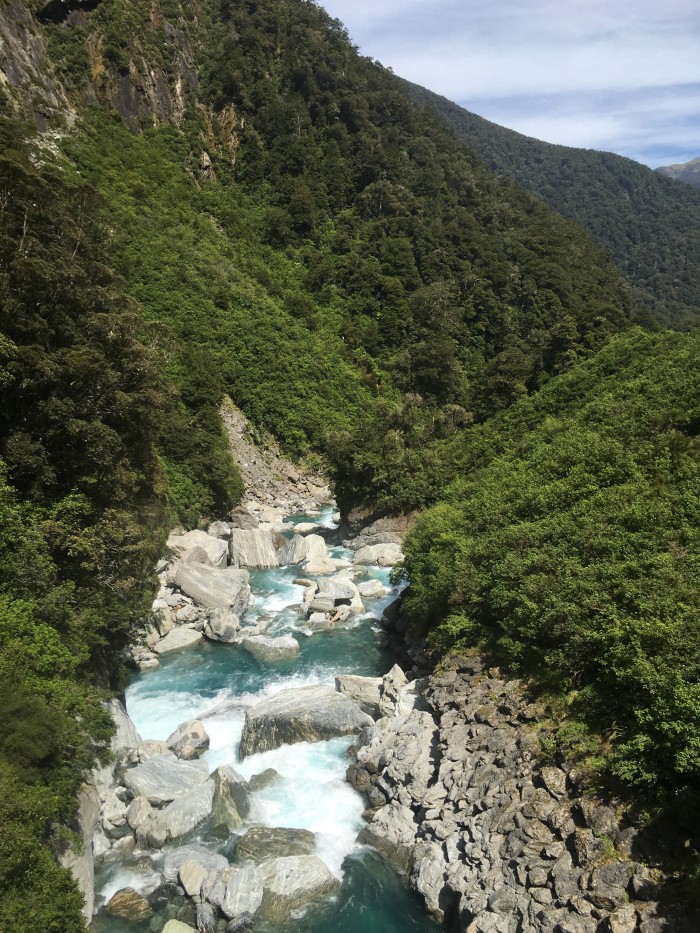 Here is Thunder Creek Falls, one of our stops along the way. 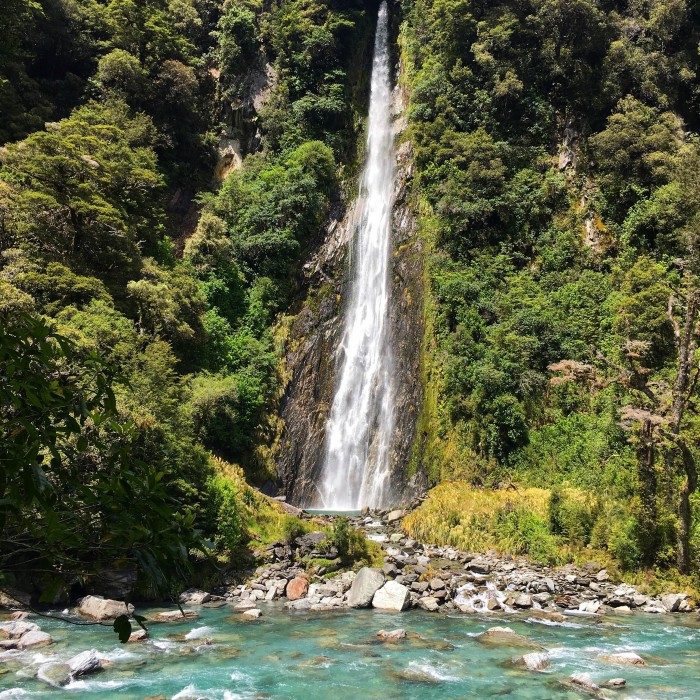 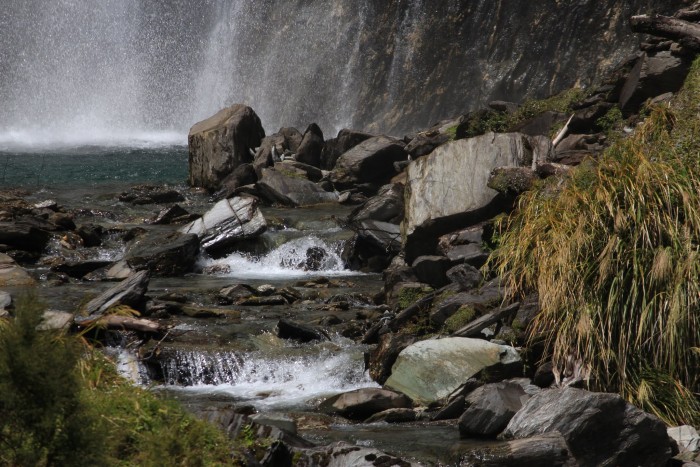 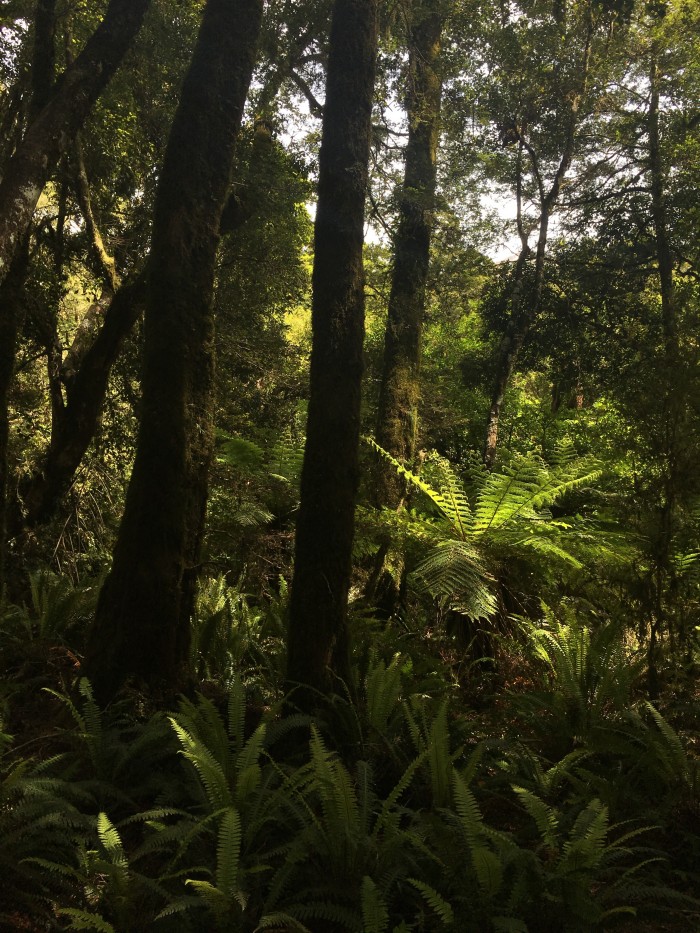 After leaving Mount Aspiring National Park, the river drops down from the mountains and the land suddenly opens up to flat lands near the Pacific Ocean. We had a quick stop in Haast, then drove onward northwest along the coast. 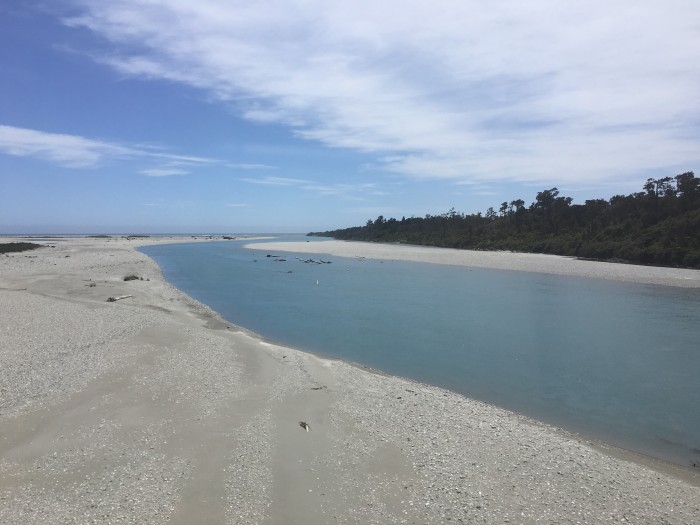 The bus ride from Queenstown to Franz Josef normally has two main stops, the one in Makarora that I mentioned earlier, then another one at a salmon farm & tea rooms. However, thanks to it being Christmas Day, our bus driver knew that the second stop would be closed. Instead, we stopped for 45 minutes at Ship Creek Beach. 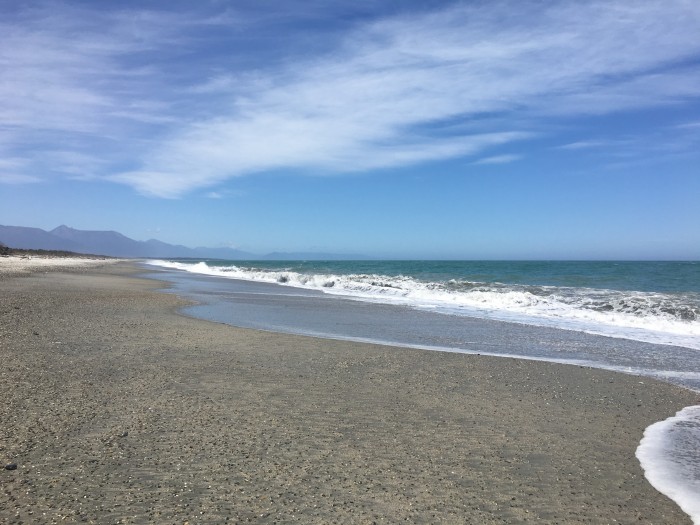 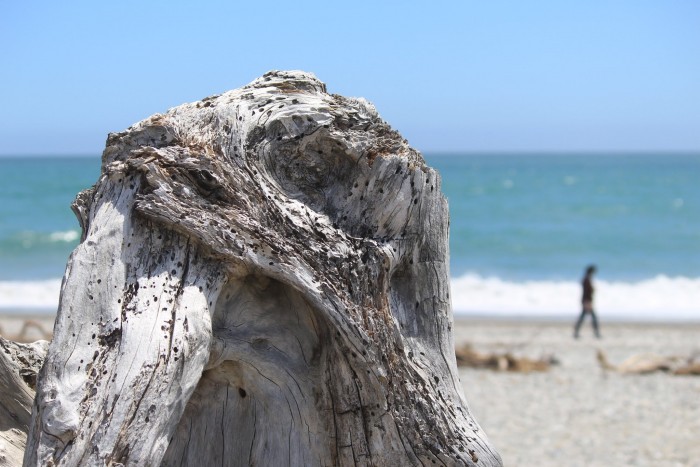 The beach was beautiful, with huge waves, green hills, streams, and piles of tangled driftwood along the shore. 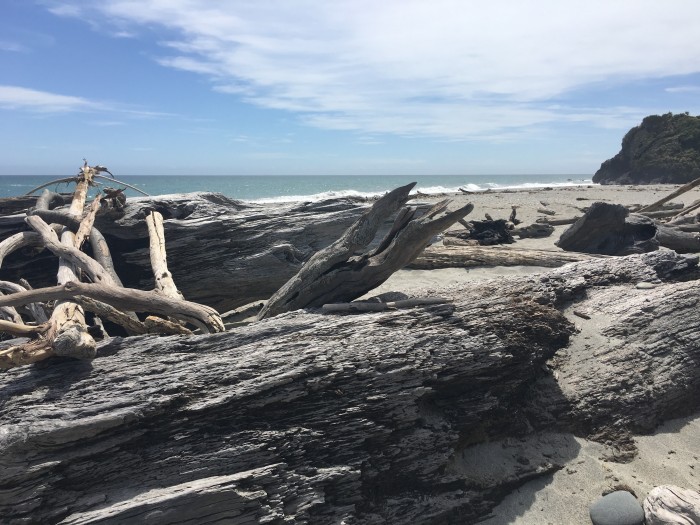 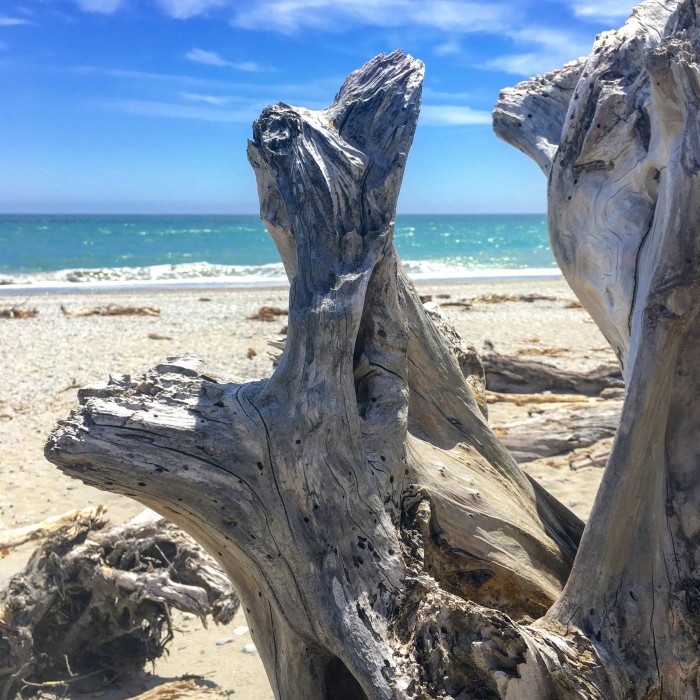 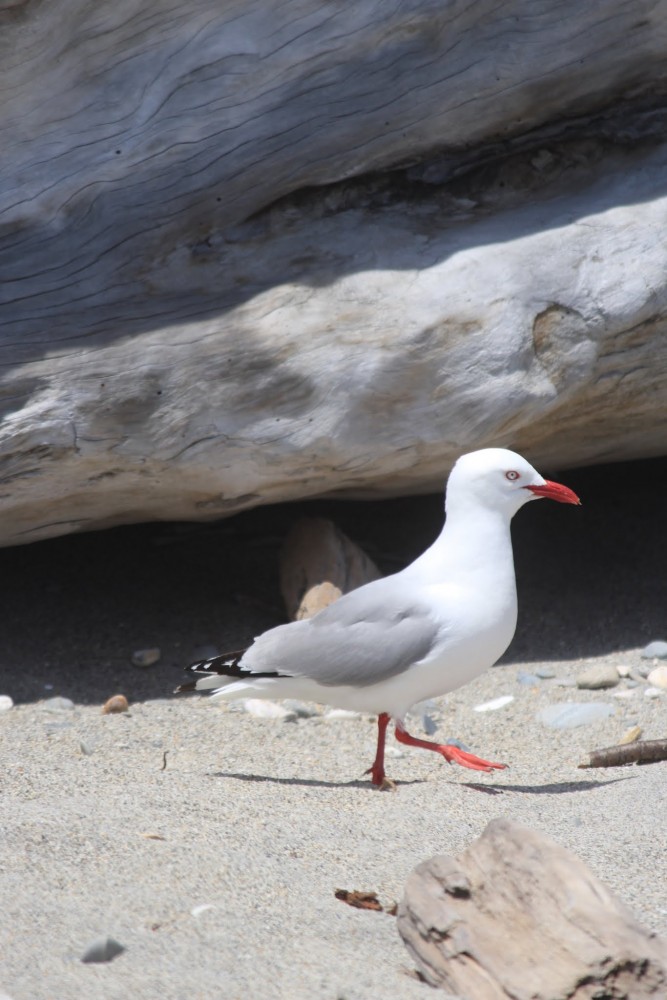 While I am sure the salmon farm is interesting in its own way, I was glad that we had time to relax on the beach while listening to crashing, but peaceful waves disappearing into the mist instead (though I could have done without the biting sandflies that made my legs itch for the next couple of weeks – those bastards are evil, read more about them here). It was exactly the sort of stop you’d make on a road trip if you were driving.

After this last long stop, we continued along the coast. This area of New Zealand has a strong resemblance to California’s central coast. The winding roads & huge cliffs look much like those in Big Sur. I listened to The Island by The Decemberists as we wound our way across single lane bridges as we passed along the ocean’s edge.

Eventually, we turned inland, passing Fox Glacier, and then we were at the final stop in Franz Josef. Franz Josef is a small, tourism-based community near the base of Franz Josef Glacier, which I would have time to visit after checking into my hostel, thanks to the long December days in New Zealand. 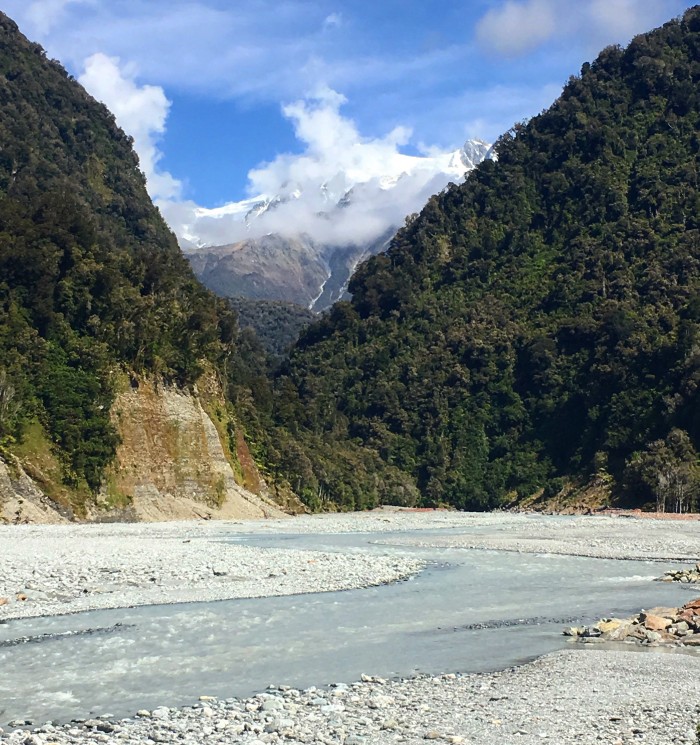 Despite the length of the ride, it never felt interminable, though the bus driver did say that were it not for timed stops, we could have been in Franz Josef an hour earlier. The extra time is more than worth it, however.  There are lots of stops for photos and rest breaks just like you would get on a tour. For it being cheap public transportation and not an actual tour, the Intercity & partner buses make for a great way to get around New Zealand. While you might not have the freedom that renting a car gives, if you don’t have the time, you can let someone else do the driving and still see a lot of the country. Timing my long bus journey for Christmas Day was a great idea, as nothing else would have been open that day. I would pair it with a second long bus ride to Nelson the next day, after spending the rest of the afternoon and evening in glacial Franz Josef.