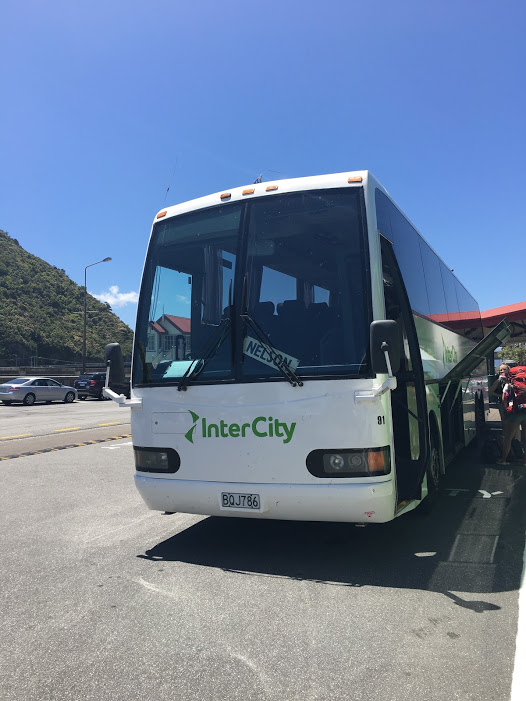 The drive mostly follows New Zealand Highway 6, which turns from the Glacier Highway to the Great Coast Road along the way. I had the same bus driver as my second bus driver the day before, and once again the drive was fully narrated like it was a tour. Although there are a few cities & towns along the way that are fairly industrial, most of the journey is every bit as pretty as the drive from Queenstown to Franz Josef. Yet again, I was fortunate enough to be seeing the landscape on a rare clear, sunny day.

At the start of the day, the bus was about 2/3 full, though I did get a seat to myself for the entire day, which makes traveling 10 hours much more pleasant. The bus window was dirtier than the previous day, so my through-window photos aren’t quite as good. Sorry about that! 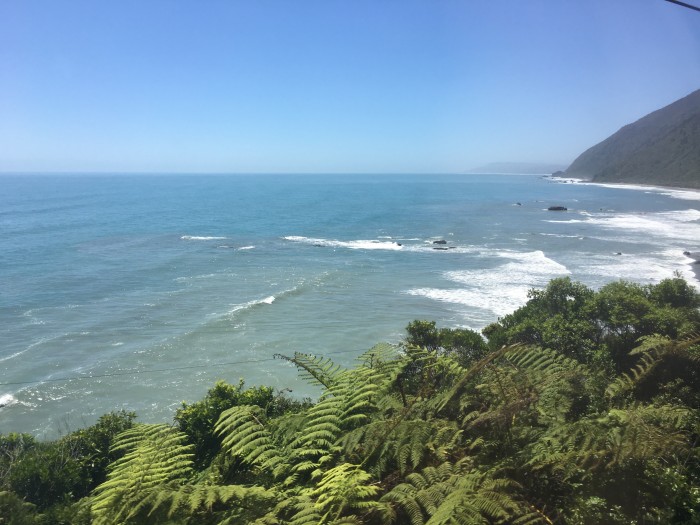 The first leg of our journey was from Franz Josef to Hari Hari, passing by Whataroa, where you can tour the fault line created by the junction of the Indo-Australian & Pacific plates & forms the border of the Southern Alps that mark the spine of New Zealand’s South Island. On the other side of this plate, the land flattens out toward the Pacific Ocean.

In Hari Hari, we stopped for 30 minutes for morning tea in a cute little cafe called the Pukeko Store & Cafe. Everything in the cafe was homemade, so I had an amazing lemon vanilla scone with cream & fresh raspberry jam, plus a piece of chocolate vanilla cake. A healthy breakfast, indeed! 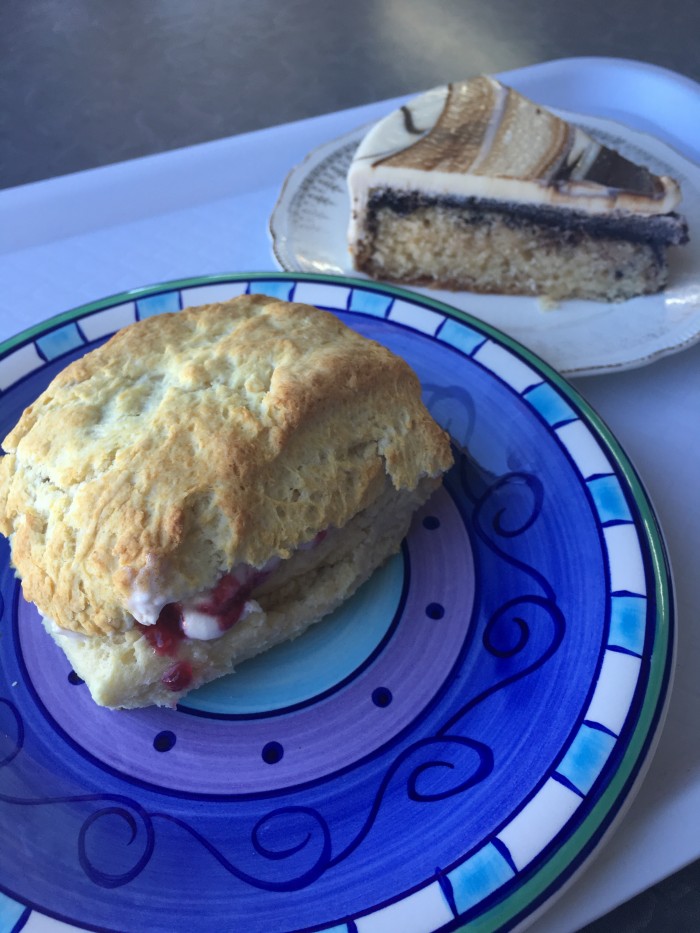 The cafe was also a neighborhood hangout with a message board where I spotted a posting for a 1 bedroom apartment for rent for just $120 NZD per week. Thinking of San Francisco rental prices back home, this made me cry, but I also realized how easy it could be to spend some time in a quiet beautiful place like this. 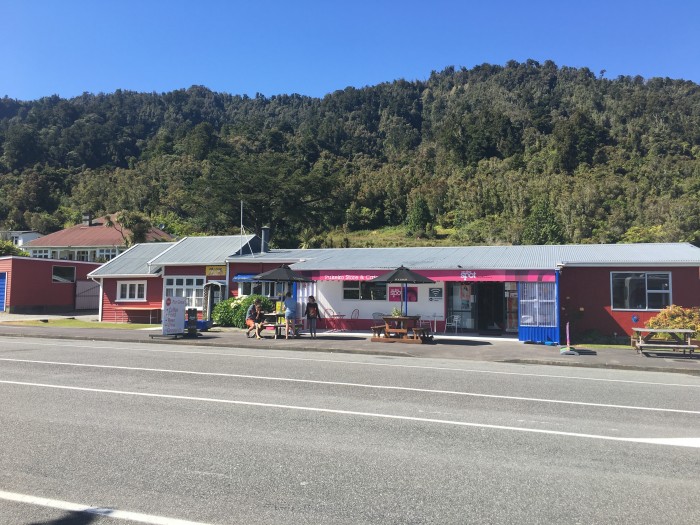 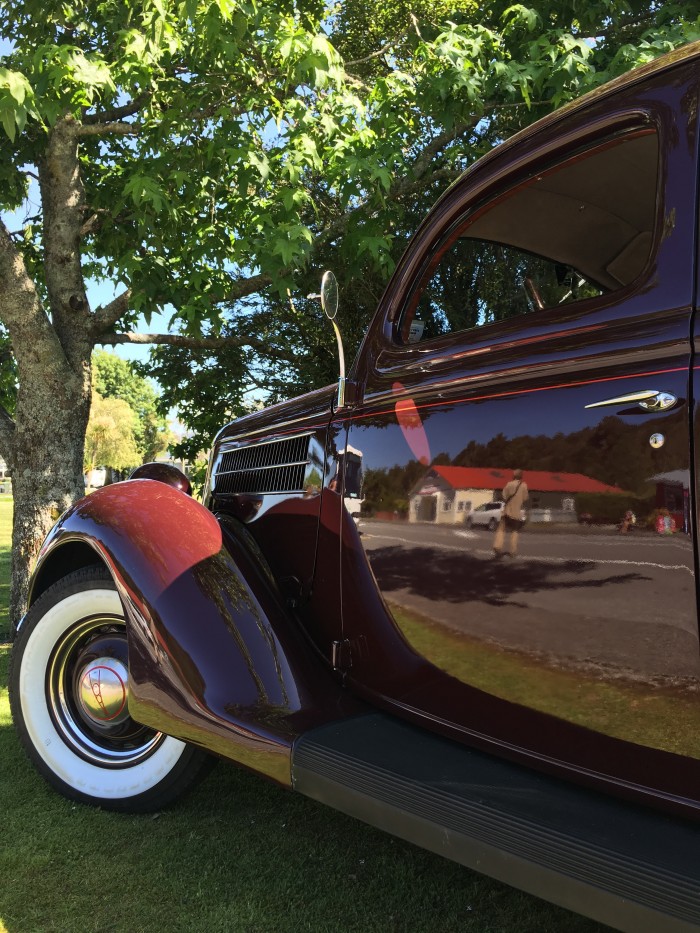 Our next stop was in Hokitika around noon. The town is famous for its jade, so much of the tourist trade is centered around those shops. It’s a fairly large town, and it’s along the beach, so I skipped the stores and headed to the water instead for a bit. 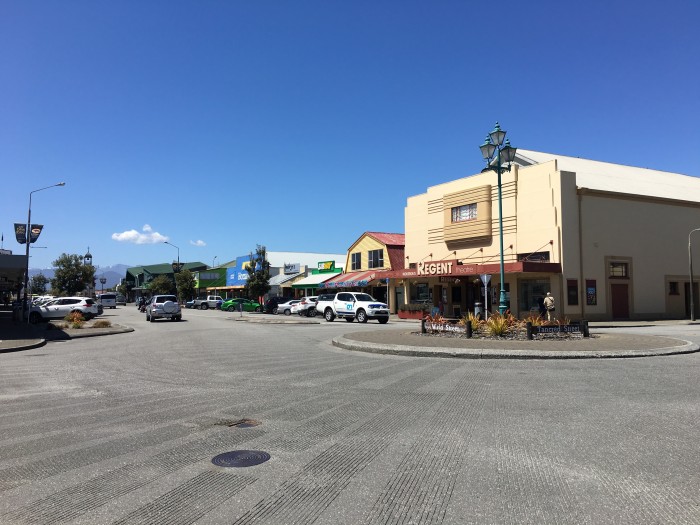 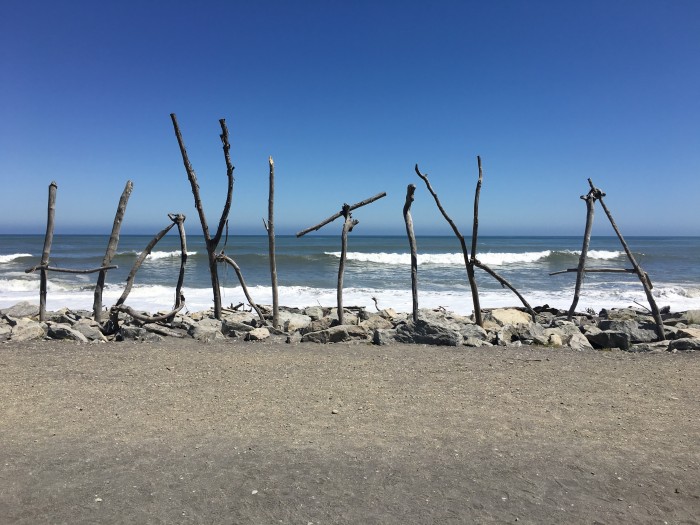 Back on the bus, we had less than an hour ride to Greymouth, the busiest stop of the day. Lots of people got off the bus here because it’s the terminus of the TranzAlpine train to Christchurch. I bet the train journey is gorgeous, so I’ll have to go back to New Zealand to do it someday. Unfortunately, the arriving train was late, so we couldn’t leave until those passengers had joined our bus. This would delay us for the rest of the day, unfortunately shortening later stops. More on that in a moment. I took the opportunity to have a snack & walk around the immediate area for a bit. I saw a little kid almost get hit by a bus. Parents, perhaps a bus station parking lot is not the greatest place to let your kids run around.

I switched to the right side of the bus for more shade, and we were finally along our way again. The next stop in Punakaiki was one of my favorite places in all of New Zealand. Too bad we got only about 20 minutes there thanks to the previous delay, instead of the normal 35, according to the bus driver.

Punakaiki is home to Paparoa National Park and the Pancake Rocks & Blowholes, a natural wonder unlike anywhere else I have seen on earth. The rock formations indeed look like pancakes, and the cutouts in the cliffs create places for the ocean to burst above them. 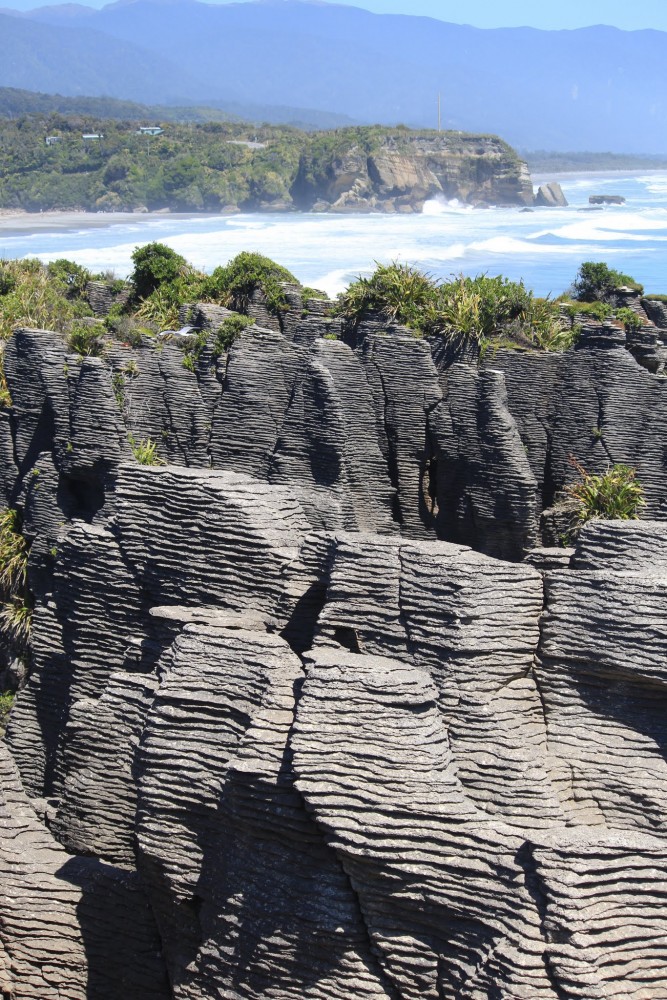 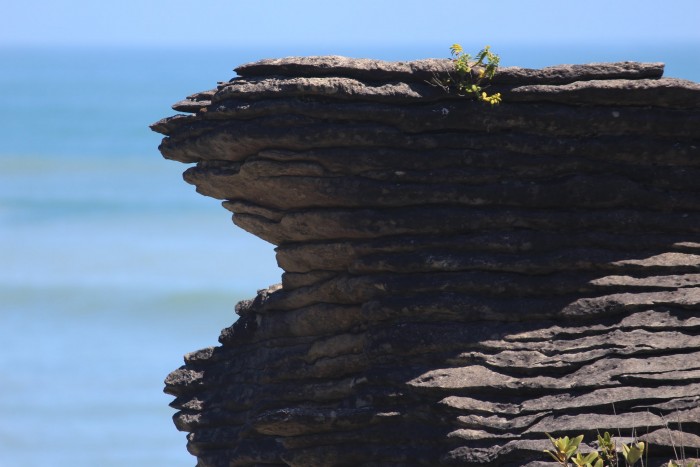 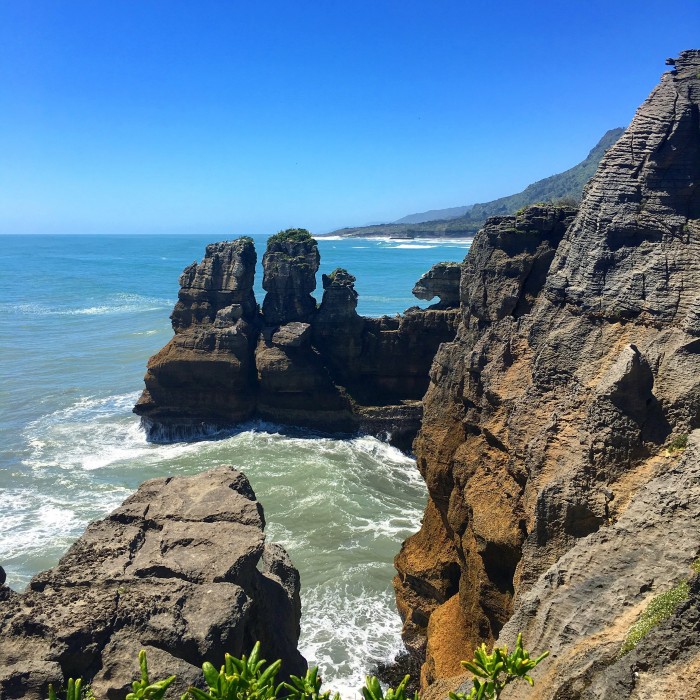 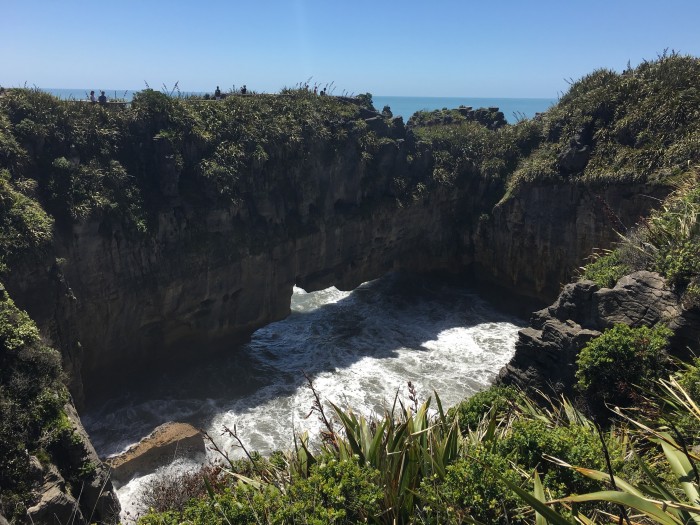 This video I shot shows it off a bit. Once again, it was a perfect day, with blue skies & sunshine stretching across the Pacific.

I had just enough time to do the loop walk around the Pancake Rocks & Blowholes, take some photos while taking in the beauty of the coast here, and then rush back to the bus, where I was one of the last people back on. I can’t blame the bus company for the break being shorter than expected, but it’s unfortunate that a simple train couldn’t run on time, and thus impacted everyone else. That said, while it wasn’t enough time to properly enjoy the Pancake Rocks, even another 15 minutes wouldn’t have done them justice. This was one of the times on my two day bus journey where I really wished I’d had the freedom to stay longer. 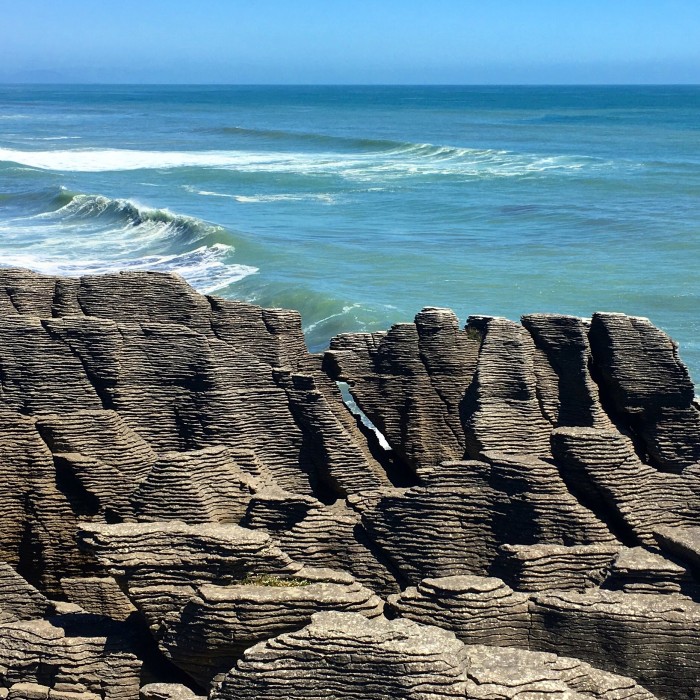 Moving along, we passed the Tauranga Bay seal colony, then onward to the industrial town of Westport around 4pm.

We had one last scenic stretch of the road before getting to Nelson. This final leg of the bus ride passes through the 90km long Buller Gorge. 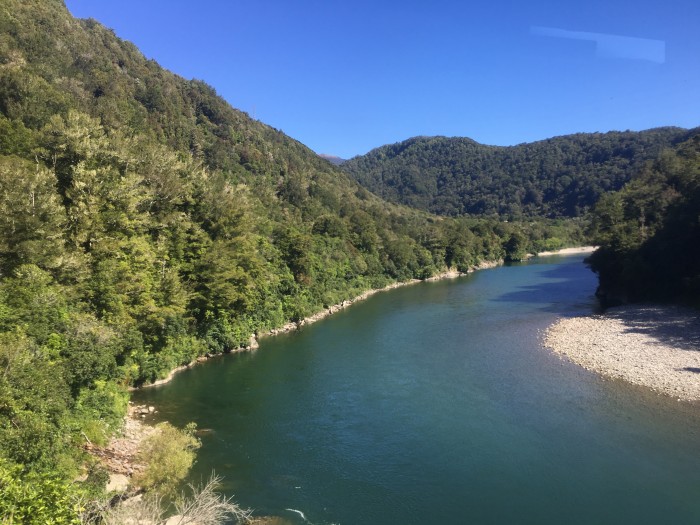 It’s a pretty canyon, and at one point at Hawks Crag, the road is carved into the cliffs as the gorge reaches a narrow point. This area is known for floods, as there’s nowhere else for the water to go during times of heavy rain. The video below shows just how high the water can get.

After passing through Buller Gorge, we took one last stop at Murchison for about 20 minutes. The Beechwoods Cafe there looked decent, though it was too short of a break to eat.

Finally, after a very long bus ride, we were in Nelson. The approach to the city featured the first extended road with more than one lane in each direction that I had traveled on in New Zealand. Aside from the ride from Wellington to Auckland, I was going to be in cities for the rest of the trip, leaving the remote South Island landscapes behind.