Thanks to the flight schedules, I had about 24 hours to kill around Cancun, Mexico before flying onward to Cuba. I’m not a beach resort sort of person, so rather than staying in Cancun, I opted to drive south to Tulum for 24 hours so I could see the Mayan ruins there.

How to get from Cancun to Tulum

Renting a car was easy. I chose to go with National Car Rental, which was hassle-free. While the quoted price had been higher than other car rental agencies, the car rental included all fees, as well as the limited insurance that I have heard is mandatory while renting there. Nobody tried to upsell me, and the entire experience was great, from the shuttle to their nearby location, to the staff bringing me into a room with great air conditioning and handing me a cold bottle of water upon arrival. When I did my customary walkaround inspection of the car, the guy who was with me even pointed out a few scratches and tiny dents. I do have status with National, but it seemed like they were nice to everyone. I highly recommend their Cancun location. 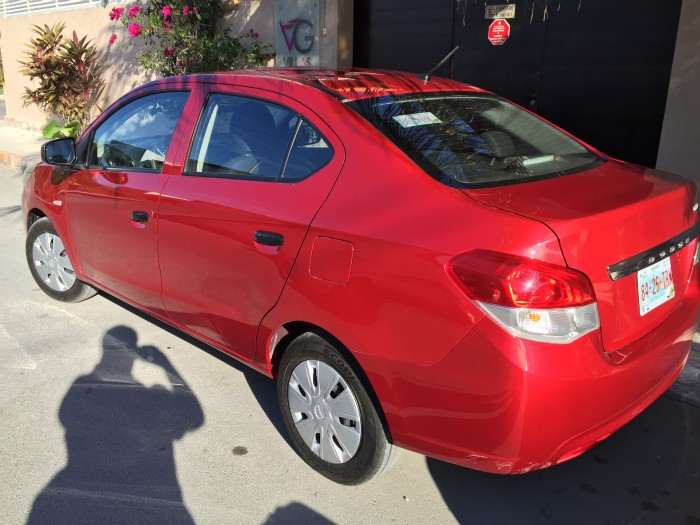 My rental car from National I had no issues with it, and the experience was great

After getting my car, I set off on the drive to Tulum. It takes about an hour and 45 minutes to make the journey down Mexico 307.

This was my first time driving in a foreign country, and it was pretty uneventful aside from a few quirks. I’ve never encountered police checkpoints before, but those were no issue. I just slowed down and passed through like everyone else. Another unique aspect of Mexican roads is the varied speed bumps on major roads. Sometimes the speed bumps would be very high and very short, while other times they would be very high and over a larger distance. Other times they’d be more hidden, but I had no issues with surprises.

I was, however, surprised by a couple of stretches of road where there were zero lane markers. Everyone seemed to do a good job of avoiding each other, but it was a bit unnerving. Because of this, as well as the general lack of lights, I would not recommend driving around this area at night.

My drive to Tulum was uneventful, and I had no problems finding my hotel in old Tulum. I stayed at the Villas Geminis Boutique Condos. For a full review of it, click here.

I relaxed in my hotel for a bit, then I headed out in the evening. I walked around the main drag of old Tulum for a while, then I stopped at a highly-rated restaurant for dinner. 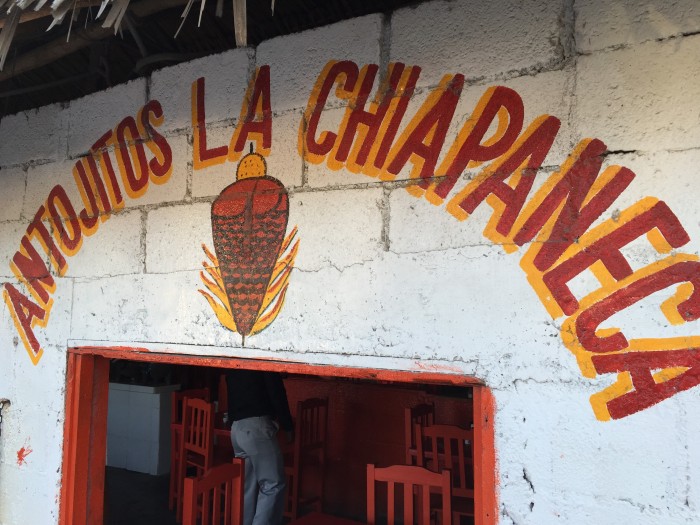 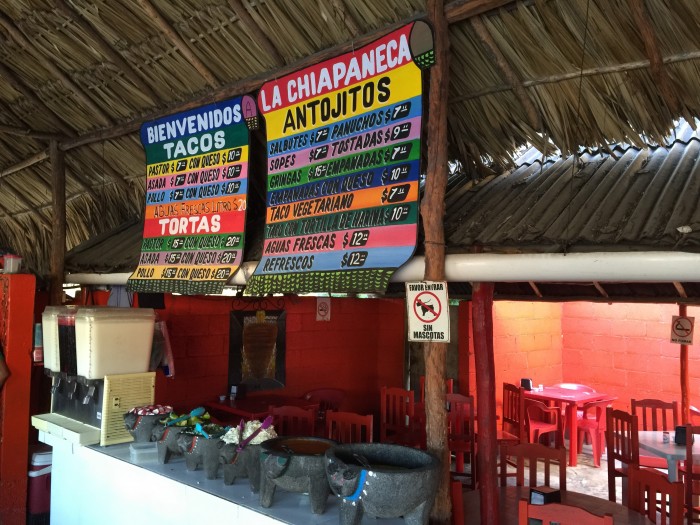 Three tacos for 30 pesos (under $2) at Antojitos la Chiapaneca in Tulum, Mexico

After five excellent tacos for the equivalent of only a few dollars, I got some ice cream, then headed back to my hotel room to relax, as I had a long day ahead of me.

Visiting the Mayan ruins in Tulum

I woke up early, had breakfast at the hotel, then drove to the reason why I had gone to Tulum for 24 hours: the famous Mayan ruins.

Most visitors to Tulum do so from Cancun and the other major tourist resorts. As a result, the tour buses arrive after having completed the 1-2 hour drive. The ruins open at 8am, so if you get there close to the opening time, you can beat a lot of the crowds.

I arrived at Tulum, and there were only a couple of cars in the parking lot. A fair amount of people were walking or biking in from elsewhere. I then had to join them and walk about half a mile past the tourist shops to the actual ruins. It was hot. It was humid. None of this is unexpected for August in the Yucatan Peninsula, so I just had to deal with it. I was covered in sunscreen, and I was wearing a ridiculous hat. No, I do not have a photo. What I had neglected to do was use the mosquito repellent wipes that I had brought with me. I don’t know when it happened, if it was during the evening before in Tulum, or if it was at the Tulum ruins, but at some point I was served as a mosquito buffet. It took me a day to realize this, and I then spent the rest of my trip scratching my uncovered legs. I never saw my assailants. Bring (and use!) something to deal with mosquitos if you go to the area.

The Tulum ruins are impressive. There are several smaller buildings on the site, along with a couple of main ones. 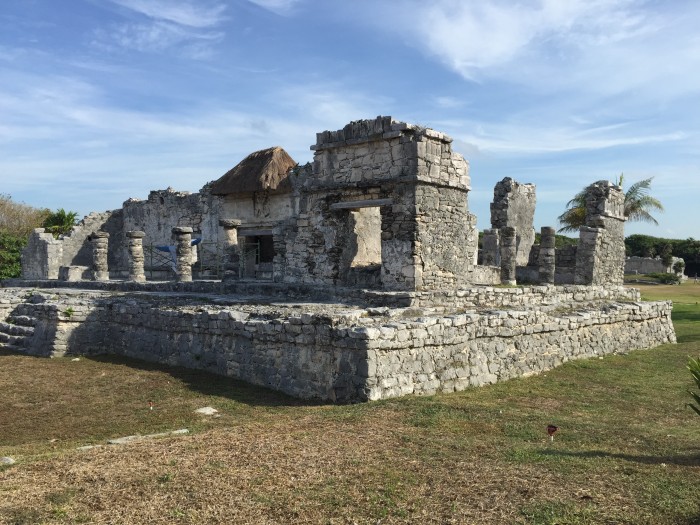 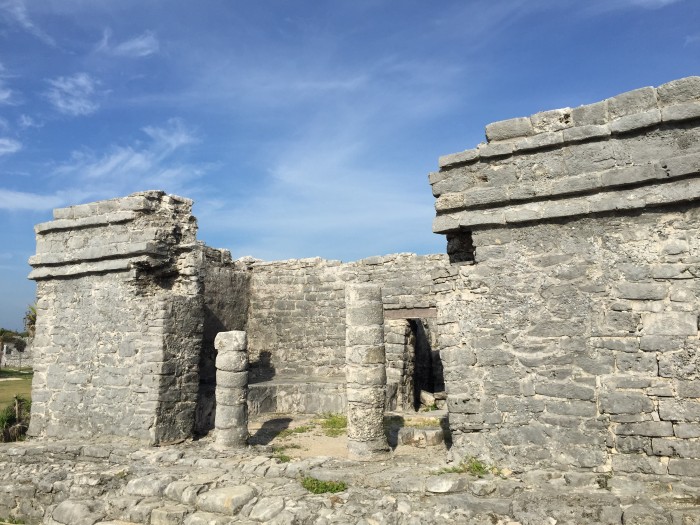 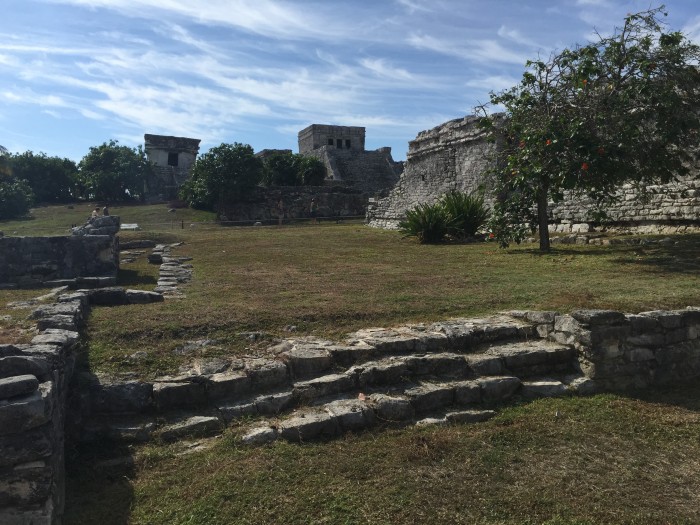 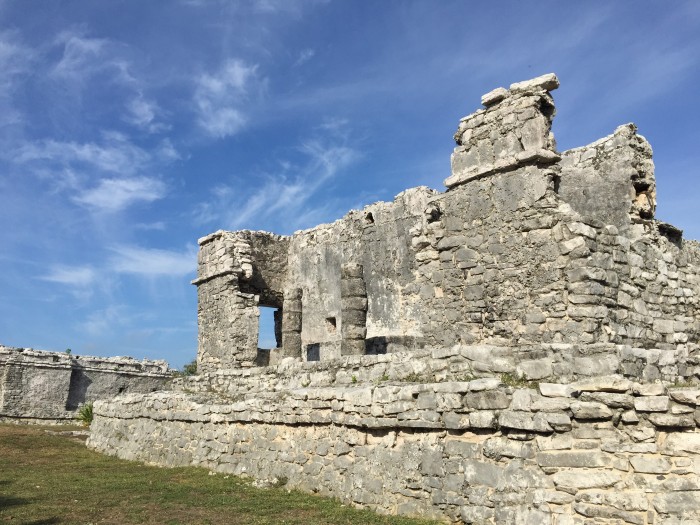 The largest and most impressive building is called El Castillo. 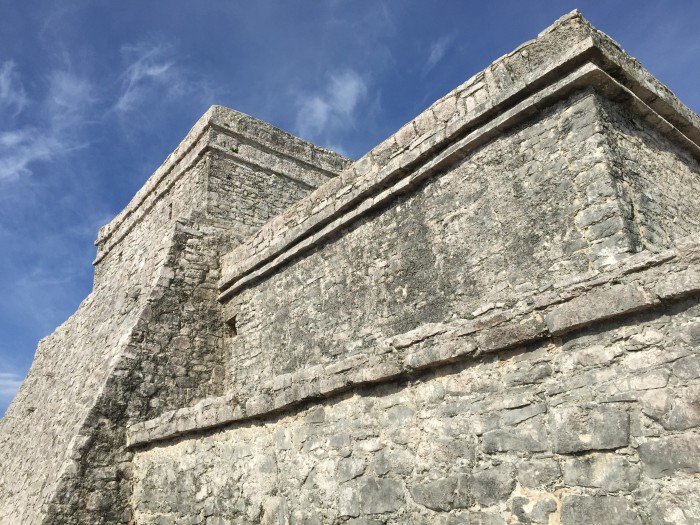 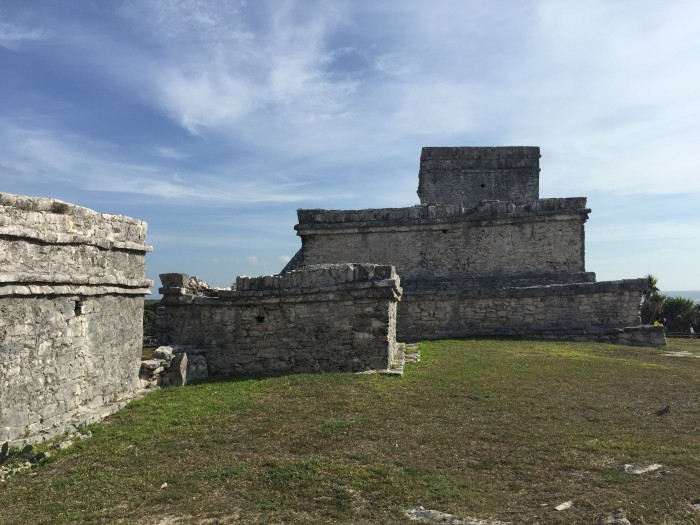 The most dramatic aspect of the ruins is that a few of them are perched upon cliffs overlooking the sea. This is the God of Winds Temple. 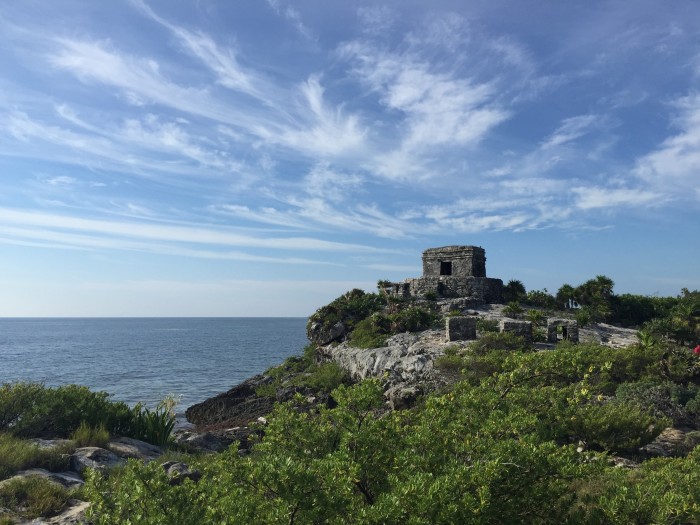 Gorgeous. It’s not surprising that most visitors immediately flock to these views. Other areas of the Tulum site are a bit less crowded.

In fact, as I ventured toward the southern part of the grounds, I found myself as the only person nearby. I was not the only living creature though, as the iguanas that I had seen once or twice on walls and buildings were now everywhere.

Tulum is filled with tiny dinosaurs

Be careful as you walk around the Mayan ruins at Tulum. The iguanas blend in with the ground, and they’re only marginally afraid of humans. As a result, it would be very easy to step on one of them. This would probably ruin your trip as much as it would ruin the iguana’s life. So I don’t recommend this. 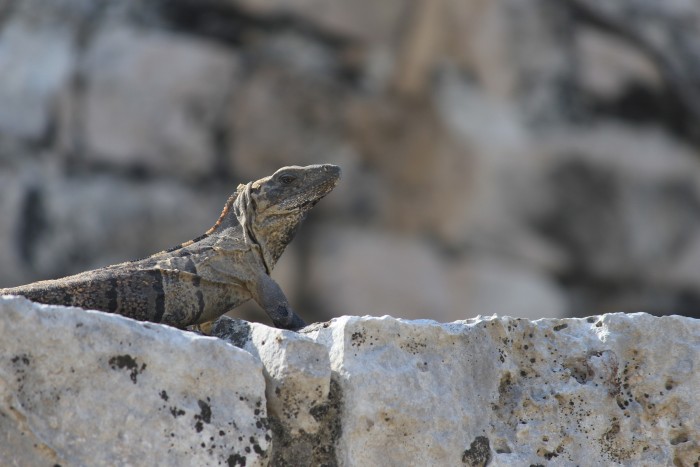 They look like tiny little dinosaurs, which met their demise thanks to an asteroid landing near the Yucatan Peninsula just a couple of hundred miles from here.

As crowded as the ruins can get, it’s in the areas like this that you can sense the peacefulness. Whatever these structures were created for, the importance of their view over the sea is clear. 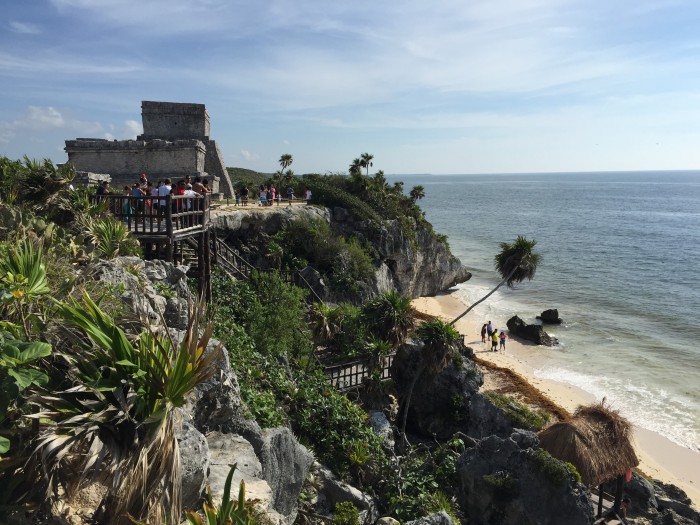 After two hours in the sun, sweat was pouring off of me. I still had to make the drive back to Cancun before my flight, and I wanted to leave plenty of time in case anything went wrong.

Nothing did go wrong, though I did get pulled aside at one of the police checkpoints. I had no idea what they wanted since they weren’t saying much, so I unintentionally may have convinced them that I was some lost idiot on the way to the airport, and they let me go. Is this the appropriate way to handle a police checkpoint in Mexico? I can’t give that advice, but it worked for me.

I returned my rental car, then went back to the Cancun airport, having completed everything I’d set out to do during my 24 hour layover in Tulum.