How to get to Yamazaki Distillery

Yamazaki Distillery is located in Shimamoto, Japan, between Osaka & Kyoto. It can be reached by train from either Osaka or Kyoto by taking the Tokaido-Sanyo Line to Yamazaki Station or the Hankyu-Kyoto Line to Ōyamazaki Station. I traveled using the Kansai Thru Pass, since I was also going to see cherry blossoms in Kyoto afterward.

From either train station, it’s about a 10 minute walk to Yamazaki Distillery. It’s a pleasant neighborhood walk, though take note to leave yourself a bit of extra time, as the route does cross train tracks. I had to wait for three trains to pass before I was finally able to make my way to the distillery.

The distillery is easy to spot, as it’s a huge facility. There’s a nice little garden out front, with flowers & a few cherry trees to set the mood. 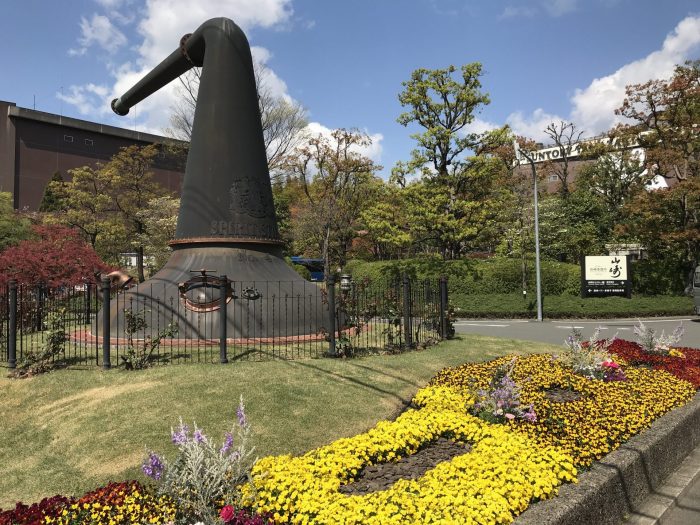 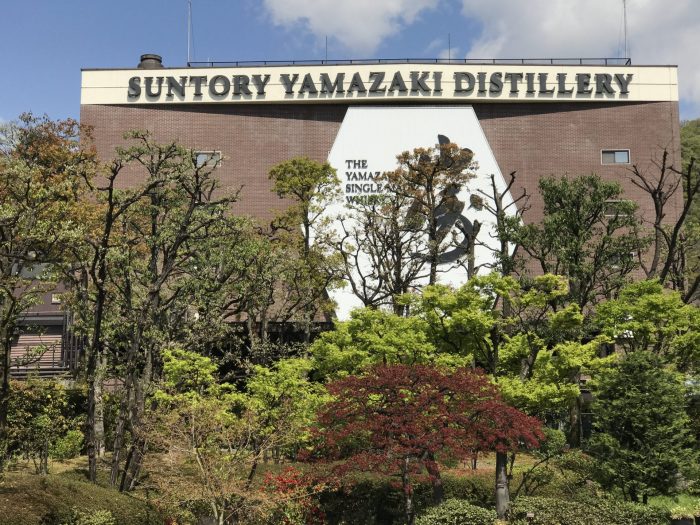 Yamazaki Distillery opened in 1923. Founded by Shinjiro Torii and Masataka Taketsuru (who later opened Hokkaido’s Nikka Distillery), it was the first commercial whisky distillery in Japan. Nowadays, it’s owned by Suntory. Note that as in Scotland, the water of life is spelled as “whisky” not “whiskey” in Japan.

Despite Yamazaki & the Japanese whisky distilling industry’s comparatively young history, they are upstarts analogous to what the Napa region of California is to wine – overlooked until they started winning major international awards.

Following all of these awards, Yamazaki whisky became so popular that it’s now difficult to find. It will take years before production is able to catch up with demand. But if you’re in Japan, you can visit Yamazaki Distillery for a tour & a tasting. 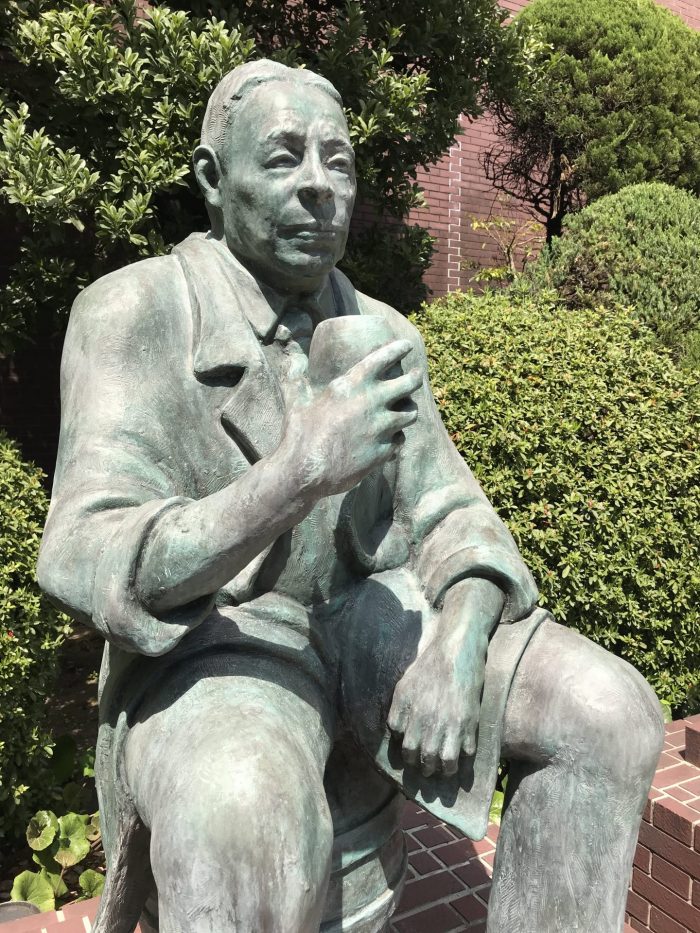 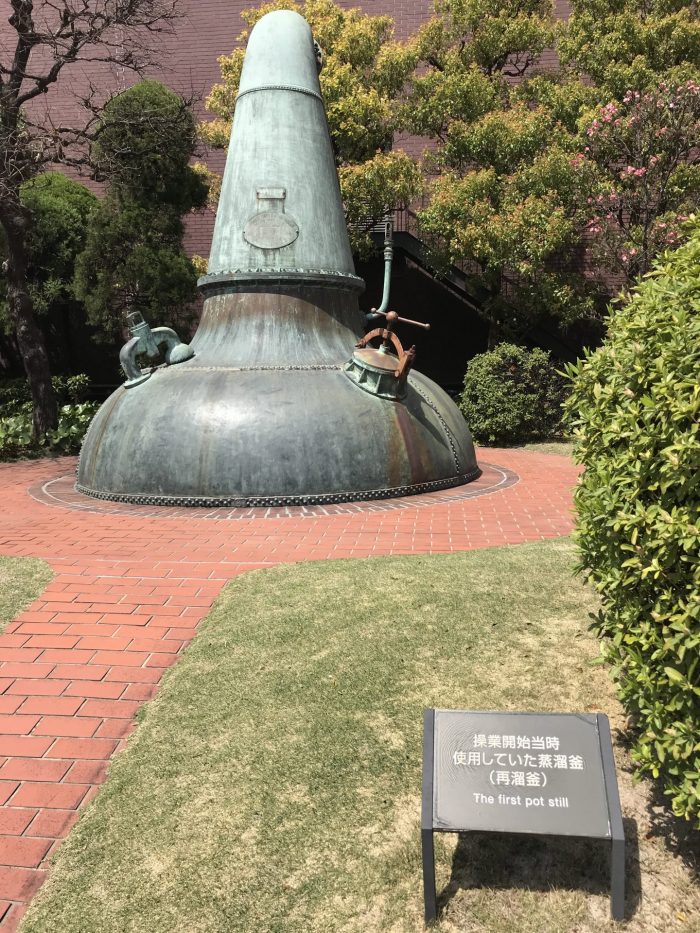 When I visited the Yamazaki Distillery, there were three different tour levels. First, there is the ability to do a free visit. While this doesn’t include a guided tour of the actual distillery, you can still see part of the grounds, the Whisky Museum, the gift shop, and the public tasting room. If you aren’t able to find availability for one of the other Yamazaki Distillery tours, this is still a good option if you want to visit. 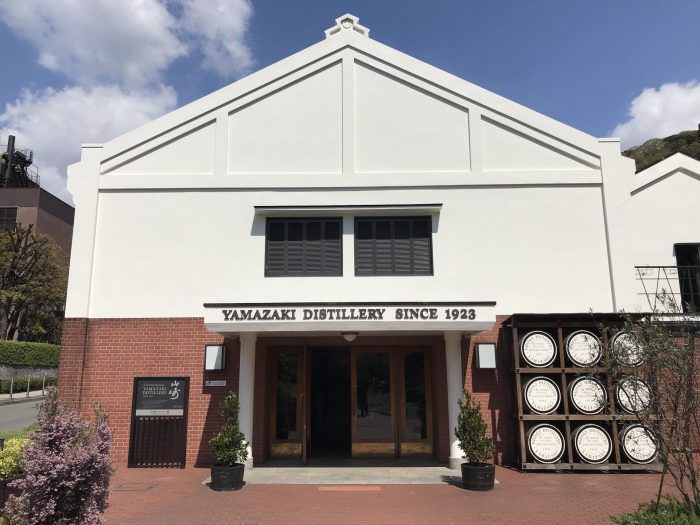 The tour includes an audioguide that you can download to your phone, so you don’t necessarily have to take a tour in your language. My tour was in Japanese, though the tour guide did speak a bit of English.

Be sure to book ahead if you want to tour the Yamazaki Distillery. When I looked into booking, the regular tours were booked up for nearly two months, but I got lucky and there happened to be one spot open a couple of days later.

The Yamazaki Distillery tour starts in the Whisky Museum & Library, which is also open to those who don’t have tour tickets. The museum is housed in the former Yamazaki bottling plant. Since this part of the visit is self-paced, I recommend getting there a bit early so you can see it before the tour. The tour lasts about 75 minutes, including the tasting. 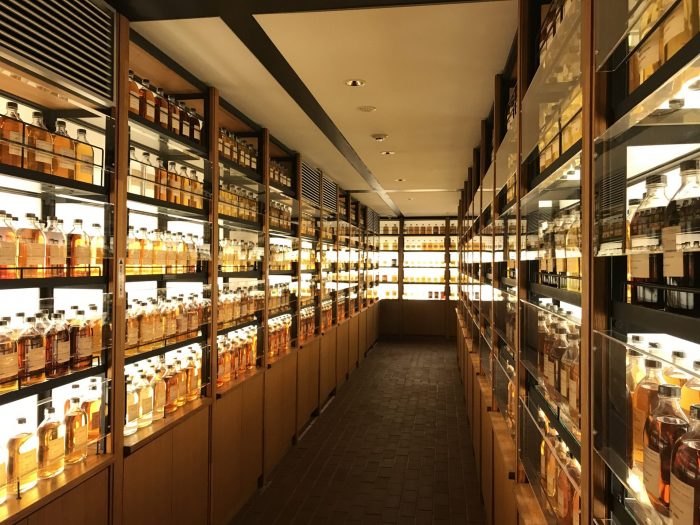 The tour itself begins with a visit to the distillery. If you’ve been to any whiskey distillery, you can probably guess that the tour starts with an overview of the distillation process, and you’d be correct. This nice site shows the factors that influence each bottle of Yamazaki.

As with wine, whisky is also impacted by the local climate & resources. The high-quality water used to make the whisky comes from local springs. Yamazaki is situated in a foggy area, which also helps with maturation. This river valley is actually formed by the meeting of three rivers, with the Katsura, Uji, and Kizu meeting to become the Yodo before it flows to Osaka.

After the short overview, the next stop is the fermentation room. The smell from the massive mash tun in this room is amazing. The whisky here is only just beginning its journey. It will be years before anyone gets to properly enjoy it. 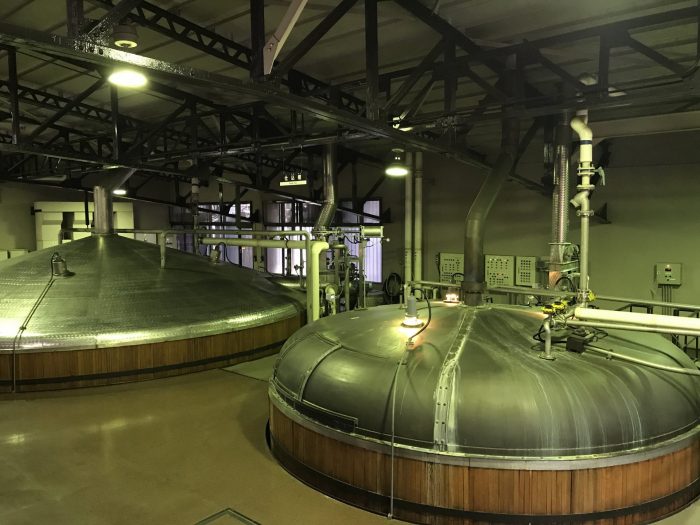 Next, the tour goes to the still house, followed by the warehouse. 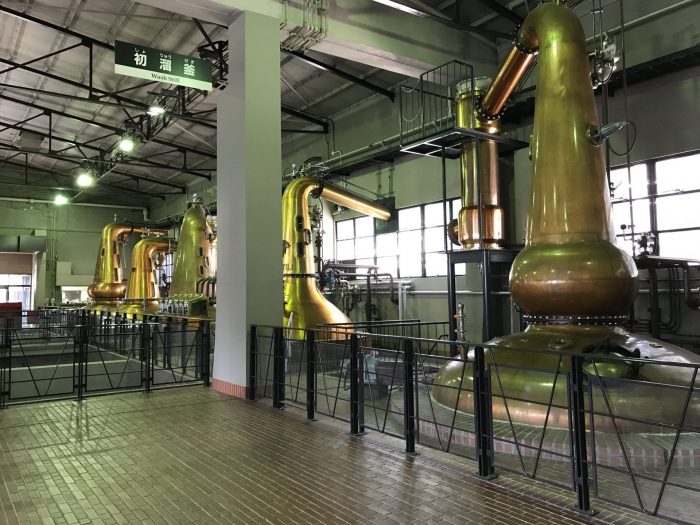 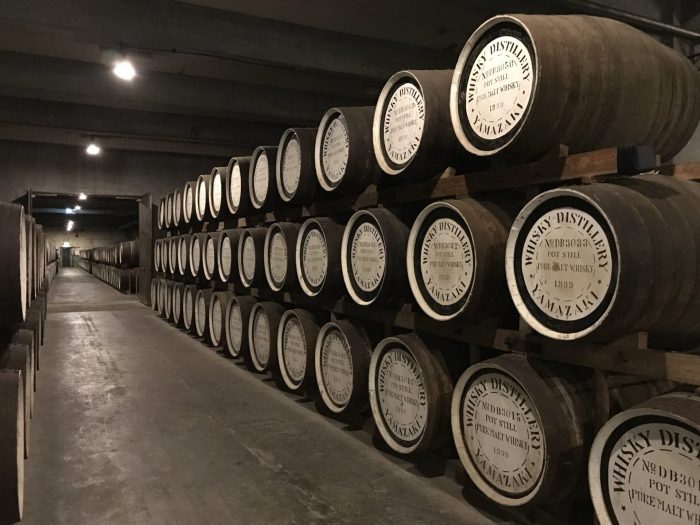 In case you think you’ve been transported to Scotland, you’ll be reminded that you’re in Japan as you exit to this gorgeous garden with a pond and cherry trees. 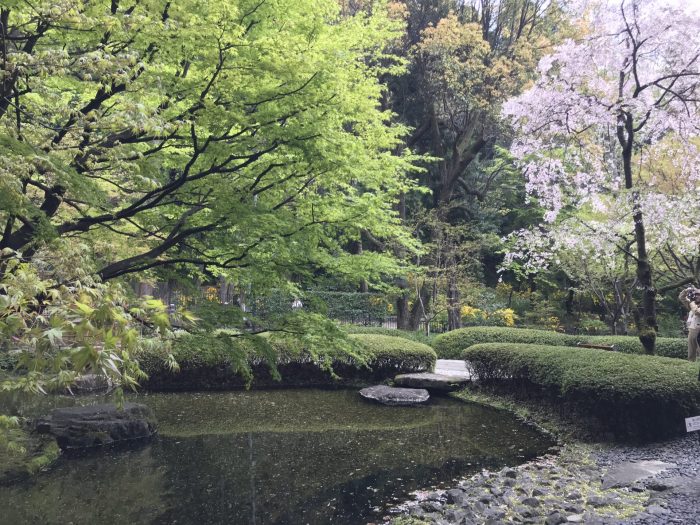 The second part of the Yamazaki Distillery tour is the private tasting room. Here each guest gets four different tastes of whisky, each showcasing a different aspect of Yamazaki. There are also snacks. 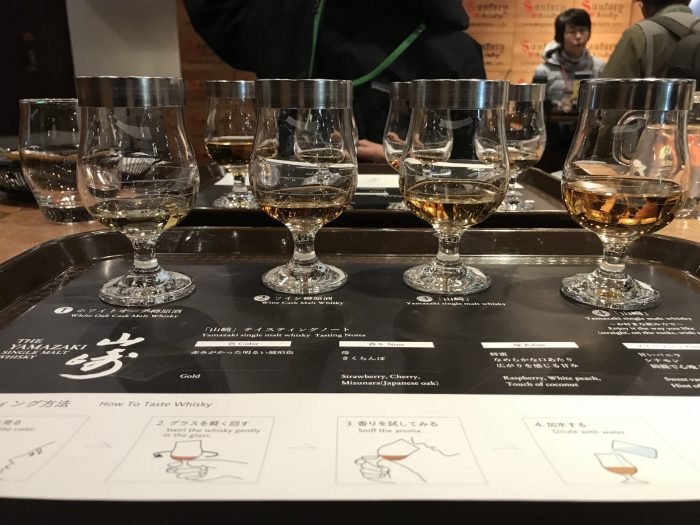 The first taste is white oak cask malt whisky. The second is a wine cask malt whisky. By offering the tasting in this manner, Yamazaki can demonstrate how each component contributes to the eventual blending of casks. The third taste is of Yamazaki single malt whisky. Here you’ll get to try the final product.

Finally, a larger pour of Yamazaki is for your choice of enjoyment. You can drink it neat, on the rocks, or with soda as a highball. Wanting to try something different, I opted for the classic Japanese highball. Gotta stay hydrated. 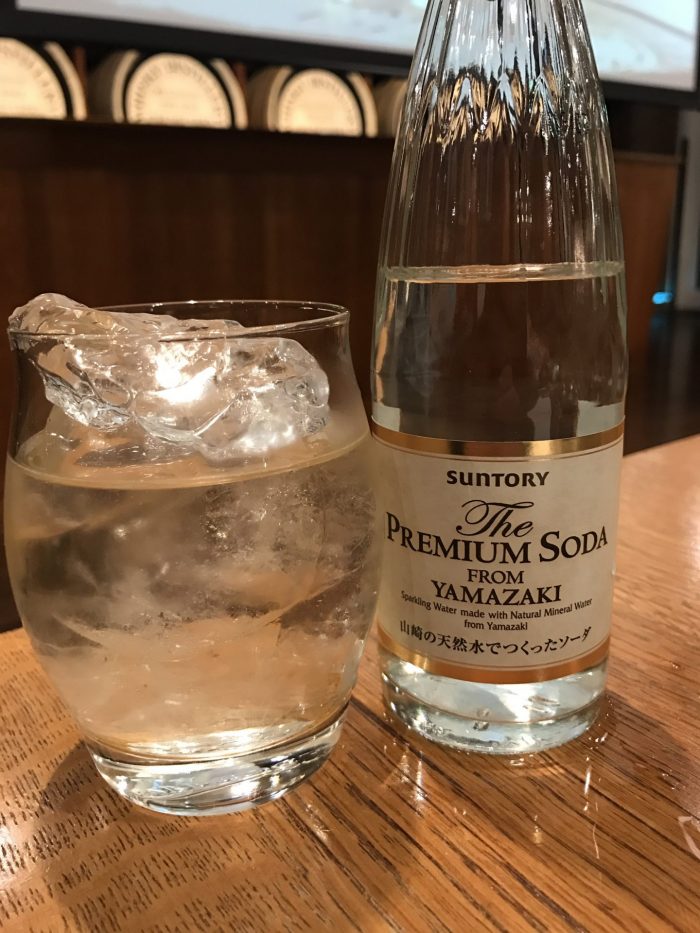 After completing this tasting, the tour is over. It’s then time to head to the gift shop. Inside the gift shop, there are branded items, whisky, plus snacks smoked using whisky cask chips. I had to get the smoked bacon & smoked salmon snacks, since they sounded (and were) amazing.

One note is that while there was whisky for sale, there was no Yamazaki – only other Suntory brands. Apparently only a small number of bottles of Yamazaki Distiller’s Reserve are available for sale at the distillery each day. My only regret of the day was that I didn’t go to the gift shop immediately arriving at Yamazaki, so I missed out on being able to purchase a bottle. Oh well, it’s a good excuse to go back again someday.

Then it was time to check out the public tasting room, which again you can visit without a tour ticket. There’s a wide selection of Yamazaki & other Suntory whiskies here, including Hibiki. Some of the whiskies are limited to one taste per person, but otherwise you’re free to enjoy these rare offerings you’ve likely had difficulty finding elsewhere, along with whiskies that are only available at the distillery. 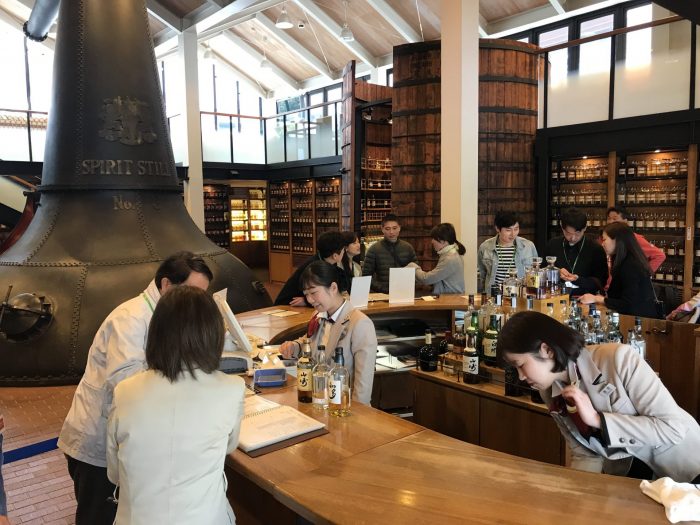 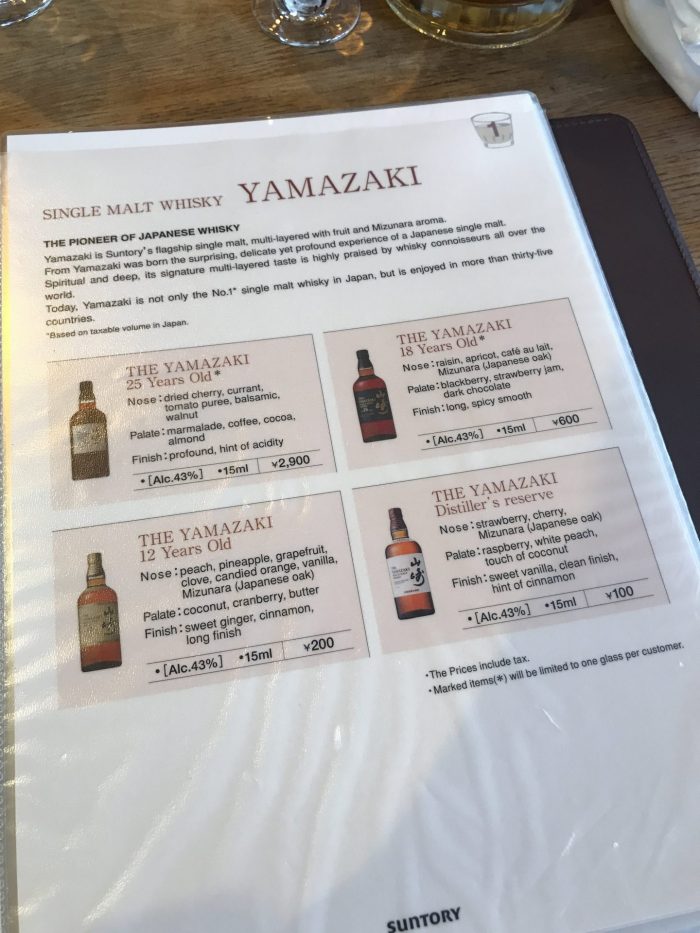 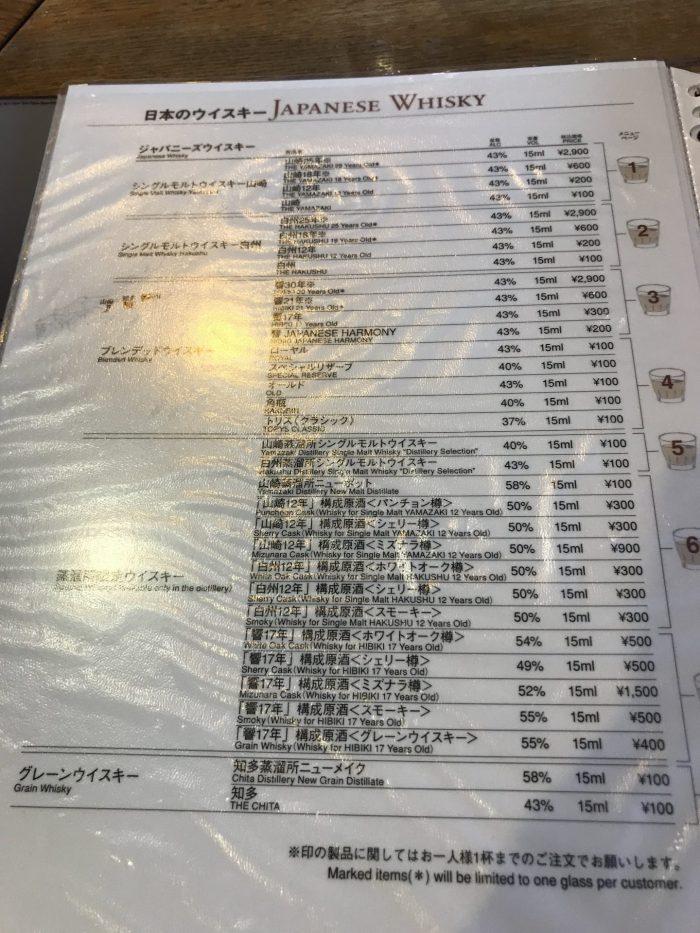 My first taste was the coveted Yamazaki 18. I then followed that with a Yamazaki Sherry Cask. This whisky was in an unlabeled bottle, so I’m guessing that for whatever reason it wasn’t quite what would normally be sold or they just don’t bother bottling it? 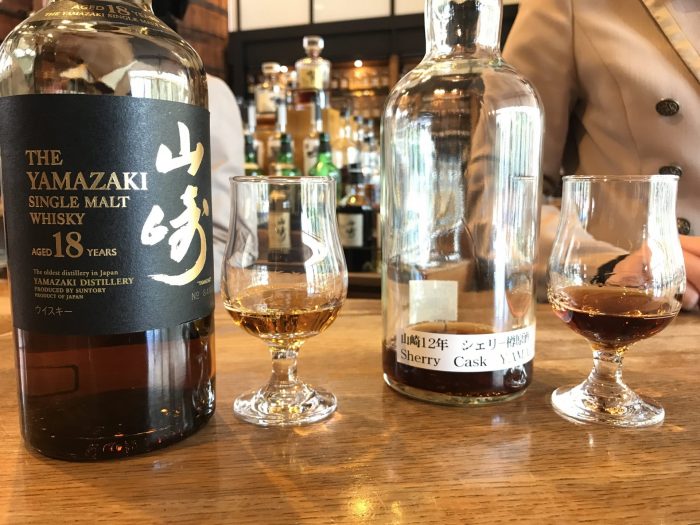 But at just ¥300 for a 15ml taste, it was good enough for me. So good that I had another one before I left. Ok, fine, I had a double before I left, along with a 17 year Hibiki Sherry Cask. 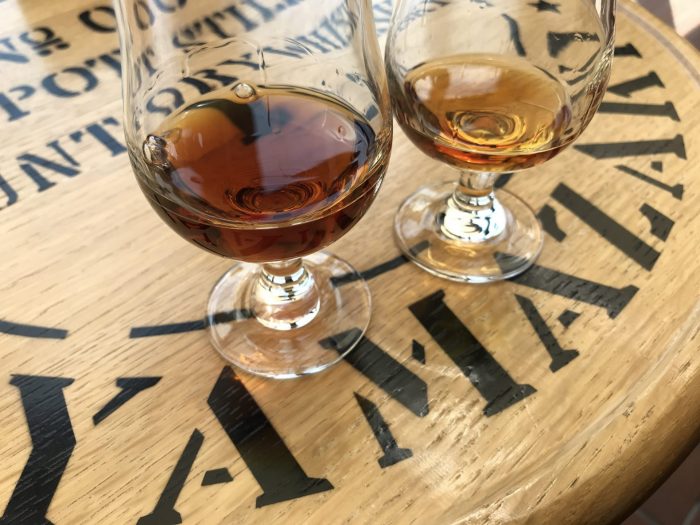 While the tasting room has plenty of space, there’s also a sunny patio where you can drink a dram & contemplate your surroundings. On one hand this is a factory, but on the other, it feels like a special place. 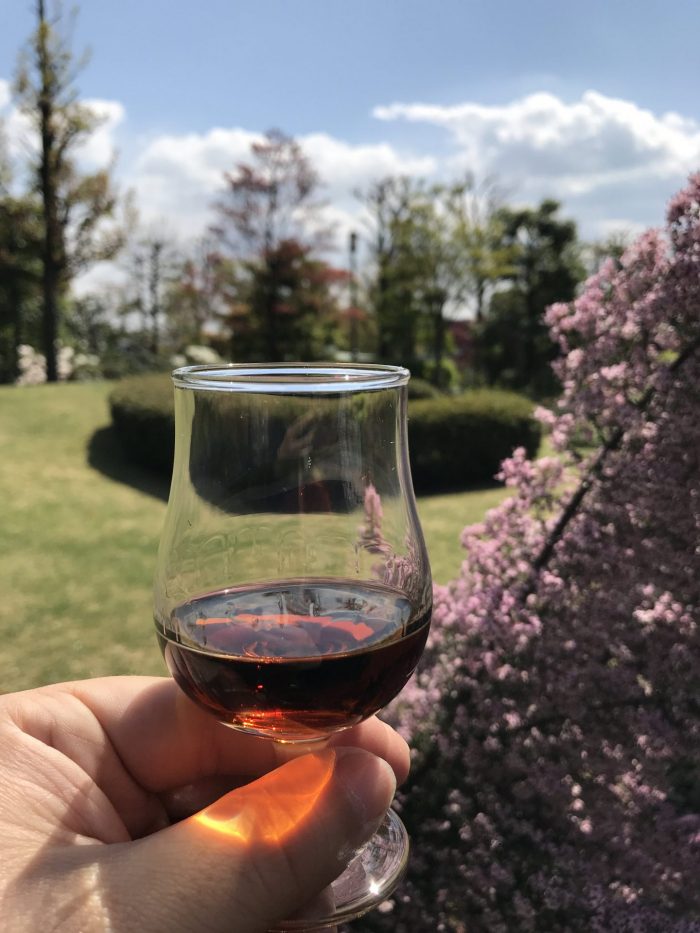 Honestly, had I not made plans to view the cherry blossoms in Kyoto that afternoon, I could have easily spent all day at Yamazaki Distillery before stumbling onto a train back to Osaka. Their whiskey is that good, and getting to try different varieties, including the famed sherry oak cask, was a dream come true.

Visiting the Yamazaki Distillery in Japan is a bucket list item for any whiskey fan. It’s easy to get to from Kyoto or Osaka. Even if you’re not able to book a full tour, it’s still nice to visit the tasting room & try rare Yamazaki editions you might not be able to find elsewhere, especially as Japanese whisky grows in popularity.

To continue the story of Japanese whisky, you can also visit the famous Nikka Distillery near Sapporo.

If you’re looking for a place to stay, check out these Kyoto hotels & Osaka hotels.