Two travel stories have made me angry this week.

In the first incident, actress & musician Vanessa Hudgens & and her boyfriend allegedly carved their names into the famous red rocks of Sedona, Arizona in Coconino National Forest. She then posted a photo of the carving on her Instagram account, saying “Happy Valentine’s Day boo boo bears,” but it was deleted, presumably after the outcry over her destroying a natural wonder started to gain steam. The incident is being investigated, but it could draw a heavy punishment, as The AV Club says, “defacing a natural feature on U.S. Forest Service land is a crime punishable with a potential $5,000 fine and up to six months in jail”. 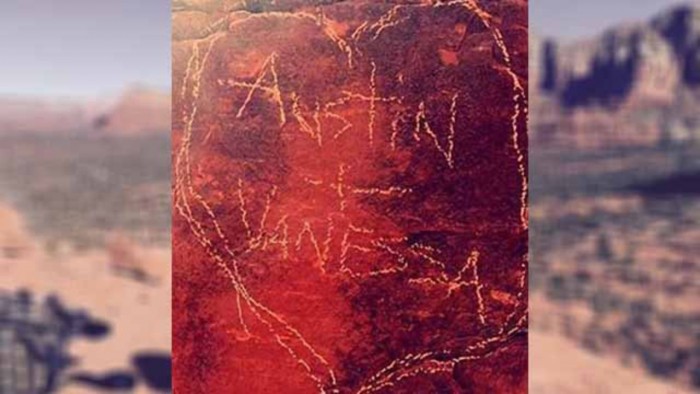 The Telegraph has the story & video, and the story has been widely shared on social media to worldwide outrage.

In an effort to avoid instances such as these, Iceland is actually developing a tourist education program to teach visitors about local cultural customs and respect for the environment.

Responsible hikers and travelers are familiar with a couple of phrases: “take only pictures, leave only footprints”, and “pack it in, pack it out.” As a logical extension of these rules to live by, travelers should also strive to only observe nature, and not destruct it. This means no drawing or carving on rocks, and no taking animals out of their homes. People shouldn’t need to be told this, but apparently they do.

Respect the environment & local customs, and don’t find yourself going viral for doing something stupid like the people mentioned above.