Home
Travel Guides
Europe
Portugal
Lisbon
A tour of Belem and the Age of Discovery in Lisbon, Portugal

No trip to Lisbon is complete without a day trip to Belém. Belém was a crucial port during the Age of Discovery. Today it is home to a UNESCO World Heritage Site. Whatever your thoughts are on global sea exploration & its ensuing colonization of the world, Portugal played a large role in it. In order to get a full historical perspective on this time, it helps to get the expertise of a tour guide when you go to Belém. When I visited Lisbon, I was a guest of Context Travel on a tour called “Belém and the Age of Discovery.”

A tour of Belem and the Age of Discovery in Lisbon, Portugal

Context’s tours are run by experts who have higher-level education in related fields. This helps travelers get a deeper background in the place they are visiting. In my case, my tour was given by Bren, who had a background in Imperial Studies.

I arrived a little bit early to Belém, so I explored the gardens right across the street from where the tour was set to meet. Despite tour bus crowds everywhere else in Belém, the gardens were nice and quiet, plus they had plenty of shade. There was even a beer cart from a local Lisbon craft brewery called LX Brewery. 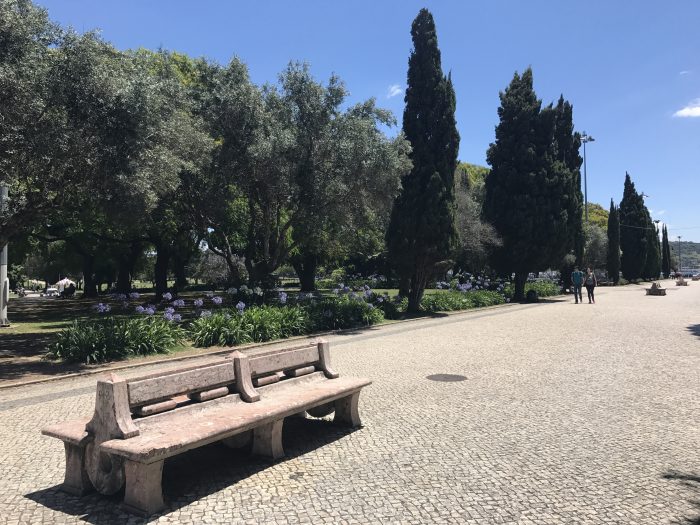 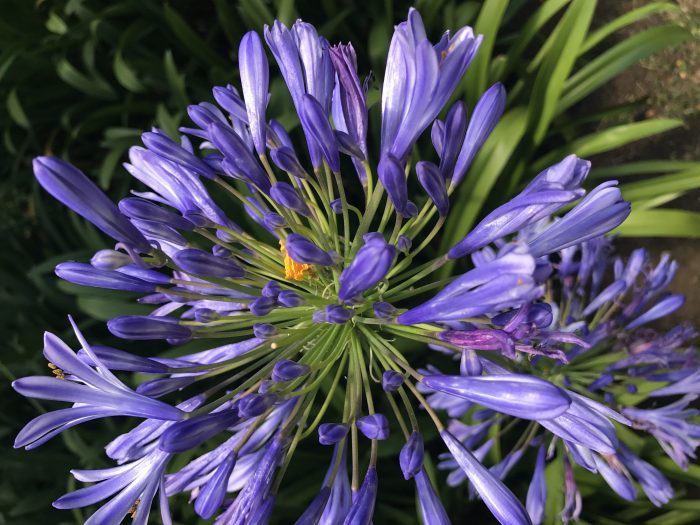 The 3-hour Belém tour met at a bakery called Pasteis de Belém. There were 3 of us on the tour: myself and a couple from Kansas City. In addition to being run by experts, Context Travel also keeps the groups small. As a result, it never feels like you are on a group tour. 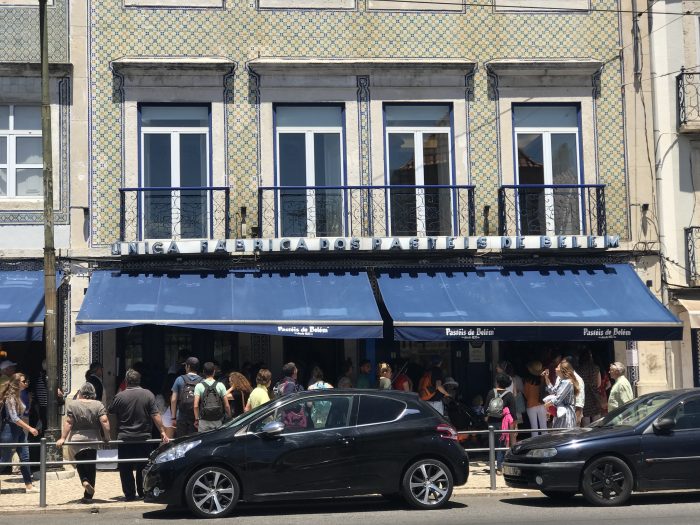 Starting a tour like this at Pasteis de Belém is a brilliant idea. First off, it’s a destination on its own. The famous pastel de nata, which you will have a dozen of while you are in Portugal if you are doing your trip right, was born here in Belém. The recipe began in the early 1800s when monks from the Jerónimos Monastery began selling them to make money. They used sugar from a local sugar refinery and egg yolks that were leftover from eggs that had been used for starching clothing. Pasteis de Belém was then founded across the street in 1837. They are the best I had in Portugal, and trust me, I tried a lot. 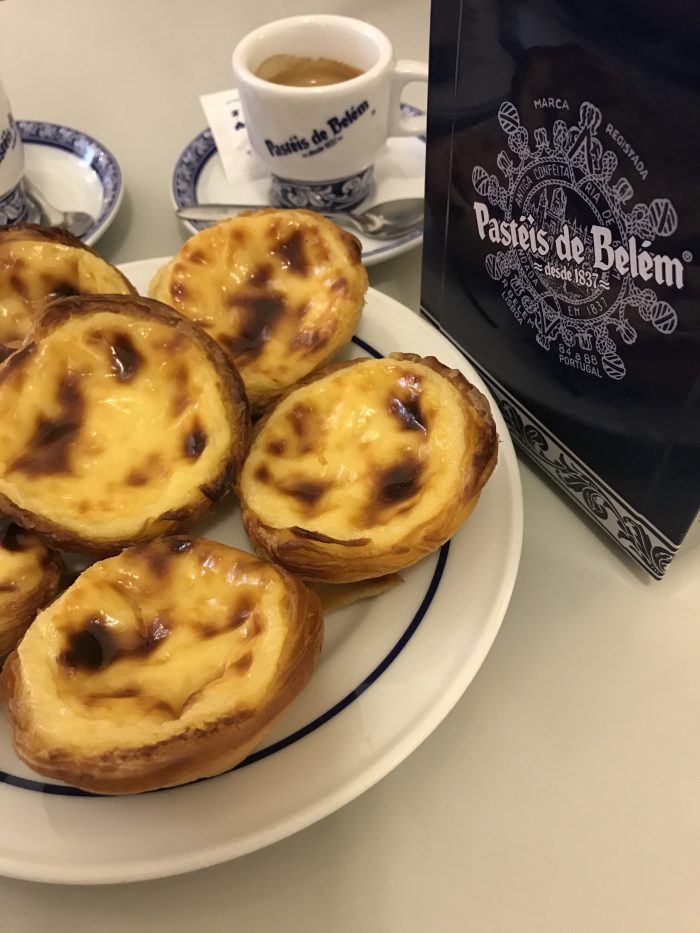 Sitting down and having pasteis de nata at Pasteis de Belém allowed us to get an introduction to our day while not standing around or being on the move. It’s a clever way of getting to know your guide and the tour group. Plus, sitting inside allows you to skip the massive queues outside. Bren gave us an overview both of Belém (which means Bethlehem) as well as its ties to the colonial period, from Brazil to Goa, India, while we ate.

Our next stop was Jerónimos Monastery. The monastery was built in the 1500s, right during the Age of Discovery. The purpose of the monastery was to provide spiritual support to the explorers who were sailing out of Belém. 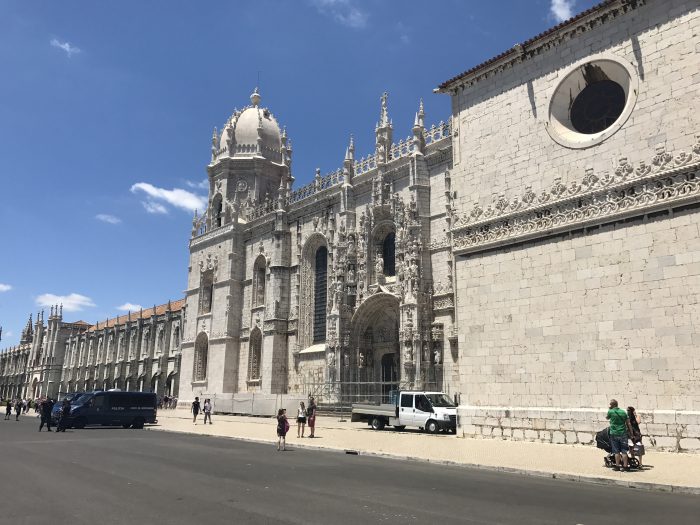 Vasco de Gama spent a night at the church that was originally on the same site in 1497 before departing on his historic sea voyage. He is now entombed at Jerónimos Monastery. 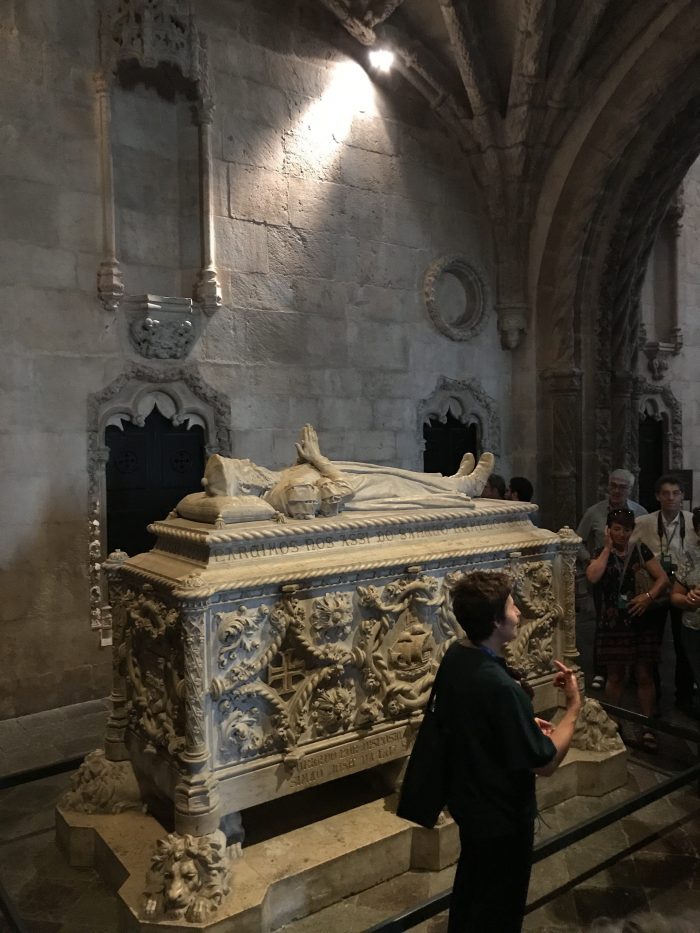 The monastery also includes the tomb of Alexandre Herculano, known as the Father of Portuguese History. There is a summary of his historical writing as well. 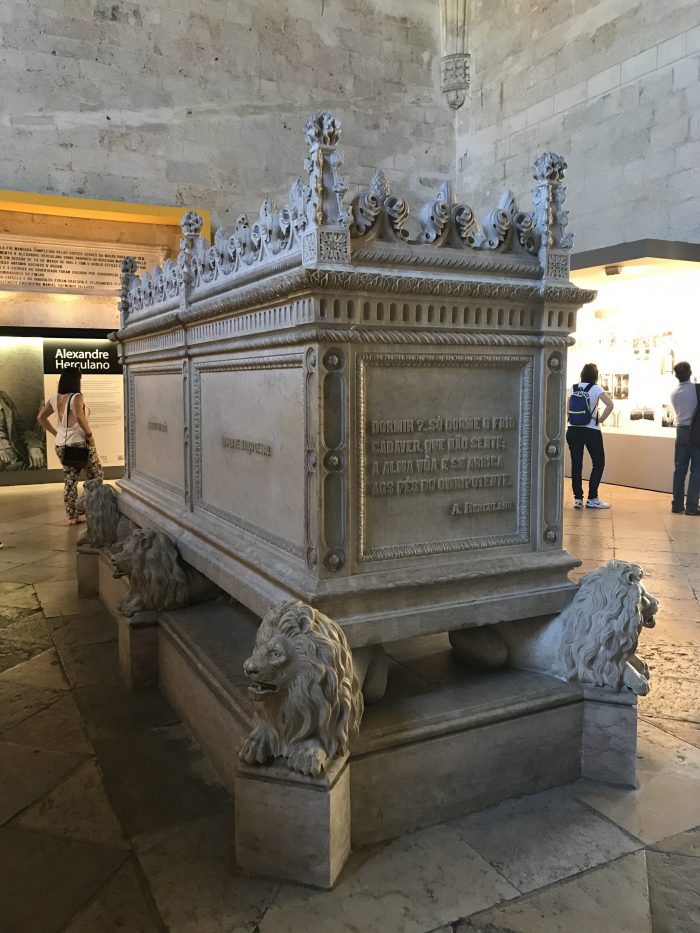 The layout of the monastery is interesting. It’s very open, but it still has lots of interesting architectural details. Elements such as Indian elephants tie Portugal to the places explorers visited. 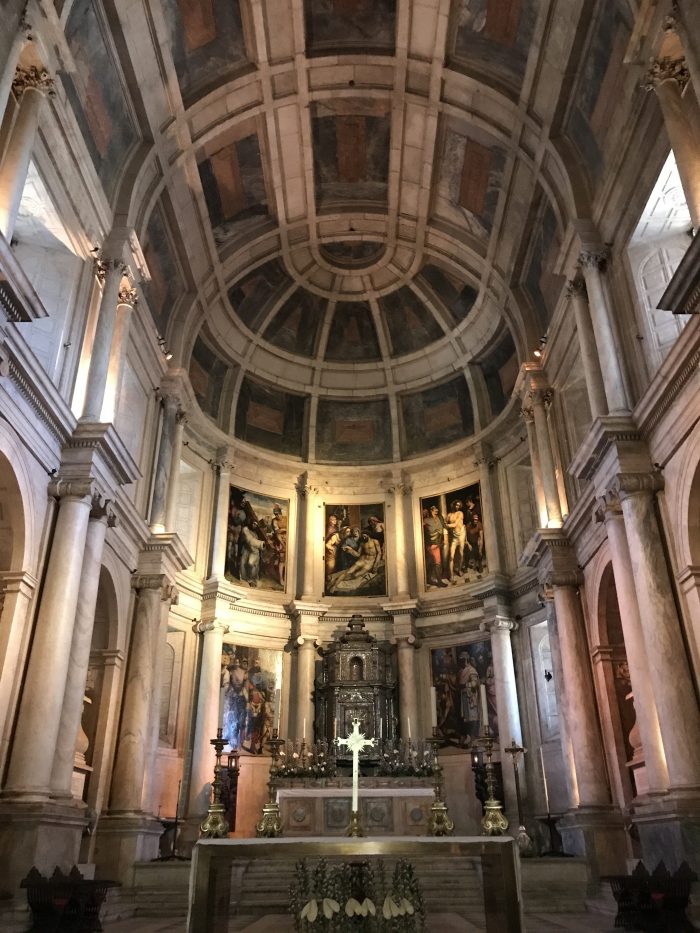 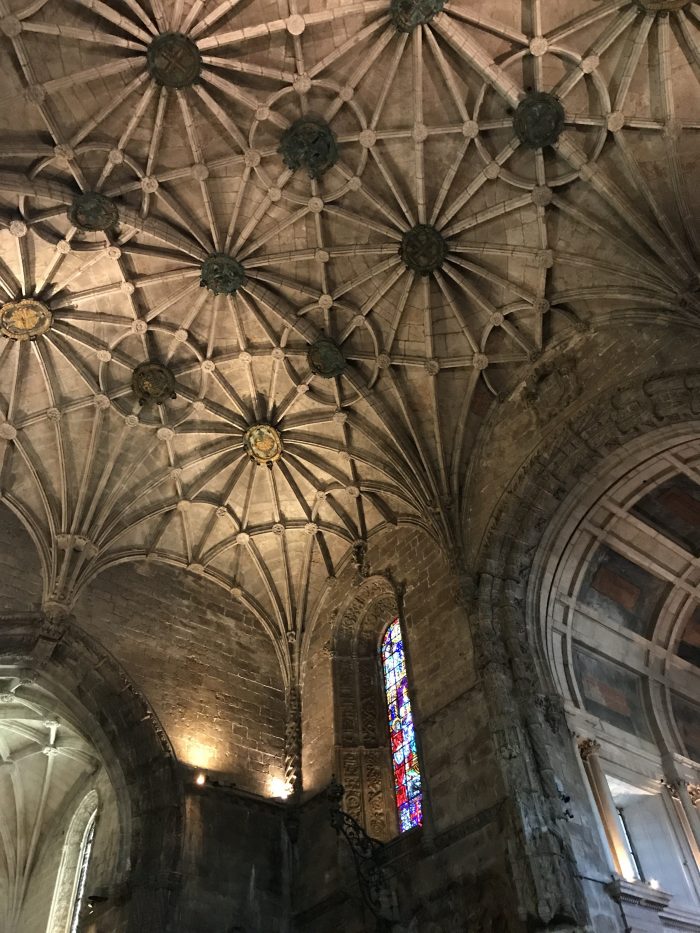 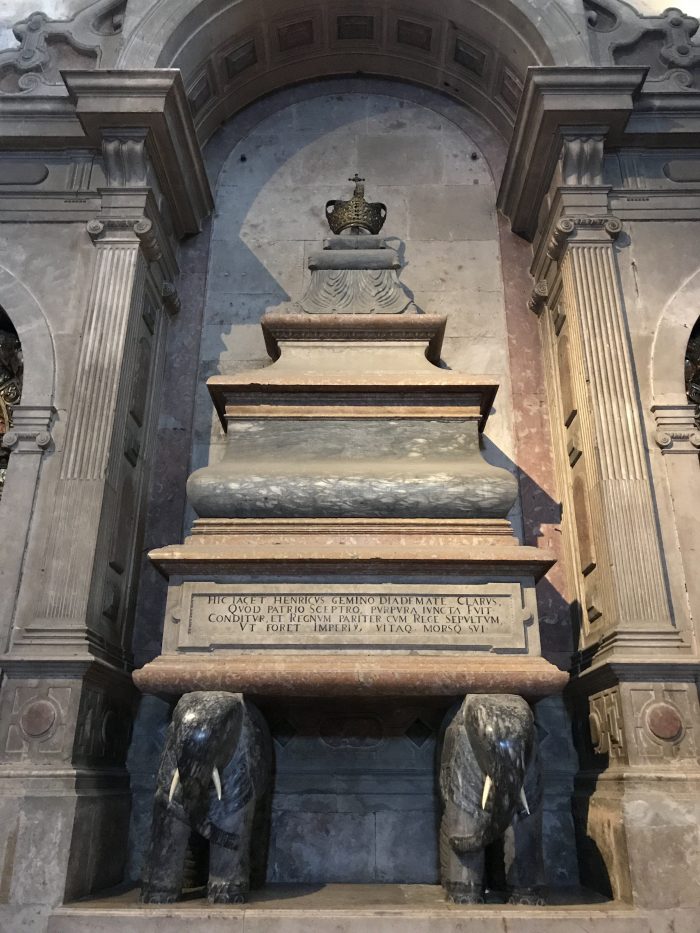 The cloisters of Jerónimos Monastery are also gorgeous. Again, there’s an openness to it all, with intriguing detail. Also, I couldn’t help but think the courtyard would make for an excellent baseball diamond. 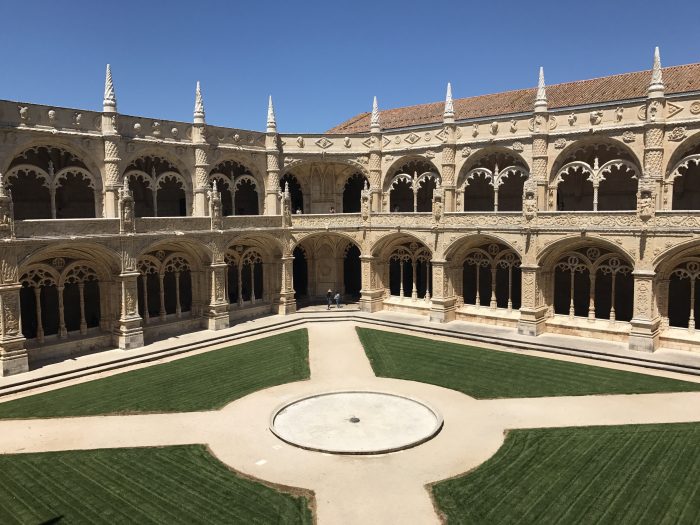 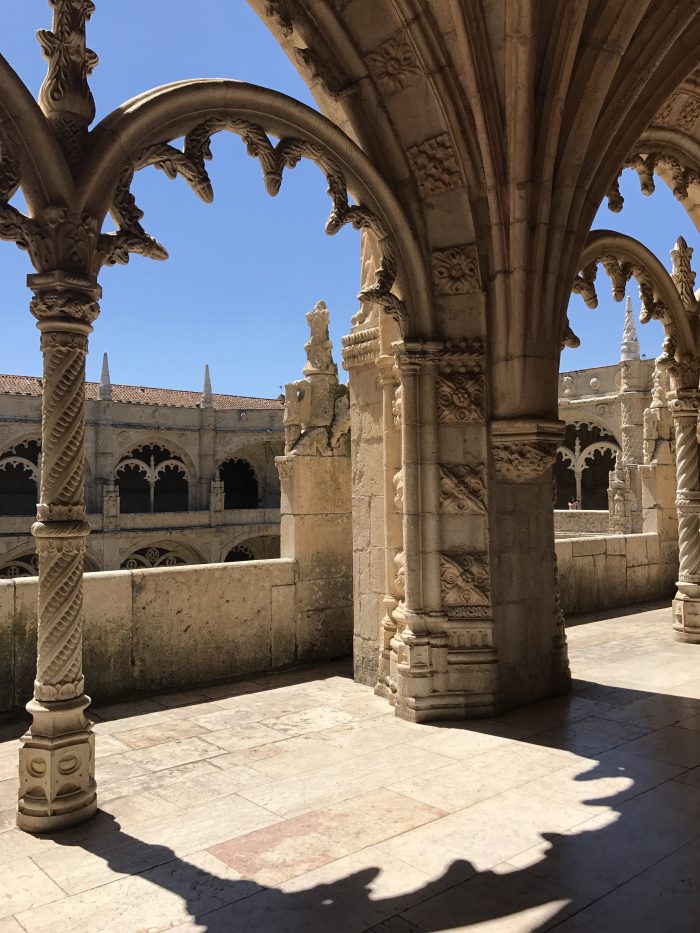 Another interesting note from Jerónimos Monastery: the monks would sing for 7 hours a day in choir, then go hang out outside. That’s a lot of singing each day. I wonder if that much practice helps your voice over time or if it completely destroys it? 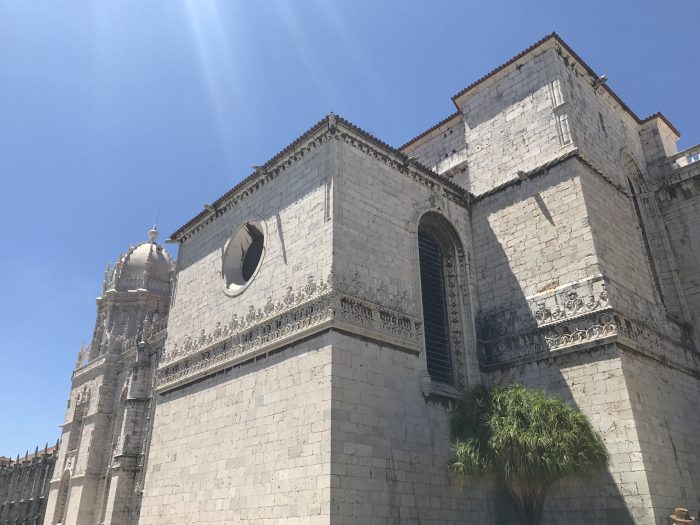 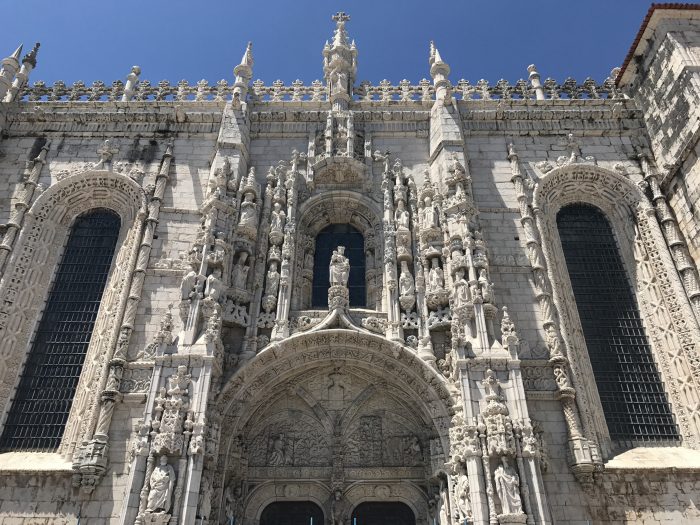 Monument to the Discoveries

From Jerónimos Monastery we set off toward the Monument to the Discoveries. It was a hot day, so we stopped for ice cream in the gardens. I had a Cornetto, since the guide reminded me a bit of Simon Pegg.

The Monument to the Discoveries is an impressive work that is self-explanatory from the name. It is a monument to all of the explorers who set off from Belém & “discovered” the rest of the world. 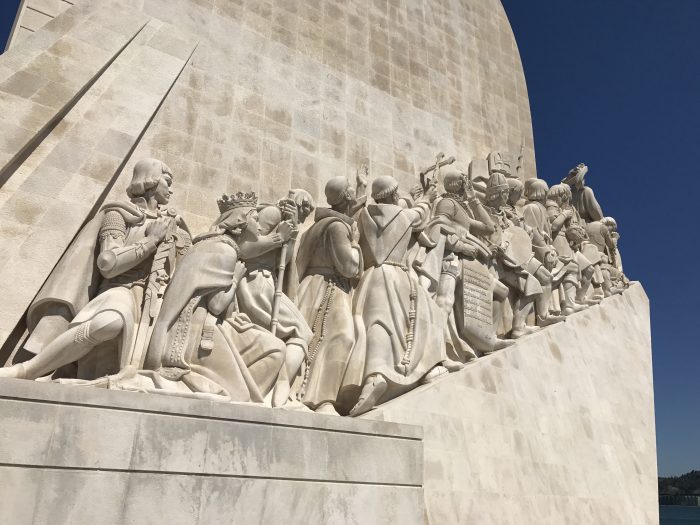 The design of the monument is based off of coastal marking stones that marked and claimed territory for Portugal. These stones were carried on ships as they sailed around the world.

A total of 33 people are on the Monument to the Discoveries. In addition to seafarers such as Vasco de Gama, Bartolomeu Dias, and Ferdinand Magellan, there are also other important figures from the era. Their faces all look off toward the sea. 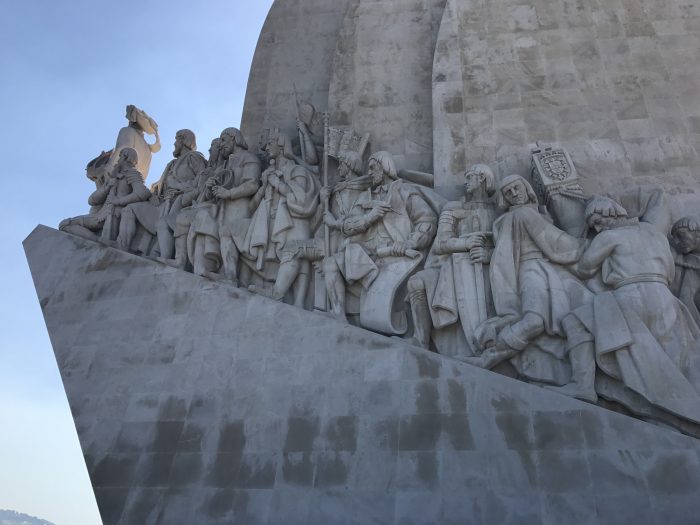 The final stop on our tour was Belém Tower. Belém Tower (also known as St. Vincent Tower) served as part of Portugal’s coastal defense system. It was built on a little island off the shore of the Tagus River. At various points during its history it served as a prison and a customs house. Nowadays it’s open for tours. 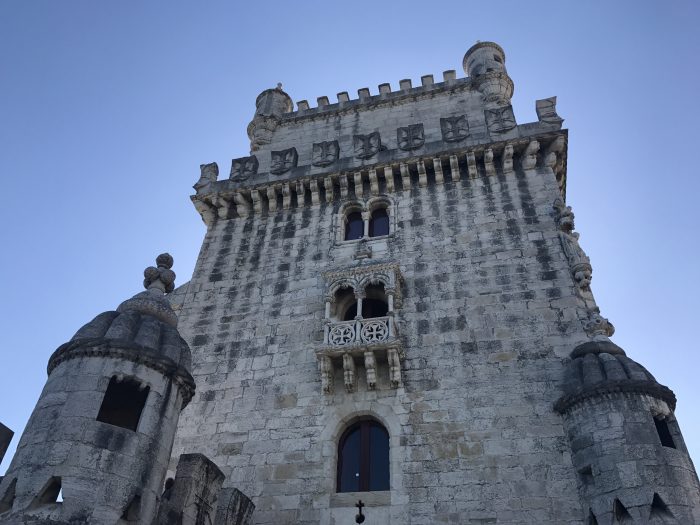 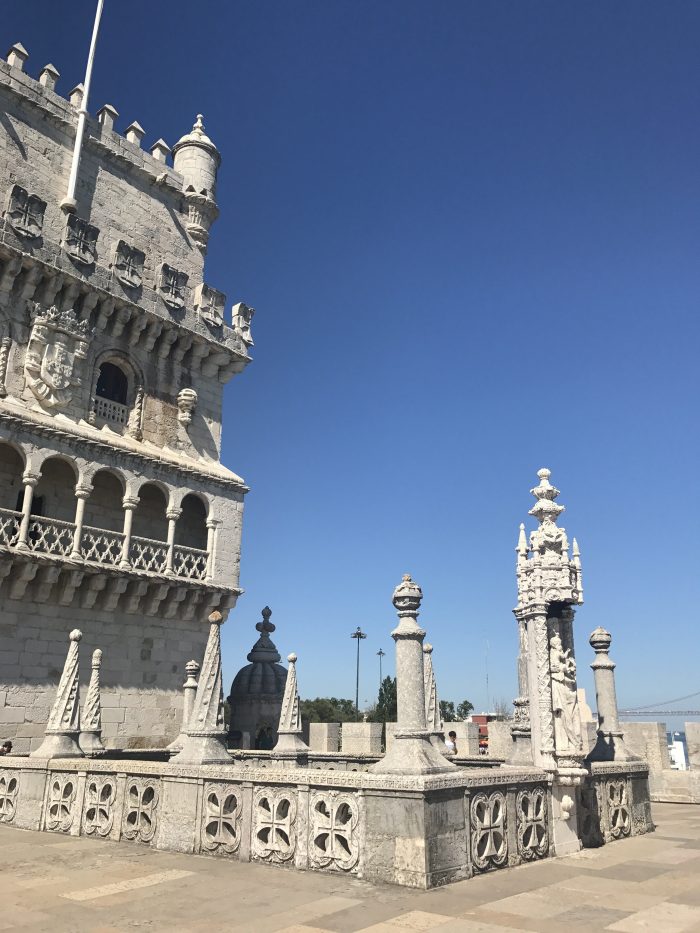 It was here that the day became a bit of a fiasco, through no fault of our tour guide. 120 people at a time can go up to the top of Belém Tower. The other couple in my tour didn’t feel like going up, so I left everyone behind to go. I was one of the first people in the queue to go up as part of the next set, which was supposed to go in 15 minutes.

Unfortunately, the queue was managed terribly. The people working at Belém Tower did nothing about queue jumpers, and let the previous group stay up for an hour without sending them down. After about 30 minutes, the rest of us began to follow the queue jumpers, since it wasn’t fair that we were waiting around. However, then they finally decided to manage the line. They wouldn’t let anyone else up or down the tower, so we were stuck in an interior passageway.

Eventually, I made it up to the top of the tower. Honestly, it wasn’t all that remarkable. The view is fine, but there’s not a ton to see around you. Perhaps the fiasco of getting to the top soured me on it. But really, it wasn’t worth that wait. 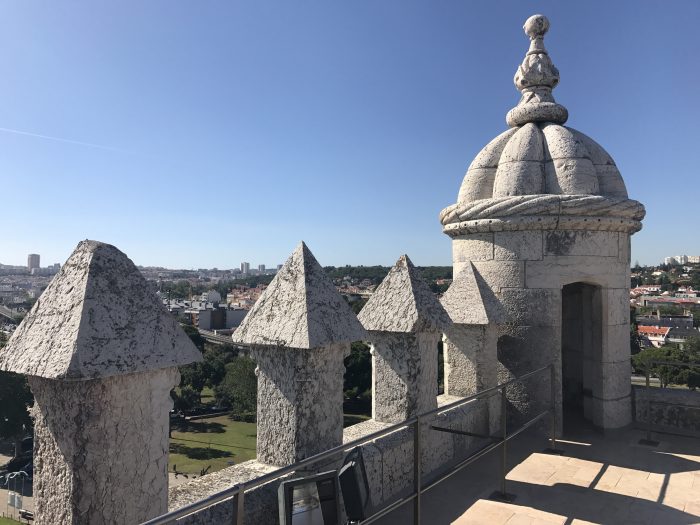 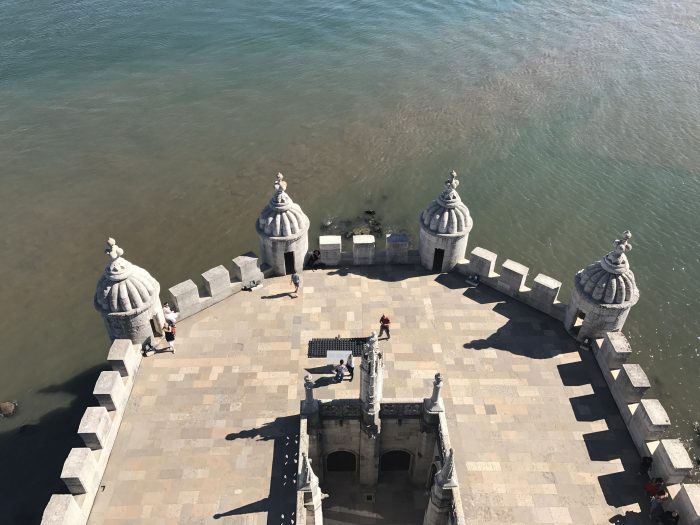 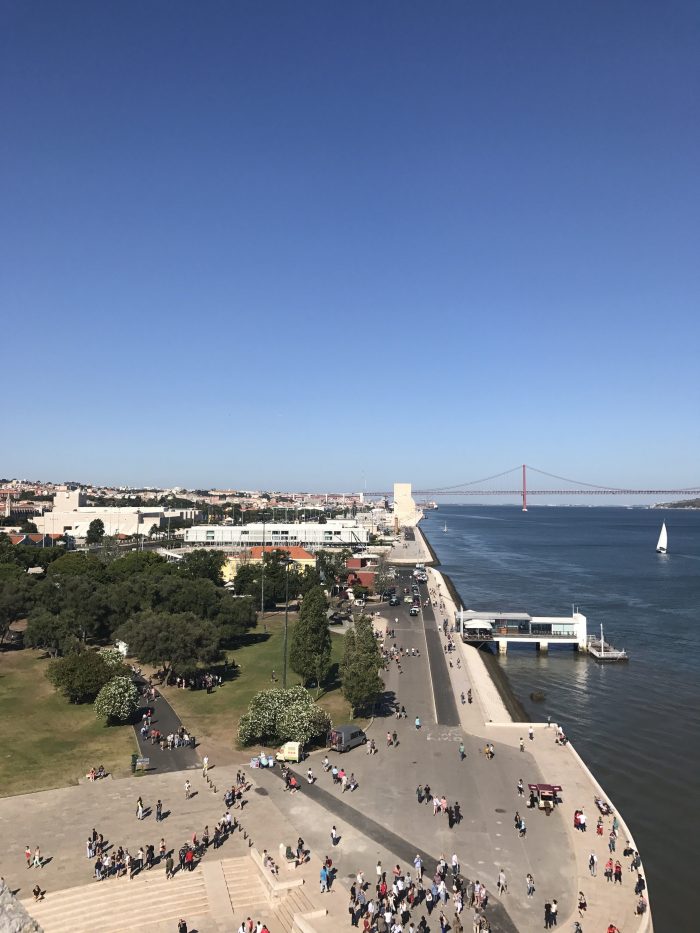 Since I was stuck, I had no way of reaching the group to let them know what was going on. Thankfully it was the last stop of the day, so I didn’t miss anything, but I felt bad that I didn’t get to say goodbye.

Then, to continue the hour from hell, there was a complete transit meltdown. None of the trams back to Lisbon were running. There were huge crowds of people at the Belém stop. They had no idea what to do. 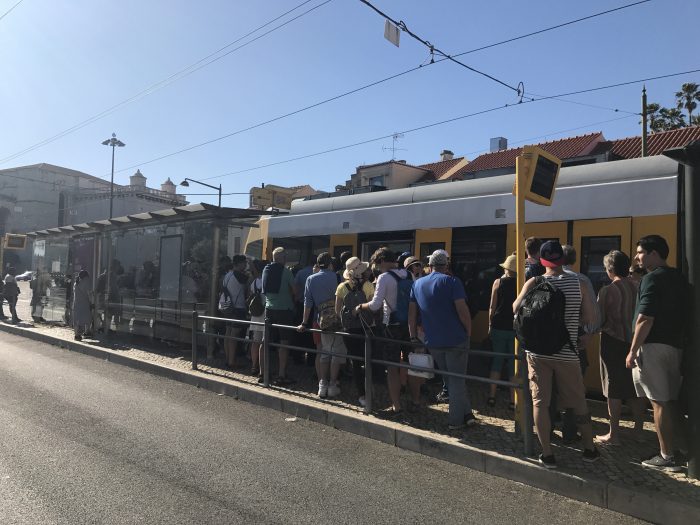 Here’s where Google Maps came in handy. I figured out which bus line from that same stop would get me back to Lisbon. Then I walked uphill to where the bus would be coming from, so I could then beat the crowds that were trying to get on buses. Now that’s the smart way of “jumping” the queue.

That last hour aside, a day trip to Belém makes for a great way to learn more about Portuguese history. While you can learn on your own, I appreciated that I was able to get a deeper understanding through my Belém tour with Context Travel.

Note: I took this tour of Belém and the Age of Discovery as a free guest of Context Travel. All opinions are 100% my own. 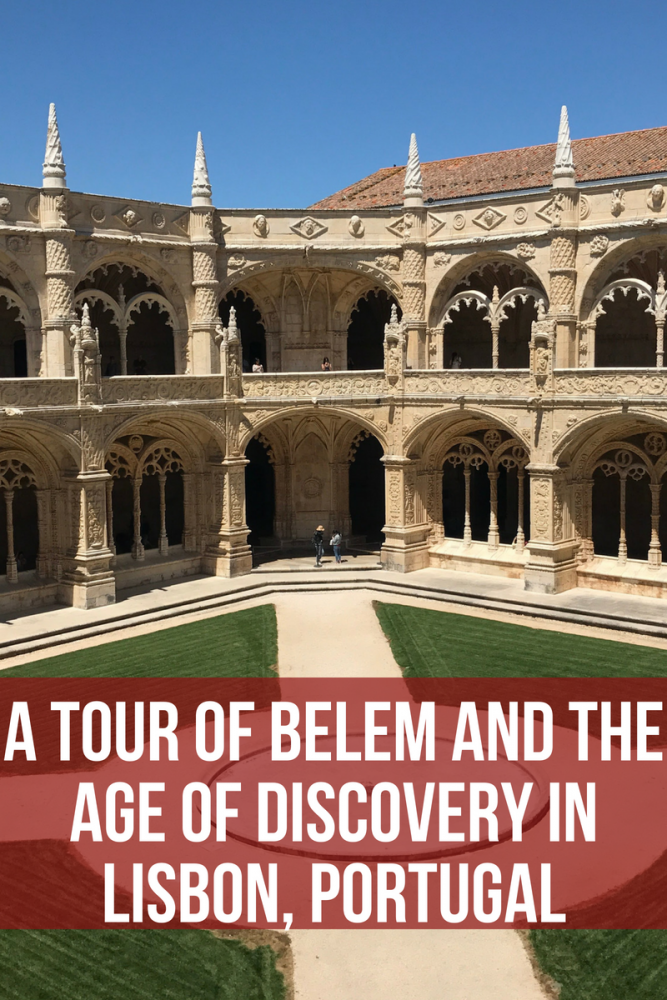